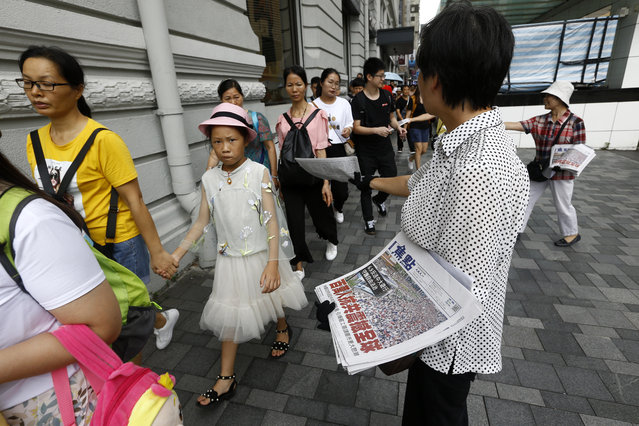 Hong Kong women distribute newspapers with the headlines “Millions against Communist China shock the world” in a shopping district popular with mainland Chinese tourists in Hong Kong Sunday, July 7, 2019. A march was to go through a popular shopping area for Chinese tourists and end at a high-speed rail station that connects the city to the mainland. (Photo by Andy Wong/AP Photo) 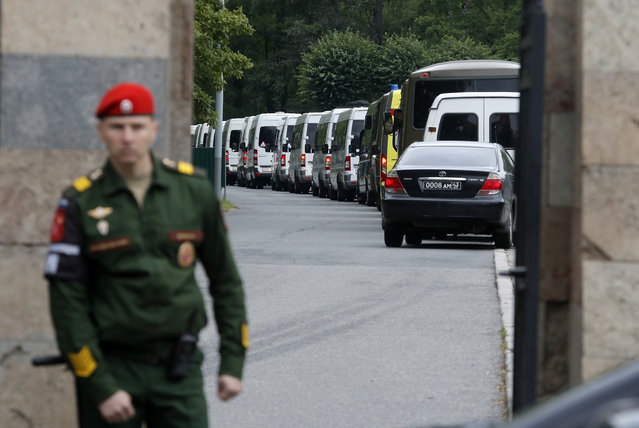 Buses carrying bodies of the 14 crew members who died in a fire on a Russian navy's deep-sea research submersible, drive to the Serafimovskoye memorial cemetery during a funeral ceremony in St. Petersburg, Russia, Saturday, July 6, 2019. Russian President Vladimir Putin has awarded the nation's highest honors to 14 seamen who died in a fire on one of the navy's research submersibles. (Photo by Dmitri Lovetsky/AP Photo) 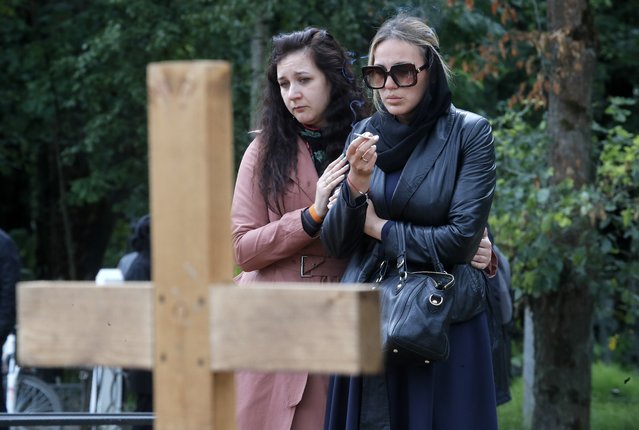 Two women mourn at the grave of one of the 14 crew members who died in a fire on a Russian navy's deep-sea research submersible, at the Serafimovskoye memorial cemetery during a funeral ceremony in St. Petersburg, Russia, Saturday, July 6, 2019. (Photo by Dmitri Lovetsky/AP Photo) 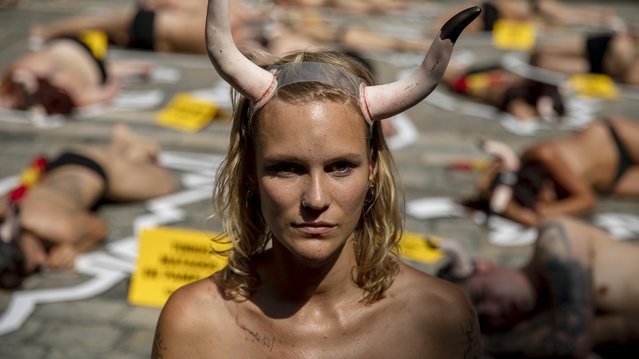 An animal rights activist takes part in a protest ahead of the San Fermin Running of the Bulls at Plaza Consistorial on July 05, 2019 in Pamplona, Spain. Animal rights organizations, People for the Ethical Treatment of Animals (PETA) and Anima Naturalis, organised a creative interpretation of a violence-free San Fermin festival as they call for the abolition of bullfighting. Protesters wearing fake horns and a “banderilla” (the bullfighter's colorful stick) on their back laid on the ground inside the outline of a bull. (Photo by Pablo Blazquez Dominguez/Getty Images) 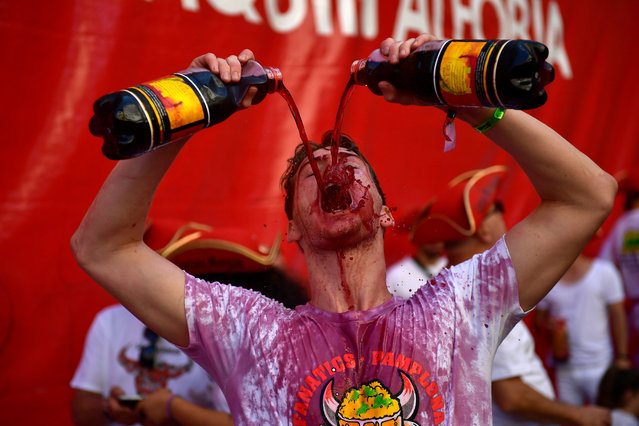 Revellers drink wine as they start celebrating early while waiting for the launch of the “Chupinazo” rocket, to celebrate the official opening of the 2019 San Fermin fiestas with daily bull runs, bullfights, music and dancing in Pamplona, Spain, Saturday July 6, 2019. (Photo by Alvaro Barrientos/AP Photo) 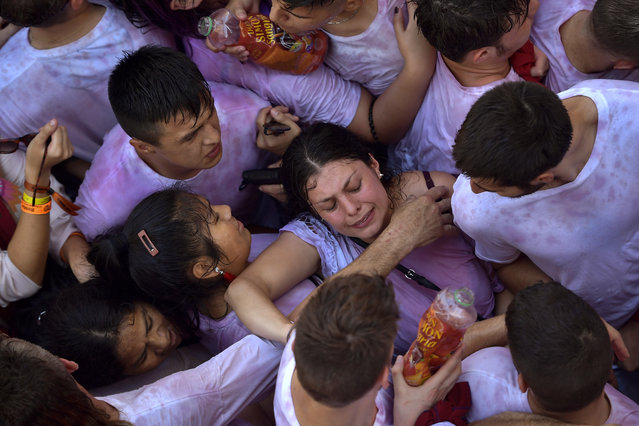 Revellers pack the main square during the launch of the “Chupinazo” rocket, to celebrate the official opening of the 2019 San Fermin fiestas in Pamplona, Spain, Saturday July 6, 2019. The blast of a traditional firework opened Saturday nine days of uninterrupted partying in Pamplona's famed running-of-the-bulls festival. A member of the northern city's official brass band was chosen for this year's launch of the rocket, known as the “Chupinazo”, to mark 100 years since the local ensemble's foundation. (Photo by Alvaro Barrientos/AP Photo) 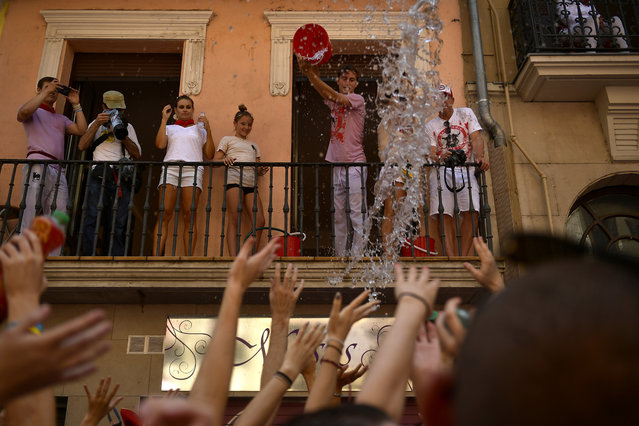 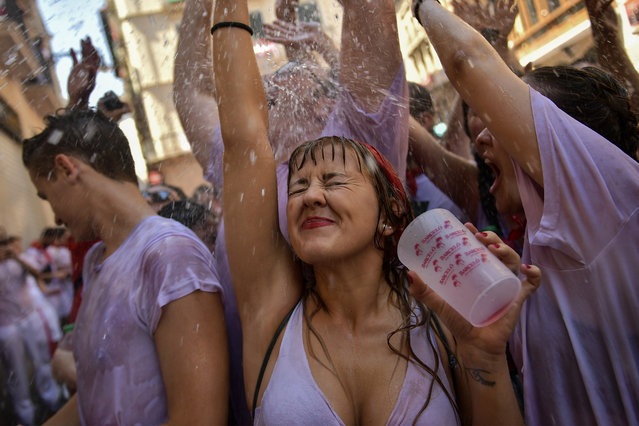 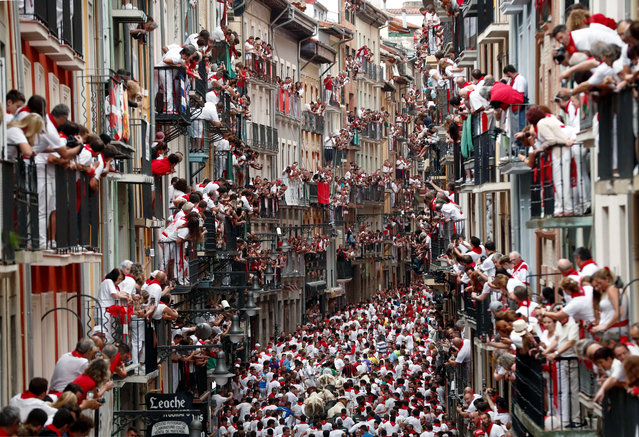 Runners try to avoid bulls as they run down a street during the traditional San Fermin bull run in Pamplona, Spain, 07 July 2019. The festival, locally known as Sanfermines, is held annually from 06 to 14 July in commemoration of the city's patron saint. Hundreds of thousands of visitors from all over the world attend the fiesta, with many of them physically participating in the highlight event – the running of the bulls, or encierro. (Photo by Villar Lopez/EPA/EFE) 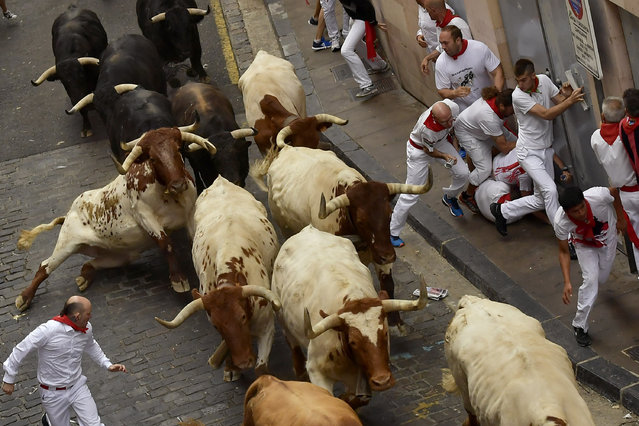 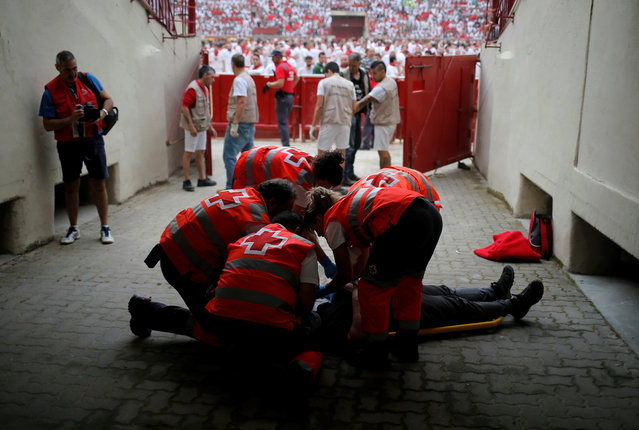 An injured reveller is helped by medical staff during the first running of the bulls at the San Fermin festival in Pamplona, Spain, July 7, 2019. (Photo by Jon Nazca/Reuters) 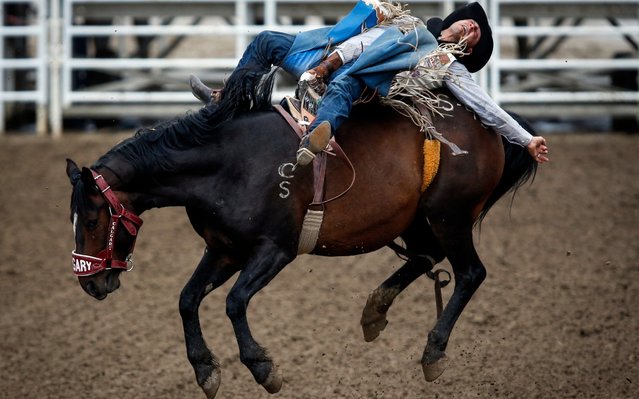 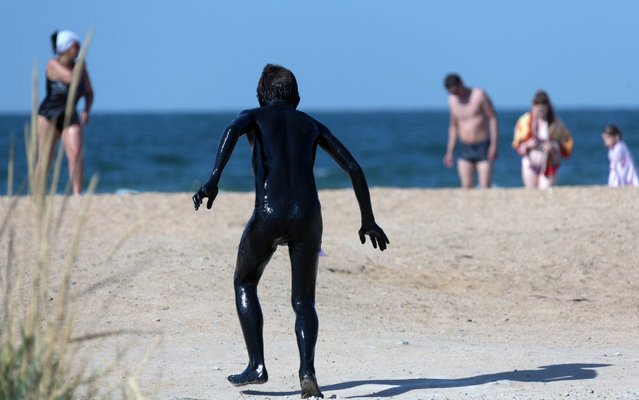 A child covered in mud on Lake Chokrak near the village of Kurortnoye, Leninsky District of Crimea in Russia on July 4, 2019. (Photo by Sergei Malgavko/TASS) 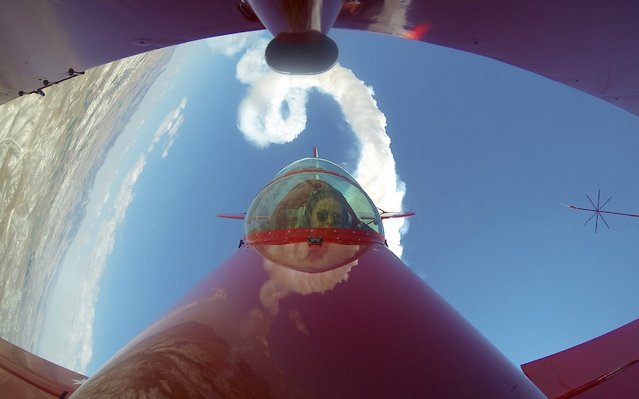 A photo shows Turkey's first professional female acrobatics pilot Semin Ozturk Sener performing the first airshow of the year within the “Sivrihisar Airshow” in the memory of air martyrs, in Sivrihisar district of Eskisehir, Turkey on July 06, 2019. (Photo by Ali Atmaca/Anadolu Agency/Getty Images) 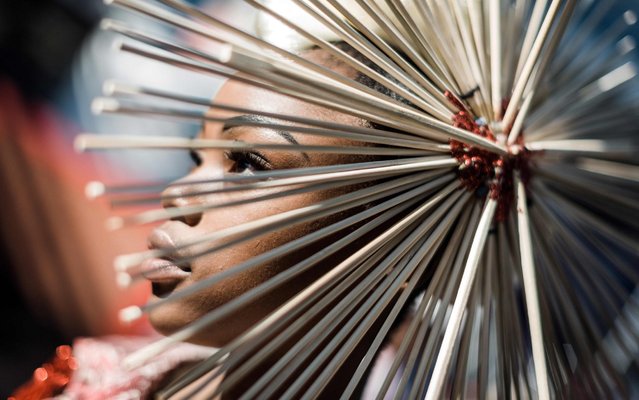 A model presents a creation by local designers during a fashion show at the 2019 editon of the Vodacom Durban July horse race in Durban, on July 6, 2019. The Vodacom Durban July race is the biggest horse racing event on the African continent and a high social event where South African celebrities dress up and watch the race. The race attracts close to 100,000 spectators. (Photo by Rajesh Jantilal/AFP Photo) 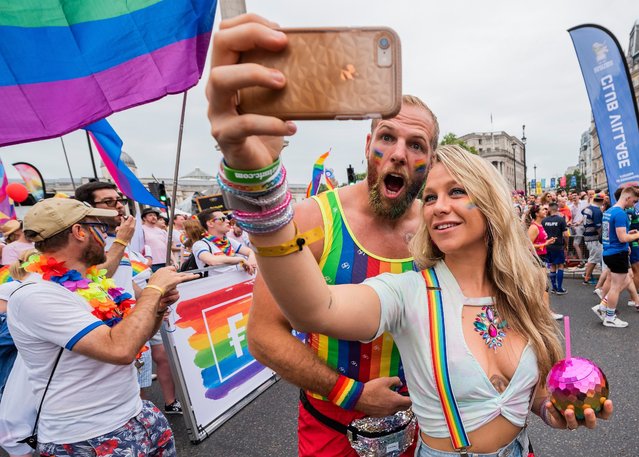 James Haskell and Chloe Madeley taking a selfie in front of the crowd in the annual Pride Parade in London on July 6, 2019. (Photo by Guy Bell/Rex Features/Shutterstock) 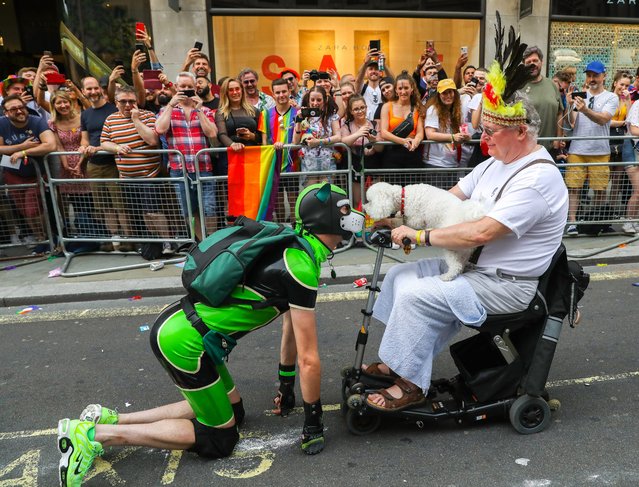 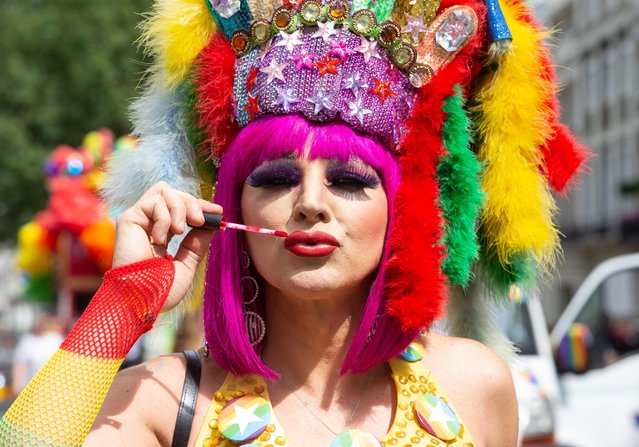 Paraders party on Portland Place at the 2019 Pride parade in London, England, on July 6, 2019. This year marks the 50th anniversary of the 1969 Stonewall riots in New York, an uprising sparked by a police raid on a gay club, the Stonewall Inn, in Greenwich Village. The riots are often seen as the moment that set in motion the modern gay rights movement, in the US and beyond. (Photo by Alamy Live News)
Edit Del
08 Jul 2019 00:05:00, post received 0 comments
Publication archive:
←   →
Popular tags:
All tags
Last searches: