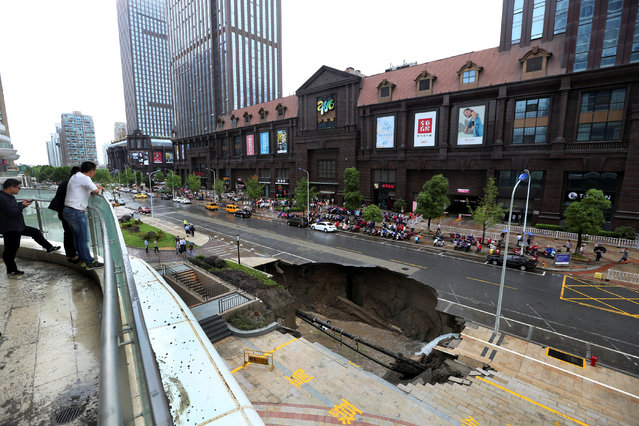 People look at the part of road that collapsed in Nantong, Jiangsu province, China June 10, 2017. Picture taken June 10, 2017. There are no casualties and the cause of collapse is under investigation, local media reports. (Photo by Reuters/Stringer) 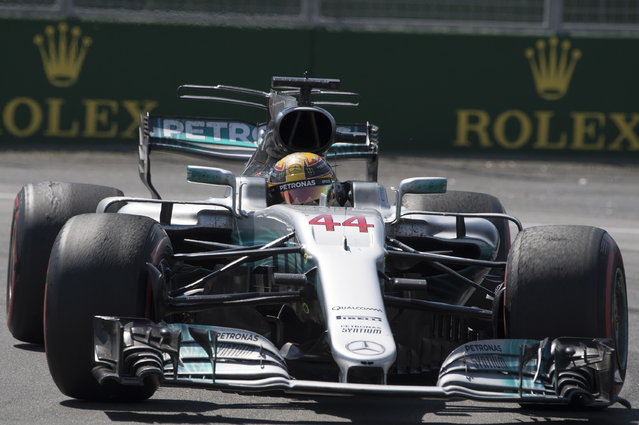 Mercedes driver Lewis Hamilton (44), of Britain, steers his car at the hairpin turn during the Formula One Canadian Grand Prix in Montreal on Sunday, June 11, 2017. (Photo by Jacques Boissinot/The Canadian Press via AP Photo) 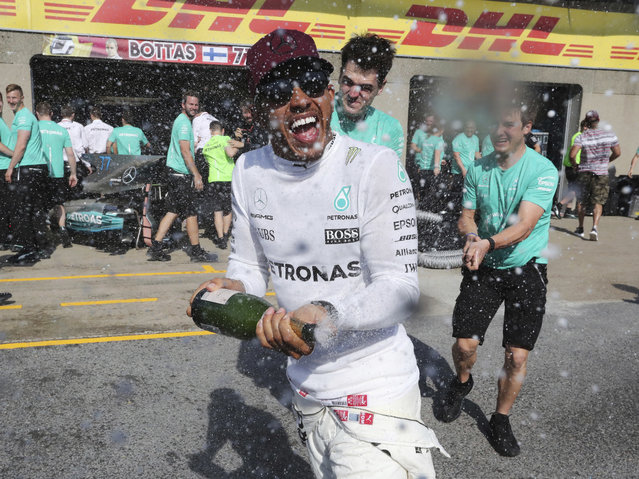 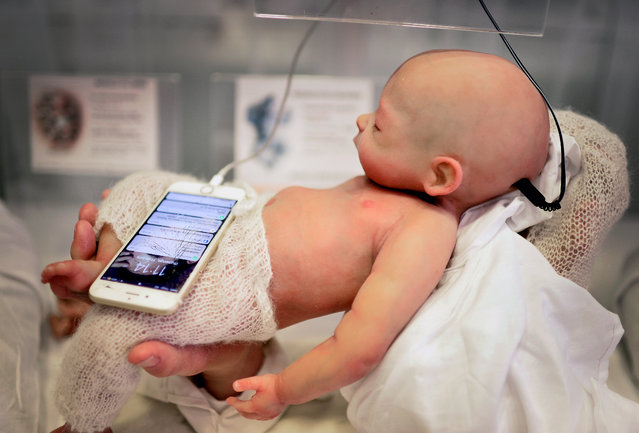 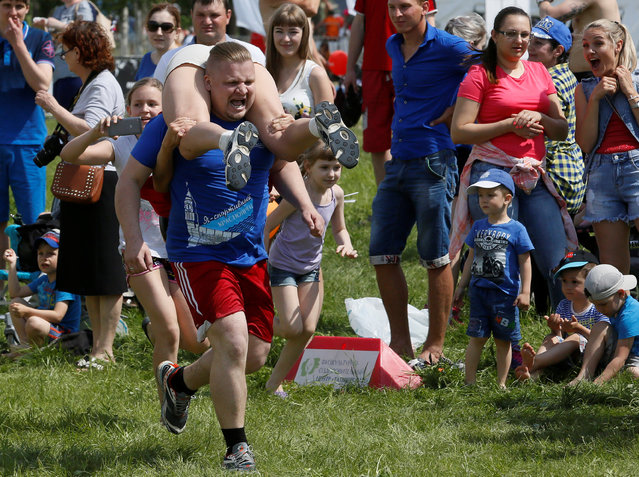 A man carries his wife over an obstacle while racing in the Wife Carrying competititon to mark the City Day in Krasnoyarsk, Siberia, Russia, June 10, 2017. (Photo by Ilya Naymushin/Reuters) 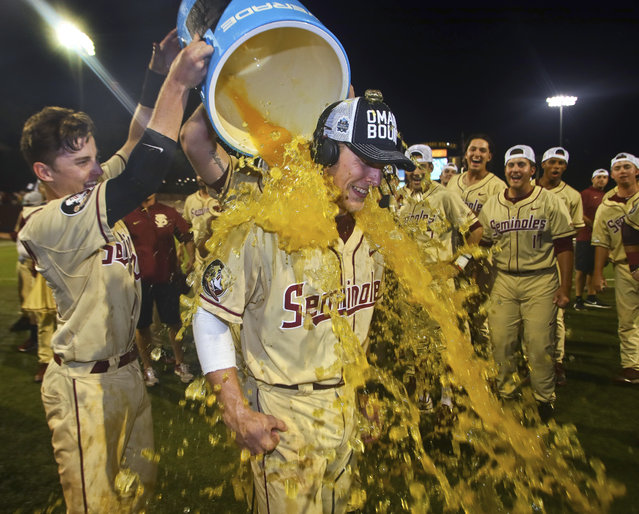 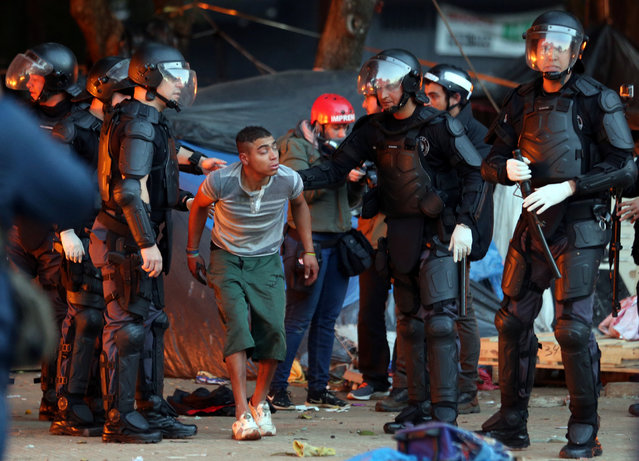 Riot police carry out an operation in a neighborhood known to locals as Cracolandia (Crackland), in downtown Sao Paulo, Brazil June 11, 2017. (Photo by Paulo Whitaker/Reuters) 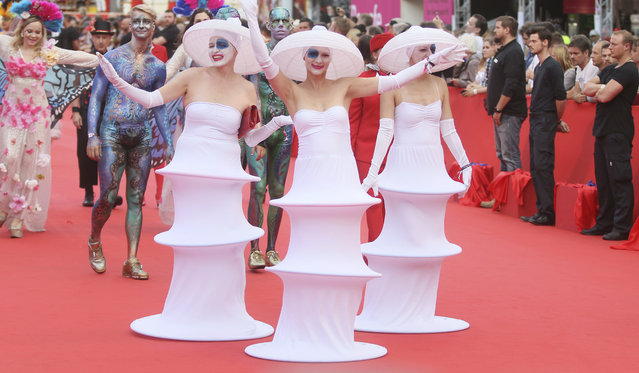 Guests in costumes arrive for the opening ceremony of the Life Ball, in front of the City Hall in Vienna, Austria, Saturday, June 10, 2017. The Life Ball is a charity gala to raise money for people living with HIV and AIDS. (Photo by Ronald Zak/AP Photo) 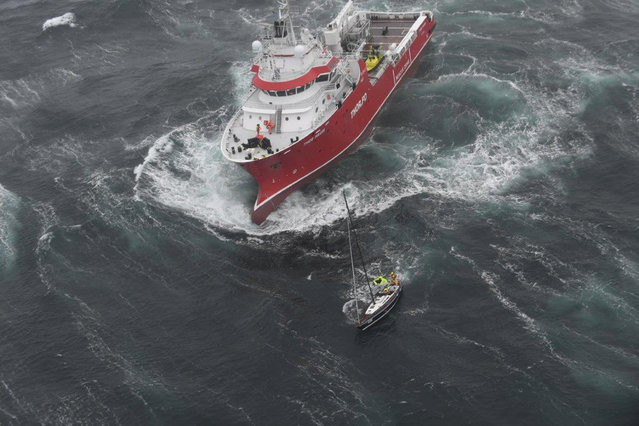 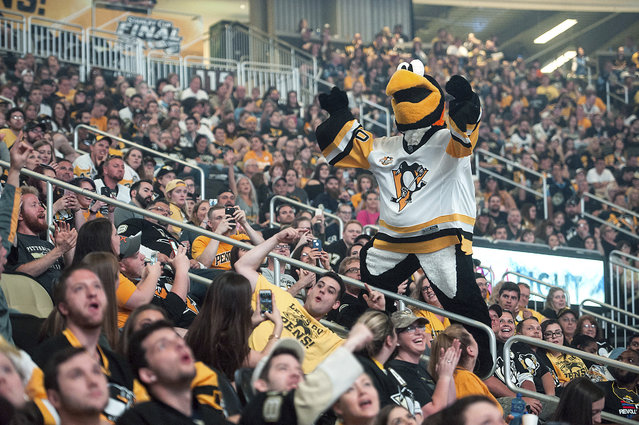 Iceburgh, mascot of the Pittsburgh Pengunis, gestures to fans watching television coverage of the Penguins playing the Nashville Predators in Game 6 of the Stanley Cup final Sunday, June 11, 2017, during a watch party at PPG Paints Arena in Pittsburgh. (Photo by Stephanie Strasburg/Pittsburgh Post-Gazette via AP Photo) 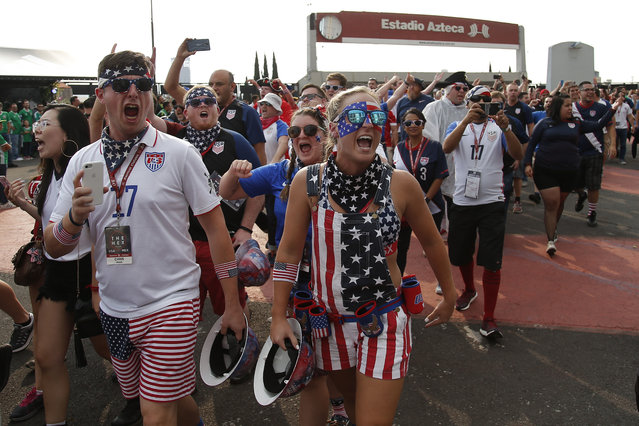 United State's fans arrive to the Azteca Stadium prior to a 2018 Russia World Cup qualifying soccer match between Mexico and the U.S. in Mexico City, Sunday, June 11, 2017. (Photo by Eduardo Verdugo/AP Photo) 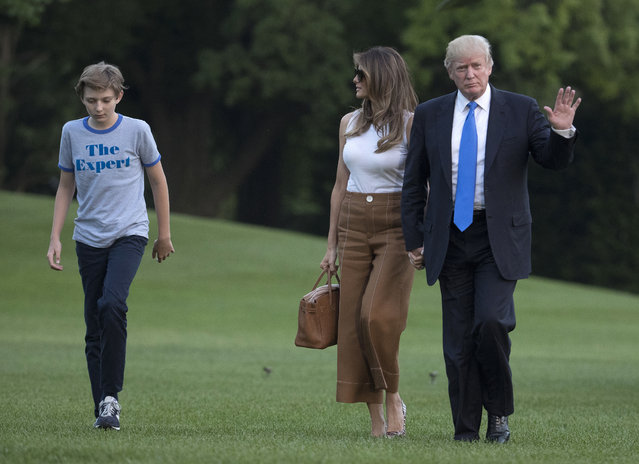 President Donald Trump waves as he walks with first lady Melania Trump and their son, Barron Trump, from Marine One across the South Lawn to the White House in Washington, Sunday, June 11, 2017, as they returned from Bedminster, N.J. (Photo by Carolyn Kaster/AP Photo) 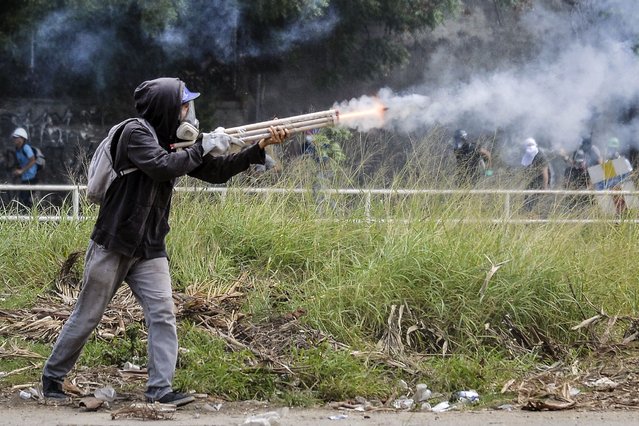 An opposition demonstrator fires an improvised weapon in a clash with riot police during the “Towards Victory” protest against the government of Nicolas Maduro, in Caracas on June 10, 2017. Clashes at near daily protests by demonstrators calling for Maduro to quit have left 66 people dead since April 1, prosecutors say. (Photo by Luis Robayo/AFP Photo) 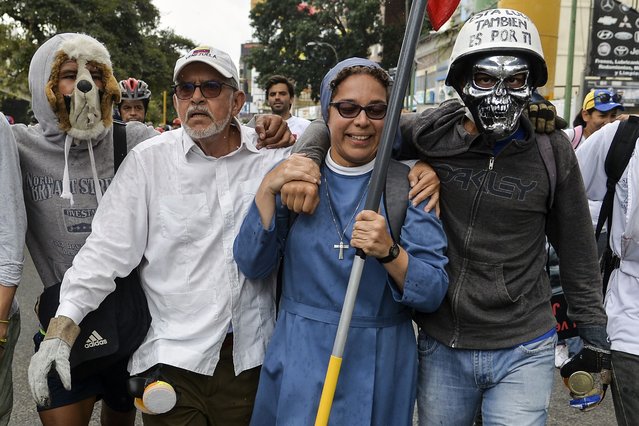 A nun and other demonstrators take part in the “Towards Victory” protest against the government of Nicolas Maduro, in Caracas on June 10, 2017. (Photo by Luis Robayo/AFP Photo) 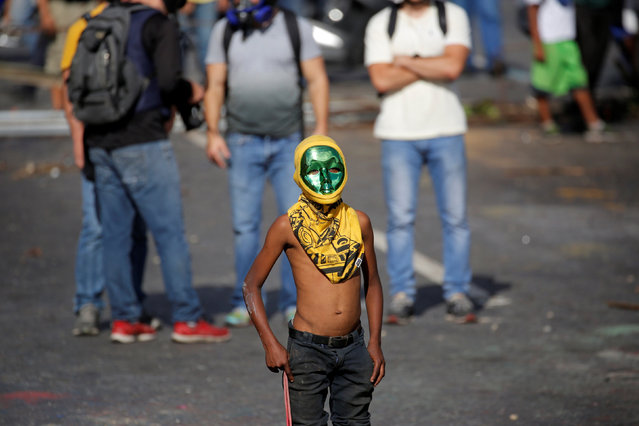 A boy takes part in a protest against the country’s president, Nicolas Maduro in Caracas, Venezuela on June 11, 2017. (Photo by Ivan Alvarado/Reuters) 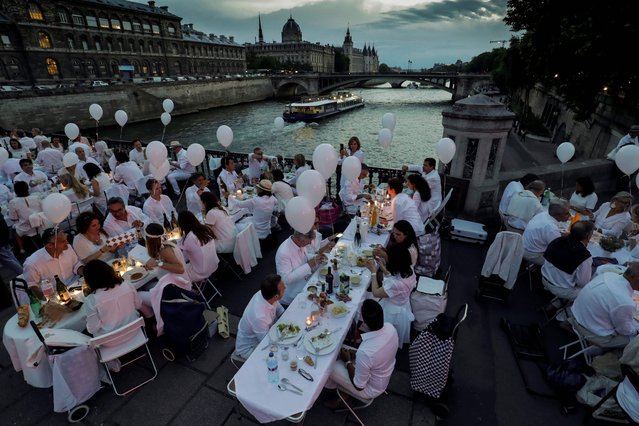 Participants dressed in white participate in a “Diner en Blanc” (“Dinner in White”) on the Arcole bridge (Pont d'Arcole) near the City Hall in Paris on June 8, 2017. The 29th Edition of the “Diner en Blanc”, the most chic picnic gathering thousands of participants, takes place this year on the City Hall plaza and nearby streets in Paris. (Photo by Thomas Samson/AFP Photo) 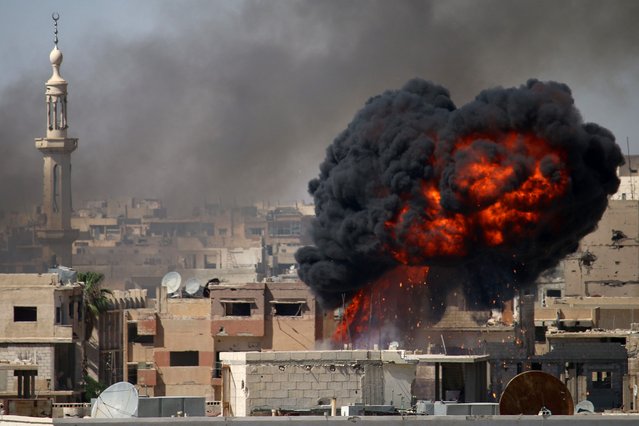 A ball of fire rises from a building following a reported air strike by Syrian government forces on a rebel-held area in the southern city of Daraa, on June 11, 2017. (Photo by Mohamad Abazeed/AFP Photo) 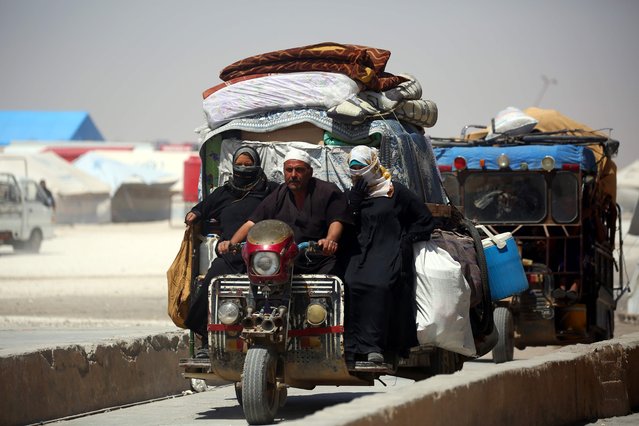 Displaced Syrians drive at a temporary camp in the northern Syrian village of Ain Issa on June 10, 2017, where many people who fled the Islamic State (IS) group stronghold of Raqa are taking shelter. (Photo by Delil Souleiman/AFP Photo) 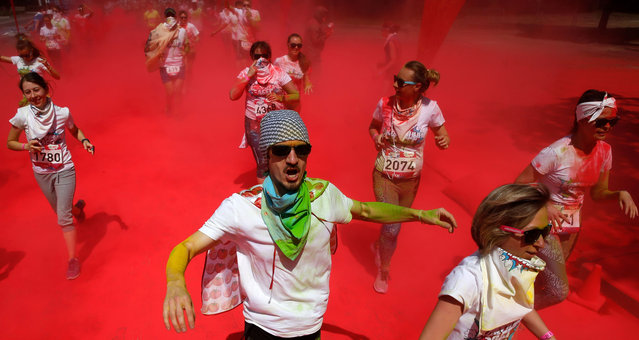 Participants race through clouds of red powder during the Colour Run at the Luzhniki Olympic complex in Moscow on June 11, 2017. (Photo by Maxim Zmeyev/AFP Photo) 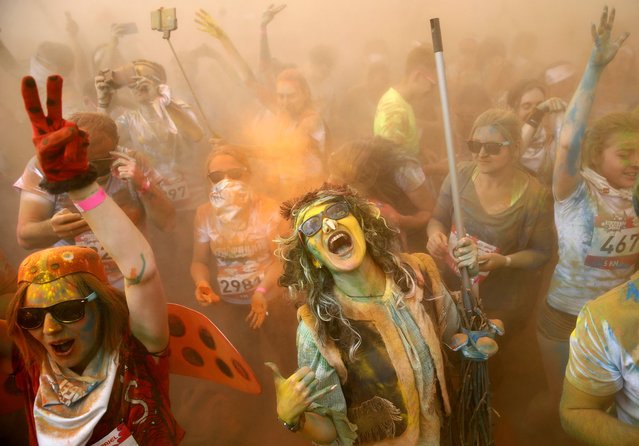 Runners covered in coloured powder celebrate after taking part in the 2017 Color Run at the Luzhniki Olympic Complex in Moscow on June 11, 2017. (Photo by Maxim Zmeyev/AFP Photo)

Grass covers the round table where environment ministers sit at the opening of a two-day G7 summit on the environment, in Bologna, Italy, Sunday, June 11, 2017. (Photo by Giorgio Benvenuti/ANSA via AP Photo) 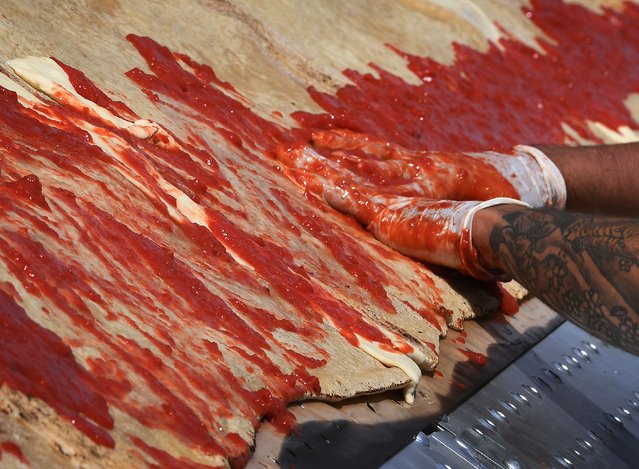 Volunteers spread tomato sauce and cheese onto the pizza base as they successfully break the Guinness World Records title for Longest pizza with a length of 1.32 miles (2.13km) at the Auto Club Speedway track, in Fontana, California on June 10, 2017. A consortium of pizza oven makers and bakers joined forces to shatter the previous record from held by Napoli in Italy by 600 feet (182 metres). (Photo by Mark Ralston/AFP Photo) 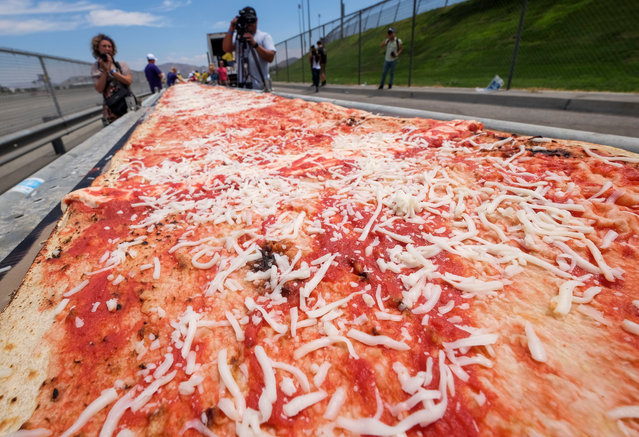 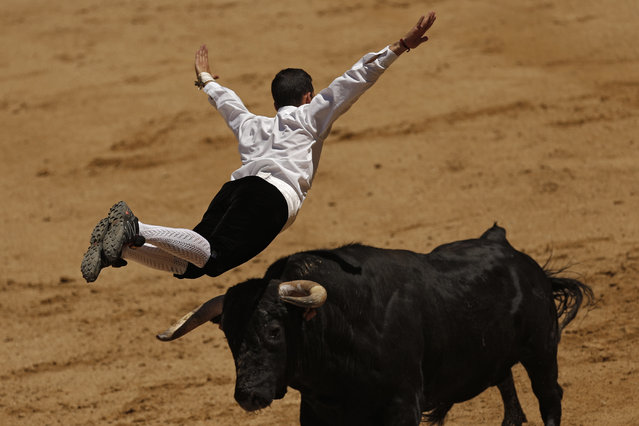 A “recortador” jumps over a bull during a “recortadores” festival at Las Ventas bullring in Madrid, Sunday, June 11, 2017. “Recortadores” is a performance consisting of leaping over a bull daringly and acrobatically, and the ones who dare to get closer to the bull and show less fear are the winners. (Photo by Francisco Seco/AP Photo) 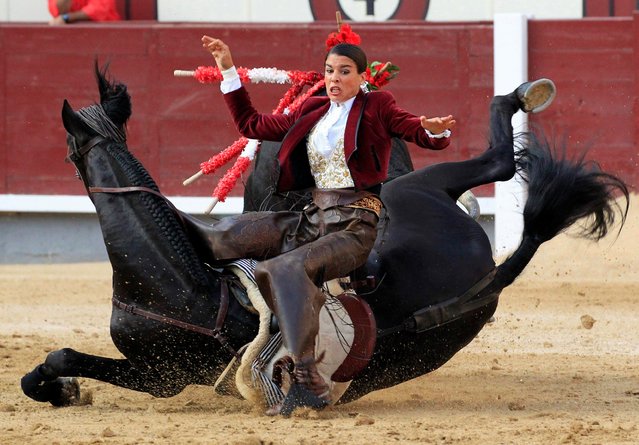 French mounted bullfighter Lea Vicens is gored by her first bull and falls off her horse during the 31st day of the San Isidro bullfighting festival at Las Ventas bullring in Madrid, Spain, 10 June 2017. (Photo by Victor Lerena/EPA) 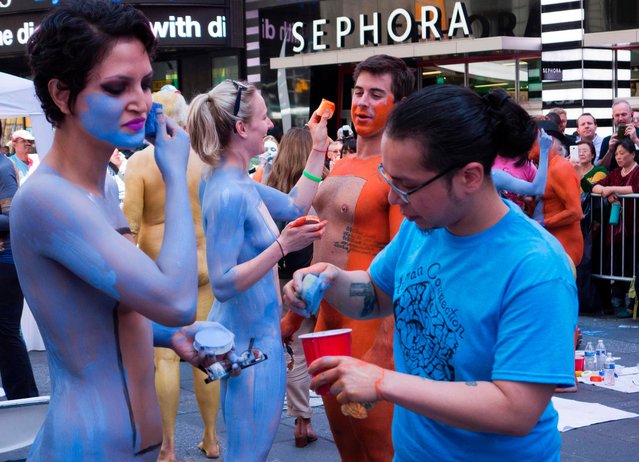 Models get their bodies painted in Times Square while being watched by the public June 9, 2017 in New York. The models displayed personal messages as a way to express how they feel about themselves and their bodies. (Photo by Don Emmert/AFP Photo)
Edit Del
12 Jun 2017 09:27:00, post received 0 comments
Publication archive:
←   →
Popular tags:
All tags
Last searches: