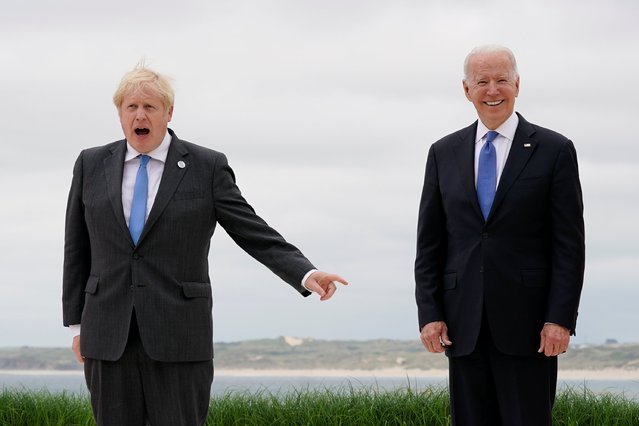 Britain's Prime Minister Boris Johnson gestures as he poses with US President Joe Biden and thier wives (unseen) during the G7 summit in Carbis Bay, Cornwall, south-west England on June 11, 2021. (Photo by Patrick Semansky/Pool via AFP Photo) 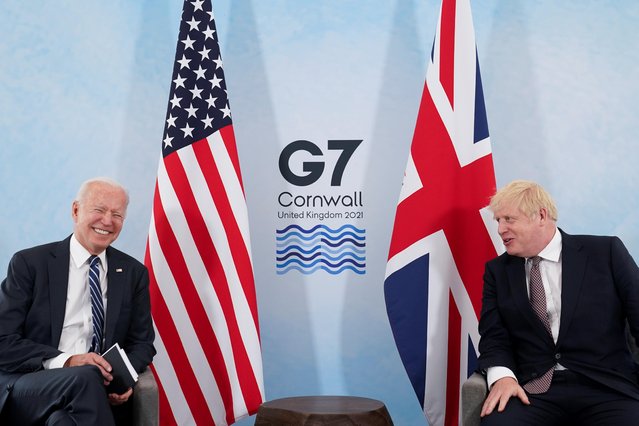 U.S. President Joe Biden laughs while speaking with Britain's Prime Minister Boris Johnson during their meeting, ahead of the G7 summit, at Carbis Bay, Cornwall, Britain on June 10, 2021. (Photo by Kevin Lamarque/Reuters) 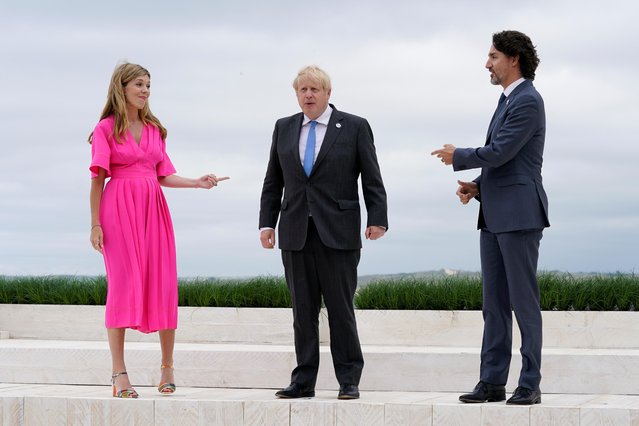 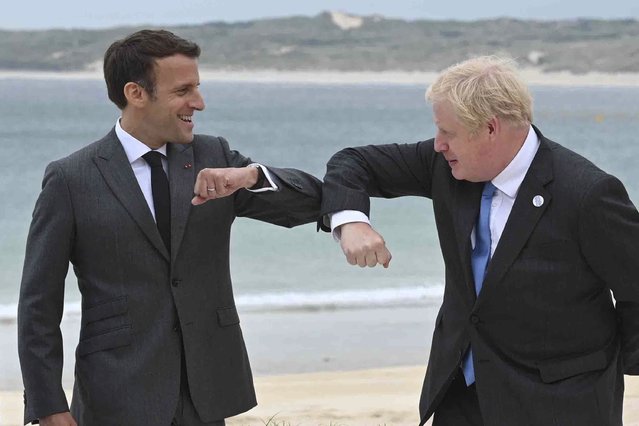 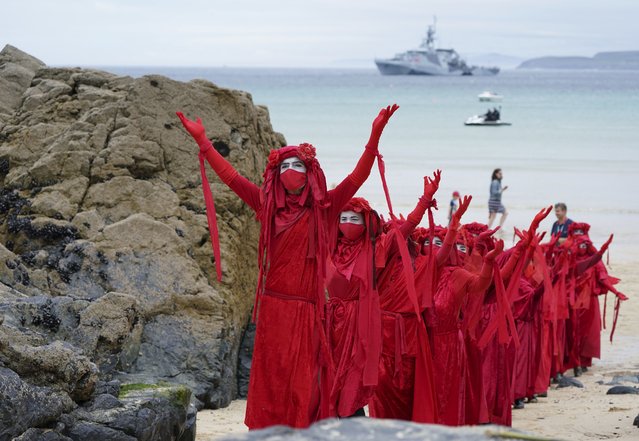 Protestors in costumes march on the beach of Carbis Bay outside the G7 meeting taking place in St. Ives, Cornwall, England, Friday, June 11, 2021. Leaders of the G7 begin their first of three days of meetings on Friday in Carbis Bay, in which they will discuss COVID-19, climate, foreign policy and the economy. (Photo by Jon Super/AP Photo) 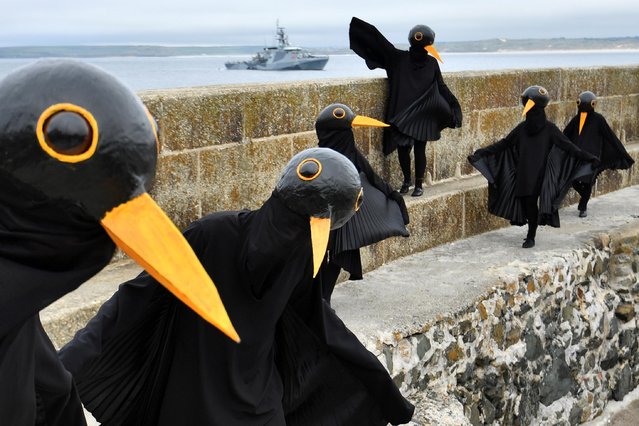 Climate change activists dressed up as black birds protest in St. Ives, on the sidelines of the G7 summit in Cornwall, Britain, June 11, 2021. (Photo by Dylan Martinez/Reuters) 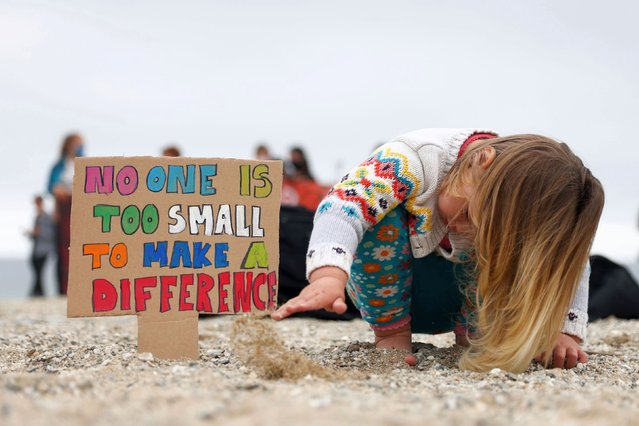 A girl plays with sand during a protest of the Cornwall Climate Youth Alliance in partnership with Fridays for Future and Climate Live, at Gyllyngvase Beach, in Falmouth, on the sidelines of the G7 summit in Cornwall, Britain, June 11, 2021. (Photo by Tom Nicholson/Reuters) 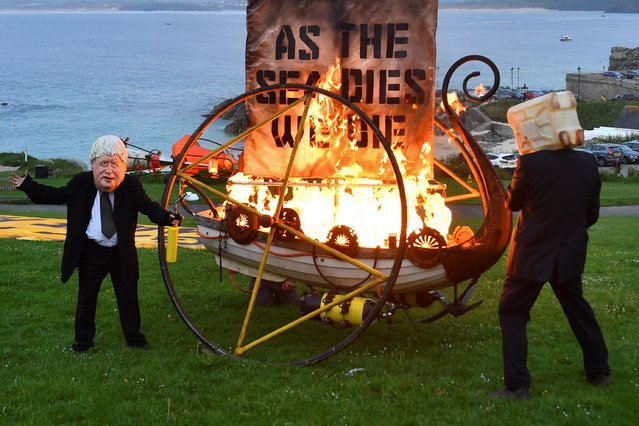 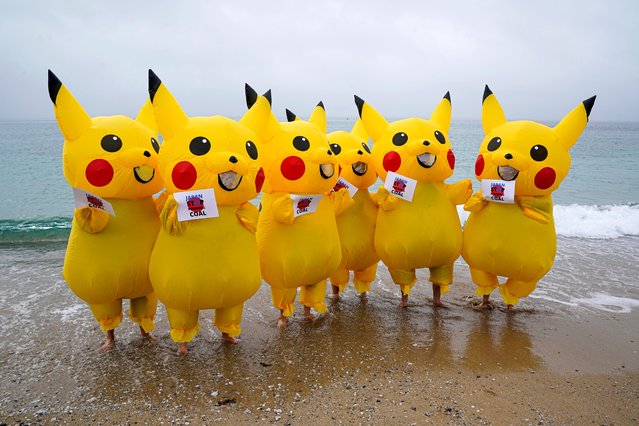 Protesters dressed as Pikachu characters demonstrate on Gyllyngvase Beach, calling on the Japanese government to stop burning coal by 2030, on June 11, 2021 in Falmouth, England. Environmental Protest Groups gather in Cornwall as the UK Prime Minister, Boris Johnson, hosts leaders from the USA, Japan, Germany, France, Italy and Canada at the G7 Summit in Carbis Bay. This year the UK has invited Australia, India, South Africa and South Korea to attend the Leaders' Summit as guest countries as well as the EU. Protest groups hope to highlight their various causes to the G7 leaders and a global audience as the eyes of the world focus on Cornwall during the summit. (Photo by Hugh Hastings/Getty Images) 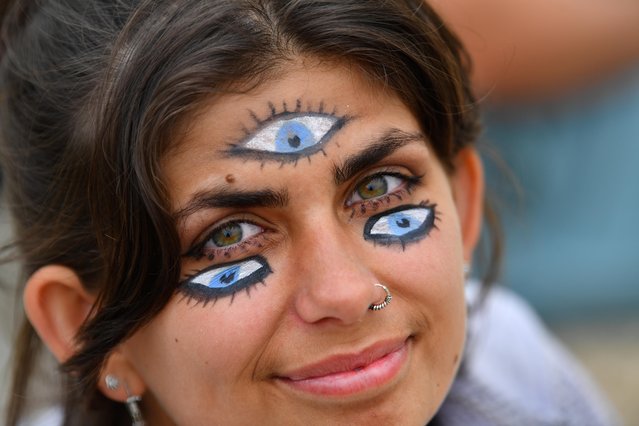 Climate activist Marijka Zwozdiak, 20 takes part in a demonstration on the beach in St. Ives, on the sidelines of G7 summit in Cornwall, Britain, June 11, 2021. (Photo by Dylan Martinez/Reuters) 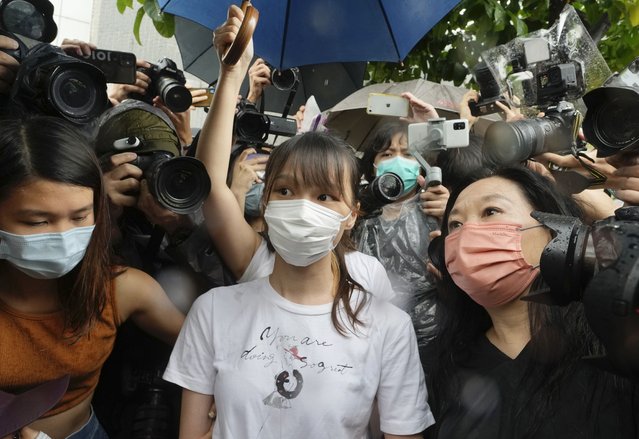 Agnes Chow, center, a prominent pro-democracy activist who was sentenced to jail last year for her role in an unauthorized protest, is released in Hong Kong Saturday, June 12, 2021. Chow rose to prominence as a student leader in the now defunct Scholarism and Demosisto political groups, alongside other outspoken activists such as Joshua Wong and Ivan Lam. (Photo by Vincent Yu/AP Photo) 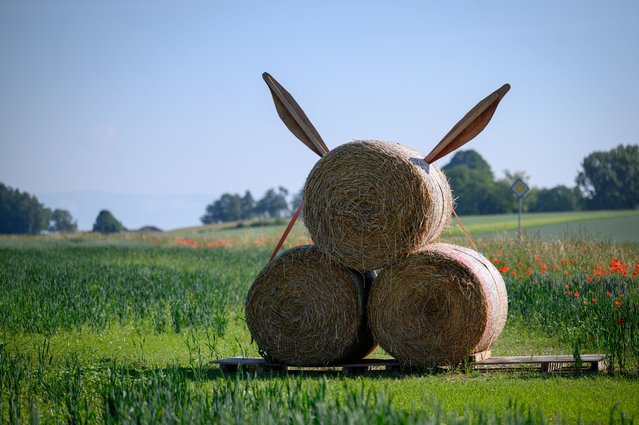 A picture taken on June 11, 2021 at the entrance of the village of Cottens shows a bunny character seen from behind, made from straws balls and used by a farmer as electoral against an initiative trying to ban the use of pesticides for the Swiss agriculture due to be voted on June 13, 2021. Switzerland votes on Sunday June 13 a series of hot topics: anti-terror measures, Covid-19 laws and proposals to protect the environment through banning synthetic pesticides. Swiss voters must decide whether they approve a Covid-19 law that extends the government's powers to fight the pandemic and mitigate its consequences on society and the economy. But the two anti-pesticide proposals have triggered the most noise and fury, in an electoral campaign marked by fiery debates between farmers. (Photo by Fabrice Coffrini/AFP Photo) 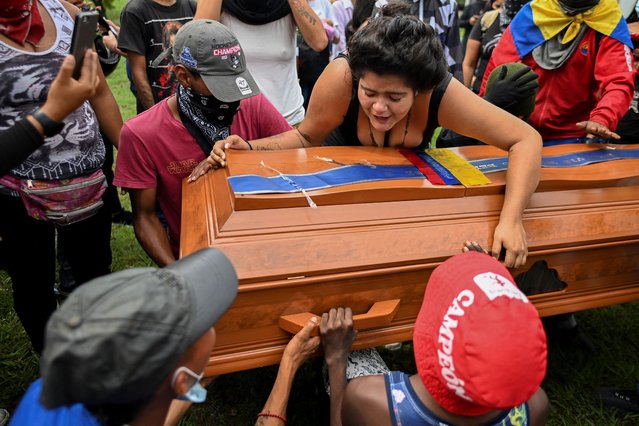 People participate on June 10, 2021 in Cali, Colombia, in the funeral of Angelvis Gregorio Bello, a demonstrator who was found dead on the road beetwen Cali and Palmira three weeks ago. Cali city is the epicenter of protests against the government of Colombian President Ivan Duque that began on April 28 and have left some 61 people dead, according to authorities and the Ombudsman. Two of them were Policemen. About 2,400 people and police officers were injured in the protests, according to the Defense Ministry. (Photo by Luis Robayo/AFP Photo) 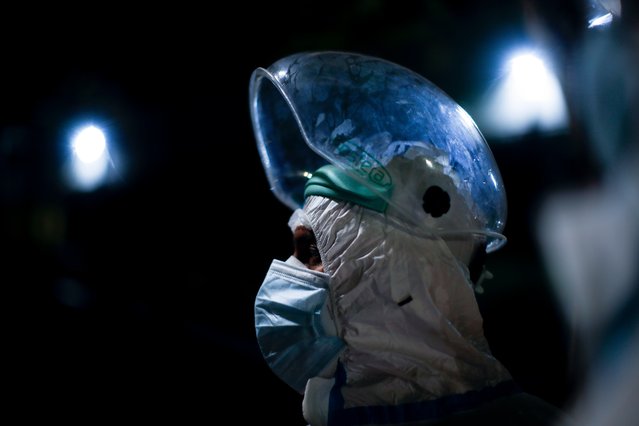 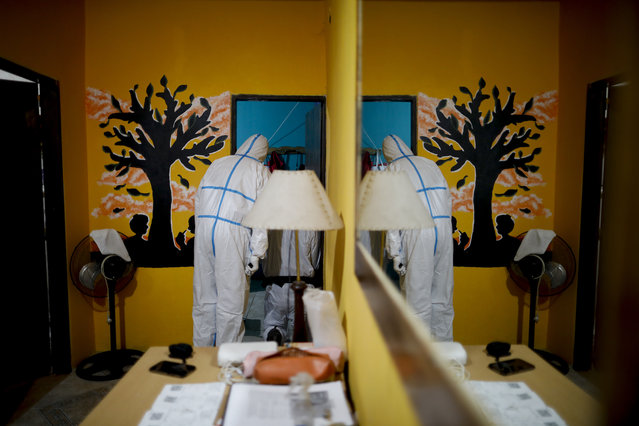 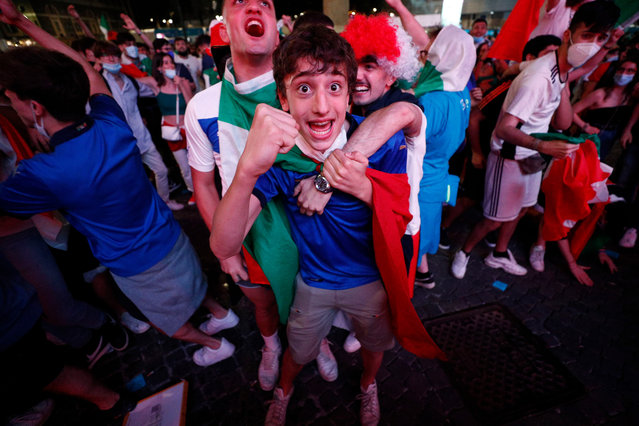 Fans of Italy react after Italy scored their third goal, as they watch at a fan zone on Piazza del Popolo in Rome on June 11, 2021, the EURO 2020 2021 European Football Championship Group A's Turkey vs Italy kick off match. (Photo by Guglielmo Mangiapane/Reuters) 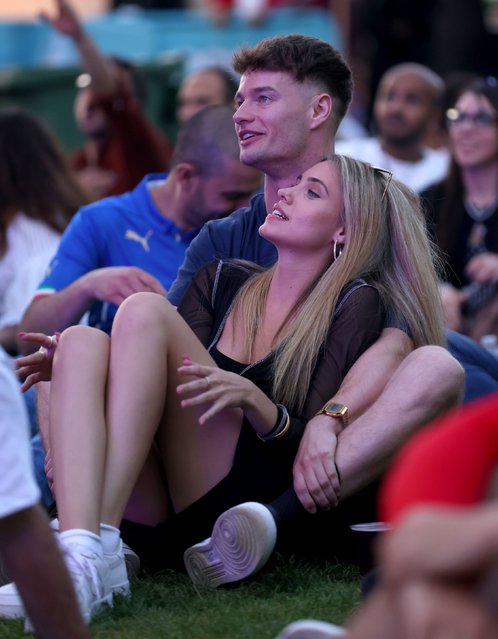 Fans at Potters Fields Park as they watch the UEFA Euro 2020 Group A opening match between Turkey and Italy held at the Stadio Olimpico, Italy on Friday, June 11, 2021. (Photo by Steven Paston/PA Images via Getty Images) 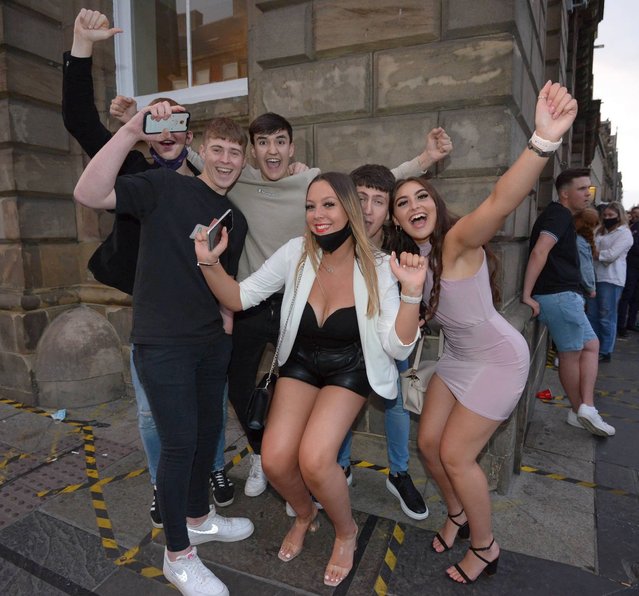