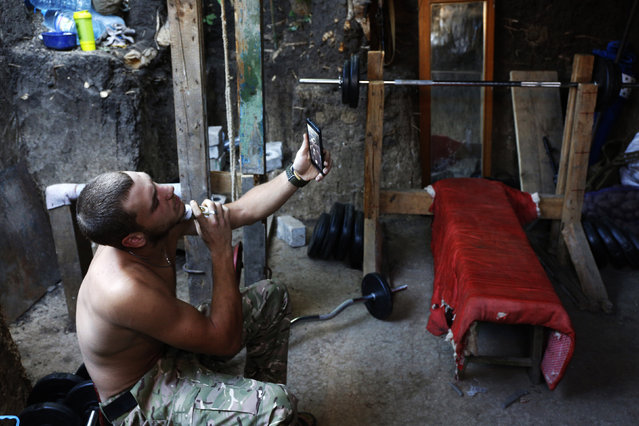 A Ukrainian serviceman looks at his image on his mobile phone camera as he shaves in an improvised sports hall on the front-line with Russia-backed separatists near the southeastern city of Mariupol on June 12, 2018. Germany and France voiced cautious optimism Monday that Russia and Ukraine will take steps to revive the long-stalled peace process in the smouldering Ukraine war that has claimed 10,000 lives. Despite high tensions between Western powers and President Vladimir Putin's Russia, the four foreign ministers held their first meeting since early last year to revitalise a long ignored truce agreement. (Photo by Anatolii Stepanov/AFP Photo) 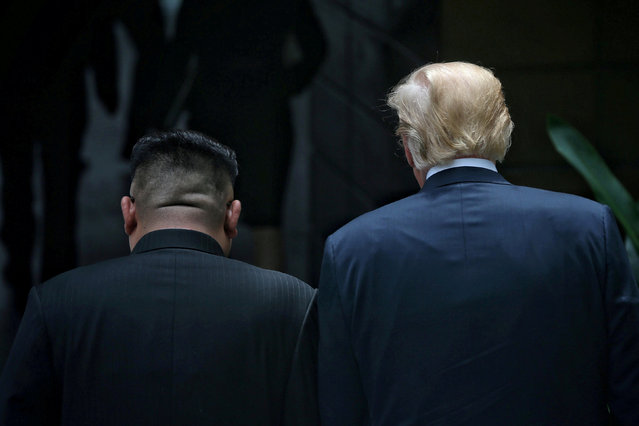 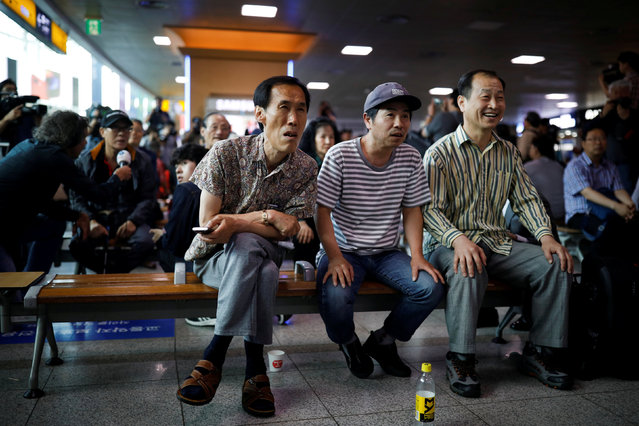 People watch a TV broadcasting a news report on summit between the U.S. and North Korea, in Seoul, South Korea, June 12, 2018. (Photo by Kim Hong-Ji/Reuters) 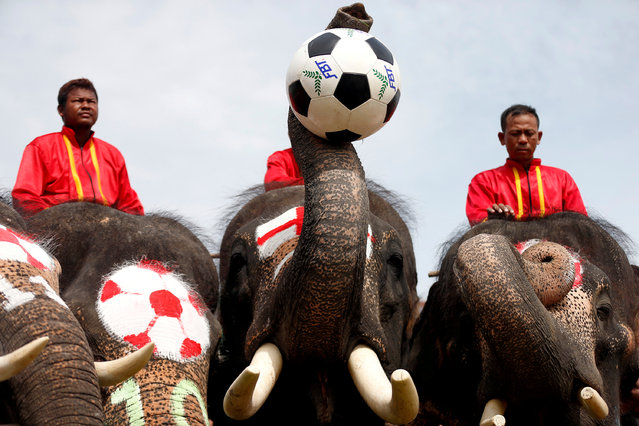 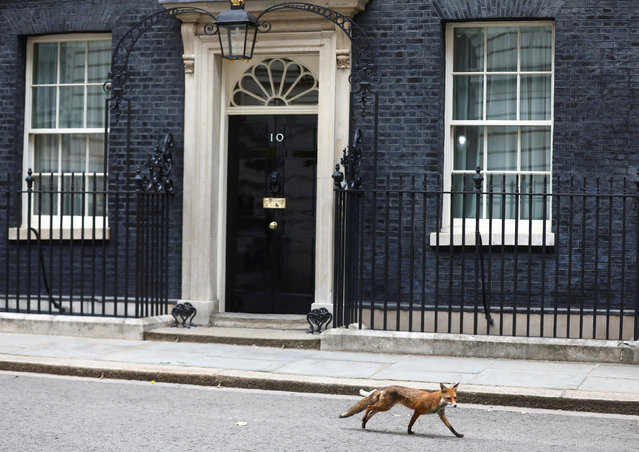 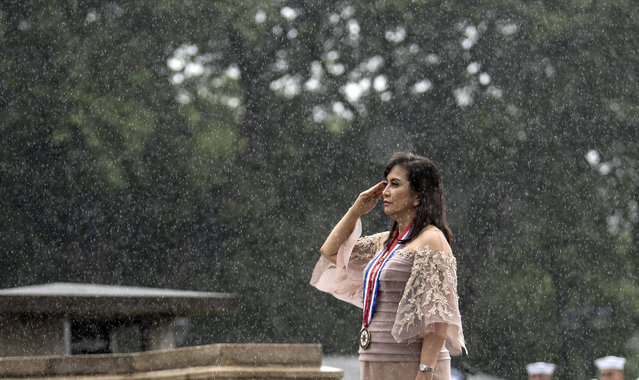 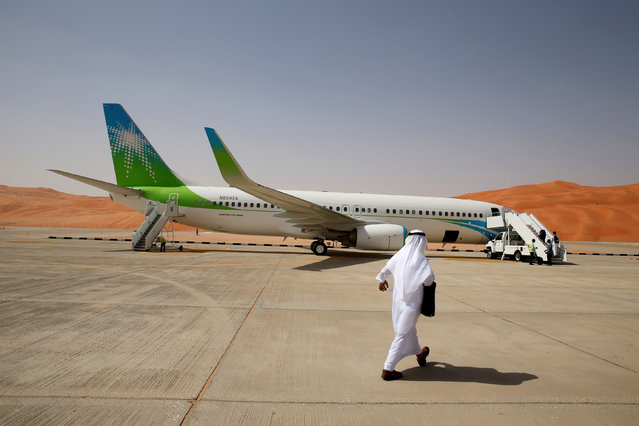 An Aramco employee walks towards an Aramco private plane at the private airport at Shaybah oilfield in the Empty Quarter, Saudi Arabia May 22, 2018. (Photo by Ahmed Jadallah/Reuters) 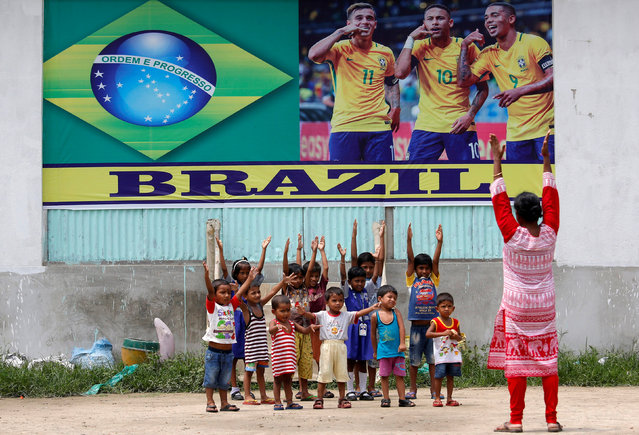 Children of a municipal school exercise in front of a banner of Brazil's soccer players pasted on a wall in Kolkata, ahead of the FIFA World Cup, in Kolkata, India June 12, 2018. (Photo by Rupak De Chowdhuri/Reuters) 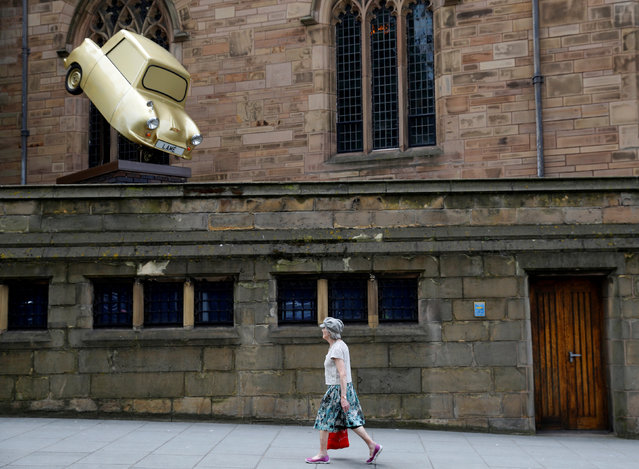 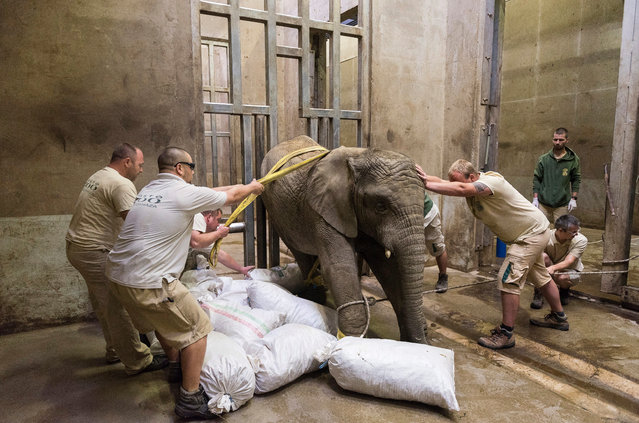 Zoo staff drag and push Kito, the tranquilized three-year old African elephant bull, to lie down for the removal of its broken tusk in the elephant house of Sosto Zoo in Nyiregyhaza, 245 kilometers east of Budapest, Hungary, 11 June 2018 (issued 12 June 2018). Professor Steenkamp led a team of the zoo's three vets and six keepers to extract the inflamed tusk, a medical intervention which is currently performed by only three veterinarians in the world. (Photo by Attila Balazs/EPA/EFE) 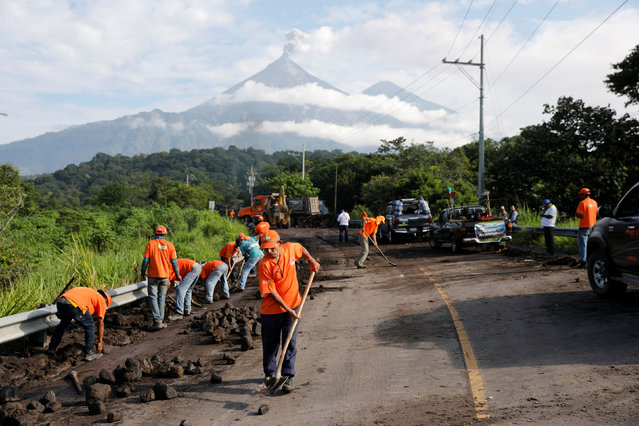 Workers clean the road after lahar flowed down from the Fuego volcano at El Rodeo in Escuintla, Guatemala June 12, 2018. (Photo by Carlos Jasso/Reuters) 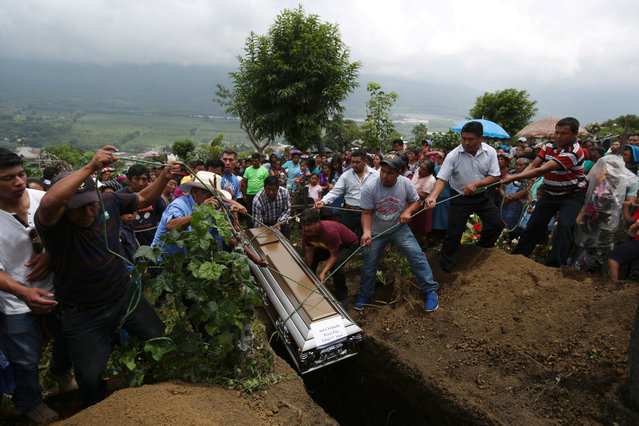 People attend the funeral of 17 year old Aura Yolanda Perez Paz, who died during the eruption of the Fuego volcano in Alotenango, Guatemala June 12, 2018. (Photo by Jose Cabezas/Reuters) 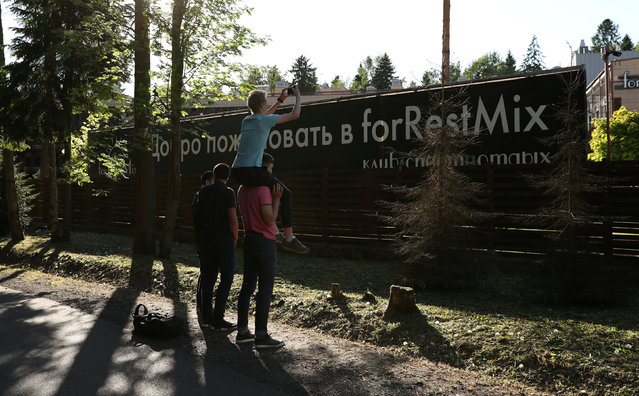 Members of the public try to see over the fence after the bus carrying the England football team arrived at the team hotel in Repino, Russia, on June 12, 2018, ahead of the Russia 2018 World Cup football tournament. (Photo by Lee Smith/Reuters) 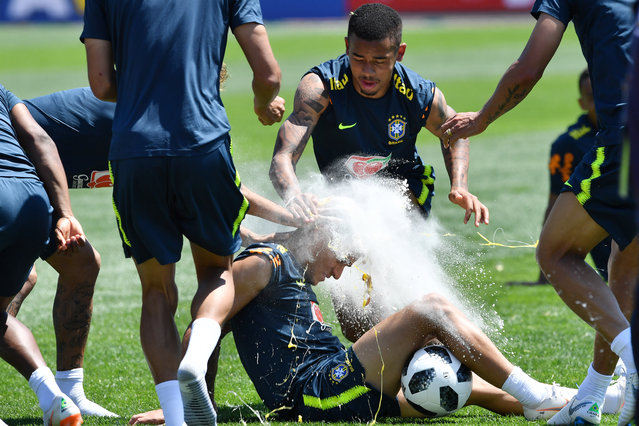 Brazil's Neymar (not in frame) and Gabriel Jesus (C) break an egg on the head of teammate Philippe Coutinho as they celebrate his birthday during a training session at Sochi Municipal Stadium in Sochi on June 12, 2018, ahead of the Russia 2018 World Cup football tournament. (Photo by Nelson Almeida/AFP Photo) 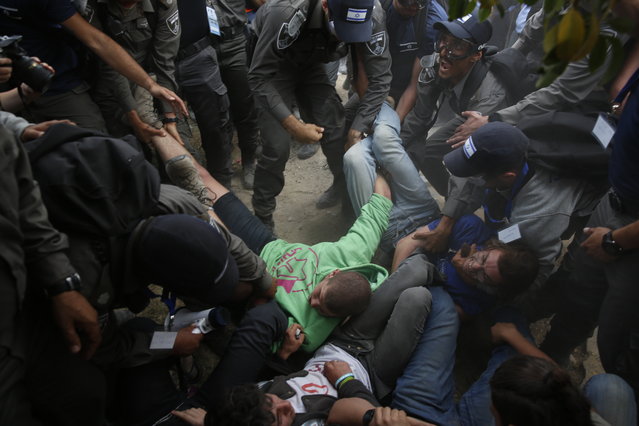 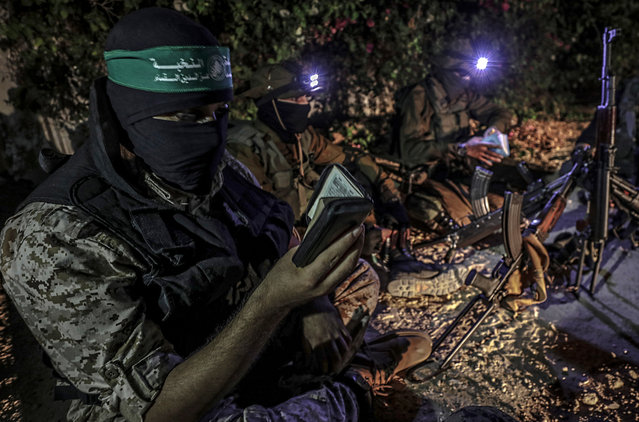 Fighters of Ezz al-Din Al-Qassam brigades, the military wing of the Hamas movement, read from the holy Quran during Laylat al-Qadr (Night of Decree), which is considered one of the holiest nights of Ramadan, near the border with Israel in the northern Gaza Strip, 11 June 2018. In Islamic belief Laylat Al-Qadr marks the night when the first verses of the Koran were revealed to the Prophet Mohammed. Muslims around the world celebrate the holy month of Ramadan by praying during the night time and abstaining from eating and drinking, smoking and sexual relations during the period between sunrise and sunset. Ramadan is the ninth month in the Islamic calendar and it is believed that the Koran's first verse was revealed during its last 10 nights. (Photo by Mohammed Saber/EPA/EFE) 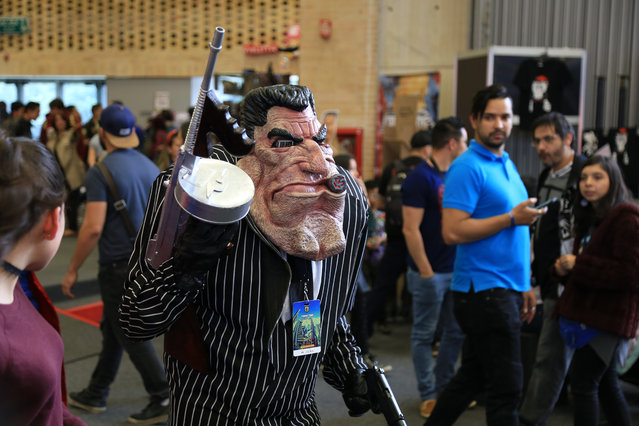 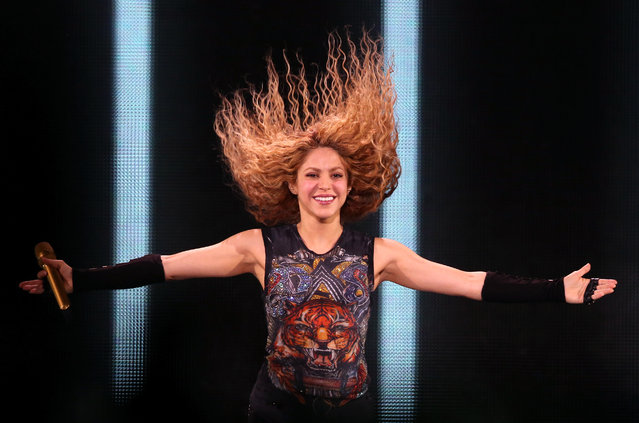 Shakira performs live on stage during the “El Dorado World Tour” at The O2 Arena on June 11, 2018 in London, England. (Photo by Simone Joyner/Getty Images) 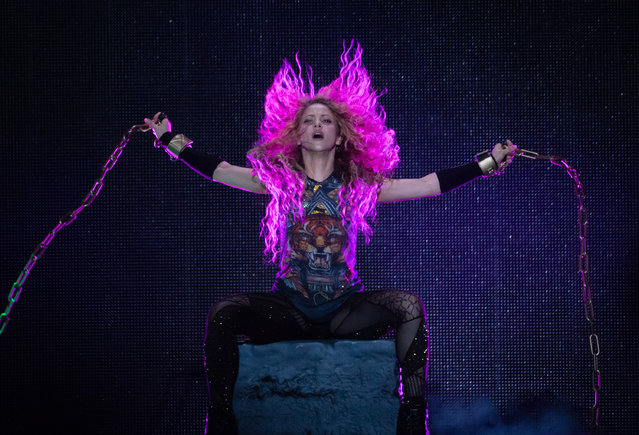 Shakira performs live at The O2 Arena on June 11, 2018 in London, England. (Photo by Samir Hussein/Redferns) 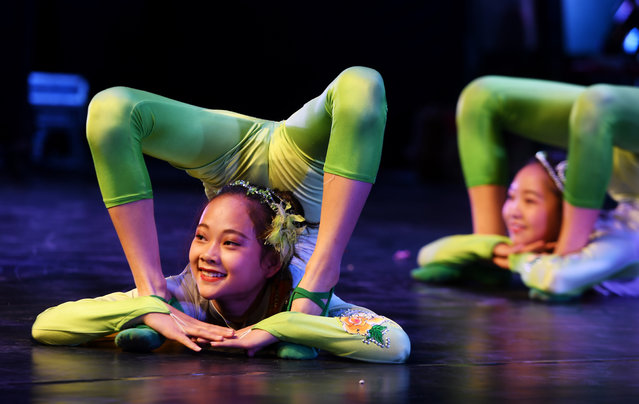