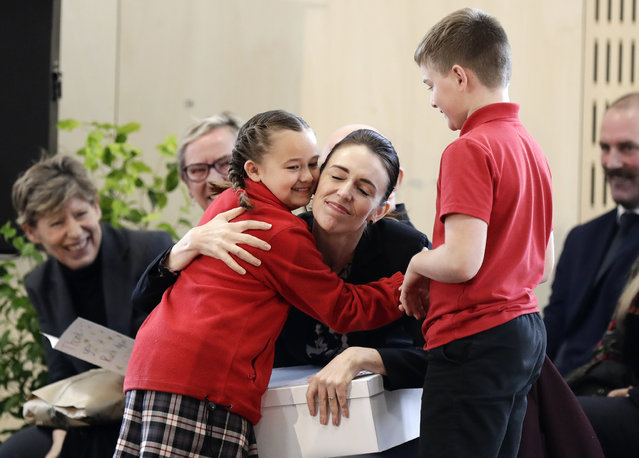 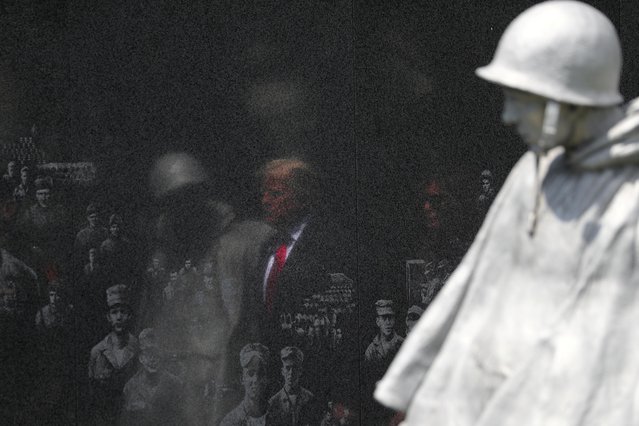 U.S. President Donald Trump and first lady Melania Trump are reflected in a memorial wall as they arrive for a wreath laying ceremony at the Korean War Veterans Memorial in Washington, U.S., June 25, 2020. (Photo by Tom Brenner/Reuters) 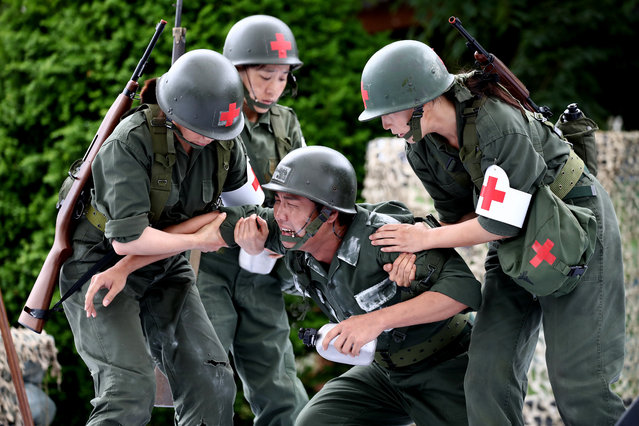 South Korean performers participate in a re-enactment of the battle of the Korean war during the ceremony to mark the 70th anniversary of the Korean War in Cheorwon, near the border with North Korea on June 25, 2020 in Cheorwon, South Korea. Over 66,000 South Koreans have been separated from their families during the Korean War which started on June 25, 1950, and effectively split the Korean Peninsula into two over the 3-year conflict. The fighting between North and South Korea ended on July 27, 1953, with the signing of the Korean Armistice Agreement and the heavily guarded Demilitarized Zone was created, however, both countries remain technically still at war since no peace agreement was signed and many Koreans died before they could reunite with their loved ones. (Photo by Chung Sung-Jun/Getty Images) 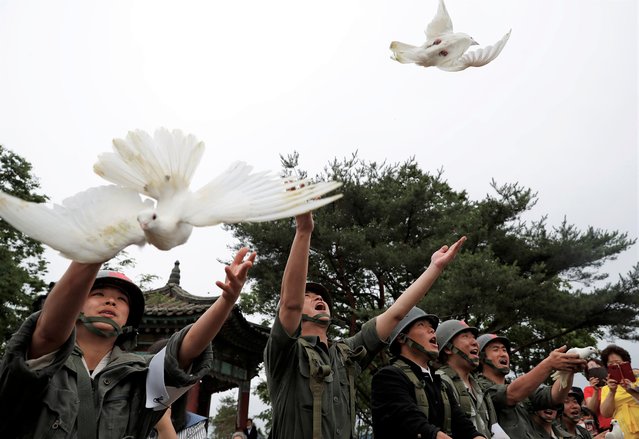 Doves are released during a ceremony commemorating the 70th anniversary of the Korean War, near the demilitarized zone separating the two Koreas, in Cheorwon, South Korea, June 25, 2020. (Photo by Kim Hong-Ji/Reuters) 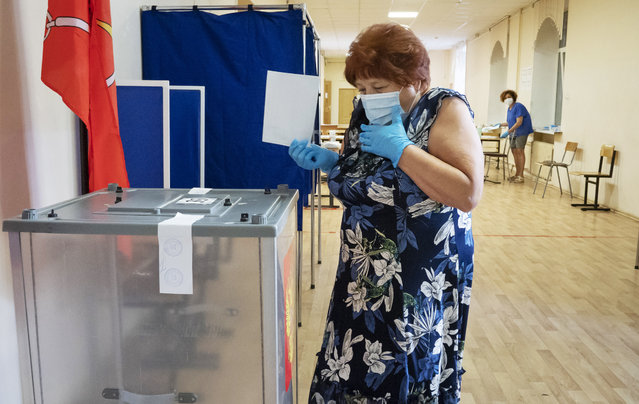 A voter wearing a face mask and protective gloves to protect against coronavirus walks to cast her ballot at a polling station in St.Petersburg, Russia, Thursday, June 25, 2020. Polls have opened in Russia on Thursday for a week-long vote on a constitutional reform that may allow President Vladimir Putin to stay in power until 2036. (Photo by Dmitri Lovetsky/AP Photo) 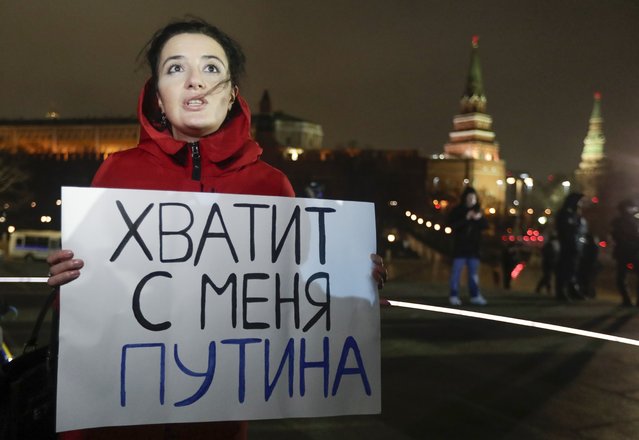 In this file photo taken on Wednesday, March 11, 2020, A protester holds a poster that reads: “Enough Putin for me”, in front of the monument of the Prince Vladimir next to the Kremlin in Moscow. The constitutional reform passed by the Duma on Wednesday would allow Putin to run for presidency two more times after 2024. Before the national vote, it will be reviewed by Russia's Constitutional Court. (Photo by Pavel Golovkin/AP Photo/File) 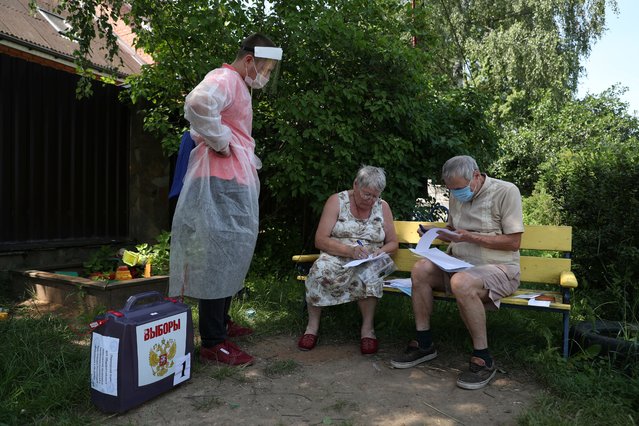 Local residents fill in documents as a member of an electoral commission stands nearby with a mobile ballot box during a seven-day vote on constitutional reforms, in the village of Troitskoye in Moscow region, Russia on June 25, 2020. (Photo by Evgenia Novozhenina/Reuters) 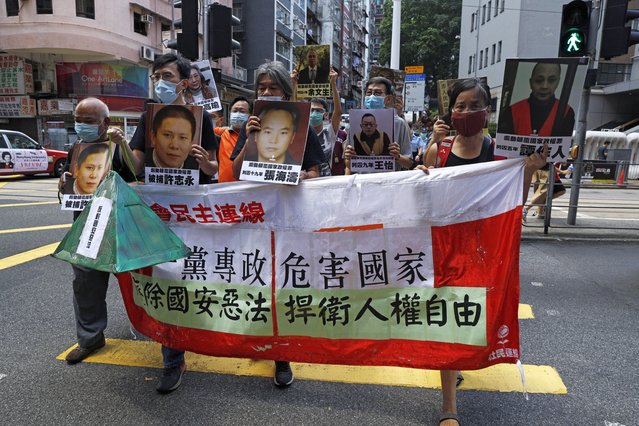 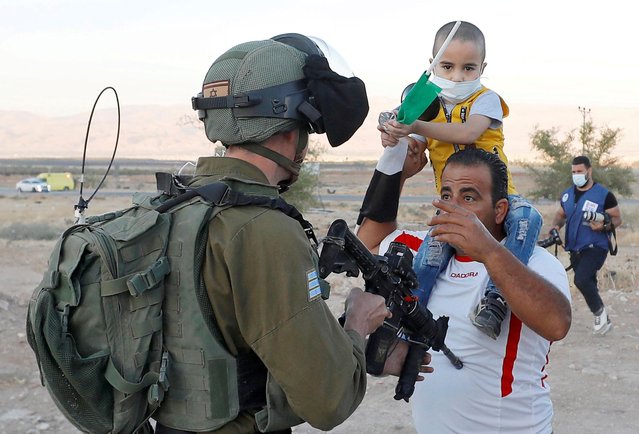 A Palestinian man argues with an Israeli soldier during a protest against Israel's plan to annex parts of the occupied West Bank, in Jordan Valley on June 24, 2020. (Photo by Mohamad Torokman/Reuters) 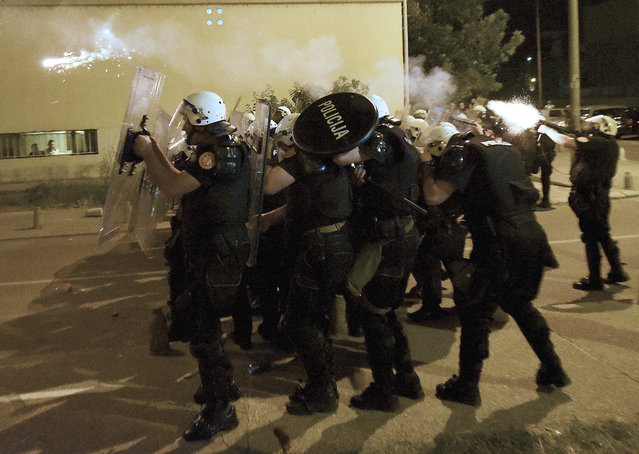 Montenegro police officers fire tear gas during protest in Podgorica, Montenegro, Wednesday, June 24, 2020. Seven police officers were injured and dozens protesters have been detained, including two lawmakers of the Democratic Front, in opposition riots that broke out in several Montenegrin cities on Wednesday. (Photo by Risto Bozovic/AP Photo) 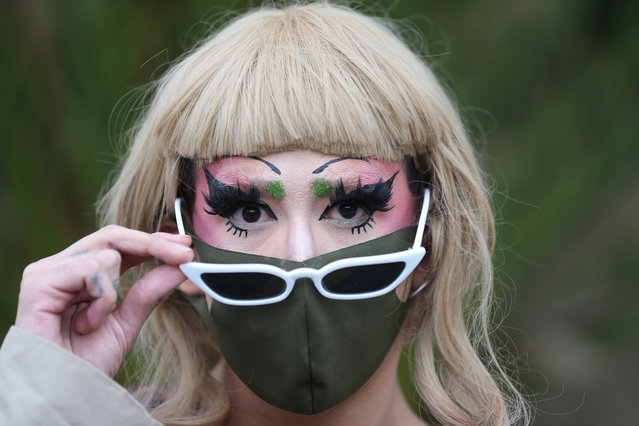 A member of an LGBT rights group looks on during a protest outside the Siglo XXI Hospital in Mexico City, Mexico, 24 June 2020. LGBT activists denounced a series of inconsistencies in the investigations into the recent death of transgender doctor Maria Elizabeth Montano. The body of Montano, a Mexican Institute of Social Security (IMSS) worker who went missing on 08 June 2020, was found on 19 June on a road near the town of Tres Marias, in the neighboring state of Morelos. (Photo by Saschenka Gutierrez/EPA/EFE) 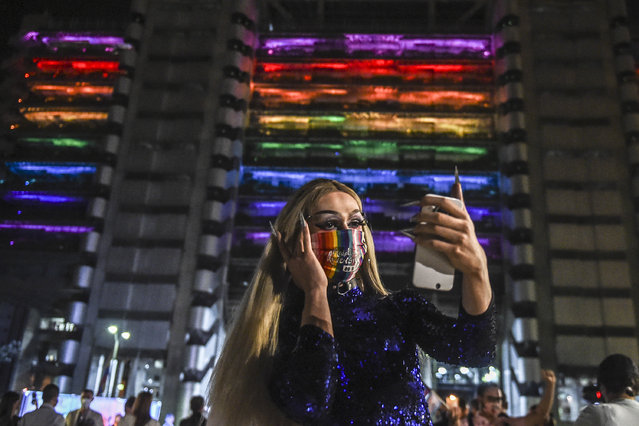 A transgender woman takes a selfie in front of the Empresas Publicas de Medellin (EPM) building illuminated with rainbow colors for Pride Month, amid de COVID 19 pandemic, in Medellin, on June 24, 2020. (Photo by Joaquin Sarmiento/AFP Photo) 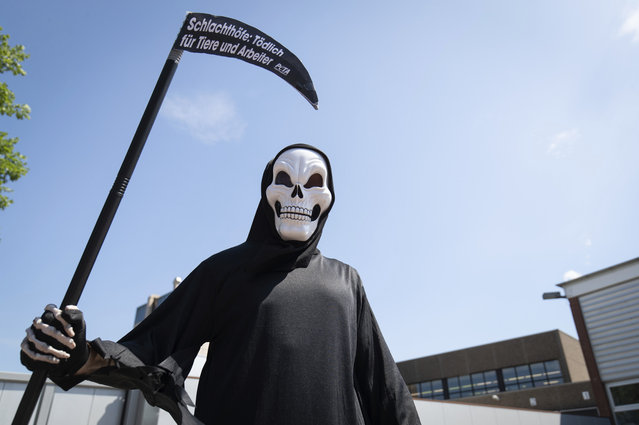 An activist of the animal protection organization Peta disguised as death stands in front of a delivery entrance of the meat and sausage manufacturer Schulte in Dissen, Germany, Thursday, June 25, 2020. Schulte belongs to the Tönnies Group. Under the motto “Slaughterhouses: Deadly for humans and animals”, Peta wants to draw attention to the conditions in meat factories after the outbreak of the coronavirus at meat producers. (Photo by Friso Gentsch/dpa via AP Photo) 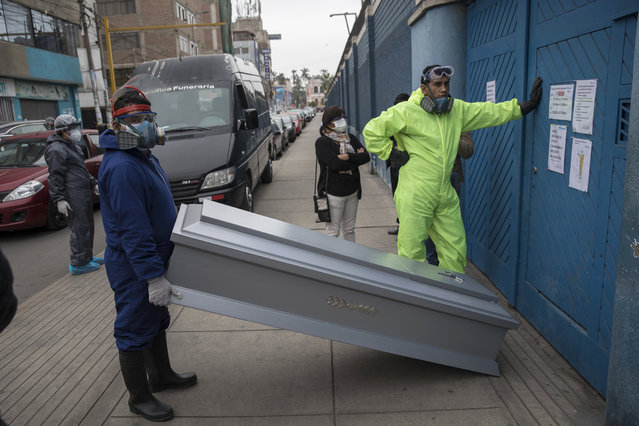 Funeral home workers wait their turn to pick up a body of a client who died from COVID-19, outside Almenara public hospital in Lima, Peru, Thursday, June 25, 2020. (Photo by Rodrigo Abd/AP Photo) 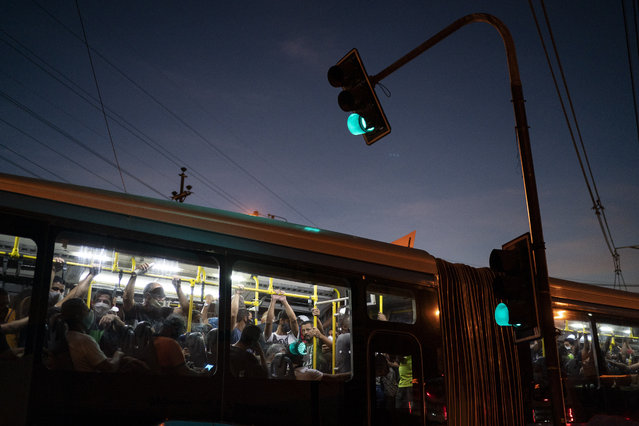 Commuters, some wearing protective face masks, ride a bus amid the new coronavirus pandemic in Rio de Janeiro, Brazil, Thursday, June 25, 2020. Authorities say buses can operate with people standing, but limited to 2 commuters per meter square, and marks on the floor will have to be painted in order to help people to keep their distance. (Photo by Leo Correa/AP Photo) 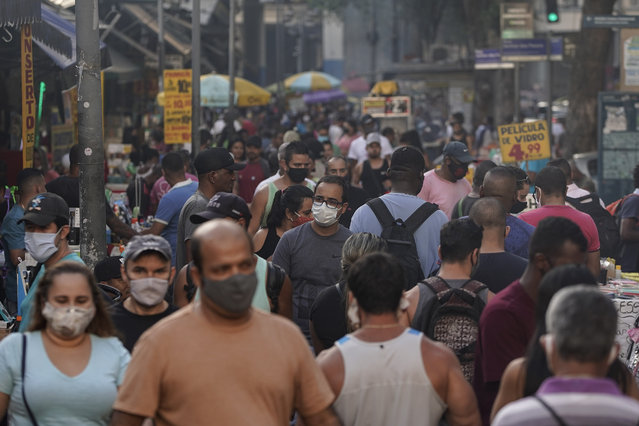 Pedestrians, some wearing protective face masks, walk through a street market in downtown in Rio de Janeiro, Brazil, Thursday, June 25, 2020. Rio continues with its plan to ease restrictive measures due to the new coronavirus and open up the economy to avoid an even worse economic crisis. (Photo by Leo Correa/AP Photo) 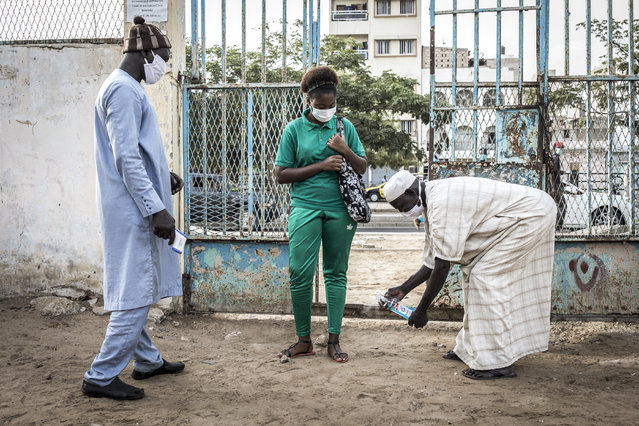 A High School student at the Lycee Blaise Diagne gets her feet disinfected as she arrives for her first day back at school in Dakar on June 25, 2020. Schools have been closed since early March 2020 due to the outbreak of the COVID-19 coronavirus in Senegal. (Photo by John Wessels/AFP Photo) 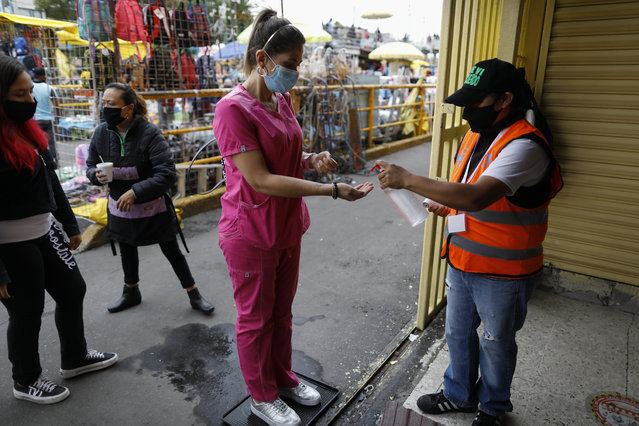 A shopper is given antibacterial gel as she enters Mercado Sonora, which reopened ten days ago with measures to reduce congestion and limit the spread of the coronavirus, in Mexico City, Thursday, June 25, 2020. (Photo by Rebecca Blackwell/AP Photo) 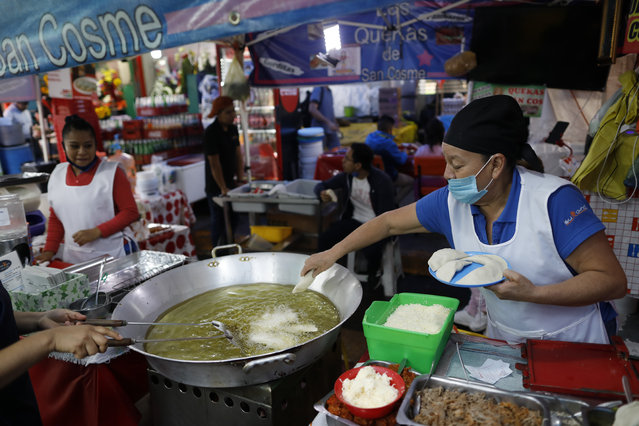 Sabina Hernandez Bautista, 59, prepares food in a stall inside Mercado San Cosme, where some vendors have put in place their own protective measures against coronavirus while others continue to work without masks or barriers, in Mexico City, Thursday, June 25, 2020. “We are all afraid”, said Bautista, who added she had no choice but to work to be able to feed her family, including her daughter who is attending university. (Photo by Rebecca Blackwell/AP Photo) 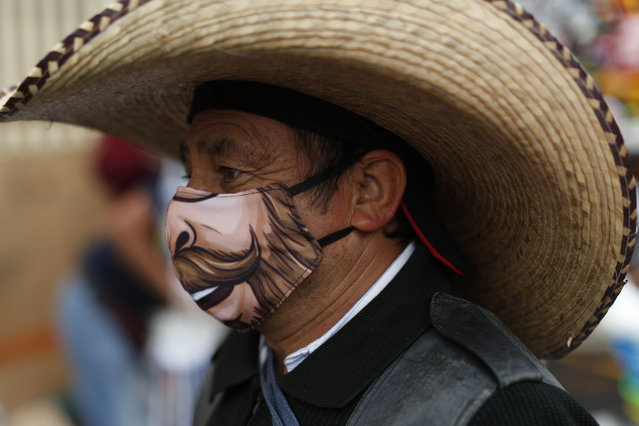