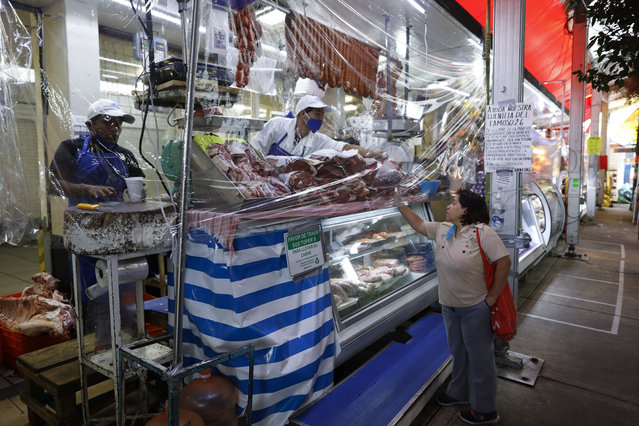 A butcher sells meat to a client from behind a sheet of plastic in Mercado San Cosme, where some vendors decided to put in place protective measures against coronavirus while others continue to work without masks or barriers, in Mexico City, Thursday, June 25, 2020. (Photo by Rebecca Blackwell/AP Photo) 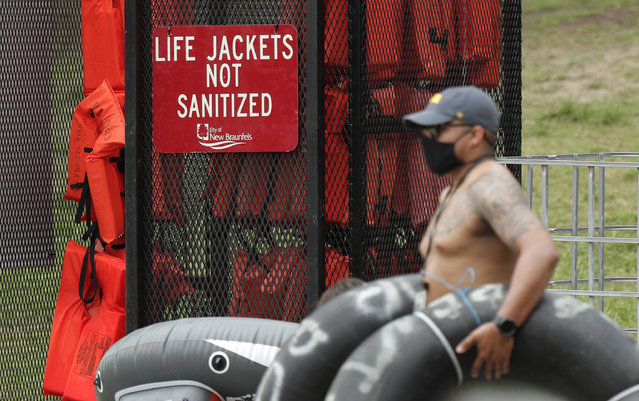 A tuber, wearing a mask to protect against the spread of COVID-19, passes a rack of life jackets as he prepares to float the Comal River, Thursday, June 25, 2020, in New Braunfels, Texas. Texas Gov. Greg Abbott said Wednesday that the state is facing a “massive outbreak” in the coronavirus pandemic and that some new local restrictions may be needed to protect hospital space for new patients. (Photo by Eric Gay/AP Photo) 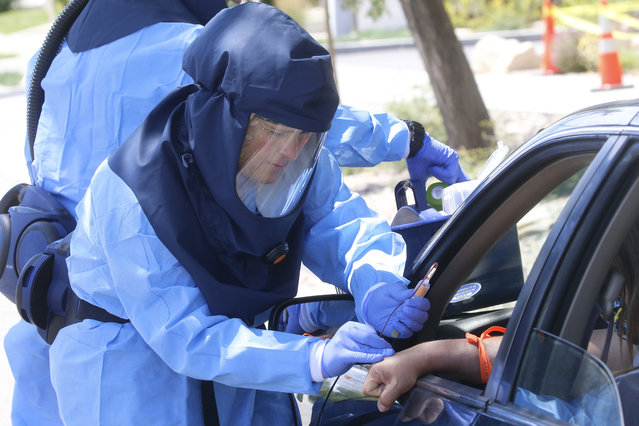 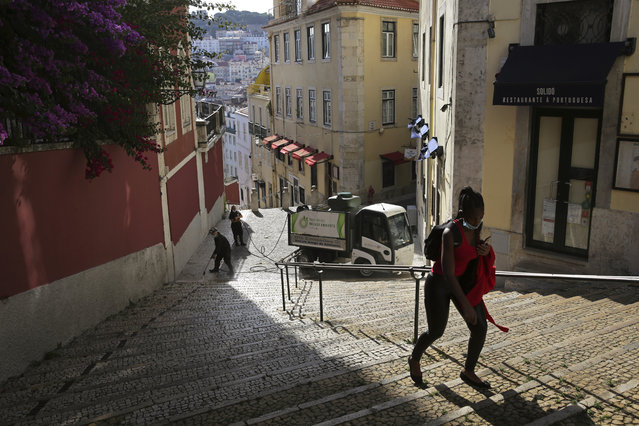 In this photo taken Wednesday, June 24, 2020, a woman wearing a face mask walks past workers washing the street in Lisbon's old center. Portugal avoided the dramatic numbers of infections and deaths recorded by some other European Union countries during the early months of the coronavirus outbreak but since ending its state of emergency and lockdown at the end of April, its total of officially recorded new infections has remained stubbornly high. (Photo by Armando Franca/AP Photo) 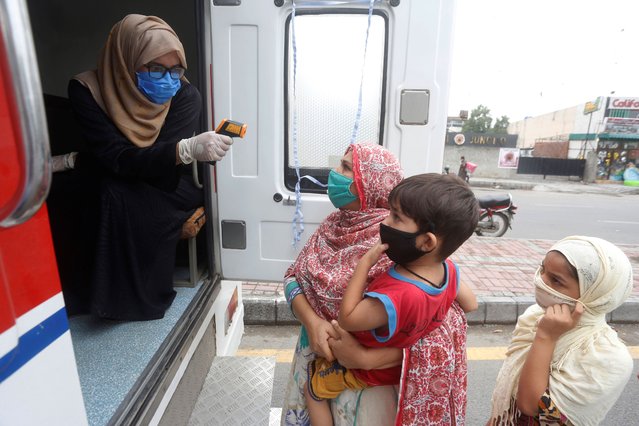 A health worker checks the body temperature of a woman at a mobile screening unit set up to control the spread of the coronavirus, in Lahore, Pakistan, Thursday, June 25, 2020. (Photo by K.M. Chaudhry/AP Photo) 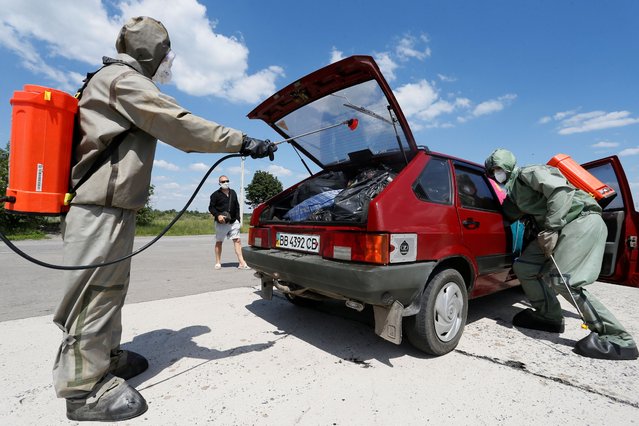 Specialists wearing protective gear carry out the disinfection of a car at a checkpoint on a way linking Ukrainian government-controlled territory and the self-proclaimed Donetsk People's Republic, near the settlement of Olenivka in Donetsk Region, Ukraine June 25, 2020. The checkpoint was temporarily closed due to the coronavirus disease (COVID-19) outbreak and then reopened. (Photo by Alexander Ermochenko/Reuters) 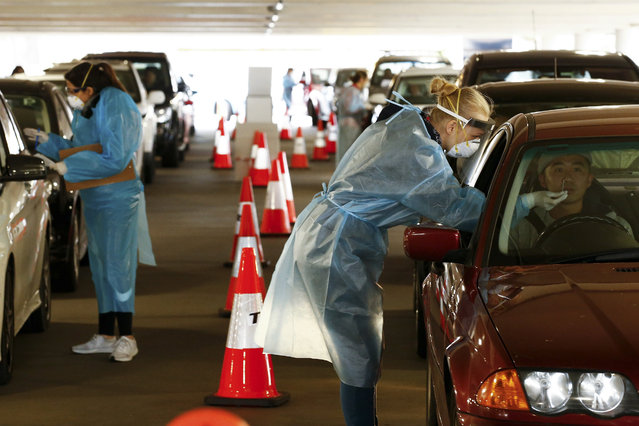 A drive-thru COVID-19 testing facility in Chadstone, Melbourne, Australia, 25 June 2020. The Australian Defence Force (ADF) and other states have been called in to help Victoria tackle its rising number of coronavirus cases. (Photo by Daniel Pockett/EPA/EFE/Rex Features/Shutterstock) 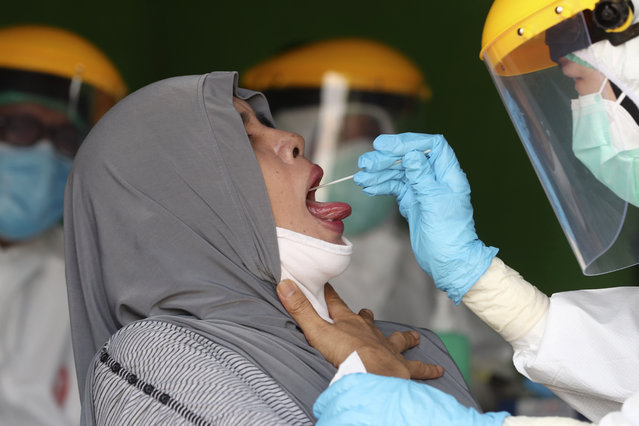 Health workers collect nasal swab samples from a woman during a mass test for the new coronavirus at a market in Jakarta, Indonesia, Thursday, June 25, 2020. (Photo by Tatan Syuflana/AP Photo) 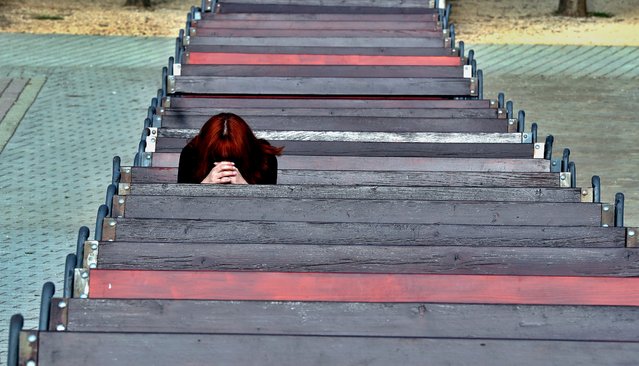 Catholic woman attend on mass, in village of Medjugorje, southern Bosnia and Herzegovina, 25 June 2020, amid the ongoing coronavirus COVID-19 pandemic, during the to mark the 39th anniversary of the alleged appearance of the Virgin Mary in Medjugorje. Since the outbreak of coronavirus, thousands of pilgrims have canceled their visit to Medjugorje, one of the largest Catholic shrines in the world, where the Virgin Mary allegedly appeared before the local shepherds in the hills surrounding the village. More than 30 million people are believed to have visited the world-famous village since the saint's first appearance. The Catholic Church has not yet recognized the miracle of Holy Mary's appearance to the Medjugorje shepherds on 24 June 1981. (Photo by Fehim Demir/EPA/EFE) 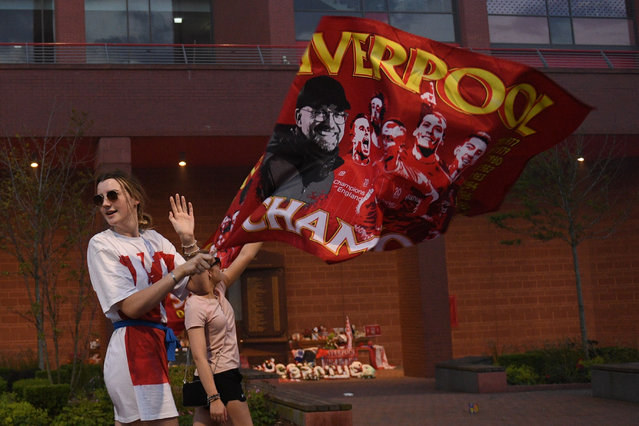 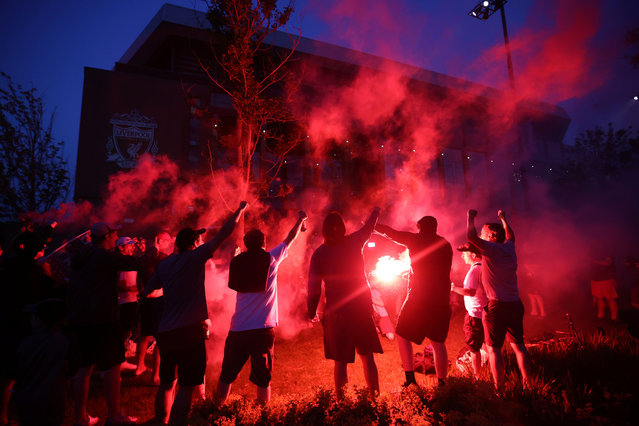 Fans celebrate Liverpool winning the Premier League title outside Anfield stadium in Liverpool, north west England on June 25, 2020, following Chelsea's 2-1 victory over Manchester City. Liverpool were crowned Premier League champions without kicking a ball on Thursday as Chelsea's 2-1 win over Manchester City ended the Reds' 30-year wait to win the English title. Jurgen Klopp's men sealed a 19th league title for the club with a record seven games left to play after City's defeat left them 23 points adrift of Liverpool at the top. (Photo by Carl Recine/Action Images via Reuters) 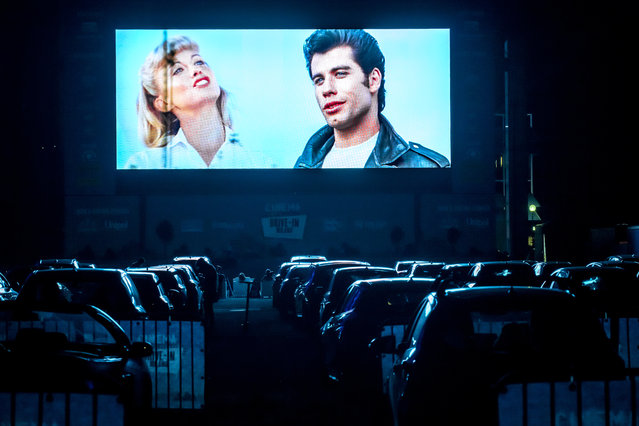 People in their cars watch the film “Grease” with John Travolta and Olivia Newton-John at the opening of a new drive-in cinema in Milan on June 24, 2020 in Milan, Italy. (Photo by Francesco Prandoni/Getty Images) 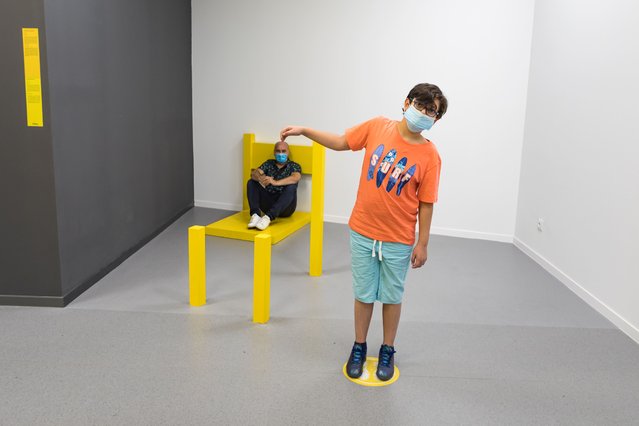 A father and son pose to perform the effect of “giant” and “dwarf” on June 25, 2020 in Madrid, Spain. The first “Museum of Illusions” in Spain opens in Madrid. The original concept was born in Zagreb, Croatia in 2015 and quickly became a recognized brand and a leading attraction in every city where it is located. Thus, Madrid joins cities such as New York, Shanghai, Kuala Lumpur, Toronto, Dubai, Doha, Orlando and Paris. The museum concept starts from the principle that fun and awesome tricks will teach visitors about vision, perception, the human brain and science. (Photo by David Benito/Getty Images) 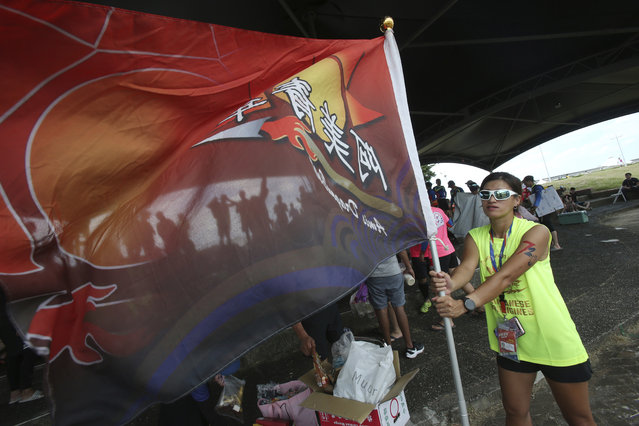 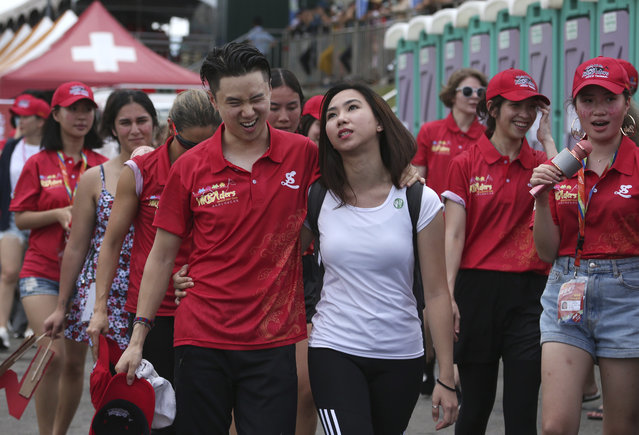 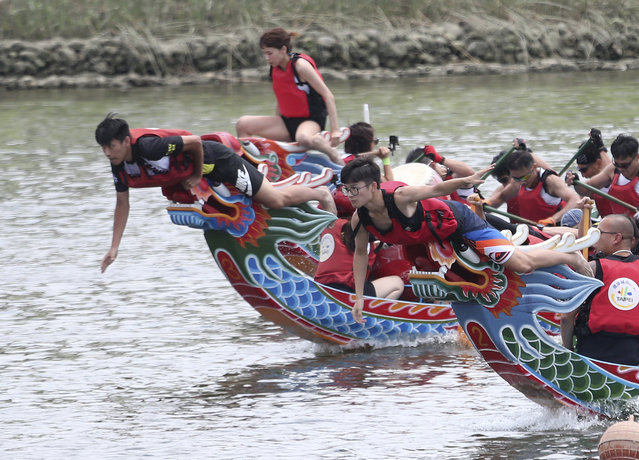 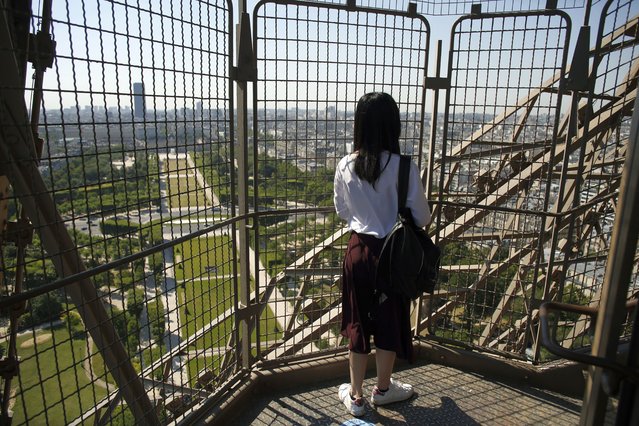 A visitor enjoys the view as she climbs the stairs of the Eiffel Tower, in Paris, Thursday, June 25, 2020. The Eiffel Tower reopens after the coronavirus pandemic led to the iconic Paris landmark's longest closure since World War II. (Photo by Thibault Camus/AP Photo) 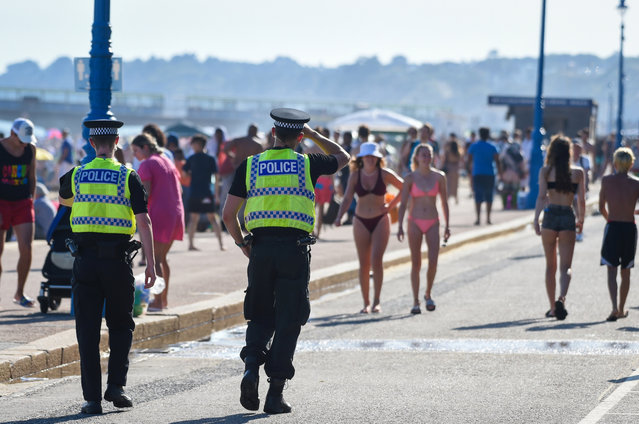 Police patrol the beach on June 25, 2020 in Bournemouth, United Kingdom. A major incident was declared by the local council as thousands flocked to Bournemouth and the Dorset coast. The UK is experiencing a summer heatwave, with temperatures in many parts of the country expected to rise above 30C and weather warnings in place for thunderstorms at the end of the week. (Photo by Finnbarr Webster/Getty Images) 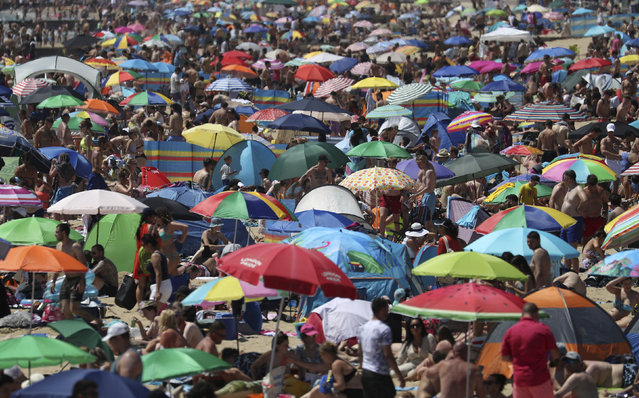 Crowds gather on the beach in Bournemouth, England, Thursday June 25, 2020, as coronavirus lockdown restrictions have been relaxed. According to weather forecasters Thursday could be the UK's hottest day of the year, so far, with scorching temperatures forecast to rise even further. (Photo by Andrew Matthews/PA Wire via AP Photo) 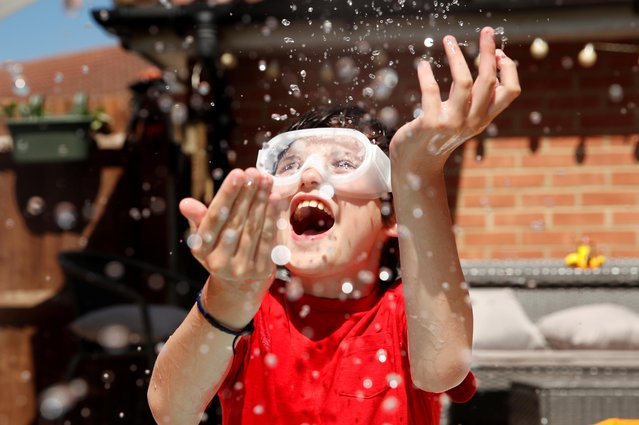 Noah, 10, cools himself off in his garden during hot weather in Hertford, Britain, June 25, 2020. The UK is experiencing a summer heatwave, with temperatures in many parts of the country expected to rise above 30°C and weather warnings in place for thunderstorms at the end of the week. (Photo by Andrew Couldridge/Reuters)
Edit Del
27 Jun 2020 00:07:00, post received 0 comments
Publication archive:
←   →
Popular tags:
All tags
Last searches: