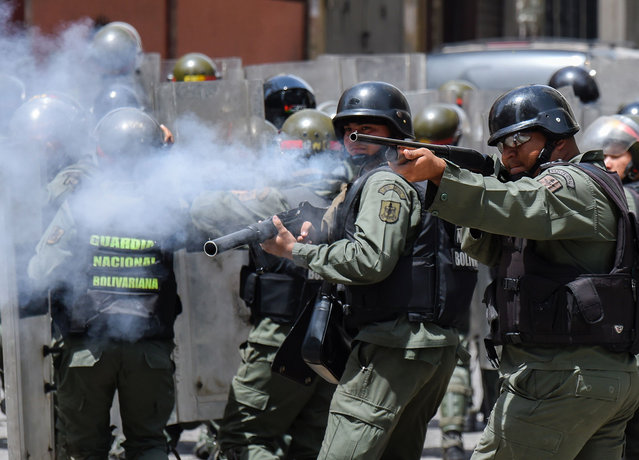 Security forces clash with people trying to reach Miraflores presidential palace to protest against the severe food and medicine shortages, in Caracas on June 2, 2016. Venezuelans face long lines at supermarkets tightly guarded by nervous soldiers, bare shelves and soaring prices inside, a dysfunctional health care system short on basic medications and supplies, daily power cuts of four hours across most of the country, and a government that only operates two days a week to save electricity. (Photo by Juan Barreto/AFP Photo) In this October 1, 1975, file photo, spray flies from the head of Joe Frazier as Muhammad Ali connects with a right in the ninth round of their title fight in Manila, Philippines, Ali won the fight on a decision to retain the title. The two fought three times, including two of the most famous matches ever. Ali was hospitalized in Scottsdale on June 2, 2016 with a respiratory condition. His condition was initially described as “fair”. The following day, Ali's condition worsened, and he was placed on life support. His condition did not improve, and late on June 3, it was announced that Ali had died at the age of 74. (Photo by Mitsunori Chigita/AP Photo) 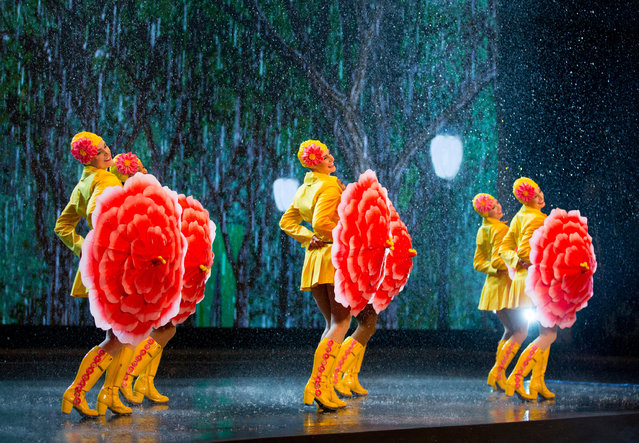 The Radio City Rockettes rehearsing their new show with colourful costumes by Dominican designer Emilio Sosa and a prominent role for young actress Jenna Ortega, of Mexican and Puerto Rican descent in New York, US on June 3, 2016. (Photo by Dan Niver/AP Photo) 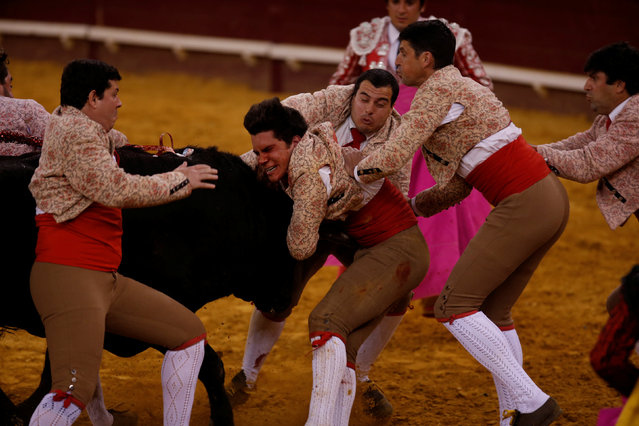 Members of the Coruche forcados group perform during a bullfight at Campo Pequeno bullring in Lisbon, Portugal June 2, 2016. (Photo by Rafael Marchante/Reuters) 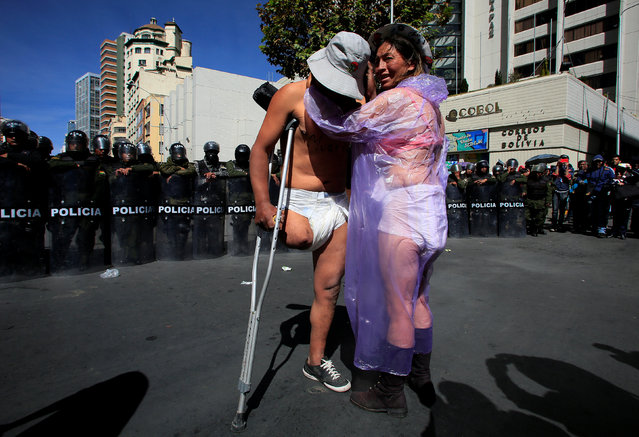 Demonstrators with a physical disability stand in front a riot police barricade during a protest calling on the government to provide a monthly subsidy for the physically disabled rather than an annual one, in El Alto, Bolivia, June 3, 2016. (Photo by David Mercado/Reuters) 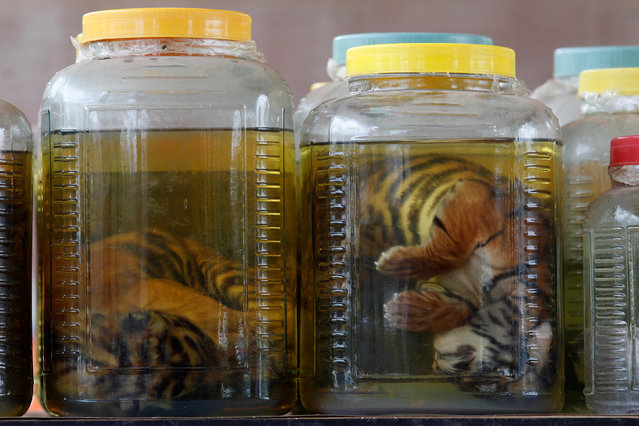 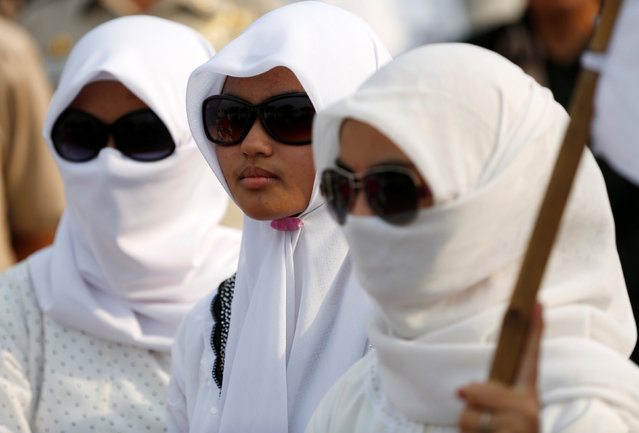 Indonesian women attend a rally by Muslim organizations against communism and atheism outside the presidential palace in Jakarta, Indonesia June 3, 2016. (Photo by Darren Whiteside/Reuters) 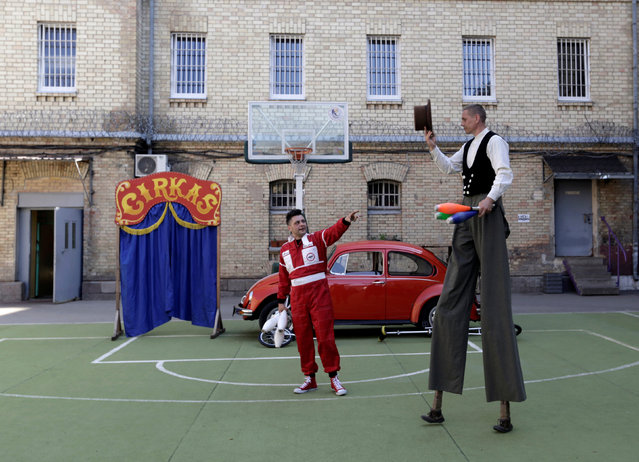 Circus artist Viaceslavas Mickevicius (L) and inmate Darius Braziunas perform during their first circus performance to an audience of visiting relatives in a prison in Vilnius, Lithuania, June 3, 2016. (Photo by Ints Kalnins/Reuters) 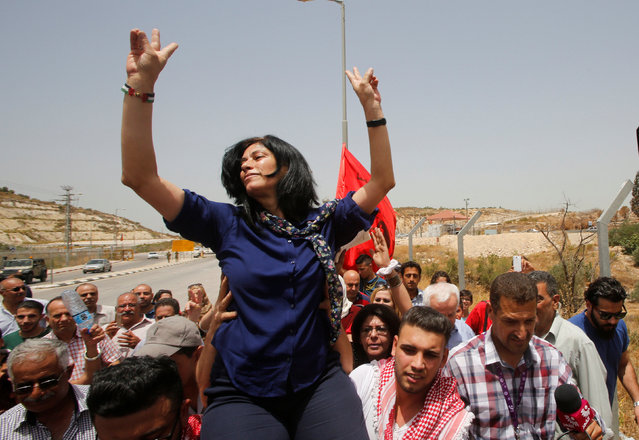 Palestinian lawmaker Khalida Jarrar gestures as she is carried by Palestinian activists following her release from an Israeli jail at Israeli Jbara checkpoint near the West Bank city of Tulkarm June 3, 2016. (Photo by Abed Omar Qusini/Reuters) 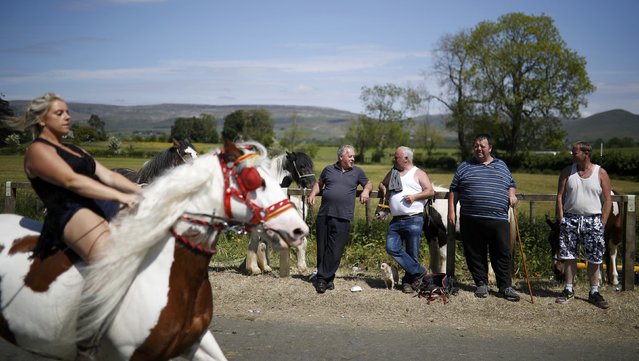 Members of the traveller community watch as horses are ridden along the road during the horse fair in Appleby-in-Westmorland, northern Britain, June 3, 2016. (Photo by Phil Noble/Reuters) 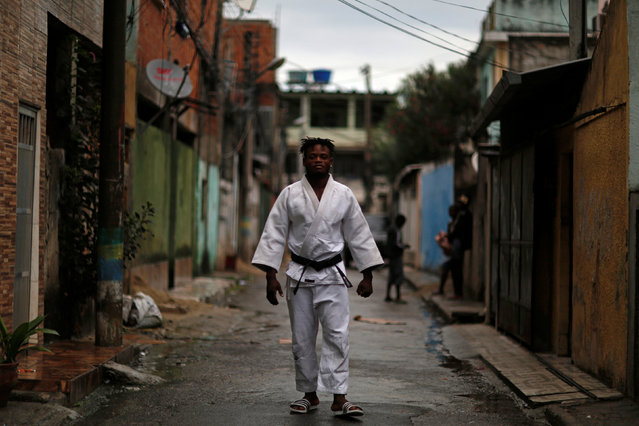 Popole Misenga, a refugee from the Democratic Republic of Congo and a judo athlete, poses for a photo near his home in a slum in Rio de Janeiro, Brazil, June 2, 2016. (Photo by Pilar Olivares/Reuters) 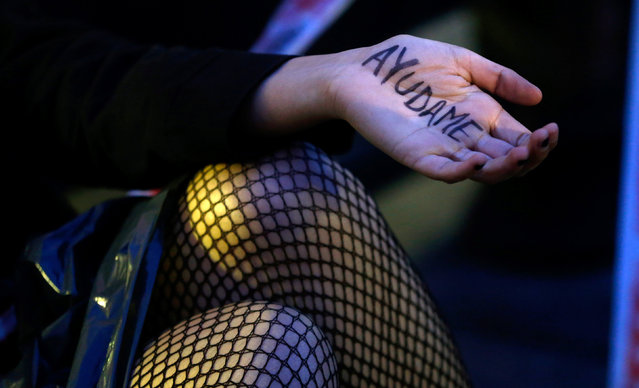 A woman shows her hand with the words “Help Me” written on it during a demonstration to demand policies to prevent femicides outside the Congress in Buenos Aires, Argentina, June 3, 2016. (Photo by Marcos Brindicci/Reuters) 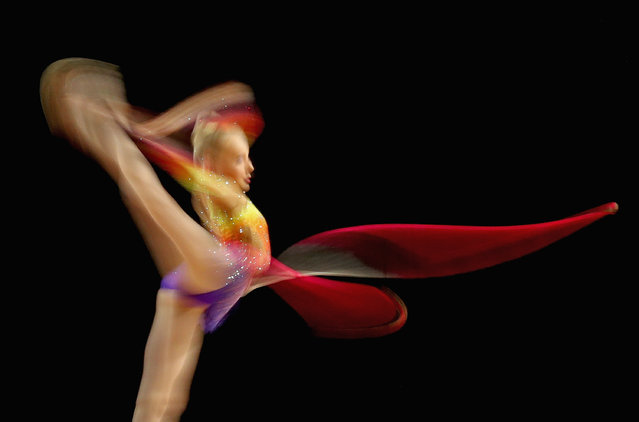 Chloe Hay of Victoria competes with the rope in the rhythmic gymnastics during the 2016 Australian Gymnastics Championships at Hisense Arena on June 03, 2016 in Melbourne, Australia. (Photo by Quinn Rooney/Getty Images) 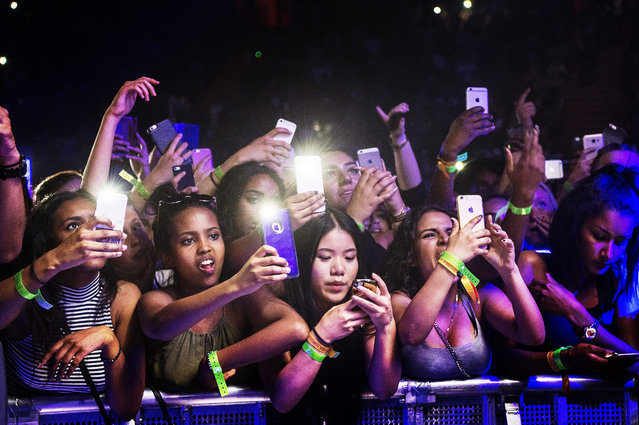 Fans take in a Chris Brown concert with their phones in Stockholm, Sweden on June 03, 2016. (Photo by IBL/Rex Features/Shutterstock) 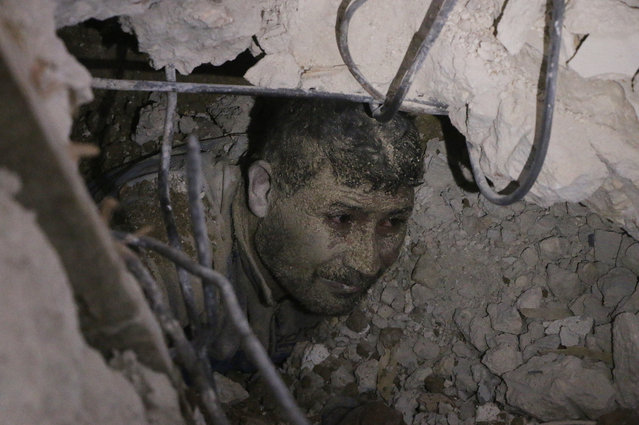 Search and rescue team members try to recover a man under the debris after Assad forces' air-strikes over civilians in residential areas in Heleq Neighborhood of Aleppo, Syria on June 02, 2016. (Photo by Beha el Halebi/Anadolu Agency/Getty Images) 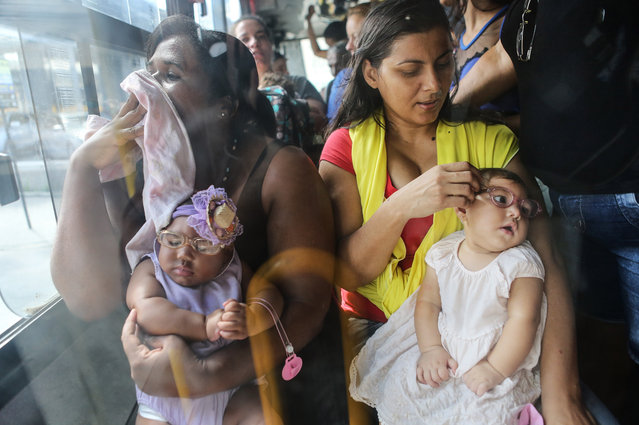 Mothers Jusikelly (R) and Inabela hold their daughters Luhandra (R) and Graziella, both born with microcephaly, as they wear their new glasses on a bus ride after a clinic visit on June 2, 2016 in Recife, Brazil. Microcephaly is a birth defect linked to the Zika virus where infants are born with abnormally small heads. Some of these infants are also suffering from vision problems in Brazil. Mothers often must ride many hours on buses to take their children for medical visits. The Brazilian city of Recife and surrounding Pernambuco state remain the epicenter of the Zika virus outbreak, which has now spread to many countries in the Americas. A group of health experts recently called for the Rio 2016 Olympic Games to be postponed or cancelled due to the Zika threat but the WHO (World Health Organization) rejected the proposal. (Photo by Mario Tama/Getty Images) 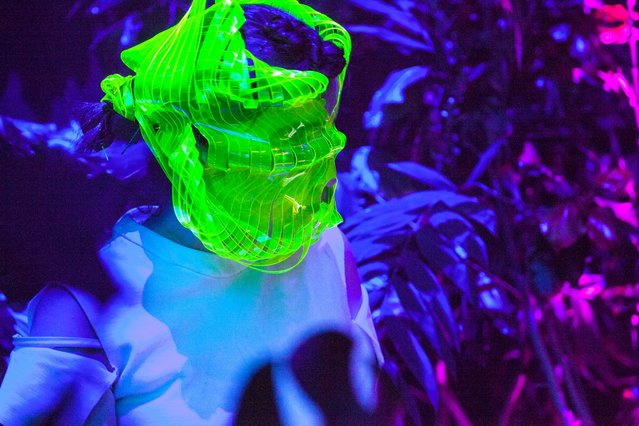 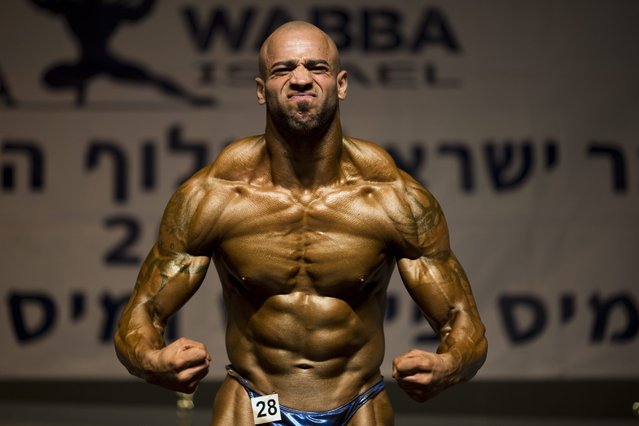 Israeli-Arab contestant Mohammed Ammar flexes his muscles and strikes a pose on stage as Israelis and Arabs perform during the Israel body building contest in Nesher near Haifa, Israel, 02 June 2016. (Photo by Abir Sultan/EPA) 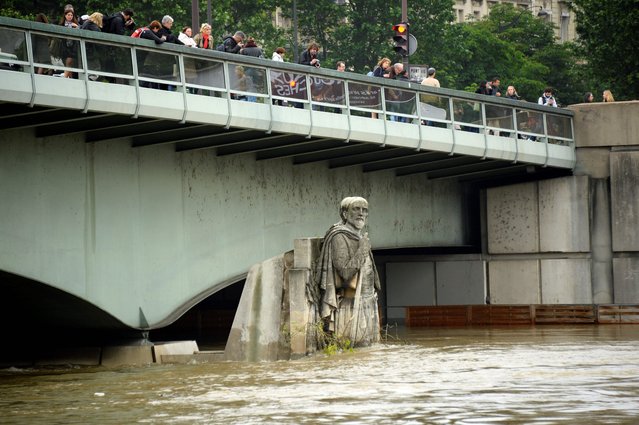 This picture taken on June 2, 2016 shows the Zouave statue of the Alma bridge flooded by the river Seine following heavy rainfalls in Paris. Torrential downpours have lashed parts of northern Europe in recent days, leaving four dead in Germany, breaching the banks of the Seine in Paris and flooding rural roads and villages. (Photo by Bertrand Guay/AFP Photo) 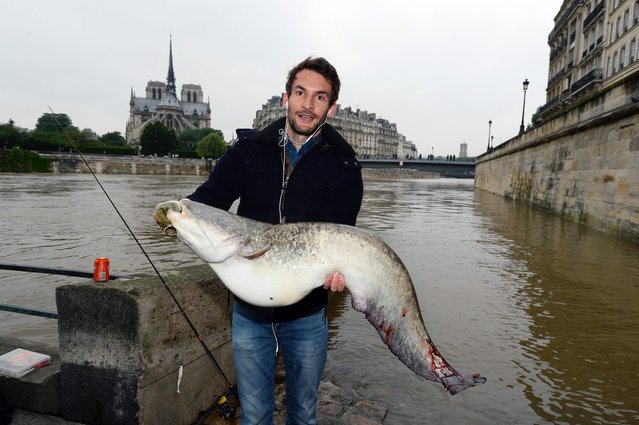 A man fishes on the flooded banks of the river Seine following heavy rainfalls in Paris on June 2, 2016. (Photo by Bertrand Guay/AFP Photo) 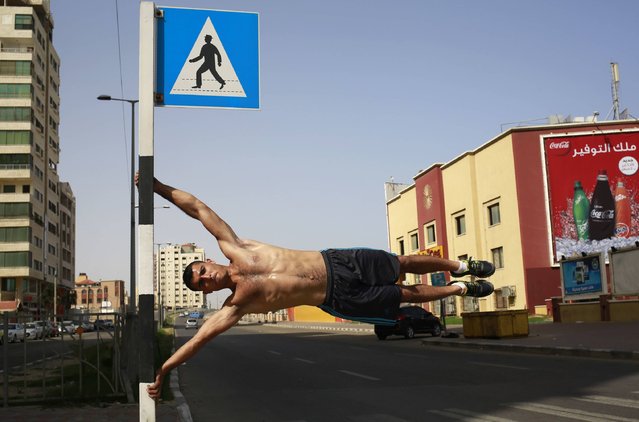 Baker Magadma, a member of Palestinian sports group Bar Palestine, performs on the street in Gaza City, on June 3, 2016. Street workout, which is still new in Gaza, is a growing sport across the world with annual competitions and events. (Photo by Mohammed Abed/AFP Photo) 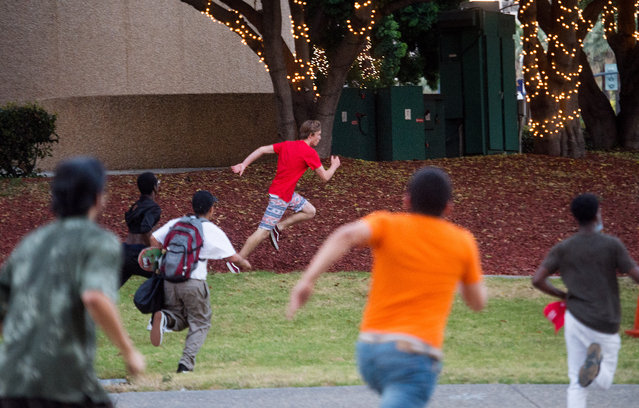 Protesters against Republican presidential candidate Donald Trump chase a man leaving a Trump campaign rally on Thursday, June 2, 2016, in San Jose, Calif. A group of protesters attacked Trump supporters who were leaving the presidential candidate's rally in San Jose on Thursday night. A dozen or more people were punched, at least one person was pelted with an egg and Trump hats grabbed from supporters were set on fire on the ground. (Photo by Noah Berger/AP Photo) 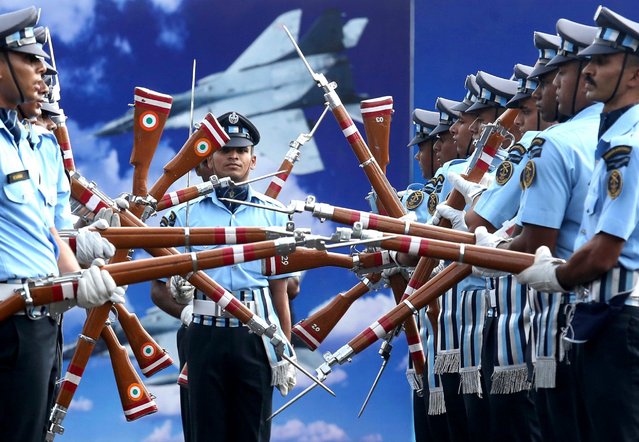 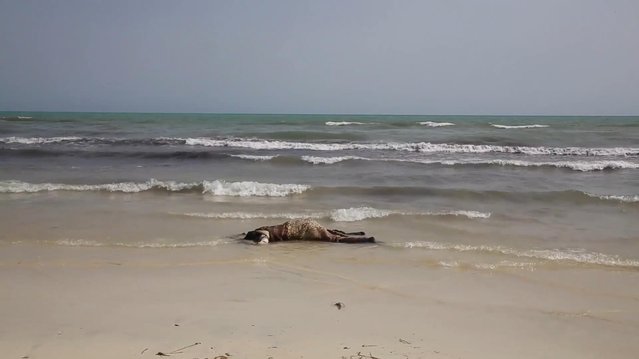 The lifeless body of a migrant lays on the beach near the western city of Zwara, Libya, Thursday June 2, 2016, as rescue workers begin to retrieve some of the more than 100 bodies pulled from the sea, after a smuggling boat carrying mainly African migrants sank into the Mediterranean. Libya's navy spokesman Col. Ayoub Gassim says, Friday June 3, that the bodies of more than 100 migrants have been retrieved, but the death toll is likely to be higher. (Photo by APTV via AP Photo) 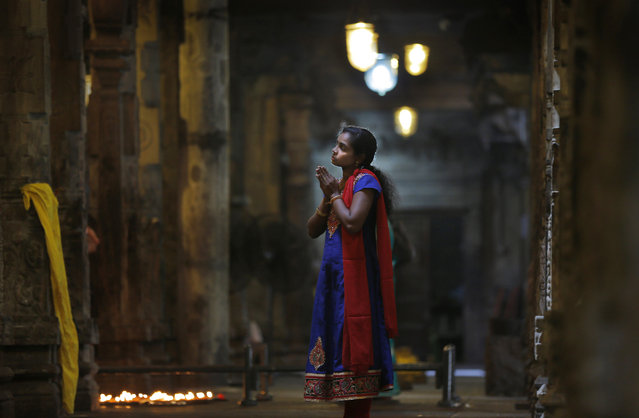 In this June 3, 2016, photo, a Sri Lankan ethnic Tamil woman prays at a Hindu temple in Colombo, Sri Lanka, Friday, June 3, 2016. For the hundreds of thousands of minority ethnic Tamils, the Sri Lankan government's repeated promises of post-war reconciliation ring false, even as authorities take tentative steps toward fulfilling some of them. Many expected a new era of healing and atonement when President Maithripala Sirisena took office in 2015, but progress has been slow as he cautiously balances the Tamils' anguished demands with the persistent fears of the Sinhalese majority. (Photo by Eranga Jayawardena/AP Photo) 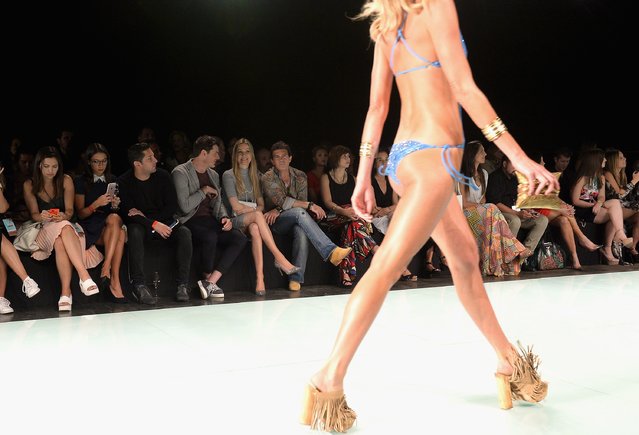