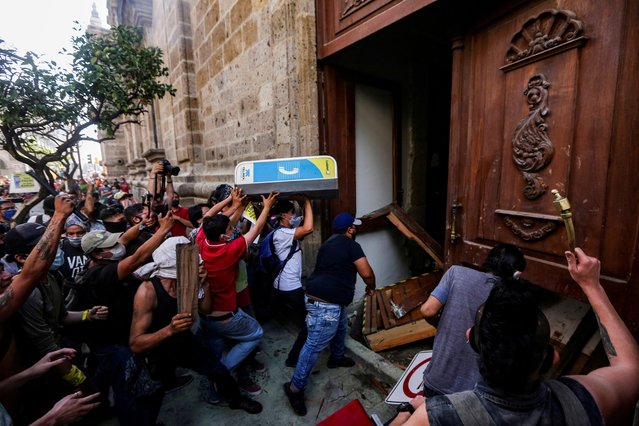 Demonstrators smash down a door of the Jalisco State Government Palace during a protest to demand justice for Giovanni Lopez, a construction worker who died after being arrested for not wearing a face mask in public, during the coronavirus disease (COVID-19) outbreak in Guadalajara, Mexico on June 4, 2020. (Photo by Fernando Carranza/Reuters) 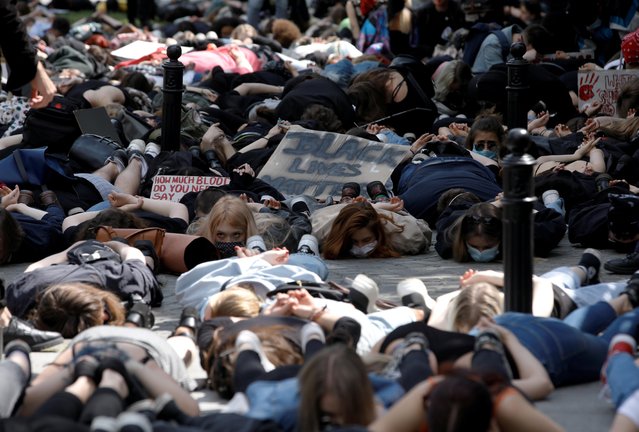 Demonstrators lie on the ground during a protest over police brutality towards African-Americans in the United States, after the death of George Floyd in Minneapolis police custody, in front of the U.S. embassy in Warsaw, Poland, June 4, 2020. (Photo by Kacper Pempel/Reuters) 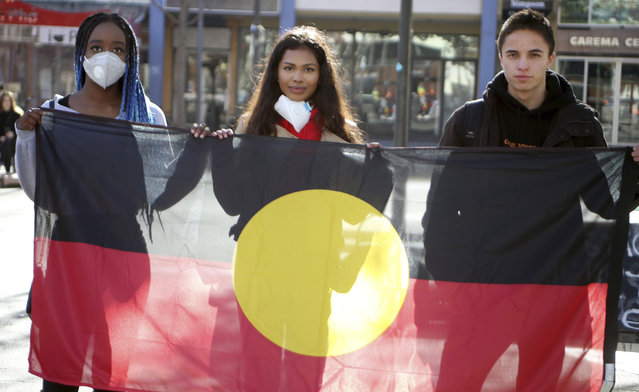 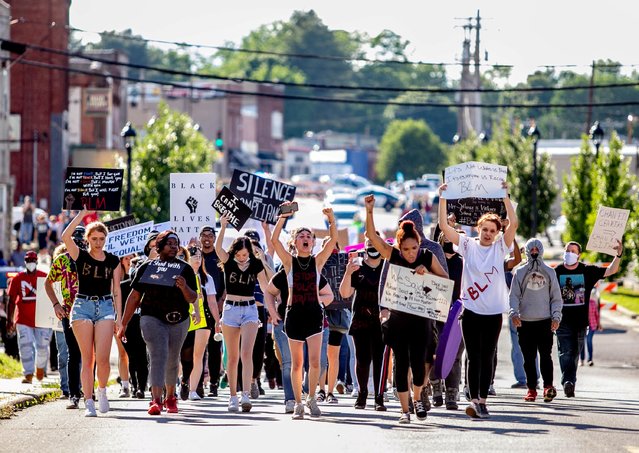 Protesters rally against the death in Minneapolis police custody of George Floyd in Anna, Illinois on June 4, 2020. Before sundown, around 150 protesters marched down the main street in Anna, past Bob's Tavern, Oasis of Grace Church, Douglas Skating Rink and Casey's General Store holding homemade signs and chanting “black lives matter”. Nearly a century ago this southern Illinois town of 4,200 residents expelled most of its African-American residents, according to historians. (Photo by Brian Munoz/Reuters) 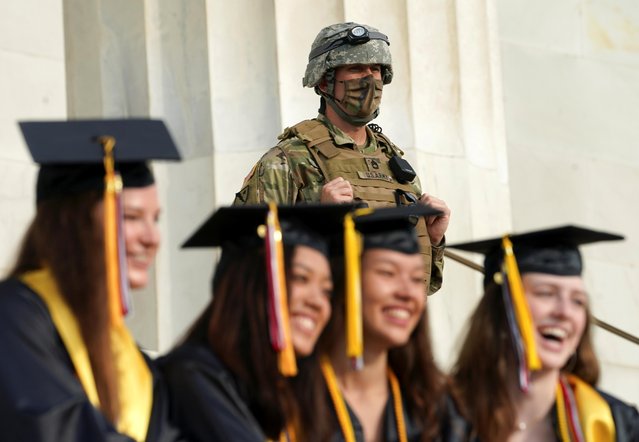 A soldier keeps watch for activity following the death in Minneapolis police custody of George Floyd as graduates from Virginia's James Madison High School pose for photos at the Lincoln Memorial in Washington, U.S., June 5, 2020. (Photo by Kevin Lamarque/Reuters) 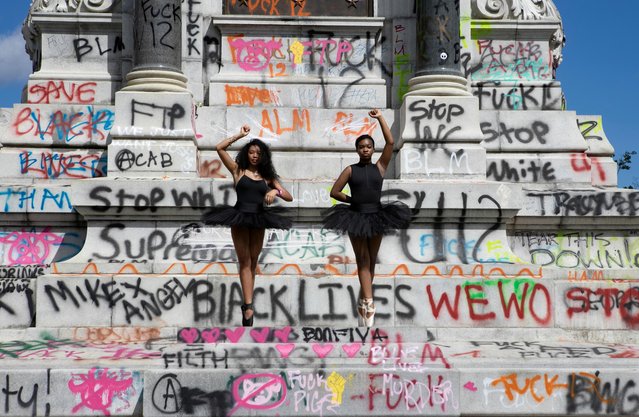 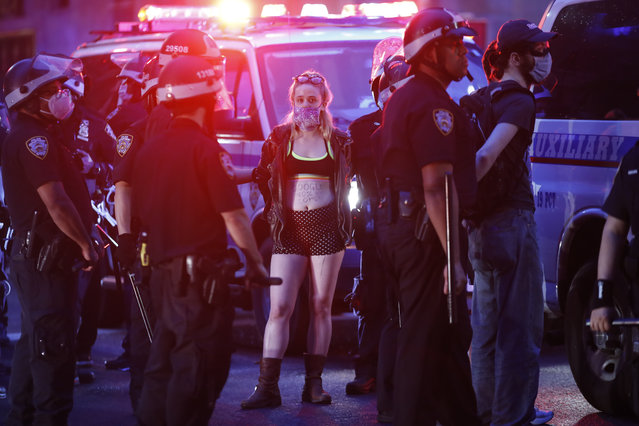 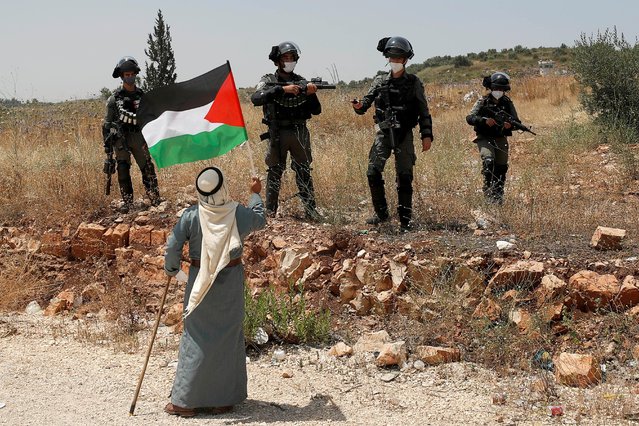 A demonstrator holds a Palestinian flag in front of Israeli forces during a protest against Israel's plan to annex parts of the occupied West Bank, near Tulkarm on June 5, 2020. (Photo by Mohamad Torokman/Reuters) 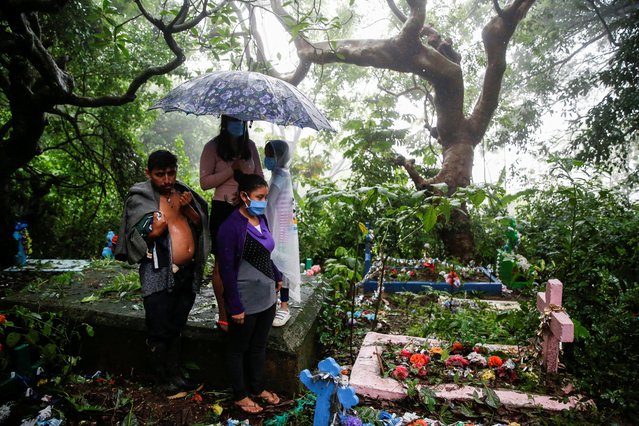 Relatives take part in the funeral of Fredy Amilcar Gomez Blanco and Jason Eulises Gomez Gomez, who died after they were dragged by river flooding caused by Tropical Storm Amanda, in Santa Tecla, El Salvador on June 4, 2020. (Photo by Jose Cabezas/Reuters) 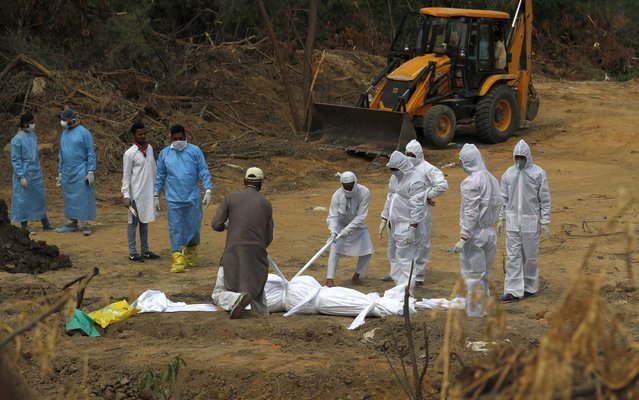 Relatives use ropes to lower the body of a person who died of COVID-19, into a freshly dug grave at a cemetery in New Delhi, India, Friday, June 5, 2020. More states opened up and crowds of commuters trickled onto the roads in many of India's cities as a three-phase plan to lift the nationwide coronavirus lockdown started despite an upward trend in new infections. (Photo by Manish Swarup/AP Photo) 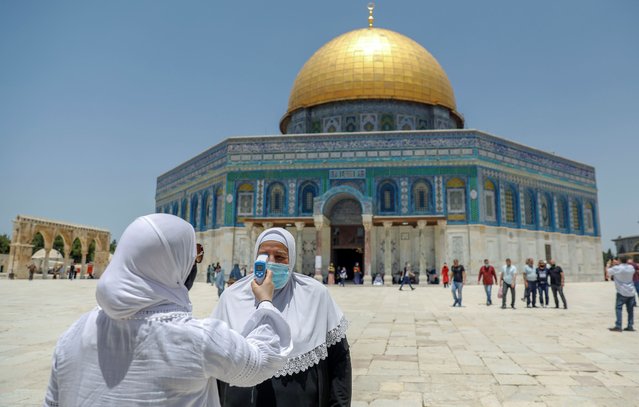 A woman checks another's temperature as Palestinian Muslims attend the first Friday prayers after a 69-day closure due to the novel coronavirus pandemic, outside the Dome of the Rock Mosque, in Jerusalem's Al-Aqsa mosques compound, on June 5, 2020. (Photo by Ahmad Gharabli/AFP Photo) 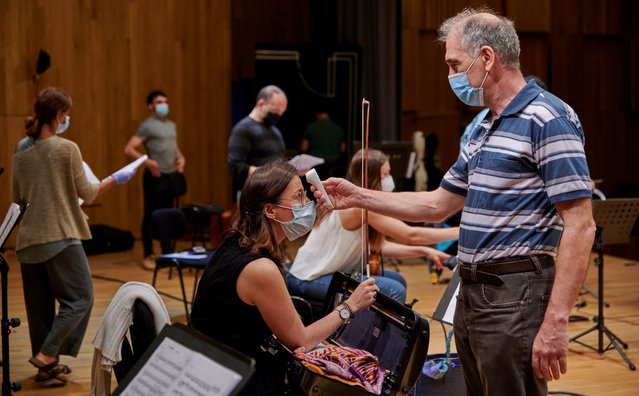 The conductor of the Cascais & Oeiras Chamber Orchestra, Maestro Nikolay Lalov, takes a member's body temperature during a rehearsal in the Auditório da Senhora da Boa Nova the day before their first performance before a live audience during the COVID-19 Coronavirus pandemic on June 05, 2020 in Cascais, Portugal. This concert will be the first in Portugal since the beginning of the pandemic and is being performed on June 6 for the occasion of Cascais Day, the 656th anniversary of the city, as the country is coming back to life with the third phase of the de-confinement that started on June 02. (Photo by Horacio Villalobos/Corbis via Getty Images) 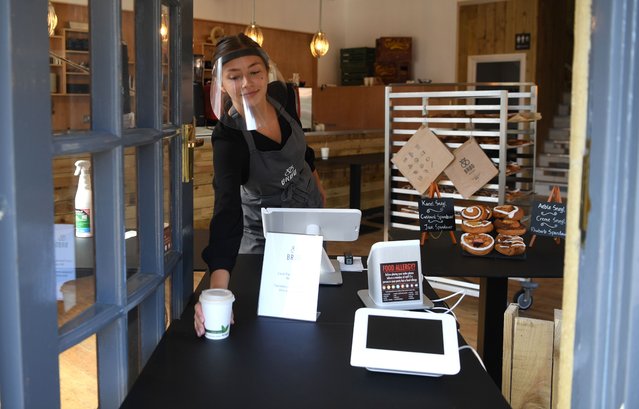 A shop assistant serves a takeaway Flat White coffee whilst wearing a safety visor at Brod Danish bakery and coffee shop on June 05, 2020 in Penarth, Wales. The British government further relaxed Covid-19 quarantine measures in England this week, allowing groups of six people from different households to meet in parks and gardens, subject to social distancing rules but under Welsh lockdown rules two separate households can meet outdoors maintain social distancing only if you stay in your local area. (Photo by Stu Forster/Getty Images) 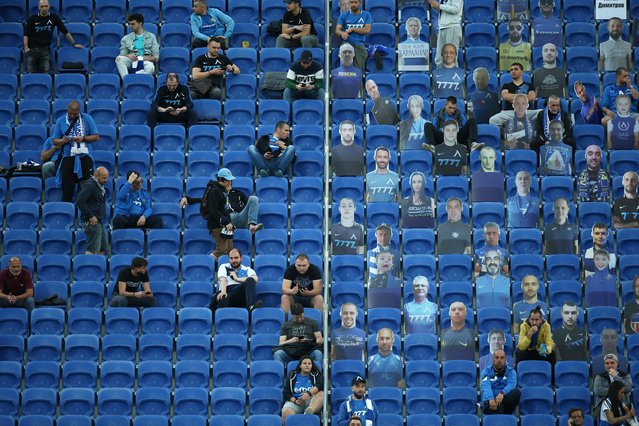 Levski Sofia fans are seen among cardboard cutouts in the stands before the match against Ludogorets, as play resumes following the outbreak of the coronavirus, on June 5, 2020 in Sofia, Bulgaria. (Photo by Stoyan Nenov/Reuters) 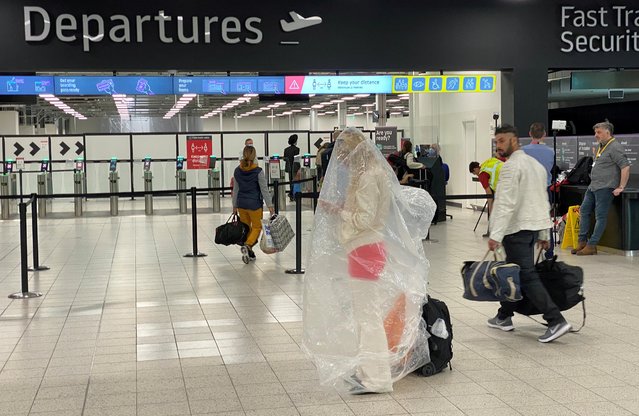 A passenger covered with a plastic bag is seen at Luton Airport, following the outbreak of the coronavirus disease (COVID-19), Luton, Britain, June 4, 2020. (Photo by Paul Childs/Reuters) 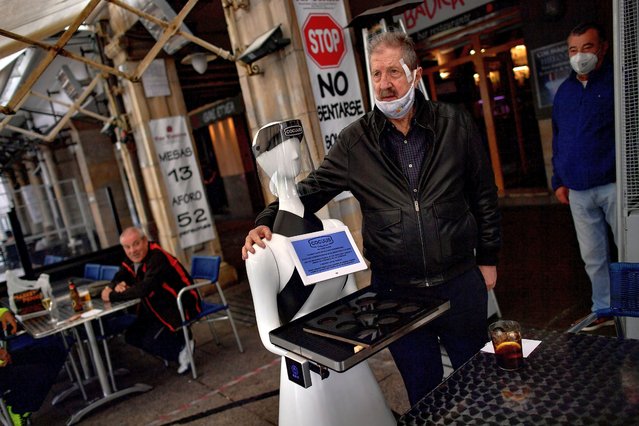 A robot known as “Alexia” attends customers as one of them poses for a photograph with the robot in a bar at Plaza del Castillo square, in Pamplona, northern Spain, Friday, June 5, 2020. This robot tries to be an innovation to accept the new rules for all bars and restaurants by the crisis of the coronavirus. (Photo by Alvaro Barrientos/AP Photo) 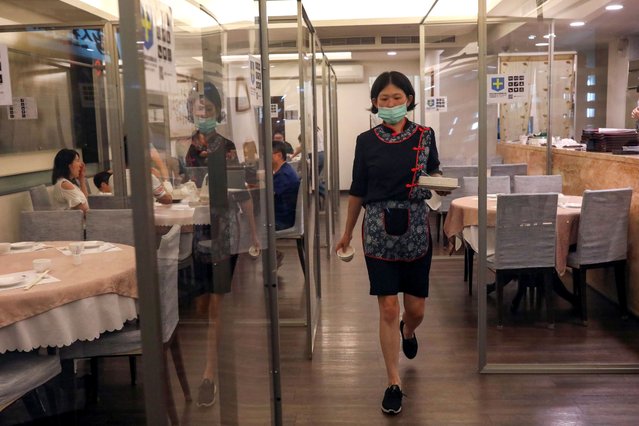 A staff member walks by plastic dividers installed to protect customers from the coronavirus disease (COVID-19) spread, in a restaurant in Taipei, Taiwan, June 5, 2020. (Photo by Ann Wang/Reuters) 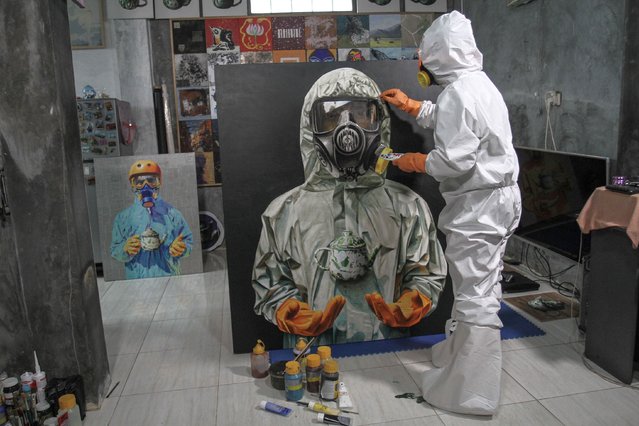 An artist wearing a protective suit paints a picture of a health worker as an appreciation for the service amid the coronavirus disease (COVID-19) outbreak in Sleman, Yogyakarta Province, Indonesia, June 5, 2020. (Photo by Hendra Nurdiyansyah/Antara Foto via Reuters) 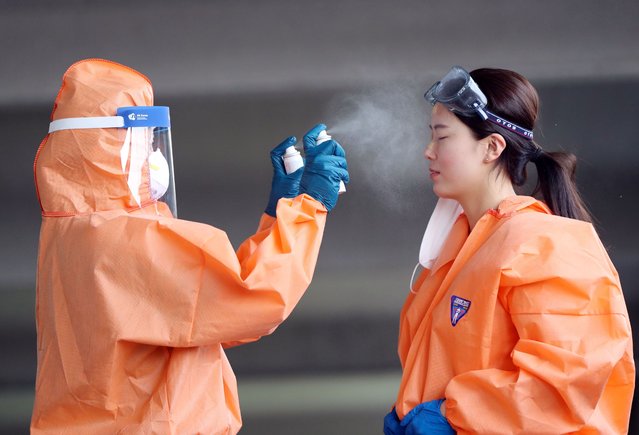 A medical worker in protective gear sprays mist on her colleague during a hot day at an outdoor clinic for coronavirus tests at a public health facility in the southwestern city of Gwangju, South Korea, 05 June 2020. (Photo by Yonhap/EPA/EFE) 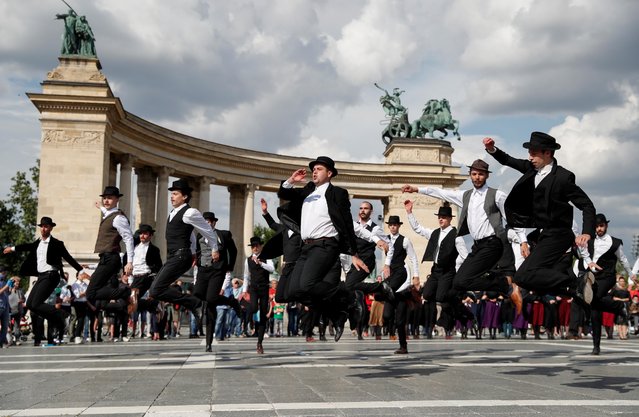