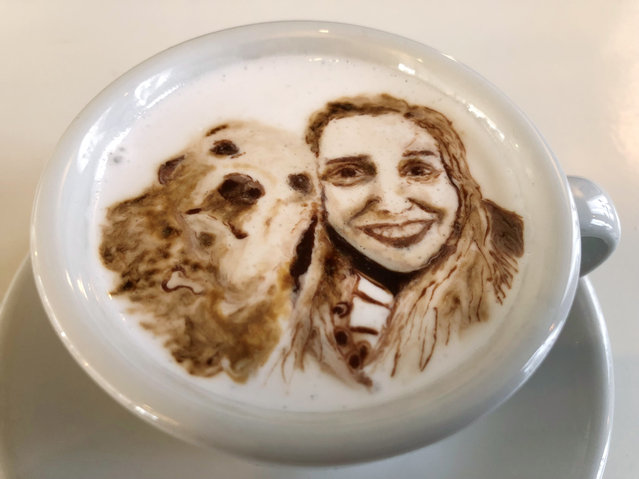 This March 1, 2018, photo shows a portrait of Associated Press writer Ashley Thomas with her dog Sandra, designed atop a cup of cold java by Barista Lee Kang Bin at his coffee shop in Seoul, South Korea. The South Korean barista is charming customers at his coffee shop by drawing intricate artworks on the foamy cream toppings of their drinks. (Photo by Dino Hazell/AP Photo) In this March 1, 2018, photo, Barista Lee Kang Bin applies the finishing touches to a recreation of a couple's Niagara Falls vacation photo, at his coffee shop in Seoul, South Korea. (Photo by Dino Hazell/AP Photo) 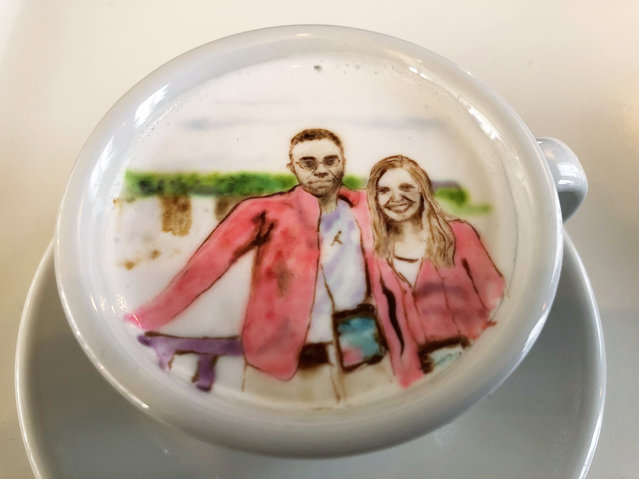 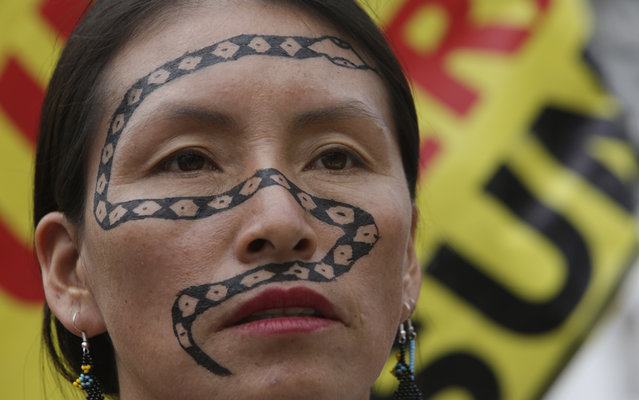 In this March 13, 2018 photo, Salome Aranda, an indigenous woman from the Amazonian town of Morete Cocha, wears a painting of a snake on her face during a demonstration against mining and oil drilling in the Amazon, outside government palace in Quito, Ecuador. Amazonian women are demanding, for a second day in a row, to meet with President Lenin Moreno about the issues. (Photo by Dolores Ochoa/AP Photo) 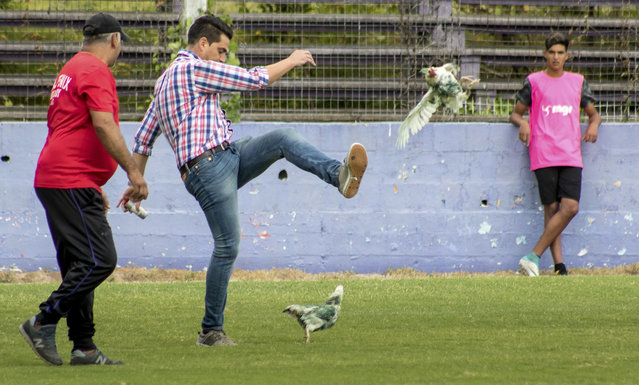 In this Sunday, March 11, 2018 photo, Fenix first-division club director Gaston Alegari kicks a hen after supporters from his club threw two chickens painted in white and green, the colors of the opponents Racing, on to the field during their league soccer match, in Montevideo, Uruguay. Uruguay's soccer association decided on Tuesday that Fenix will have to play one match away from their home stadium because of the incident. The incident has also made Alegari a target of criticism from animal rights groups and fans after he violently kicked one of the chickens off the pitch. (Photo by Mauricio Castillo/AP Photo) 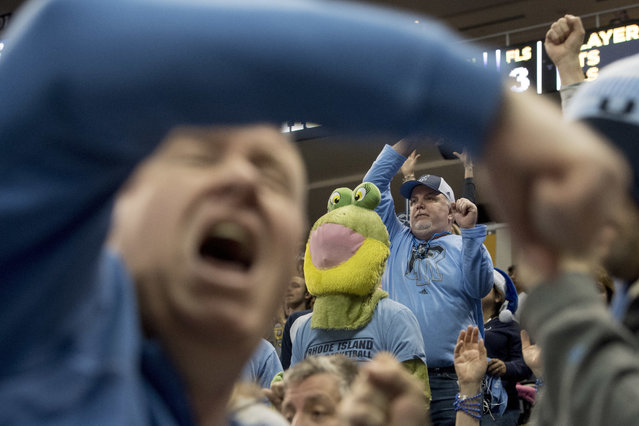 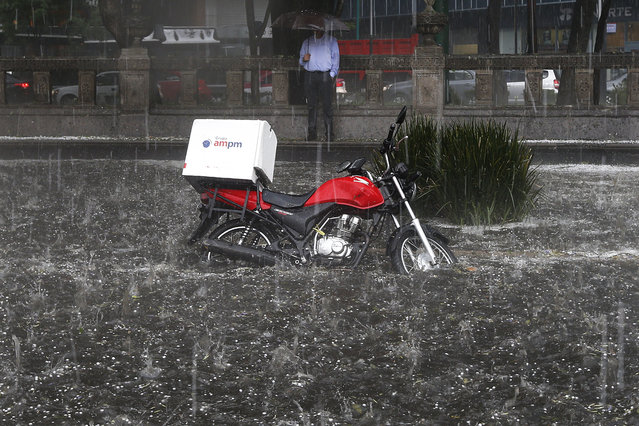 In this March 14, 2018 photo, a man takes cover under his umbrella as a violent rain storm flooded Reforma Avenue and dumped massive amounts of hail on much of in Mexico City. (Photo by Marco Ugarte/AP Photo) 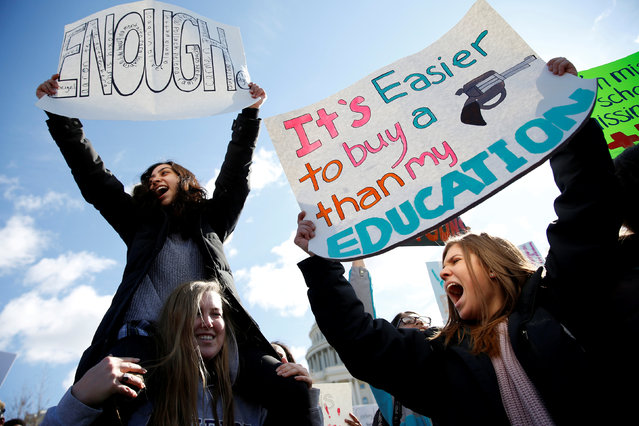 Students from Washington, DC-area schools protest for stricter gun control during a walkout by students at the U.S. Capitol in Washington, U.S., March 14, 2018. (Photo by Joshua Roberts/Reuters) 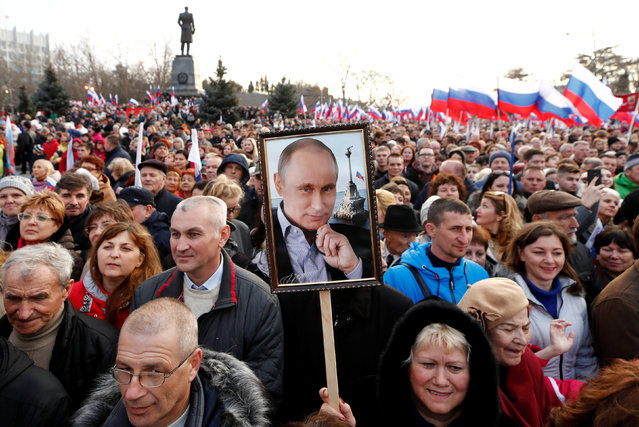 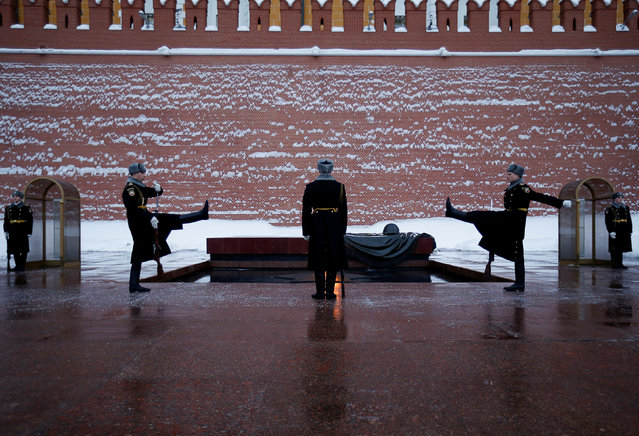 Members of the honour guard march during the changing of guards ceremony at the Tomb of the Unknown Soldier by the Kremlin wall in Moscow, Russia, March 15, 2018. (Photo by David Mdzinarishvili/Reuters) 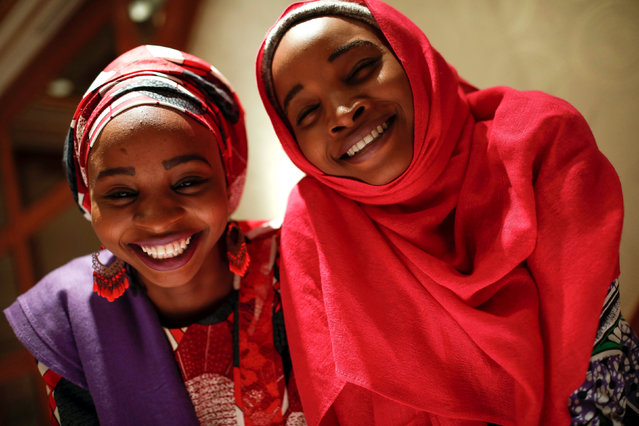 Hauwa (L) and Ya kaka, identified only by their first names, former captives of Boko Haram militants in Nigeria and now acting as advocates speaking out on behalf of other captives and survivors, pose for a portrait after they appeared on a panel dealing with issues of violence against women in New York City, U.S., March 13, 2018. (Photo by Mike Segar/Reuters) 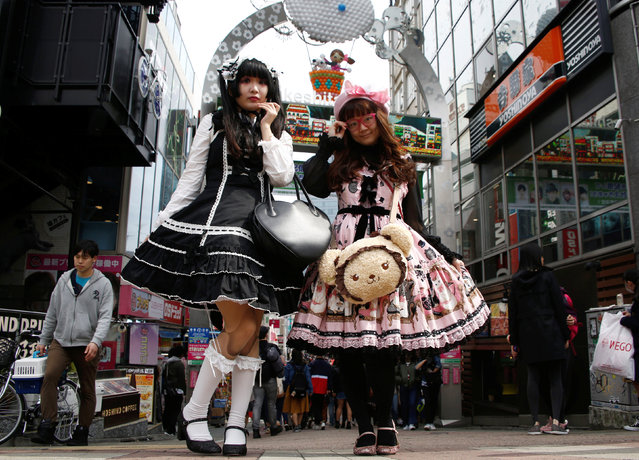 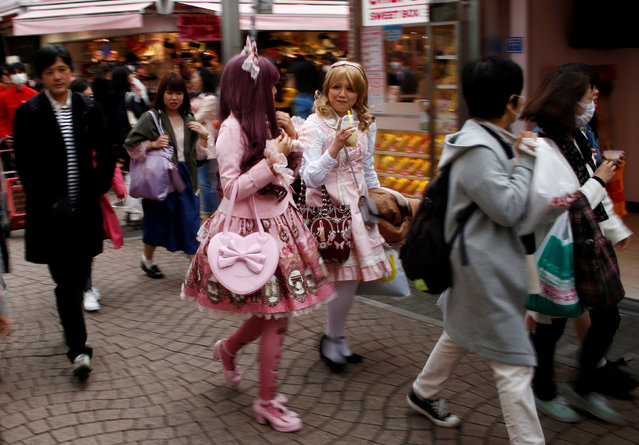 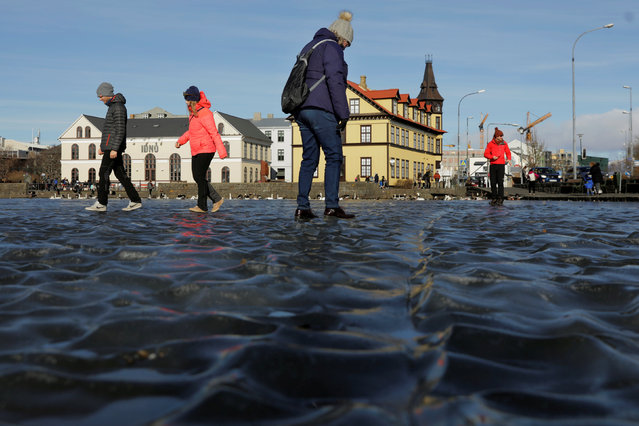 Tourists walk across water frozen into a ripple pattern on Tjornin Pond in Reykjavik, Iceland, March 11, 2018. (Photo by Lucas Jackson/Reuters) 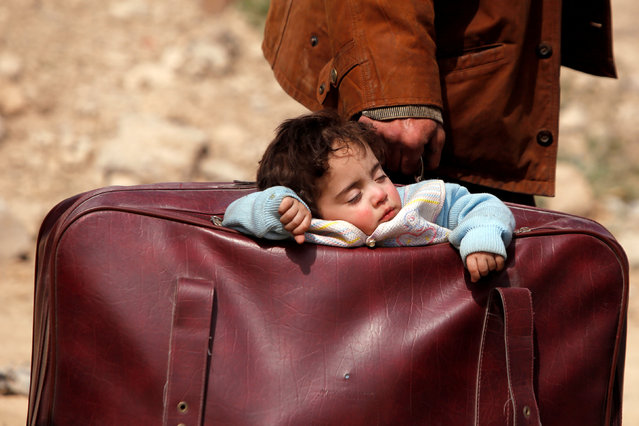 A child sleeps in a bag in the village of Beit Sawa, eastern Ghouta, Syria March 15, 2018. Thousands escaped Syria' s rebel- held Eastern Ghouta into government- held territory AFP correspondents on both sides said, the largest numbers since the regime assault on the enclave began. (Photo by Omar Sanadiki/Reuters) 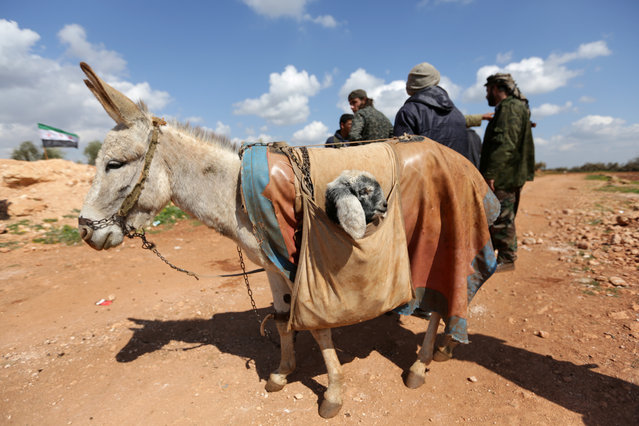 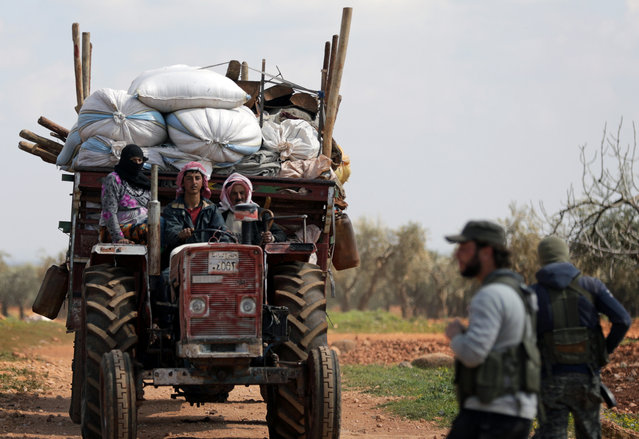 Internally displaced people ride with their belongings in the town of Inab, eastern Afrin, Syria March 14, 2018. (Photo by Khalil Ashawi/Reuters) 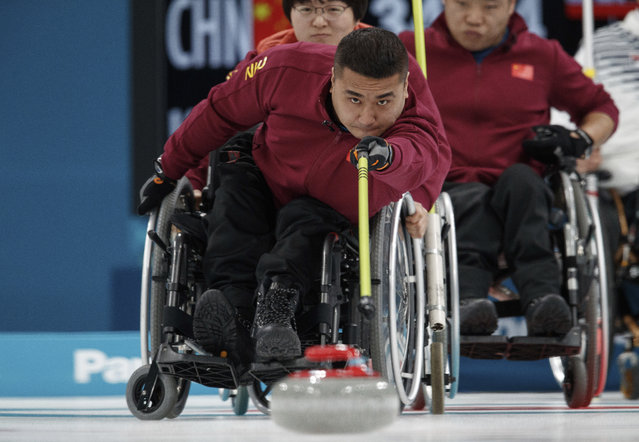 China's Wang Haitao throws the stone during the Wheelchair Curling Round Robin Session against South Korea at the Gangneung Curling Centre in Gangneung at the Paralympic Winter Games, South Korea, Thursday, March 15, 2018. (Photo by Simon Bruty/OIS/IOC via AP Photo) 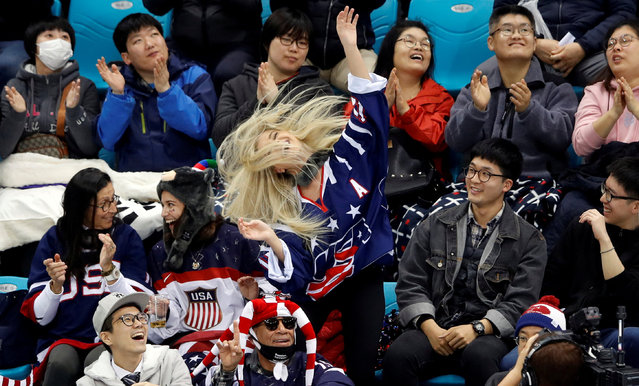 Team U.S. fan dances in the crowd during the ice hockey play- off semi- final game between the US and Italy at the Gangneung Hockey Centre during the Pyeongchang 2018 Winter Paralympic Games in Gangneung on March 15, 2018. (Photo by Carl Recine/Reuters) 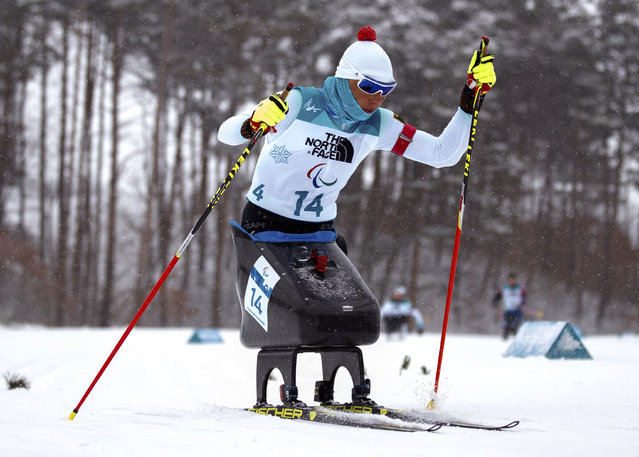 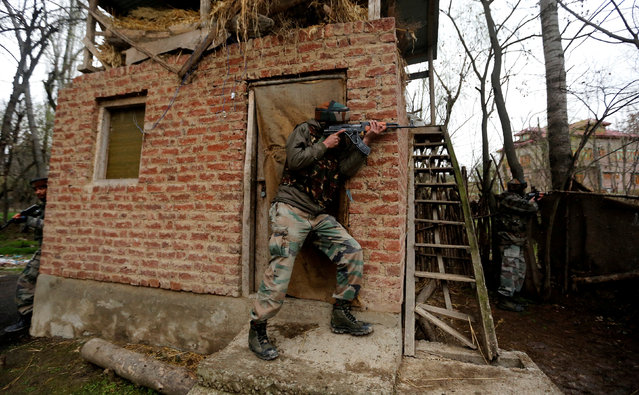 Indian Army soldiers take their positions near the site of a gunbattle, where according to local media suspected militants are holed up, on the outskirts of Srinagar March 15, 2018. A gunfight broke out between suspected militants and government forces at Balhama area of Khanmoh in outskirts of Srinagar city. A cordon- and- search- operation was launched in the area following a militant attack on a Bharatiya Janata Party (BJP) leader that left a policeman injured, officials said. (Photo by Danish Ismail/Reuters) 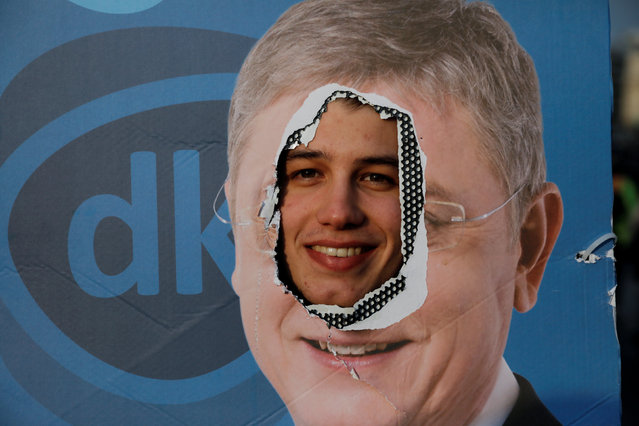 A person with a placard attends a opposition supporters rally during Hungary's National Day celebrations, which also commemorates the 1848 Hungarian Revolution against the Habsburg monarchy, in Budapest, Hungary, March 15, 2018. (Photo by Marko Djurica/Reuters) 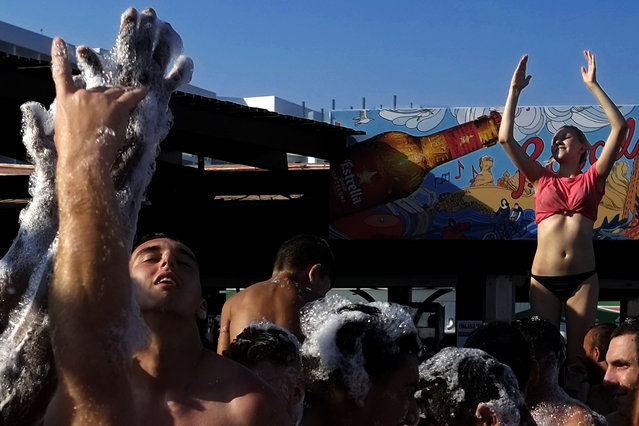 In this photo taken on Sunday July 23, 2017, Tourists dance in the foam at a beach bar in “Nissi beach” in southeast resort of Ayia Napa, Cyprus The mayor of Ayia Napa Yiannis Karousos, the seaside town that has long been a favorite for hundreds of thousands of holidaymakers annually, wants to keep out boorish, ill-mannered louts that he says on Wednesday, March 14, 2018, give his town a bad name and infuriate locals and other tourists alike. (Photo by Petros Karadjias/AP Photo) 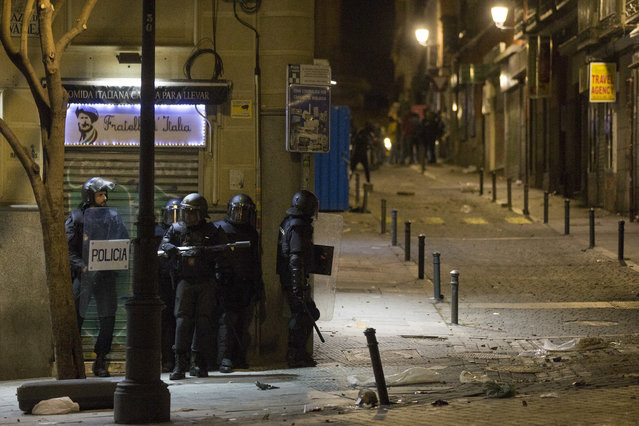 Spanish anti riot police officers in full gear get cover in a corner during clashes with rioters at the Lavapies neighborhood in Madrid, early Friday, March 16, 2018. Rioting has broken in central Madrid over the death of a 35 year-old African hawker who witnesses said had died escaping from local police reining on illegal street sales. (Photo by Francisco Seco/AP Photo) 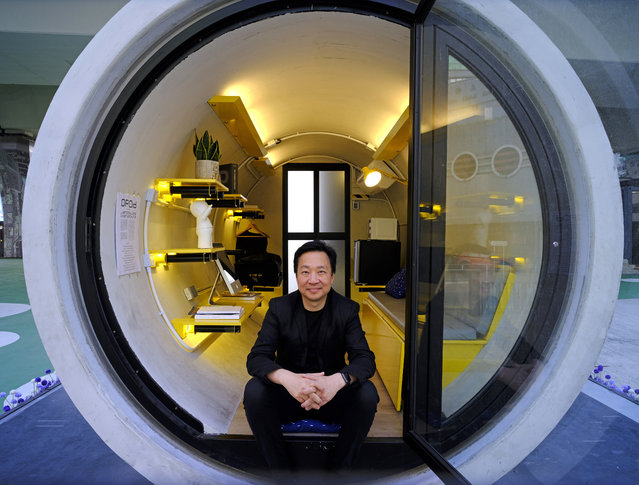 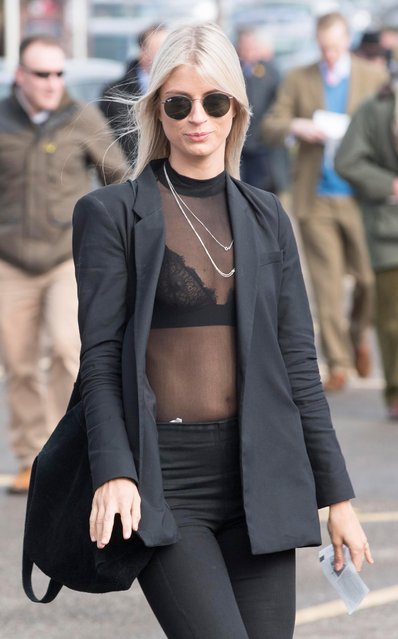 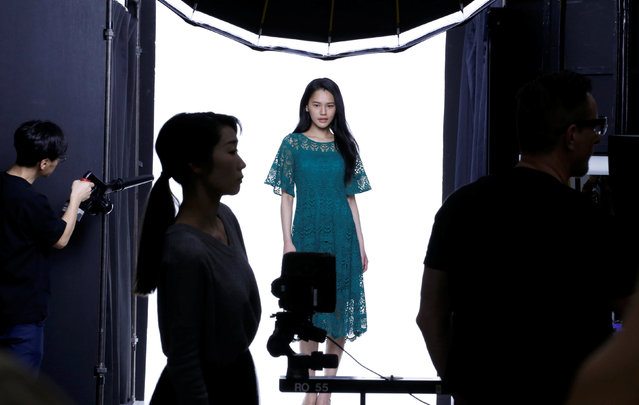 A model is seen during a shooting session for Amazon Fashion at an unveiling of its new photo studio in Tokyo, Japan March 15, 2018. (Photo by Toru Hanai/Reuters) 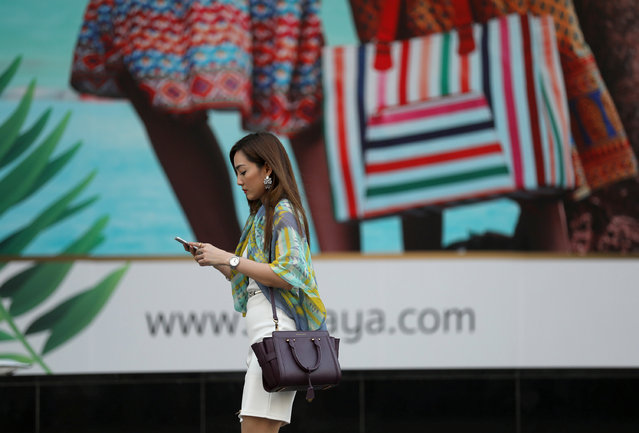 A woman walks past a fashion advertisement poster at a shopping centre in Bangkok, Thailand March 15, 2018. (Photo by Soe Zeya Tun/Reuters) 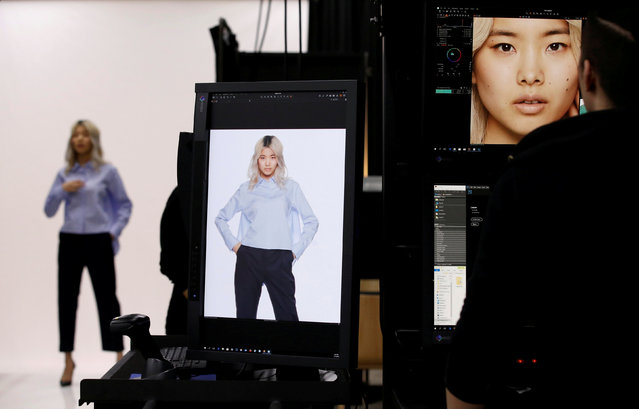