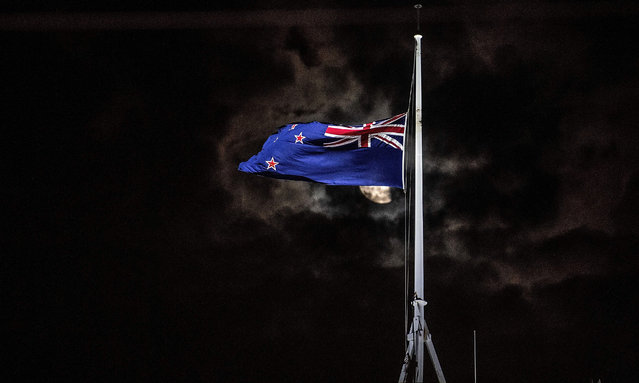 The New Zealand national flag is flown at half-mast on a Parliament building in Wellington on March 15, 2019, after a shooting incident in Christchurch. Attacks on two Christchurch mosques left at least 49 dead on March 15, with one gunman – identified as an Australian extremist – apparently livestreaming the assault that triggered the lockdown of the New Zealand city. (Photo by Marty Melville/AFP Photo) 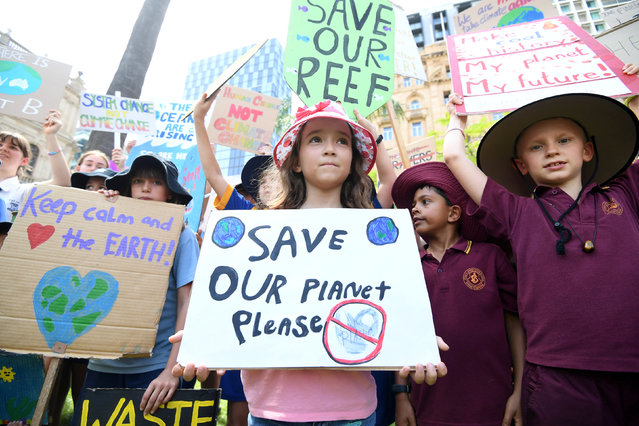 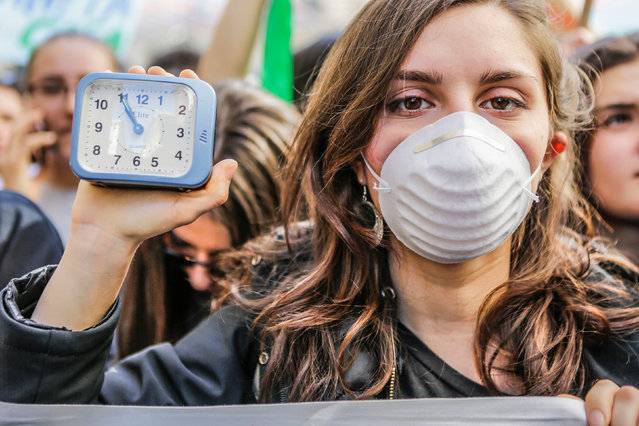 March of students for climate change in Turin, Italy on March 15, 2019. (Photo by Giulio Lapone/Sync/AGF/Rex Features/Shutterstock) 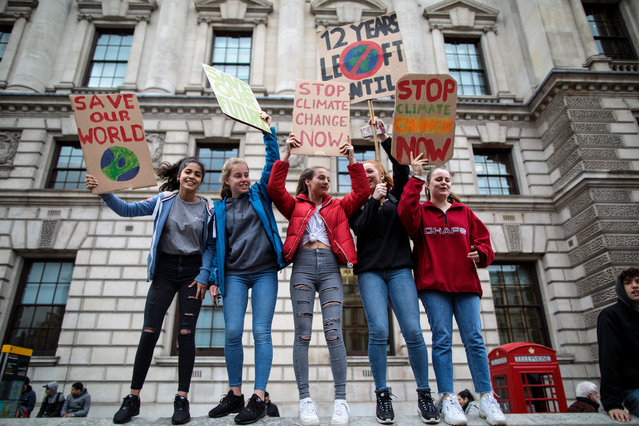 Schoolchildren take part in a student climate protest on March 15, 2019 in London, England. Thousands of pupils from schools, colleges and universities across the UK will walk out today in the second major strike against climate change this year. Young people nationwide are calling on the Government to declare a climate emergency and take action. Similar strikes are taking place around the world today including in Japan and Australia, inspired by 16-year-old Greta Thunberg who criticised world leaders at a United Nations climate conference. (Photo by Jack Taylor/Getty Images) 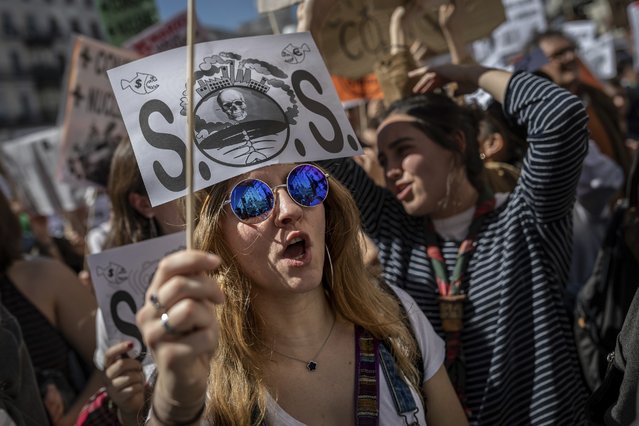 Students shout pro-environment slogans during a rally in Madrid, Spain, Friday March 15, 2019. Students mobilized by word of mouth and social media skipped class Friday to protest what they believe are their governments' failure to take tough action against global warming. (Photo by Bernat Armangue/AP Photo) 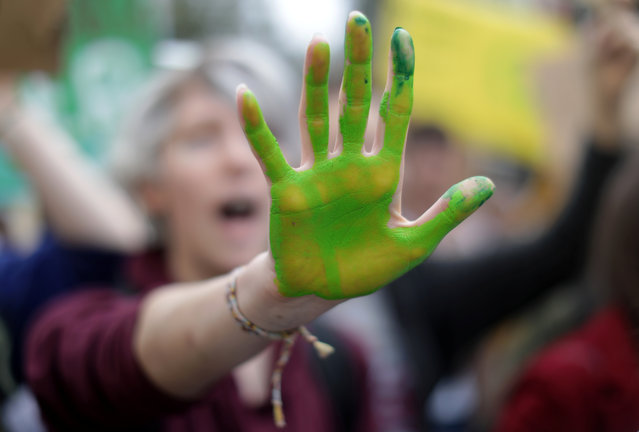 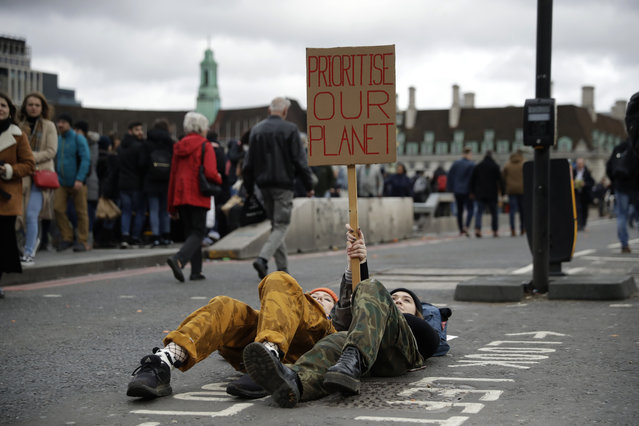 Youngsters lay down as they take part in a student climate protest at the bottom of Westminster Bridge in London, Friday, March 15, 2019. Students in more than 80 countries and territories worldwide plan to skip class Friday in protest over their governments' failure to act against global warming. The coordinated 'school strike' was inspired by 16-year-old activist Greta Thunberg, who began holding solitary demonstrations outside the Swedish parliament last year. (Photo by Matt Dunham/AP Photo) 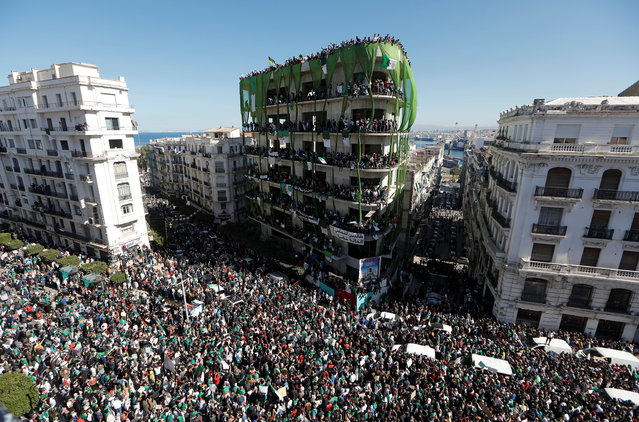 People gather during a protest over President Abdelaziz Bouteflika's decision to postpone elections and extend his fourth term in office, in Algiers, Algeria on March 15, 2019. (Photo by Zohra Bensemra/Reuters) 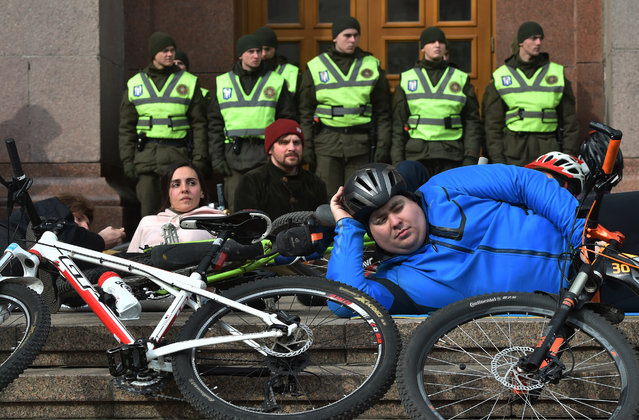 Bicyclists take part in the die-in action in front of the city hall of the Ukrainian capital Kiev on March 14, 2019 to ask modern infrastructure for safe cycling traffic. The protesters demand modern infrastructure for safe cycling traffic in the city and severely punish drivers who ignore cyclists on the road. (Photo by Sergei Supinsky/AFP Photo) 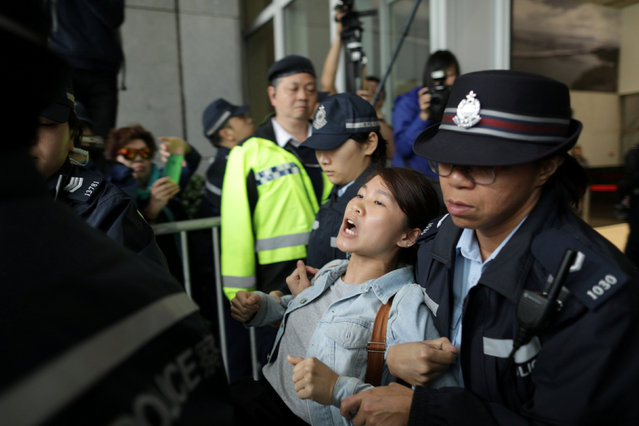 A protester is arrested by police after storming Hong Kong government headquarters over a proposal to extradite fugitives to mainland China, in Hong Kong, China on March 15, 2019. (Photo by Stanley Leung/Reuters) 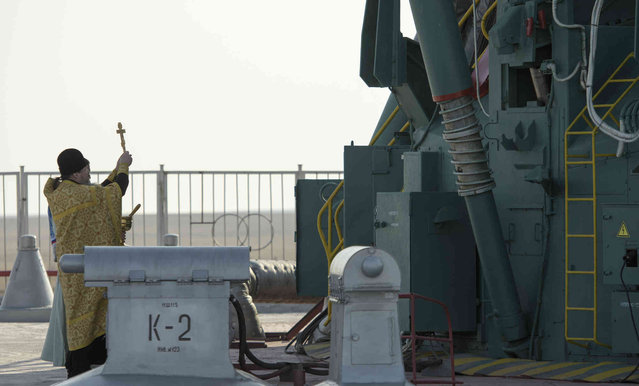 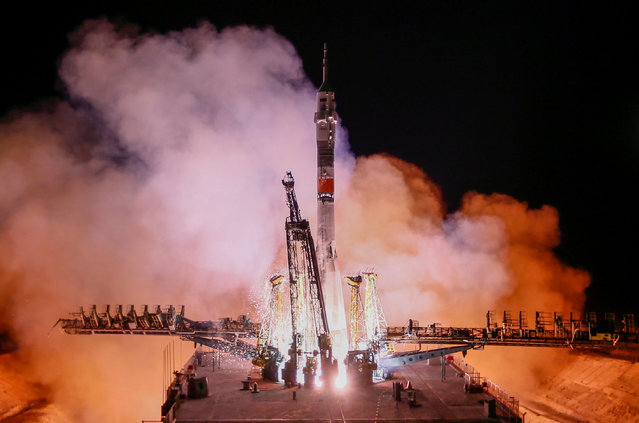 The Soyuz MS-12 spacecraft carrying the crew formed of Aleksey Ovchinin of Russia, Nick Hague and Christina Koch of the U.S. blasts off to the International Space Station (ISS) from the launchpad at the Baikonur Cosmodrome, Kazakhstan March 15, 2019. (Photo by Shamil Zhumatov/Reuters) 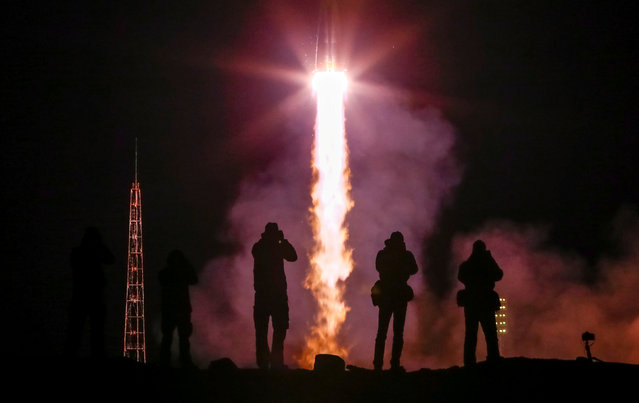 Photographers take pictures as the Soyuz MS-12 spacecraft carrying the crew formed of Aleksey Ovchinin of Russia, Nick Hague and Christina Koch of the U.S. blasts off to the International Space Station (ISS) from the launchpad at the Baikonur Cosmodrome, Kazakhstan March 15, 2019. (Photo by Shamil Zhumatov/Reuters) 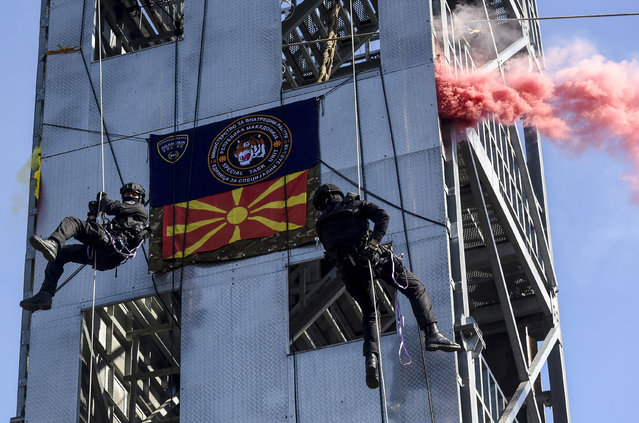 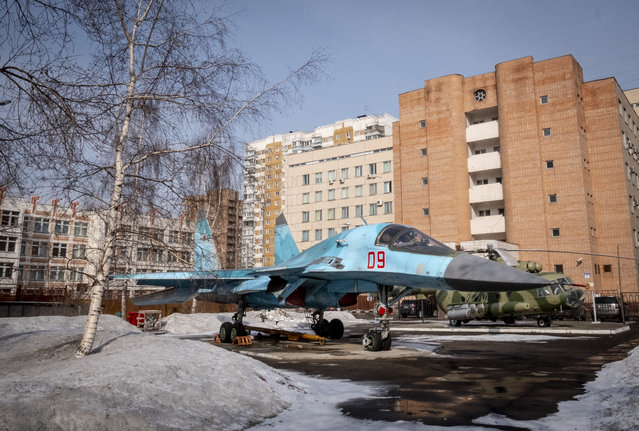 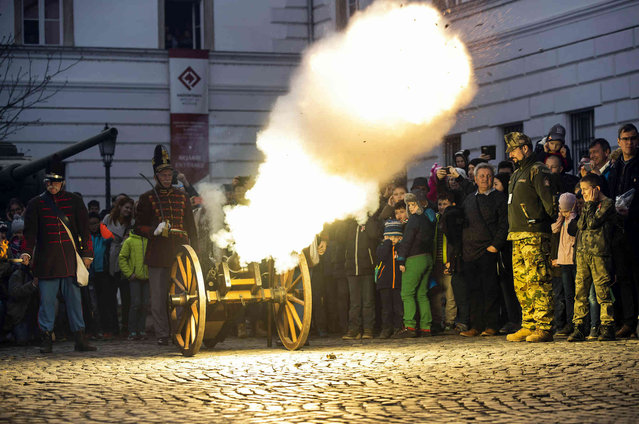 Traditionalists in a Hungarian period military uniform parade during the 171th anniversary of the outbreak of the 1848 revolution and war of independence against the Habsburg rule in Budapest, Hungary, Friday, March 15, 2019. (Photo by Balazs Mohai/MTI via AP Photo) 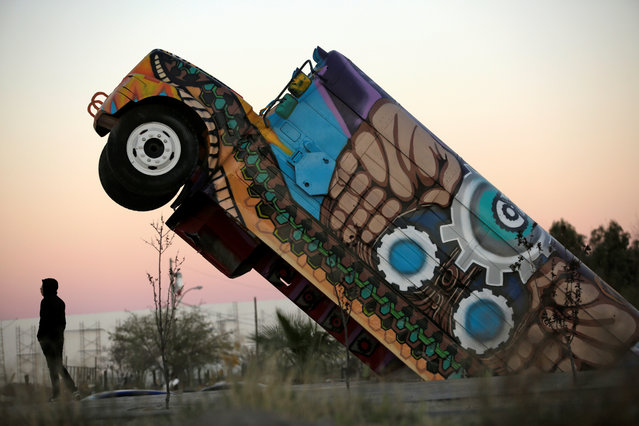 A man stands next to the 'Ser Fronterizo' monument, a retired U.S. school bus, which has been cut in half and erected to recognize the employees of assembly factories who use public transportation daily to get to work, in Ciudad Juarez, Mexico on March 14, 2019. (Photo by Jose Luis Gonzalez/Reuters) The Mausoleum of the Giants, an immersive solo show of monumental sculptures by the artist Phlegm, is installed at Taylor’s Eye Witness Works in Sheffield, England on March 14, 2019. (Photo by Danny Lawson/PA Wire Press Association) 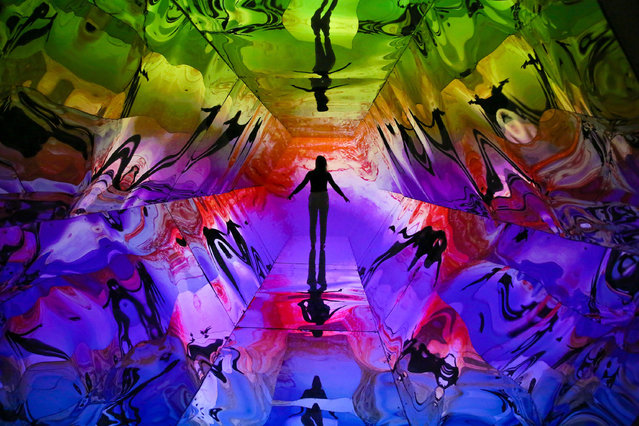 Laura Buckley's Fata Morgana, a dazzling and disorientating large-scale kaleidoscope is displayed at the Saatchi Gallery in London, England on March 14, 2019. Kaleidoscope at the Saatchi Gallery presents is an exhibition featuring the work of 9 international contemporary artists working across a variety of mediums which aims to be a timely exploration of our relationship with our surroundings, asking everyone to reconsider the way we engage with our environment. Kaleidoscope runs from 15 March, it will run until 5 May 2019. (Photo by Dinendra Haria/Rex Features/Shutterstock) 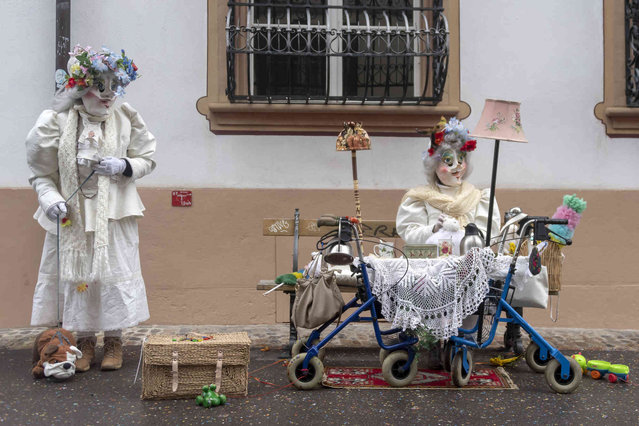 Revellers sit on a bench as they prepare to participate in the carnival in Basel, Switzerland, Wednesday, March 13, 2019. (Photo by Georgios Kefalas/Keystone via AP Photo) 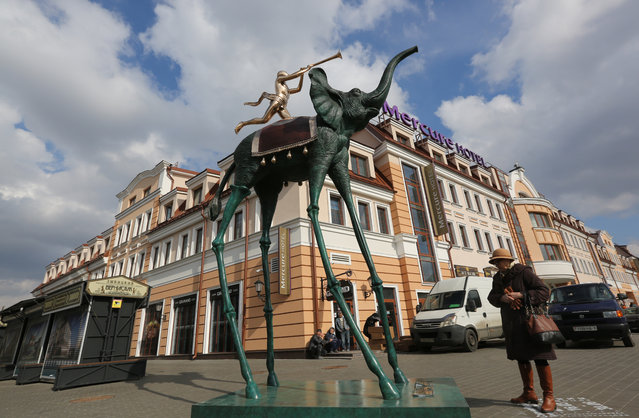 In this Monday March 11, 2019 photo, men wearing goat hides with bells around their waist and masks that include a meter tall, ribbon-covered formation topped with a foxtail, also known as bell wearers, pose for a photo at the village of Sohos, northern Greece as they participate in a Clean Monday festival. Greek carnivals at this time of year can be modest but they showcase ancient rites and traditions as well as providing reminders to some bloody moments in the country’s modern history. In northern Greece, two of the most celebrated carnival customs are found in the mountain town of Sochos, and in Naoussa. (Photo by Petros Giannakouris/AP Photo) 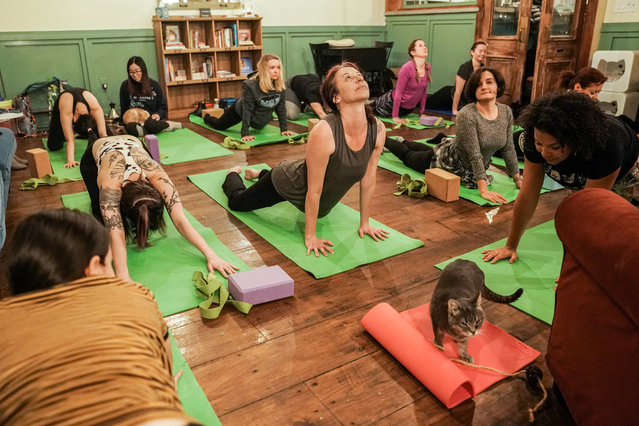 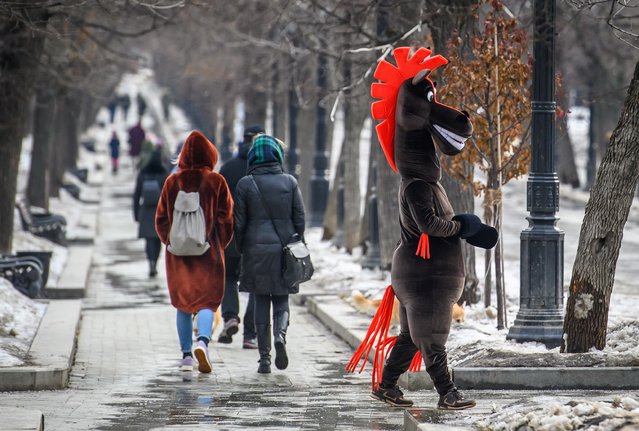 A man dressed as a horse entertains pedestrians on a boulevard in Central Moscow on March 15, 2019. (Photo by Mladen Antonov/AFP Photo) 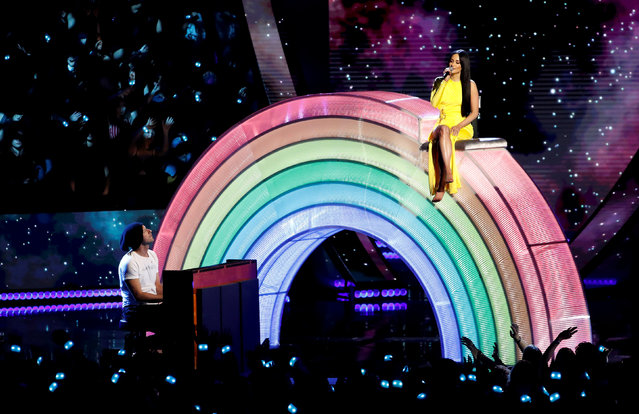 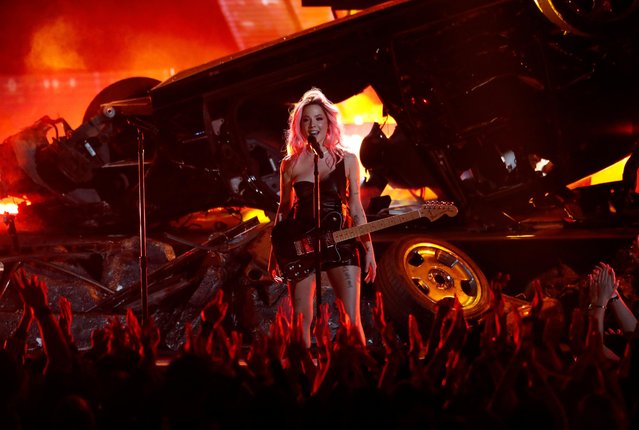 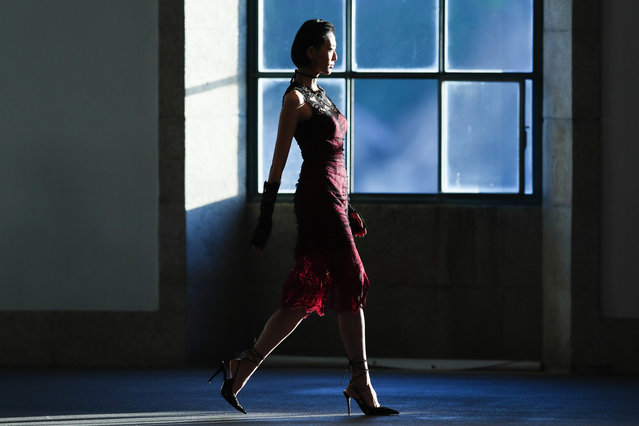 A model presents a creation by Portuguese designer Sophia Kah during the Portugal Fashion Show in Porto, Portugal, 15 March 2019. Fall-Winter 2019/20 collections are presented at the 44th Portugal Fashion until 17 March. (Photo by Jose Coelho/EPA/EFE) 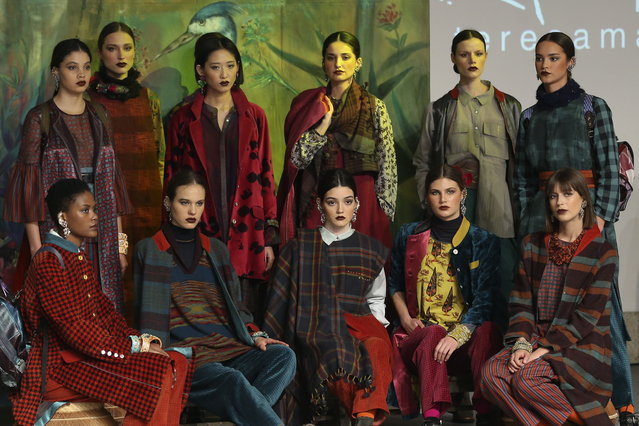