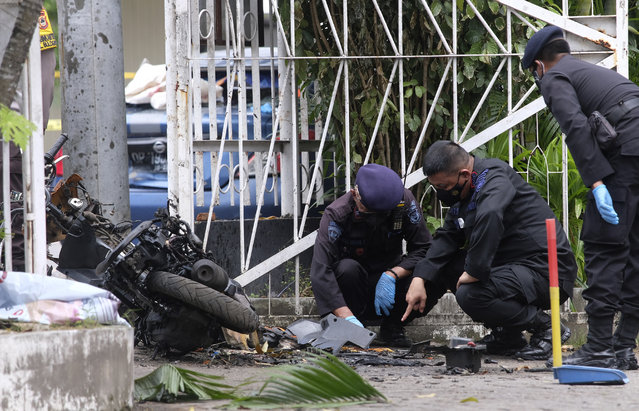 Members of a police bomb squad inspect the wreckage of a motorbike used to carry out Sunday's suicide bomb attack at the Sacred Heart of Jesus Cathedral in Makassar, South Sulawesi, Indonesia, Monday, March 29, 2021. Two attackers believed to be members of a militant network that pledged allegiance to the Islamic State group blew themselves up outside the packed Roman Catholic cathedral during a Palm Sunday Mass on Indonesia's Sulawesi island, wounding a number of people, police said. (Photo by Masyudi S. Firmansyah/AP Photo) 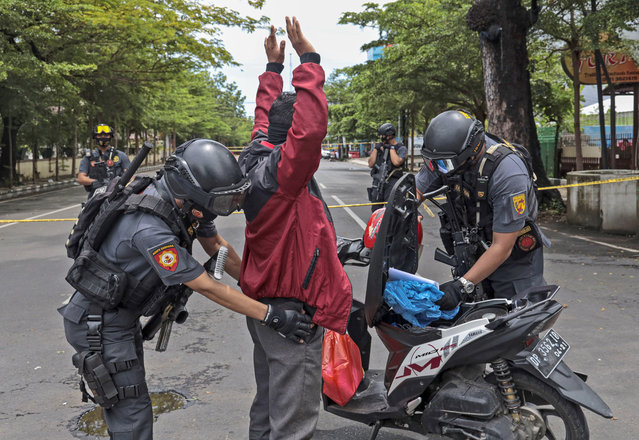 Police officers search a man at a security checkpoint near the site of Sunday's suicide bomb attack at the Sacred Heart of Jesus Cathedral in Makassar, South Sulawesi, Indonesia, Monday, March 29, 2021. (Photo by Yusuf Wahil/AP Photo) 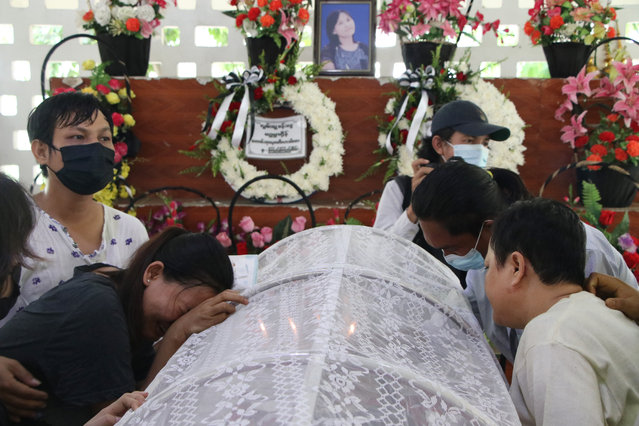 People mourn over the body of a woman who was killed during a clash with Myanmar's security forces, before her cremation in Yangon, Myanmar, Monday, March 29, 2021. Over 100 people across the country were killed by security forces on Saturday alone, including several children — a toll that has prompted a U.N. human rights expert to accuse the junta of committing “mass murder” and to criticize the international community for not doing enough to stop it. (Photo by AP Photo/Stringer) 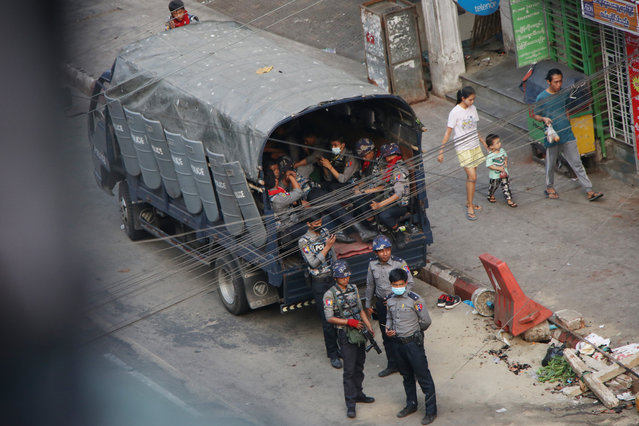 Security forces stand by on Hledan road in Kamayut township of Yangon in Myanmar, Monday, March 29, 2021. (Photo by AP Photo/Stringer) 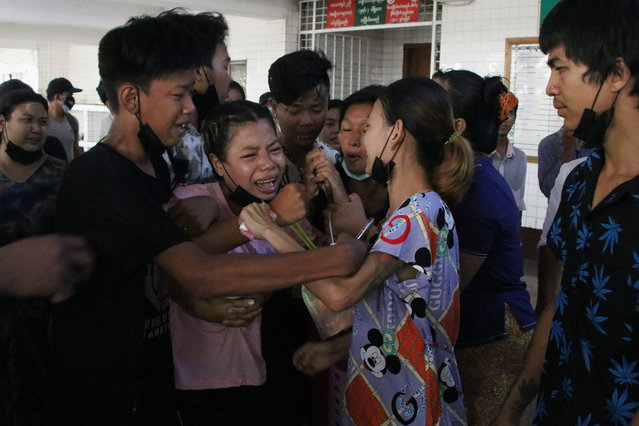 People mourn over the death of a man who was killed during a clash with Myanmar's security forces, during his cremation in Yangon, Myanmar, Monday, March 29, 2021. (Photo by AP Photo/Stringer) 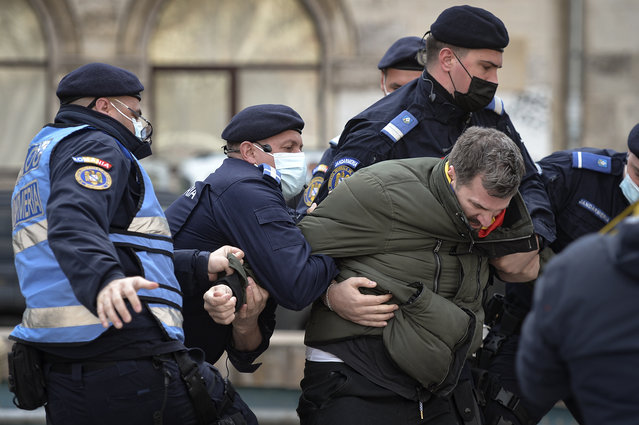 Four Romanian riot police officers struggle to detain a protester against COVID-19 restrictions before people gathered for a rally joined by thousands in Bucharest, Romania, Monday, March 29, 2021. Thousands of anti-restriction protesters took to the streets in several cities across Romania on Monday evening, a day after new restriction measures came into force. (Photo by Alexandru Dobre/AP Photo) 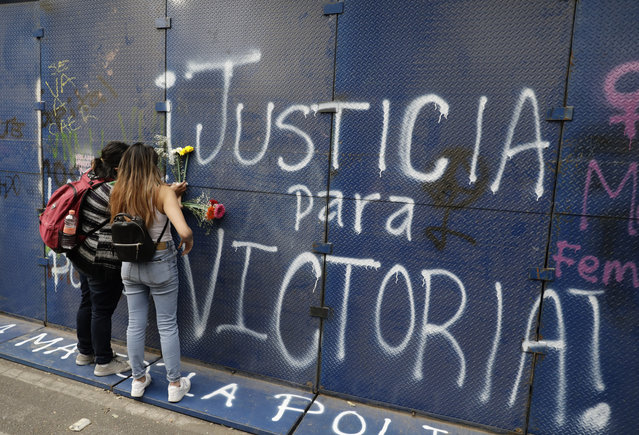 Young women place flowers on the perimeter wall of the Quintana Roo state offices sprayed with graffiti that reads in Spanish “Justice for Victoria”, during a protest in Mexico City, Monday, March. 29, 2021. The demonstrators were protesting the police killing in Tulum, Quintana Roo state, of Salvadoran national Victoria Esperanza Salazar when a female police officer knelt on her back to cuff her. Mexican authorities say an autopsy confirmed that police broke her neck. (Photo by Eduardo Verdugo/AP Photo) 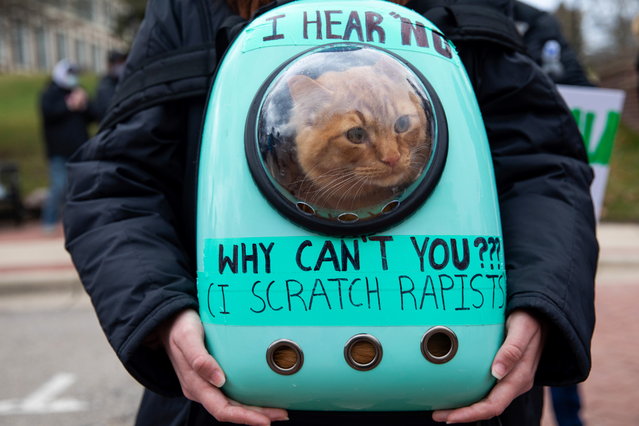 Goose, a nine-month-old cat, sits in a backpack as people gather during a Speak Out Against Sexual Violence demonstration at Eastern Michigan University in Ypsilanti, Michigan, U.S., March 28, 2021. (Photo by Emily Elconin/Reuters) 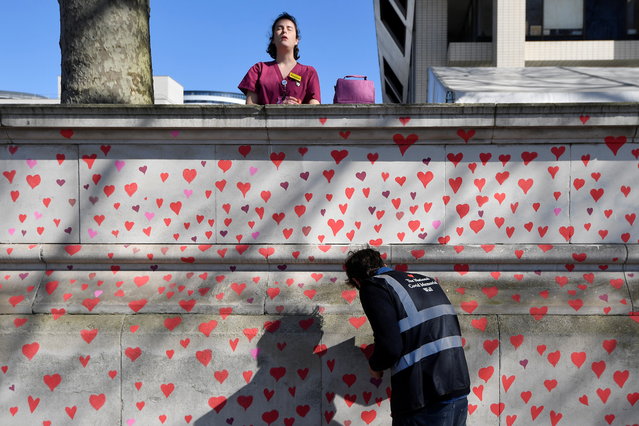 A health worker from St Thomas' hospital stands behind a wall being painted in hearts as a memorial to all those who have died so far in the UK from COVID-19, amid the spread of the coronavirus disease pandemic in London, Britain, March 29, 2021. (Photo by Toby Melville/Reuters) 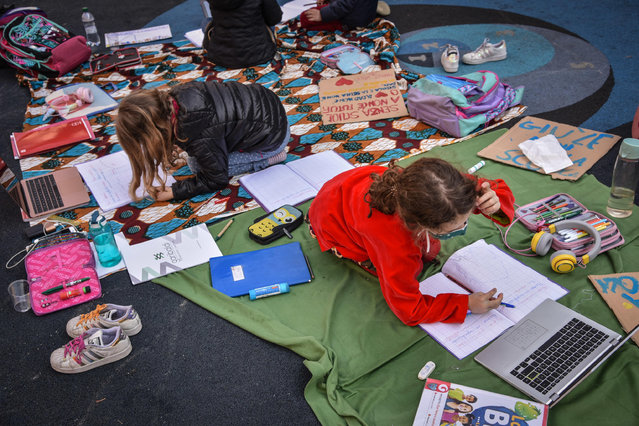 Students take part in outdoor lessons to protest against distance learning amid the COVID-19 pandemic in Milan, Italy, 29 March 2021. Italian Prime Minister Draghi said that schools are set to open after the Easter holidays. (Photo by Matteo Corner/EPA/EFE) 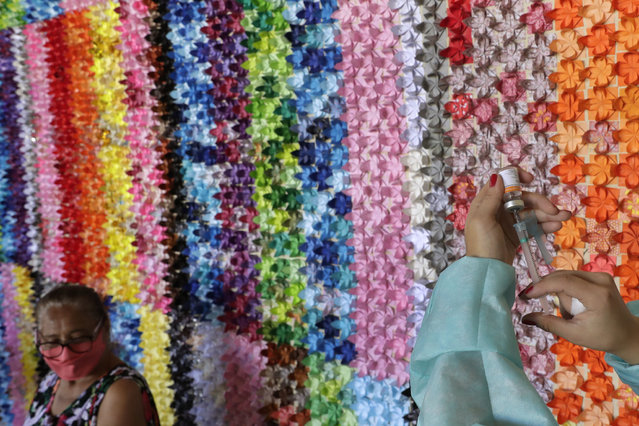 A health worker prepares a shot of the Sinovac vaccine for COVID-19 in front of a panel of origami lotus flowers, placed in honor of victims of the pandemic, at a health center in Brasilia, Brazil, Monday, March 29, 2021. According to the organizers, the flower panel is also a gesture of thanks to health professionals and of hope to those who are being vaccinated. (Photo by Eraldo Peres/AP Photo) 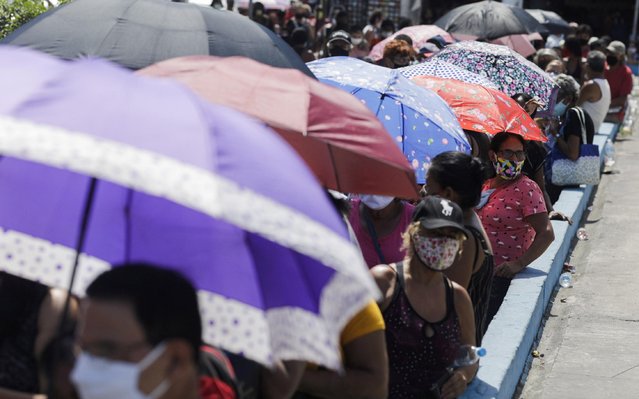 Elderly people wait in line to receive a dose of the Sinovac's CoronaVac coronavirus disease (COVID-19) vaccine, during a vaccination day for 65-year-old and older citizens in Duque de Caxias near Rio de Janeiro, Brazil on March 29, 2021. (Photo by Ricardo Moraes/Reuters) 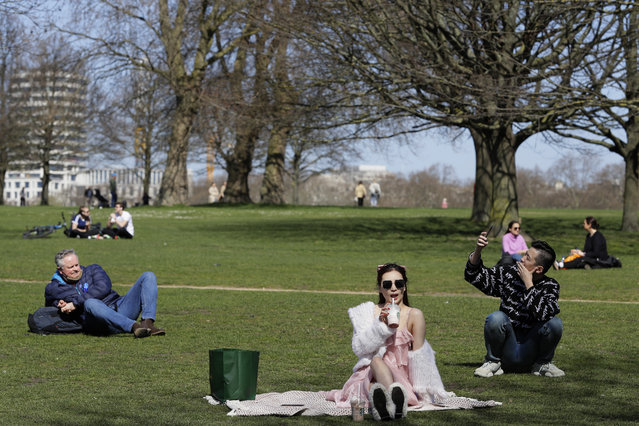 People picnic in Hyde Park, as lockdown easing begins in London, Monday, March 29, 2021. England is embarking on a major easing of its latest coronavirus lockdown that came into force at the start of the year, with families and friends able to meet up in outdoor spaces and many outdoor sports are permitted once again. (Photo by Kirsty Wigglesworth/AP Photo) 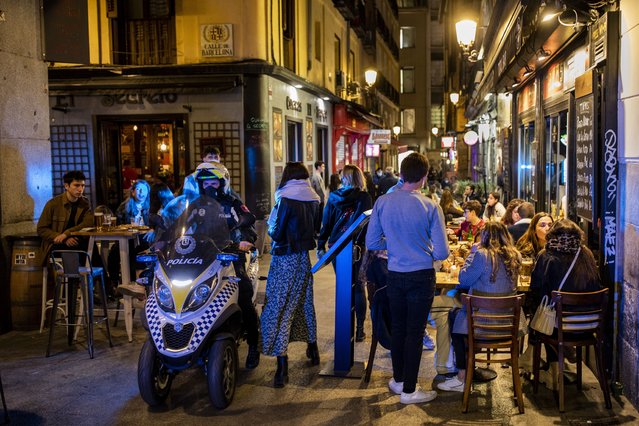 Policeman patrols in downtown Madrid, Spain, Friday, March 26, 2021. With its policy of open bars and restaurants — indoors and outdoors — and by keeping museums and theaters running even when outbreaks have strained hospitals, Madrid has built a reputation as an oasis of fun in Europe’s desert of restrictions. Other Spanish regions have a stricter approach to entertainment. Even sunny coastal resorts offer a limited range of options for the few visitors that started to arrive, coinciding with Easter week, amid a set of contradictory European travel rules. (Photo by Bernat Armangue/AP Photo) 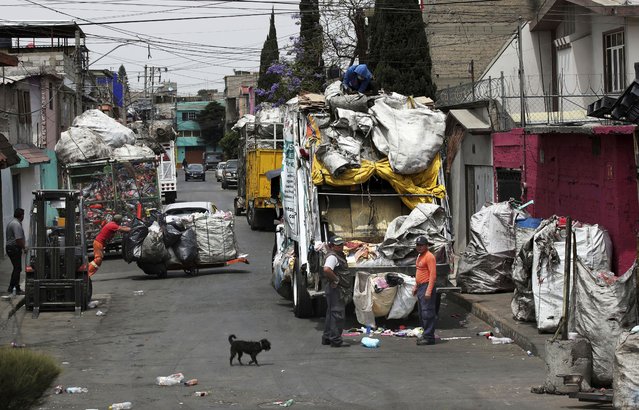 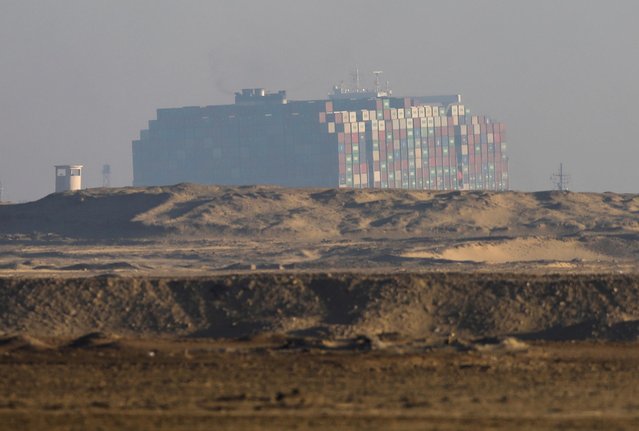 A view shows the partially re-floated container ship Ever Given, one of the world's largest container ships, in Suez Canal, Egypt on March 29, 2021. (Photo by Mohamed Abd El Ghany/Reuters) 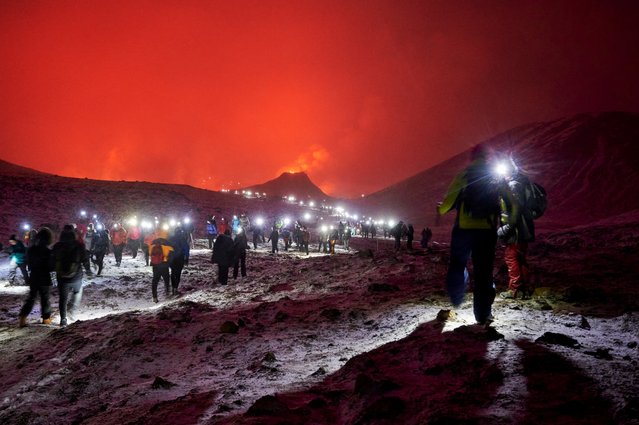 Sunday hikers walking along in the Geldingadalur valley are wearing head lights as they make their way to and from the site of an eruption of a volcano on the Reykjanes Peninsula in Iceland on March 28, 2021. A week on, big crowds of Sunday hikers flocked to the Fagradalsfjall area to see up close Iceland's latest volcano eruption, as the gentle lava flow allowed people to get close to he eruption some 40 km west of Iceland's capital Reykjavik. (Photo by Halldor Kolbeins/AFP Photo/Profimedia)
Edit Del
30 Mar 2021 10:09:00, post received 0 comments
Publication archive:
←   →
Popular tags:
All tags
Last searches: