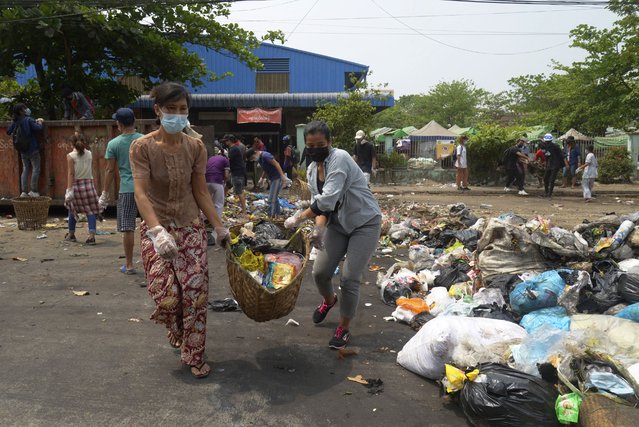 Anti-coup protesters use garbage to block a road as a form of “silent protest” in Yangon, Myanmar on Tuesday, March 30, 2021. At least 510 protesters have been killed since the coup, as of Tuesday, according to Myanmar's Assistance Association for Political Prisoners, which says the actual toll is likely much higher. (Photo by AP Photo/Stringer) 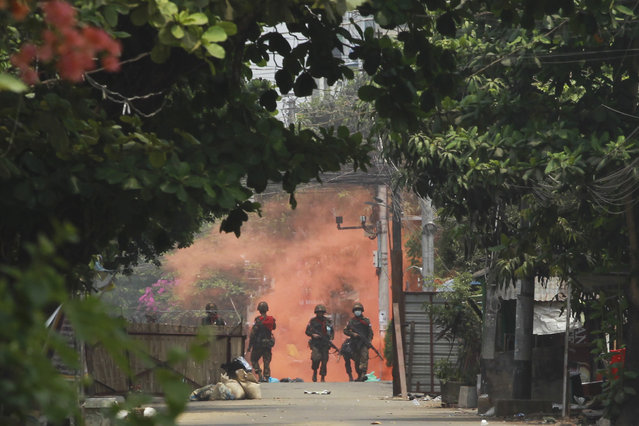 Soldiers walk towards anti-coup protesters during a demonstration in Yangon, Myanmar on Tuesday March 30, 2021. Thailand’s Prime Minister Prayuth Chan-ocha denied Tuesday that his country’s security forces have sent villagers back to Myanmar who fled from military airstrikes and said his government is ready to shelter anyone who is escaping fighting. (Photo by AP Photo/Stringer) 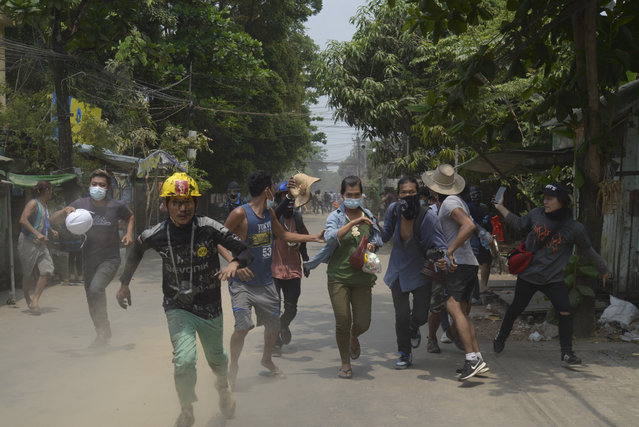 Anti-coup protesters run to avoid the military during a demonstration in Yangon, Myanmar on Tuesday March 30, 2021. (Photo by AP Photo/Stringer) 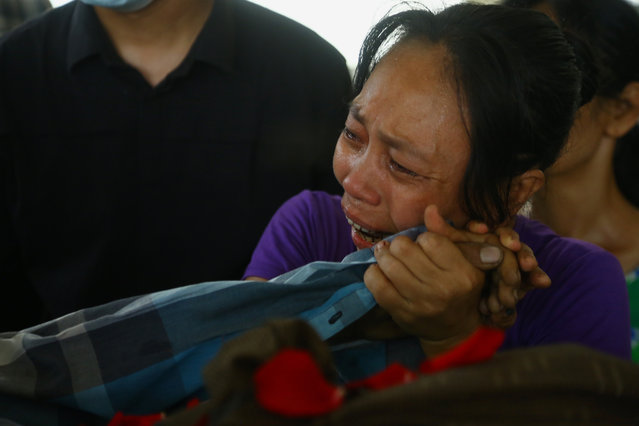 A family member mourns over the death of Aung Myo Thant as they gather at his funeral in Yangon, Myanmar, Tuesday, March 30, 2021. Family members said Aung Myo Thant was killed Monday during a clash with security forces at a protest against the military's coup that ousted the government of Aung San Suu Kyi on Feb. 1. (Photo by AP Photo/Stringer) 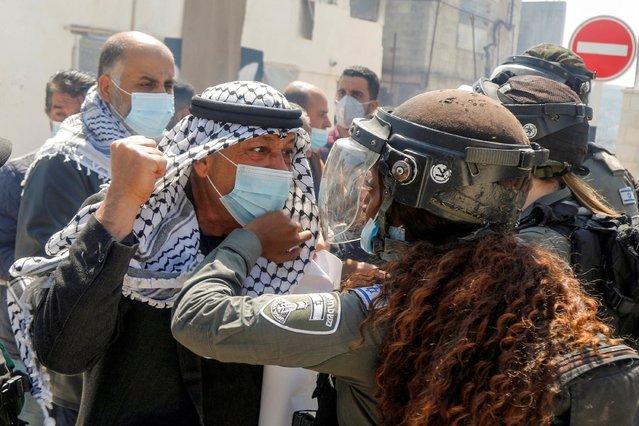 A Palestinian demonstrator scuffles with an Israeli border policewoman during a protest marking “Land Day”, in Sebastia near Nablus, in the Israeli-occupied West Bank on March 30, 2021. (Photo by Raneen Sawafta/Reuters) 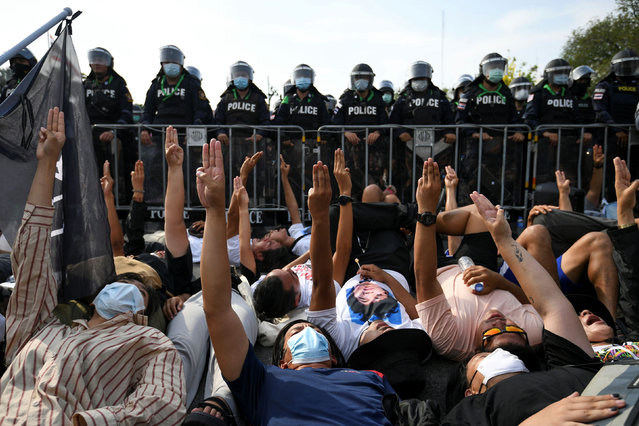 Protesters lie on the ground in front of riot police, showing three-finger salute, during a rally demanding release of arrested protest leaders and the abolition of Section 112 lese majeste law, outside the Government house in Bangkok, Thailand on March 30, 2021. (Photo by Chalinee Thirasupa/Reuters) 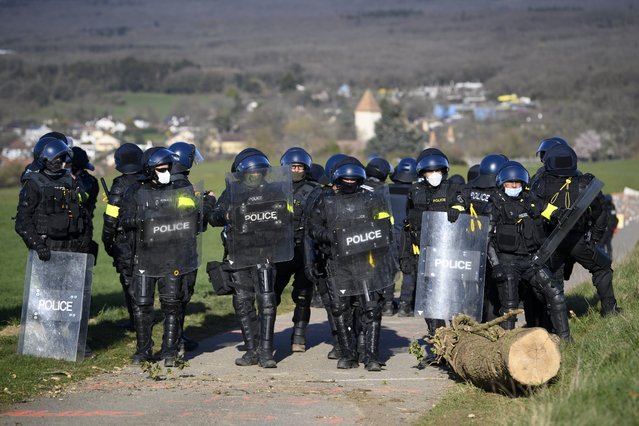 Swiss police officers start the operation of the eviction of environmental protesters from the ZAD de la Colline “Zone A Defendre” (zone to defend) installed by environmental activists in the the so-called “plateau de la Birette” to block the extension of the Mormont quarry operated by the cement company LafargeHolcim between Eclepens and La Sarraz, Switzerland, Tuesday, March 30, 2021. (Photo by Jean-Christophe Bott/Keystone) 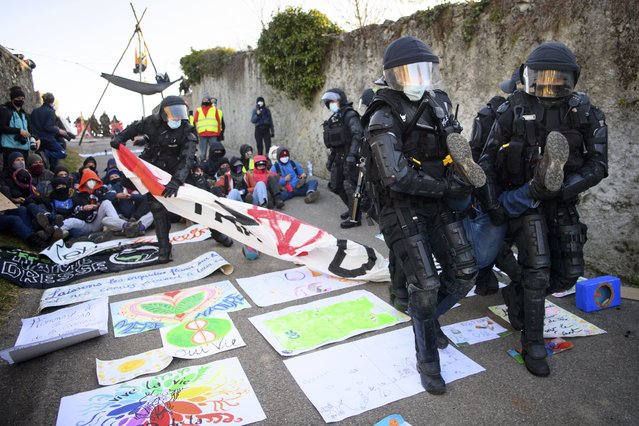 Swiss police officers arrest people during the operation to evict environmental protesters from the ZAD de la Colline, or “Zone A Defendre” (zone to be defended) installed by environmental activists in the the so-called “plateau de la Birette” to block the extension of the Mormont quarry operated by the cement company LafargeHolcim between Eclepens and La Sarraz, Switzerland, 30 March 2021. (Photo by Jean-Christophe Bott/EPA/EFE) 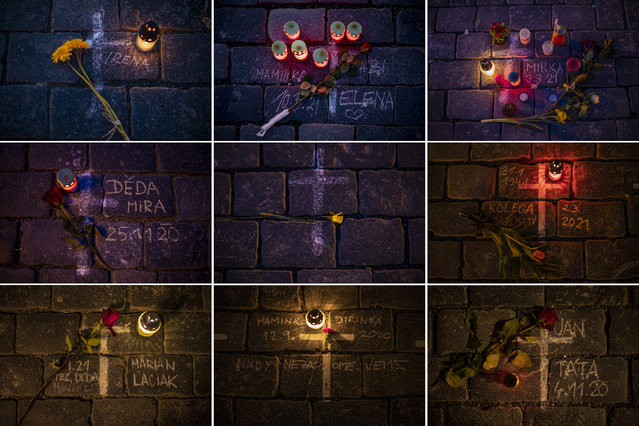 A combination picture shows candles and flowers placed on the pavement as thousands of crosses were painted on to commemorate the first anniversary of death of the first Czech COVID-19 patient, at Old Town Square in Prague, Czech Republic, 29 March 2021 (issued 30 March 2020). For a week, people place flowers and candles and write names of dead to pay respect to victims of the COVID-19 pandemic at an impulsive memorial place created on 22 March 2021. According to the Czech Ministry of Health, more than 26,000 people have died in the Czech Republic since the beginning of the epidemic of COVID-19 disease caused by the SARS-CoV-2. In contrast, the daily numbers of newly confirmed positive cases continue to decline. (Photo by Martin Divisek/EPA/EFE) 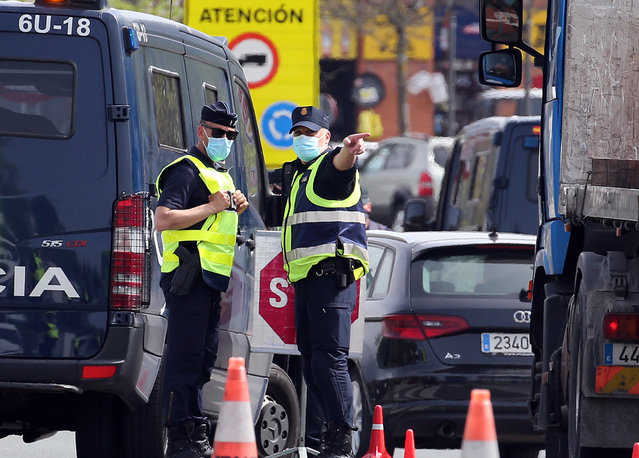 A French, left, and a Spanish police officer talk at the French-Spanish border in Behobie, southwestern France, Tuesday, March 30, 2021. Spain recently said it would extend a negative coronavirus test requirement in effect for arrivals by sea or air to include those entering from France by land. Revelers from Italy, the Netherlands, Germany and, most noticeably, France, join their Spanish contemporaries in Old Madrid's narrow streets to seek illicit fun at 11 p.m. after the bars close — and curfew kicks in. (Photo by Bob Edme/AP Photo) 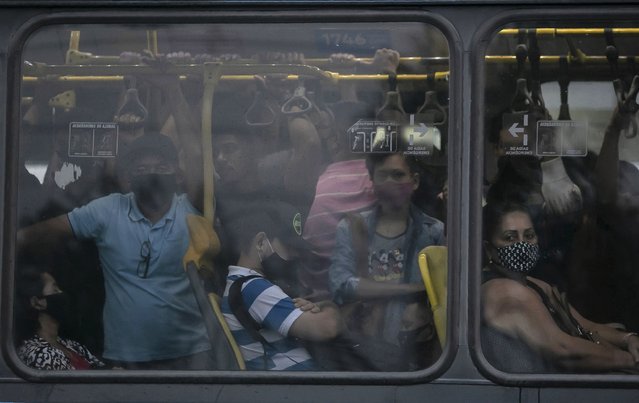 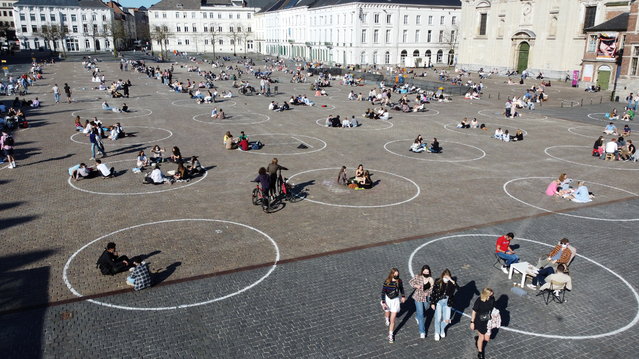 People relax inside circles painted by local authorities at Saint Peter's Square (Sint-Pietersplein) to encourage respect in social distancing amid the coronavirus (COVID-19) outbreak, in Ghent, Belgium on March 29, 2021. (Photo by Bart Biesemans/Reuters) 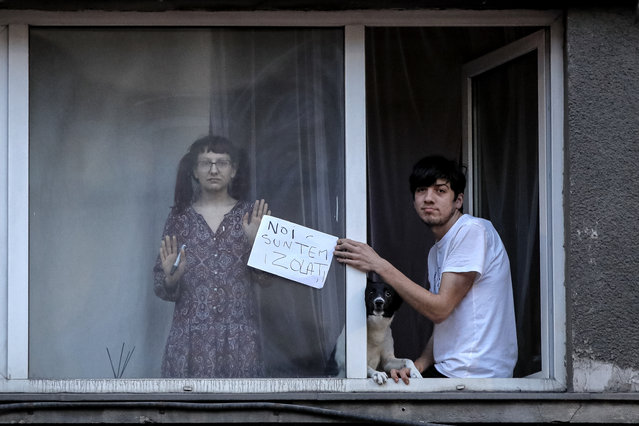 Youngsters hold a paper that reads: “We are in isolation”, while watching people who protest against the COVID-19 pandemic restrictions marching in downtown Bucharest, Romania, Monday, March 29, 2021. Thousands of anti-restriction protesters took to the streets in several cities across Romania on Monday evening, a day after new restriction measures came into force. (Photo by Vadim Ghirda/AP Photo) 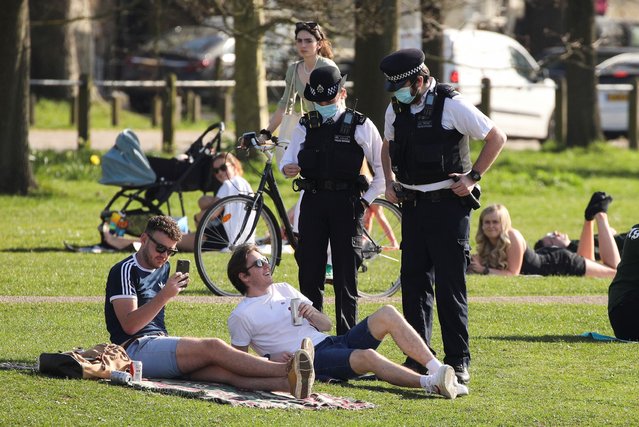 Police officers speak to a man as people enjoy the weather at Clapham Common, in London, Britain on March 30, 2021. (Photo by Tom Nicholson/Reuters) 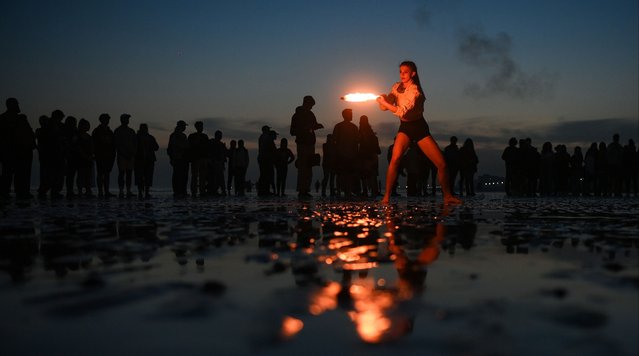 A fire juggler draws a crowd on Brighton beach on March 30, 2021 in Brighton, United Kingdom. (Photo by Mike Hewitt/Getty Images) 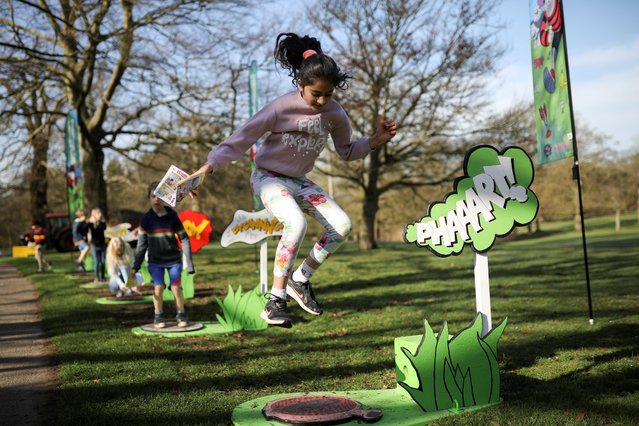 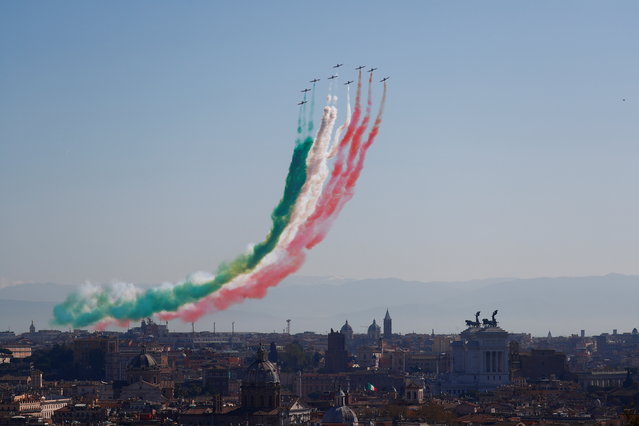 Italy's acrobatic Air Force squadron blaze the colours of the Italian flag over the capital as they celebrate the 98th anniversary of the establishment of the Air Force, in Rome, Italy on March 30, 2021. (Photo by Guglielmo Mangiapane/Reuters) 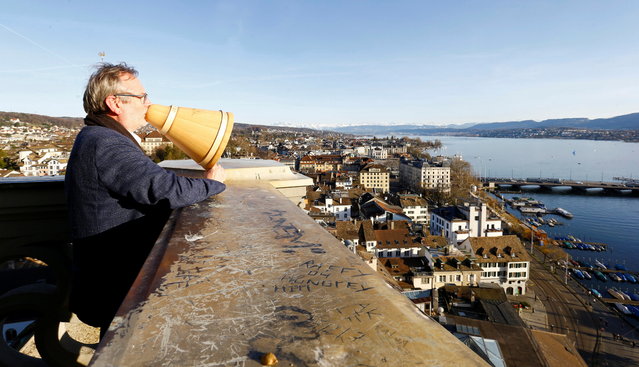 Protestant pastor Christoph Sigrist blesses the city of Zurich from the Karlsturm tower of the Grossmuenster church, as the spread of the coronavirus disease (COVID-19) continues, in Zurich, Switzerland on March 29, 2021. (Photo by Arnd Wiegmann/Reuters) 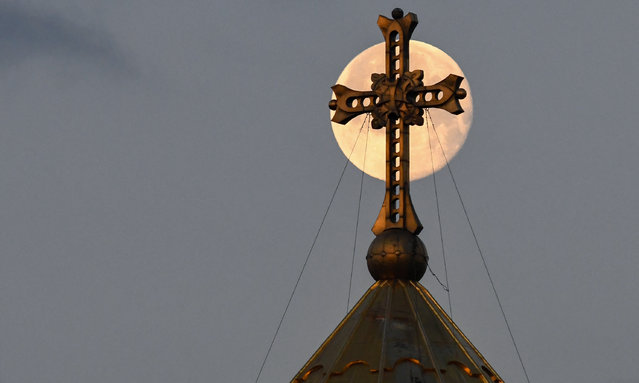 The full moon is seen behind a cross on top of the Holy Trinity Cathedral in Tbilisi, Georgia on March 30, 2021. (Photo by Vano Shlamov/AFP Photo) 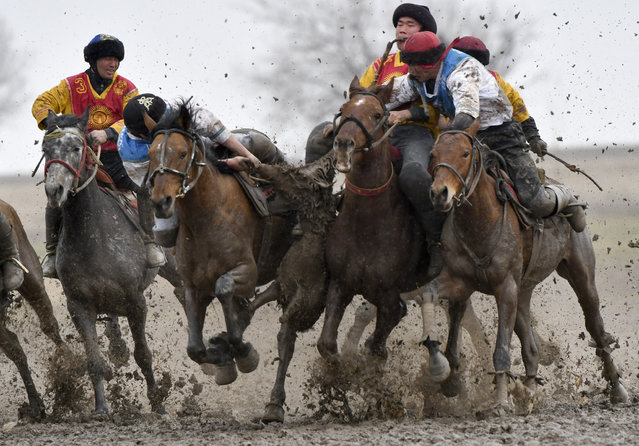