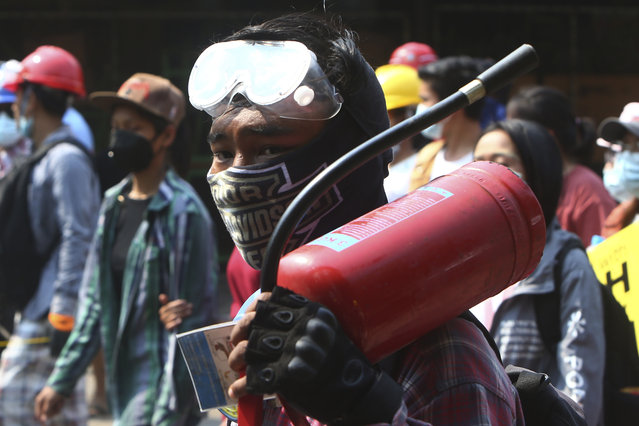 A protester carries a fire extinguish during an anti-coup demonstration in Mandalay, Myanmar, Saturday, March 6, 2021. The U.N. special envoy for Myanmar on Friday called for urgent Security Council action, saying about 50 peaceful protesters were killed and scores were injured in the military's worst crackdowns this week. (Photo by Reuters/Stringer) 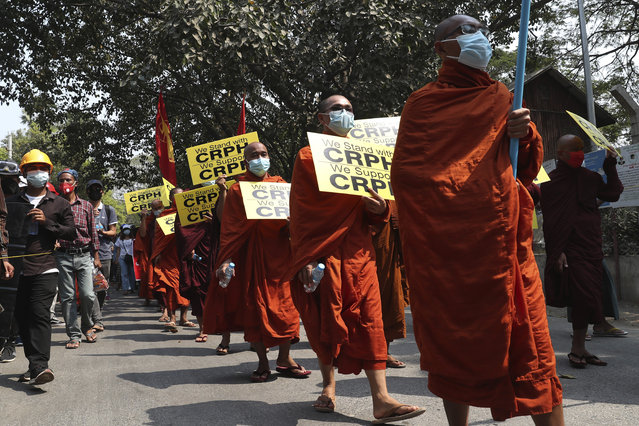 Monks hold signs as they march during an anti-coup protest in Mandalay, Myanmar, Saturday, March 6, 2021. (Photo by Reuters/Stringer) 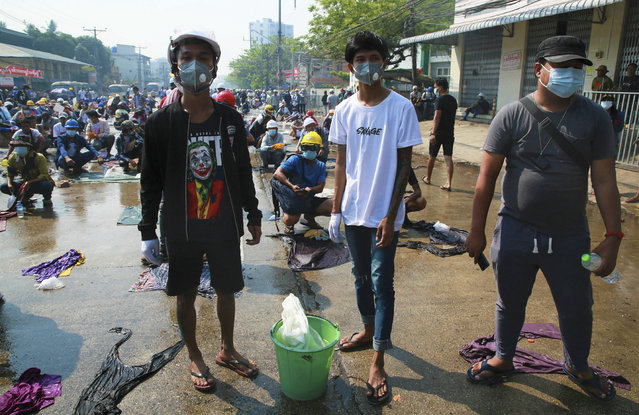 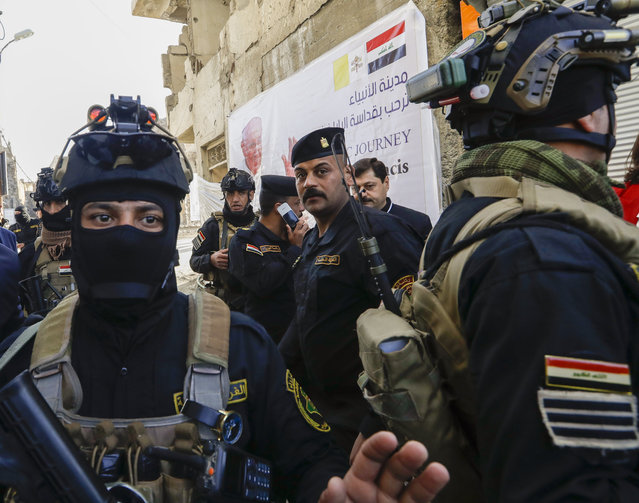 Iraqi security forces deploy in Mosul, northern Iraq, once the de-facto capital of IS, where Pope Francis will pray for the victims of war at Hosh al-Bieaa Church Square, Sunday, March 7, 2021. The long 2014-2017 war to drive IS out left ransacked homes and charred or pulverized buildings around the north of Iraq, all sites Francis will visit on Sunday. (Photo by Andrew Medichini/AP Photo) 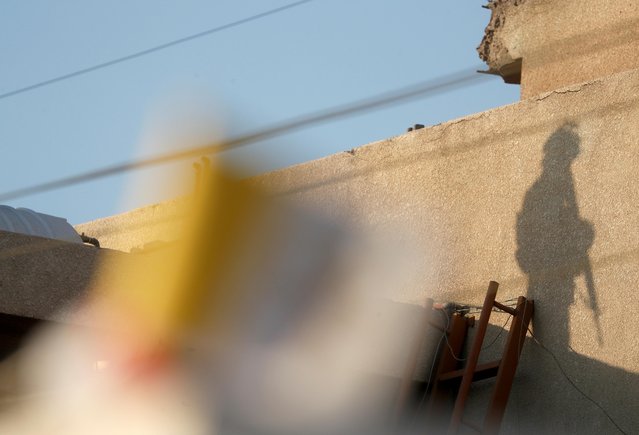 A shadow of a member of Iraqi security forces is seen on a wall before Pope Francis arrival to hold a Mass at Chaldean Cathedral of Saint Joseph in Baghdad, Iraq, March 6, 2021. (Photo by Yara Nardi/Reuters) 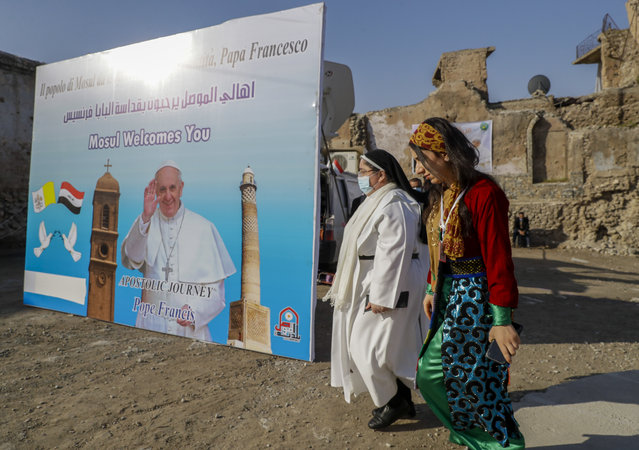 Surrounded by destroyed buildings people arrive to join Pope Francis who will pray for the victims of war at Hosh al-Bieaa Church Square, in Mosul, Iraq, once the de-facto capital of IS, Sunday, March 7, 2021. (Photo by Andrew Medichini/AP Photo) 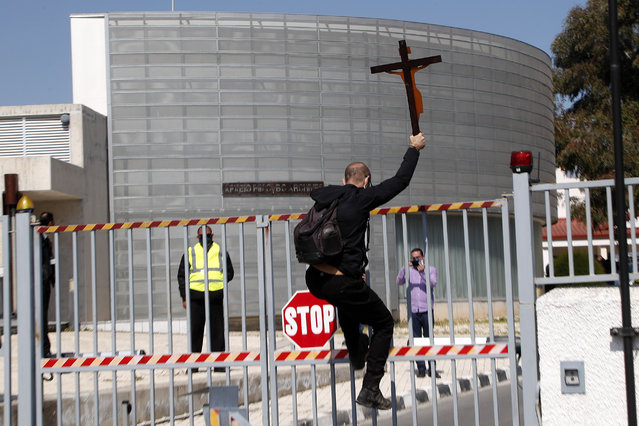 A protestor holding a cross climbs a gate outside Cyprus' national broadcasting building, during a protest, in capital Nicosia, Cyprus, Saturday, March 6, 2021. The Orthodox Church of Cyprus is calling for the withdrawal of the country’s controversial entry into this year’s Eurovision song context titled “El Diablo”, charging that the song makes an international mockery of country’s moral foundations by advocating “our surrender to the devil and promoting his worship”. (Photo by Petros Karadjias/AP Photo) 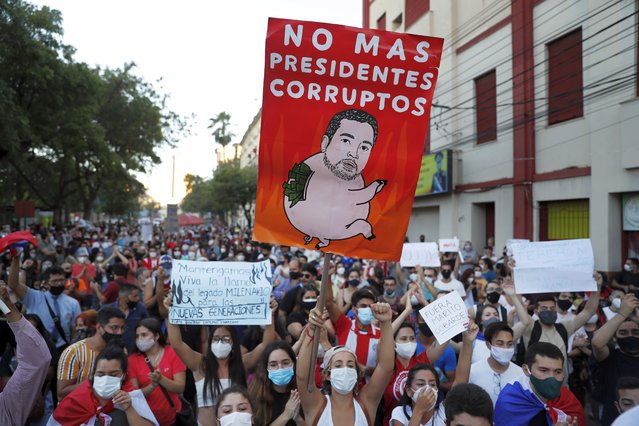 Youth protests against the government of President Mario Abdo Benitez in response to the shortage of medications for COVID-19 patients in hospitals and the low availability of the vaccine against the new coronavirus, in Asuncion, Paraguay, Saturday, March 6, 2021. Abdo Benitez made changes in three members of his Government staff, amid the resignation of the country's health minister. (Photo by Jorge Saenz/AP Photo) 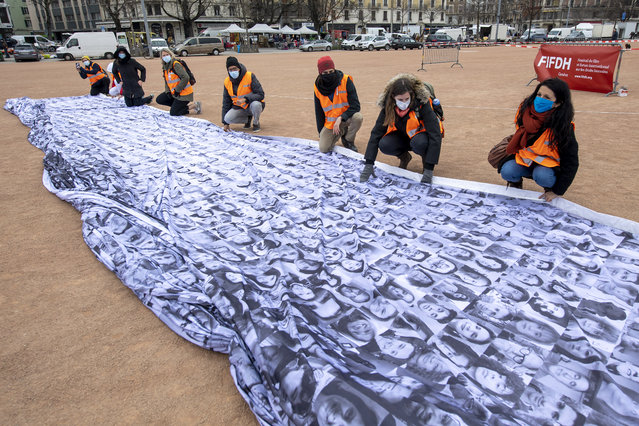 Volunteers prepare the installation of the giant flag “We are watching: The Eyes of the world” in Geneva, Switzerland, 06 March 2021. The flag was designed by artist Dan Acher and presented for first time during the COP25 UN Climate Change Conference in Madrid in 2019. It is depicting a monumental eye made up of thousands of portraits contributed from 190 countries, in the size of 10 storey building and was hoisted by a crane over the Plainpalais plain on 06 March. The flag is flying for the first time in Geneva in partnership with the FIFDH, International Film Festival and Forum on Human Rights, whose 2021 edition focuses on new forms of resistance. (Photo by Martial Trezzini/EPA/EFE) 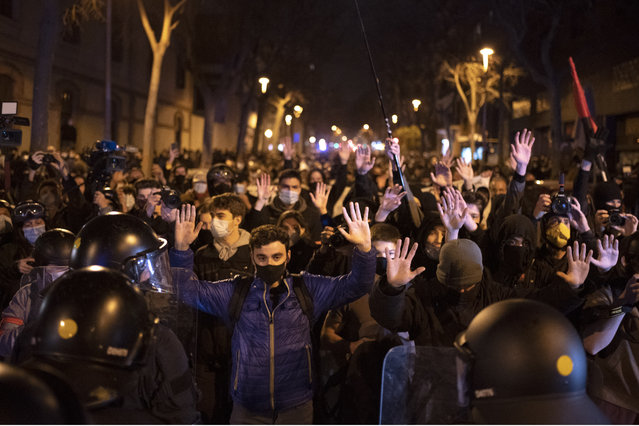 Demonstrators react as police cordon off the street during a march in Barcelona, Spain, Saturday, March 6, 2021. Several hundred protesters are marching in northeastern Spain's Barcelona against the crackdown that has followed the recent violent outcry over the imprisonment of Pablo Hasél, an outspoken anti-establishment artist and activist. (Photo by Emilio Morenatti/AP Photo) 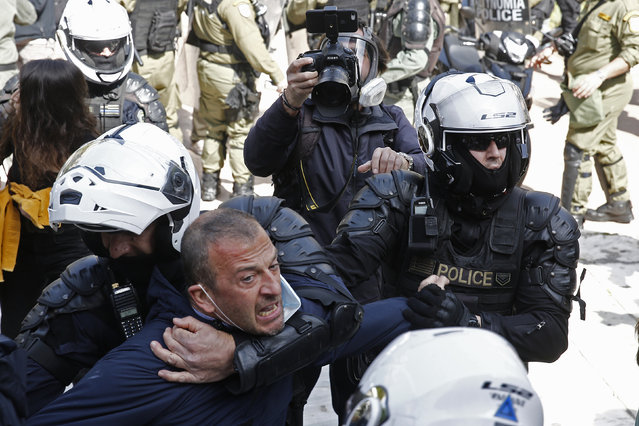 Riot police officers scuffle with demonstrators trying to protest in solidarity with Dimitris Koufontinas, a convicted member of the guerilla group “17 November”, in Athens, Greece, 06 March 2021. Dimitris Koufontinas has been on a hunger strike for 58 days demanding to be transfered to Athens' Korydallos security prison from a prison in northern Greece in order to be close to his family. (Photo by Alexandros Vlachos/EPA/EFE) 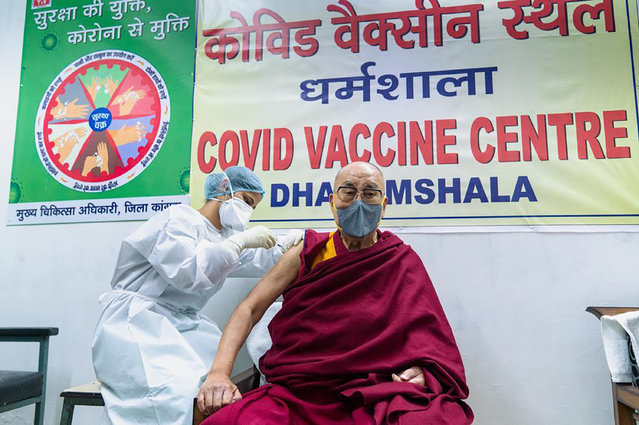 This image provided by Harpo Productions shows Prince Harry, left, and Meghan, Duchess of Sussex, in conversation with Oprah Winfrey. “Oprah with Meghan and Harry: A CBS Primetime Special” airs March 7, 2021. Britain’s royal family and television have a complicated relationship. The medium has helped define the modern monarchy: The 1953 coronation of Queen Elizabeth II was Britain’s first mass TV spectacle. Since then, rare interviews have given a glimpse behind palace curtains at the all-too-human family within. (Photo by Joe Pugliese/Harpo Productions via AP Photo/File) 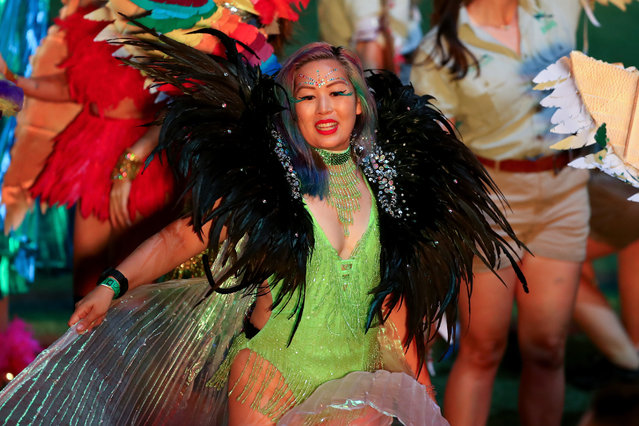 Parade goers take part during the 43rd Sydney Gay and Lesbian Mardi Gras Parade at the SCG on March 06, 2021 in Sydney, Australia. The Sydney Gay and Lesbian Mardi Gras parade usually happens along Oxford Street but is being held at the Sydney Cricket Ground this year due to COVID-19 restrictions and contact tracing requirements. The Sydney Mardi Gras parade began in 1978 as a march and commemoration of the 1969 Stonewall Riots of New York. It is an annual event promoting awareness of gay, lesbian, bisexual and transgender issues and themes. The 2021 Mardi Gras festival theme is “RISE” and is about letting spirits soar after the challenge and hardship that 2020 presented. (Photo by Brendon Thorne/Getty Images) 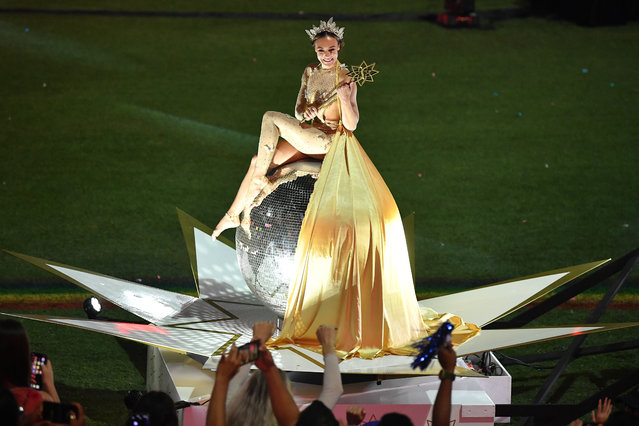 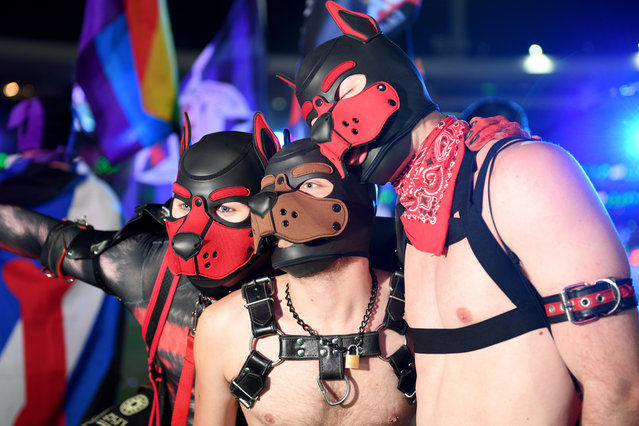 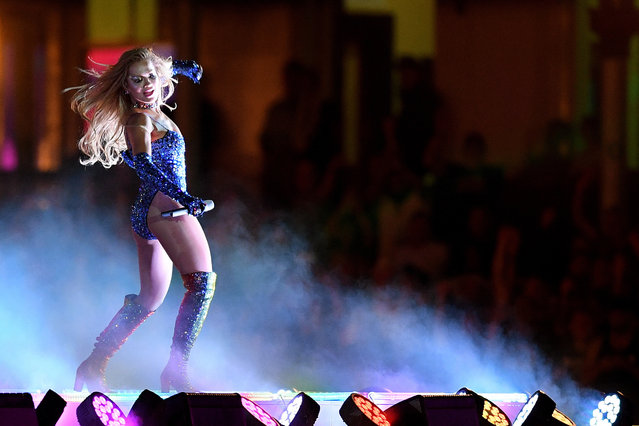 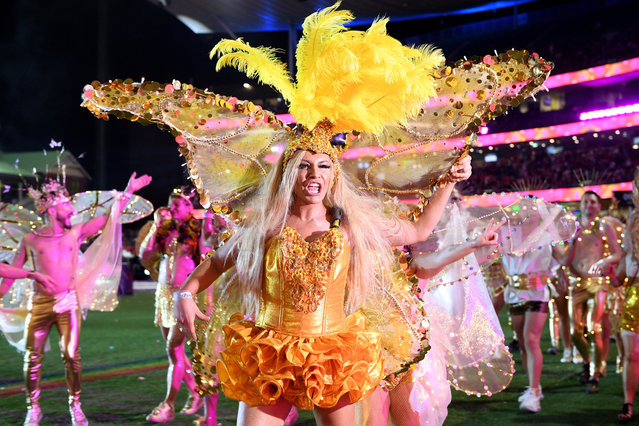