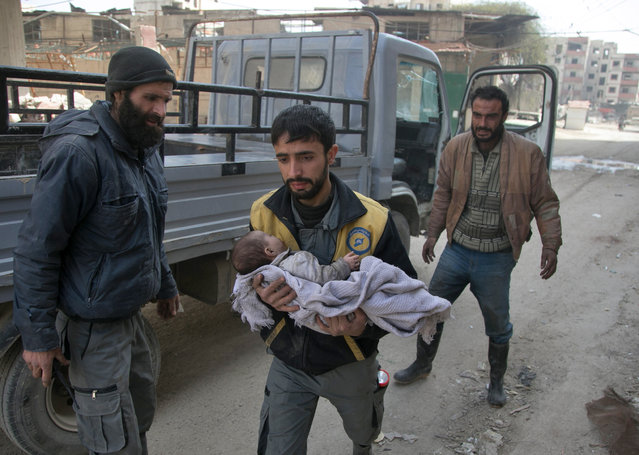 Syrian's flee their homes in the town of Beit Sawa in Syria's besieged eastern Ghouta region on March 4, 2018, following reported air strikes. Syria's regime seized control of over a quarter of rebel-held Eastern Ghouta on the edge of Damascus after two weeks of devastating bombardment, sending hundreds of civilians into flight, the Syrian Observatory for Human Rights said. (Photo by Abdulmonam Eassa/AFP Photo) 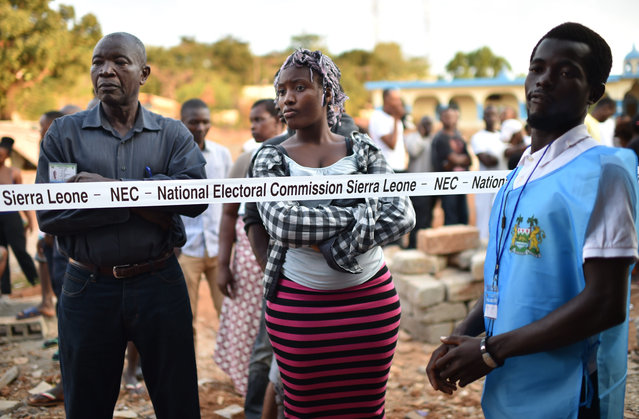 People wait in line prior to vote as part of the general elections, on March 7, 2018 at a polling station in Freetown, Sierra Leone. More than 3.1 million voters are registered for the polls across the small West African nation. (Photo by Issouf Sanogo/AFP Photo) 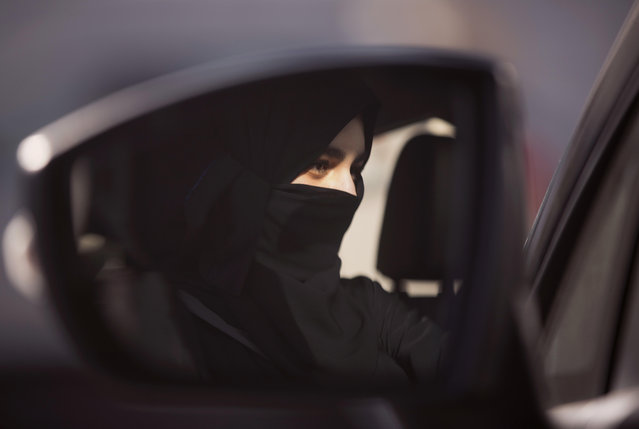 A student at the female-only campus of Effat University, sits for the first time in the driver's seat, during training sponsored by Ford Motor, in Jiddah, Saudi Arabia, Tuesday, March 6, 2018. A stunning royal decree issued last year by King Salman announcing that women would be allowed to drive in 2018 upended one of the most visible forms of discrimination against women in Saudi Arabia. (Photo by Amr Nabil/AP Photo) 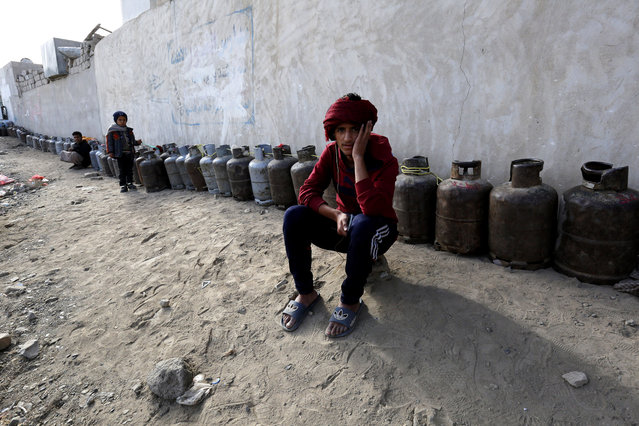 Yemenis wait next to empty cooking gas cylinders for gas supplies at a gas station amid increasing gas shortages in Sana'a, Yemen, 05 March 2018. According to reports, Yemen continues to experience severe cooking gas shortages since the Saudi-led coalition started a military campaign against the Houthi rebels and their allies in the impoverished Arab state three years. (Photo by Yahya Arhab/EPA/EFE) 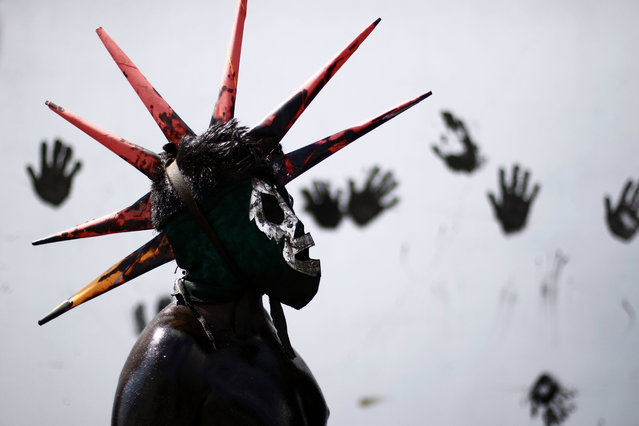 Youth covered in body paint participate in a carnival and perform the Xinacetes, a pre-hispanic dance, in the town of San Nicolas de los Ranchos, in Puebla, Mexico, 06 March 2018. The pre-hispanic dance Xinacetes is performed for three days to expel the “demons” from the town. (Photo by Hugo Ortuno/EPA/EFE) 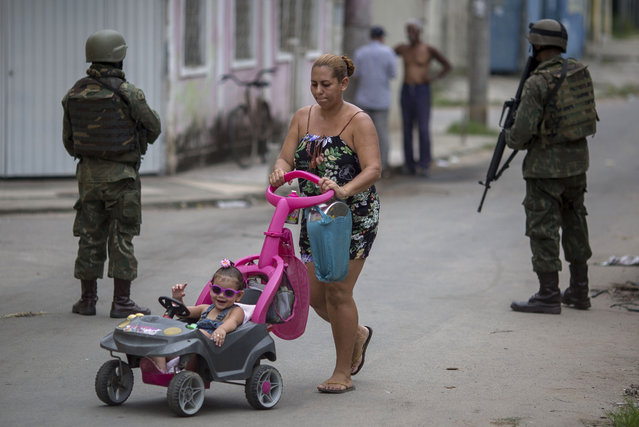 Soldiers of the Armed Forces, backed by armoured vehicles, aircraft and heavy engineering equipment, take part in an operation in the violence-plagued favela of Vila Kennedy, in Rio de Janeiro, Brazil, on March 7, 2018. The Brazilian army launched a new operation on a favela in Rio de Janeiro, the third since President Michel Temer ordered the military to take over the command of security in the whole of Rio state to fight organized crime. (Photo by Mauro Pimentel/AFP Photo) 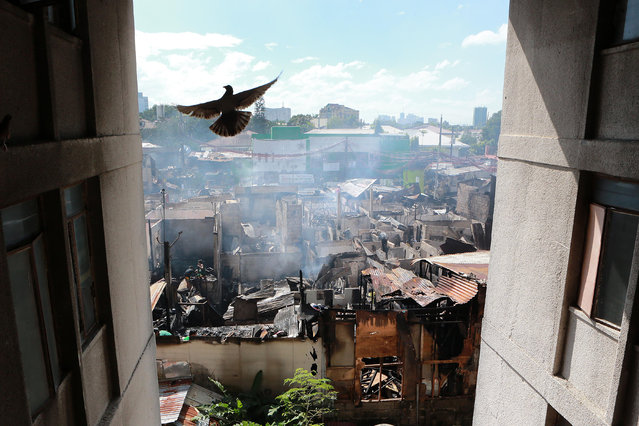 A dove flies over fire-damaged homes in a slum in Quezon City, Philippines on March 7, 2018. More than 150 shanties were razed in the blaze, leaving 500 families homeless. (Photo by Xinhua/Barcroft Images) 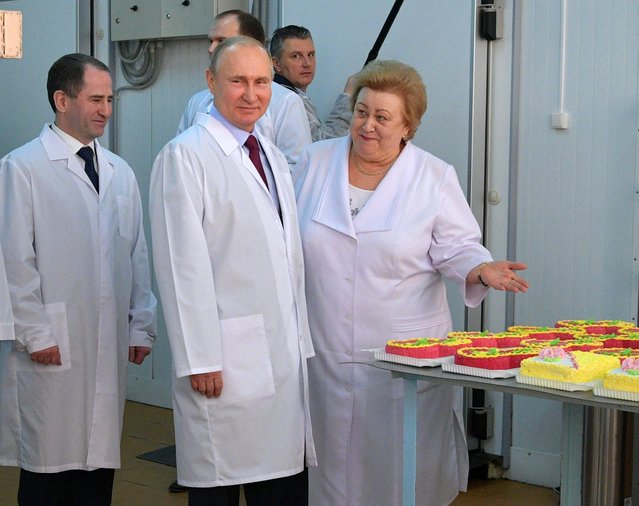 Russian President Vladimir Putin, center, looks at bread and confectionery during his visit to the Samara bakery and confectionery factory on the eve of International Women's Day in Samara, Russia, Wednesday, March 7, 2018. (Photo by Alexei Druzhinin, Sputnik, Kremlin Pool Photo via AP Photo) 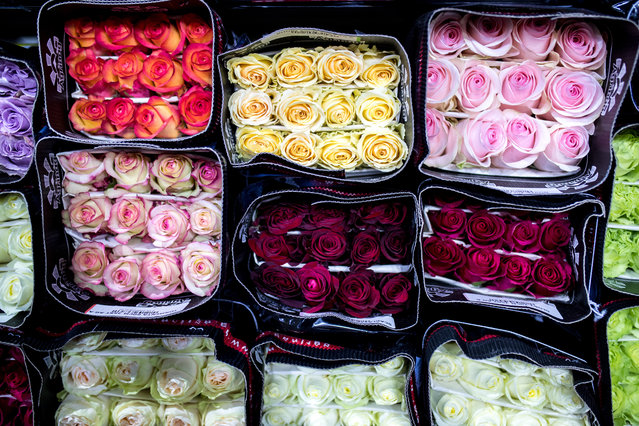 Roses for sale at Rizhsky Flower Market ahead of International Women' s Day in Moscow, Russia on March 7, 2018. (Photo by Sergei Bobylev/TASS) 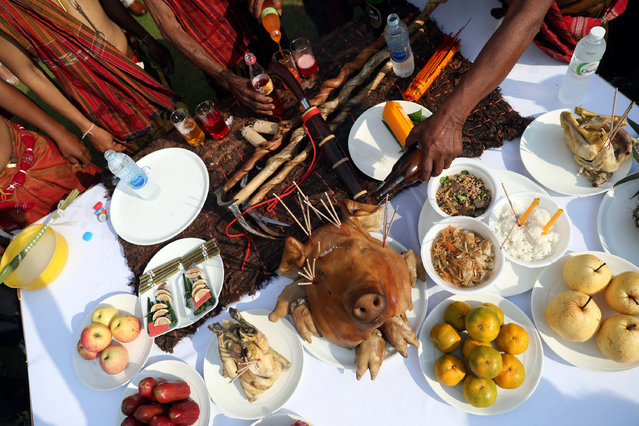 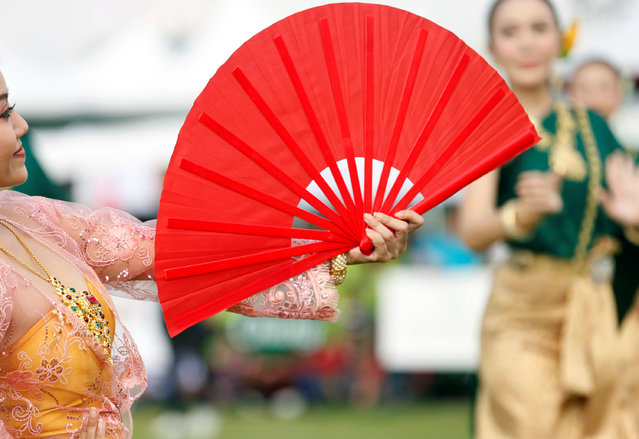 Performers are seen before a match at the annual King's Cup Elephant Polo Tournament at a riverside resort in Bangkok, Thailand March 8, 2018. (Photo by Soe Zeya Tun/Reuters) 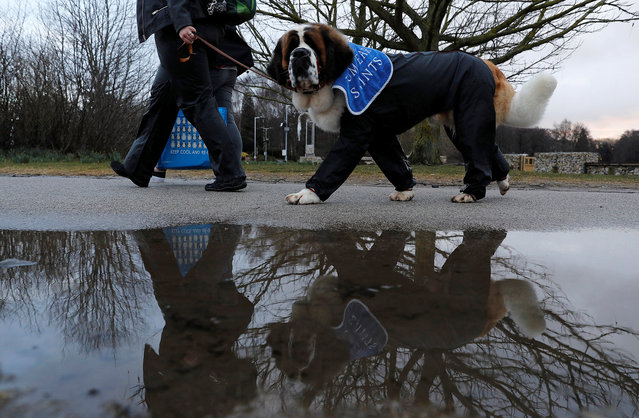 A woman with a Saint Bernard dog arrives for the first day of the Crufts Dog Show in Birmingham, Britain, March 8, 2018. (Photo by Darren Staples/Reuters) 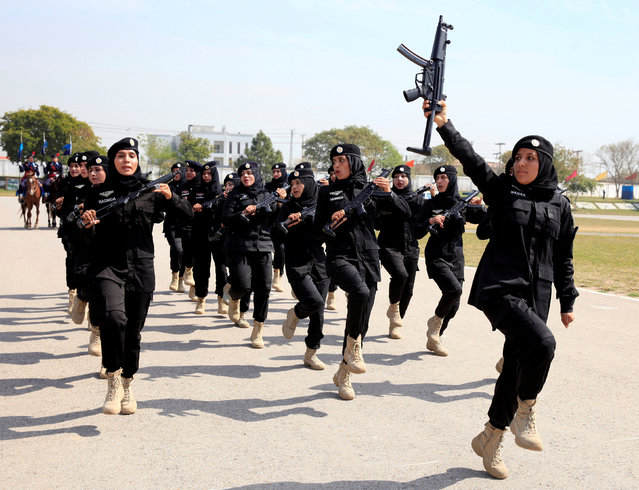 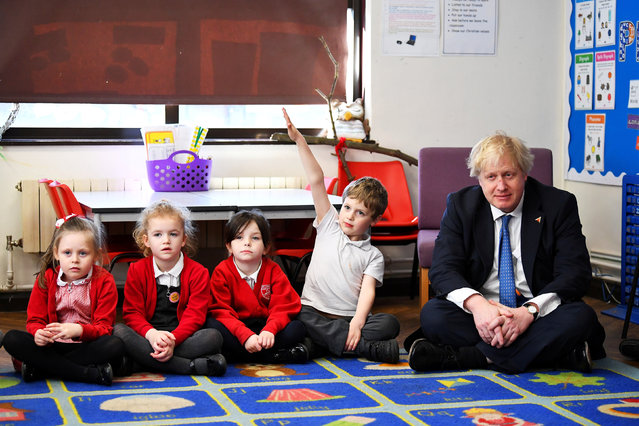 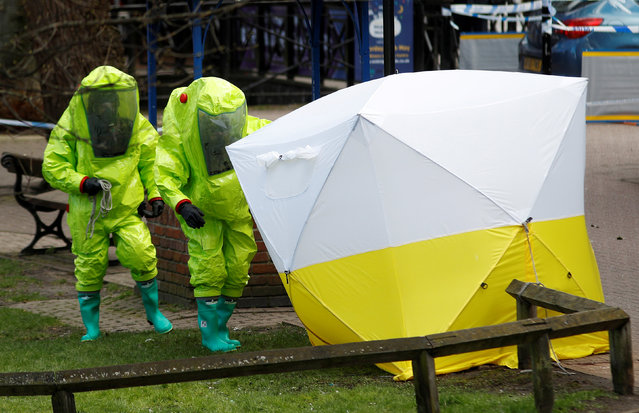 The forensic tent, covering the bench where Sergei Skripal and his daughter Yulia were found, is repositioned by officials in protective suits in the centre of Salisbury, Britain, March 8, 2018. (Photo by Peter Nicholls/Reuters) 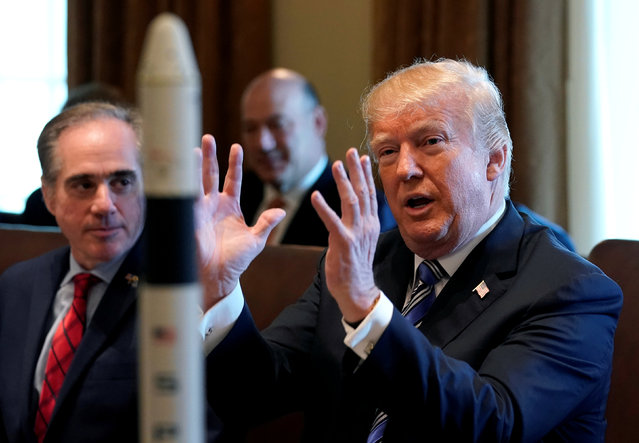 With a rocket ship on the table, U.S. President Donald Trump speaks about the space program during a cabinet meeting at the White House in Washington, U.S., March 8, 2018. (Photo by Kevin Lamarque/Reuters) 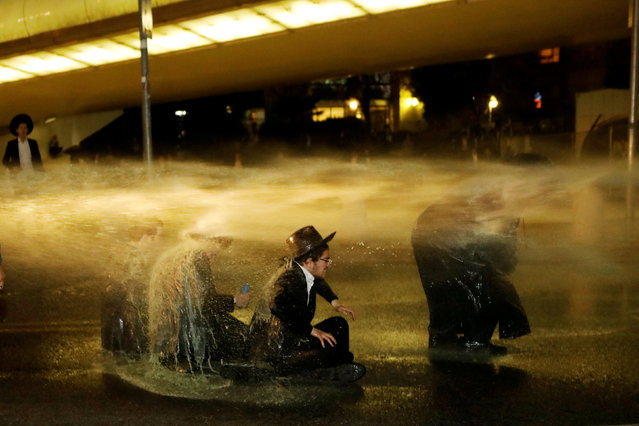 Israeli ultra-Orthodox Jewish men sit as a water canon is activated during a protest against the detention of a member of their community who refuses to serve in the Israeli army, in Jerusalem March 8, 2018. (Photo by Ronen Zvulun/Reuters) 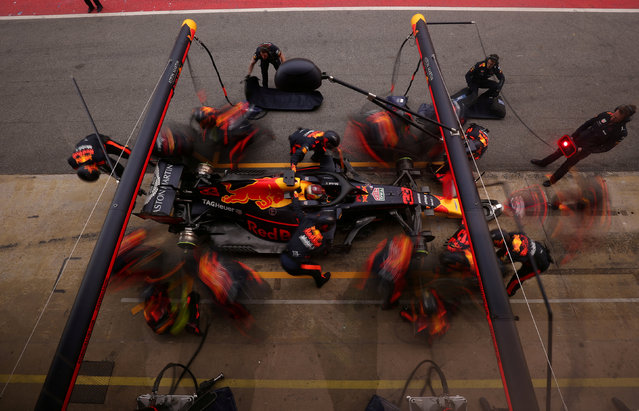 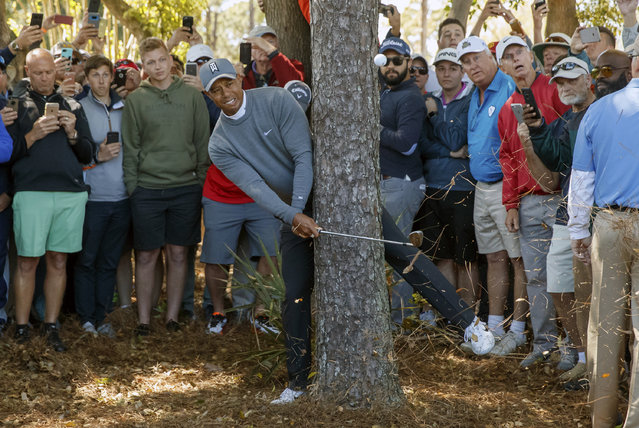 Tiger Woods hits from behind a tree on the fourth hole during the first round of the Valspar Championship golf tournament Thursday, March 8, 2018, in Palm Harbor, Fla. (Photo by v/AP Photo) 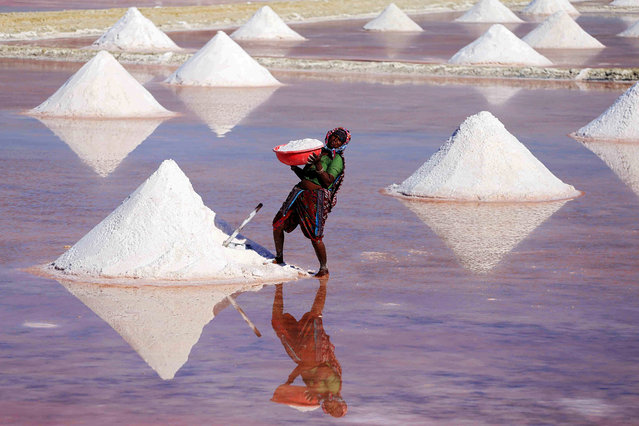 An Indian labourer works on a salt pan in the outskirts of Nagaur district in the Indian state of Rajasthan on March 7, 2018, ahead of International Women's Day. International Women's Day is celebrated on March 8 every year and commemorates the movement for women's rights. (Photo by Himanshu Sharma/AFP Photo)
Edit Del
09 Mar 2018 08:49:00, post received 0 comments
Publication archive:
←   →
Popular tags:
All tags
Last searches: