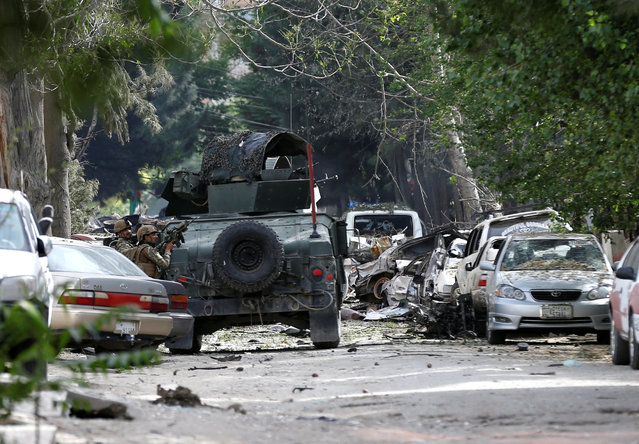 Afghan security forces take position during a gunmen attack in Kabul, Afghanistan on May 8, 2019. (Photo by Mohammad Ismail/Reuters) 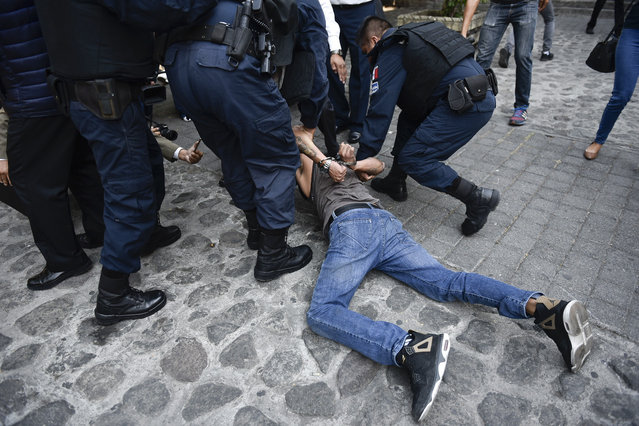 Police arrest a man who started shooting outside city hall in Cuernavaca, Mexico, Wednesday, May 8, 2019. A union official accompanying protesting street vendors and another trade unionist died during the shooting, while a TV cameraman and another person were wounded, according to officials (Photo by Tony Rivera/AP Photo) 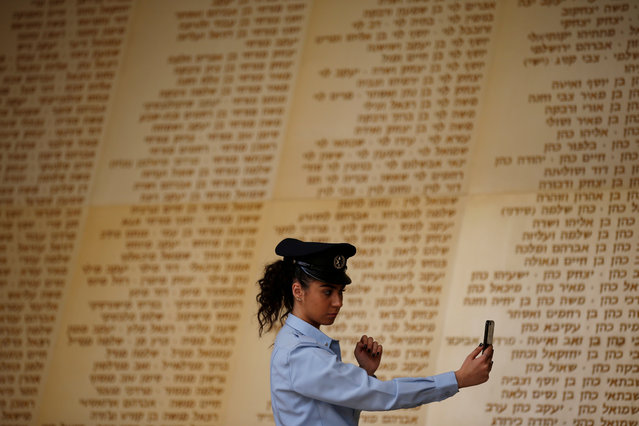 An Israeli policewoman looks at her phone as she stands in front of a monument engraved with names of fallen Israeli soldiers, before a ceremony marking Memorial Day, which commemorates the fallen soldiers of Israel, at a monument in Jerusalem on May 7, 2019. (Photo by Ronen Zvulun/Reuters) 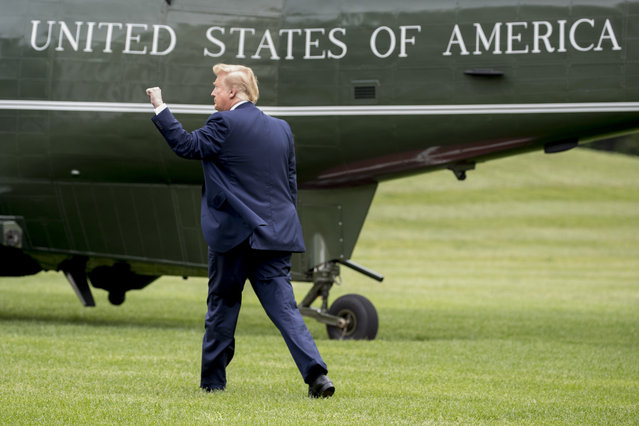 President Donald Trump walks on the South Lawn of the White House in Washington, Wednesday, May 8, 2019, to board Marine One for a short trip to Andrews Air Force Base, Md., to travel to Florida to visit with those affected by Hurricane Michael and attend a rally. (Photo by Andrew Harnik/AP Photo) 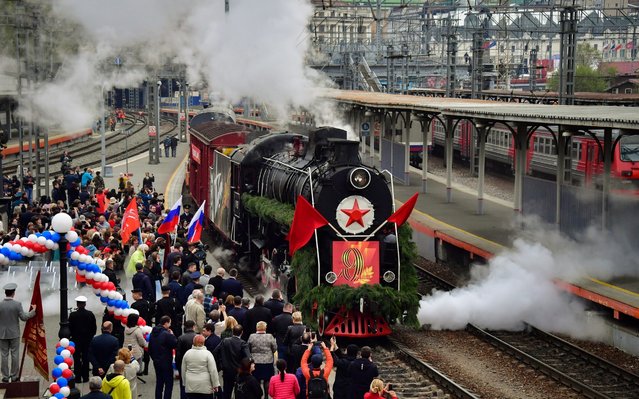 The Pobeda (Victory) retro train arrives at a railway station in Vladivostok, Russia on May 8, 2019 on the eve of the 74th anniversary of the victory over Nazi Germany in the Great Patriotic War of 1941-1945, the Eastern Front of World War II. (Photo by Yuri Smityuk/TASS) 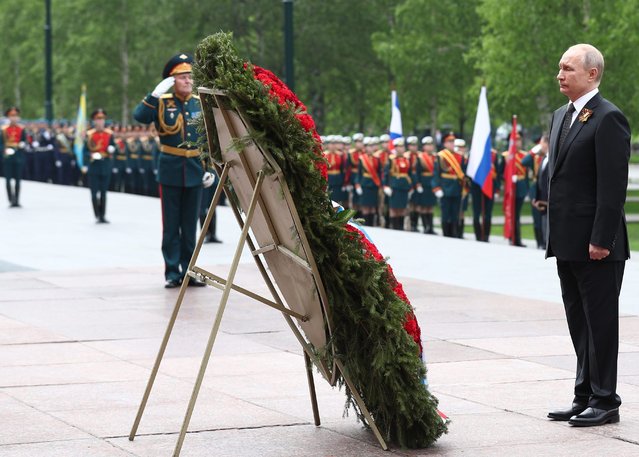 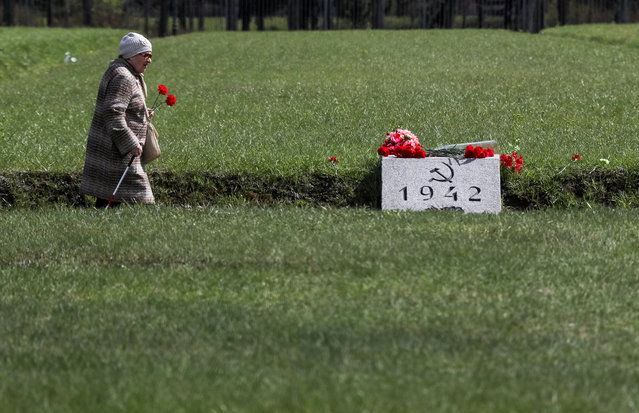 A woman carries flowers at the Piskaryovskoye Memorial Cemetery on the eve of the Victory Day, marking the 74th anniversary of the victory over Nazi Germany in World War Two, in Saint Petersburg, Russia on May 8, 2019. (Photo by Anton Vaganov/Reuters) 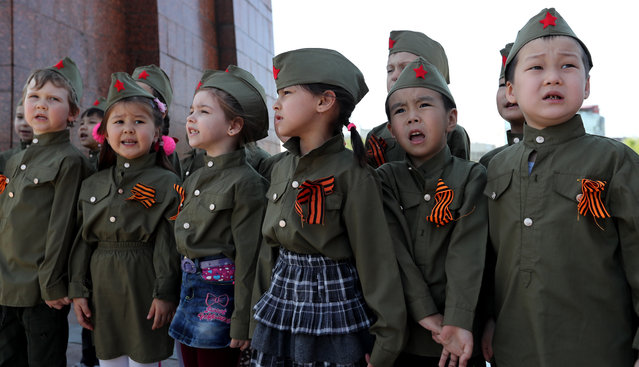 Kyrgyz children sing during meetings with World War II veterans in the capital of Kyrgyzstan on Victory Square, Bishkek, Kyrgyzstan, 07 April 2019. Kyrgyz marks the 74th anniversary of the victory in the World War II over Nazi Germany. The Soviet Union lost 27 million people in the war. (Photo by Igor Kovalenko/EPA/EFE) 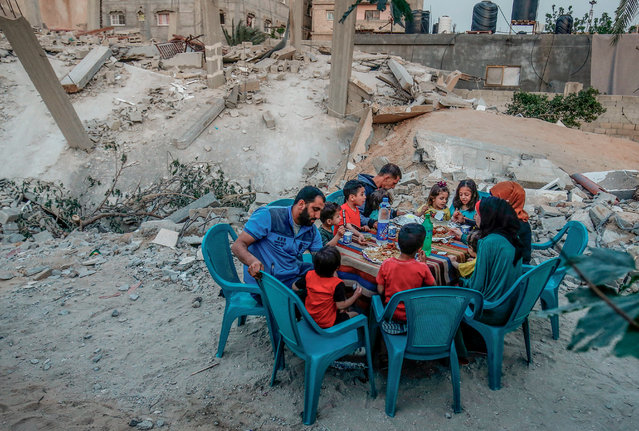 A Palestinian family break their fast next to their house that was destroyed during the two-day escalation, in Rafah the southern Gaza Strip on May 8, 2019. Palestinian leaders in Gaza agreed to a ceasefire with Israel on May 6, 2019 to end a deadly two-day escalation in violence that threatened to widen into a fourth war between them since 2008. (Photo by Said Khatib/AFP Photo) 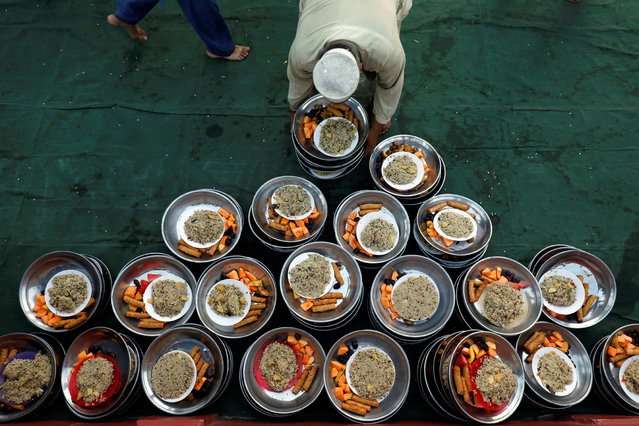 A volunteer arranges food plates for the people to break fast during the fasting month of Ramadan at a mosque in Karachi, Pakistan, May 7, 2019. (Photo by Akhtar Soomro/Reuters) 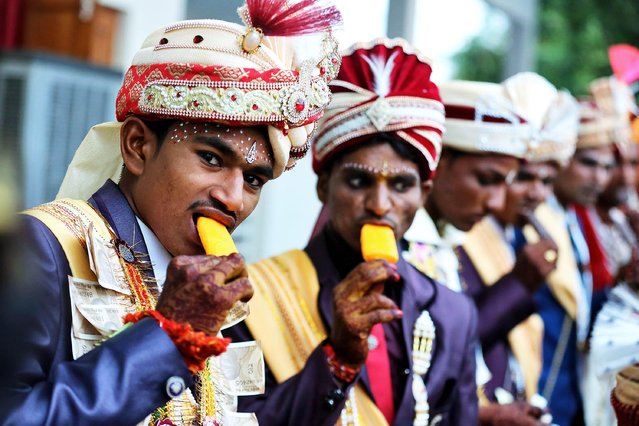 Bridegrooms of the Pal community eat ice lollies during a mass marriage ceremony on the occasion of the “Akshay Tritiya” festival in Bhopal, India, 07 May 2019. Akshay Tritiya is considered one of the most auspicious days of the Hindu calendar. It is believed, any meaningful activity that started on this day would be fruitful. More than 52 couples of the community tied the nuptial knot during the mass marriage ceremony. (Photo by Sanjeev Gupta/EPA/EFE) 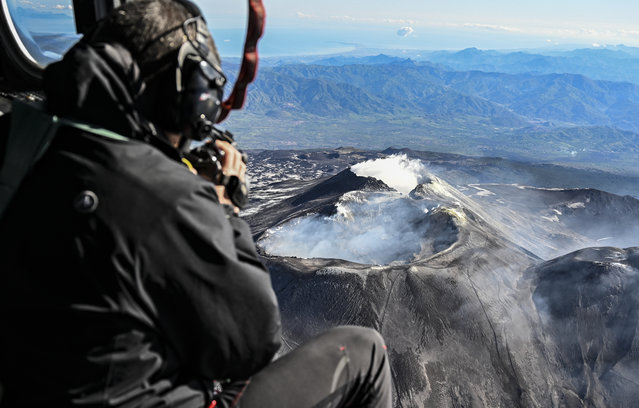 The summit craters of the volcano Etna during a flight with the Coast Guard helicopter on May 8, 2019 in Catania, Italy. On board there were volcanologists from the INGV (National Institute of Geophysics and Volcanology) who, with special thermal cameras, monitored the activity of the largest active volcano in Europe. (Photo by Fabrizio Villa/Getty Images) 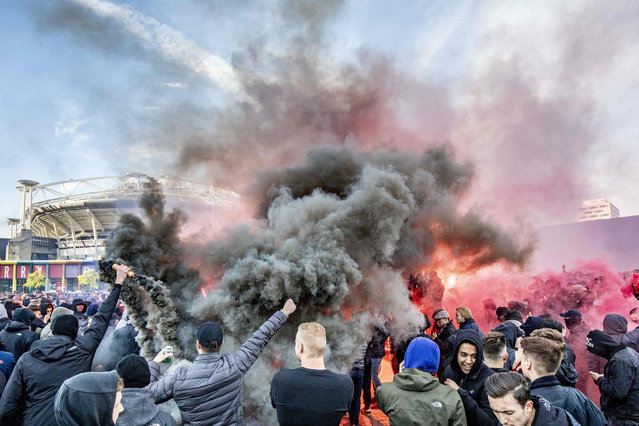 Ajax fans wave flares outside the Johan Cruyff Arena prior to the UEFA Champions League semi-final second leg football match between Ajax Amsterdam and Tottenham Hotspur, in Amsterdam, on May 8, 2019. (Photo by Niels Wenstedt/ANP/AFP Photo) 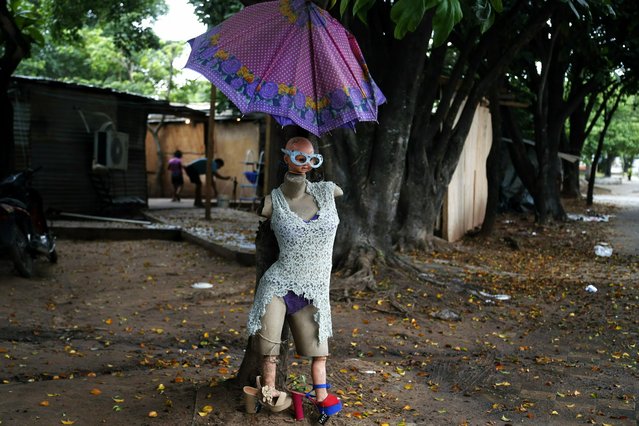 A mannequin nicknamed “Miss Evacuated”, placed by evacuee Rosa Nuñez, stands outside a shelter for flood victims in Asuncion, Paraguay, Tuesday, May 7, 2019. Officials say they’ve had to evacuate some 40,000 people due to unusually heavy rains since March. (Photo by Jorge Saenz/AP Photo) 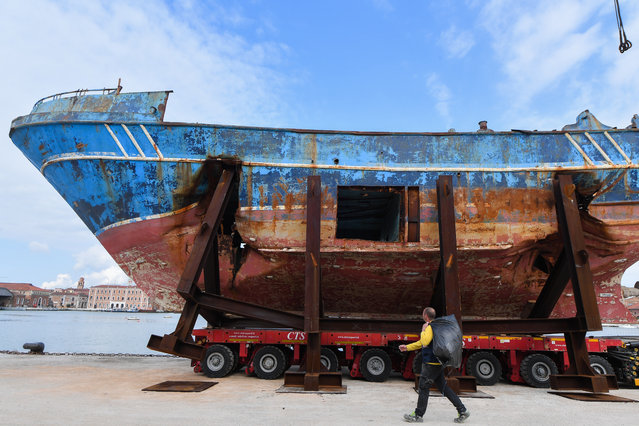 The fishing vessel “Barca Nostra” (Our Ship) that sank on April 18, 2015 trapping hundreds of migrants in its hull, is being installed in Venice's former shipyards as part of the centerpiece of a new art project by Swiss-Icelandic artist Christoph Buechel, prior to the the 58th International Art Exhibition of the Venice Biennale, on May 7, 2019 in Venice. The 58th International Art Exhibition will open to the public from May 11 to November 24, 2019. (Photo by Tiziana Fabi/AFP Photo) 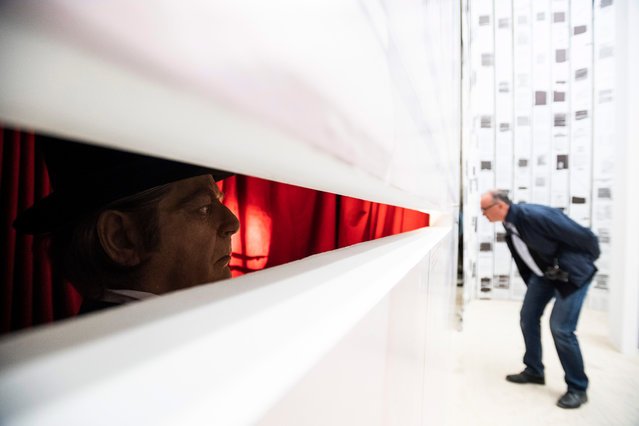 A visitor at the pavilion of Chile at the 58th International Art Exhibition of the Biennale in Venice, Italy, 08 May 2019. The art event runs from 11 May to 24 November 2019. (Photo by Marton Monus/EPA/EFE) 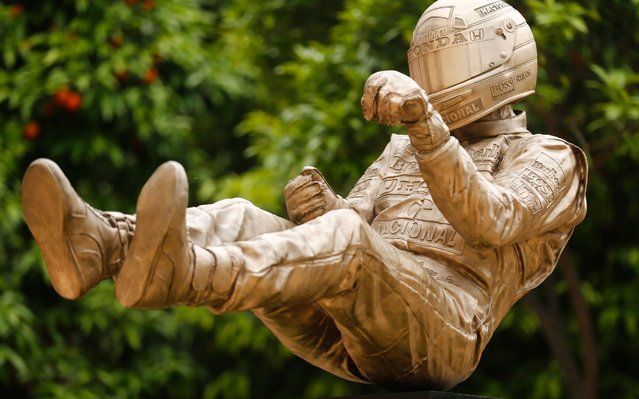 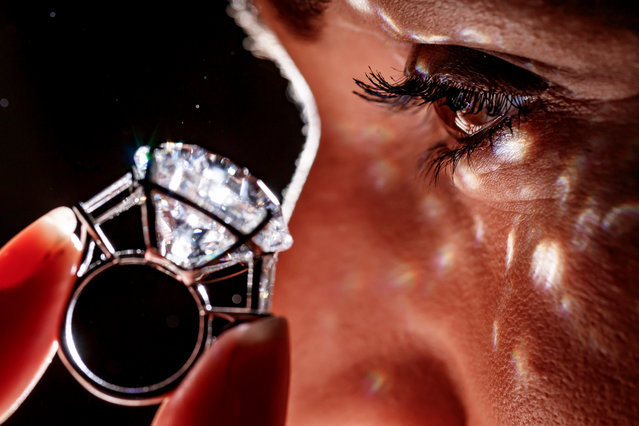 A Sotheby's employee poses with a claw-set diamond ring weighing 36.57 carats during a press preview of an upcoming auction from Sotheby's in Geneva, Switzerland, 08 May 2019. The ring is expected to reach between 4,500,000 to 5,500,000 US Dollars during the “Magnificent Jewels and Noble Jewels” auction on May 14 in Geneva. (Photo by Valentin Flauraud/EPA/EFE)
Edit Del
10 May 2019 00:07:00, post received 0 comments
Publication archive:
←   →
Popular tags:
All tags
Last searches: