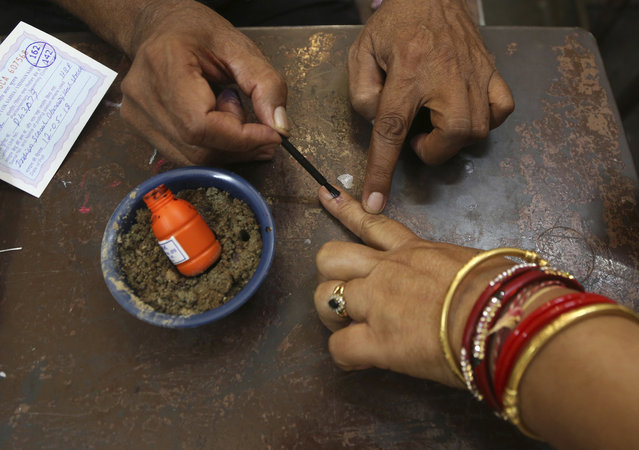 A polling officer marks the finger of a woman voter with indelible ink at a polling station in Bangalore, India, Saturday, May 12, 2018. India's southern state of Karnataka headed to the polls Saturday to elect 224 lawmakers ahead of country's general elections in 2019. (Photo by Aijaz Rahi/AP Photo) 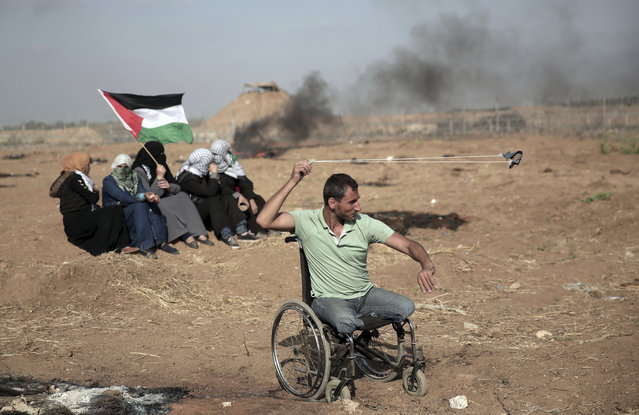 A disabled Palestinian protester hurls stones at Israeli troops during a protest at the Gaza Strip's border with Israel, Friday, May 11, 2018. Gaza activists burned tires near the sealed border with Israel on Friday in a seventh weekly protest aimed at shaking off a decade-old blockade of their territory. Israeli soldiers fired tear gas volleys from the other side of the border fence. (Photo by Khalil Hamra/AP Photo) 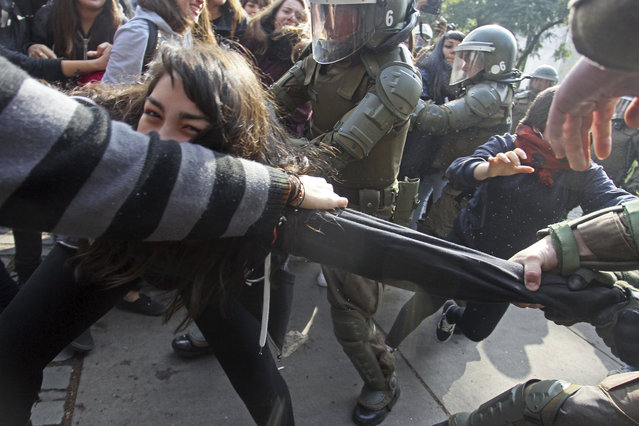 A protester is pulled between fellow demonstrators and police trying to arrest her, during a high school student march for higher quality public education, a few blocks from the presidential palace in Santiago, Chile, Wednesday May 9, 2018. Students protested near the presidential palace instead of the area far from downtown where the government authorized them to gather. (Photo by Luis Hidalgo/AP Photo) 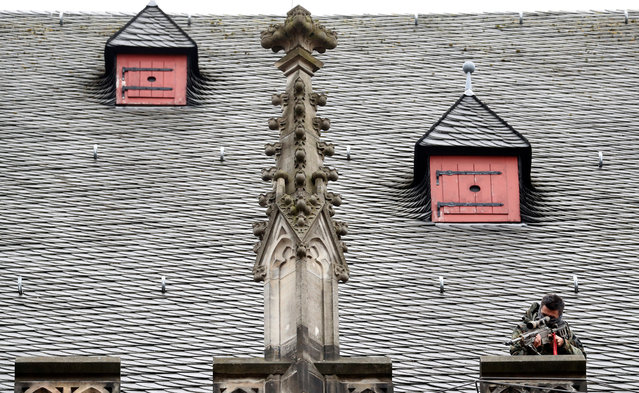 A German sniper takes position on the roof of a building during the Charlemagne Prize (Karlspreis) ceremony at the town hall in Aachen, Germany, 10 May 2018. The International Charlemagne Prize of the German City of Aachen is awarded annually since 1950 to people who have contributed to the ideals upon which Europe has been founded. (Photo by Friedemann Vogel/EPA/EFE) 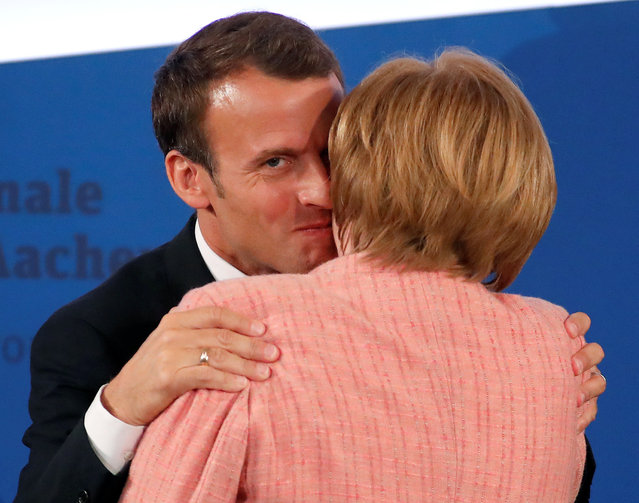 French President Emmanuel Macron is congratulated by German Chancellor Angela Merkel after being awarded the Charlemagne Prize during a ceremony in Aachen, Germany May 10, 2018. (Photo by Wolfgang Rattay/Reuters) 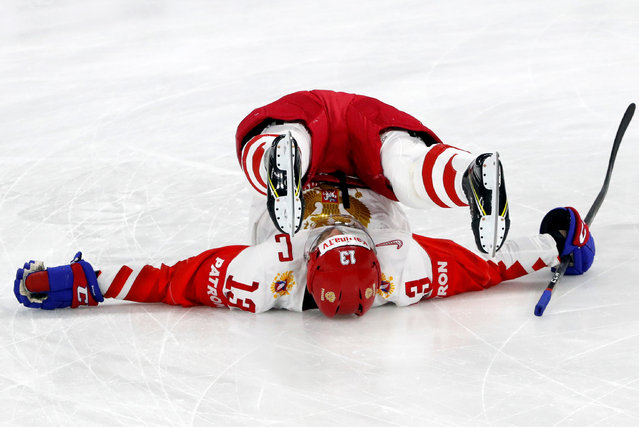 Pavel Datsyuk of Russia warms upk in the 2018 IIHF Ice Hockey World Championship Group A Preliminary Round match against the Czech Republic at Royal Arena in Copenhagen, Denmark on May 10, 2018. (Photo by Grigory Dukor/Reuters) 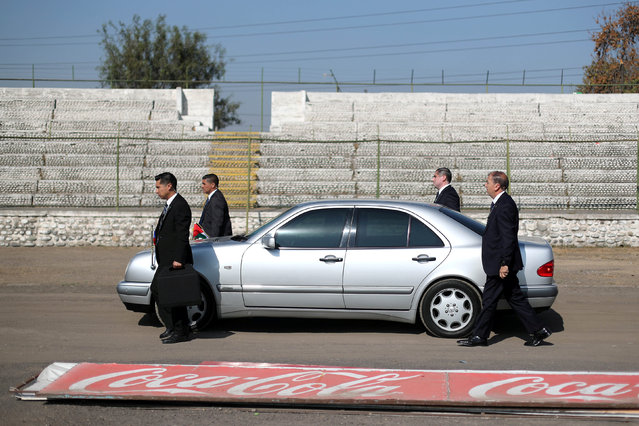 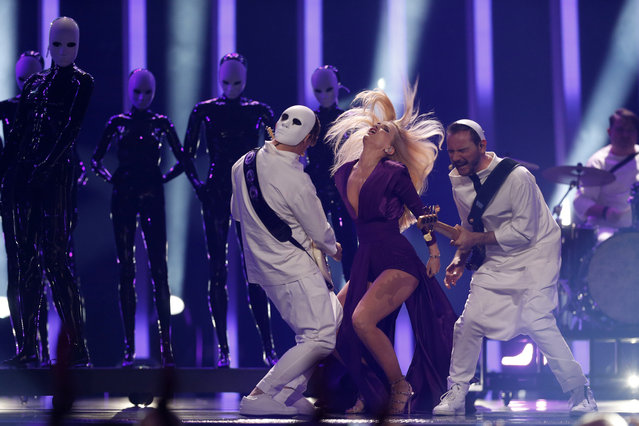 Romania's The Humans perform “Goodbye” during the Semi-Final 2 for Eurovision Song Contest 2018 in Lisbon, Portugal on May 10, 2018. (Photo by Pedro Nunes/Reuters) 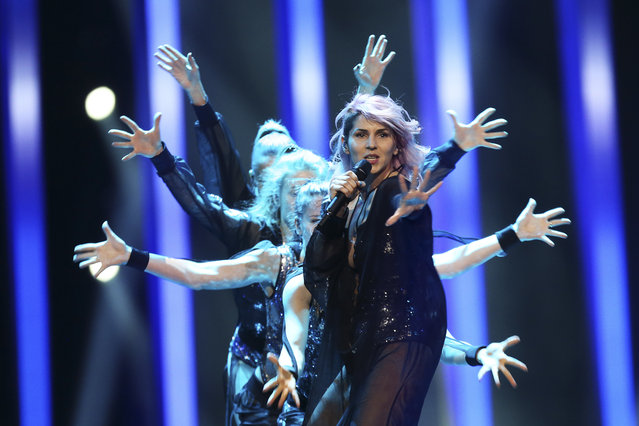 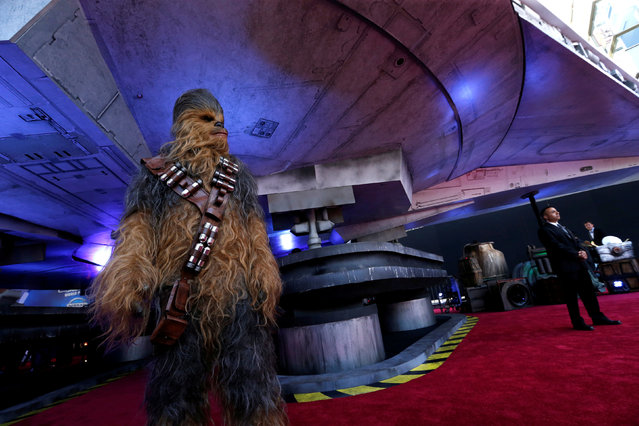 The character of Chewbacca poses at the premiere for the movie “Solo: A Star Wars Story” in Los Angeles, California, U.S., May 10, 2018. (Photo by Mario Anzuoni/Reuters) 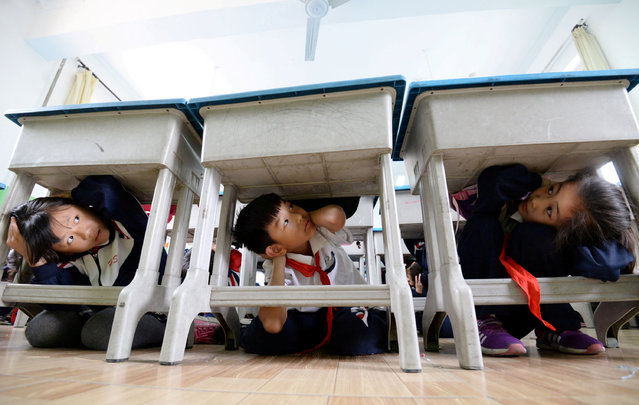 Primary school students take part in an earthquake drill ahead of the 10th anniversary of the 2008 Sichuan earthquake, inside a classroom in Handan, Hebei province, China May 11, 2018. (Photo by Reuters/China Stringer Network) 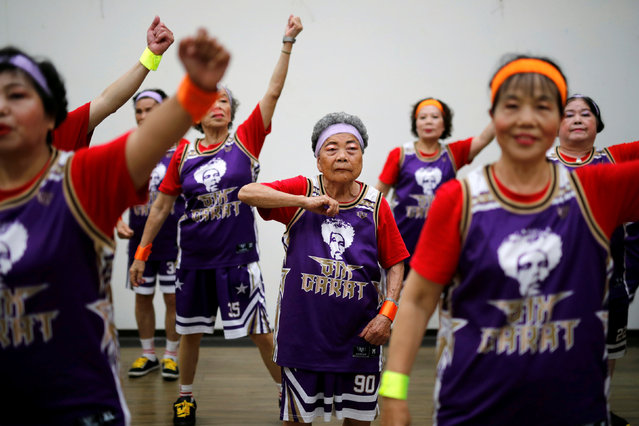 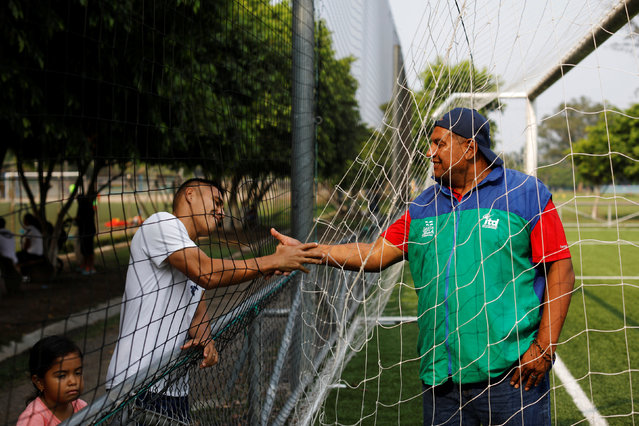 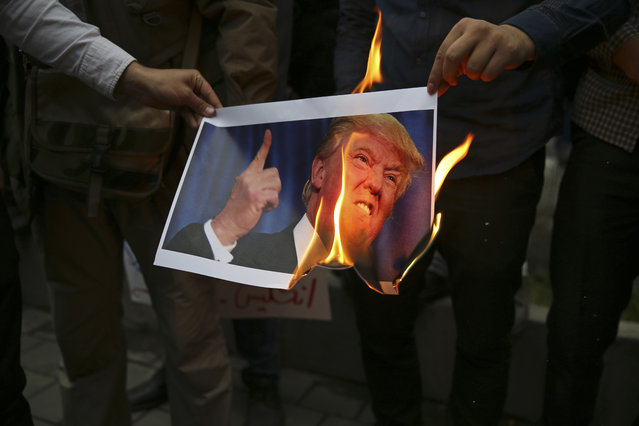 Iranian demonstrators burn a picture of the U.S. President Donald Trump during during a protest in front of the former U.S. Embassy in response to President Donald Trump's decision Tuesday to pull out of the nuclear deal and renew sanctions, in Tehran, Iran, Wednesday, May 9, 2018. (Photo by Vahid Salemi/AP Photo) 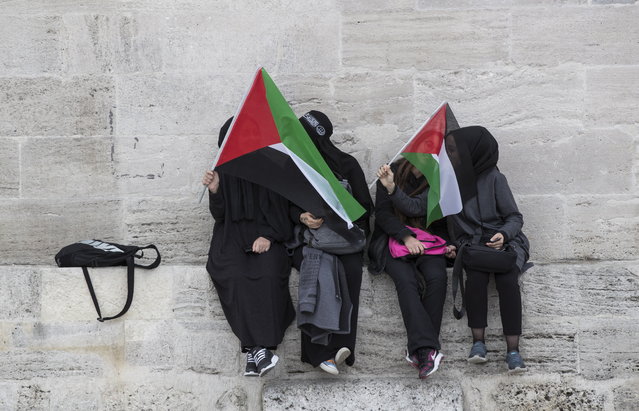 Protesters hold Palestinian flags before a demonstration against Israel after Friday prayers in Istanbul, Turkey, 11 May 2018. According to the UN High Commissioner for Human Rights, 42 Palestinians were killed and more than 5,500 wounded since 30 March. The protests are held as part of the Great March of Return movement since 30 March to call for the right of Palestinians across the Middle East to return to homes they fled in the war surrounding the 1948 creation of Israel, also called “Nakba”. (Photo by Tolga Bozoglu/EPA/EFE) 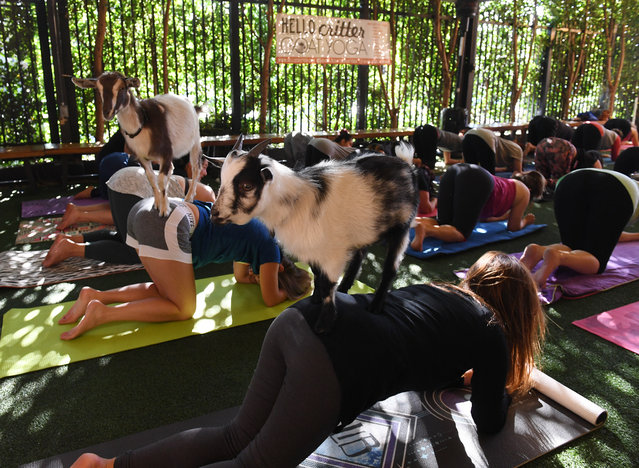 Yoga students take a class with Nigerian Dwarf goats held by the 'Hello Critter Goat Yoga' team at the Golden Road Pub in Los Angeles, California on May 7, 2018. The goat yoga fitness craze is sweeping the United States with classes now held in pubs, farms and halls across the country. (Photo by Mark Ralston/AFP Photo) 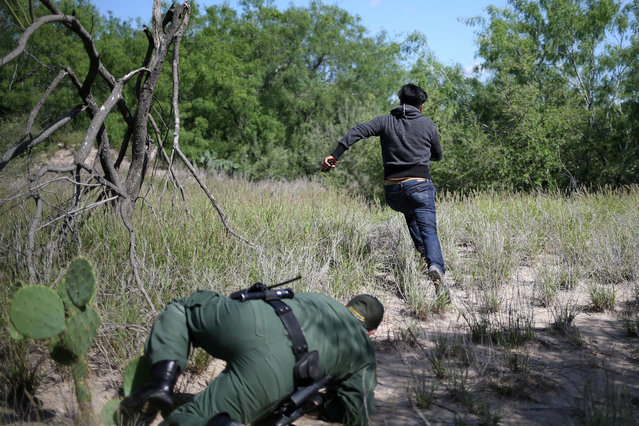 A man who illegally crossed the Mexico-U.S. border evades a U.S. Border Patrol agent near McAllen, Texas, U.S., May 8, 2018. (Photo by Loren Elliott/Reuters) 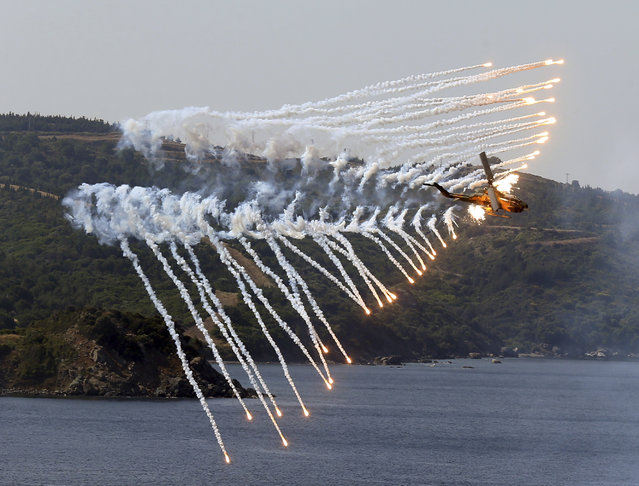 A Turkish army helicopter in action after an amphibious landing during EFES 2018 drills in Seferihisar in Aegean Sea near Izmir, Turkey, Thursday, May 10, 2018. Turkey shows off its military hardware in the EFES 2018 drill. (Photo by Emre Tazegul/AP Photo) 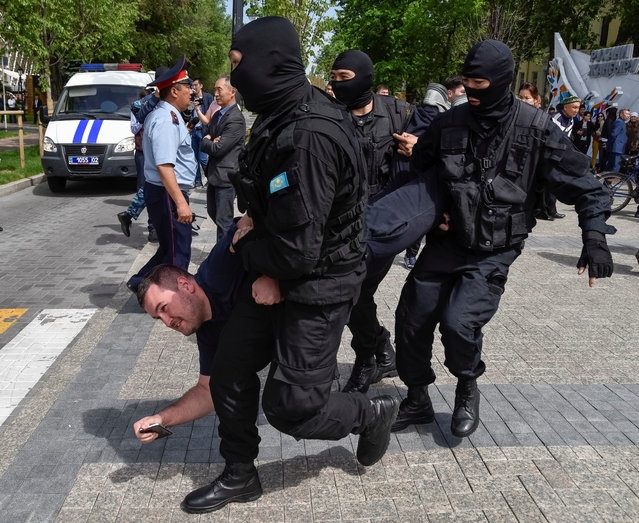 Policemen detain an opposition supporter during a protest rally in Almaty, Kazakhstan May 10, 2018. (Photo by Mariya Gordeyeva/Reuters) 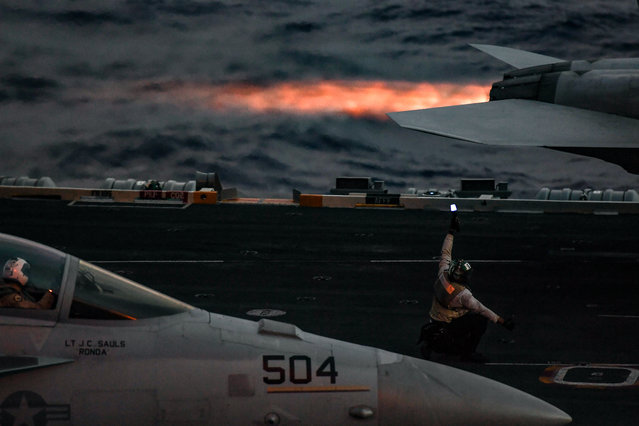 A crew member of the 330 meters US navy aircraft carrier Harry S. Truman gestures as a pilot of an F18 Hornet fighter jet waits to take off on eastern Mediterranean Sea on May 8, 2018. The USS Harry S. Truman Carrier Strike Group on May 3 began air operations in support of Operation Inherent Resolve, conducting flight operations against the so called Islamic State (IS) targets in Syria and Iraq. The strike group includes a guided-missile cruiser and four guided-missile destroyers. (Photo by Aris Messinis/AFP Photo)
Edit Del
12 May 2018 09:28:00, post received 0 comments
Publication archive:
←   →
Popular tags:
All tags
Last searches: