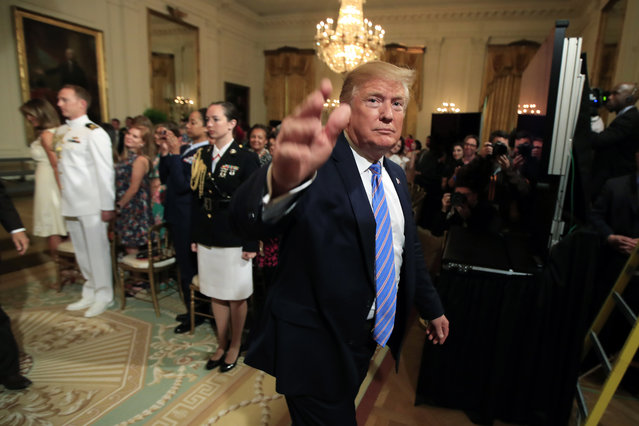 President Donald Trump waves as he leaves the East Room during a celebration of military mothers with first lady Melania Trump at the White House in Washington, Friday, May 10, 2019. (Photo by Manuel Balce Ceneta/AP Photo) 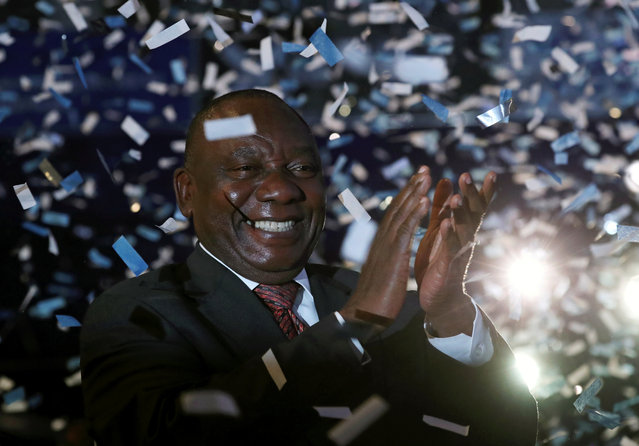 South African President Cyril Ramaphosa celebrates victory for his African National Congress (ANC) party at the announcement of results of the country's parliamentary and provincial elections in Pretoria, South Africa, May 11, 2019. (Photo by Mike Hutchings/Reuters) 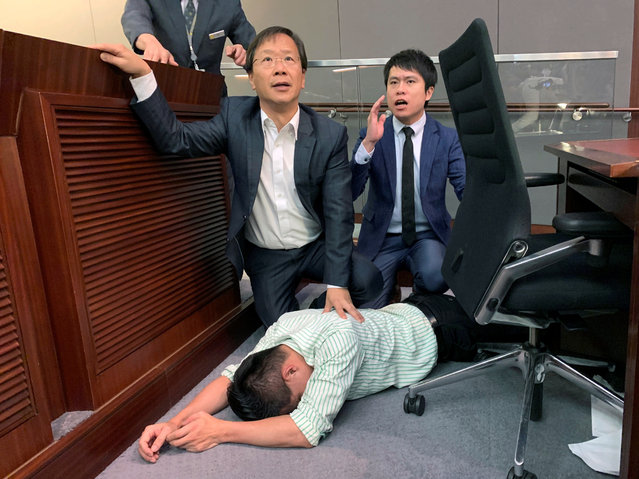 Pro-democracy lawmaker Gary Fan lies down after clashes with pro-Beijing lawmakers during a meeting for control of a meeting room to consider the controversial extradition bill, in Hong Kong, China on May 11, 2019. (Photo by James Pomfret/Reuters) 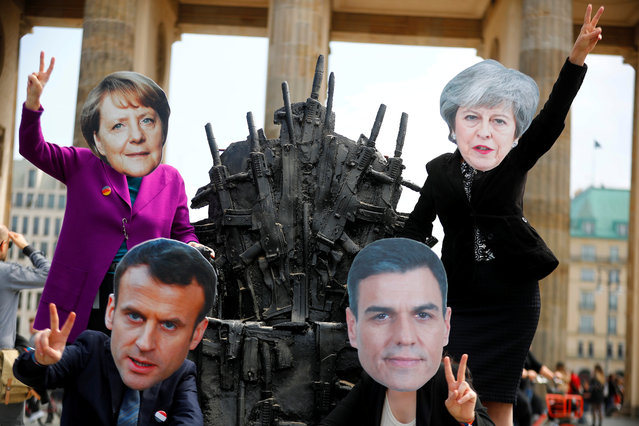 Activists wearing masks of German Chancellor Angela Merkel, French President Emmanuel Macron, British Prime Minister Theresa May and Spanish Prime Minister Pedro Sanchez pose at an artwork resembling the iron throne from the TV series “Game of Thrones“, but made of guns, to protest against exporting arms, in front of the Brandenburg Gate in Berlin, Germany, May 11, 2019. (Photo by Hannibal Hanschke/Reuters) 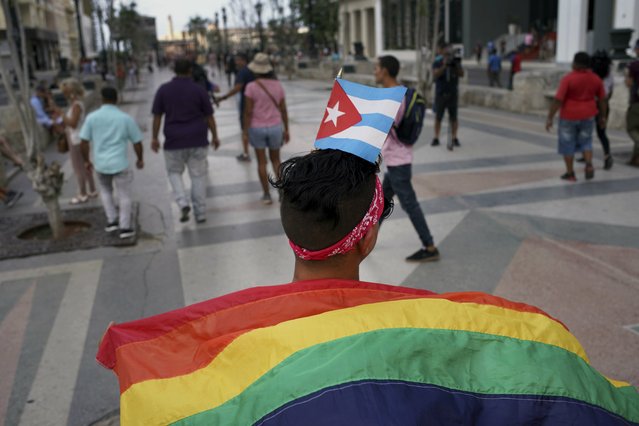 Gay rights activists take part in an unauthorized march in Havana, Cuba, Saturday, May 11, 2019. The march was organized largely using Cuba's new mobile internet, with gay-rights activists and groups of friends calling for a march over Facebook and WhatsApp after the government-run gay rights organization cancelled a Saturday march. (Photo by Ramon Espinosa/AP Photo) 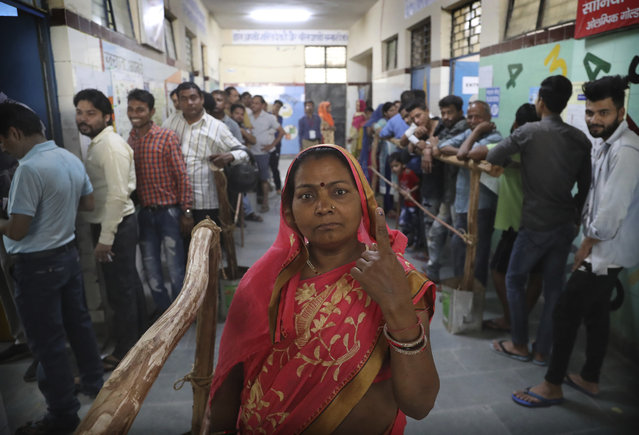 A woman displays indelible ink mark on her finger after casting her vote as others wait in queue in New Delhi, India, Sunday, May 12, 2019. Indians are voting in the next-to-last round of 6-week-long national elections, marked by a highly acrimonious campaign with Prime Minister Narendra Modi flaying the opposition Congress party rival Rahul Gandh's family for the country's ills. (Photo by Manish Swarup/AP Photo) 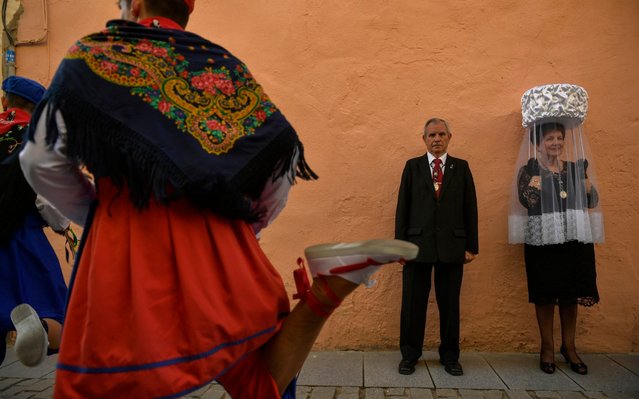 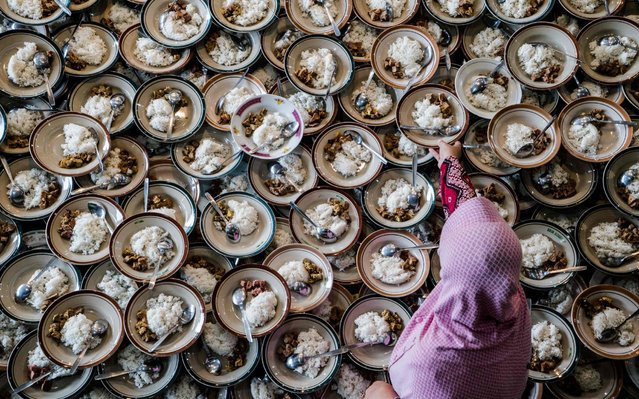 An Indonesian woman prepares meals for Muslims breaking their fast during the holy month of Ramadan at Jogokariyan Mosque in Yogyakarta on May 11, 2019. (Photo by Oka Hamied/AFP Photo) 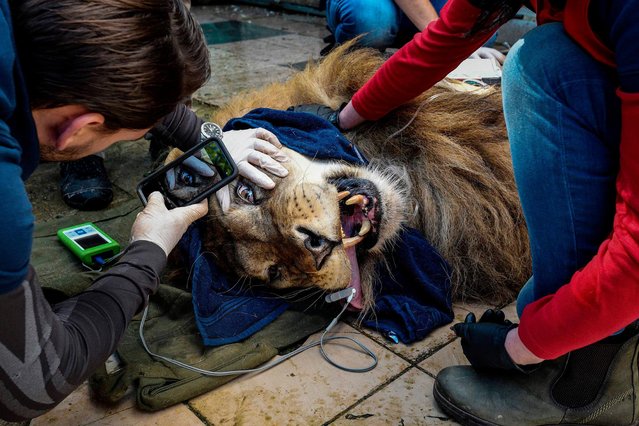 Ten years old lion Lenci is being check by animal welfare association Four Paws militants at Tirana's zoo on May 7, 2019 before its transfer along with two other lions to the Felida Big Cat Center in Netherlands. The three lions, rescued by Four Paws last October from a zoo where they were kept in deplorable conditions and provisionally welcomed in Tirana, were transported to the Netherlands where they will be placed in an establishment imitating their natural habitat. (Photo by Gent Shkullaku/AFP Photo) 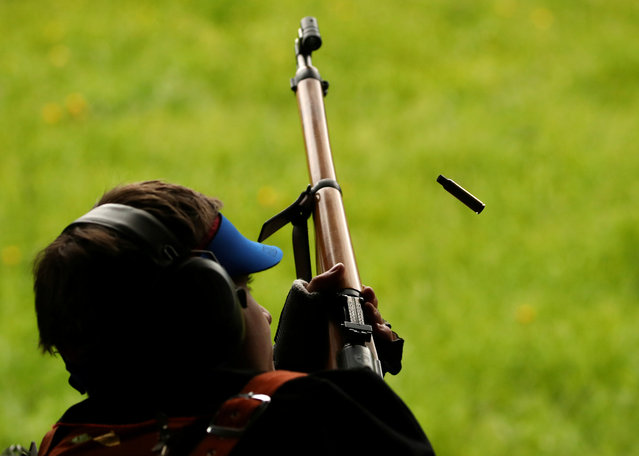 A participant ejects a case from his musket during the Fribourg County 300m rifle final , ahead of a May 19 vote on a referendum to tighten weapons ownership laws in line with EU steps, at the shooting range in Romont, Switzerland on May 11, 2019. (Photo by Denis Balibouse/Reuters) 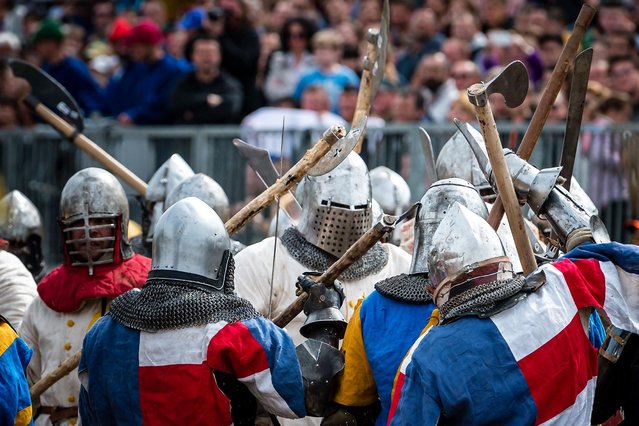 Enthusiasts wearing armour fight during the medieval tournament “Battle of the Nations” at the Smederevo fortress, in eastern Serbia, on May 5, 2019. Up to 25 countries are taking part in the annual historical medieval competition which was first held in Ukraine in 2009. (Photo by Andrej Isakovic/AFP Photo) 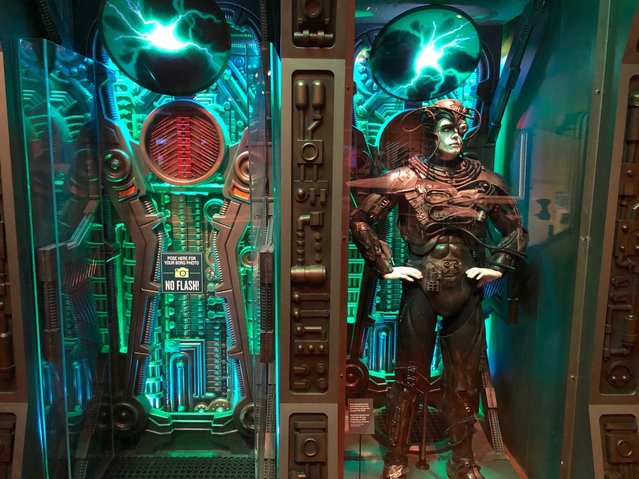 In this May 9, 2019 photo, a Borg costume from “Star Trek: The Next Generation” is displayed at the “Star Trek: Exploring New Worlds” exhibit at The Henry Ford Museum in Dearborn, Mich. The traveling exhibition runs through Sept. 2 at the museum and offers a look at more than 100 artifacts and props from the original TV series and its spinoffs. It also explores its enduring impact on culture, from arts and technology to fashion and literature. (Photo by Ed Pevos/Ann Arbor News via AP Photo) 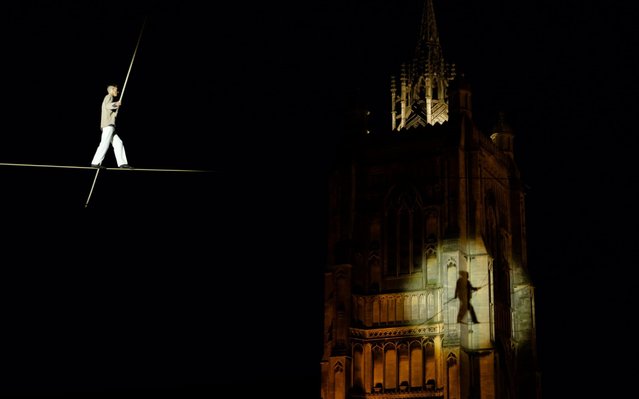 Death defying high-wire walk by Circus artist Chris Bullzini on a 230-metre long journey from Jarrold department store, across Norwich Market, with Sir Peter Mancroft Church in the background, to the top of the market accompanied by a live soundscape to launch the Norfolk & Norwich Festival 2019 on May 10, 2019 in Norwich, England. (Photo by Mark Bullimore/Getty Images) 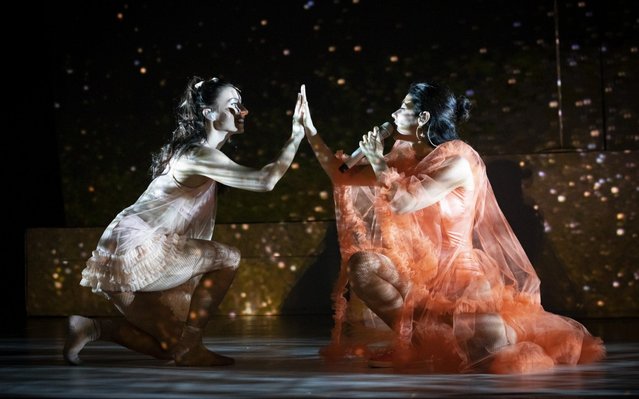