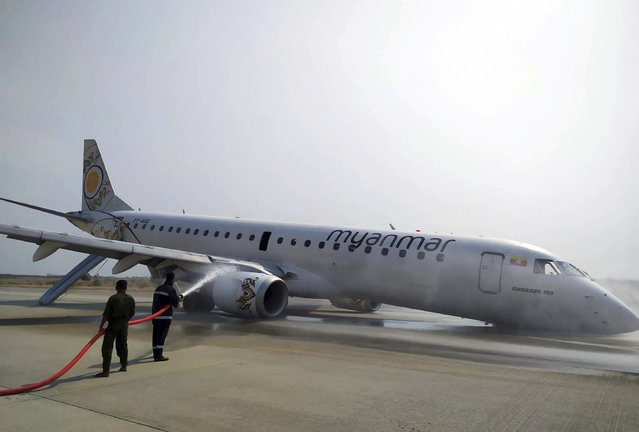 Firefighters work with hose on a plane of Myanmar National Airline (MNA) after an accident at Mandalay International airport Sunday, May 12, 2019, in Mandalay, Myanmar. All passengers and crew are reported safe and uninjured after a Myanmar National Airlines plane made a scheduled but emergency landing at Mandalay International Airport on only its rear landing wheels after the front landing gear failed to deploy. (Photo by Aung Thura via AP Photo) 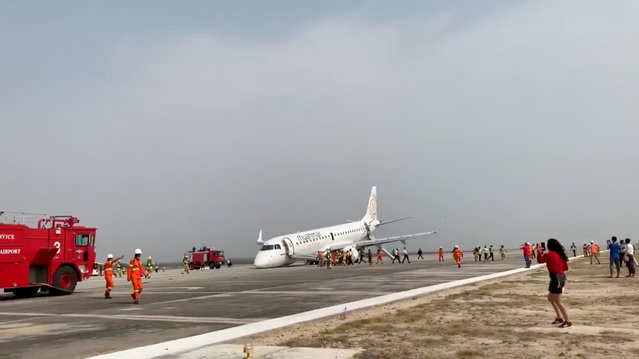 An evacuated passenger records on her phone as firefighters attend to the scene after Myanmar National Airlines flight UB103 landed without a front wheel at Mandalay International Airport in Tada-U, Myanmar May 12, 2019 in this still image taken from social media video. (Photo by Nay Min via Reuters) 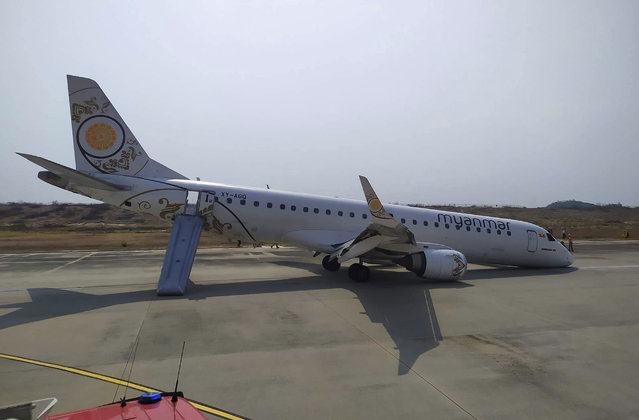 Rescue team gather near a plane of Myanmar National Airline (MNA) after an accident at Mandalay International airport Sunday, May 12, 2019, in Mandalay, Myanma. (Photo by Aung Thura via AP Photo) 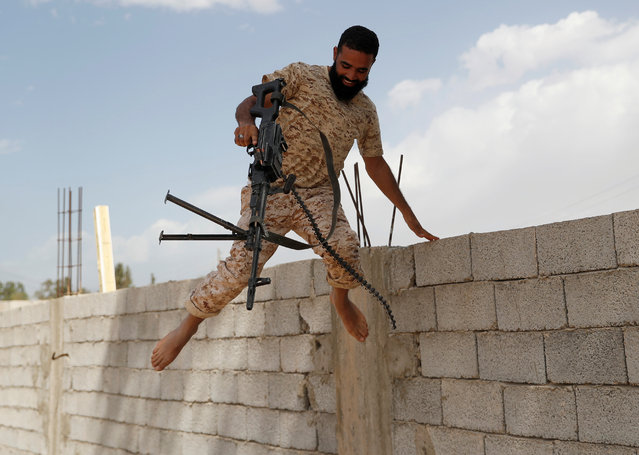 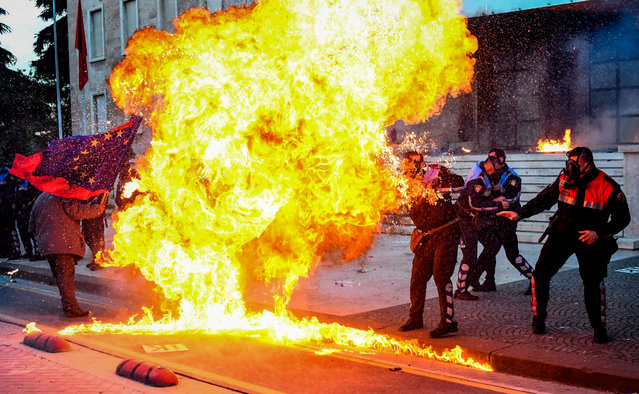 Albanian policemen try to avoid the flames from a petrol bomb during an anti-government protest called by the opposition on May 11, 2019 in Tirana. (Photo by Gent Shkullaku/AFP Photo) 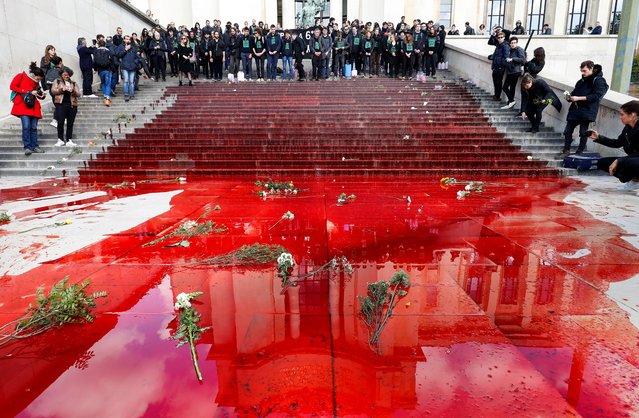 Members of the action group Extinction Rebellion (XR) gather after spilling fake blood on the steps of the Trocadero esplanade during a demonstration to alert on the state of decline of biodiversity, on May 12, 2019 in Paris. Extinction Rebellion (XR) is an international movement that uses non-violent civil disobedience to achieve radical change in order to minimise the risk of human extinction and ecological collapse. (Photo by Francois Guillot/AFP Photo) 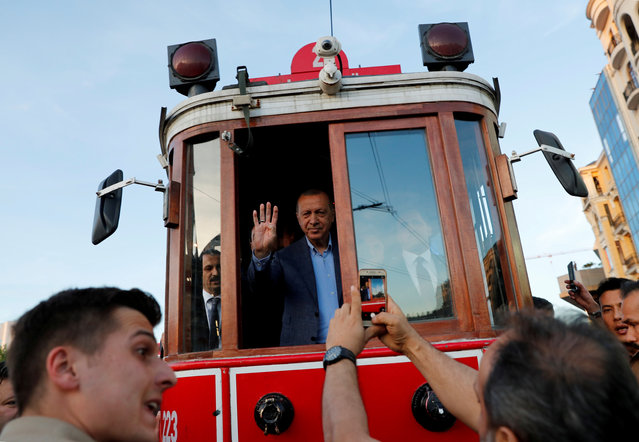 Turkish President Tayyip Erdogan greets his supporters as he rides on a vintage tram at Taksim Square in central Istanbul, Turkey, May 12, 2019. (Photo by Murad Sezer/Reuters) 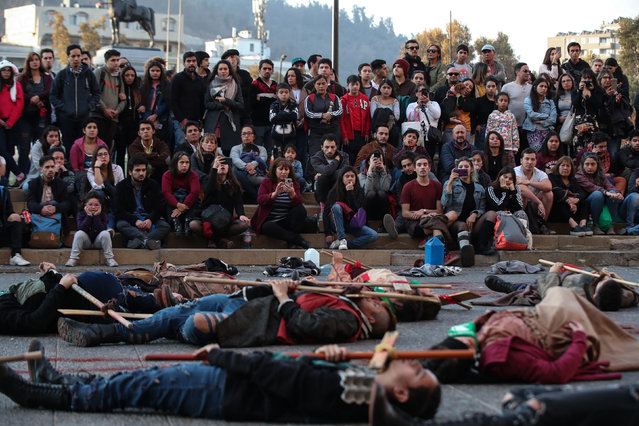 A group from the network of the “Teatro de Chile” students perform an artistic intervention in the central Plaza Baquedano during the National Day of Theater in Santiago, Chile, 11 May 2019. (Photo by Alberto Valdes/EPA/EFE) 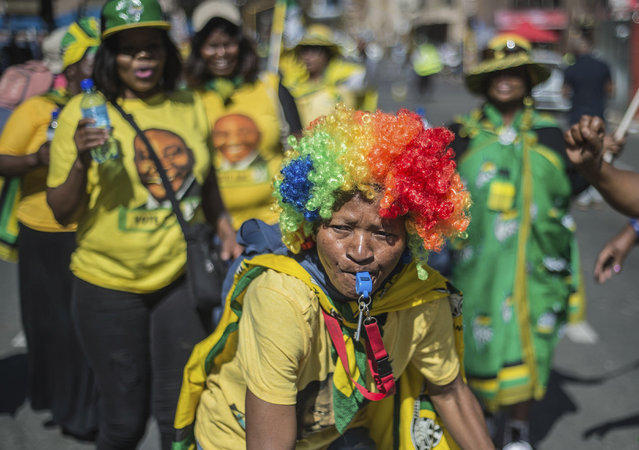 African National Congress (ANC) supporters gather outside the party's headquarters in downtown Johannesburg, Sunday, May 12, 2019 to celebrate the party's win in elections. South Africans voted Wednesday with results showing that the ruling ANC has won the national elections but has seen its share of the vote drop significantly. (Photo by Mujahid Safodien/AP Photo) 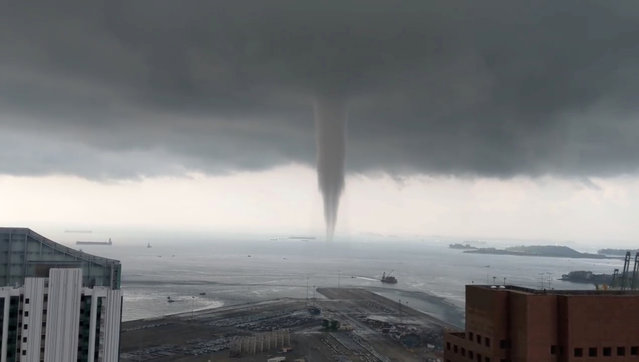 Boats sail near a swirling waterspout in Singapore on May 11, 2019, in this picture obtained from social media. (Photo by Mathieu Sneep via Reuters) 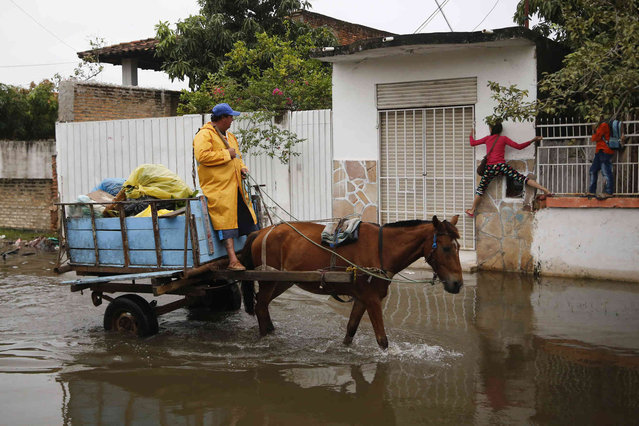 Children climb a wall to leave their home to go church for a catechism class, as a man drives a horse cart to collect domestic trash, at the Tacumbu neighborhood in Asuncion, Paraguay, Saturday, May 11, 2019. The Paraguay River's normal stage is 4 meters (13 feet), but it has reached 6.75 meters (22 feet) in the capital due to unusually heavy rains since March. (Photo by Jorge Saenz/AP Photo) 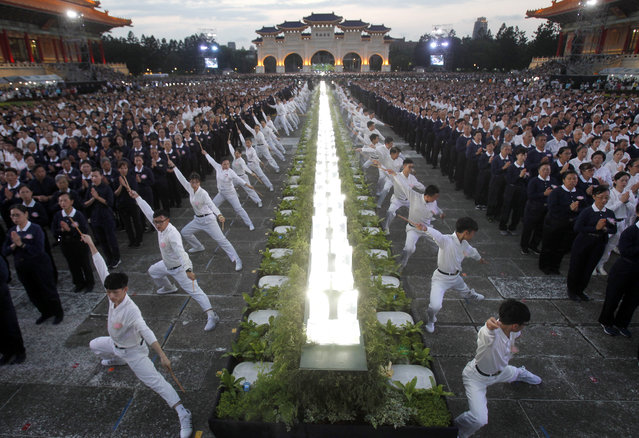 Taiwanese people perform during the Buddha's Birthday celebration in front of the Chiang Kai-shek Memorial Hall in Taipei, Taiwan, Sunday, May 12, 2019. Buddha's birthday is celebrated in East Asia on the eighth day of the fourth month in the Chinese lunar calendar. (Photo by Chiang Ying-ying/AP Photo) 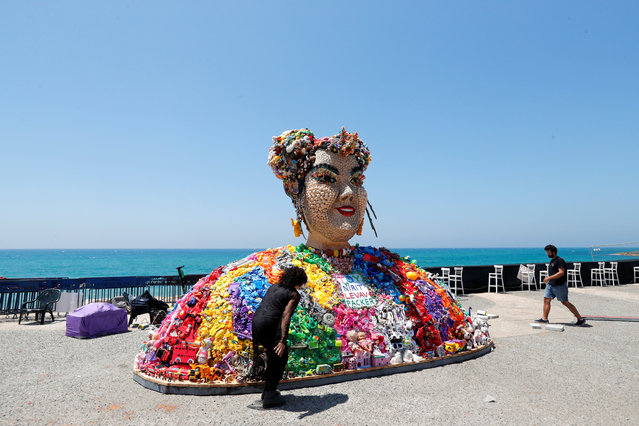 Israeli artist Nirit Levav Packer, looks at her artwork entitled “Toy”, the name of the last year's Eurovision Song Contest winning song by Israel's Netta Barzilai, as the opening ceremony of this year's contest begins tonight, in Tel Aviv, Israel on May 12, 2019. (Photo by Ronen Zvulun/Reuters) 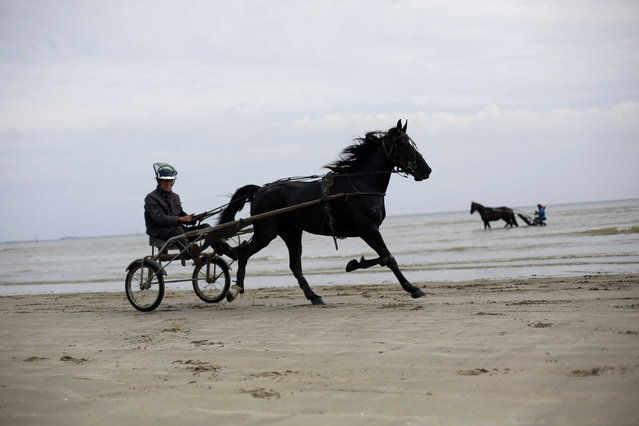 Riders take their horse and buggy on Utah Beach, in Normandy, western France, Friday, May 10, 2019. (Photo by Thibault Camus/AP Photo) 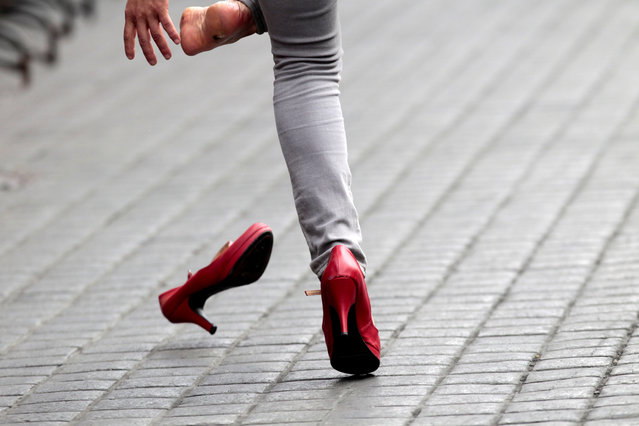 A participant takes part in a high heel race to protest in favor of gender equality in Monterrey, Mexico on May 12, 2019. (Photo by Daniel Becerril/Reuters) 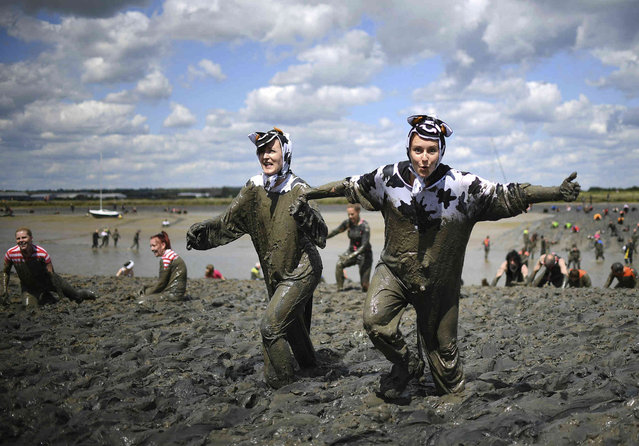 Competitors take part in the annual Maldon Mud Race, a charity event to race across the bed of the River Blackwater in Maldon, southern England on Sunday May 12, 2019. (Photo by Joe Giddens/PA Wire via AP Photo) 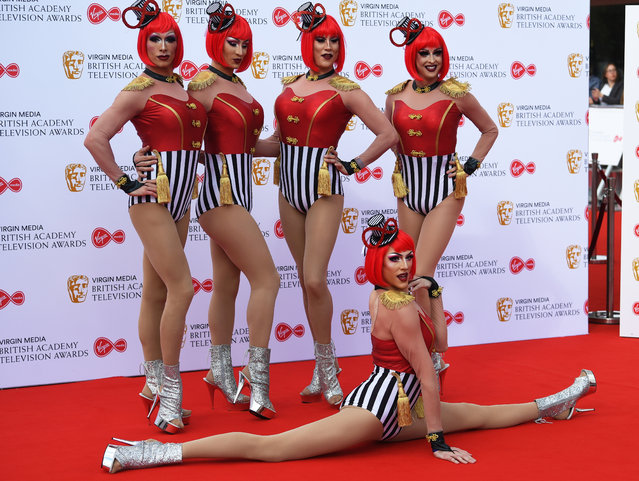