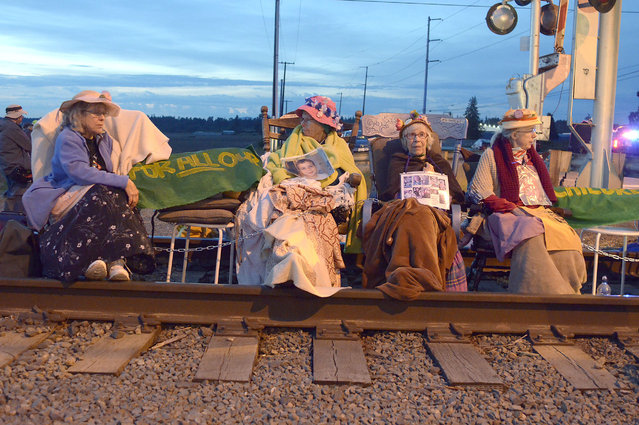 Members of the Seattle Raging Grannies sit in their rocking chairs chained together on the Burlington-Northern Railroad tracks at Farm to Market Road in Skagit County on Friday evening, May 13, 2016, in Burlington, Wash. From left are Deejay Sherman Peterson, Anne Thureson, Shirley Morrison and Rosy Betz-Zall. Hundreds of people in kayaks and on foot are gathering at the site of two oil refineries in Washington state to call for action on climate change and a fair transition away from fossil fuels. (Photo by Scott Terrell/Skagit Valley Herald via AP Photo) 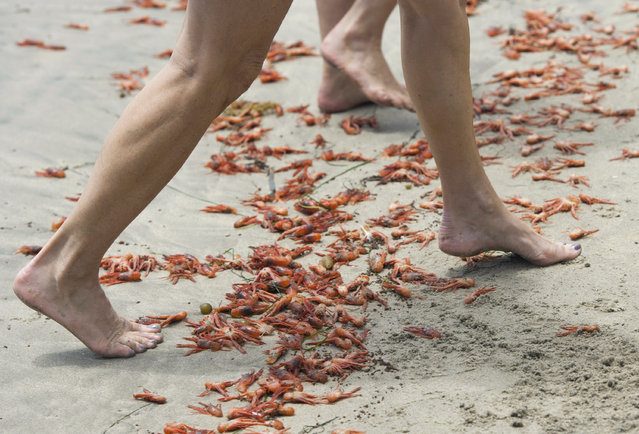 Sylvie Bergeron, of San Diego and her sister Line Bergeron, of Quebec, walk over tuna crabs that washed up onto the beach at Shaw's Cove in Laguna Beach, Calif. Friday, May 13, 2016. Pelagic red crabs are usually found off Baja California but currents that are part of the El Nino weather pattern are sweeping them north. (Photo by Kevin Sullivan/The Orange County Register via AP Photo) 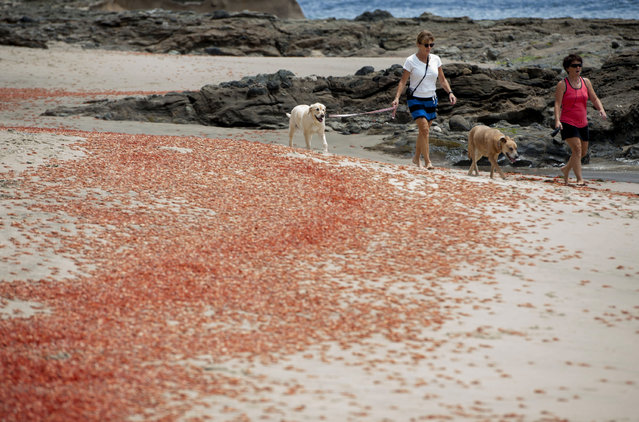 Sylvie Bergeron, of San Diego, at left, and her sister Line Bergeron, of Quebec, walk with their dogs next to tuna crabs that washed up onto the beach at Shaw's Cove on Friday, May 13, 2016 in Laguna Beach, Calif. (Photo by Kevin Sullivan/The Orange County Register via AP Photo) 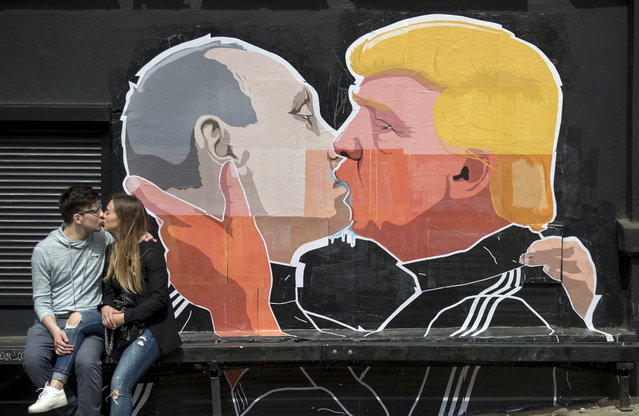 A couple kisses in front of graffiti depicting Russian President Vladimir Putin, left, and Republican presidential candidate Donald Trump, on the walls of a bar in the old town in Vilnius, Lithuania, Saturday, May 14, 2016. (Photo by Mindaugas Kulbis/AP Photo) 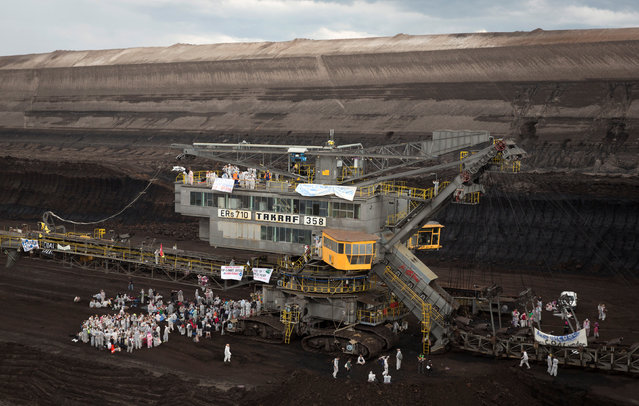 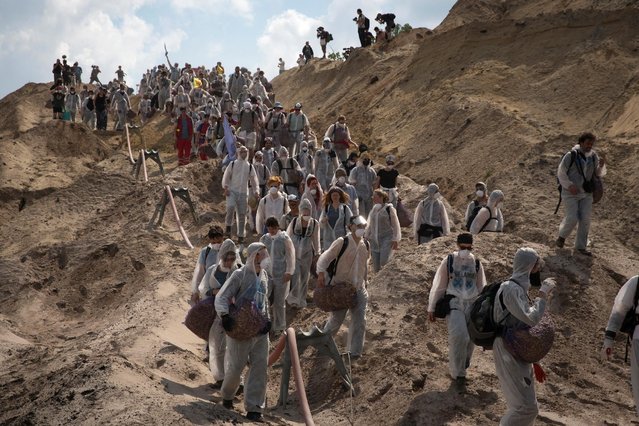 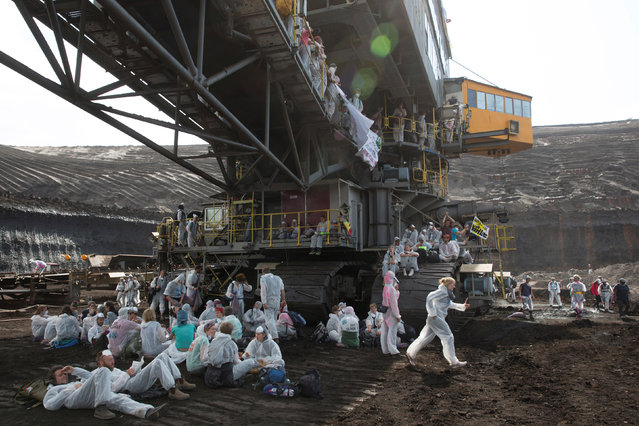 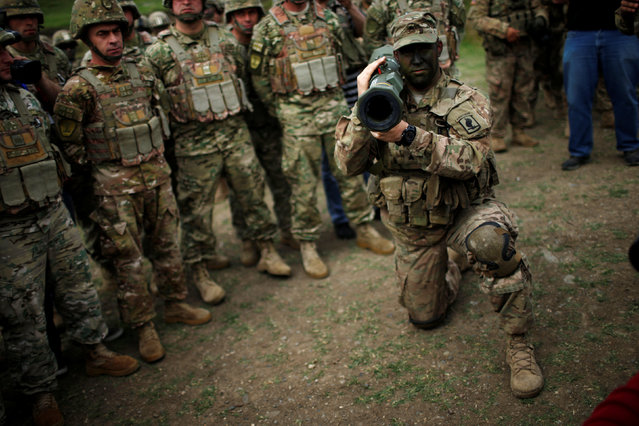 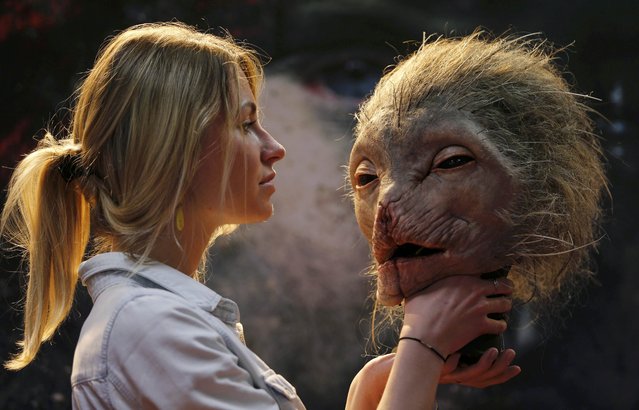 A representative of Makinarium production, specialized in special visual effects, displays a latex mask for horror movie on a stand inside the Festival Palace during the 69th Cannes Film Festival in Cannes, France, May 14, 2016. (Photo by Regis Duvignau/Reuters) 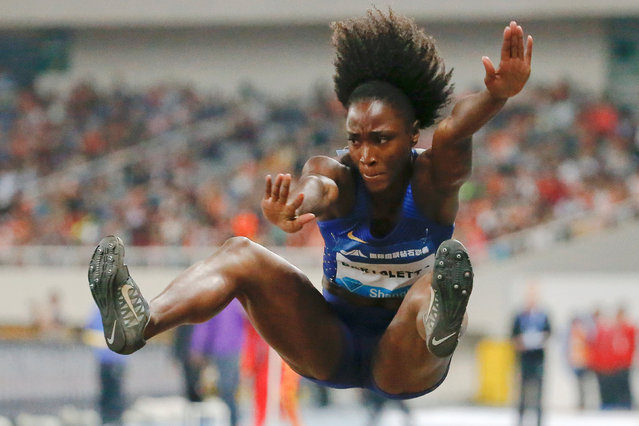 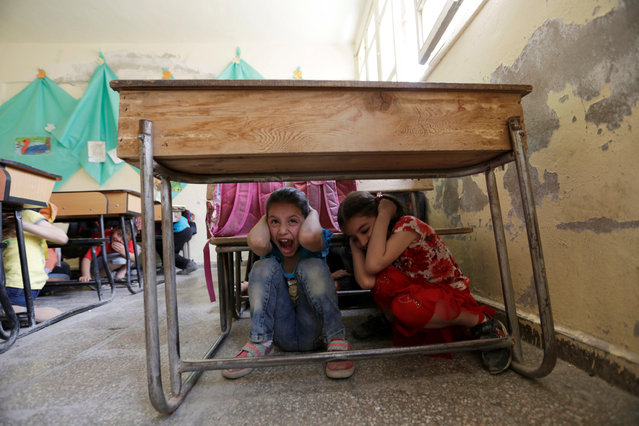 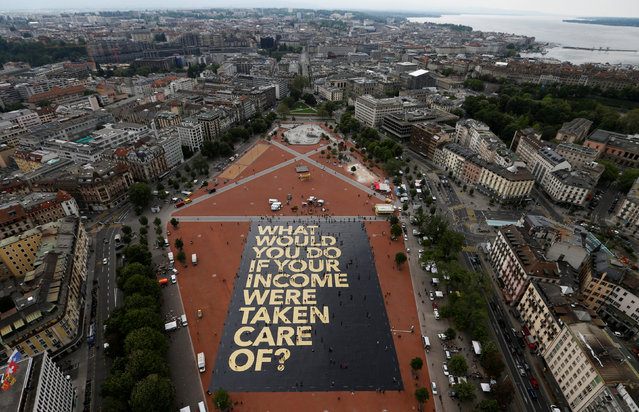 A 8,000 square meter poster is pictured on the Plainpalais square in Geneva, Switzerland May 14, 2016. The committee for the initiative for an “Unconditional Basic Income” has crowdfunded the “world's biggest poster”, posing the question “What would you do if your income were taken care of?". Swiss citizens will vote on June 5, 2016 on the proposal for an "Unconditional Basic Income”. (Photo by Denis Balibouse/Reuters) 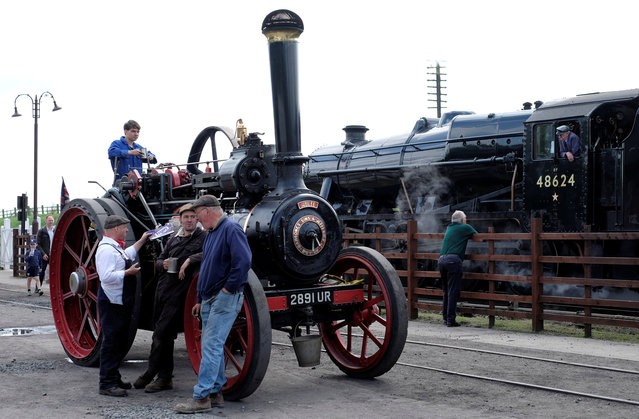 Men talk next to a steam train and a steam engine at a vintage rally, at the Great Central Railway Station in Quorn, Britain May 14, 2016. (Photo by Darren Staples/Reuters) 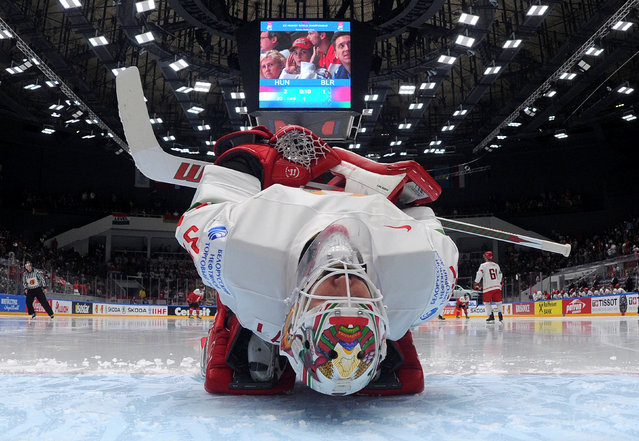 2016 IIHF World Championship, Group B, Hungary vs Belarus, St. Petersburg, Russia on May 14, 2016. Belarus' goalie Kevin Lalande warms up before the game with Hungary. (Photo by Yuri Kuzmin/Reuters) 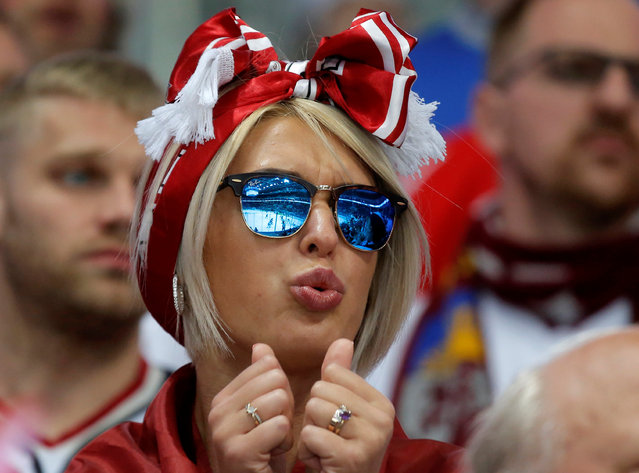 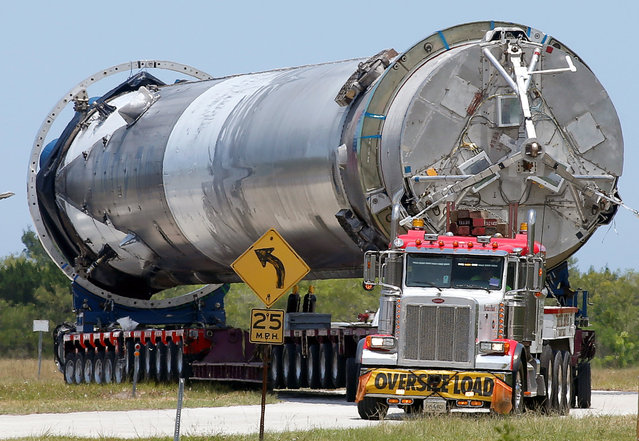 The recovered first stage of a SpaceX Falcon 9 rocket is transported to the SpaceX hangar at launch pad 39A at the Kennedy Space Center in Cape Canaveral, Florida May 14, 2016. The vehicle was launched on May 6 and returned to land a short time later aboard a barge in the Atlantic Ocean. (Photo by Joe Skipper/Reuters) 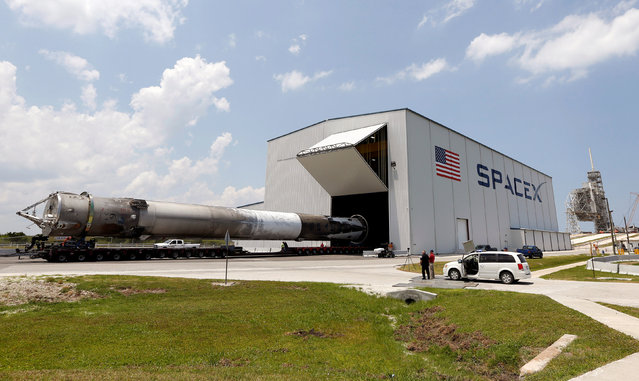 The recovered first stage of a SpaceX Falcon 9 rocket is transported to the SpaceX hangar at historic launch pad 39A at the Kennedy Space Center in Cape Canaveral, Florida May 14, 2016. (Photo by Joe Skipper/Reuters) 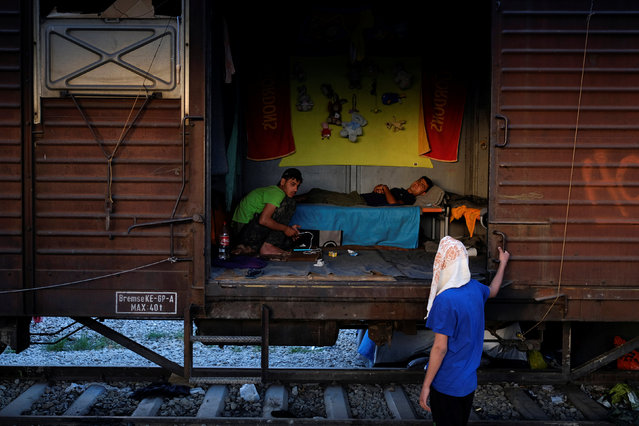 People talk to each other inside a train wagon at a makeshift camp for refugees and migrants at the Greek-Macedonian border near the village of Idomeni, Greece, May 14, 2016. (Photo by Marko Djurica/Reuters) 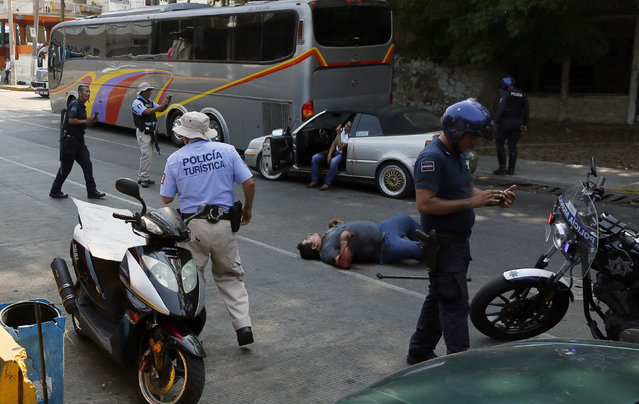 A wounded man lies on the ground and a second one sits in his car waiting for assistance as police arrive to the scene of a shooting near Caleta beach in Acapulco, Mexico, Friday, May 13, 2016. The city of Acapulco and Guerrero state in general have experienced a wave of violence attributed to warring drug gangs. On Saturday Mexican authorities say three men were gunned down, killing all three, in a tourist-hotel quarter of the Pacific resort city. (Photo by Enric Marti/AP Photo) 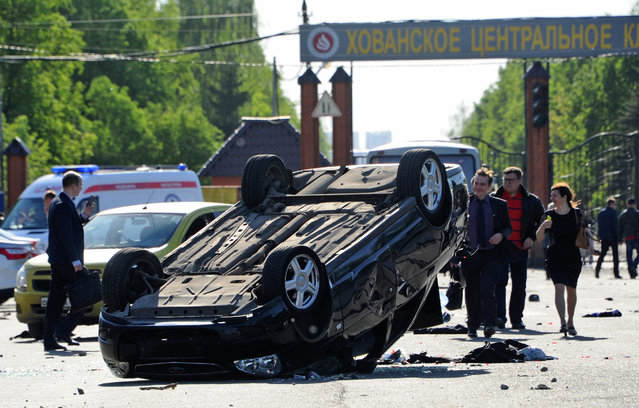 A car lays overturned after a mass brawl at the Khovanskoye cemetery in Moscow, Russia, 14 May 2016. At least two people were killed in a mass brawl at the cemetery in southwest Moscow, while 50 people were arrested, Russian police said. Several hundreds of migrants said of Central Asian and Caucasians ethnic groups took part in the brawl using shovels, baseball bats and even firearms, according to officials from Russian interior ministry. It is believed that the opposing ethnic groups tried to take under their control the cemetery service business. (Photo by Vladimir Velengurin/EPA/Komsomolskaya Pravda) 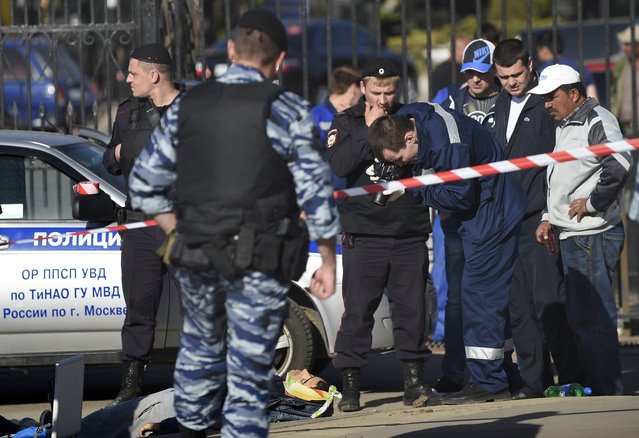 Police investigators work on the site of a brawl at the Khovanskoye cemetery in in Moscow, Russia, Saturday, May 14, 2016. Moscow police say a brawl at a cemetery involving up to 200 people has left two people dead and 10 wounded. Russian news reports cited police as saying the brawl was believed to have been about control over providing burial services at the sprawling Khovanskoye cemetery in southwest Moscow. (Photo by AP Photo) 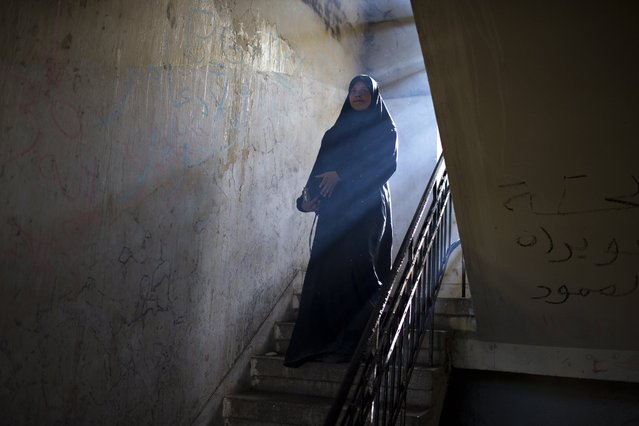 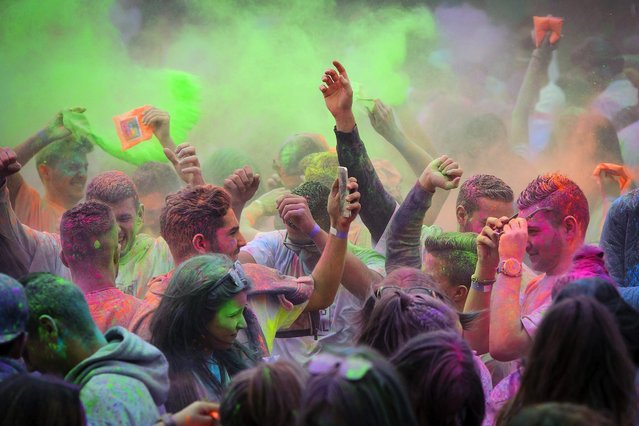 Participants throw colored powder onto each other during the Festival of Colors in Oradea, western Romania, 14 May 2016. (Photo by Zsolt Czegledi/EPA) 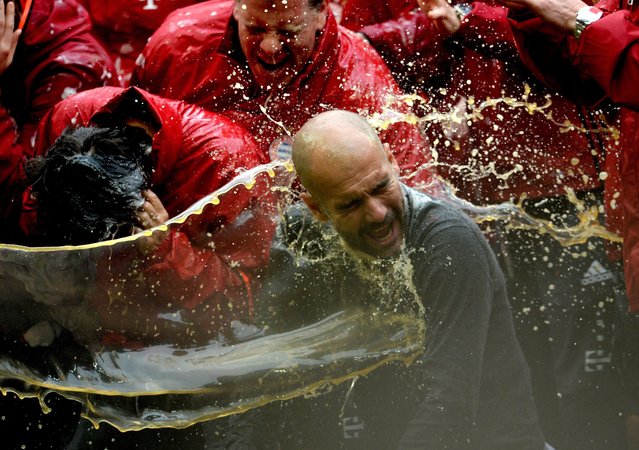 Munich coach Pep Guardiola gets showered in beer after the German Bundesliga soccer match between FC Bayern Munich and Hanover 96 at Allianz Arena in Munich, Germany, 14 May 2016. (Photo by Andreas Gebert/EPA) 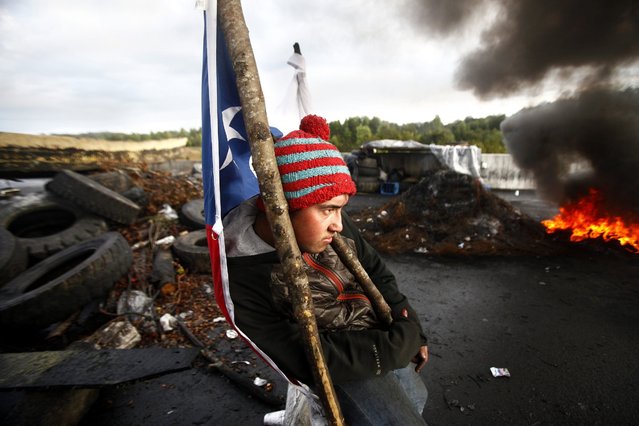 A Chilean fisherman participates in the blockade of route 5 south on the way to Maullin, the route leading to Chiloe island, south of Santiago, Chile, on 13 May 2016. Fishermen have been protesting because of a ban imposed on fishing in local waters due to the red tide phenomenon in the area. The red tide is caused by the excessive proliferation of microalgae with high concentrations of toxins, which can cause illness in humans and animals. (Photo by Sebastian Silva/EPA) 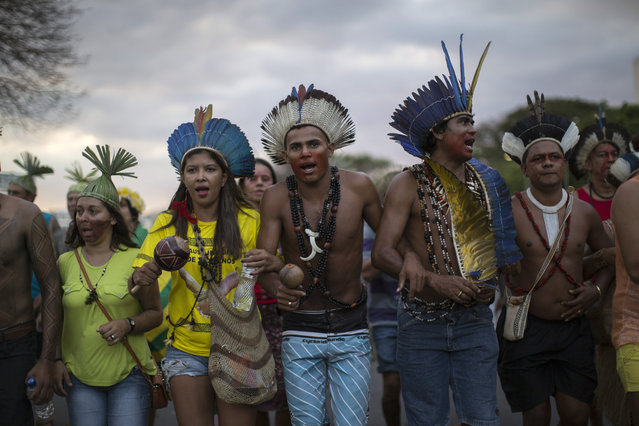 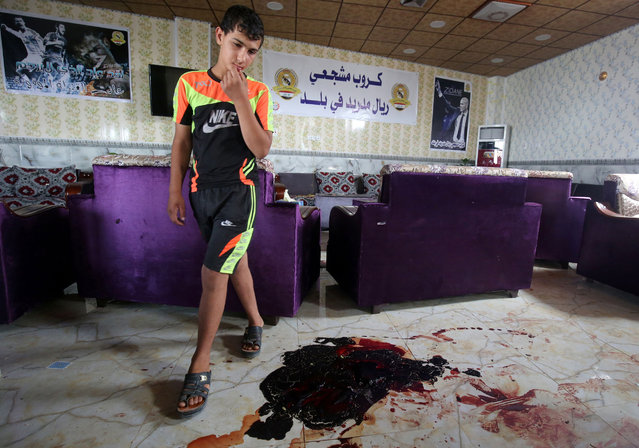 An Iraqi boy walks past the blood stains and debris at a cafe, that was popular with local fans of Spain's Real Madrid football club, in the Balad area, north of the capital Baghdad, on May 14, 2016, a day after a deadly raid claimed by Islamic State group militants. At least 16 people were killed and 30 wounded, including several members of the security forces, in the attack in the town of Balad and the ensuing chase, officials said. (Photo by Ahmad Al-Rubaye/AFP Photo) 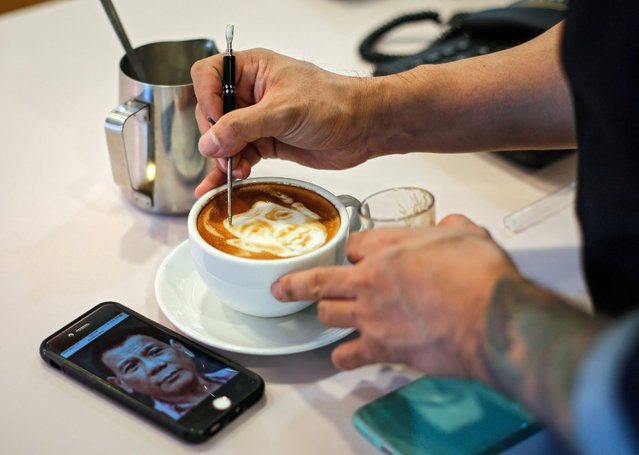 Filipino graphic artist and barista Zach Yonzon, applies finishing touches to the face of Philippine President-elect Rodrigo Duterte on a coffee latte called 'Latte Duterte' inside his cafe and cake studio in Quezon city, northeast of Manila, Philippines, 14 May 2016. Yonzon, admittedly said he did not vote for Duterte, but for Senator Mirriam Santiago. Yonzon draws different faces on top of a coffee lattes upon costumers’ requests. Duterte, the presumptive President-elect will make his first public appearance on 16 May, his spokesperson said. (Photo by Mark R. Cristino/EPA) 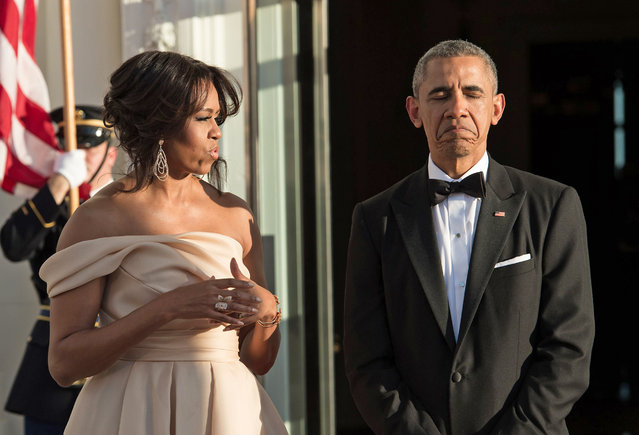