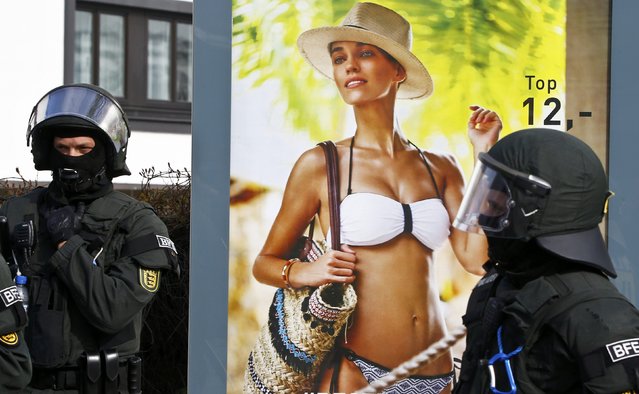 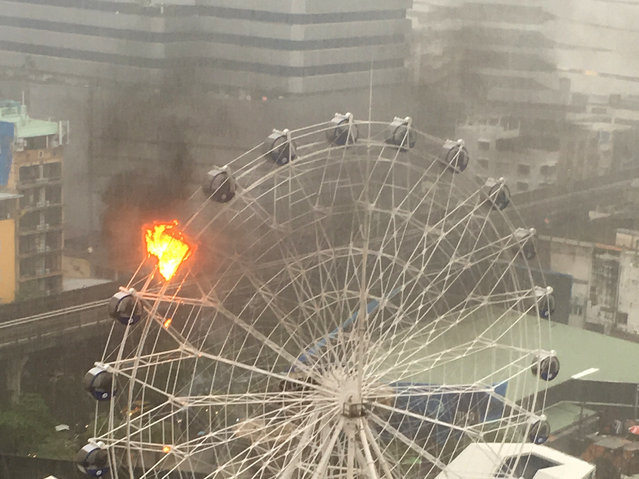 An empty passenger car of a Ferris wheel burns at a newly opened dinosaur theme park in central Bangkok, Thailand, Saturday, April 30, 2016. There were no reports of injuries and the cause of the fire, which was out largely because of a torrential downpour, is not known. (Photo by Shilpa Ko via AP Photo) 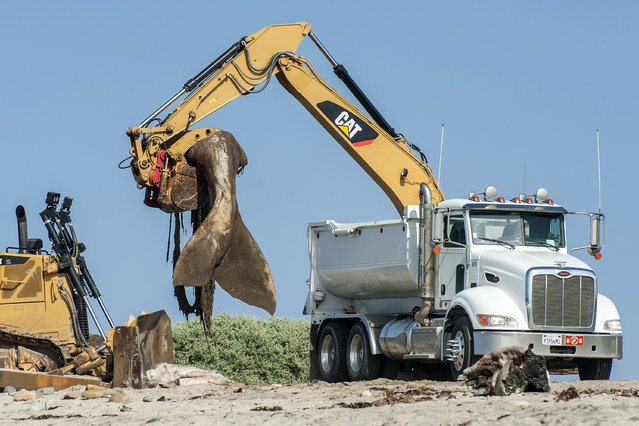 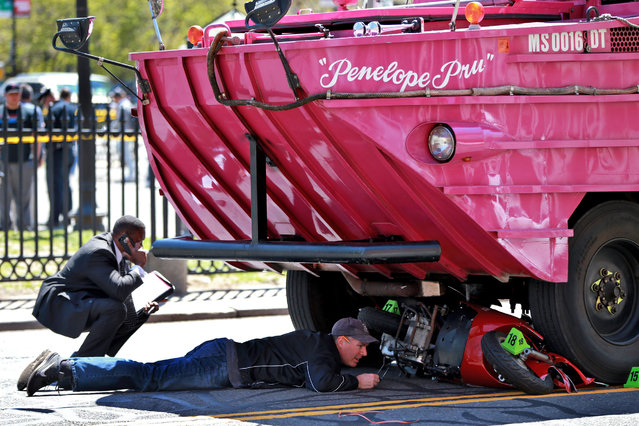 Investigators work the scene of an accident involving a Duck Boat on Saturday, April 30, 2016 in Boston. A woman has died after the scooter she was driving was struck by an amphibious sightseeing vehicle in downtown Boston. A city police department spokeswoman said the woman and her male passenger were taken to Massachusetts General Hospital, where the woman died from her injuries. The passenger suffered non-life threatening injuries. (Photo by Jonathan Wiggs/The Boston Globe via AP Photo) 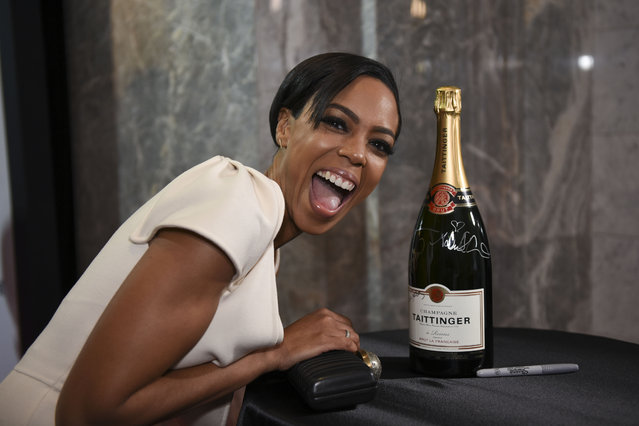 Actress Jazmyn Simon, of HBO's Ballers, poses with a magnum of Champagne Taittinger for the SAG/AFTRA Foundation, during the Celebrate Journalists event at the Washington Post Headquarters on Friday, April 29, 2016, in D.C. The event kicked off festivities for the 102nd White House Correspondents' Dinner. (Photo by Kevin Wolf/Invision for Taittinger/AP Images) 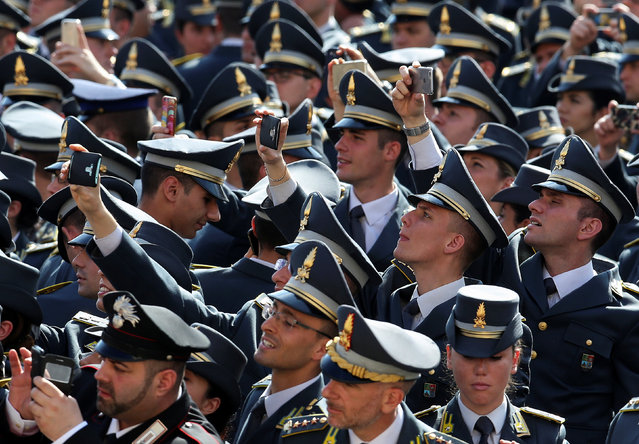 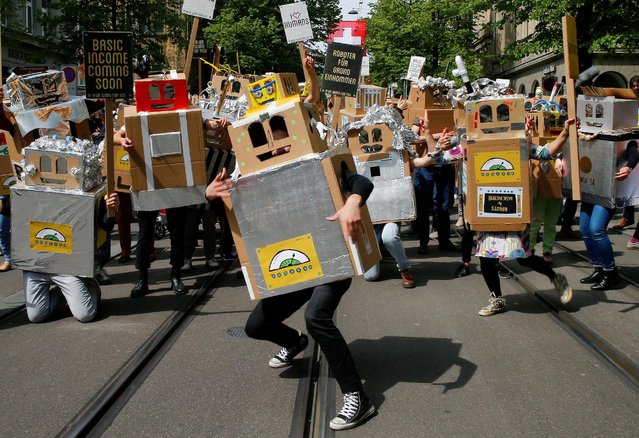 Protesters dressed as robots demand a basic income for everyone during a demonstration at the Bahnhofstrasse in Zurich, Switzerland April 30, 2016. (Photo by Arnd Wiegmann/Reuters) 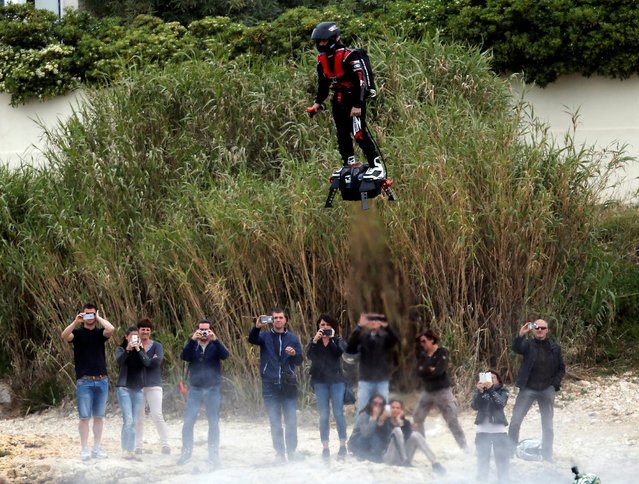 Pilot and jet-ski champion Franky Zapata breaks the Guiness World Records of the farthest flight by hoverboard with the IPU Flyboard Air after covering a distance of 2,252.4 meters (7,389.76 ft) with an average speed of 50-60km/h in Sausset les Pins near Marseille, France, April 30, 2016. (Photo by Jean-Paul Pelissier/Reuters) 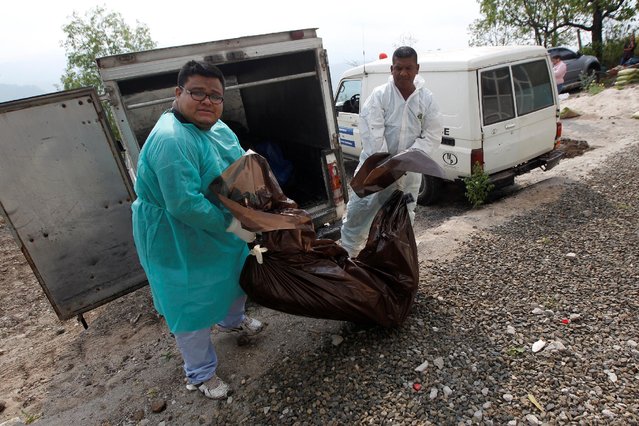 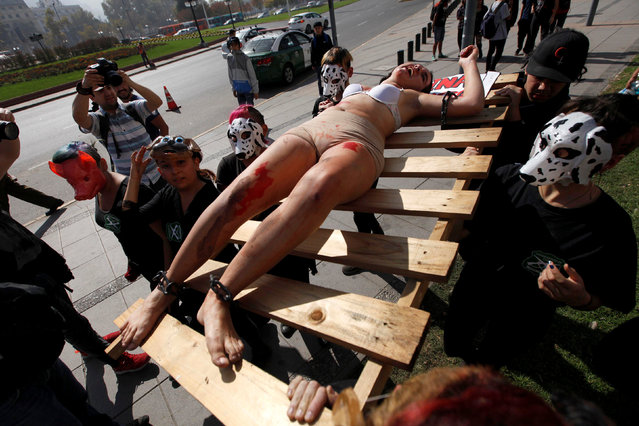 A demonstrator is carried during a rally in support of a identity check draft law and against delinquency, in Santiago, Chile April 30, 2016. (Photo by Carlos Vera/Reuters) 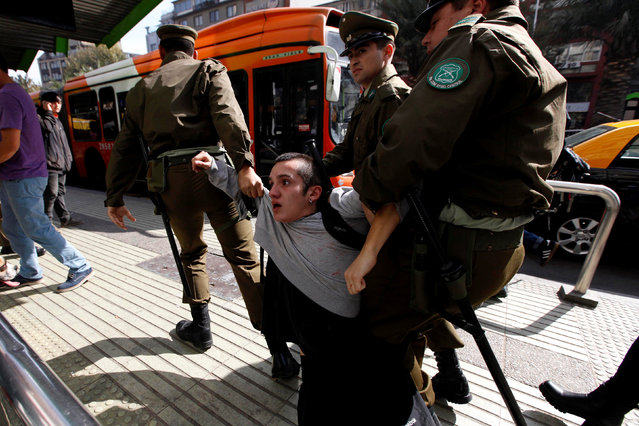 A demonstrator is detained during a rally in support of an identity check draft law and against delinquency, in Santiago, Chile April 30, 2016. (Photo by Carlos Vera/Reuters)

Competitors in the Conch Republic Bed Race roll up Duval Street in Key West, Florida April 30, 2016. The event, billed as the most fun you can have in bed with your clothes on, was a facet of the island city's annual Conch Republic Independence Celebration that commemorates a 1982 “secession” from the United States after the U.S. Border Patrol established a checkpoint at the top of the Florida Keys Overseas Highway. (Photo by Rob O'Neal/Reuters/Courtesy of Florida Keys News Bureau) 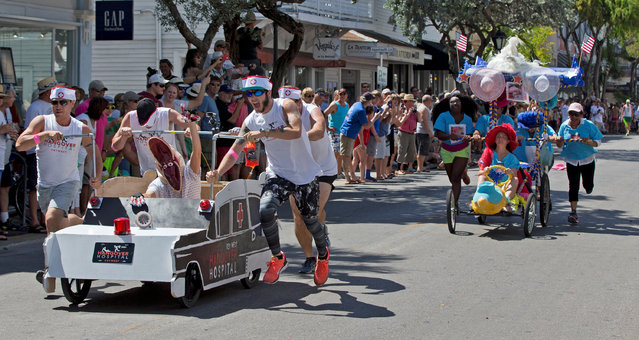 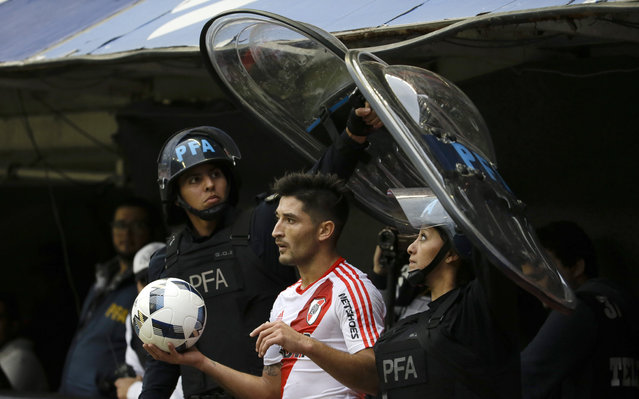 Milton Casco of River Plate is protected by police as he gets ready for a throw-in during a Argentina league soccer match against Boca Juniors in Buenos Aires, Argentina, Sunday, April 24, 2016. (Photo by Natacha Pisarenko/AP Photo) 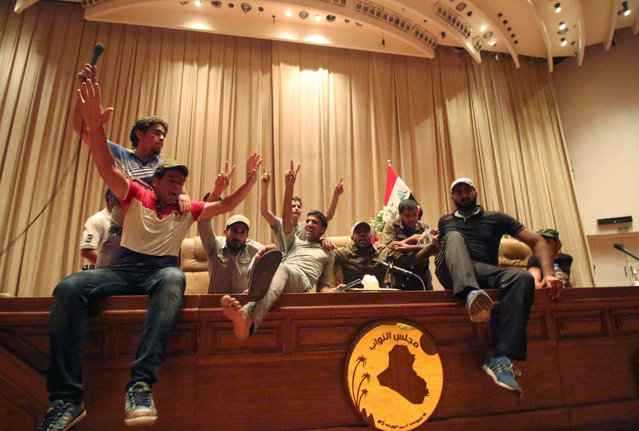 Iraqi protesters flash the V-sign as they gather inside the parliament after breaking into Baghdad's heavily fortified “Green Zone” on April 30, 2016. A protest held outside the Green Zone escalated after parliament again failed to reach a quorum and approve new ministers to replace the current government of party-affiliated ministers. (Photo by Haidar Mohammed Ali/AFP Photo) 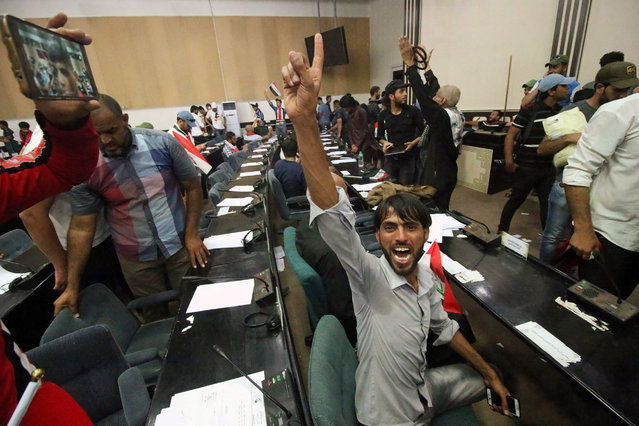 Iraqi protesters shout slogans as they sit inside the parliament after breaking into Baghdad's heavily fortified “Green Zone” on April 30, 2016. (Photo by Haidar Mohammed Ali/AFP Photo) 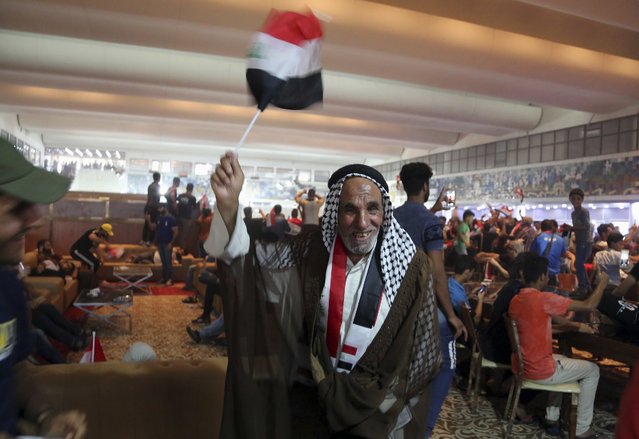 A man waves a national flag as supporters of Shiite cleric Muqtada al-Sadr storm parliament in Baghdad's Green Zone, Saturday, April 30, 2016. Dozens of protesters climbed over the blast walls and could be seen storming the Parliament building, carrying Iraqi flags and chanting against the government. (Photo by Karim Kadim/AP Photo) 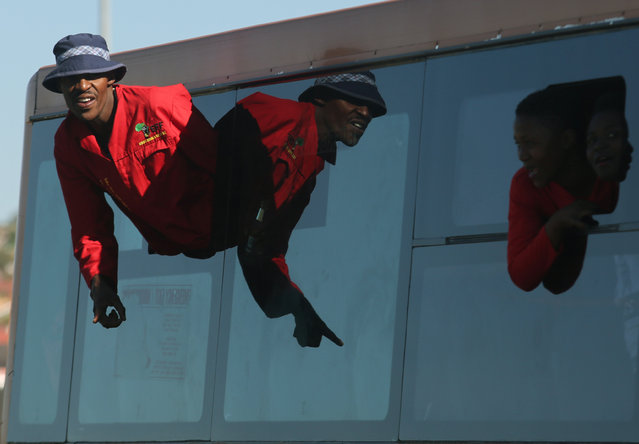 Members of the Economic Freedom Fighters (EFF) party arrive by bus for the launch of their municipal election manifesto, in Soweto, South Africa, Saturday, April 30, 2016. Fiery South African opposition politician Julius Malema told 40,000 cheering supporters that President Jacob Zuma should step down before the army turns on him because of the corruption allegations against him.(Photo by Denis Farrell/AP Photo) 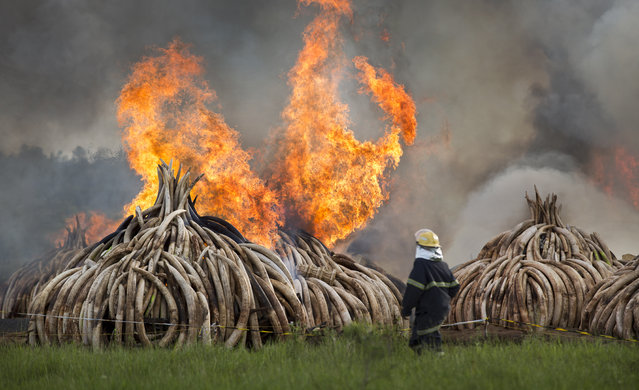 A fireman walks past as pyres of ivory are set on fire in Nairobi National Park, Kenya Saturday, April 30, 2016. Kenya's president Saturday set fire to 105 tons of elephant ivory and more than 1 ton of rhino horn, believed to be the largest stockpile ever destroyed, in a dramatic statement against the trade in ivory and products from endangered species. (Photo by Ben Curtis/AP Photo) 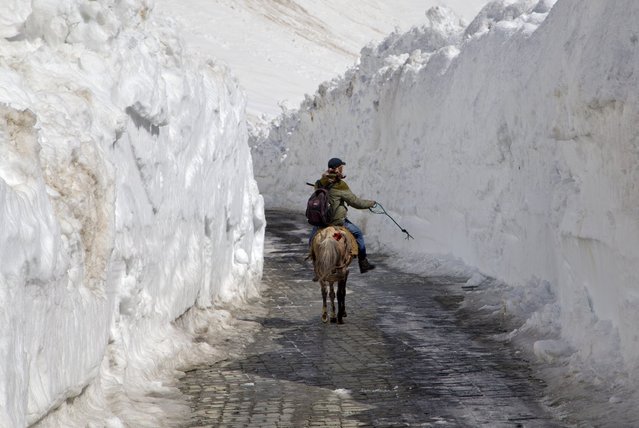 A Kashmiri man on a horse rides past walls of snow on the Zojila Pass, about 110 kilometers (68 miles) north of Srinagar, Indian controlled Kashmir, Saturday, April 30, 2016. The Srinagar-Leh national highway connecting Ladakh to the Kashmir Valley was re-opened to traffic Saturday after remaining closed for nearly six months. The highway passes through the high altitude Zojila Pass of the Himalayan range. (Photo by Dar Yasin/AP Photo) 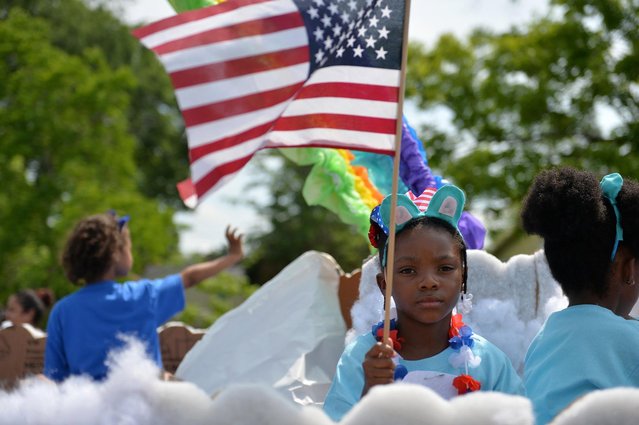 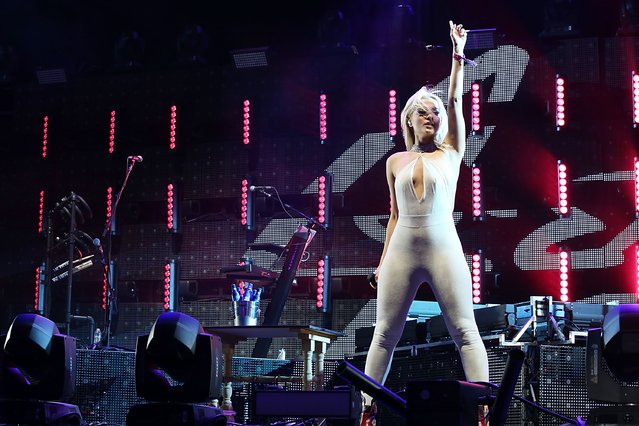 Bebe Rexha performs onstage at Stagecoach 2016 during a Bud Light Music Stage Moment at The Empire Polo Club on April 29, 2016 in Indio, California. (Photo by Joe Scarnici/Getty Images for Anheuser-Busch) 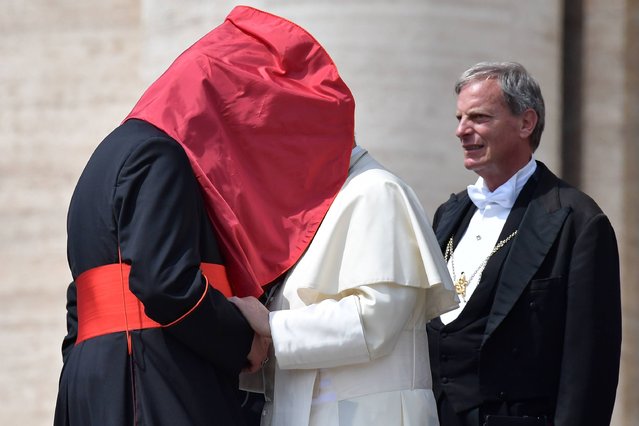 A gust of wind lifts the mantilla of an unidentified cardinal as he shakes hands with Pope Francis at the end of an audience as part of the Jubilee Year of Mercy on April 30, 2016 at St Peter's square in Vatican. (Photo by Tiziana Fabi/AFP Photo)
Edit Del
01 May 2016 11:37:00, post received 0 comments
Publication archive:
←   →
Popular tags:
All tags
Last searches: