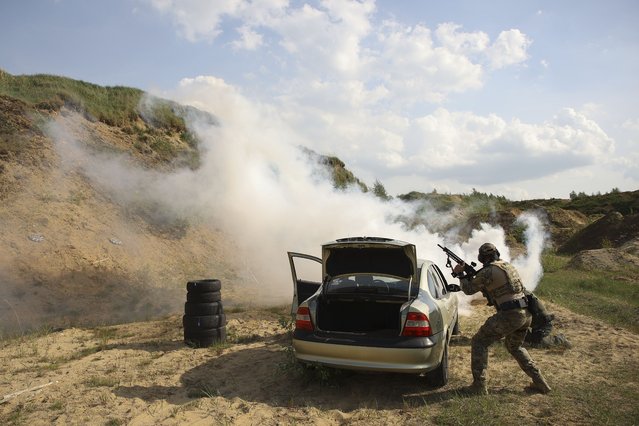 Volunteers from Belarus practice at a shooting range near Warsaw, Poland, on Friday, May 20, 2022. Belarusians are among the foreign fighters who have volunteered to take up arms in Ukraine against Russian forces. They consider the Ukrainians defending their homeland to be their brethren. And by joining their resistance to Russia's onslaught, they hope to weaken the rule of Russian President Vladimir Putin, and ultimately that of Belarus President Alexander Lukashenko. (Photo by Michal Dyjuk/AP Photo) 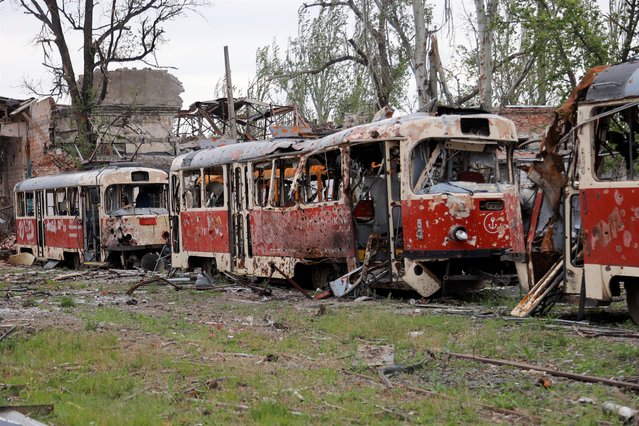 Destroyed trams stand in a depot in Mariupol, in territory under the government of the Donetsk People's Republic, eastern Ukraine, Saturday, May 21, 2022. (Photo by Alexei Alexandrov/AP Photo) 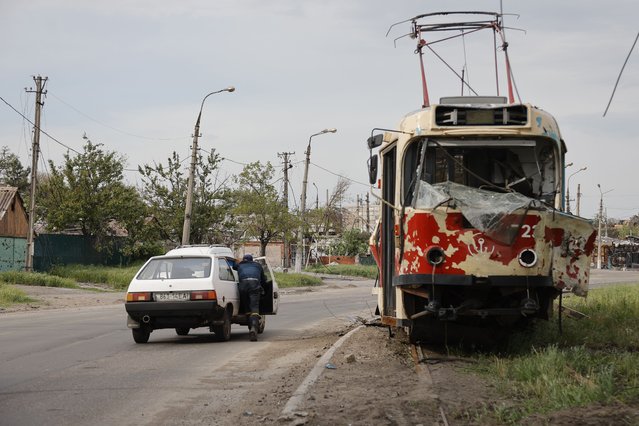 A man pushes a stalled car past a damaged tram in Mariupol, in territory under the government of the Donetsk People's Republic, eastern Ukraine, Saturday, May 21, 2022. (Photo by Alexei Alexandrov/AP Photo) 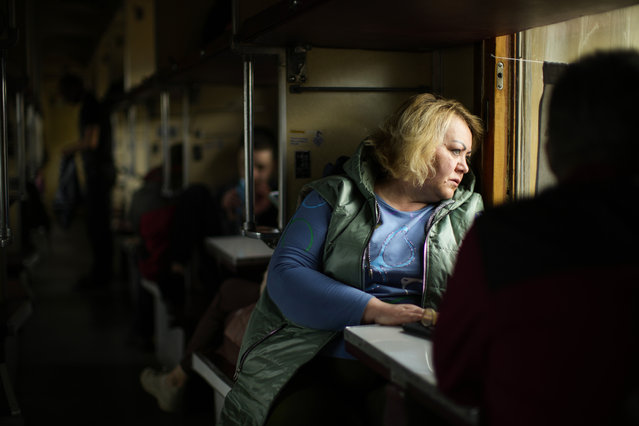 People fleeing from heavy shelling board an evacuation train at Pokrovsk train station, in Pokrovsk, eastern Ukraine, Sunday, May 22, 2022. Civilians fleeing areas near the eastern front in the war in Ukraine Sunday described scenes of devastation as their towns and villages came under sustained attack from Russian forces. (Photo by Francisco Seco/AP Photo) 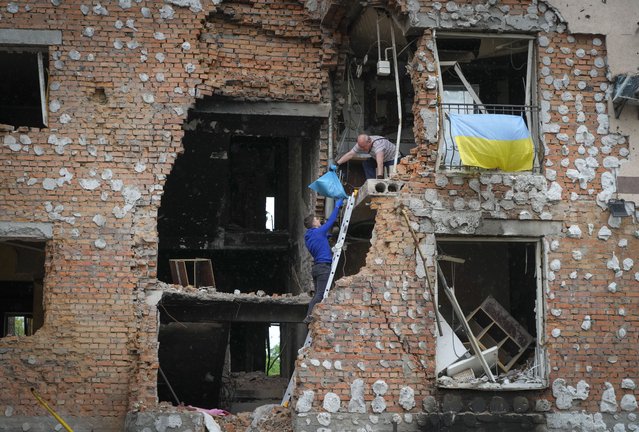 Residents take out their belongings from their house ruined by the Russian shelling in Irpin close to Kyiv, Ukraine, Saturday, May 21, 2022. (Photo by Efrem Lukatsky/AP Photo) 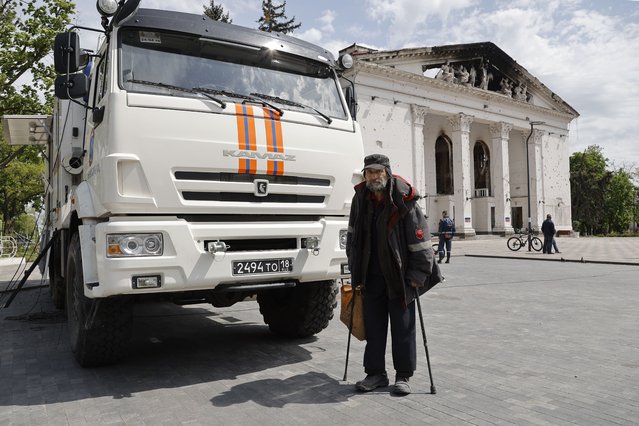 A man walks next to a theater building that has been bombed, in Mariupol, in territory under the government of the Donetsk People's Republic, eastern Ukraine, Saturday, May 21, 2022. (Photo by Alexei Alexandrov/AP Photo) 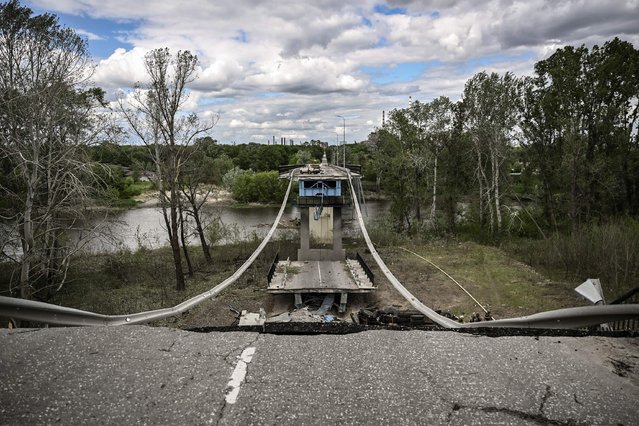 A picture taken on May 22, 2022, shows the destroyed bridge connecting the city of Lysychansk with the city of Severodonetsk in the eastern Ukranian region of Donbass, amid Russian invasion of Ukraine. (Photo by Aris Messinis/AFP Photo) 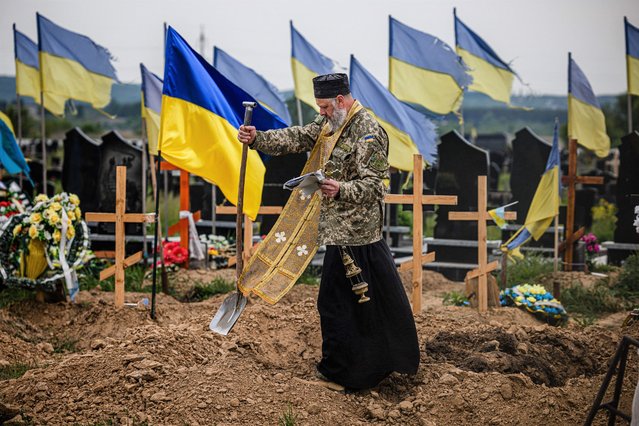 A military chaplain leads a funeral service for Ukrainian servicemen Sergeii Profotilov and Igor Malenkov, both killed in the village of Vilkhivka during the Russian invasion of Ukraine, in the military section of the Kharkiv cemetery number 18 in Bezlioudivka, eastern Ukraine on May 21, 2022. (Photo by Dimitar Dilkoff/AFP Photo) 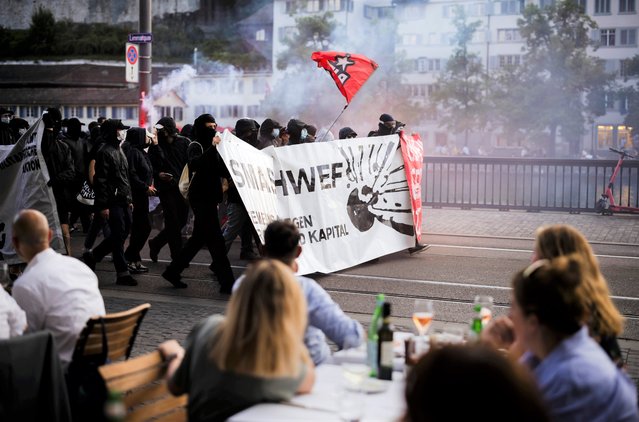 Protesters walk with banners reading “Smash WEF” past people sitting in a restraurant during a demonstration against the World Economic Forum (WEF) in Zurich, Switzerland, Friday, May 20, 2022. The World Economic Forum Annual Meeting will take place from May 22-26, in Davos. (Photo by Michael Buholzer/Keystone via AP Photo) 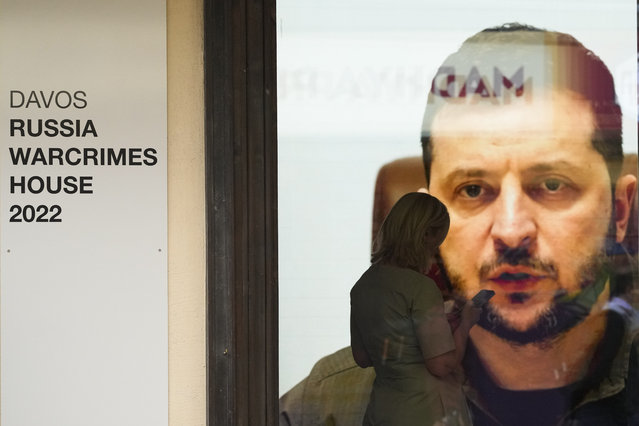 Ukrainian President Volodymyr Zelenskyy speaks on a screen inside a so-called Russian War Crimes House alongside the World Economy Forum in Davos, Switzerland, Sunday, May 22, 2022. (Photo by Markus Schreiber/AP Photo) 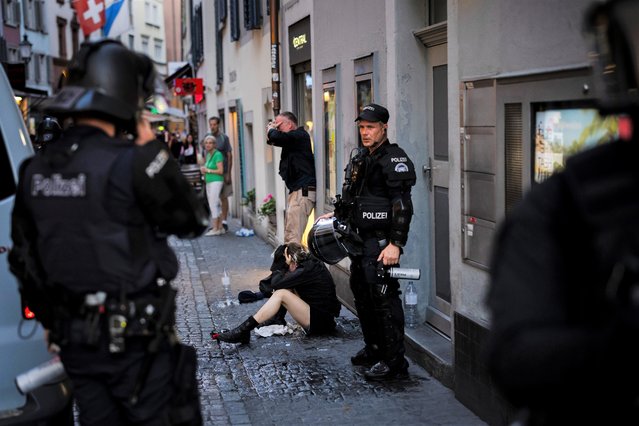 An injured young woman, center, is held by police officers next to an injured police officer in plain clothes, center back, after the police used pepper spray and rubber bullets against protesters during a demonstration against the World Economic Forum (WEF) in Zurich, Switzerland, Friday, May 20, 2022. (Photo by Michael Buholzer/Keystone via AP Photo) 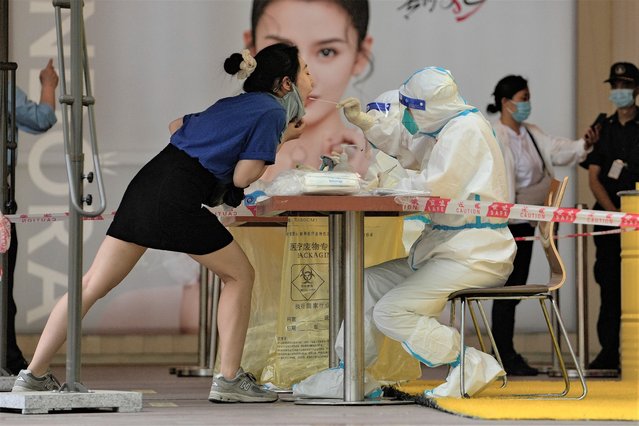 A woman gets a throat swab during a public COVID testing outside a shopping mall on Sunday, May 22, 2022, in Beijing. (Photo by Andy Wong/AP Photo) 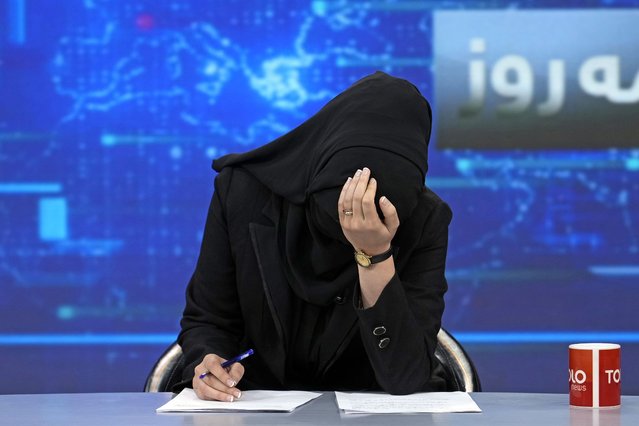 TV anchor Khatereh Ahmadi bows her head while wearing a face covering as she reads the news on TOLO NEWS, in Kabul, Afghanistan, Sunday, May 22, 2022. Afghanistan's Taliban rulers have begun enforcing an order requiring all female TV news anchors in the country to cover their faces while on-air. The move Sunday is part of a hard-line shift drawing condemnation from rights activists. (Photo by Ebrahim Noroozi/AP Photo) 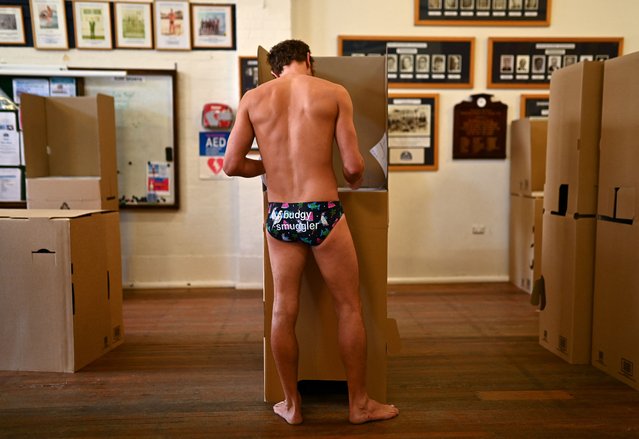 A man casts his vote during Australia's general election at a polling station at Bondi Beach in Sydney on May 21, 2022. (Photo by Steven Saphore/AFP Photo) 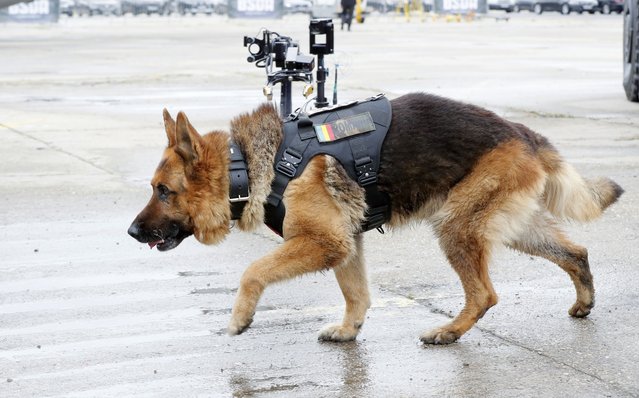 Explosives sniffing dog named Dino prepares to check a Romanian Army stand during the first day of the Black Sea Defense & Aerospace Exhibition 2022 (BSDA) in Bucharest, Romania, 18 May 2022. More than 380 companies from the fields of defense, security and aerospace from 32 countries display products and equipment during the BSDA 2022, one of the largest defense bi-annual exhibitions held in Eastern Europe. (Photo by Robert Ghement/EPA/EFE) 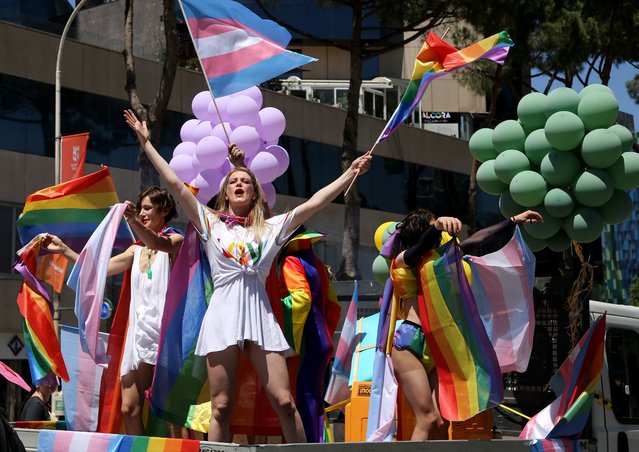 Albanian LGBT activists wave flags as they attend Tirana Gay Pride to mark the International Day Against Homophobia, Transphobia and Biphobia in Tirana on May 21, 2022. Only in recent years has the LGBT community in Albania emerged from marginalized and underground activities to hold public events and parades, although not entirely without causing controversy and prejudice in this small Balkan nation which until the collapse of the communist regime in 1990 penalized homosexuality. (Photo by Gent Shkullaku/AFP Photo) 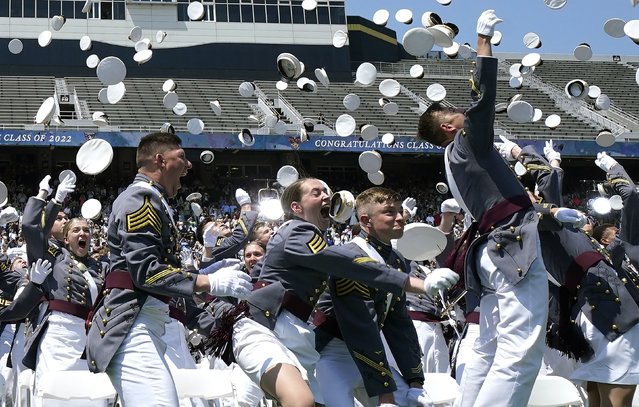 Class of 2022 cadets celebrate their graduation during commencement ceremonies at the US Military Academy West Point, on May 21, 2022, in New York. Graduating cadets will be commissioned as second lieutenants in the US Army. (Photo by Timothy A. Clary/AFP Photo) 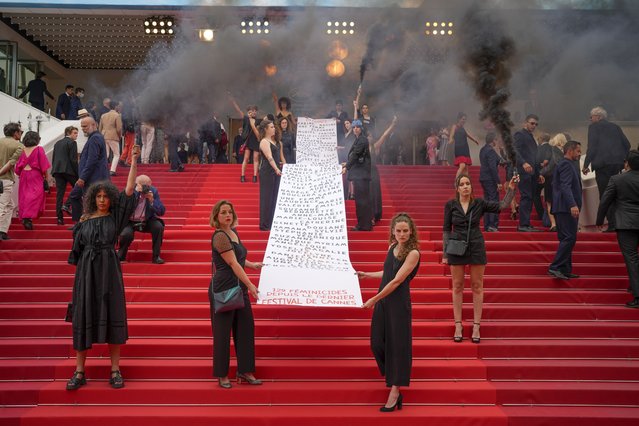 A banner is unveiled with a list of names and that reads at the end “129 feminicides since the last Cannes festival” at the premiere of the film “Holy Spider” at the 75th international film festival, Cannes, southern France, Sunday, May 22, 2022. (Photo by Petros Giannakouris/AP Photo) 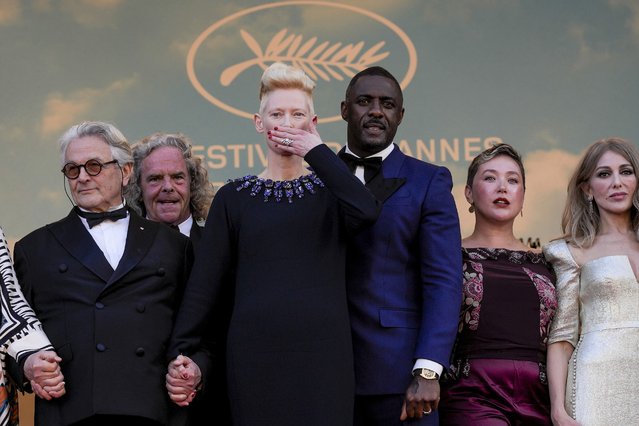 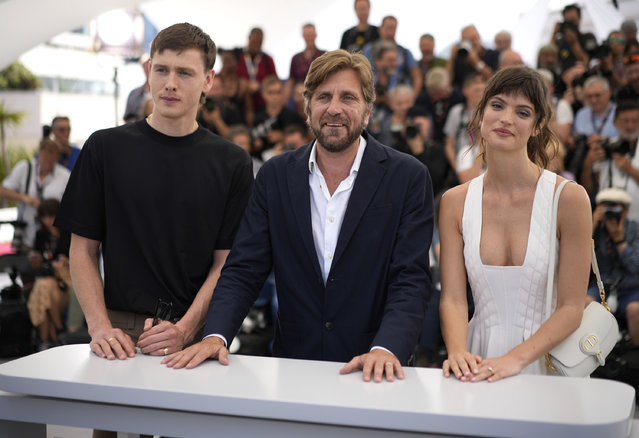 Harris Dickinson, from left, director Ruben Ostlund, and Charlbi Dean pose for photographers at the photo call for the film “Triangle of Sadness” at the 75th international film festival, Cannes, southern France, Sunday, May 22, 2022. (Photo by Daniel Cole/AP Photo) 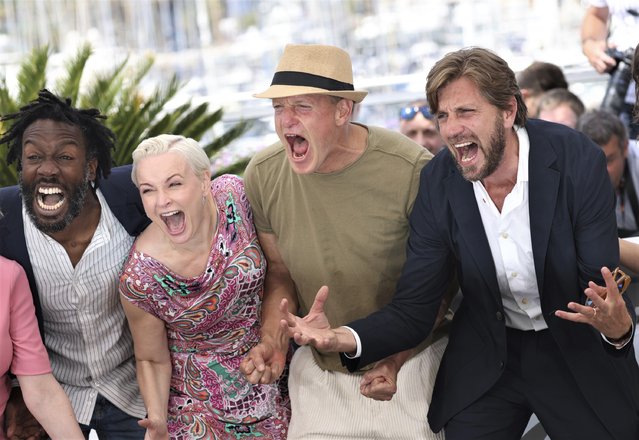