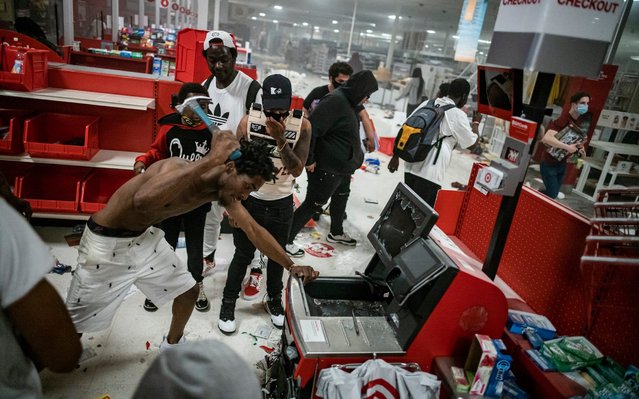 In this Wednesday, May 27, 2020 photo, a looter uses a claw hammer as he tries to break in to a cash register at a Target store in Minneapolis. Rioters ignited fires and looted stores all over the city, as peaceful protests turned increasingly violent in the aftermath of the death of George Floyd. (Photo by Richard Tsong-Taatarii/Star Tribune via AP Photo) 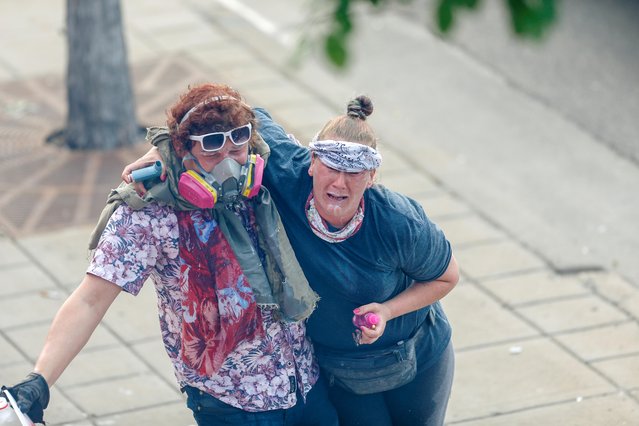 A woman holds her inhaler and leans on another person after being sprayed with mace by police officers during a protest near the Minneapolis Police third precinct after a white police officer was caught on a bystander's video pressing his knee into the neck of African-American man George Floyd, who later died at a hospital, in Minneapolis, Minnesota, U.S. May 27, 2020. (Photo by Eric Miller/Reuters) 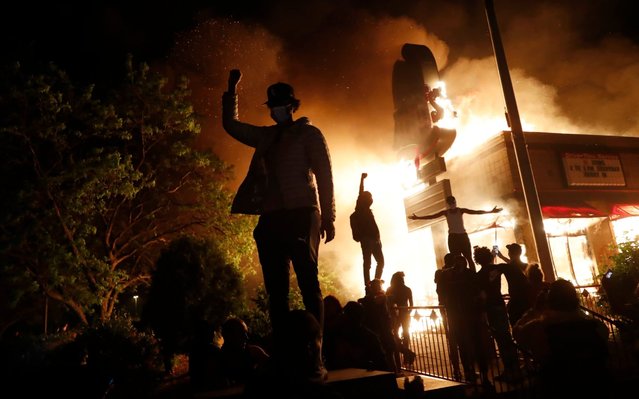 Protestors demonstrate outside of a burning fast food restaurant, Friday, May 29, 2020, in Minneapolis. Protests over the death of George Floyd, a black man who died in police custody Monday, broke out in Minneapolis for a third straight night. (Photo by John Minchillo/AP Photo) 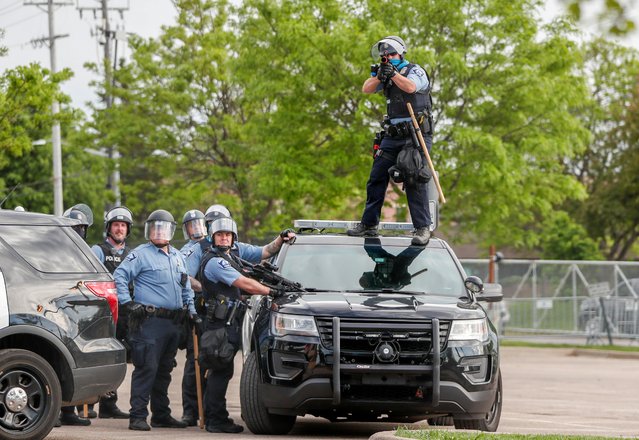 A police officer aims before firing at protesters gathered near the Minneapolis Police third precinct after a white police officer was caught on a bystander's video pressing his knee into the neck of African-American man George Floyd, who later died at a hospital, in Minneapolis, Minnesota, U.S. May 27, 2020. (Photo by Eric Miller/Reuters) 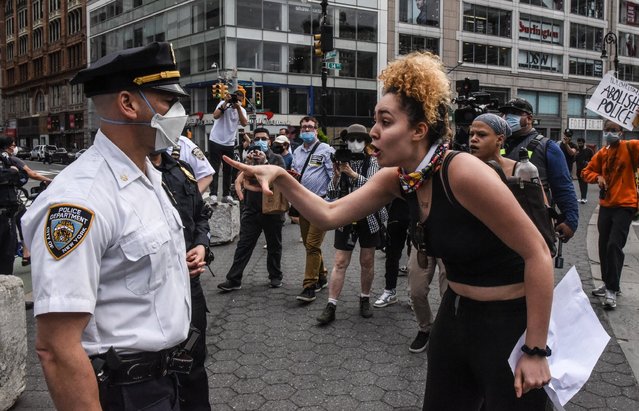 Protesters clash with police during a rally against the death of Minneapolis, Minnesota man George Floyd at the hands of police on May 28, 2020 in Union Square in New York City. Floyd's death was captured in video that went viral of the incident. Minnesota Gov. Tim Walz called in the National Guard today as looting broke out in St. Paul. (Photo by Stephanie Keith/Getty Images) 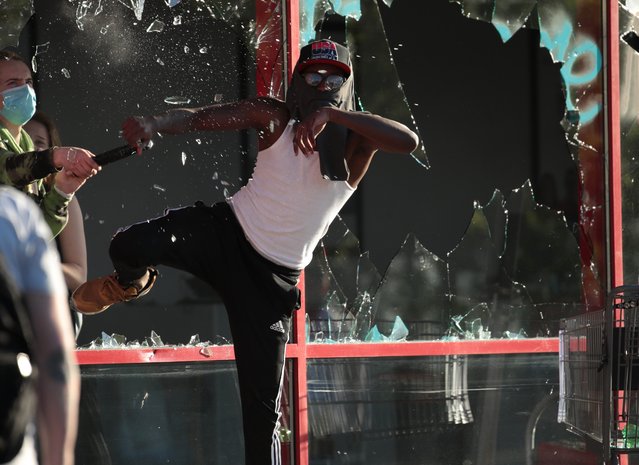 A man kicks out a store front window during a protest on May 28, 2020 in St. Paul, Minnesota. Today marks the third day of ongoing protests after the police killing of George Floyd. Four Minneapolis police officers have been fired after a video taken by a bystander was posted on social media showing Floyd's neck being pinned to the ground by an officer as he repeatedly said, “I can’t breathe”. Floyd was later pronounced dead while in police custody after being transported to Hennepin County Medical Center. (Photo by Scott Olson/Getty Images) 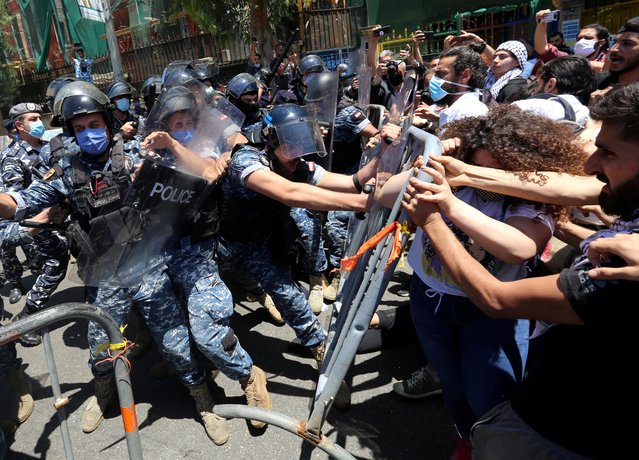 Demonstrators confront with riot police as they try to cross barricades on a road leading to the UNESCO Palace where Lebanon's parliament is holding a legislative session, during a protest against a controversial amnesty draft law, in Beirut Lebanon on May 28, 2020. (Photo by Aziz Taher/Reuters) 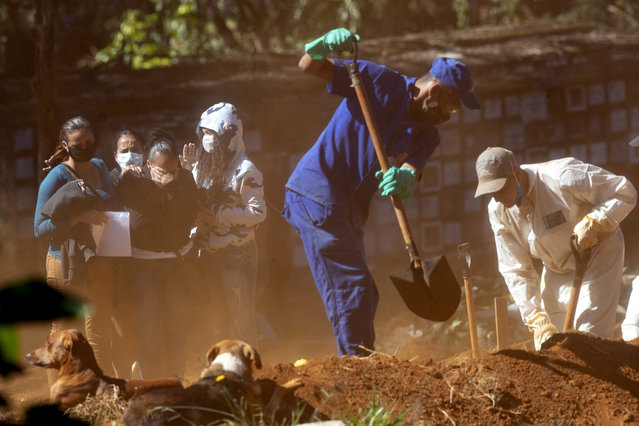 Relatives mourn as they watch cemetery workers shovel dirt over the coffin of 73-year-old Iziquiel Sampaio de Souza, who died of COVID-19, at the Vila Formosa cemetery in Sao Paulo, Brazil, Thursday, May 28, 2020. (Photo by Andre Penner/AP Photo) 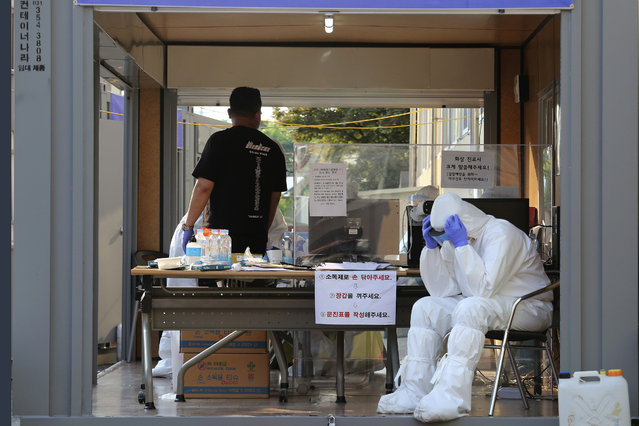 A health official wearing protective gear takes a rest during the COVID-19 testing at a public health center in Goyang, South Korea, Thursday, May 28, 2020. South Korea on Thursday reported its biggest jump in coronavirus cases in more than 50 days, a setback that could erase some of the hard-won gains that have made it a model for the rest of the world. (Photo by Ahn Young-joon/AP Photo) 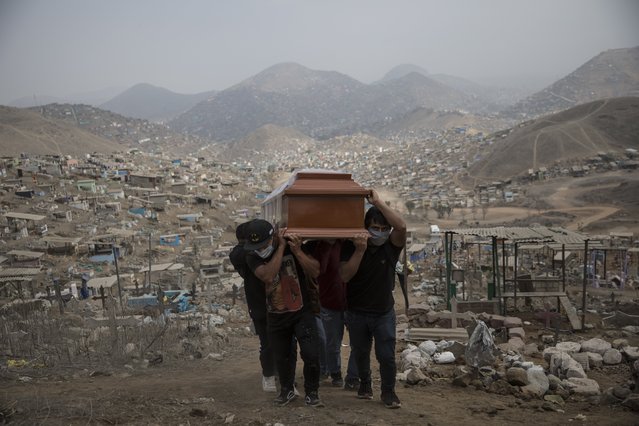 Relatives carry the coffin of a suspected COVID-19 victim at the Nueva Esperanza cemetery on the outskirts of Lima, Peru, Thursday, May 28, 2020. (Photo by Rodrigo Abd/AP Photo)

Russian Emergency Situations Ministry employees carry out disinfection of Kazansky Railway Station in Moscow, Russia on May 28, 2020, amid the ongoing COVID-19 pandemic. (Photo by Anton Novoderezhkin/TASS) 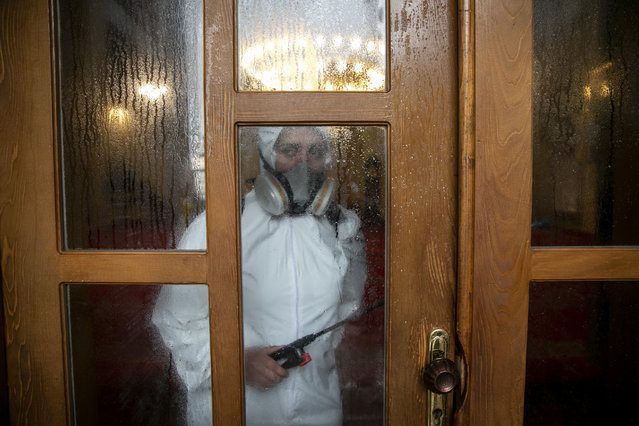 Disinfection team disinfect the premises of the grand mosque in capital Pristina, Kosovo on Thursday, May 28, 2020. Kosovo's mosques reopened on Thursday after more than two months of the virus lockdown. (Photo by Visar Kryeziu/AP Photo) 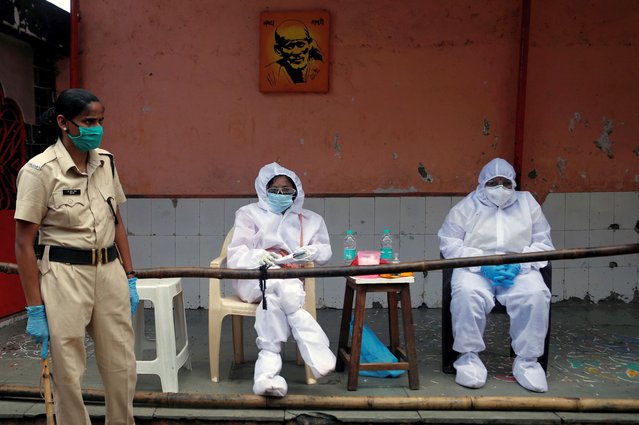 Healthcare workers wait next to a temple, to test residents of Dharavi, one of Asia's largest slums, during an extended lockdown to slow the spread of the coronavirus disease (COVID-19), in Mumbai, India, May 28, 2020. (Photo by Francis Mascarenhas/Reuters) 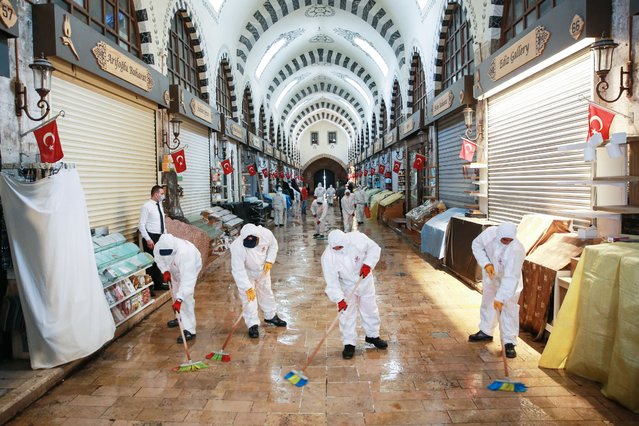 Municipal workers conduct cleaning and disinfection works at Historic Egyptian Bazaar in Istanbul, Turkey on May 28, 2020. The Egyptian Bazaar will open its doors to visitors on June 1 after a hiatus due to the coronavirus (Covid-19) pandemic. (Photo by Ahmet Bolat/Anadolu Agency via Getty Images)
Edit Del
30 May 2020 00:03:00, post received 0 comments
Publication archive:
←   →
Popular tags:
All tags
Last searches: