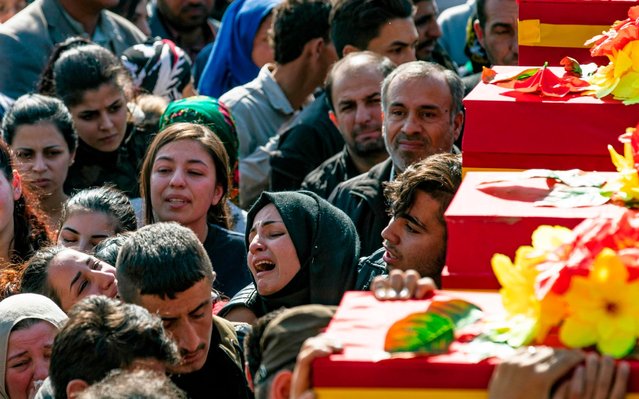 Syrian Kurdish mourners attend the funeral of victims of bombings two days ago in the northeastern city of Qamishli, on November 13, 2019. Three simultaneous bombings killed at least six civilians on November 11 in Qamishli, the latest attack to target the de-facto capital of the country's embattled Kurdish minority. There was no immediate claim of responsibility for the bombings, which came after the Islamic State group said it was responsible for the killing of a priest from the city. (Photo by Delil Souleiman/AFP Photo) 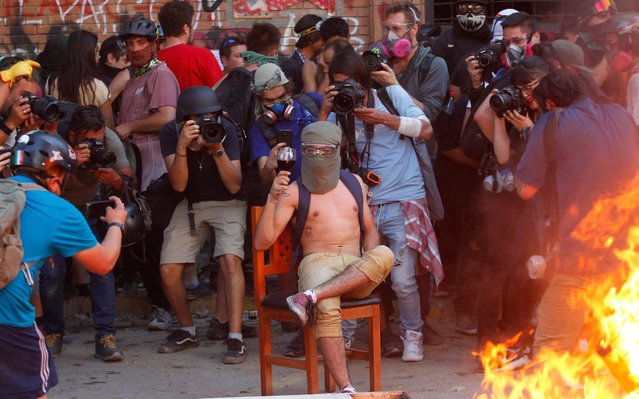 A protester poses with a glass of wine during a national strike and general demonstration called by different workers unions on November 12, 2019 in Santiago, Chile. Call was made by the National Strike Committee which gathers workers of different industries including port, mining, construction, industry, trade, education, health care, agriculture and public services sectors. On Sunday, Government announced it has agreed to start the process to write a new Constitution for the country, which is one of the most repeated demands by the demonstrators since October 18. Social unrest continues since a raise in subway fare triggered more demands related to health care, pension system, public education, social mobility, privatization of water services and corruption. (Photo by Marcelo Hernandez/Getty Images) 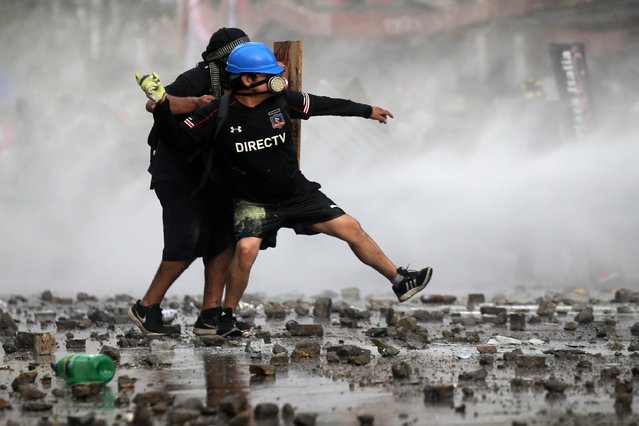 Demonstrators clash with riot police during a protest demanding greater social reform from Chilean President Sebastian Pinera on November 12, 2019. Violent protests broke out in Chile's capital Santiago on Tuesday as the country's currency dropped to a historic low after weeks of mass street demonstrations that have left the South American country in crisis. (Photo by Javier Torres/AFP Photo) 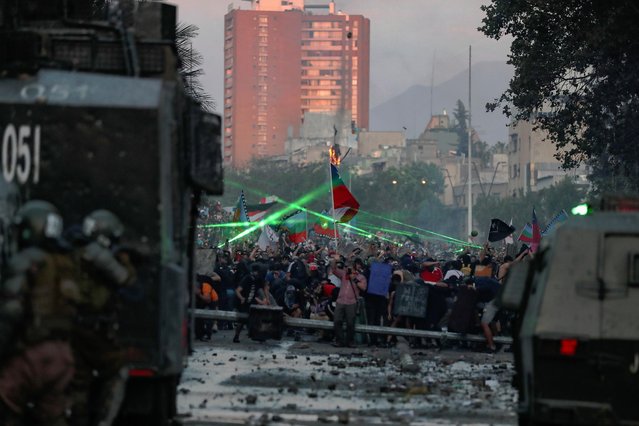 Riot police and demonstrators are seen amid laser beams during a protest against Chile's government in Santiago, Chile on November 12, 2019. (Photo by Ivan Alvarado/Reuters) 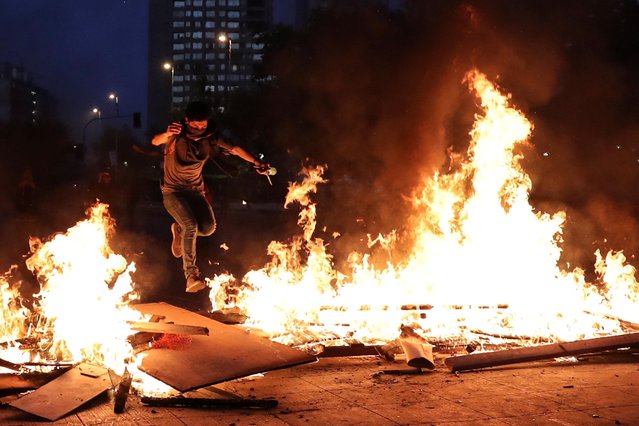 A demonstrator jumps over a burning barricade during a protest against Chile's government in Santiago, Chile on November 12, 2019. (Photo by Ivan Alvarado/Reuters) 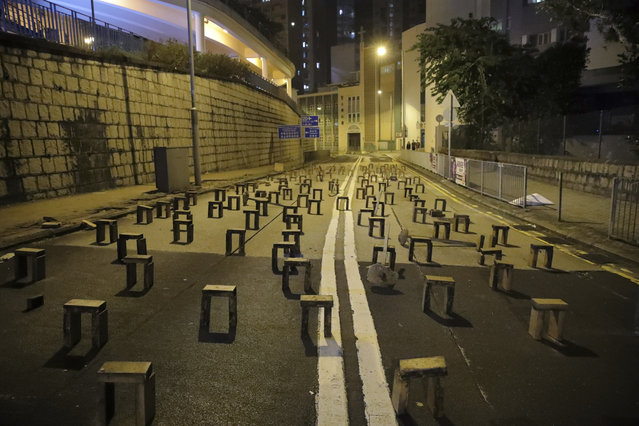 Bricks are set by pro-democracy protesters outside the campus of the University of Hong Kong, early Thursday, November 14, 2019. University students from mainland China and Taiwan are fleeing Hong Kong, while those from three Scandinavian countries have been moved or urged to leave as college campuses become the latest battleground in the city's 5-month-long anti-government unrest. (Photo by Kin Cheung/AP Photo) 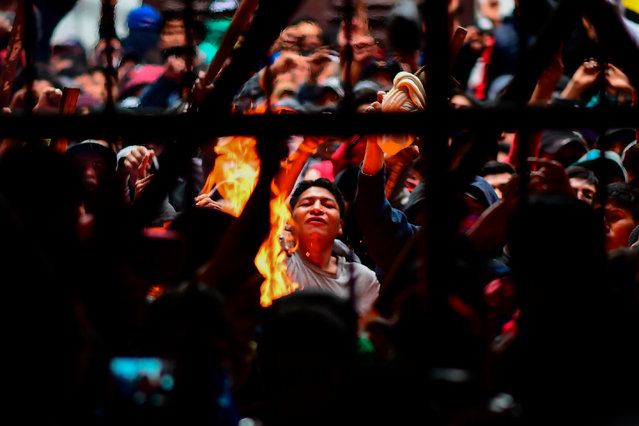 Prisoners are seen at the San Pedro prison during a riot demanding the resignation of prisons' director Ernesto Vergara in La Paz on November 12, 2019. Bolivia's Evo Morales was en route to exile in Mexico on Tuesday, leaving behind a country in turmoil after his abrupt resignation as president. The senator set to succeed Morales as interim president, Jeanine Anez, pledged to call fresh elections to end the political crisis. (Photo by Ronaldo Schemidt/AFP Photo) 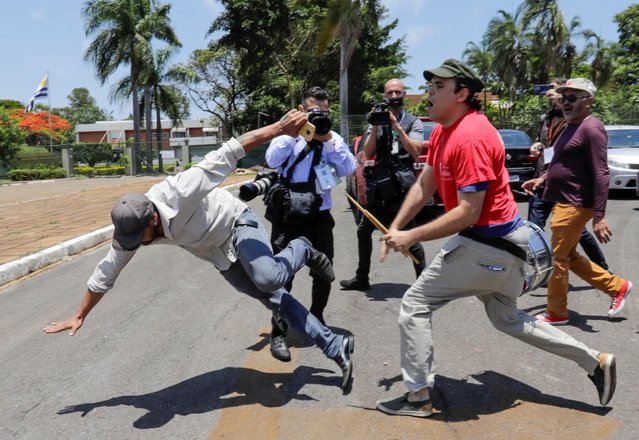 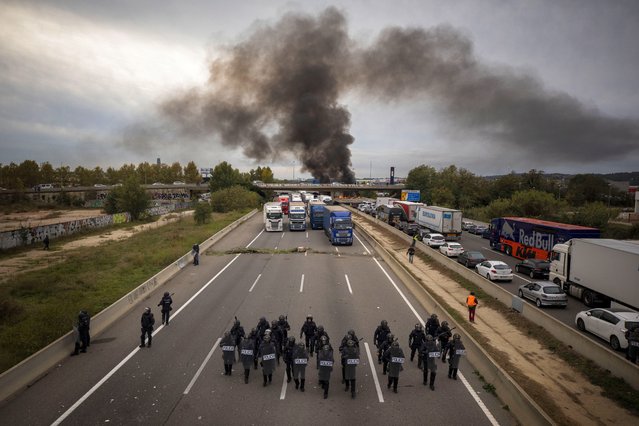 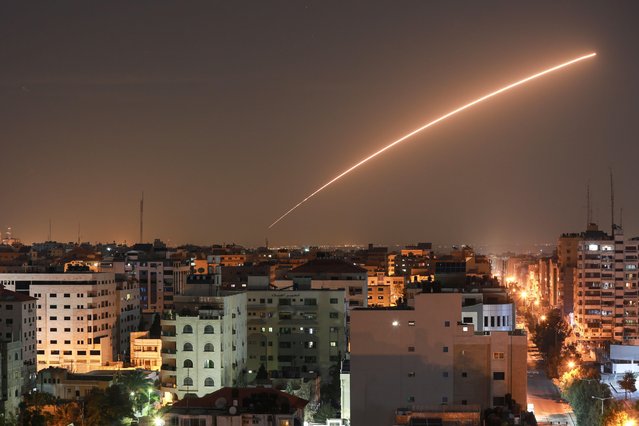 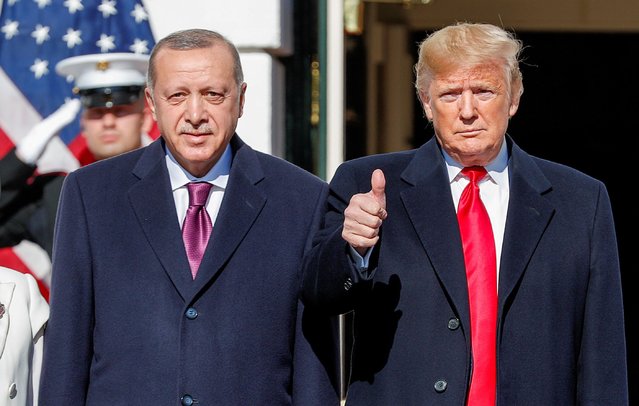 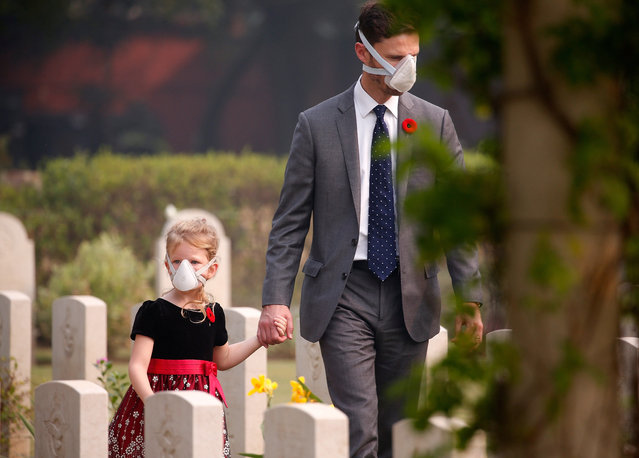 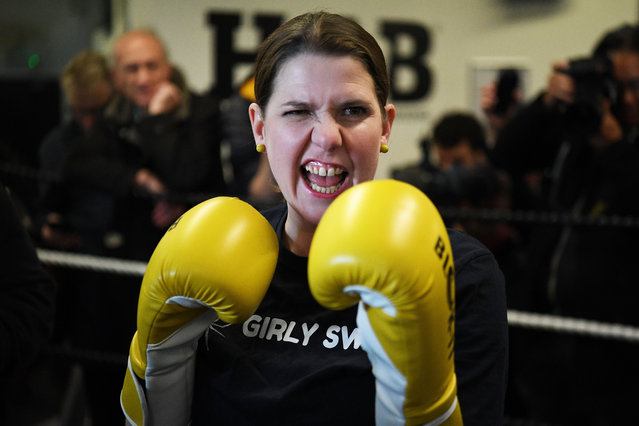 Jo Swinson, Leader of the Liberal Democrats takes part in some boxing practice as she campaigns at a boxing gym for young people on November 13, 2019 in London, England. The United Kingdom will hold a general election on December 12. (Photo by Leon Neal/Getty Images) 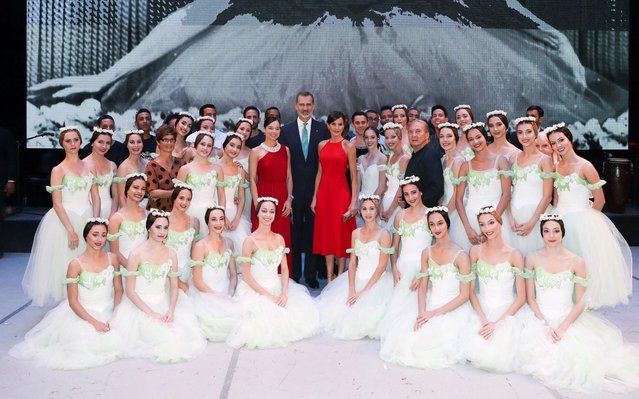 A handout photo made available by Spanish Royal Household shows Spain's King Felipe VI (C-L) and Queen Letizia (C-R) posing for a group photo with some dancers at Gran Teatro theater in Havana, Cuba, 12 November 2019 (issued 13 November 2019). Cuba's National Ballet company performed a passage of Giselle ballet as part of a gala in Spanish royal couple's honor. Spanish monarch and his wife are on a state visit in Cuba. (Photo by Jose A. Jimenez/EPA/EFE) 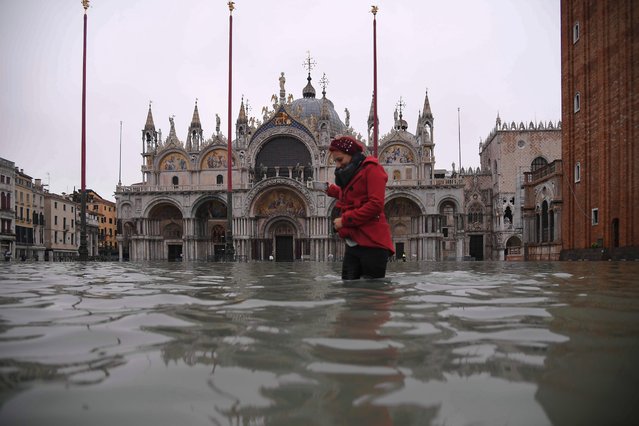 A woman crosses the flooded St. Mark's squareby St. Mark's Basilica after an exceptional overnight “Alta Acqua” high tide water level, early on November 13, 2019 in Venice. Powerful rainstorms hit Italy on November 12, with the worst affected areas in the south and Venice, where there was widespread flooding. Within a cyclone that threatens the country, exceptional high water were rising in Venice, with the sirocco winds blowing northwards from the Adriatic sea against the lagoon’s outlets and preventing the water from flowing back into the sea. At 22:40pm the tide reached 183 cm, the second measure in history after the 198 cm of the 1966 flood. (Photo by Marco Bertorello/AFP Photo) 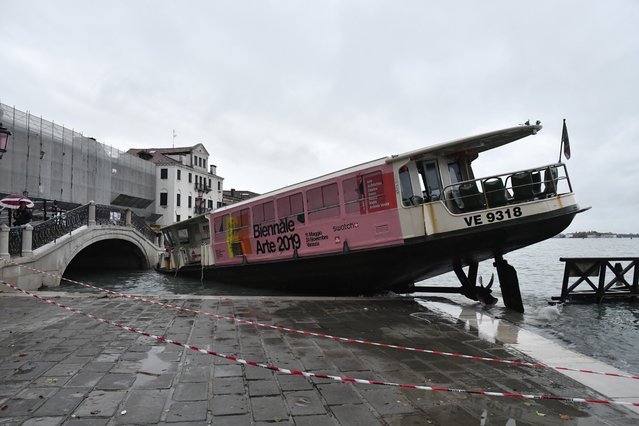 A stranded ferry boat lies on its side, in Venice, Wednesday, November 13, 2019. The mayor of Venice is blaming climate change for flooding in the historic canal city that has reached the second-highest levels ever recorded, as another exceptional water level was recorded Wednesday. The high-water mark hit 187 centimeters (74 inches) late Tuesday, meaning more than 85% of the city was flooded. (Photo by Luigi Costantini/AP Photo) 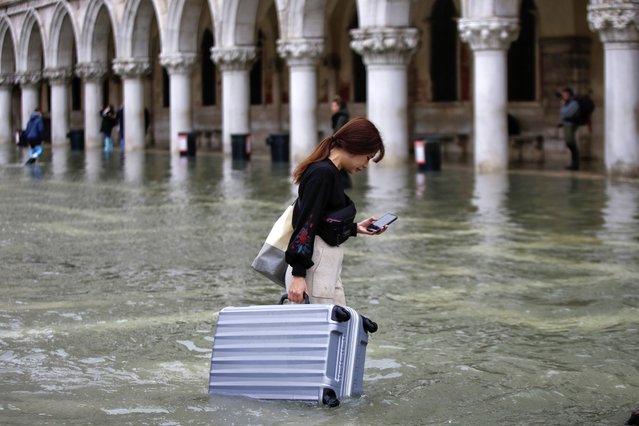 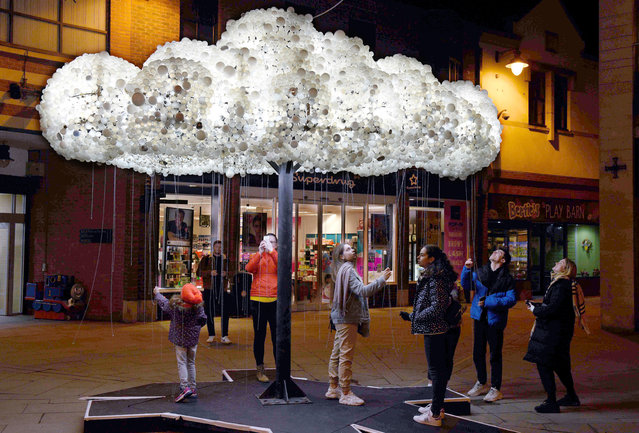 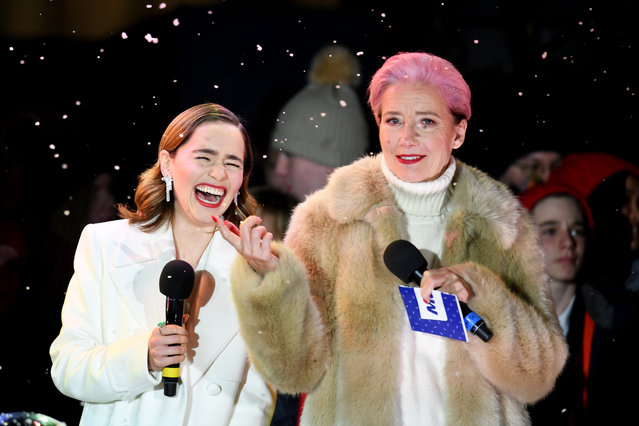 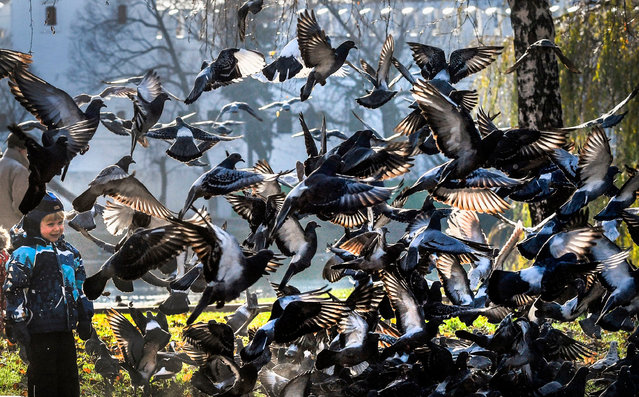