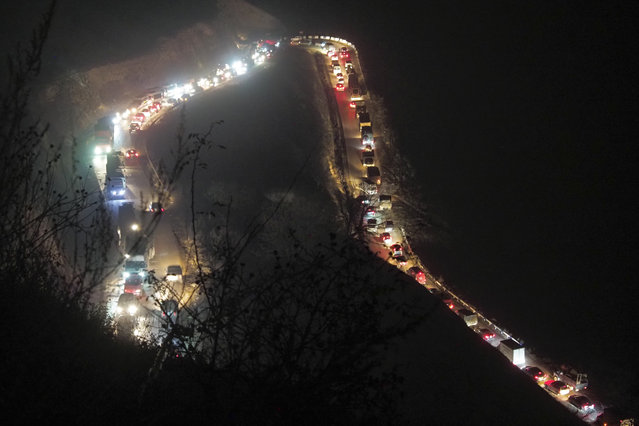 Cars and trucks stuck in a huge traffic jam climbing along the road from Kalbajar to a mountain pass leaving the separatist region of Nagorno-Karabakh to Armenia, on Saturday, November 14, 2020. The territory is to be turned over to Azerbaijan on Sunday as part of territorial concessions in an agreement to end six weeks of intense fighting with Armenian forces. Hundreds of thousands of Azeris were displaced by the war that ended in 1994. It is unclear when any civilians might try to settle in Karvachar – which will now be known by its Azeri name Kalbajar – or elsewhere. (Photo by Dmitry Lovetsky/AP Photo) 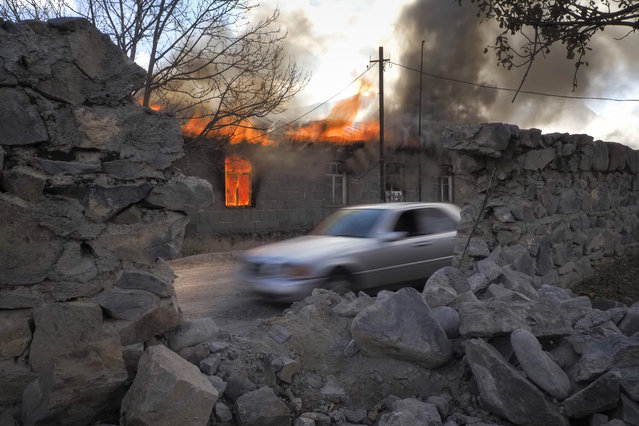 Smoke and flame rises from a burning house in an area once occupied by Armenian forces but soon to be turned over to Azerbaijan, in Karvachar, the separatist region of Nagorno-Karabakh, on Friday, November 13, 2020. Under an agreement ending weeks of intense fighting over the Nagorno-Karabakh region, some Armenian-held territories adjacent to the region are passing to Azerbaijan. (Photo by Dmitry Lovetsky/AP Photo) A man holds an icon from the Dadivank, an Armenian Apostolic Church monastery dating to the 9th century, as ethnic Armenians leave the separatist region of Nagorno-Karabakh to Armenia, Saturday, November 14, 2020. (Photo by Dmitry Lovetsky/AP Photo) 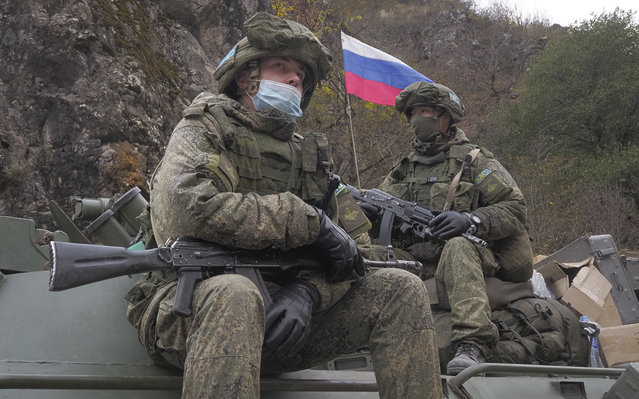 Russian peacekeepers sit a top of an APC as they patrol an area near the Dadivank, an Armenian Apostolic Church monastery, as ethnic Armenians leave the separatist region of Nagorno-Karabakh to Armenia, Saturday, November 14, 2020. (Photo by Dmitry Lovetsky/AP Photo) 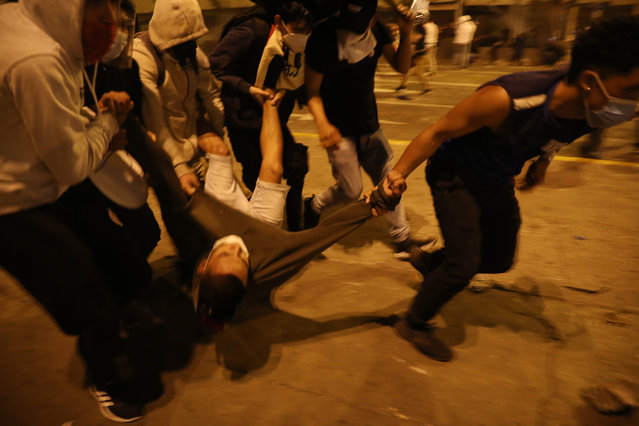 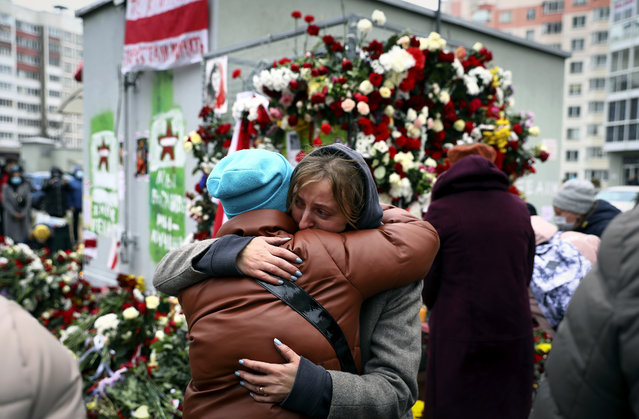 Two women embrace each other as people gather to honor 31-year-old Raman Bandarenka, who died Thursday at a Minsk hospital after several hours of surgery due to serious injuries, in Minsk, Belarus, Friday, November 13, 2020. Thousands of people have rallied in Belarus on Friday following the death of a 31-year-old opposition supporter who died in a hospital after he was reportedly beaten by security forces, and the European Union condemned the continued violent crackdown that Belarusian authorities have waged on peaceful protesters. (Photo by AP Photo/Stringer) 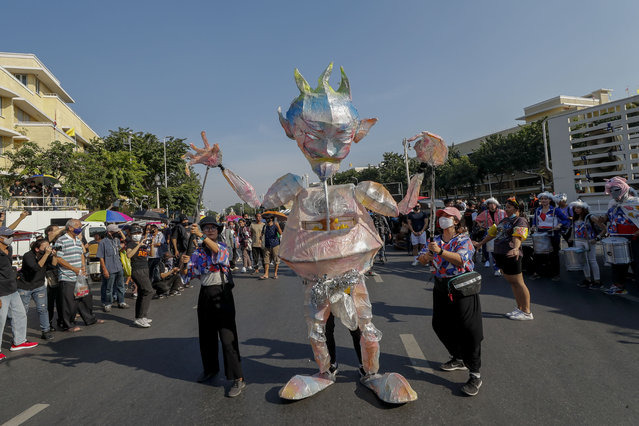 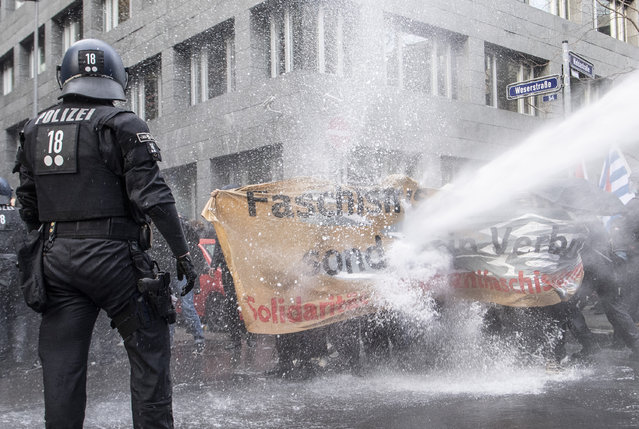 The police use a water cannon on the opponents of the “lateral thinking” demonstration in the city centre under the motto “No lockdown for Bembeltown!” in Frankfurt, Germany, Saturday, November14, 2020. (Photo by Boris Roessler/dpa via AP Photo) A woman takes part in a demonstration against the government's Corona restrictions in Frankfurt, Germany, Saturday, November 14, 2020. (Photo by Michael Probst/AP Photo) 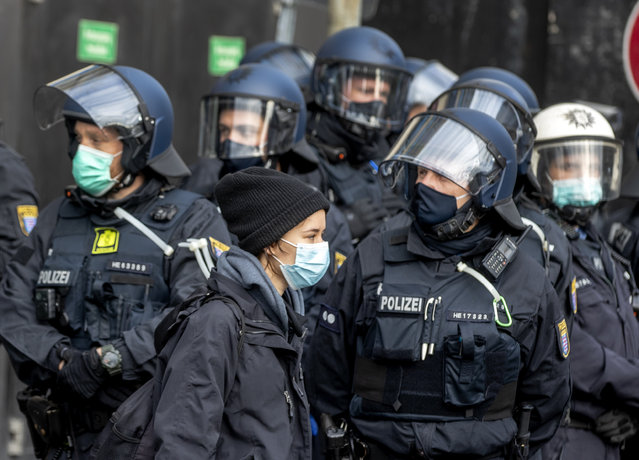 A woman passes police officers during a demonstration of hundreds of people against the government's Corona restrictions in Frankfurt, Germany, Saturday, November 14, 2020. (Photo by Michael Probst/AP Photo) 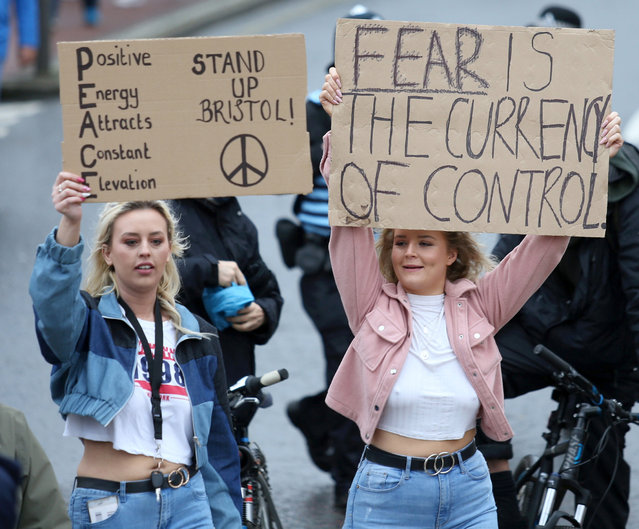 Protesters hold placards during the anti-lockdown protest on November 14, 2020 in Bristol, England. Police had warned protesters to cancel the march or face possible fines. Throughout the covid-19 pandemic, there have been recurring, if modest, protests across England against lockdown restrictions and other rules meant to curb the spread of the virus. (Photo by South West News Service) 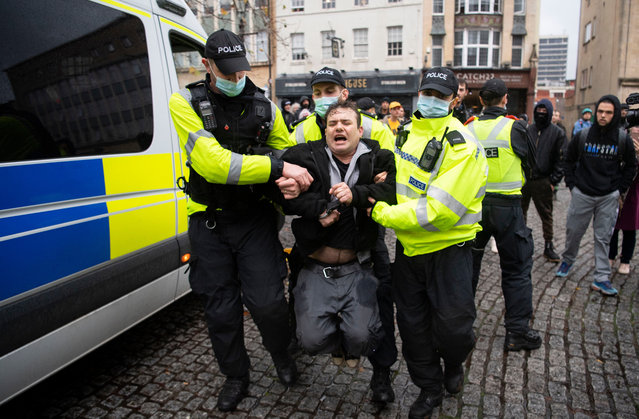 Police arrest a man during the anti-lockdown protest on November 14, 2020 in Bristol, England. (Photo by Matthew Horwood/Getty Images) 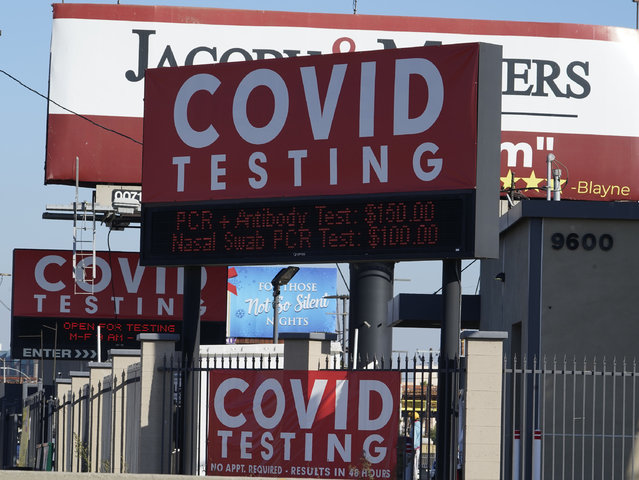 Advertisements for Covid-19 testing ares posted outside Los Angeles International Airport in Los Angeles, Friday, November 13, 2020. California has become the second state to record 1 million confirmed coronavirus infections. The governors of California, Oregon and Washington issued travel advisories Friday, Nov. 13, 2020, urging people entering their states or returning from outside the states to self-quarantine to slow the spread of the coronavirus, California Gov. Gavin Newsom's office said. The advisories urge people to avoid non-essential out-of-state travel, ask people to self-quarantine for 14 days after arriving from another state or country and encourage residents to stay local, a statement said. (Photo by Damian Dovarganes/AP Photo) 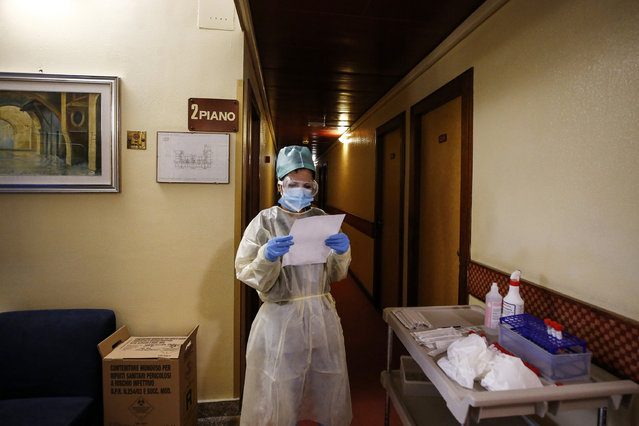 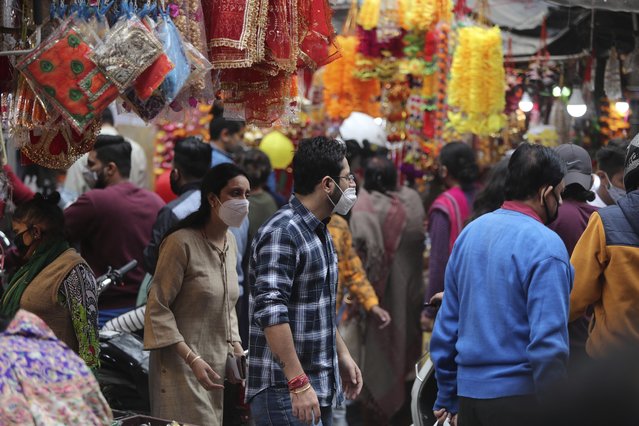 Indians wearing face masks as a precautionary measure against the coronavirus crowd a market during Diwali, the Hindu festival of lights, in Jammu, India, Saturday, November 14, 2020. (Photo by Channi Anand/AP Photo) 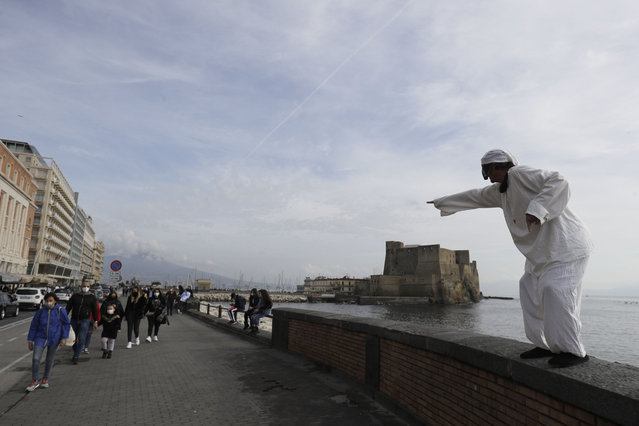