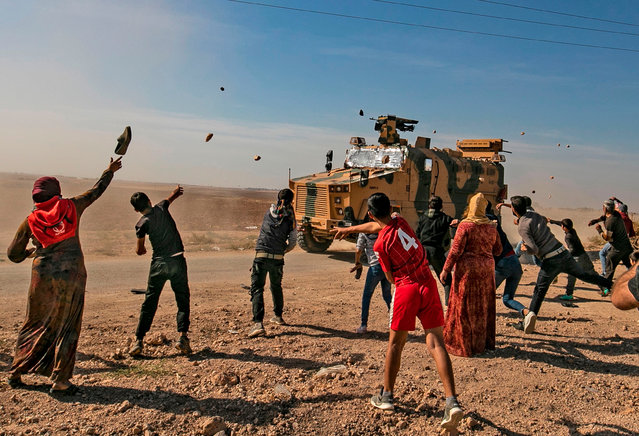 Syrians throw stones towards Turkish military vehicles during a Turkish-Russian army patrol near the town of Darbasiyah in Syria's northeastern Hasakeh province along the Syria-Turkey border on November 11, 2019. (Photo by Delil Souleiman/AFP Photo) 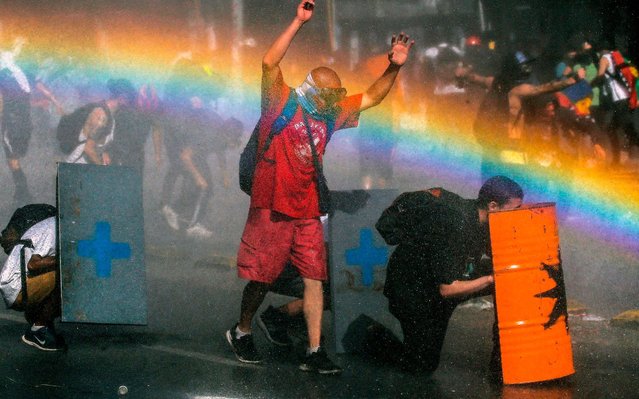 Demonstrators clash with riot police during a protest against the government and to commemorate the first anniversary of the death of Mapuche indigenous leader Camilo Castrillanca -killed in a police operation- in Santiago, on November 14, 2019. The demonstrators are demanding greater social reform from President Sebastian Pinera, who has announced several measures in a bid to appease protesters, including a pledge to change the constitution that dates from the 1973-90 Augusto Pinochet dictatorship. (Photo by Javier Torres/AFP Photo) Anti-government demonstrators shine laser pointers a the police during a protest in Santiago, Chile, Thursday, November 14, 2019. Students in Chile began protesting nearly a month ago over a subway fare hike. The demonstrations have morphed into a massive protest movement demanding improvements in basic services and benefits, including pensions, health, and education. (Photo by Esteban Felix/AP Photo) 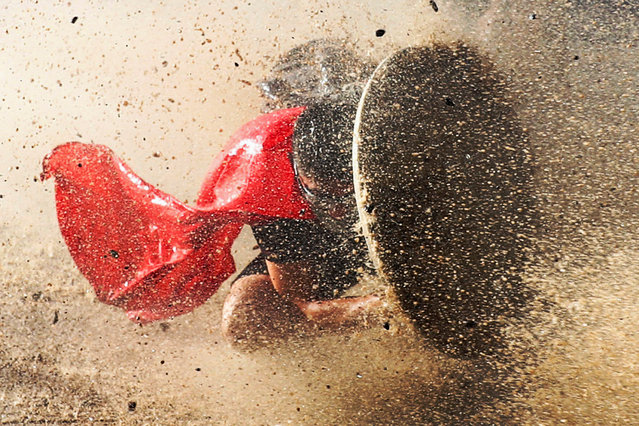 A demonstrator takes cover behind a makeshift shield during a protest against Chile's government in Santiago, Chile on November 15, 2019. (Photo by Pilar Olivares/Reuters) 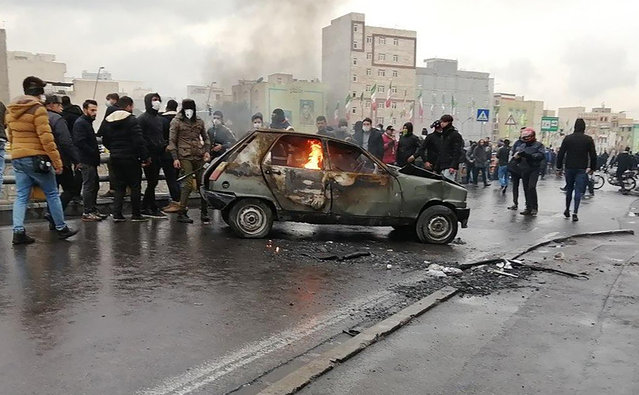 Iranian protesters gather around a burning car during a demonstration against an increase in gasoline prices in the capital Tehran, on November 16, 2019. One person was killed and others injured in protests across Iran, hours after a surprise decision to increase petrol prices by 50 percent for the first 60 litres and 300 percent for anything above that each month, and impose rationing. Authorities said the move was aimed at helping needy citizens, and expected to generate 300 trillion rials ($2.55 billion) per annum. (Photo by AFP Photo/Stringer) A woman cries in front of soldiers guarding a street during a march of supporters of former President Evo Morales in downtown La Paz, Bolivia, Friday, November 15, 2019. Morales resigned on Nov. 10 at military prompting following massive nationwide protests over suspected vote-rigging in an election in which he claimed to have won a fourth term in office. An Organization of American States audit of the vote found widespread irregularities. (Photo by Natacha Pisarenko/AP Photo) 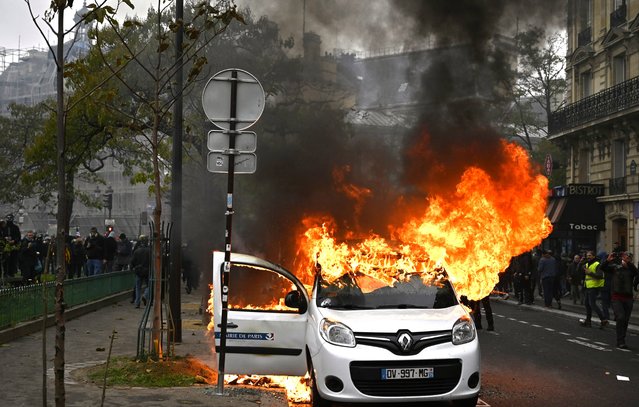 A burning vehicle is seen during “Gilets Jaunes” (Yellow Vests) protests on Place d'Italie to mark the first anniversary of the movement, in Paris, France on November 16, 2109. (Photo by Mustafa Yalcin/Anadolu Agency via Getty Images) 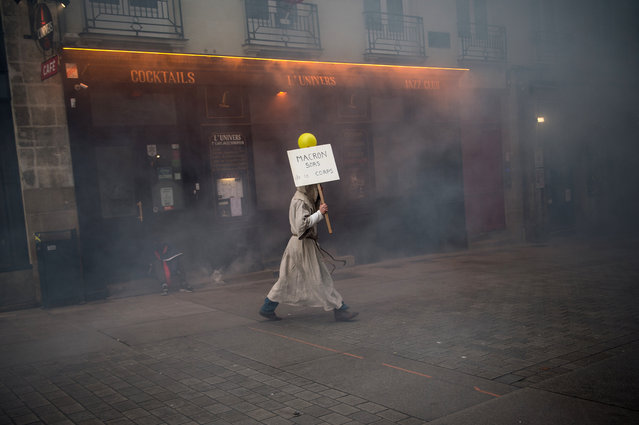 A man wearing a monk suit holds a placard reading “Macron get out this body” as he walks on November 16, 2019, in Nantes, western France during clashes on the sidelines of a demonstration marking the first anniversary of the “yellow vest” (gilets jaunes) movement. French “yellow vest” protesters are planning a series of nationwide demonstrations this weekend in a bid to show the government they can still muster support on the first anniversary of their movement. Numbers attending the protests and levels of violence have sharply diminished in recent months from the height of the movement, which began on November 17 last year with a giant Paris protest that drew almost 300,000 people. (Photo by Loic Venance/AFP Photo) 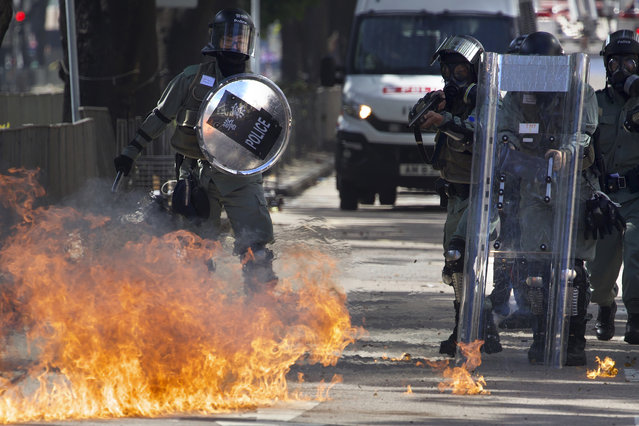 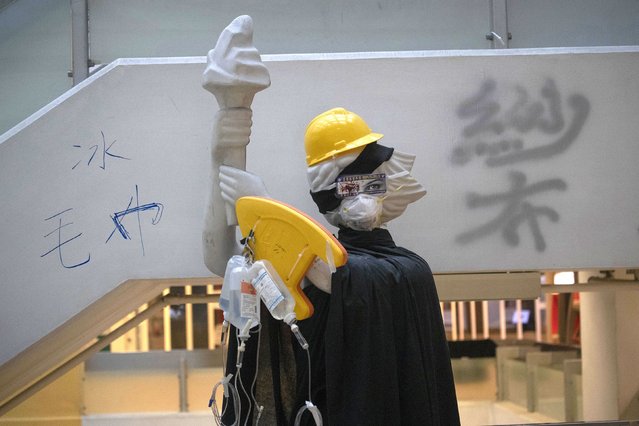 A statue of the Goddess of Democracy is dressed up with helmet, shield and drip bags at a first aid counter setup for possible injuries in the Hong Kong Polytechnic University in Hong Kong on Sunday, November 17, 2019. Most anti-government protesters left Hong Kong's universities Saturday after occupying them for about a week. Small contingents that remained harassed some of those cleaning up and kept a major cross-harbor tunnel closed. Words on wall reads “Bandage”, “Ice” and “Towel”. (Photo by Ng Han Guan/AP Photo) 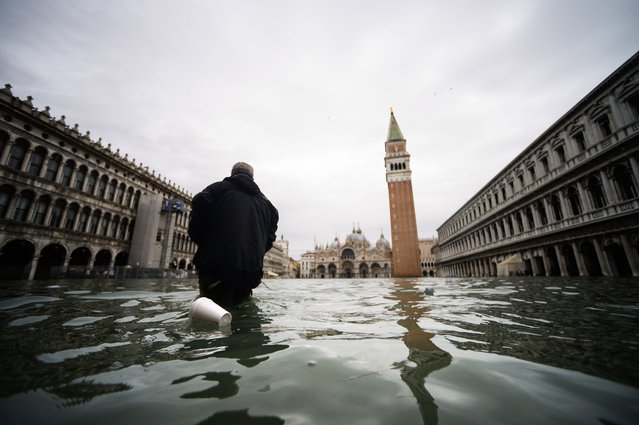 A man walks across the flooded St. Mark's Square, with St. Mark's Basilica (Rear L) and the Bell Tower on November 15, 2019 in Venice, two days after the city suffered its highest tide in 50 years. Flood-hit Venice was bracing for another exceptional high tide on November 15, as Italy declared a state of emergency for the UNESCO city where perilous deluges have caused millions of euros worth of damage. (Photo by Filippo Monteforte/AFP Photo) 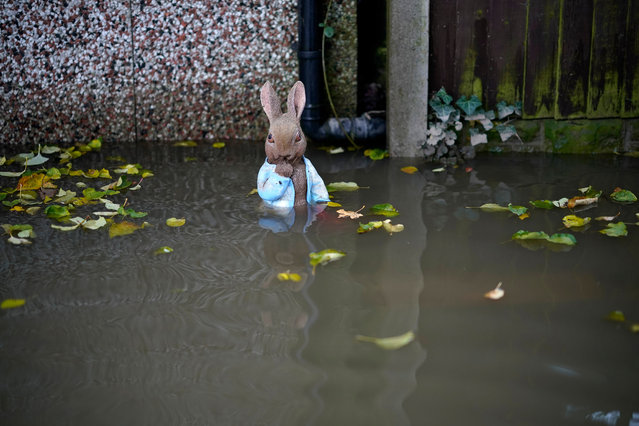 The village of Fishlake continues to suffer from flooding as residents start to salvage belongings from their homes and businesses on November 14, 2019 in Doncaster, England. Further weather warnings have been issued as more rain begins to hit areas that bore the brunt of this week's floodings. Soldiers have been deployed to help around some the worst hit areas in Doncaster and South Yorkshire (Photo by Christopher Furlong/Getty Images) 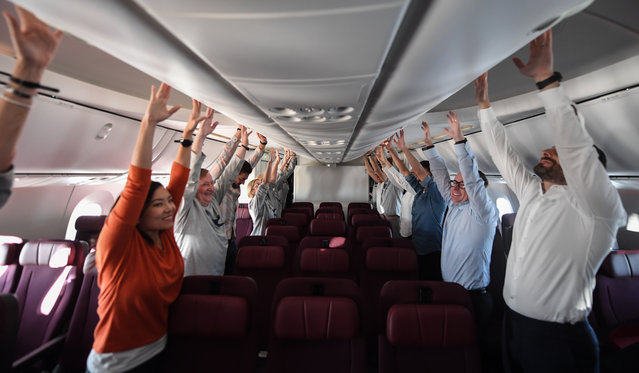 Passengers onboard QF7879 are taken through exercise classes during the flight from London to Sydney direct on November 15, 2019 in Sydney, Australia. The flight was restricted to 50 people, including 10 crew, to increase aircraft range, and included medical scientists and health experts on board to conduct studies in the cockpit and the cabin to help determine strategies to promote long haul inflight health and wellbeing on ultra-long haul flights. It comes as the national carrier continues to work towards the final frontier of global aviation by launching non-stop commercial flights between the US and the UK to the east coast of Australia in an ambitious project dubbed “Project Sunrise”. (Photo by James D. Morgan/Getty Images for Qantas) 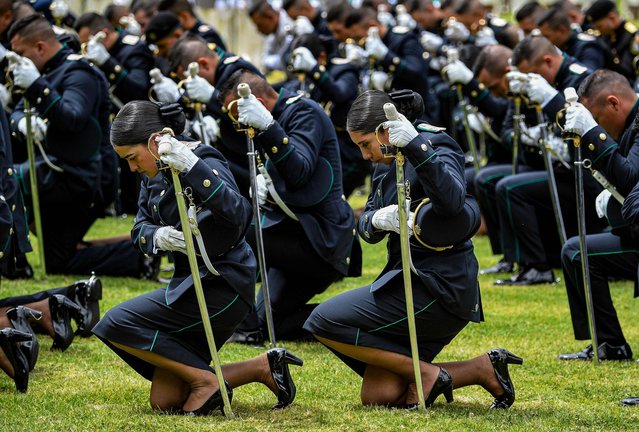