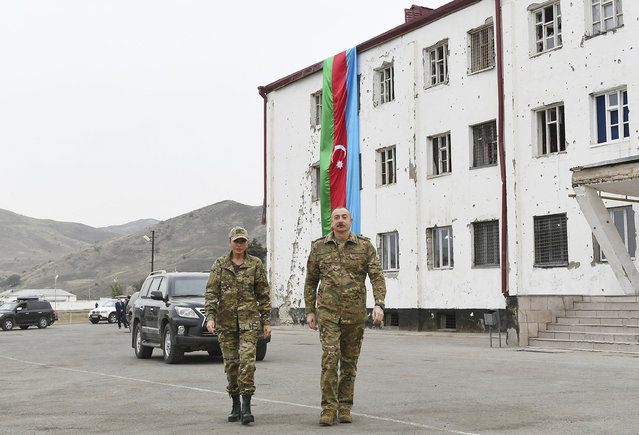 This handout photo provided Monday, November 16, 2020, by the Azerbaijan's Presidential Press Office, shows Azerbaijani President Ilham Aliyev and his wife and Azerbaijan's Vice President Mehriban Aliyeva visit the liberated from occupation Fuzuli and Jabrayil districts of Azerbaijan. Azerbaijan on Sunday postponed taking control of a territory ceded by Armenian forces in a cease-fire agreement, but denounced civilians leaving the area for burning houses and committing what it called “ecological terror”. (Photo by Vugar Amrullayev/Azerbaijani Presidential Press Office via AP Photo) 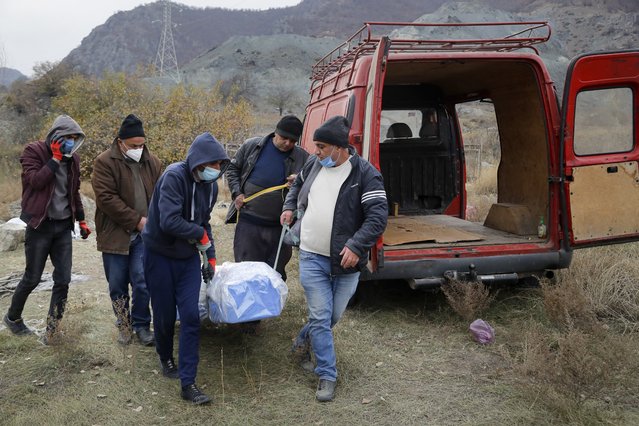 Ethnic Armenians carry a coffin with the body of their relative Sergei Gabrilyan, moved from a grave, to repatriate his remains to Armenia, in Kalbajar in separatist region of Nagorno-Karabakh, Monday, November 16, 2020. It is unclear when any civilians might try to settle in Karvachar, which will now be known by its Azeri name Kalbajar, or elsewhere. Armenians who are going to leave separatist region of Nagorno-Karabakh dig up the remains of their ancestors to bring them from the territory, which is to be handed over to Azerbaijanis. (Photo by Sergei Grits/AP Photo) 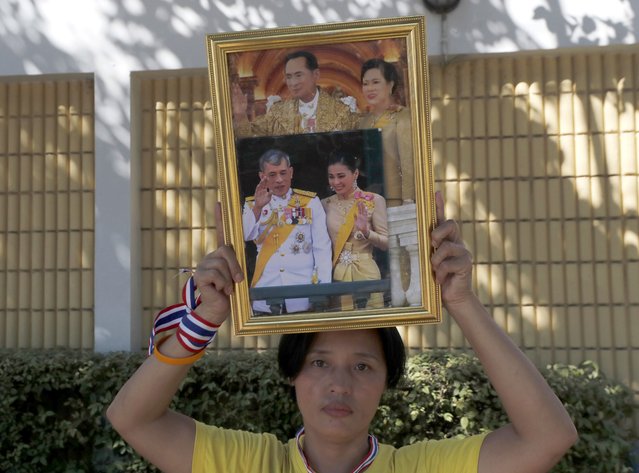 A supporter of the Thai monarchy holds aloft the images of late King Bhumibol Adulyadej and Queen Mother Sirikit and King Maha Vajiralongkorn and Queen Suthida near the parliament in Bangkok, Thailand, Tuesday, November 17, 2020. Thailand's political battleground shifted Tuesday to the country's Parliament, where lawmakers are considering proposals to amend the country's constitution, one of the core demands of the country's student-led pro-democracy movement. (Photo by Sakchai Lalit/AP Photo) 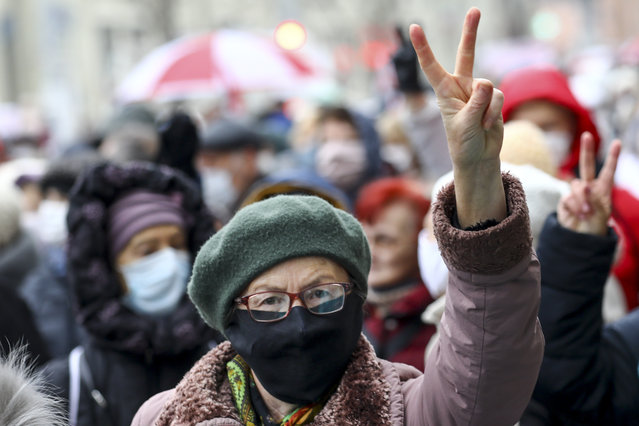 A woman wearing a face mask to protect against coronavirus gestures as she attends a pensioners' opposition rally to protest the official presidential election results in Minsk, Belarus, Monday, November 16, 2020. Crowds of retirees marched down the streets of the Belarusian capital on Monday, demanding the resignation of the country's authoritarian president and to end the government crackdown on peaceful protesters. (Photo by AP Photo/Stringer) 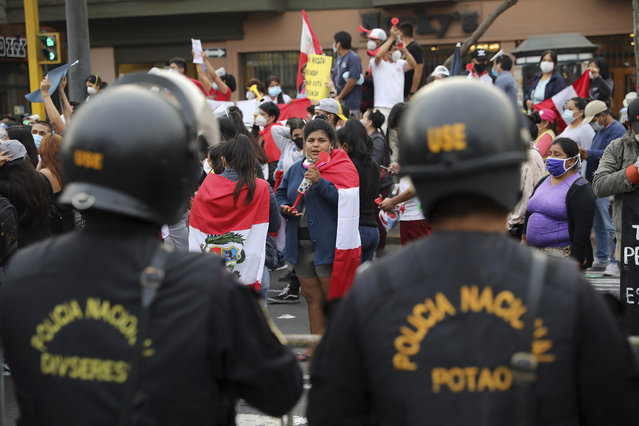 People celebrate in the street after Peru's new interim President Francisco Sagasti was designated by Congress to lead the nation, in Lima, Peru, Monday, November 16, 2020. Lawmakers chose Sagasti to become the nation's third president in the span of a week after they ousted Martin Vizcarra and the following protests forced his successor Manuel Merino to resign. (Photo by Rodrigo Abd/AP Photo) 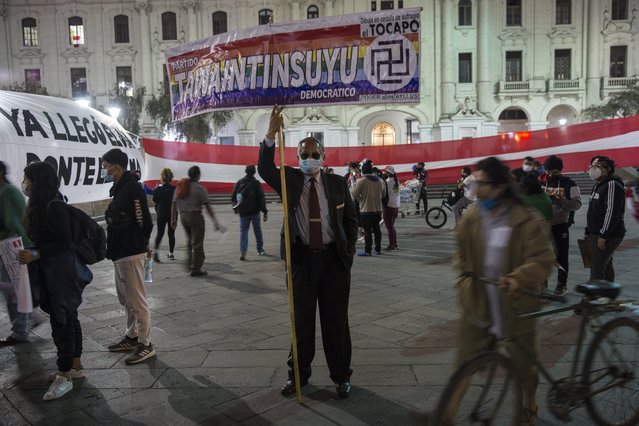 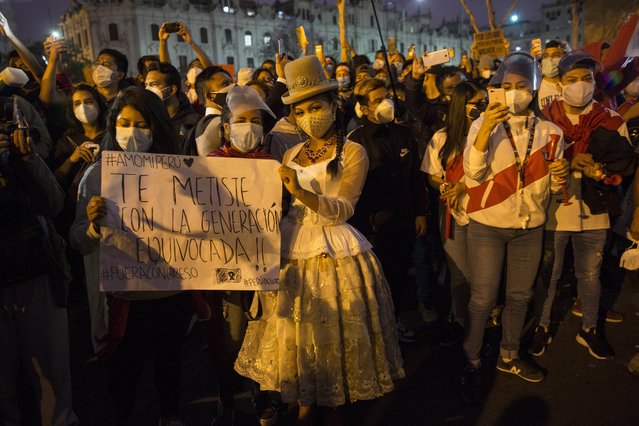 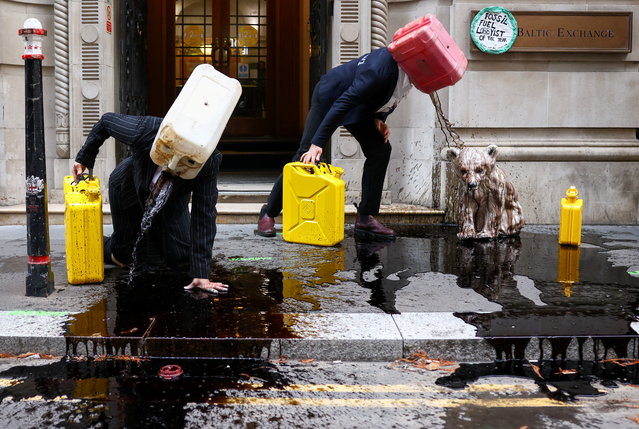 Activists from the climate action group Ocean Rebellion perform a stunt outside The Baltic Exchange building, in London, Britain on November 16, 2020. (Photo by Henry Nicholls/Reuters) 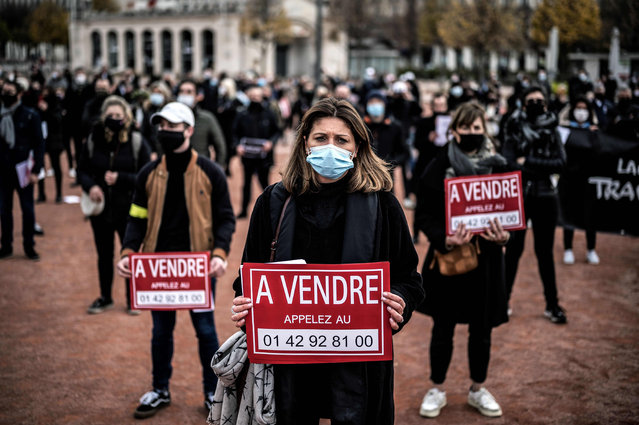 Demonstrators hold a placard reading “for sale” during a rally of shop owners calling for the reopening of their stores closed as part of measures taken by the government to close their establishments to curb the spread of the covid-19 pandemic on November 16, 2020 in Lyon. (Photo by Jeff Pachoud/AFP Photo) 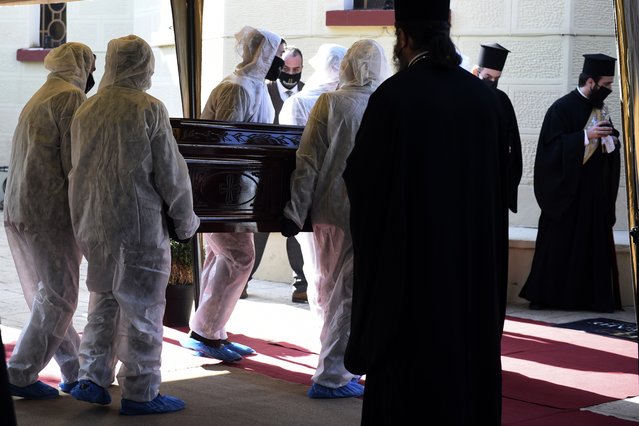 Priests wearing face masks to protect against the spread of the coronavirus, attend the funeral of senior clergyman Ioannis of Lagadas after he died of COVID-19, in Greece's Orthodox Church, in the northern city of Thessaloniki, Greece, Monday, November 16, 2020. Metropolitan Bishop Ioannis of Lagadas, 62, was an outspoken advocate of maintaining communion ceremonies – at which worshipers are given bread as well as wine with a shared spoon – during the pandemic, arguing that there was no risk of transmission. (Photo by Giannis Papanikos/AP Photo) 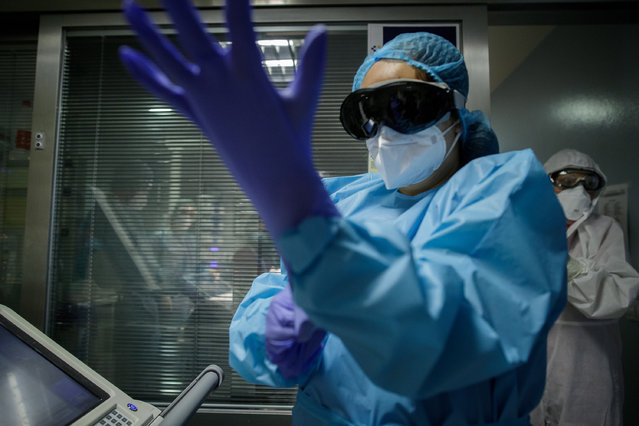 A paramedic puts on a protection suit ahead to take care a COVID-19 patient at Nuestra Senora de La Candelaria hospital in Santa Cruz de Tenerife, Tenerife Island, Canary Islands, Spain, 16 November 2020. The hospital was the medical center in charge of first relevant coronavirus crisis recorded in Spain when a hotel had to be isolated due to several COVID-19 cases in southern Tenerife last February. (Photo by Rammn de la Rocha/EPA/EFE) 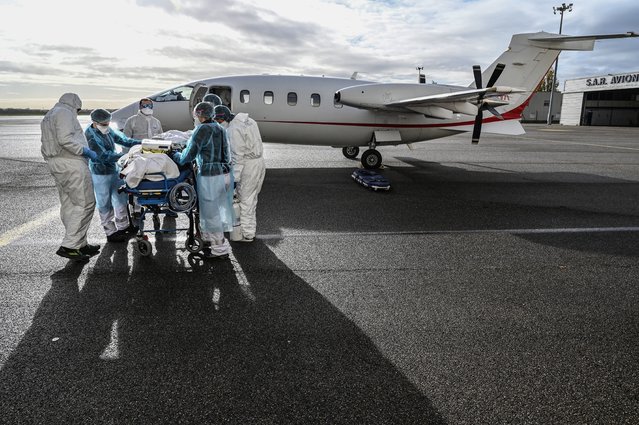 Medical staff transport a patient affected with COVID-19 to be evacuated to another hospital, at Bron airport near Lyon, central France, Monday, November 16, 2020. The number of people hospitalized in France with the virus dropped this weekend for this first time since September, after two weeks of new nationwide lockdown measures aimed at slowing surging infections and easing hospital strain. (Photo by Philippe Desmazes/Pool via AP Photo) 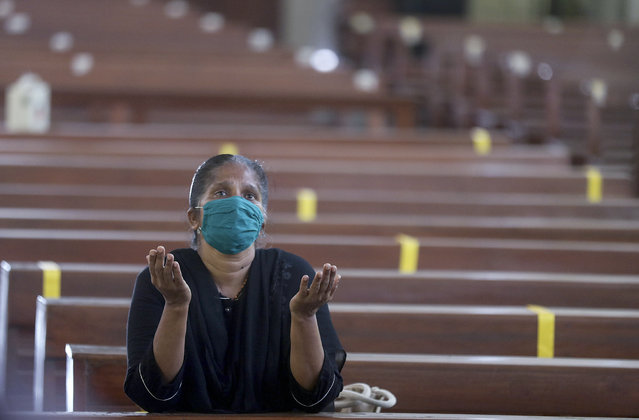 A Christian devotee wearing a mask offers prayers at a Church in Mumbai, India, Monday, November 16, 2020. Religious places across the Maharashtra state reopened for devotees on Monday after remaining closed due to the COVID-19 pandemic. A country of nearly 1.4 billion people, India is the world's second most coronavirus affected country after the United States. (Photo by Rafiq Maqbool/AP Photo) 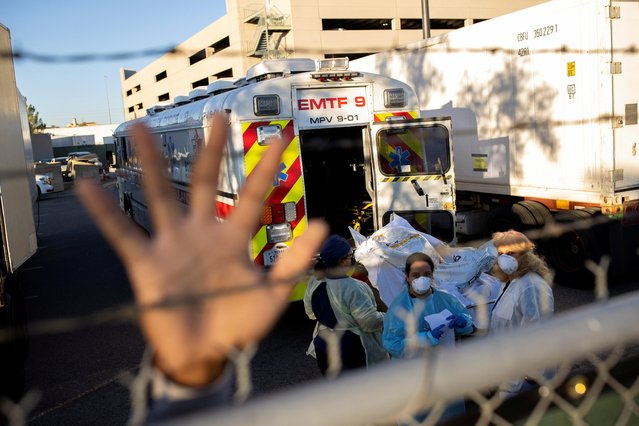 An El Paso County Sheriff's Officer tries to block photographs from being taken as bodies are moved to refrigerated trailers, deployed during a surge of coronavirus deaths, outside the County of El Paso Medical Examiner's Office in El Paso, Texas, November 16, 2020. (Photo by Ivan Pierre Aguirre/Reuters) 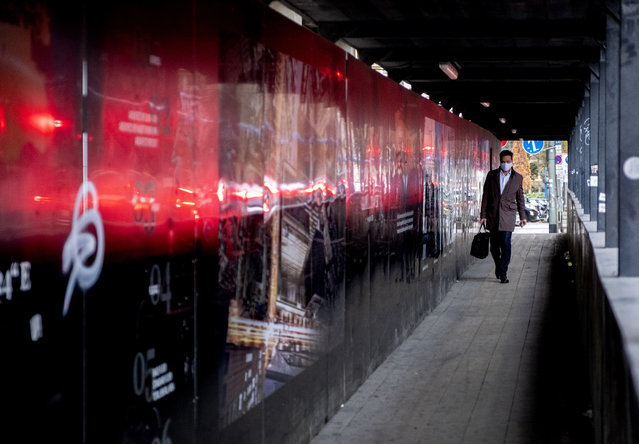 A man wearing a face mask walks through small tunnel of a construction site in the banking district of Frankfurt, Germany, Monday, November 16, 2020. (Photo by Michael Probst/AP Photo) 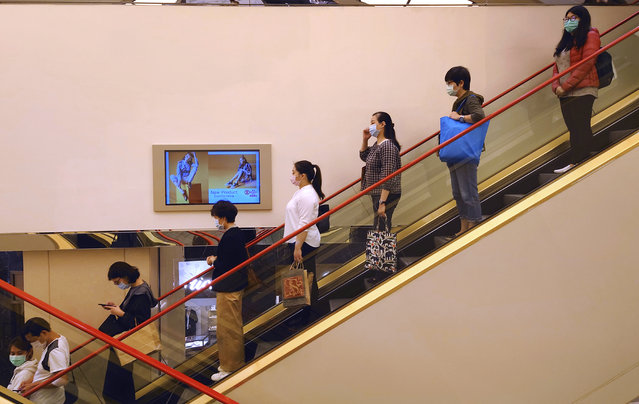 People wear face masks to help curb the spread of the coronavirus at a department store in Taipei, Taiwan, Monday, November 16, 2020. (Photo by Chiang Ying-ying/AP Photo) 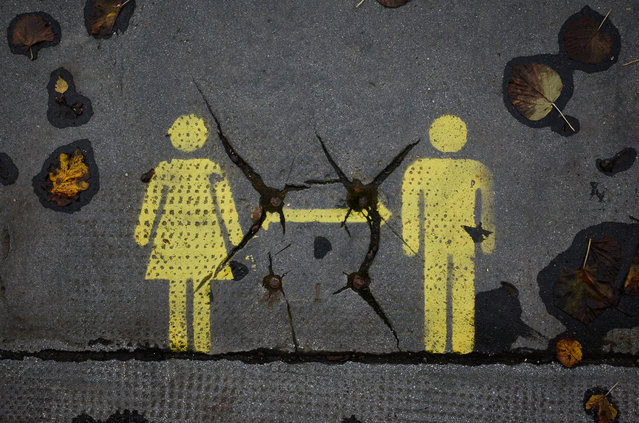 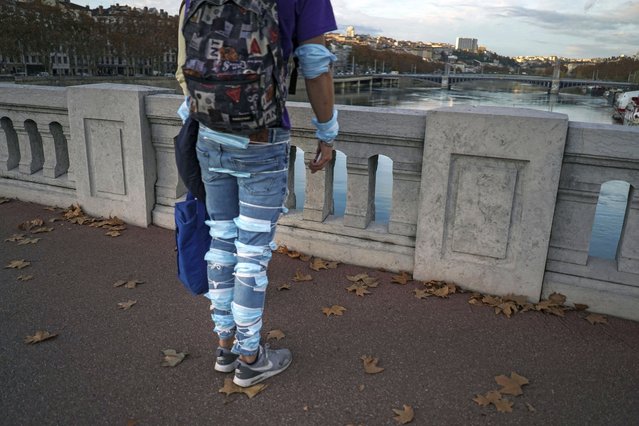 A man wearing face masks on his legs stands on a bridge in the center of Lyon, central France, Monday, November 16, 2020. France's health minister says the country is “progressively getting back in control” of its resurgent coronavirus epidemic but warns that it will quickly flare again if people start ignoring lockdown rules. (Photo by Laurent Cipriani/AP Photo)
Edit Del
18 Nov 2020 00:07:00, post received 0 comments
Publication archive:
←   →
Popular tags:
All tags
Last searches: