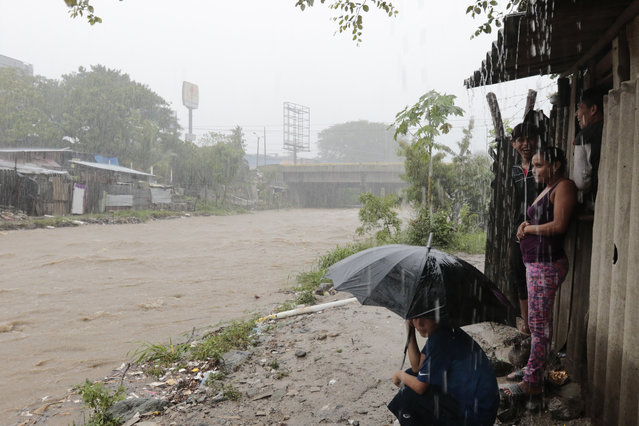 People watch the rising waters of the Rio Bermejo in the wake of Hurricane Iota in San Pedro Sula, Honduras, Tuesday, November 17, 2020. Hurricane Iota tore across Nicaragua on Tuesday, hours after roaring ashore as a Category 4 storm along almost exactly the same stretch of the Caribbean coast that was recently devastated by an equally powerful hurricane. (Photo by Delmer Martinez/AP Photo) 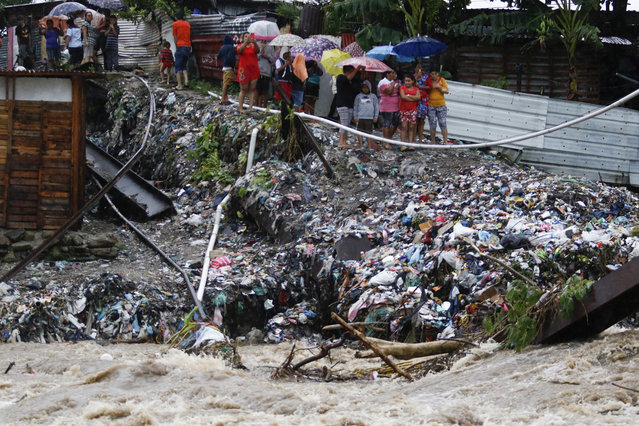 People watch the waters of the Rio Bermejo in the wake of Hurricane Iota in San Pedro Sula, Honduras, Tuesday, November 17, 2020. (Photo by Delmer Martinez/AP Photo) 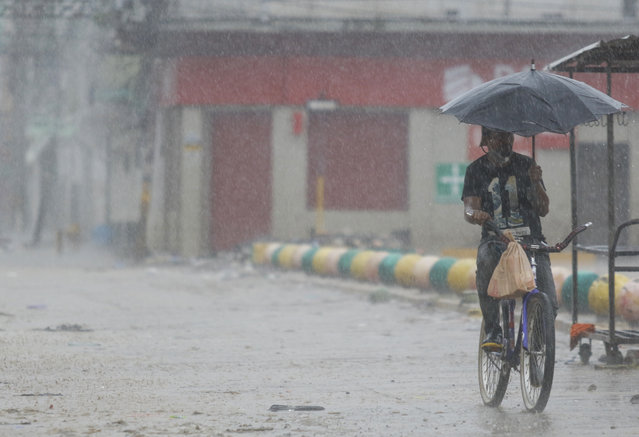 A man rides his bicycle under the rain brought by Hurricane Iota, in La Lima, Honduras, Tuesday, November 17, 2020. (Photo by Delmer Martinez/AP Photo) 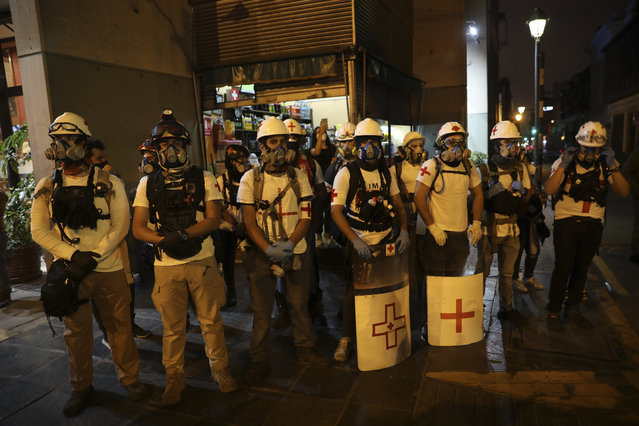 Volunteer medics stand on the sidelines of a protest by people against impunity and for a constitutional reform, after Francisco Sagasti was sworn-in as the new, interim president in Lima, Peru, Tuesday, November 17, 2020. Sagasti's appointment marks a tumultuous week in which thousands took to the streets outraged by Congress' decision to oust popular ex-President Martín Vizcarra. (Photo by Rodrigo Abd/AP Photo) 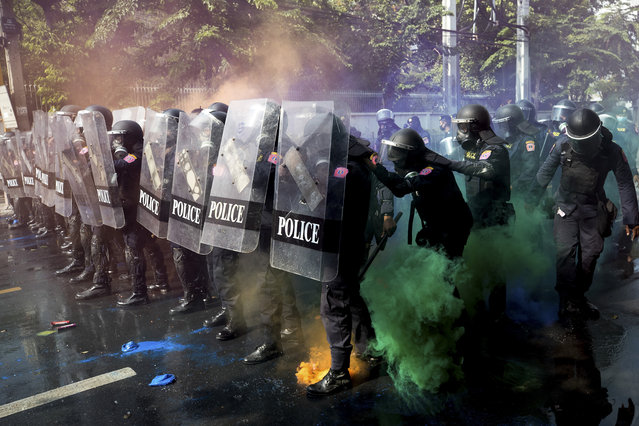 Riot police stand in formation as pro-democracy protesters throw smoke bombs near the Parliament in Bangkok, Tuesday, November 17, 2020. Thailand's political battleground shifted to the country's Parliament Tuesday, where lawmakers are considering proposals to amend the country's constitution, one of the core demands of the student-led pro-democracy movement. (Photo by Wason Wanichakorn/AP Photo) 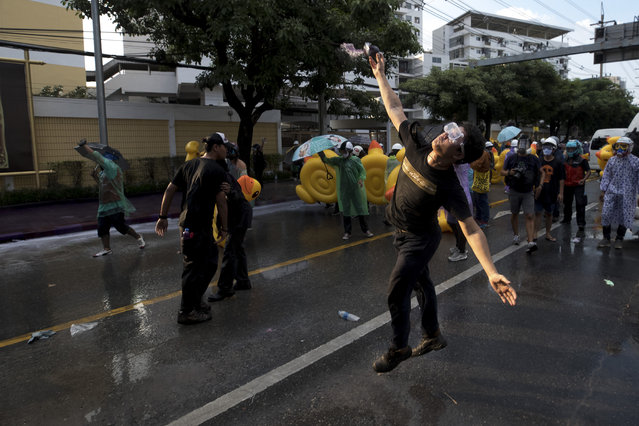 A pro-democracy protester hurls a color paint ball as police fire water cannons during an anti-government rally near the Parliament in Bangkok, Tuesday, November 17, 2020. (Photo by Wason Wanichakorn/AP Photo) 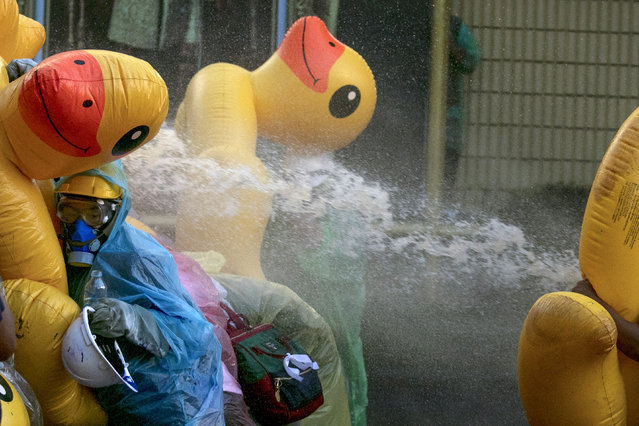 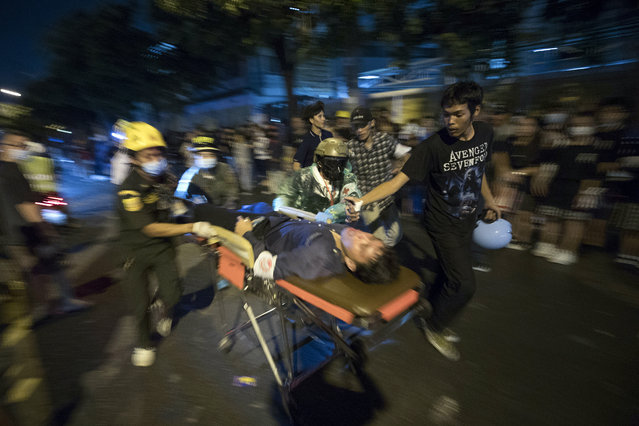 Pro-democracy protesters help to move a protester with gun-shot injuries during an anti-government rally outside the Parliament in Bangkok, Tuesday, November 17, 2020. Thailand's political battleground shifted to the country's Parliament Tuesday, where lawmakers are considering proposals to amend the country's constitution, one of the core demands of the student-led pro-democracy movement. (Photo by Wason Wanichakorn/AP Photo) 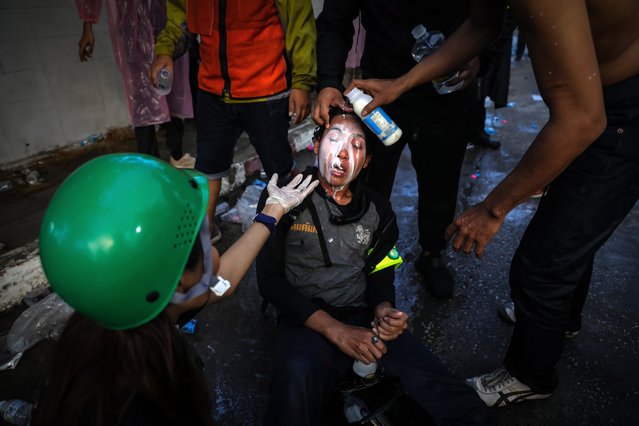 People assist a woman who was exposed to tear gas by pouring milk over her face after police fired tear gas and water canon to try and disperse protesters outside Parliament on November 17, 2020 in Bangkok, Thailand. The demonstrators gathered outside parliament, on Tuesday, as the Thai government met to discuss amendments to the country's constitution. (Photo by Lauren DeCicca/Getty Images) 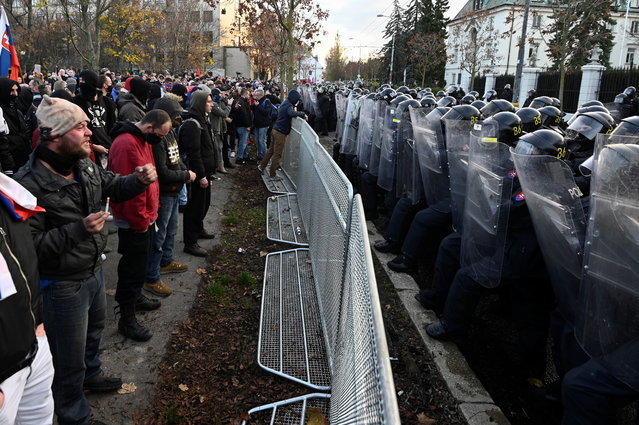 Security forces line up as people take part in a protest against the government's coronavirus disease (COVID-19) restrictions on the country's Day of the Struggle for Freedom and Democracy, in front of the Slovak government building, in Bratislava, Slovakia, November 17, 2020. (Photo by Radovan Stoklasa/Reuters) 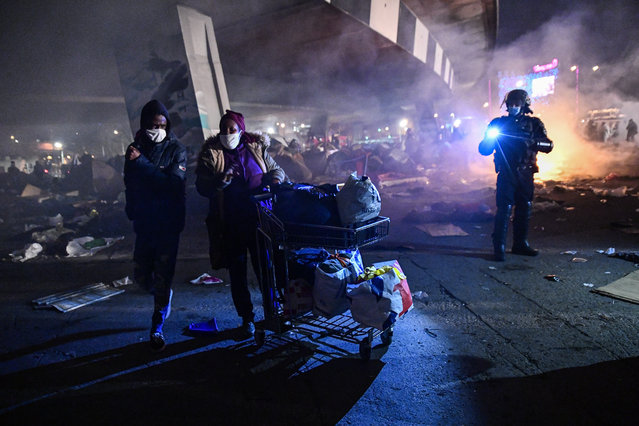 New evacuation of the migrant camp takes place at the gate of Paris, near Saint Denis (Seine saint denis 93) at dawn on November 17, 2020. Several thousand refugees were sheltered by bus, by the Paris police prefecture. (Photo by Julien Mattia/Anadolu Agency via Getty Images) 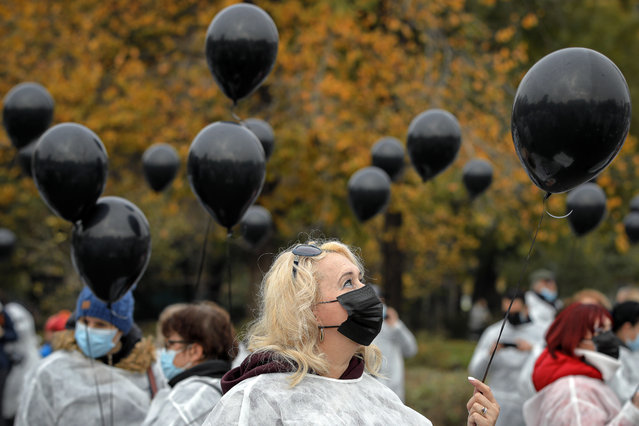 Medical workers, wearing masks for protection against the COVID-19 infection, hold black balloons in memory of those who lost their lives while in the care of the state health system in Bucharest, Romania, Tuesday, November 17, 2020. A fire last week at a hospital treating COVID-19 patients in northeastern Romania killed 11 people who were intubated in the intensive care unit. (Photo by Vadim Ghirda/AP Photo)

A woman, accompanied by a child, looks over as an airline crew wearing full personal protective equipment against COVID-19 walks through the international terminal at Los Angeles International Airport in Los Angeles on Tuesday, November 17, 2020. (Photo by Keith Birmingham/The Orange County Register via AP Photo) 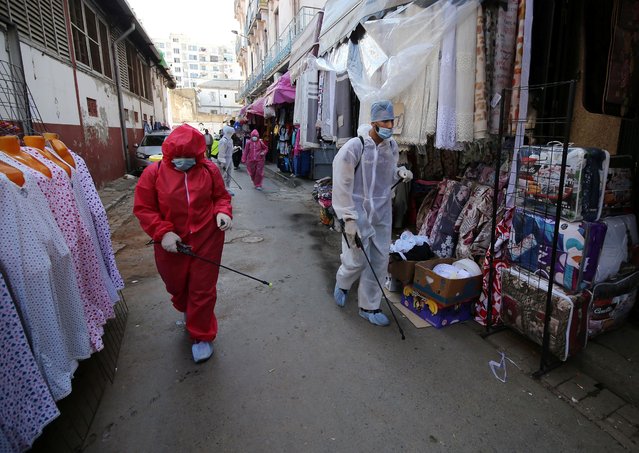 Disinfection operation by young volunteers in the capital, Algiers, Algeria on November 16, 2020, to fight against the new Corona virus (Covid-19), Algeria is witnessing a second wave of the Corona virus, and the number of infections are increasing terribly, and the Algerian government is taking new measures to fight the virus from November 17, 2020. (Photo by Xinhua News Agency via Getty Images) 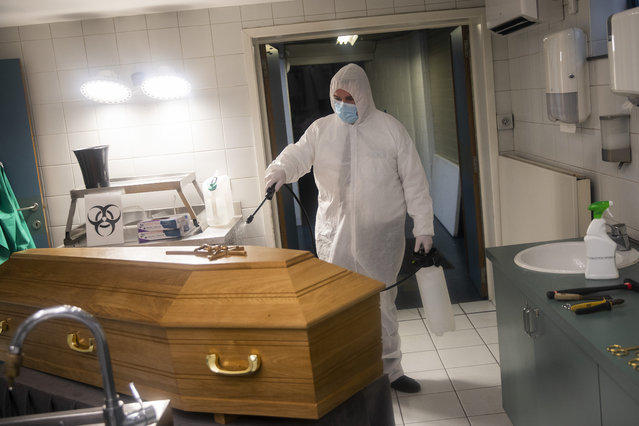 A worker, wearing a full protective equipment, disinfects the casket of someone who died of coronavirus COVID-19 at the Fontaine funeral home in Charleroi, Belgium, Tuesday, November 17, 2020. One of the hardest-hit countries in Europe, Belgium has reported more than 535,000 confirmed virus cases and more than 14,400 deaths linked to the coronavirus. (Photo by Francisco Seco/AP Photo) 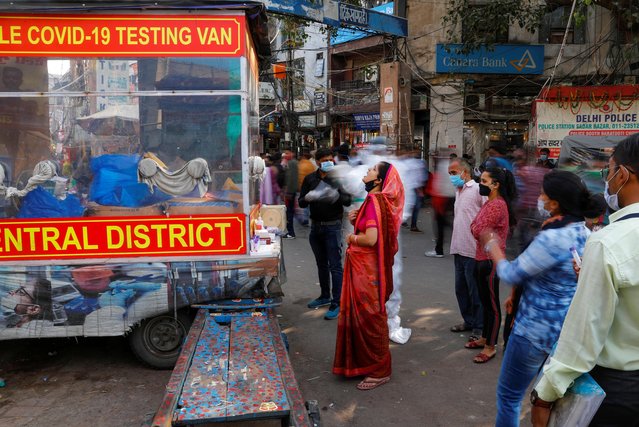 A healthcare worker wearing personal protective equipment (PPE) collects a swab sample from a woman amidst the spread of the coronavirus disease (COVID-19), at a wholesale market, in the old quarters of Delhi, India, November 17, 2020. Picture taken with slow shutter speed. (Photo by Adnan Abidi/Reuters) 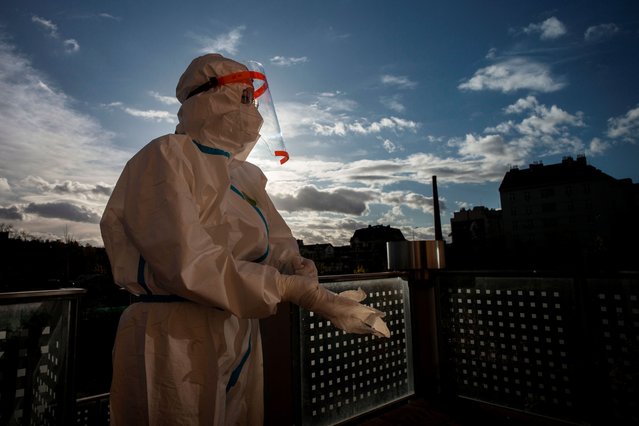 A medical worker wearing protective equipment puts on her gloves on the balcony of the nursing house on November 16, 2020 in Prague. The Czech Republic confirmed 1,887 COVID-19 cases on Sunday, which is the lowest daily rise since October 5, according to the latest data that the Health Ministry released on its website today. (Photo by Michal Cizek/AFP Photo) 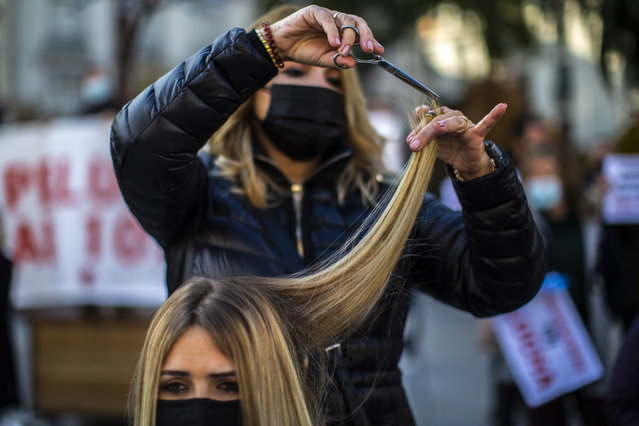 A hairdresser cuts the hair of a woman as part of a protest of hairdressing and aesthetics sector in front of the Spanish parliament in Madrid, Spain, Tuesday, November 17, 2020. Although curfews and restrictions to travel between regions are pretty much widespread, Madrid has managed to bend the curve of contagion while keeping most commercial activity running while northeastern Catalonia has kept bars and restaurants closed for over a month now. (Photo by Manu Fernandez/AP Photo)
Edit Del
19 Nov 2020 00:07:00, post received 0 comments
Publication archive:
←   →
Popular tags:
All tags
Last searches: