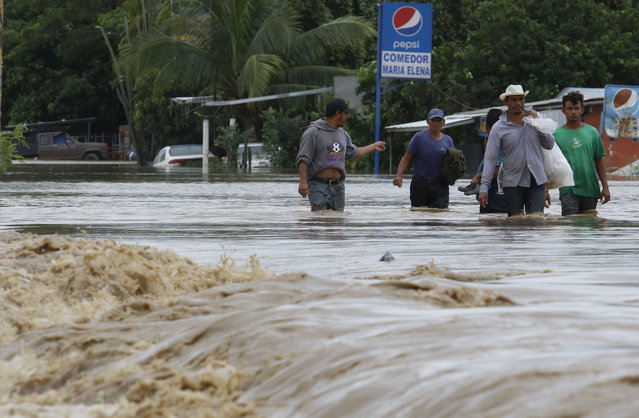 Men wade through a street flooded after the passing of Hurricane Iota in La Lima, Honduras, Wednesday, November 18, 2020. Iota flooded stretches of Honduras still underwater from Hurricane Eta, after it hit Nicaragua Monday evening as a Category 4 hurricane and weakened as it moved across Central America, dissipating over El Salvador early Wednesday. (Photo by Delmer Martinez/AP Photo) 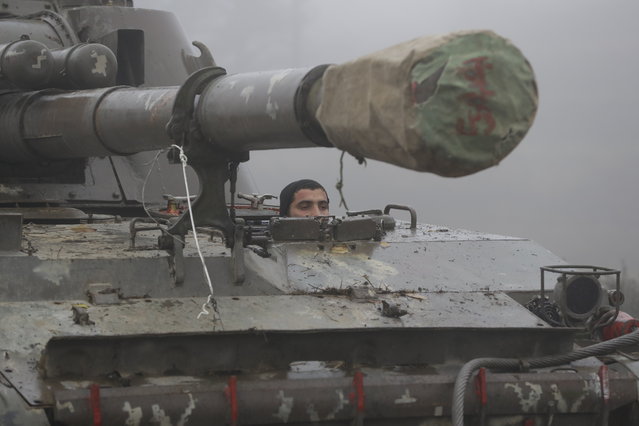 An Armenian soldier drives a self-propelled artillery unit during the withdrawal of Armenian troops from the separatist region of Nagorno-Karabakh, Wednesday, November 18, 2020. A Russia-brokered cease-fire to halt six weeks of fighting over Nagorno-Karabakh stipulated that Armenia turn over control of some areas it holds outside the separatist territory's borders to Azerbaijan. Armenians are forced to leave their homes before the region is handed over to control by Azerbaijani forces. (Photo by Sergei Grits/AP Photo) 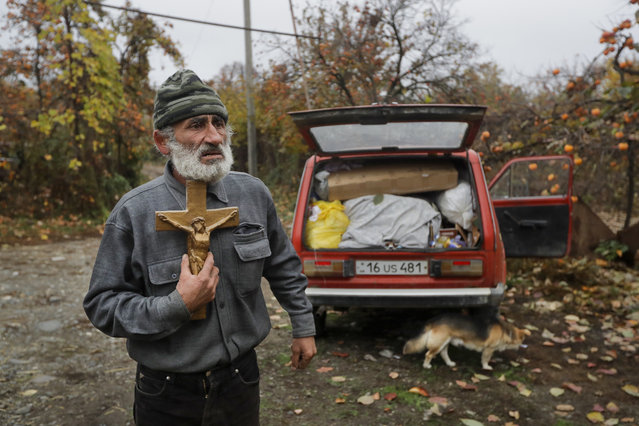 Nikolai Karapetyan reacts and presses the cross to his chest, with his car packed as he prepares to abandon his home in the village of Maraga, in the Martakert area, in the separatist region of Nagorno-Karabakh, Wednesday, November 18, 2020. (Photo by Sergei Grits/AP Photo) 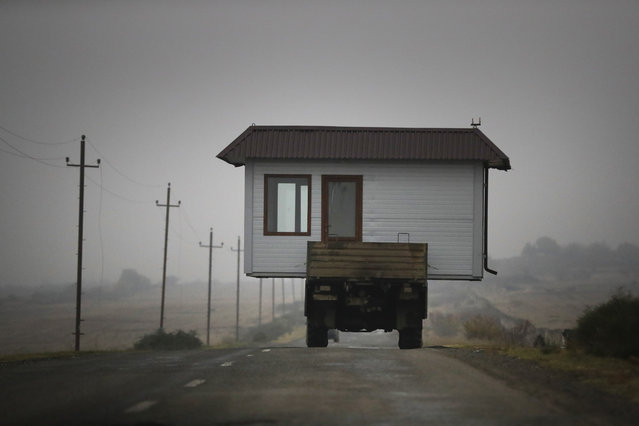 A family drives a truck loaded with a small house along a highway as they leave their home village in the separatist region of Nagorno-Karabakh, Wednesday, November 18, 2020. (Photo by Sergei Grits/AP Photo) 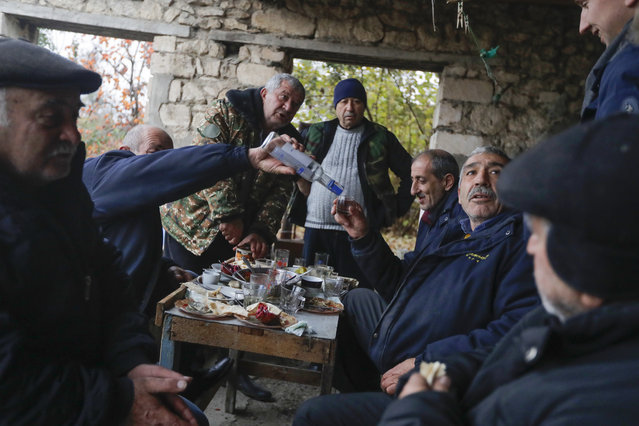 Ethnic Armenians drink vodka during their last dinner before leaving their homes in the village of Maraga, in the Martakert area, in the separatist region of Nagorno-Karabakh, Wednesday, November 18, 2020. (Photo by Sergei Grits/AP Photo) 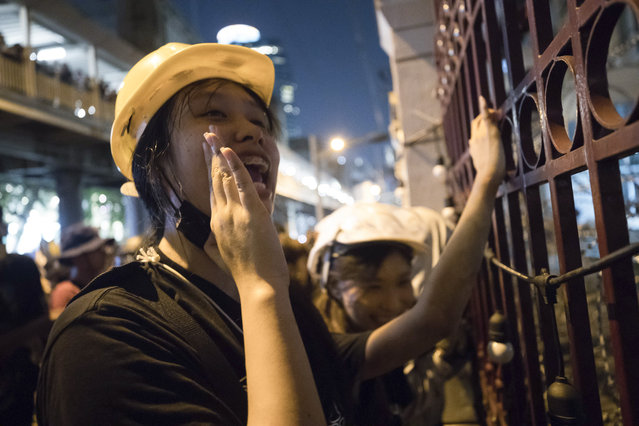 Pro-democracy protesters shout slogans outside Police headquarters during a rally in Bangkok, Thailand, Wednesday, November 18, 2020. Police in Thailand's capital braced for possible trouble Wednesday, a day after a protest outside Parliament by pro-democracy demonstrators was marred by violence that left dozens of people injured. (Photo by Wason Wanichakorn/AP Photo) 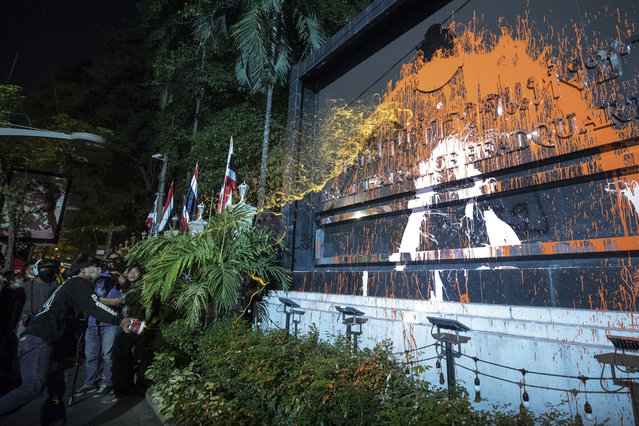 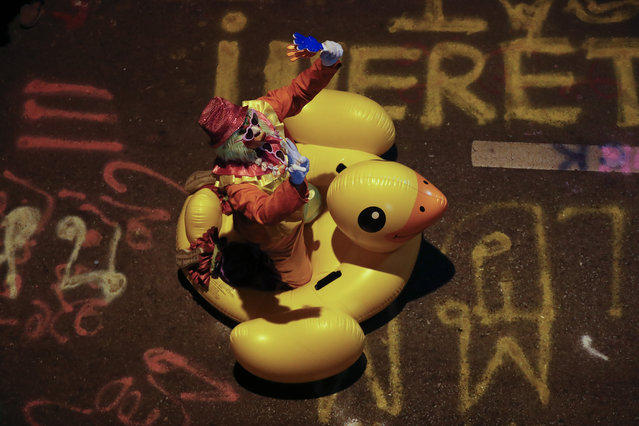 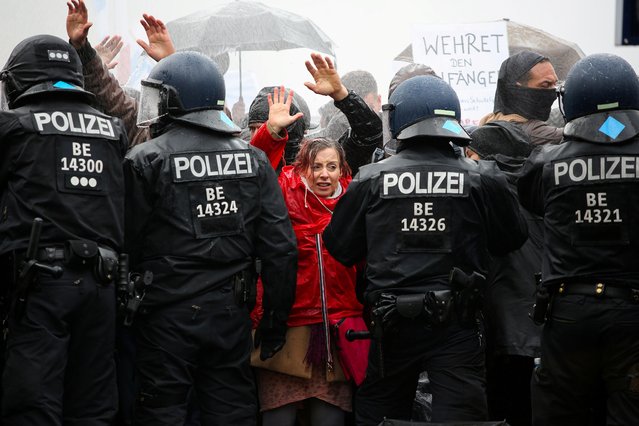 Demonstrators put up their hands in front of police officers during a protest against the government's coronavirus disease (COVID-19) restrictions, near the Brandenburger Gate in Berlin, November, 18, 2020. (Photo by Christian Mang/Reuters) 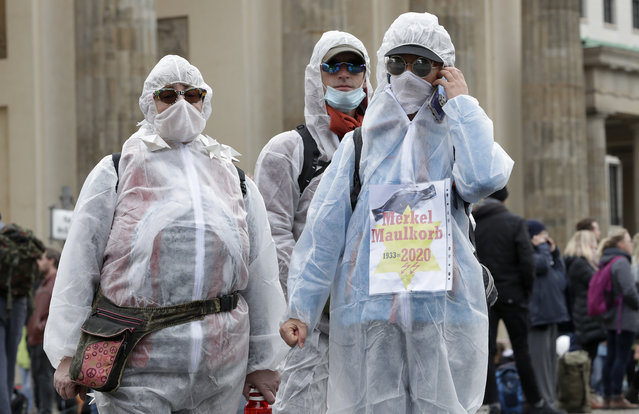 People attend a protest rally in front of the Brandenburg Gate in Berlin, Germany, Wednesday, November 18, 2020 against the coronavirus restrictions in Germany. Police in Berlin have requested thousands of reinforcements from other parts of Germany to cope with planned protests by people opposed to coronavirus restrictions. Slogan reads “Merkel Muzzle 1933-2020”. (Photo by Michael Sohn/AP Photo) 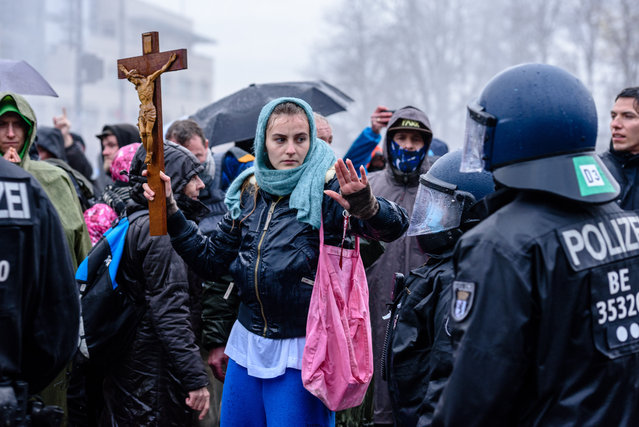 A woman with a large cross decorated with a Jesus figure during the use of water cannons by the police after heterogeneous groups around Corona deniers, conspiracy theorists and right-wing extremists called for blocking access to German Government Buildings in Berlin, Germany on November 18, 2020. Both the Bundestag and the Bundesrat vote on planned new regulations of the infection protection law. (Photo by Jan Scheunert/ZUMA Wire/Rex Features/Shutterstock) 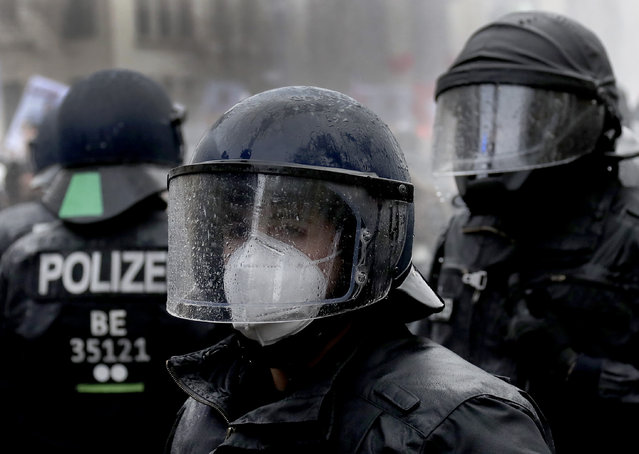 A police person wears a face mask under a helmet after beeing hit by a water canon during a violent protest ralley in a road between the Brandenburg Gate and the Reichstag building, home of the German federal parliament, in Berlin, Germany, Wednesday, November 18, 2020 against the coronavirus restrictions in Germany. Police in Berlin have requested thousands of reinforcements from other parts of Germany to cope with planned protests by people opposed to coronavirus restrictions. (Photo by Michael Sohn/AP Photo) 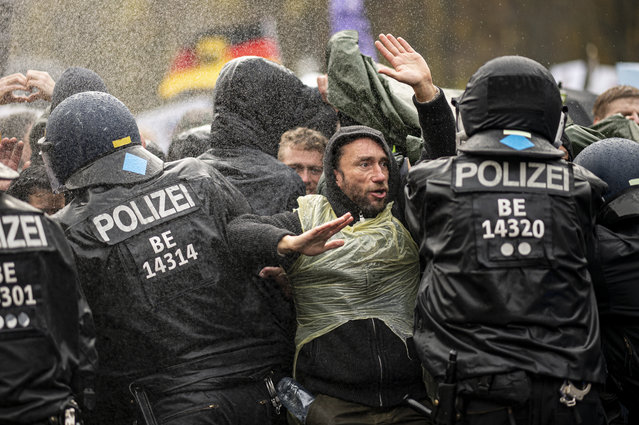 Police officers try to push back protesters on a blocked a road between the Brandenburg Gate and the Reichstag building, home of the German federal parliament, as people attend a protest rally in front of the Brandenburg Gate in Berlin, Germany, Wednesday, Nov. 18, 2020 against the coronavirus restrictions in Germany. (Photo by Fabian Sommer/dpa via AP Photo) 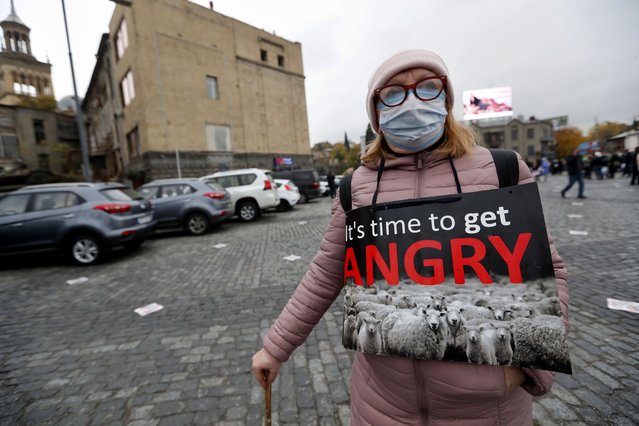 A woman attends an opposition rally in Tbilisi, Georgia, 18 November 2020, on the day of US Secretary of State Mike Pompeo's visit to Tbilisi. Members of Georgian opposition protest against the results of the election and demand new parliamentary election in Georgia. (Photo by Zurab Kurtsikidze/EPA/EFE) 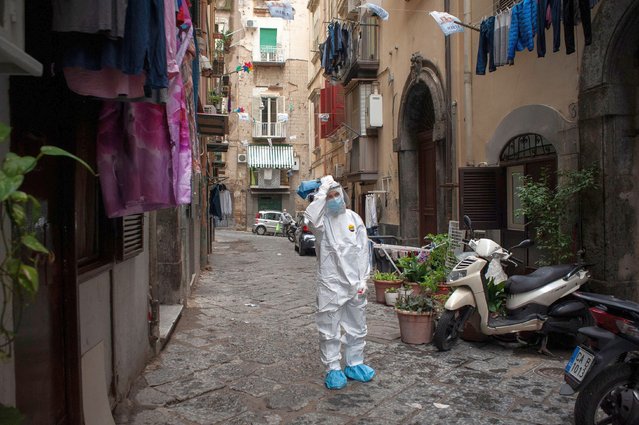 A healthcare worker wearing a protective suit walks through the Quartieri Spagnoli (Spanish Quarters) to screen people for coronavirus (Covid-19) during the pandemic in Naples, Italy on November 17, 2020. Medical workers collect swab samples from a popular area called Quartieri Spagnoli (Spanish Quarters) in Naples during the red-zone period. Home testing and the establishment of multiple Special Assistential Continuity Units (U.S.C.A.) should have been implemented for the second wave, especially for those living in highly dense populated area and low income. (Photo by Valeria Ferraro/SOPA Images/Rex Features/Shutterstock) 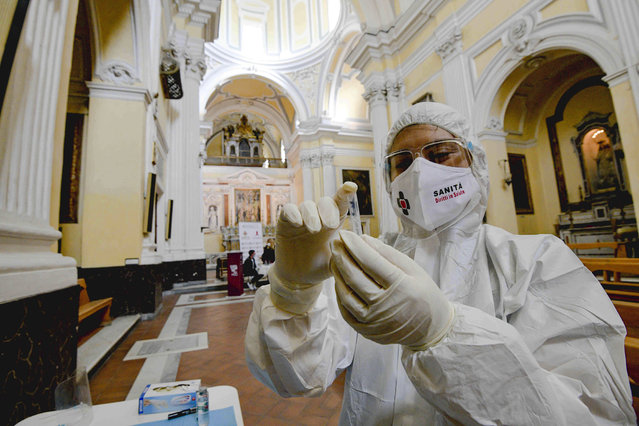 A medical operator prepares to perform COVID-19 test swabs in the Church of San Severo Outside the Walls, in the heart of Naples, Italy, Wednesday, November 18, 2020. An initiative of “Sanita' Diritti Salute” association and the San Gennaro Foundation, aimed at helping those who cannot afford the cost of a private test, also allows, in the best tradition of Naples, those who want to pay 18 euros for a “suspended swab”, to be taken by somebody else, exactly as it happens for the famous Neapolitan “suspended coffee”. (Photo by Alessandro Pone/LaPresse via AP Photo) 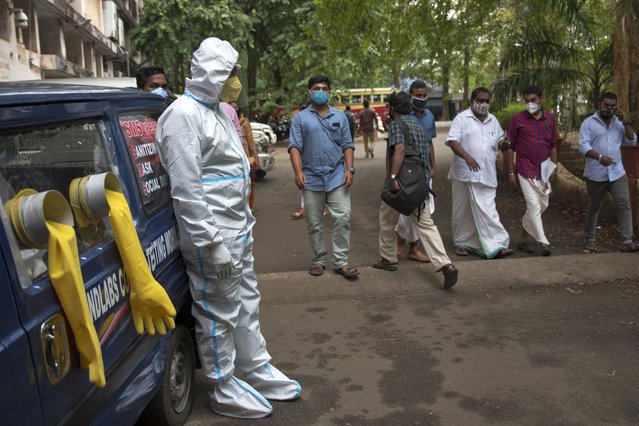 A man in protective suit stands next to a mobile COVID-19 testing kiosk outside the Ernakulam district administration headquarters in Kochi, Kerala state, India, Wednesday, November 18, 2020. A country of nearly 1.4 billion people, India is the world's second most coronavirus affected country after the United States. (Photo by R.S. Iyer/AP Photo) 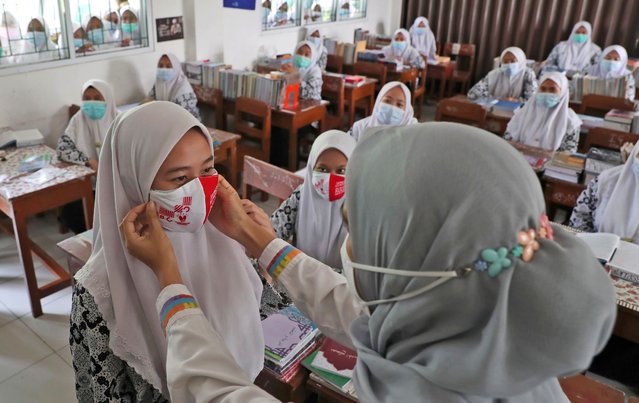 A public health official shows how to properly wear face masks to students during a class teaching health protocols for curbing the spread of coronavirus outbreak at the Daarul Rahman Islamic Boarding School in Jakarta, Indonesia, Wednesday, November 18, 2020. (Photo by Tatan Syuflana/AP Photo) 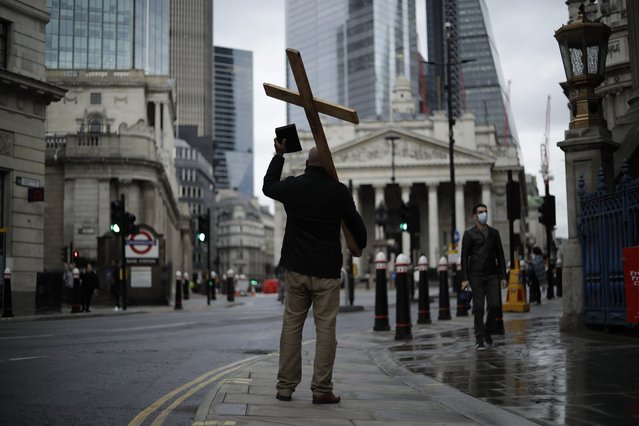 A man holding a cross and a Bible preaches about Christianity backdropped by the Royal Exchange, back center, and the Bank of England, at left, during England's second coronavirus lockdown in the City of London financial district of London, Wednesday, November 18, 2020. Britain yesterday posted 598 COVID-19 deaths of people testing positive for the virus in the last 28 days, the highest daily death toll since May. (Photo by Matt Dunham/AP Photo)
Edit Del
20 Nov 2020 00:07:00, post received 0 comments
Publication archive:
←   →
Popular tags:
All tags
Last searches: