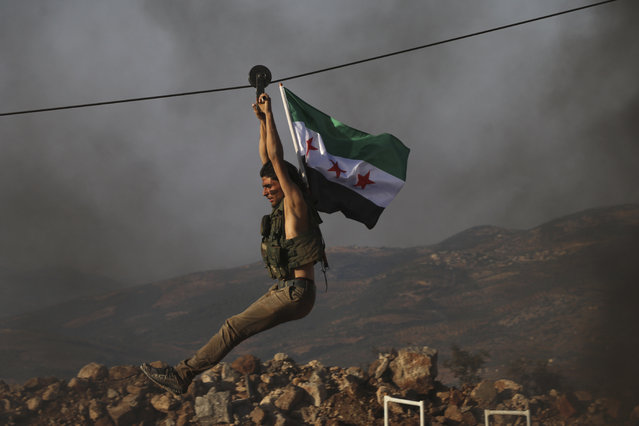 In this Monday October 7, 2019 photo, a Turkish-backed fighter from the Free Syrian Army, exercises with his group's flag during military training in preparation for an anticipated Turkish incursion targeting Syrian Kurdish fighters, near Azaz, in north Syria. Turkey's vice president said Tuesday his country won't bow to threats in an apparent response to U.S. President Donald Trump who warned Ankara about the scope of its planned military incursion into northeast Syria. (Photo by AP Photo) 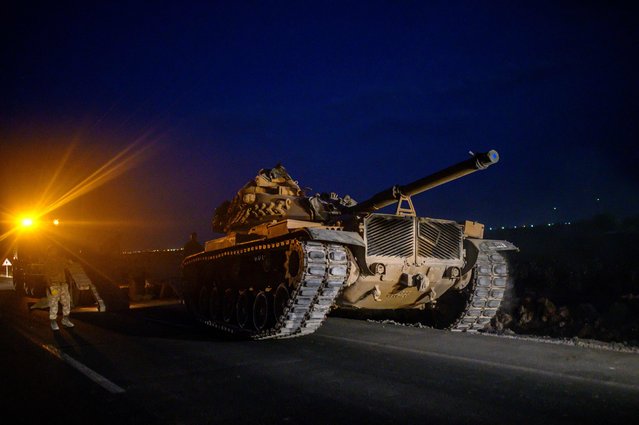 A Turkish army's tank drives towards the border with Syria near Akcakale in Sanliurfa province on October 8, 2019. Turkey said on October 8, 2019, it was ready for an offensive into northern Syria, while President Donald Trump insisted the United States had not abandoned its Kurdish allies who would be targeted in the assault. Trump has blown hot and cold since a surprise announcement two days before that Washington was pulling back 50 to 100 “special operators” from Syria's northern frontier. (Photo by Bulent Kilic/AFP Photo) 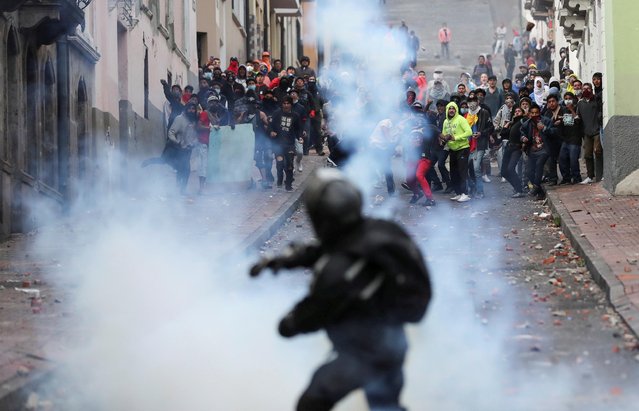 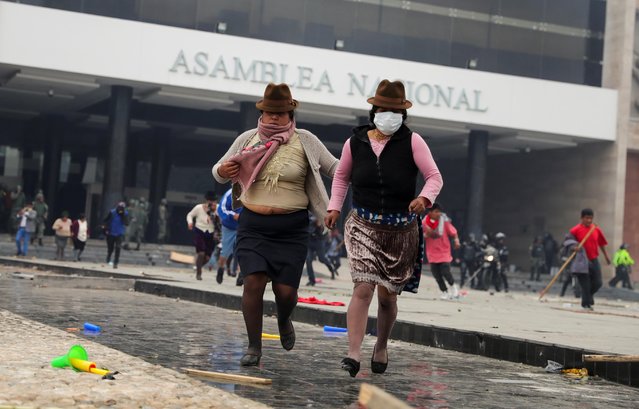 Demonstrators run at the entrance of the National Assembly building, during a protest against Ecuador's President Lenin Moreno's austerity measures in Quito, Ecuador, October 8, 2019. (Photo by Ivan Alvarado/Reuters) 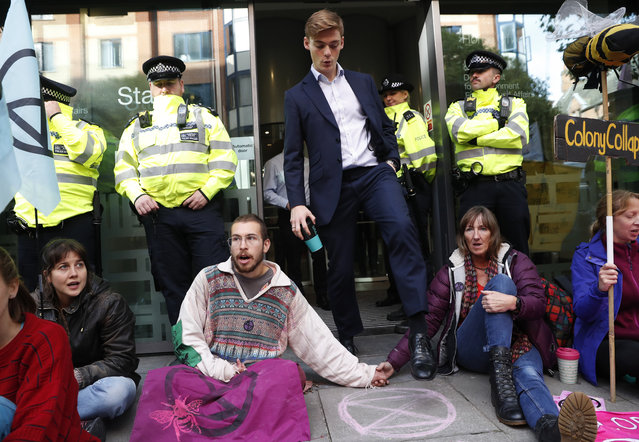 A man walks out of the Home office past climate change protesters on the second day of ongoing protests in London, Tuesday, October 8, 2019. Police are reporting they have arrested more than 300 people at the start of two weeks of protests as the Extinction Rebellion group attempts to draw attention to global warming. (Photo by Alastair Grant/AP Photo) Environmentalist performance art troupe the “Red Rebel Brigade” perform before a police officer, during the environmental protest by Extinction Rebellion activist group in London, UK on October 8, 2019. Extinction Rebellion is an international movement that uses non-violent civil disobedience in an attempt to halt mass extinction and minimise the risk of social collapse. The group has blocked a number of key junctions in central London. (Photo by Rahman Hassani/SOPA Images/Rex Features/Shutterstock) 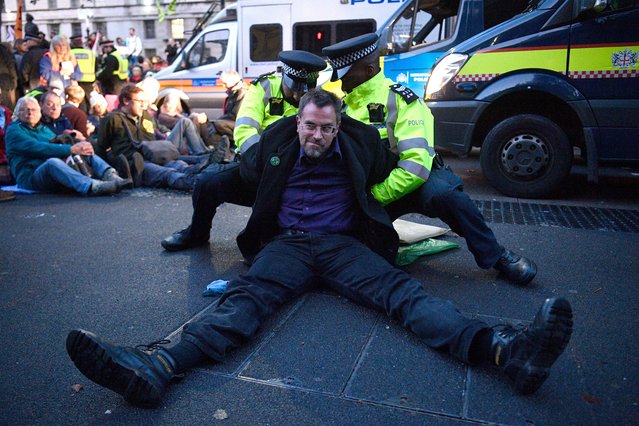 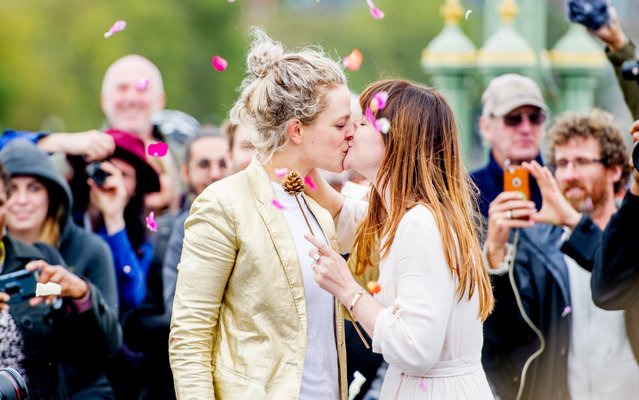 An Extinction Rebellion environmental activist couple getting married at an action site they are calling “The Beacon” on Westminster Bridge on October 7, 2019 in London, England. Primarily made up of London based activists the site is one of 12 situated around key Government locations in central London as actions are also predicted to occur in unto 70 cities around the world. The group aim to occupy the areas in central London for up to two weeks through non violent protest with an estimated 8 times as many people as their April protests which saw over 1,200 people arrested. (Photo by Ollie Millington/Getty Images) 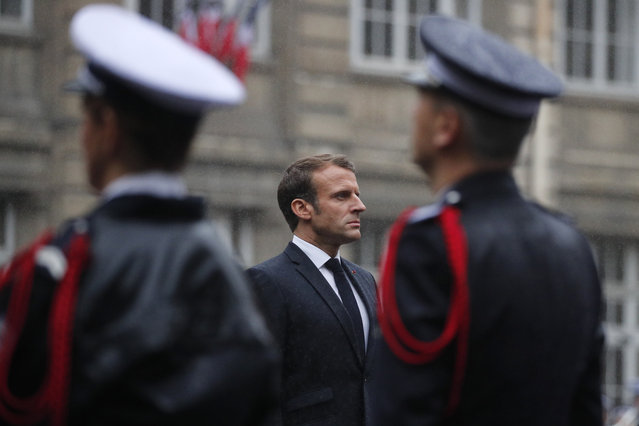 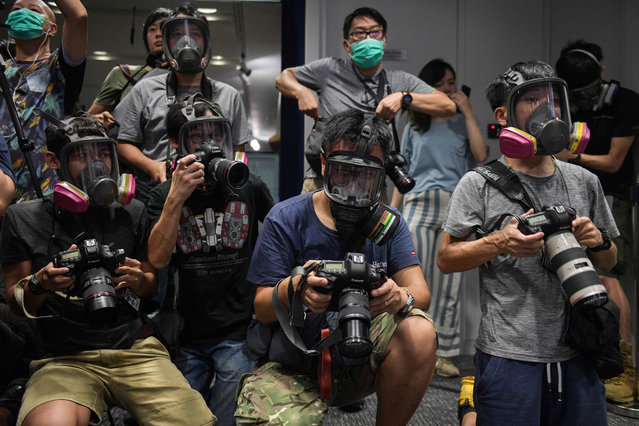 Photojournalists wearing protective masks attend a police press conference in Hong Kong on October 8, 2019. The financial hub has been gripped by four months of rallies, and last weekend saw much of the city grind to a halt as masked demonstrators took to the streets in defiance of a controversial ban on face coverings. (Photo by Nicolas Asfouri/AFP Photo) 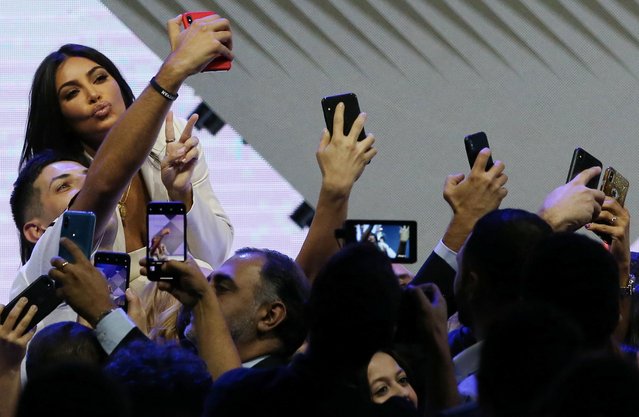 US reality television star Kim Kardashian poses for a selfie in Yerevan on October 7, 2019. The US reality television star Kim Kardashian on October 7, 2019 baptised her children during a visit to her ancestral homeland Armenia. The visit was the star's first to the Caucasus nation since a 2015 trip marking the centenary of the Armenian genocide that saw her husband give a chaotic, impromptu concert in capital Yerevan. (Photo by Vahram Baghdasaryan/Reuters/Photolure) 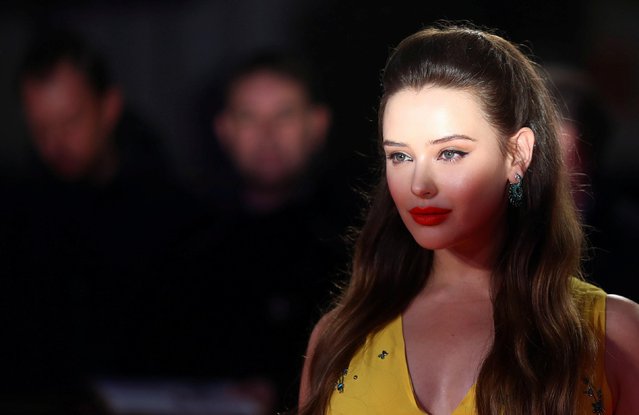