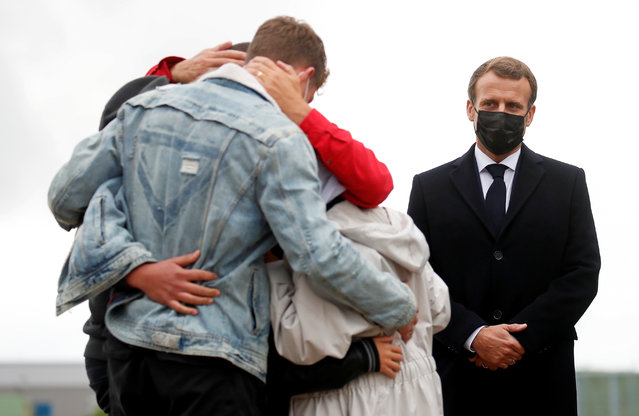 French President Emmanuel Macron (R) stands next to French aid worker Sophie Petronin (C) who is welcomed by her family after suspected jihadist hostage-takers freed the 75-year-old from nearly four years of captivity in Mali upon her arrival at the Villacoublay military airport near Paris on October 9, 2020. Petronin was released along with a top Malian politician and two Italian hostages late on October 8, 2020. The last French citizen known to have been held hostage anywhere in the world since her abduction in 2016, a white-robed Petronin was embraced by her son as she touched down in Mali's capital, Bamako. (Photo by Gonzalo Fuentes/Pool via AFP Photo) 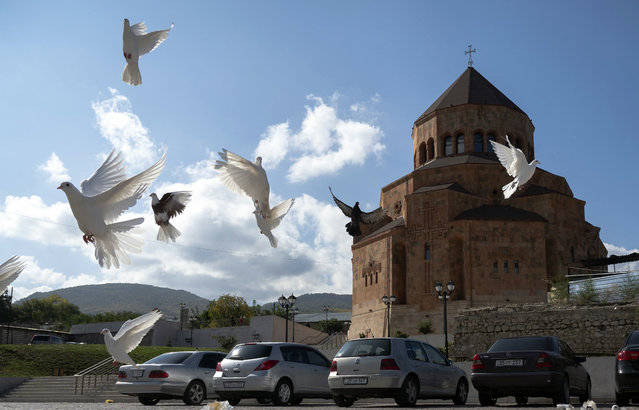 Pigeons fly near Holy Mother of God Cathedral in Stepanakert during a military conflict in the separatist region of Nagorno-Karabakh, Friday, October 9, 2020. Armenia and Azerbaijan say they have agreed to a cease-fire in Nagorno-Karbakh starting at noon Saturday. (Photo by AP Photo/Stringer) 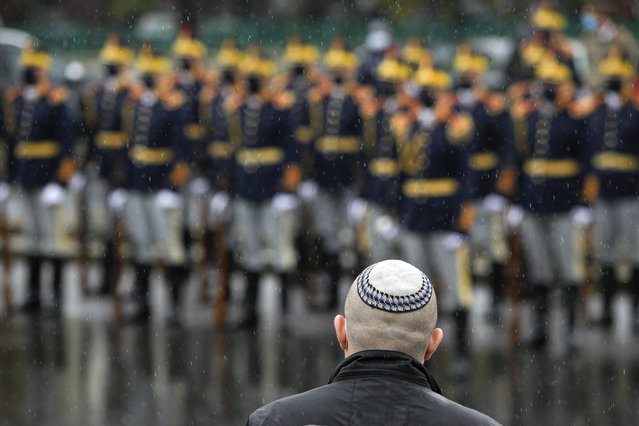 Silviu Vexler, a member of parliament representing the Jewish community speaks, backdropped by members of an honor guard, wearing masks for protection against the COVID-19 infection, outside the Holocaust memorial during the National Holocaust Remembrance Day commemorations in Bucharest, Romania, Friday, October 9, 2020, the day when, in 1941, the deportations of Jews and Roma began in the country. About 280,000 Romanian Jews and 11,000 Romanian Roma, or Gypsies, were deported and killed during WWII when Romania was ruled by a pro-nazi regime. (Photo by Vadim Ghirda/AP Photo) 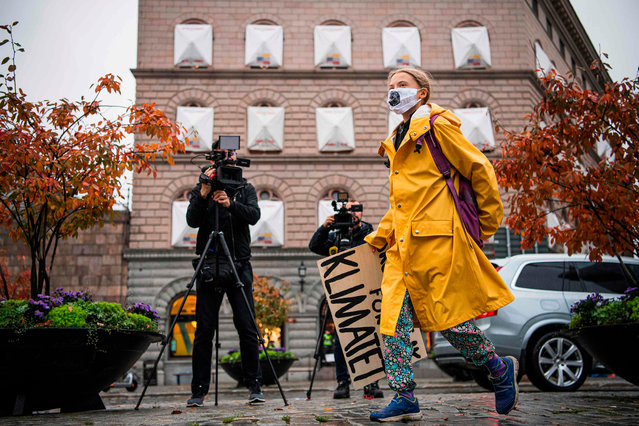 Swedish climate activist Greta Thunberg arrives with her placard reading “School strike for climate” to stage a Fridays for Future protest in front of the Swedish Parliament Riksdagen in Stockholm on October 9, 2020. (Photo by Jonathan Nackstrand/AFP Photo) 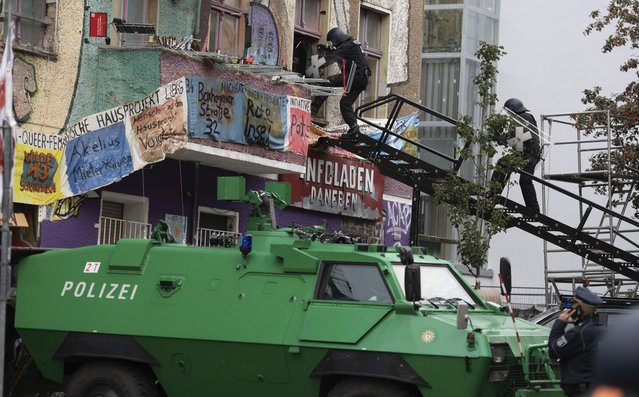 During the eviction, police officers use a turntable ladder to go through a window of the squatted house “Liebig 34” in Berlin, Germany, Friday, October 9, 2020. Police in heavy riot gear began clearing out a notorious Berlin leftist squat on Friday morning, encountering only passive resistance from residents as they carried them individually down a firetruck's ladder. Police spokesman at the scene Thilo Cablitz said some 1,500 police had been called out to aid in clearing the so-called Liebig 34 squat in the capital's Friedrichshain neighborhood, named after its address Liebigstrasse 34. (Photo by Christophe Gateau/dpa via AP Photo) 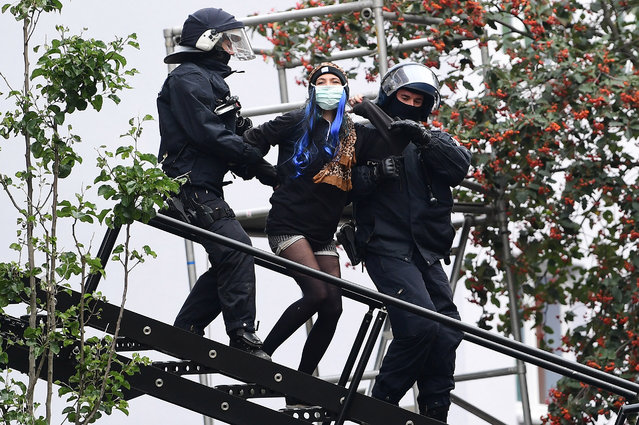 Police officers in action during the eviction of the “Liebig 34” squat, at Friedrichshain district in Berlin, Germany, 09 October 2020. A local court ruled in favor of the eviction of the self-declared “anarcha-queer feminist” house project at Liebig street 34 in June 2020. The house project is considered a stronghold of the left-wing scene in the German capital. (Photo by Filip Singer/EPA/EFE) 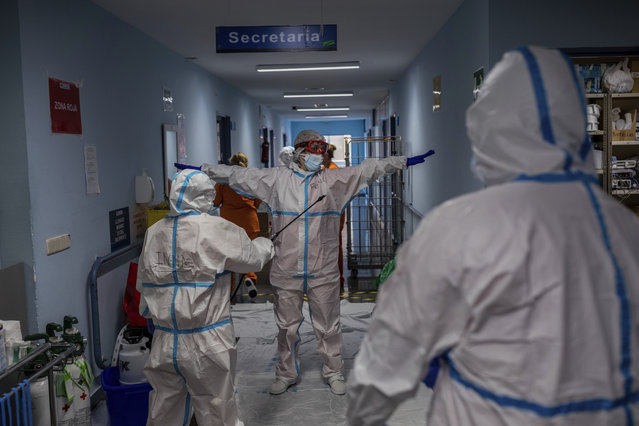 A medical team member is disinfected before leaving the COVID-19 ward at the Severo Ochoa hospital in Leganes, outskirts of Madrid, Spain, Friday, October 9, 2020. At the peak of the first wave, ICU wards were given over to haste, desperation and even cluelessness about what to do. Now, a well-oiled machinery saves some lives and loses others to coronavirus, but without the doomsday atmosphere of March and April. (Photo by Bernat Armangue/AP Photo) 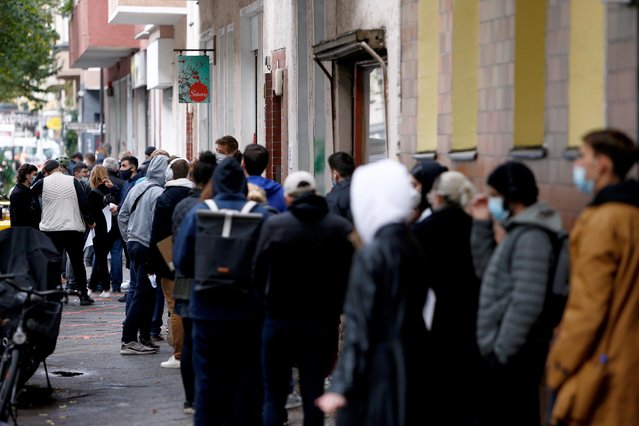 People queue in front of a doctor's practice to get a coronavirus disease (COVID-19) test in Berlin, Germany, October 9, 2020. Cases throughout Europe have been steadily rising over the past week even as new infections in worst-affected countries such as India and Brazil have shown signs of slowing down. (Photo by Michele Tantussi/Reuters) 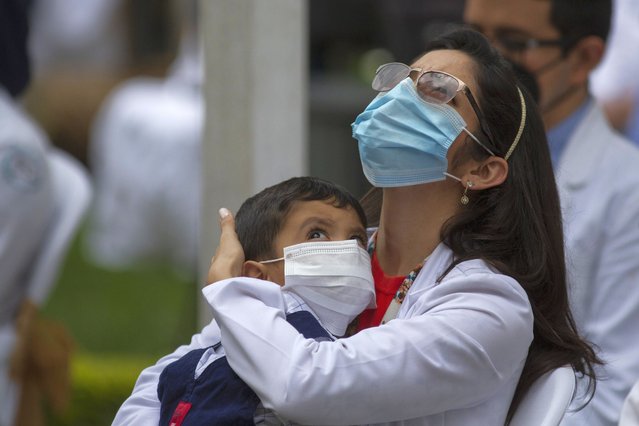 A health worker at the San Juan de Dios hospital holds a child during a minute of silence in memory of her colleagues who have fallen victim to COVID-19 in Guatemala City, Friday, October 9, 2020. (Photo by Moises Castillo/AP Photo) 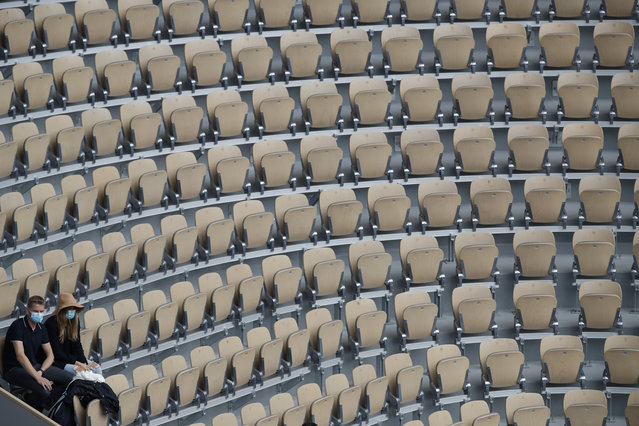 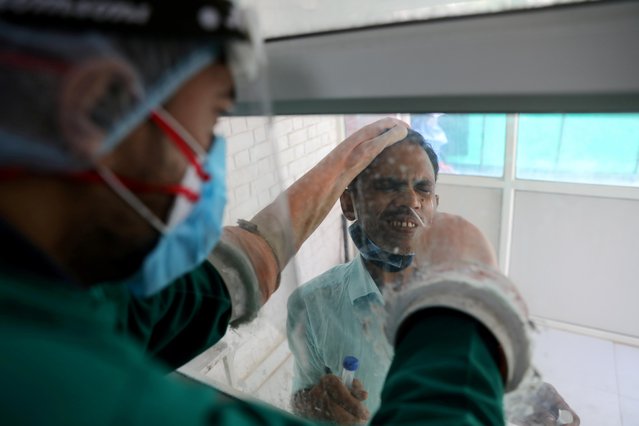 A healthcare worker collects a swab sample from a man amidst the spread of the coronavirus disease (COVID-19), at a testing centre, in New Delhi, India October 9, 2020. (Photo by Anushree Fadnavis/Reuters) 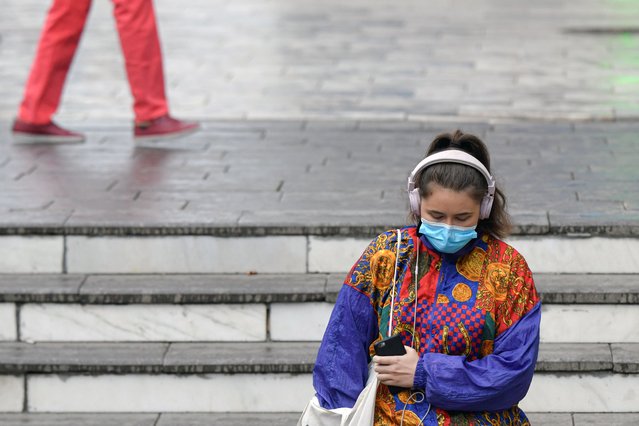 A woman wears a mask for protection against COVID-19 while going into a subway station in Bucharest, Romania, Thursday, October 8, 2020. The Czech government announced further restrictions in efforts to contain the coronavirus pandemic in the hardest hit country in Central and Eastern Europe. Thursday's announcement comes amid a record surge of infections that has been also recorded in most other countries across the region. Among others, all theaters, cinemas and zoo parks will be closed for at least two weeks. All sports indoor activities will be banned. (Photo by Andreea Alexandru/AP Photo) 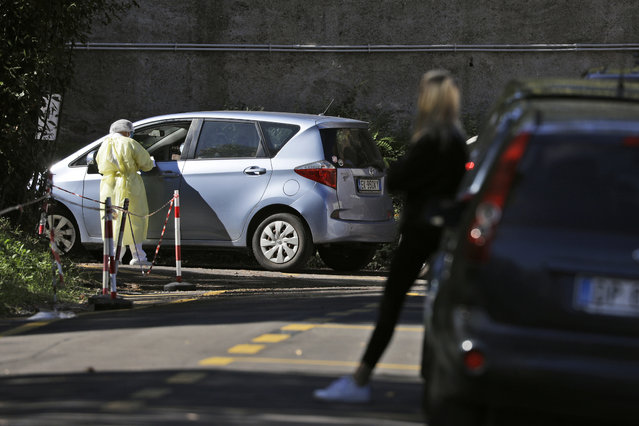 People line up outside San Giovanni hospital to get tested for COVID-19, in Rome on October 8, 2020. Europe’s second wave of coronavirus infections has struck well before flu season even started. People waited in line for 8-10 hours to get tested, while front-line medics from Kiev to Paris found themselves once again pulling long, short-staffed shifts in overcrowded wards. (Photo by Gregorio Borgia/AP Photo) 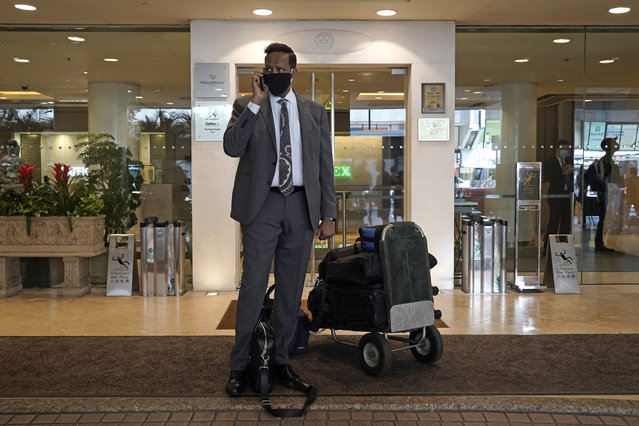 A hotel guest wearing a face mask, waits for transportation after checking out of the Royal Garden Hotel in Hong Kong, Friday, October 9, 2020. The Royal Garden Hotel was evacuating all of its guests after the government confirmed that a waiter who worked at a Vietnamese restaurant at the hotel was found to have the coronavirus COVID-19. (Photo by Kin Cheung/AP Photo) 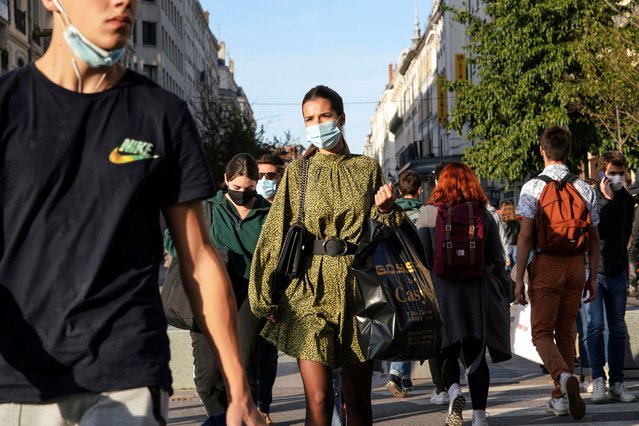 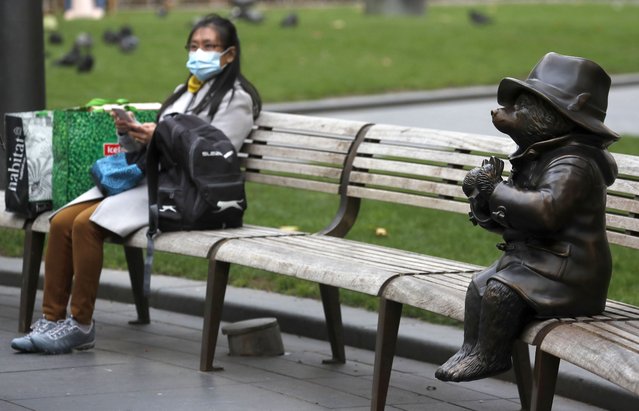 A woman rests sits with shopping next to a statue of Paddington Bear in London, Friday, October 9, 2020. The British economy grew by far less than anticipated during August, raising concerns that the recovery from the coronavirus recession was already stuttering even before the reimposition of an array of lockdown restrictions. (Photo by Frank Augstein/AP Photo) 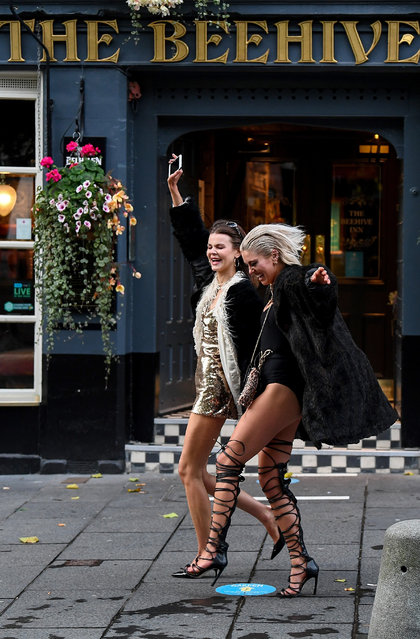 Two women walk past The Beehive pub in the Grassmarket following pubs closing at 6pm on October 9, 2020 in Edinburgh, Scotland. Pubs and restaurants in the central belt of Scotland close their doors for a fortnight while from 6pm in tough new coronavirus measures set out by the Scottish Government. (Photo by Jeff J. Mitchell/Getty Images) 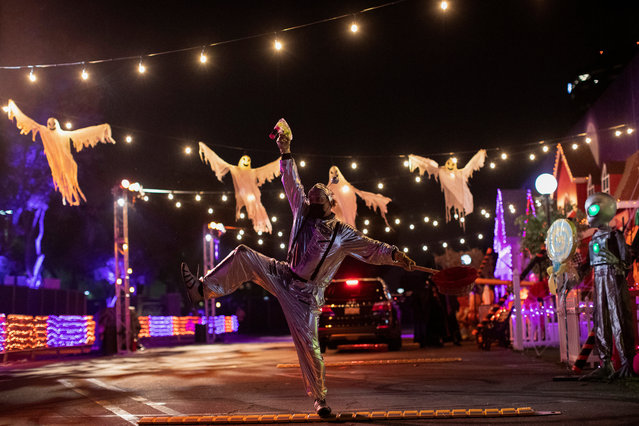