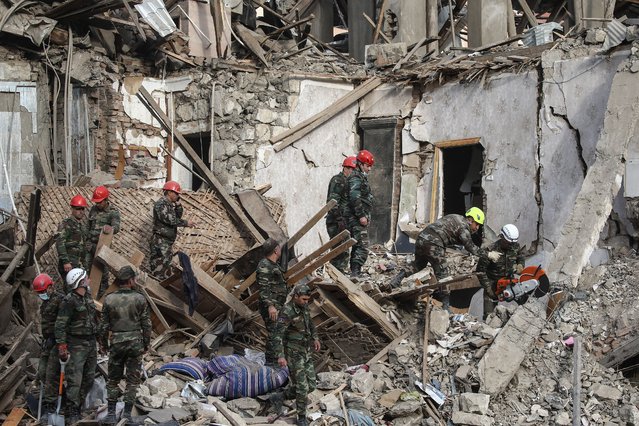 Search and rescue operations continue among debris of houses after Armenian army's alleged attacks with long-range missiles, on October 11, 2020 in Ganja city of Azerbaijan. The Armenian army continues to target civilian settlements, far from Azerbaijan's front line. It is reported that at least 5 people were killed and 28 others were injured in Ganja. (Photo by Onur Coban/Anadolu Agency via Getty Images) 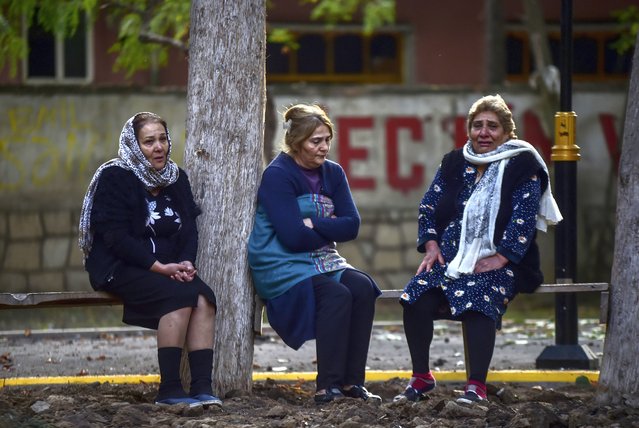 Women sit outside their damaged houses after rocket fire overnight by Armenian forces, early Sunday, October 11, 2020, in a residential area in Ganja, Azerbaijan's second largest city, near the border with Armenia. Several civilians were killed and dozens were wounded. Russian President Vladimir Putin brokered a cease-fire on Friday in a series of calls with President Ilham Aliyev of Azerbaijan and Armenia's Prime Minister Nikol Pashinian. (Photo by Ismail Coskun/IHA via AP Photo) 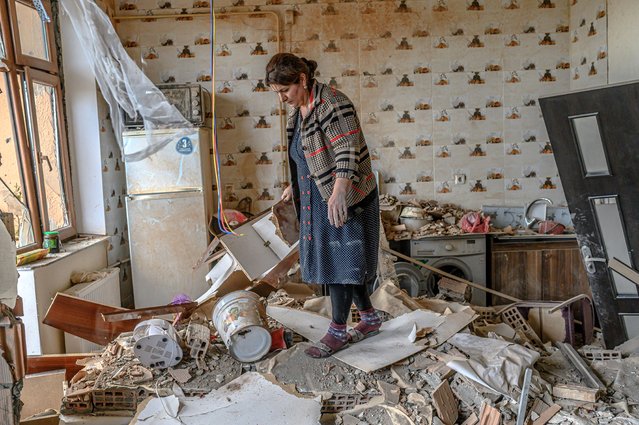 Xatire Celilova walks in the kitchen of her destroyed house following a ceasefire during a military conflict between Armenia and Azerbaijan over the breakaway region of Nagorno-Karabakh, in the town of Terter, Azerbaijan, on October 10, 2020. Armenia and Azerbaijan traded accusations of new attacks on October 10 in breach of a ceasefire deal to end nearly two weeks of heavy fighting over the disputed Nagorno-Karabakh region. (Photo by Bulent Kilic/AFP Photo) 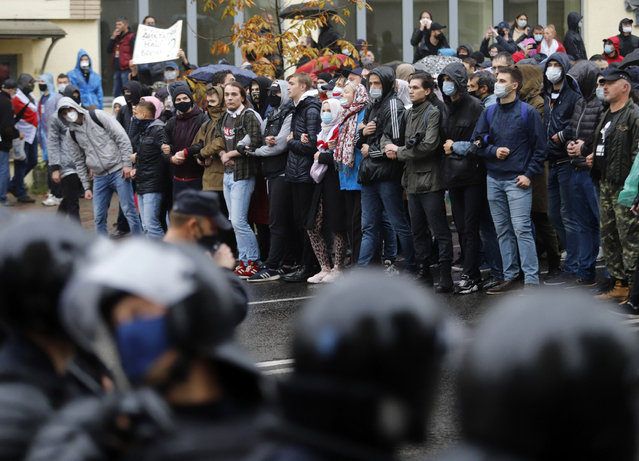 Belarusian opposition supporters block a street during a rally to protest the official presidential election results in Minsk, Belarus, Sunday, October 11, 2020. Belarus' authoritarian president Alexander Lukashenko on Saturday visited a prison to talk to opposition activists, who have been jailed for challenging his re-election that was widely seen as manipulated and triggered two months of protests. (Photo by AP Photo/Stringer) 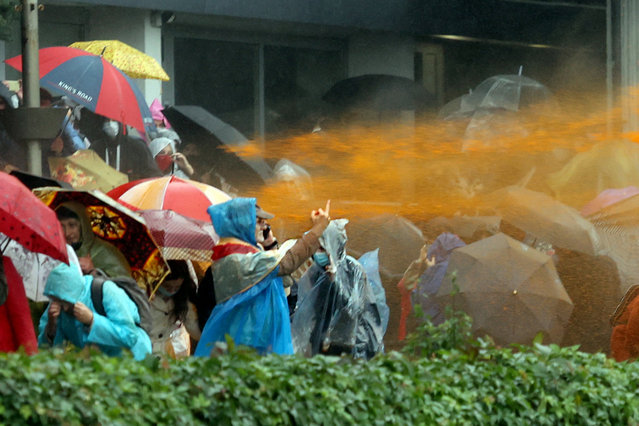 A protester gives the finger as police use a water cannon truck during a rally to protest against the Belarus presidential election results in Minsk on October 11, 2020. Riot police swiftly detained dozens at a protest march in Belarus on October 11 after strongman leader raised hopes for change by meeting jailed opposition figures. (Photo by AFP Photo/Stringer) 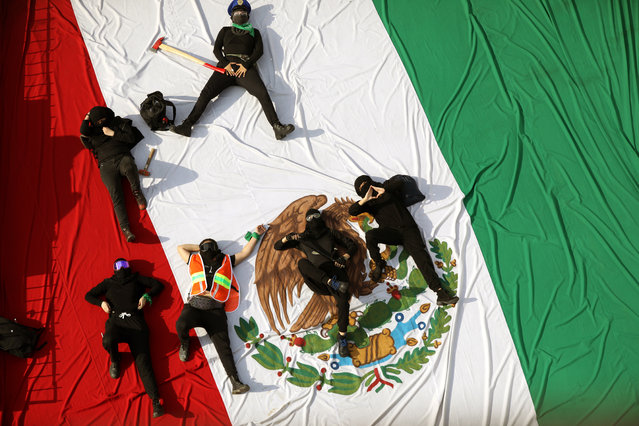 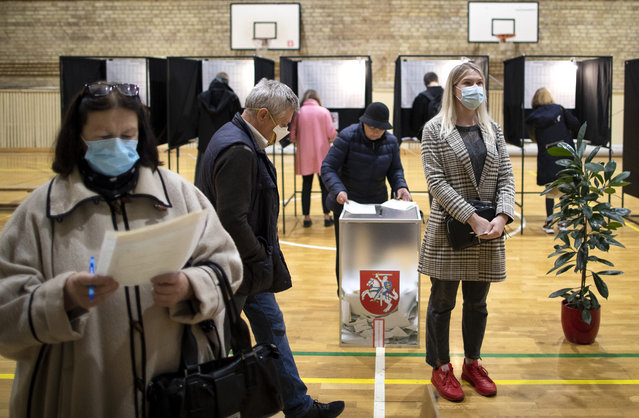 People wear face masks to protect against coronavirus as they cast their ballots during the parliamentary elections in Vilnius, Lithuania, Sunday, October 11, 2020. Polls opened Sunday for the first round of national election in Lithuania, where voters will renew the 141-seat parliament and the ruling four-party coalition is widely expected to face a stiff challenge from the opposition to remain in office. (Photo by Mindaugas Kulbis/AP Photo) 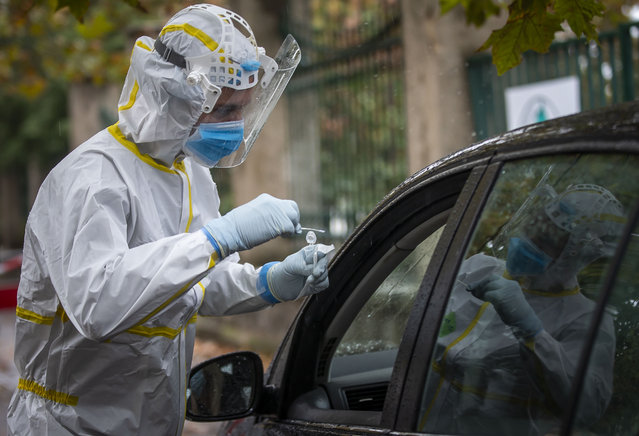 A health care worker conducts a COVID-19 test at a drive-in testing station on October 10, 2020 in Prague, Czech Republic. After relaxing almost all restrictive measures in the summer, the Czech government has responded to one of the worst spikes in European countries by declaring a state of emergency earlier this week. That has been accompanied by restrictions ranging from limiting public events to closing restaurants and pubs at 8pm. (Photo by Gabriel Kuchta/Getty Images) 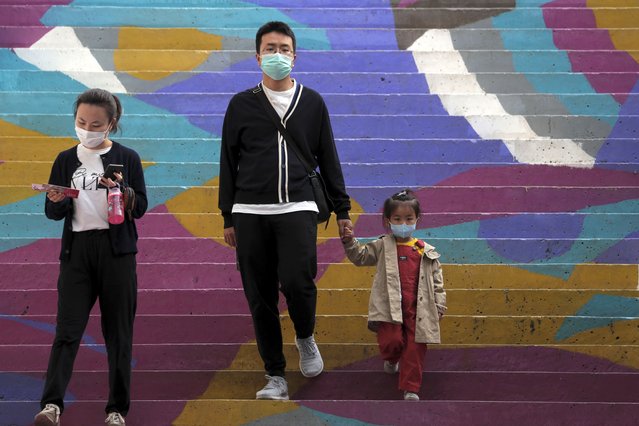 A family wearing face masks to help curb the spread of the coronavirus walk down a colourful staircase at a shopping mall in Beijing, Sunday, October 11, 2020. Even though the spread of COVID-19 has been all but eradicated in China, the pandemic is still surging across the globe with ever rising death toll. (Photo by Andy Wong/AP Photo) 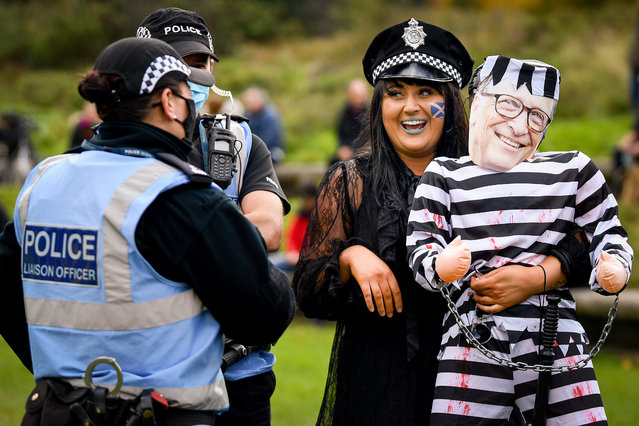 Protesters with placards gather outside the Scottish Parliament entrance to demonstrate against new coronavirus restrictions, face covering rules and the search for a virus on October 10, 2020 in Edinburgh, Scotland. The group, known as Saving Scotland, said “with the threats of more lockdowns and even further restrictions we must ensure we stand up for those who are losing their lives due to lack of treatment, losing their businesses, their jobs, for those in care homes, the children being masked and socially distanced in schools”. (Photo by Jeff J. Mitchell/Getty Images) 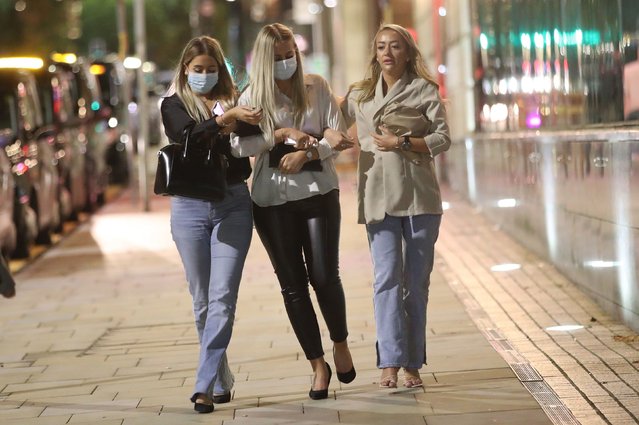 Three women out for the evening in Manchester on October 11, 2020, ahead of a possible government announcement on Monday. Cities in northern England and other areas suffering a surge in Covid-19 cases may have pubs and restaurants temporarily closed to combat the spread of the virus. (Photo by Danny Lawson/PA Images via Getty Images) 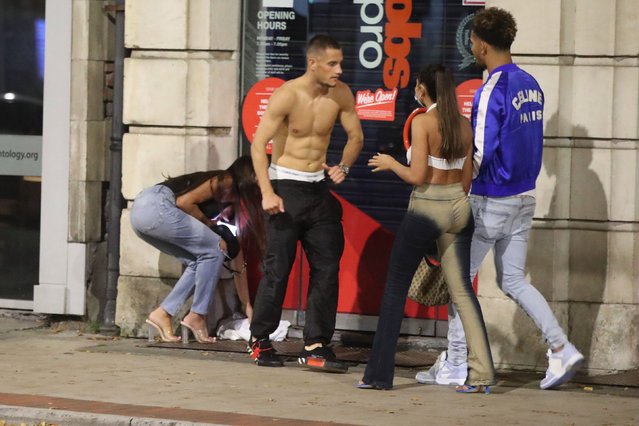 People out for the evening in Manchester, one man without a top on October 11, 2020, ahead of a possible government announcement on Monday. (Photo by Danny Lawson/PA Images via Getty Images) 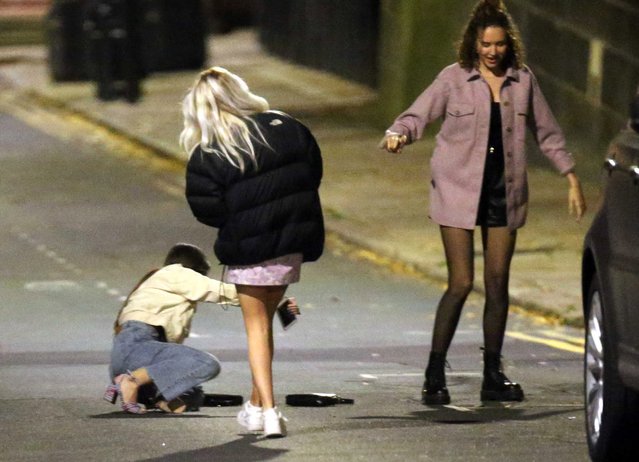 Revellers head out in Leeds city centre, which has one of the country's highest infection rates on October 11, 2020. (Photo by NB PRESS LTD/The Sun) 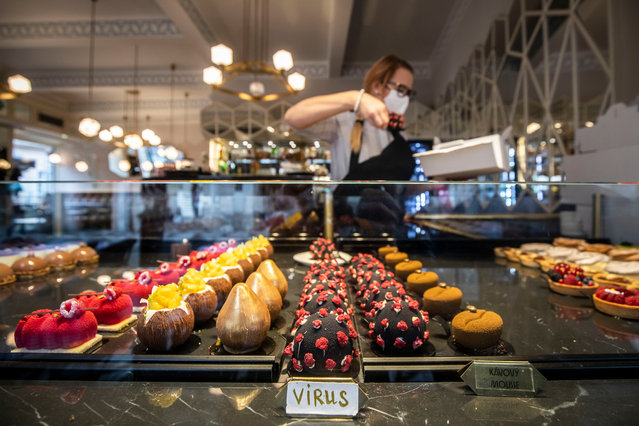 A waitress serves a dessert in shape of a coronavirus at a coffee shop on October 10, 2020 in Prague, Czech Republic. After relaxing almost all restrictive measures in the summer, the Czech government has responded to one of the worst spikes in European countries by declaring a state of emergency earlier this week. That has been accompanied by restrictions ranging from limiting public events to closing restaurants and pubs at 8pm. (Photo by Gabriel Kuchta/Getty Images)
Edit Del
13 Oct 2020 00:07:00, post received 0 comments
Publication archive:
←   →
Popular tags:
All tags
Last searches: