A man carries belongings from his damaged house two days after shelling by Armenian's artillery during fighting over the separatist region of Nagorno-Karabakh, in Ganja, Azerbaijan, Tuesday, October 13, 2020. Azerbaijan has accused Armenia of attacking large cities Sunday overnight in violation of the cease-fire deal brokered by Russia that seeks to end the worst outbreak of hostilities in the separatist Nagorno-Karabakh region. (Photo by Ismail Coskun/IHA via AP Photo) 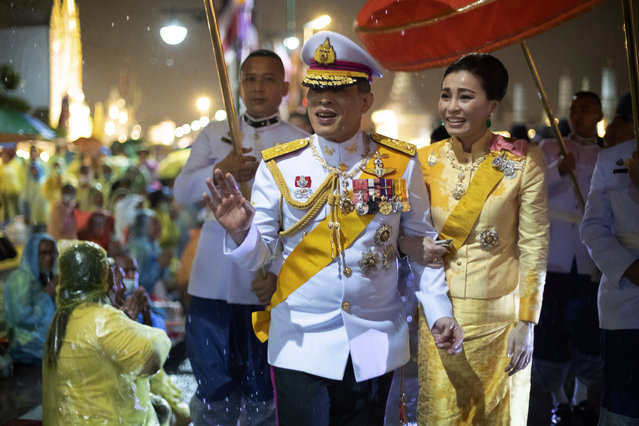 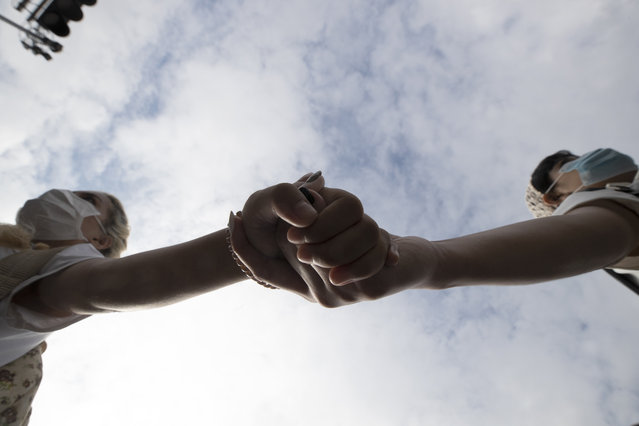 Anti-government protesters hold the hands for security during a protest near Democracy Monument in Bangkok, Thailand, Wednesday, October 14, 2020. Thai political activists hope to keep up the momentum for their campaign for democratic change with their third major rally in the capital Bangkok on Wednesday. (Photo by Sakchai Lalit/AP Photo) 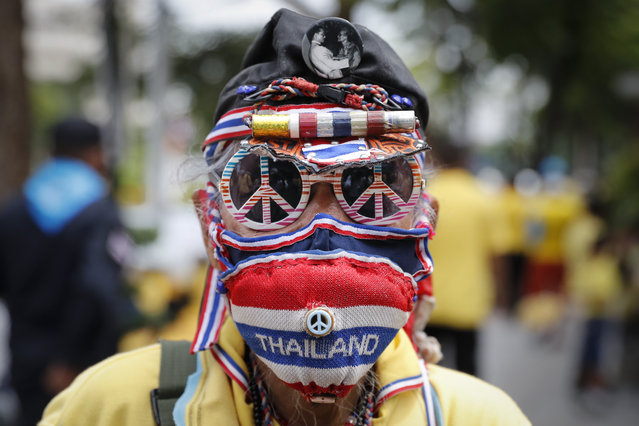 A supporter of the Thai monarchy disguises himself during a rally in Bangkok, Thailand, Wednesday, October 14, 2020. Anti-government protesters began gathering Wednesday for a planned rally at Bangkok's Democracy Monument being held on the anniversary of a 1973 popular uprising that led to the ousting of a military dictatorship, amid a heavy police presence and fear of clashes with political opponents. (Photo by Gemunu Amarasinghe/AP Photo) 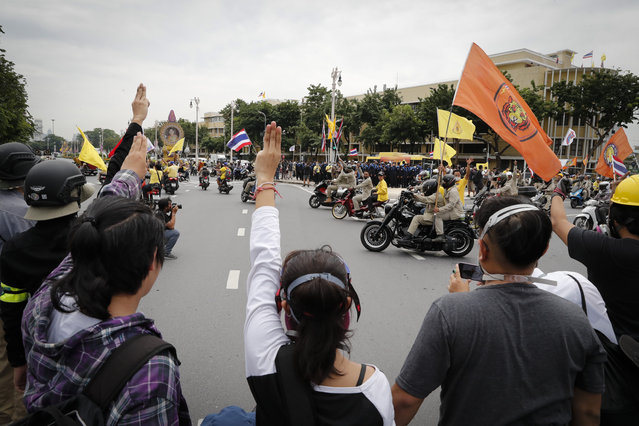 Anti-government protesters raise three-finger salutes, a symbol of resistance, during a protest near the Democracy Monument in Bangkok, Thailand, Wednesday, October 14, 2020. (Photo by Gemunu Amarasinghe/AP Photo) 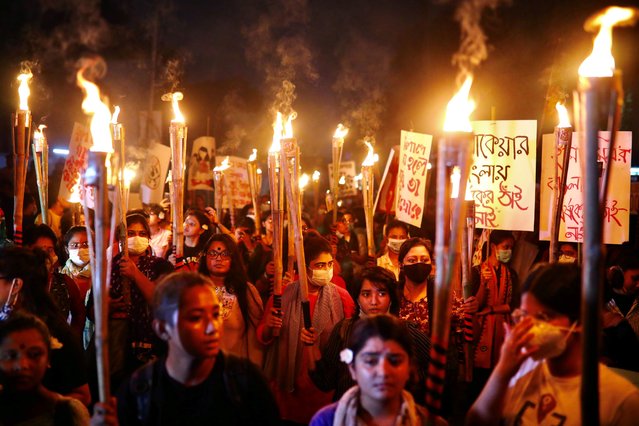 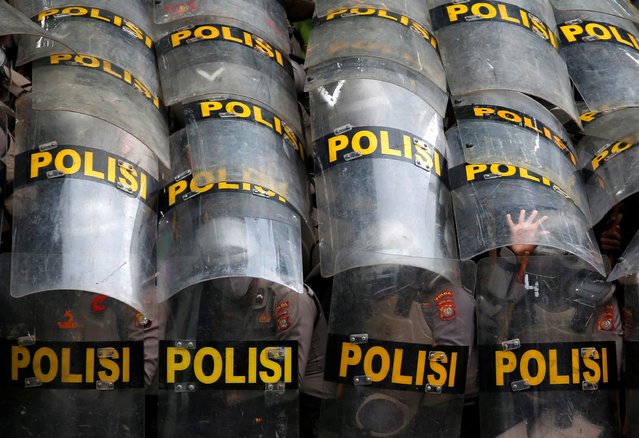 Police officers protect themselves with their shields during a protest against the new so-called omnibus law, in Jakarta, Indonesia, October 13, 2020. (Photo by Willy Kurniawan/Reuters) 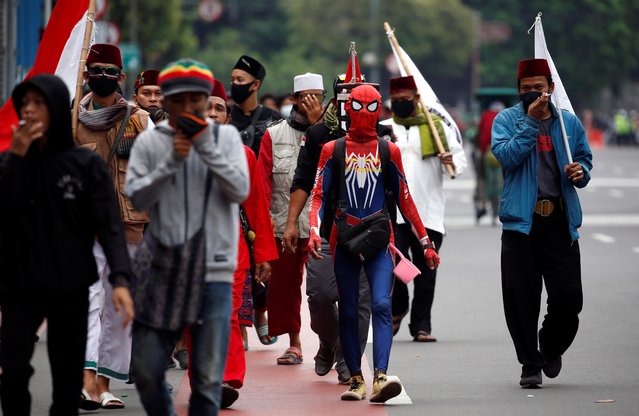 A man wearing a spider-man costume walks on the main road to join a protest against the new so-called omnibus law, in Jakarta, Indonesia, October 13, 2020. (Photo by Willy Kurniawan/Reuters) 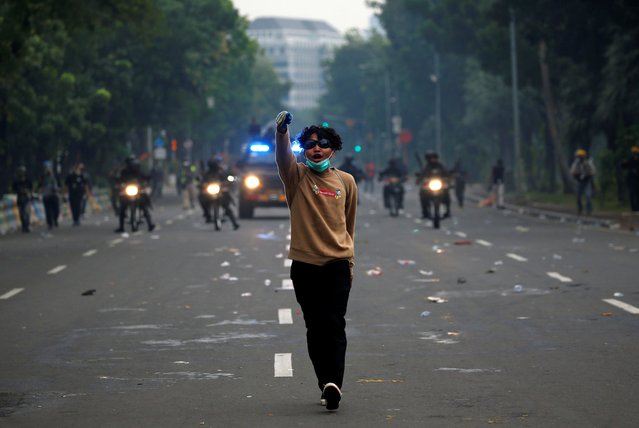 A demonstrator shouts during a protest against the new so-called omnibus law, in Jakarta, Indonesia, October 13, 2020. (Photo by Willy Kurniawan/Reuters) 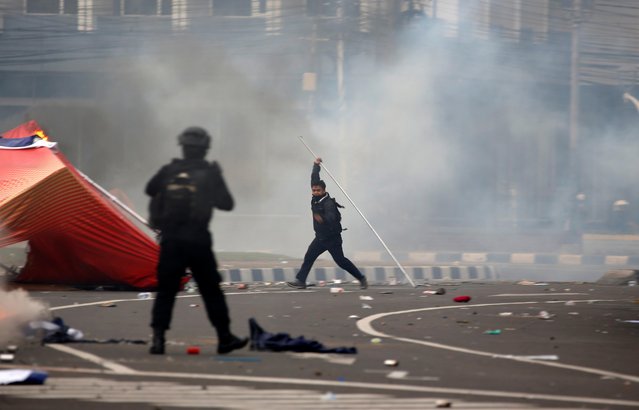 A demonstrator holds a stick during clashes with riot police officers following a protest against the new so-called omnibus law, in Jakarta, Indonesia, October 13, 2020. (Photo by Willy Kurniawan/Reuters) 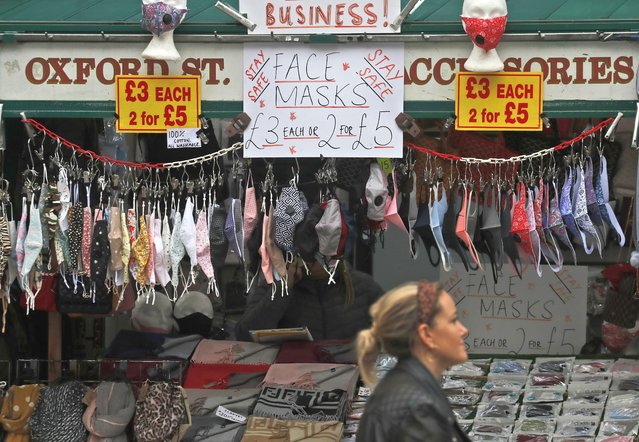 A shop sells face masks on Oxford Street in London, Tuesday, October 13, 2020. Unemployment across the U.K. rose sharply higher in August which is a clear indication that the jobless rate is set to spike higher when a government salary-support scheme ends this month and new restrictions are imposed on local areas to suppress a resurgence of the coronavirus. (Photo by Frank Augstein/AP Photo) 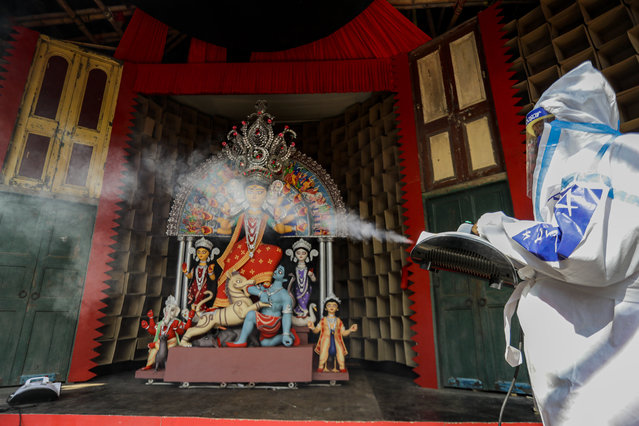 A civic worker wearing a protective suit sanitizes a makeshift worship venue of Hindu goddess Durga in Kolkata, India, Tuesday, October 13, 2020. India has registered 55,342 new confirmed coronaviruses cases in the past 24 hours, the lowest since mid-August. Durga Puja, the biggest festival of the people in this region, will be celebrated from Oct. 22 to 26. (Photo by Bikas Das/AP Photo) 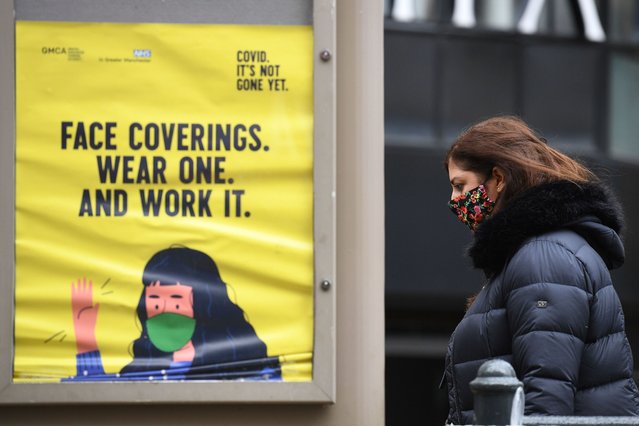 A woman wearing a facemask walks past a poster urging people to wear face coverings, in Manchester, north west England on October 13, 2020, as the number of cases of the novel coronavirus COVID-19 continue to rise. The British government faced renewed pressure on October 13, after indications it had ignored scientific advice three weeks ago for tougher restrictions to cut rising coronavirus infections. (Photo by Oli Scarff/AFP Photo) 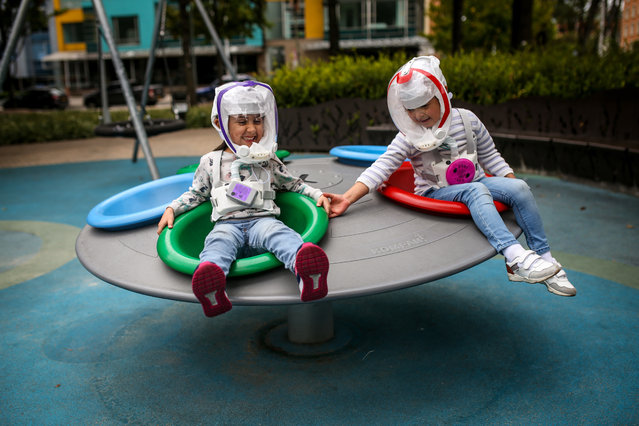 Children are seen with helmets similar to the ones used by astronauts, which have designed by a group of Colombian engineers to be employed as a protective bubble against the novel coronavirus (COVID-19) pandemic in Bogota, Colombia on October 12, 2020. The helmet weighs 650 grams (22.9 oz) and consists of a plastic structure, an electrical part, filters, and a lithium battery with a duration of approximately 6 hours. Currently, they have a version for children, which seek to have greater protection with the return to school and abroad, making the bubble an attractive product to children with comfort and that it is a pleasure to use it since they look like superheroes or astronauts. (Photo by Juancho Torres/Anadolu Agency via Getty Images) 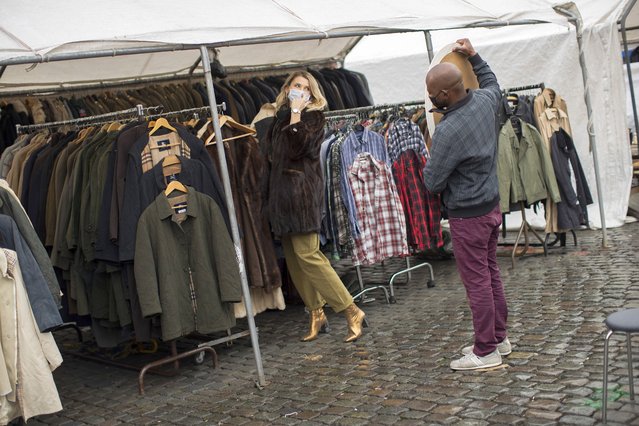 A customer, wearing a face mask to fight against the spread of the coronavirus, tries on a coat at Marolles flea market in Brussels, Tuesday, October 13, 2020. Authorities in Belgium, one of the European countries hit hardest by the coronavirus, are warning that the number of cases is rising at a “quite alarming” rate and that 10.000 people could be catching the virus each day by the end of the week. (Photo by Francisco Seco/AP Photo) 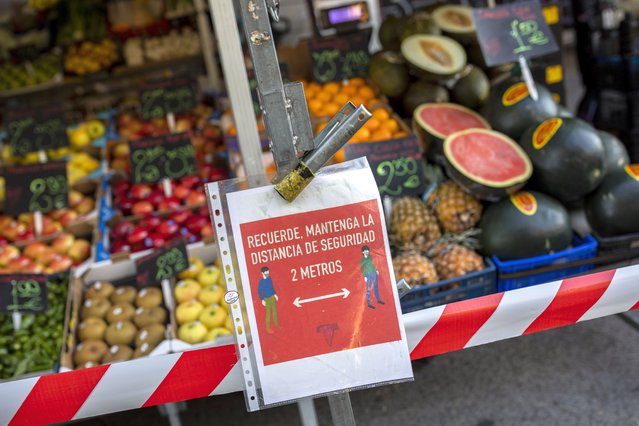 A sign of social distancing guidelines hangs on a street stall in a market in Madrid, Spain, Tuesday, October 13, 2020. The sign reads in Spanish “Remember, keep a safe distance 2 meters”. (Photo by Bernat Armangue/AP Photo) A woman wears a face mask to prevent the spread of COVID-19 as she commutes at the Garibaldi railway station, in Milan, Italy, Tuesday, October 13, 2020. Italian Premiere Giuseppe Conte ordered strict new anti-COVID measures early Tuesday, including limits on private gatherings and a ban on casual pickup sports. Conte negotiated with the regions to win limits on private gatherings, over the objections of some governors. (Photo by Luca Bruno/AP Photo) 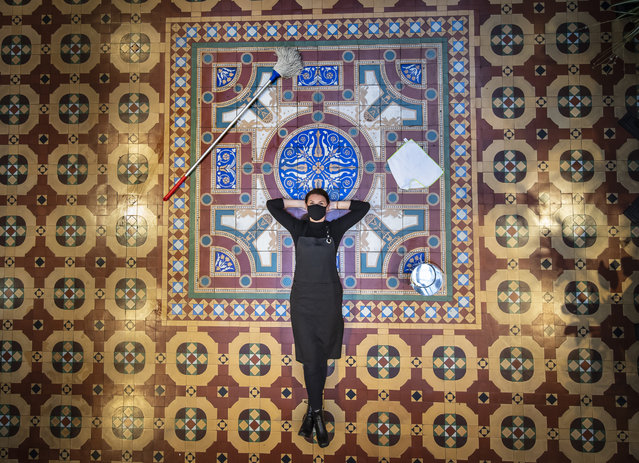 Bar Convent employee Lauren Masterman relaxes after cleaning a historic George and Arthur Maw tiled floor created in 1867, one of only two surviving examples of this assemblage of tiles, at England's oldest living convent Bar Convent on October 13, 2020. Visitors to the convent are being invited to follow in the footsteps of residents from the last 150 years and enjoy the historic space decorated with rare 19th century floor tiles. (Photo by Danny Lawson/PA Images via Getty Images)
Edit Del
15 Oct 2020 00:07:00, post received 0 comments
Publication archive:
←   →
Popular tags:
All tags
Last searches: