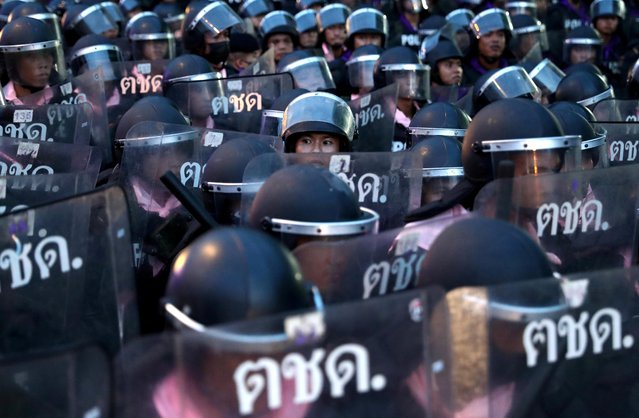 Police officers stand in position during a protest on the 47th anniversary of the 1973 student uprising, in Bangkok, Thailand on October 15, 2020. Thailand's government banned protests and the publication of sensitive news on Thursday in the face of escalating protests that have targeted King Maha Vajiralongkorn as well as Prime Minister Prayuth Chan'ocha, a former junta leader. (Photo by Athit Perawongmetha/Reuters) 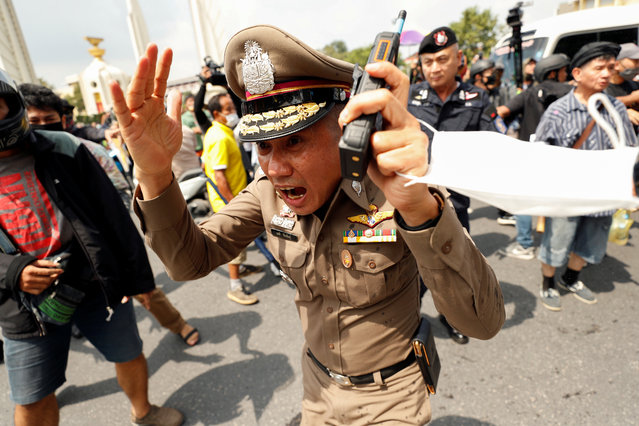 A police officer reacts during clashes between pro-democracy demonstrators and royalists during a Thai anti-government mass protest, on the 47th anniversary of the 1973 student uprising, in Bangkok, Thailand on October 14, 2020. (Photo by Jorge Silva/Reuters) 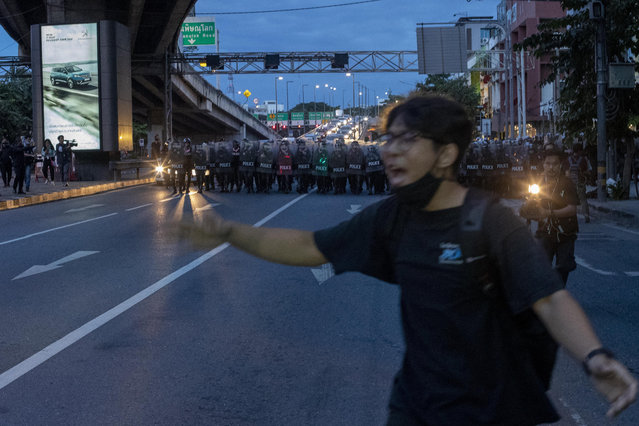 A pro-democracy protester runs as riot police officers charge close to Government House in Bangkok, Thailand, Thursday, October 15, 2020. Riot Police disperse encampment of pro-democracy demonstrators who had camped out overnight after they had marched to Government House – the venue of the prime minister's office on Wednesday, Oct. 14. (Photo by Gemunu Amarasinghe/AP Photo) 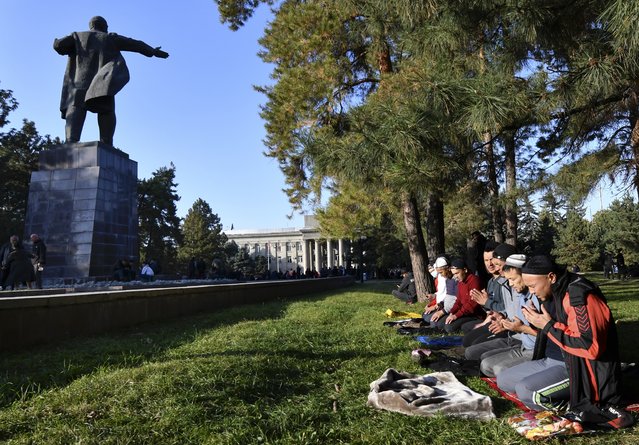 Protesters pray as they wait for Kyrgyz Prime Minister Sadyr Zhaparov speech in front of the government building with a statue of Vladimir Lenin on the left, in Bishkek, Kyrgyzstan, Wednesday, October 14, 2020. Kyrgyzstan's embattled president has discussed his possible resignation with his newly appointed prime minister in a bid to end the political crisis in the Central Asian country after a disputed parliamentary election. President Sooronbai Jeenbekov held talks with Prime Minister Sadyr Zhaparov a day after refusing to appoint him to the post over concerns whether parliament could legitimately nominate him. (Photo by Vladimir Voronin/AP Photo) 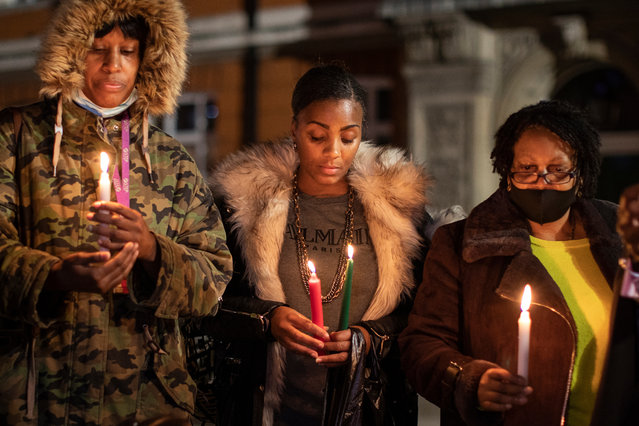 A small group hold a candlelit vigil to mark what would have been the birthday of George Floyd, in Windrush Square in Brixton on October 14, 2020 in the Brixton neighborhood of London, England. Today would have been the 47th birthday of George Floyd, an American man who was killed in police custody on May 25th in the U.S. city of Minneapolis. His death sparked a wave of anti-racism and anti-police brutality protests around the world. (Photo by Dan Kitwood/Getty Images) 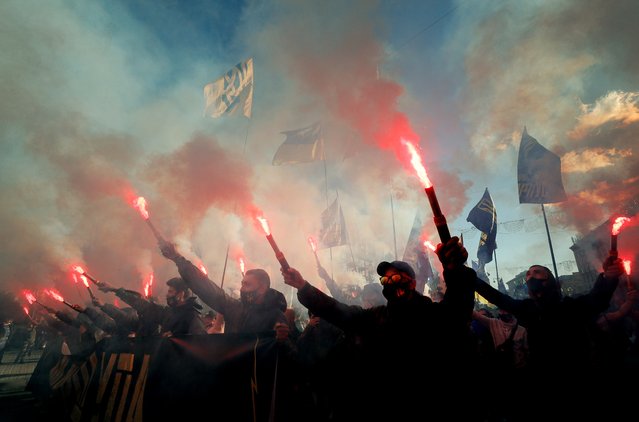 Activists of different nationalists parties burn flares during the march with the slogan “The battle to collaborators!” in downtown Kiev, Ukraine, 14 October 2020. Ukrainians mark the “Day of defender of Motherland” and the 78th anniversary of the Ukrainian Insurgent Army (UPA) creation, which fought for Ukrainian independence against the Soviet Red Army and the Nazis during the Second World War. (Photo by Sergey Dolzhenko/EPA/EFE) 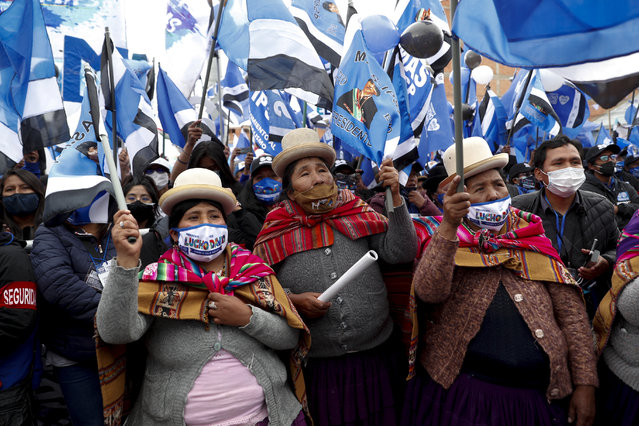 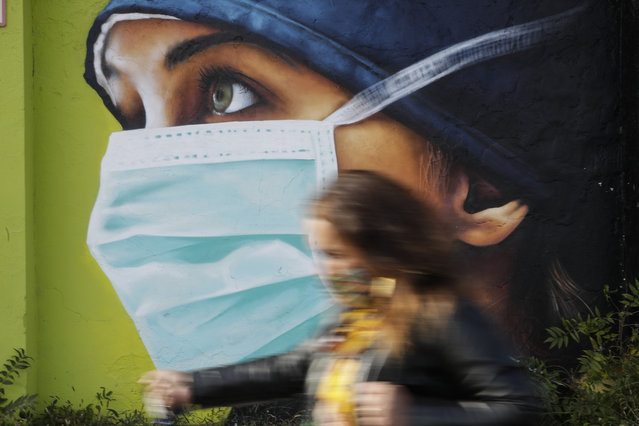 A woman walks in from of a mural painting of a nurse, in Milan, Italy, Wednesday, October 14, 2020. Coronavirus infections are surging again in the Italian northern region where the pandemic first took hold in Europe, putting pressure again on hospitals and health care workers. (Photo by Luca Bruno/AP Photo) 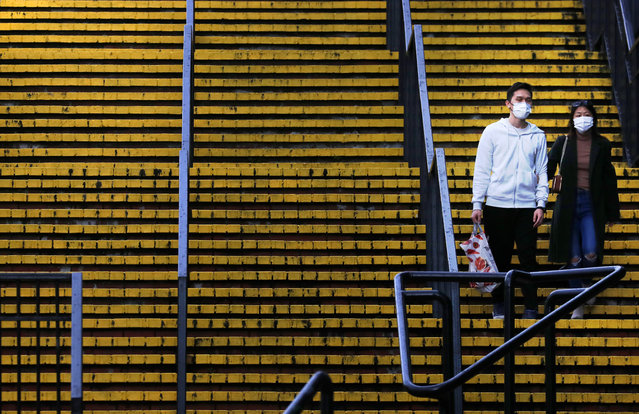 A couple wearing face masks walks down the stairs of a shopping centre as new measures across the region are set to come into force in Liverpool, England, Wednesday, October 14, 2020. New plans unveiled this week show Liverpool is in the highest-risk category, and its pubs, gyms and betting shops have been shut. (Photo by Frank Augstein/AP Photo) 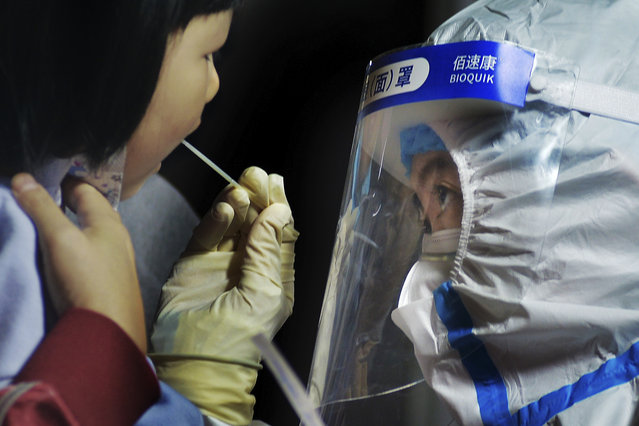 A medical staff takes a swab from a child near a residential area in Qingdao in east China's Shandong province on Tuesday, October 13, 2020. A hospital president and the director of the health commission in the northern Chinese city of Qingdao have been fired after China's latest coronavirus outbreak, authorities said Thursday, Oct. 15, 2020. (Photo by Chinatopix via AP Photo) 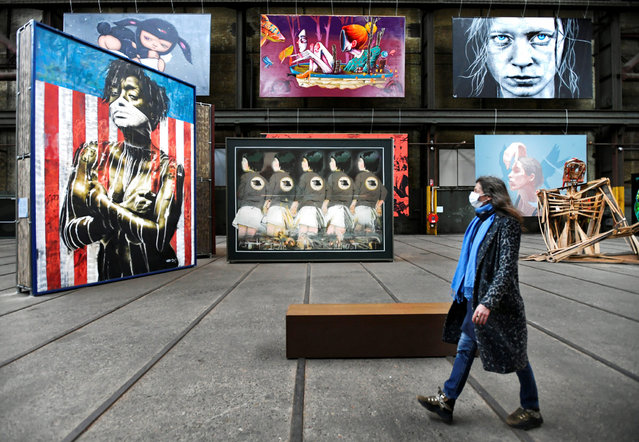 A woman wearing a mask looks at street art as she walks at the International Street Art Museum following the new social restrictions announced by the Dutch government, as the Netherlands battle to control the spread of the coronavirus disease (COVID-19), in Amsterdam, Netherlands on October 14, 2020. (Photo by Piroschka van de Wouw/Reuters) 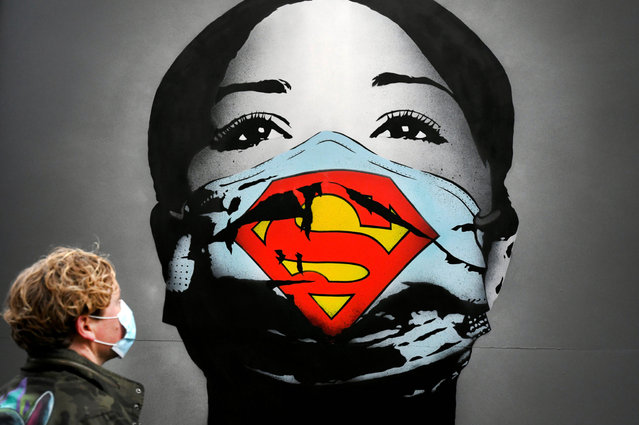 A man wearing a mask looks at street art at the International Street Art Museum following the new social restrictions announced by the Dutch government, as the Netherlands battle to control the spread of the coronavirus disease (COVID-19), in Amsterdam, Netherlands on October 14, 2020. (Photo by Piroschka van de Wouw/Reuters) 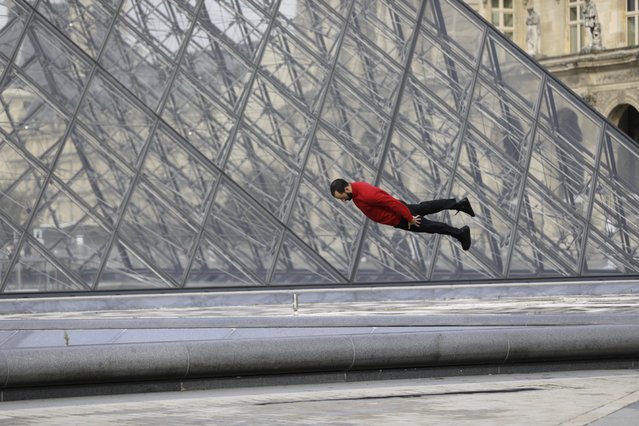 A man performs a jumps in the almost empty courtyard of the Louvre museum, Wednesday, October 14, 2020 in Paris. French President Emmanuel Macron is giving a nationally televised interview Wednesday night to speak about the virus, his first in months. French media reports say Macron will also step up efforts on social media to press the need for virus protections among young people. (Photo by Lewis Joly/AP Photo) 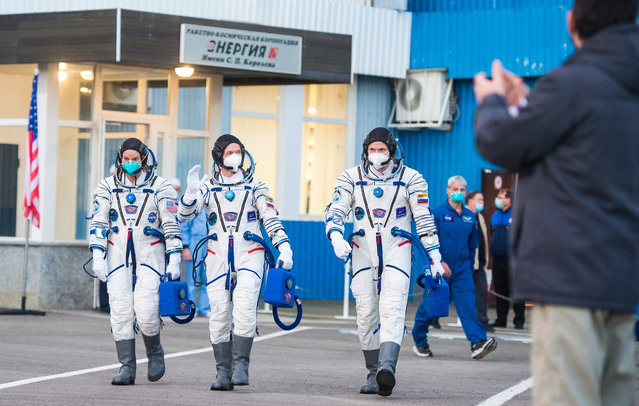 NASA astronaut Kate Rubins and Russian cosmonauts Sergey Ryzhikov and Sergey Kud-Sverchkov, members of the International Space Station (ISS) expedition 64, walk to board the Soyuz MS-17 spacecraft prior to the launch from the Russian-leased Baikonur cosmodrome in Kazakhstan on October 14, 2020. (Photo by Andrey Shelepin/Russian Space Agency Roscosmos/AFP Photo) 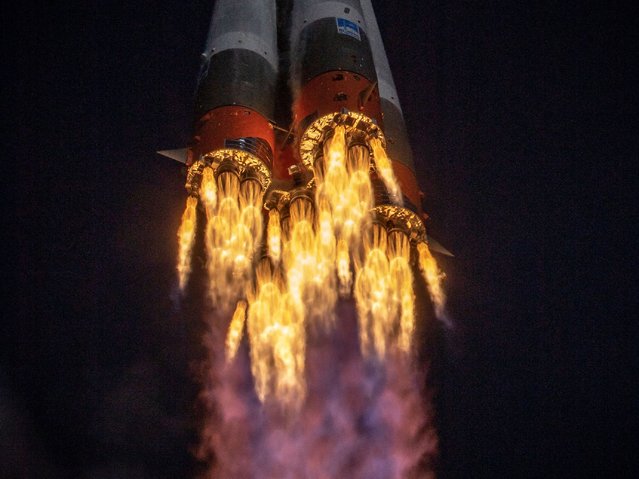