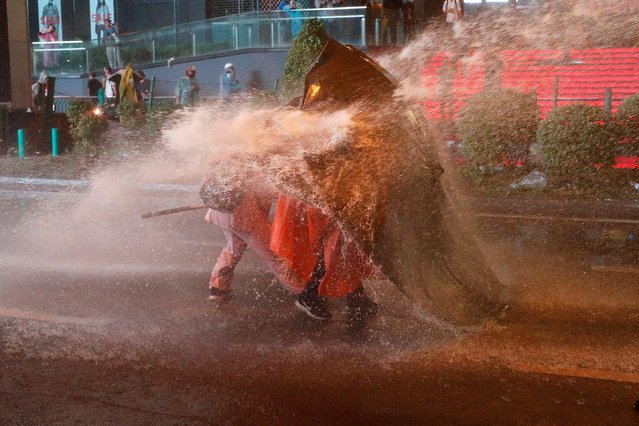 People are hit with water from water cannons during an anti-government protest, in Bangkok, Thailand on October 16, 2020. (Photo by Jorge Silva/Reuters) 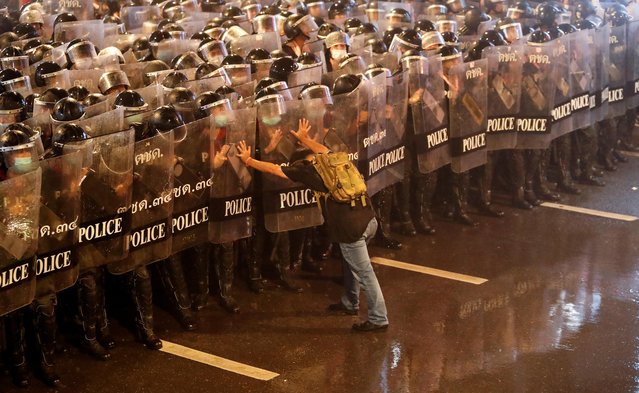 A man pushes against police officers during an anti-government protest, in Bangkok, Thailand on October 16, 2020. (Photo by Jorge Silva/Reuters) 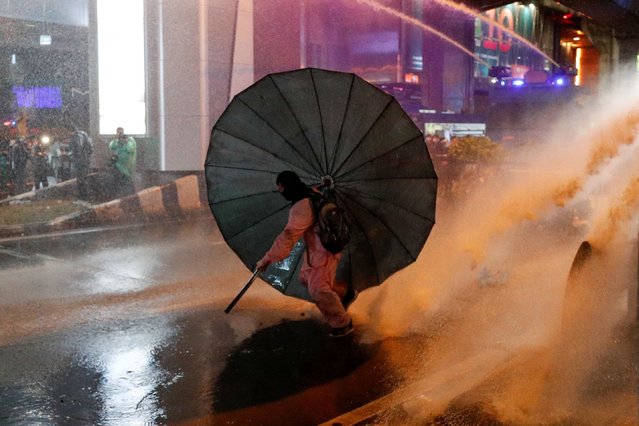 A man takes cover behind an umbrella during an anti-government protest, in Bangkok, Thailand on October 16, 2020. (Photo by Jorge Silva/Reuters) 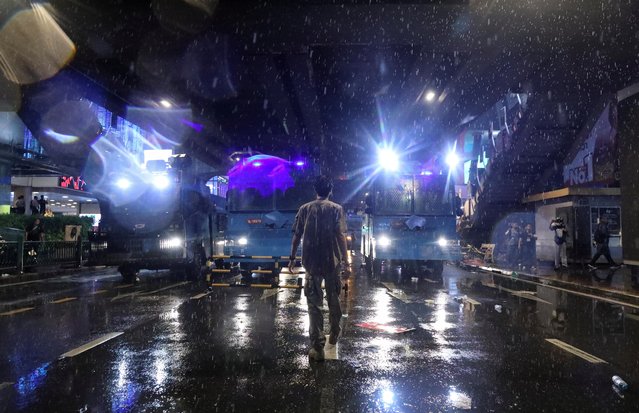 A man walks in the middle of the road during anti-government protests, in Bangkok, Thailand on October 16, 2020. (Photo by Soe Zeya Tun/Reuters) 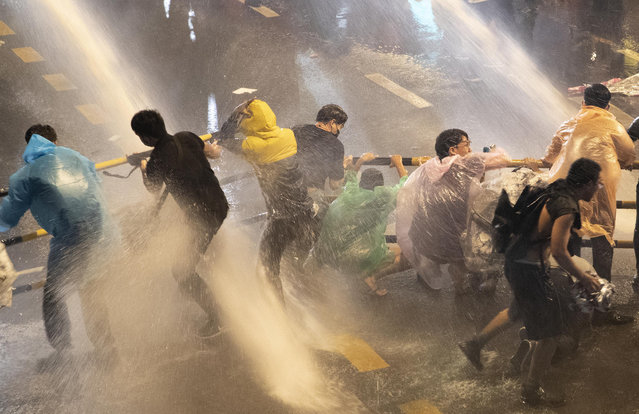 Pro democracy demonstrators face water canons as police try to clear the protest venue in Bangkok, Thailand, Friday, October 16, 2020. Thailand prime minister has rejected calls for his resignation as his government steps up efforts to stop student-led protesters from rallying in the capital for a second day in defiance of a strict state of emergency. (Photo by Gemunu Amarasinghe/AP Photo) 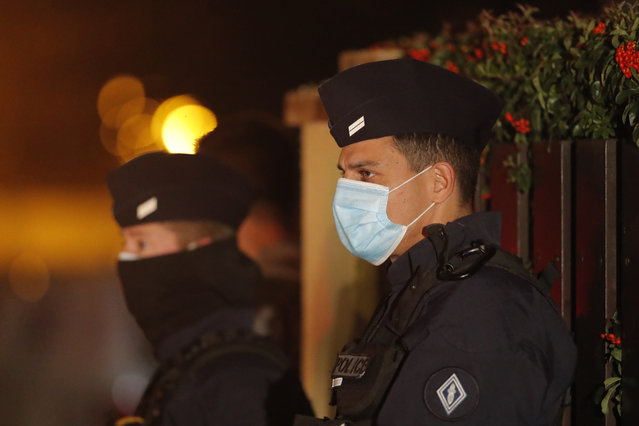 French police officers stand outside a high school after a history teacher who opened a discussion with students on caricatures of Islam's Prophet Muhammad was beheaded, Friday, October 16, 2020 in Conflans-Sainte-Honorine, north of Paris. Police have shot the suspected killer dead. The teacher had received threats after opening a discussion “for a debate” about the caricatures about 10 days ago, the police official told The Associated Press. (Photo by Michel Euler/AP Photo) 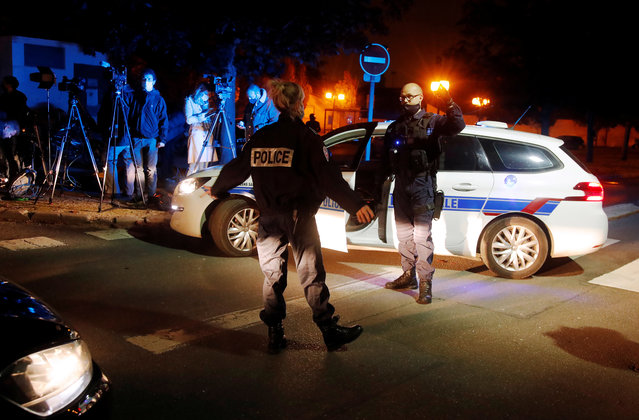 Police officers secure the area near the scene of a stabbing attack in the Paris suburb of Conflans St Honorine, France, October 16, 2020. (Photo by Charles Platiau/Reuters) 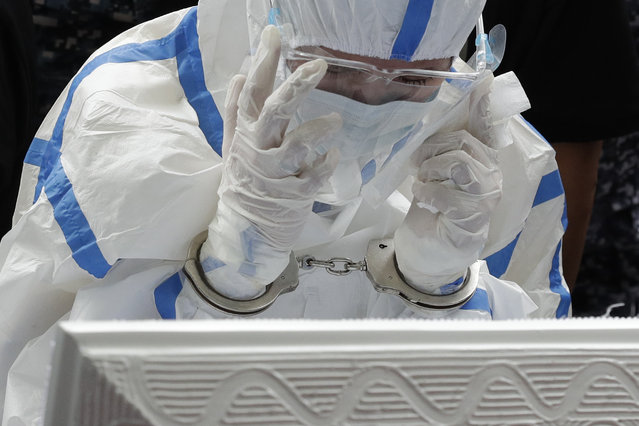 Detained left-wing activist Reina Mae Nasino in handcuffs and wearing a protective suit to prevent the spread of the coronavirus looks at the coffin of her three-month-old firstborn named River during funeral rites at Manila's North Cemetery, Philippines on Friday October 16, 2020. Left-wing groups on Friday decried the treatment as brutal of a detained activist, who was allowed by a Manila court to attend her baby's burial but was restrained with handcuffs, a sweltering protective suit and swarms of armed escorts as she quietly wept. (Photo by Aaron Favila/AP Photo) 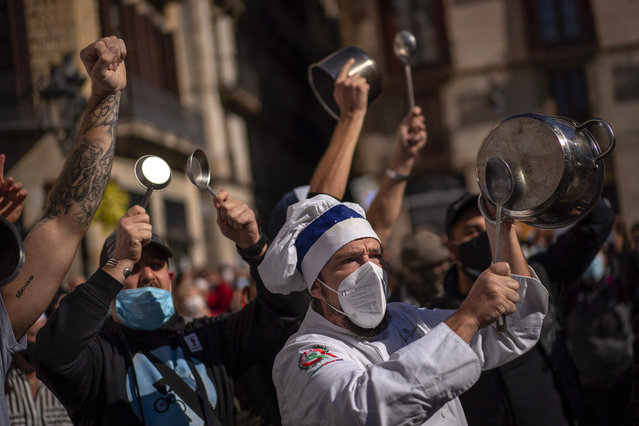 Workers of catering sectors take part in a protest organised by restaurants and bar owners in Barcelona, Spain, Friday October 16, 2020. Bars and restaurants close from Friday and for two weeks in Spain's northeastern Catalonia region, while other cities impose or prepare for soft lockdowns amid one of Europe's sharpest resurgences of the new coronavirus. (Photo by Emilio Morenatti/AP Photo) 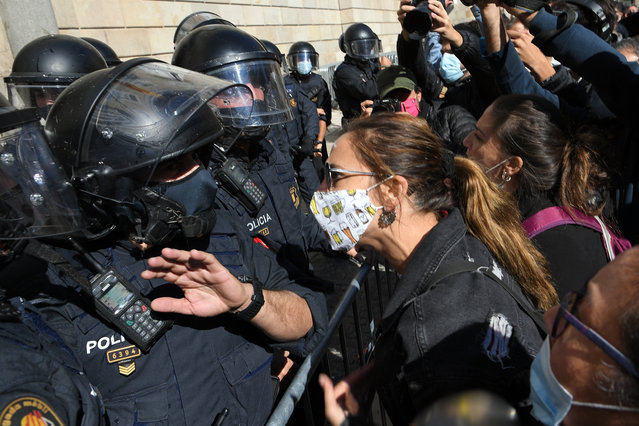 Demonstrators protest in front of Catalan regional police during a demonstration on October 16, 2020 in Barcelona to protest against the new restrictions imposed by the regional government on bars and restaurants to fight against COVID-19 disease. Bars and restaurants are to be closed across Spain's northeastern Catalonia region for the next 15 days to slow rising coronavirus infections, the regional government said on October 14, 2020. The move comes as Spain battles one of the highest rates of infection in the European Union, with nearly 900,000 infections and more than 33,000 deaths. (Photo by Lluis Gene/AFP Photo) 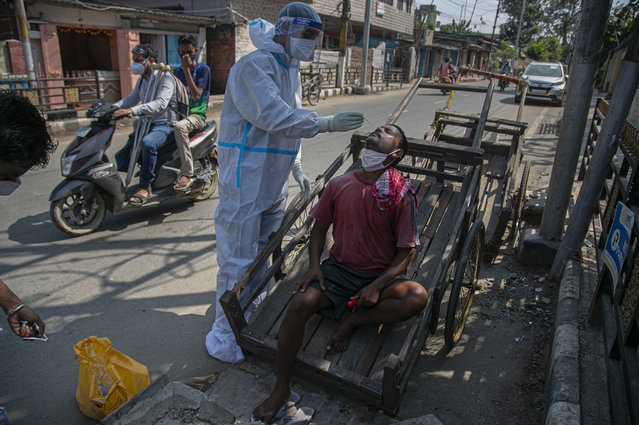 A health worker takes a nasal swab sample of a cartpuller during random testing for COVID-19 in a market in Gauhati, India, Friday, October 16, 2020. India’s coronavirus fatalities jumped by 895 in the past 24 hours, a day after recording the lowest daily deaths of 680 in nearly three months. The Health Ministry on Friday also reported 63,371 new cases in the past 24 hours, raising India’s total to more than 7.3 million, second in the world behind the U.S. (Photo by Anupam Nath/AP Photo) 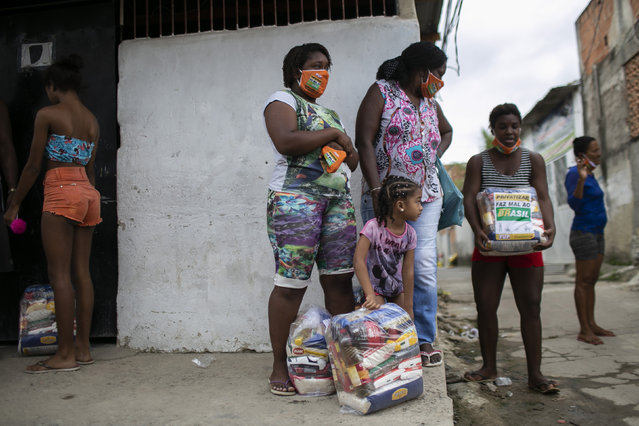 Residents receive donated food from Petrobras workers and the oil workers union via the Tankers’ Campaign that provide a supplement for the poor caught by declining wages and jobs due to the new coronavirus pandemic, in the Vila Vintem neighborhood of Rio de Janeiro, Brazil, Friday, October 16, 2020. (Photo by Bruna Prado/AP Photo) 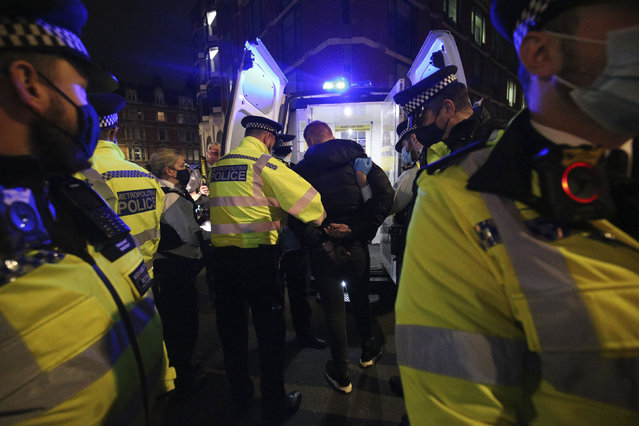 Police detain a man while dispersing a gathering in Soho on the last night before the city is put into Tier 2 restrictions to curb the spread of coronavirus, in London, Friday, October 16, 2020. (Photo by Jonathan Brady/PA Wire via AP Photo) 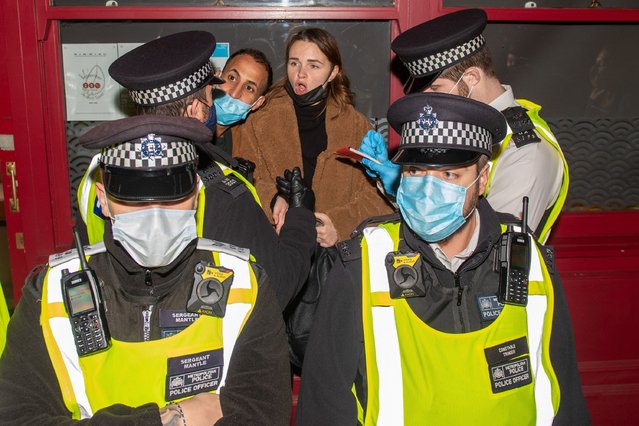 Police disperse a gathering on the corner of Old Compton Street and Frith Street, London, on the last night before the city is put into Tier 2 restrictions to curb the spread of coronavirus. (Photo by London News Pictures) 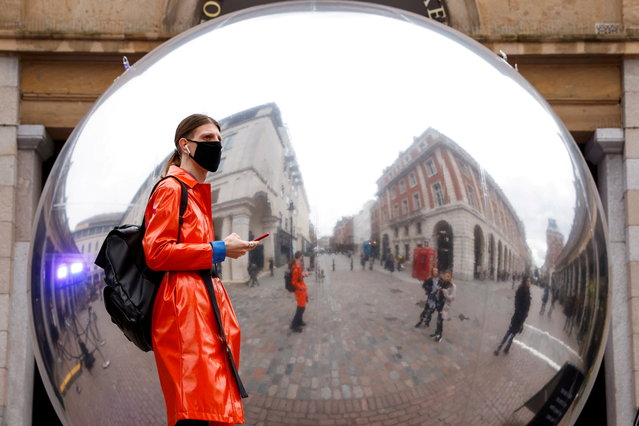 A person wearing a face mask is reflected in an art work entitled “A=V” by Ben Cullen Williams, amid the coronavirus disease (COVID-19) outbreak, in Covent Garden, London, Britain on October 16, 2020. (Photo by John Sibley/Reuters) 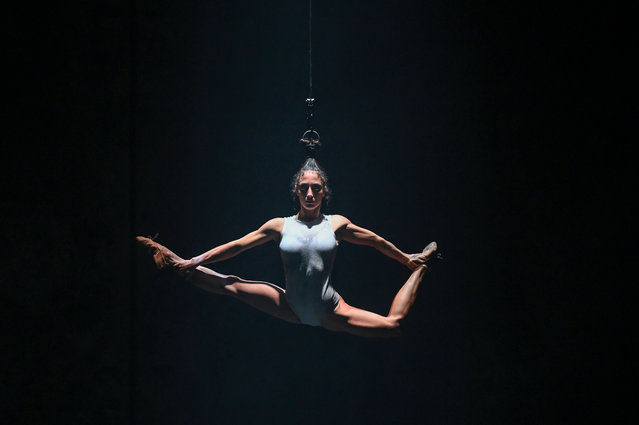 A members of the Hungarian circus dance company “Recirquel” hangs performing on the stage of the Budapest Arts' Palace (Muepa) in the frame of the CAFe (Budapest Contemporary Arts Festival) during the premiere of the show “Solus Amor”, directed by the Hungarian art director Bence Vagi, in Budapest, Hungary, on October 15, 2020. The Recirquel fuses contemporary circus with classical and modern dance creating “cirque dance”, a new language in the performing arts. (Photo by Attila Kisbenedek/AFP Photo) 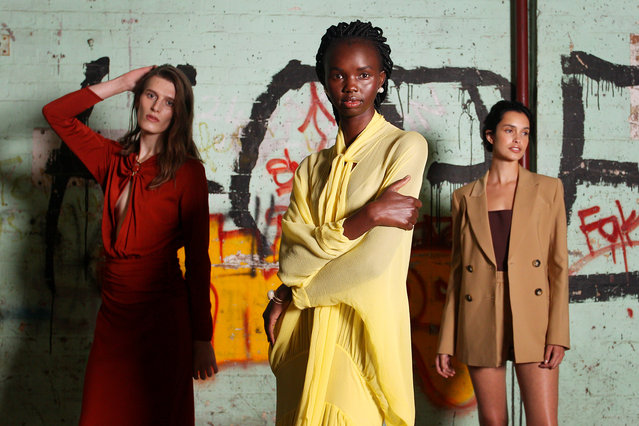