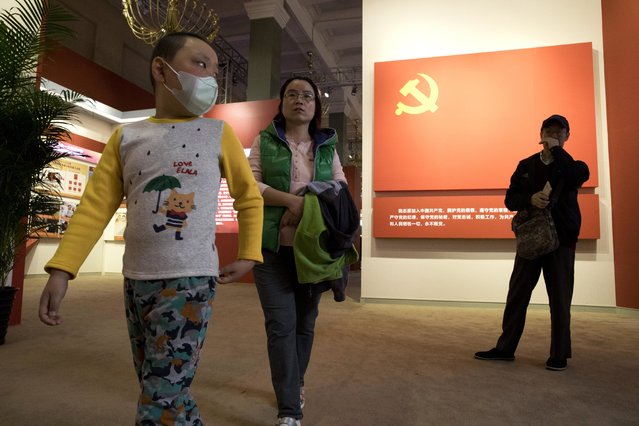 Visitors walk past a Chinese Communist Party flag at an exhibition highlighting China's achievements under five years of Xi's leadership at the Beijing Exhibition Hall in Beijing, China, Thursday, October 19, 2017. China's ruling Communist Party is expanding its role in business even as it promises freer markets and support for entrepreneurs on the eve of President Xi Jinping's second five-year term as leader. (Photo by Ng Han Guan/AP Photo) 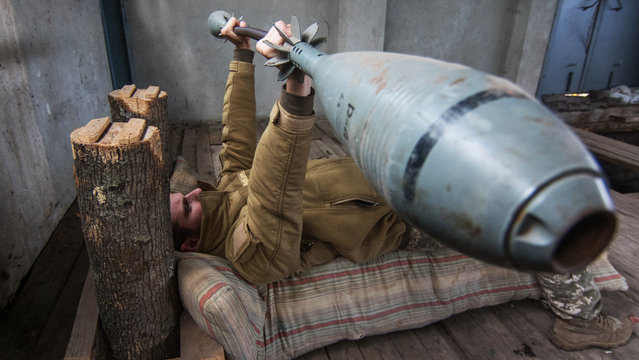 Ukrainian serviceman takes his exercises with 35 kg weight made from 120mm mortar, not far of front line in Vodyane village of Donetsk area, Ukraine, 16 October 2017. Two Ukrainian soldiers were wounded on a past day when pro-Russian rebels attacked Ukrainian army positions in Donbas, according to the local media report. (Photo by Sergey Vaganov/EPA/EFE) 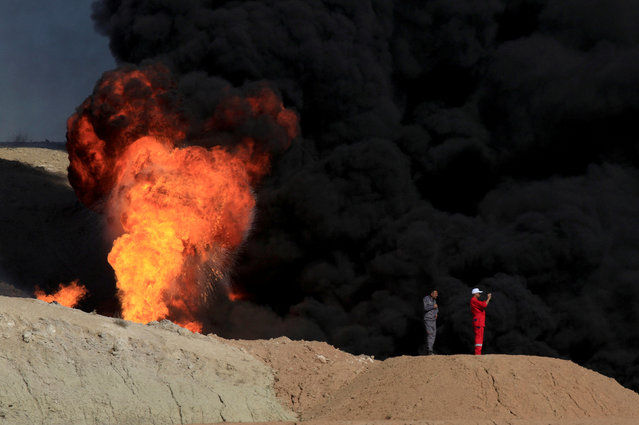 Smoke rises from oil wells, in Dibis area on the outskirts of Kirkuk, Iraq October 17, 2017. (Photo by Alaa Al-Marjani/Reuters) 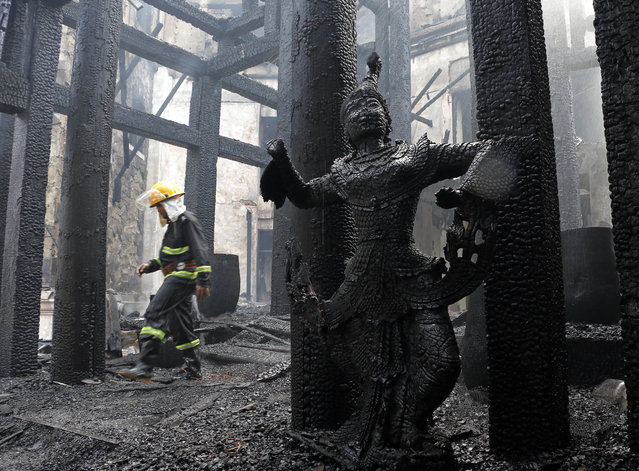 A firefighter walks at a burnt building following a fire at the Kandawgyi Palace Hotel Thursday, October 19, 2017, in Yangon, Myanmar. A fire has nearly destroyed the luxury teakwood hotel popular with foreigners in Myanmar's biggest city of Yangon. (Photo by Thein Zaw/AP Photo) 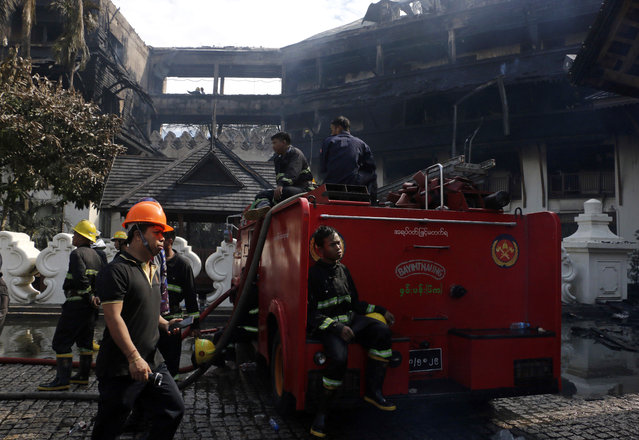 Firefighters rest after putting out a fire at the Kandawgyi Palace Hotel Thursday, October 19, 2017, in Yangon, Myanmar. (Photo by Thein Zaw/AP Photo) 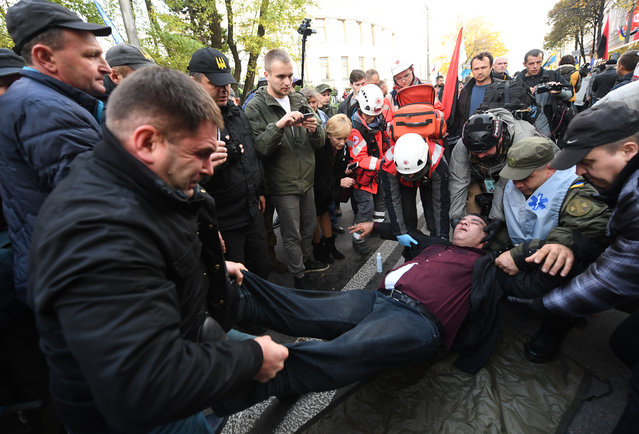 Protesters carry an injured man following clashes with police during a rally of Ukrainian opposition in front of the parliament in Kiev on October 17, 2017. Mikheil Saakashvili, the former leader of Georgia, told a rally in Kiev on October 17, 2017 that President Petro Poroshenko needed to make anti-corruption reforms or leave power if Ukrainians were to see change in their country. The rally outside the Ukrainian parliament in Kiev was called by several political parties including Saakashvili's, who used the opportunity to rally supporters after dramatically returning to Ukraine in September. (Photo by Sergei Supinsky/AFP Photo) 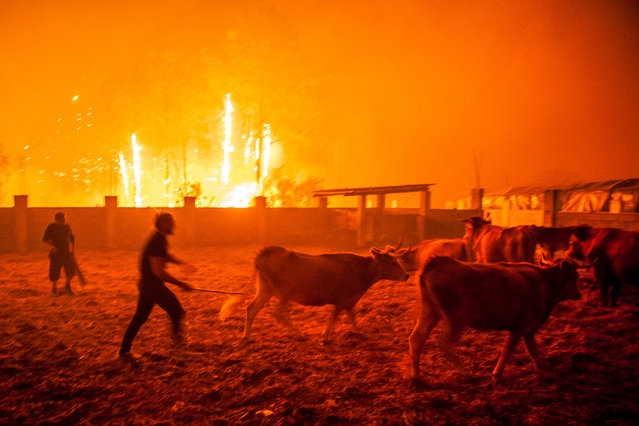 Men gather cattle during a forest fire in Vieira de Leiria, Marinha Grande, Portugal, 16 October 2017. Around 6,000 firemen supported by 1,800 land vehicles are fighting several wildfires all over the country this morning. (Photo by Ricardo Graca/EPA/EFE) 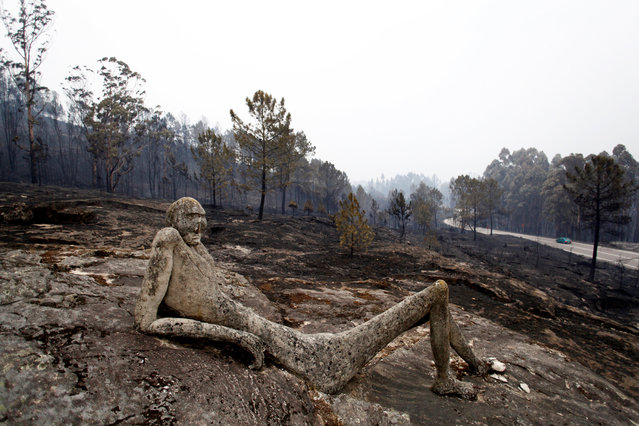 A burnt sculpture is seen after a forest fire in As Neves, Galicia, Spain, near the border with Portugal, 16 October 2017. Three people have died as several forest fires are still active in Galicia burning more than 4,000 hectares, and they are aggravated with high temperatures and drought. (Photo by EPA/Cabalar) 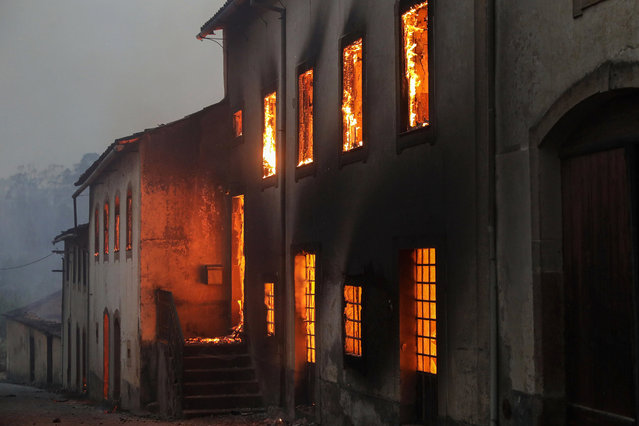 A house burns in Moinhos village, Lousa, Portugal, 15 October 2017. The National Civil Protection Authority (ANPC) said it “was the worst day of the year in terms of fires”, having exceeded 300 forest fires. (Photo by Paulo Cunha/EPA) 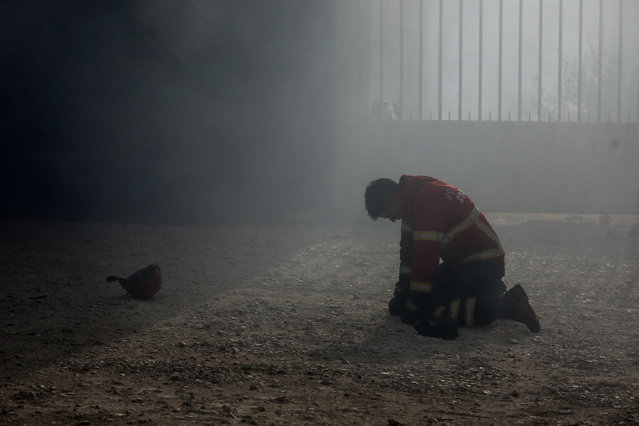 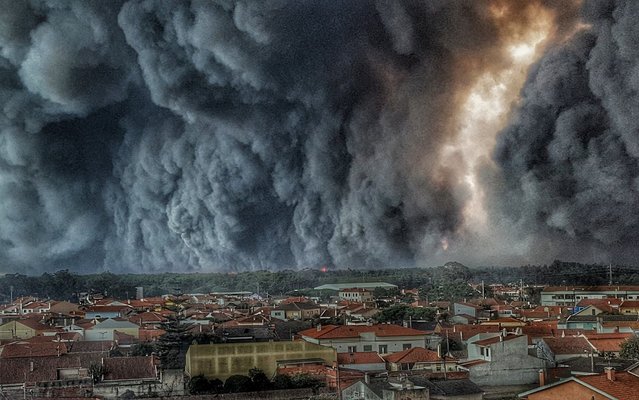 Fire over Vieira de Leiria, Portugal, on October 16, 2017 as a series of deadly wildfires broke out across Spain and Portugal as the approach of Hurricane Ophelia whipped up strong winds that fanned the flames. (Photo by Helio Madeiras/News Pictures) 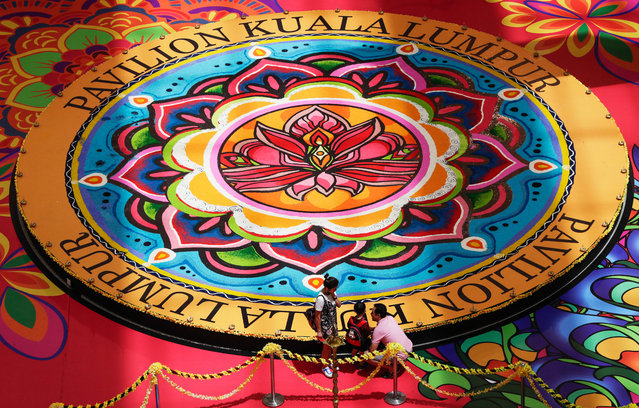 A family looks at an area decorated as a “Unity Kolam”, made of turmeric powder, rice grains and rice flour, on the floor of a shopping mall and created and displayed in conjunction with the Deepavali Hindu Festival, in Kuala Lumpur, Malaysia, 18 October 2017. The “Unity Kolam” was designed by some 100 international students from Limkokwing University, from 18 countries including Venezuela, Brazil and Maldives. The kolam design features the elephant, peacock and lotus, symbolizing power, beauty and health. (Photo by Fazry Ismail/EPA/EFE) 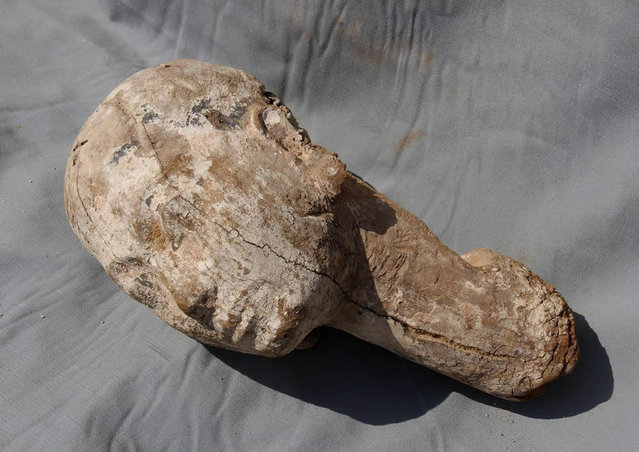 This undated photo released by the Egyptian Ministry of Antiquities shows a wooden head believed to depict Ankhesenpepi II, the mother of King Pepi II of the 6th dynasty who ascended to the throne at the age of six, that was was found in the district of Saqqara, near the ancient Pyramids of Giza during excavation work. In a statement Wednesday, October 18, 2017, by the Antiquities Ministry said the artifact is in poor condition and will have to undergo restoration. (Photo by Egyptian Ministry of Antiquities via AP Photo) 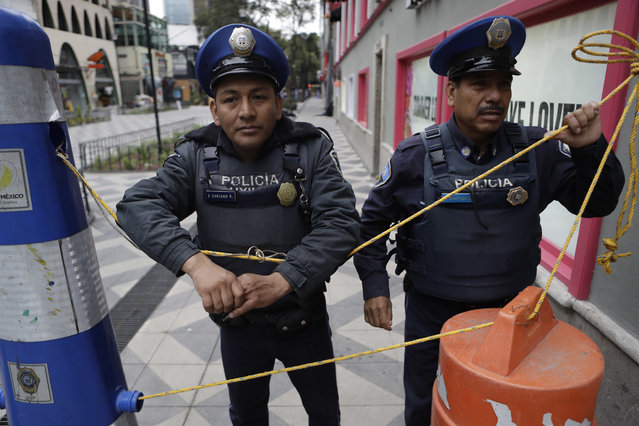 In this October 17, 2017 photo, police block access to a closed section of pedestrian Genova Street, where an 11-story building was heavily damaged in the Sept. 19 earthquake, in the Zona Rosa neighborhood of Mexico City. Local businesses are calling for quick demolition of the damaged building at Genova 33 and the reopening of the block to allow business to return to the busy commercial and tourist district. (Photo by Rebecca Blackwell/AP Photo) 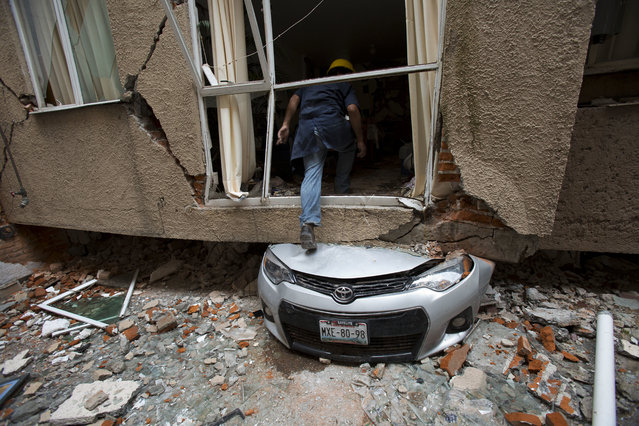 Rodrigo Diaz Mejia climbs over a crushed car into what was a second-story apartment at 517 Tokio street, felled by the earthquake almost one month ago in the Portales Norte neighborhood of Mexico City, Wednesday, October 18, 2017. The 38-year-old mechanic who lives nearby said he ran to help rescue people trapped atop the buildings roofs on the day of the quake, Sept. 19, and has since been making risky trips into the ruptured structures to retrieve valuable possessions for displaced residents. (Photo by Rebecca Blackwell/AP Photo) 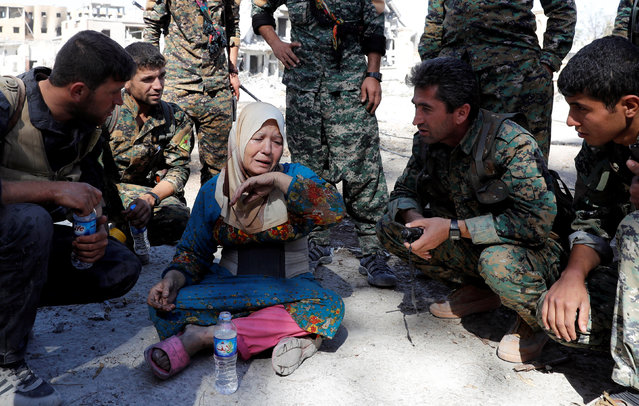 A woman cries after she was rescued by fighters of Syrian Democratic Forces at the stadium after Raqqa was liberated from the Islamic State militants, in Raqqa, Syria October 17, 2017. (Photo by Erik De Castro/Reuters) 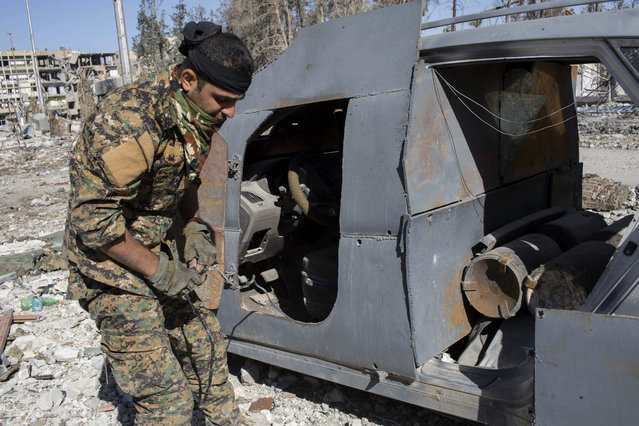 A members of the U.S.-backed Syrian Democratic Forces (SDF) checks a would-be car bomb at the stadium that was the site of Islamic State fighters' last stand in the city of Raqqa, Syria, Wednesday, October 18, 2017. SDF were removing land mines and clearing roads in the northern city a day after commanders said they had driven the Islamic State group from its de facto capital. (Photo by Asmaa Waguih/AP Photo) 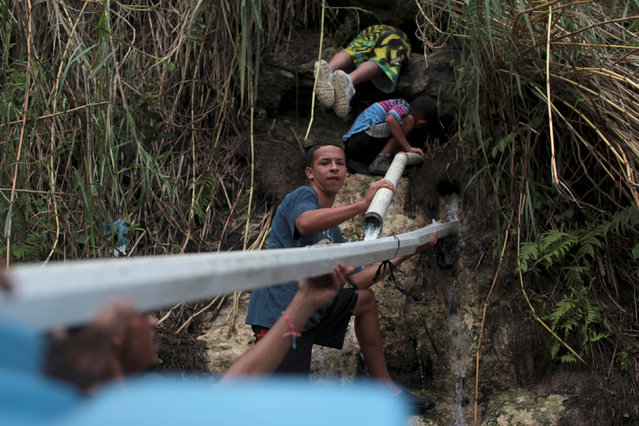 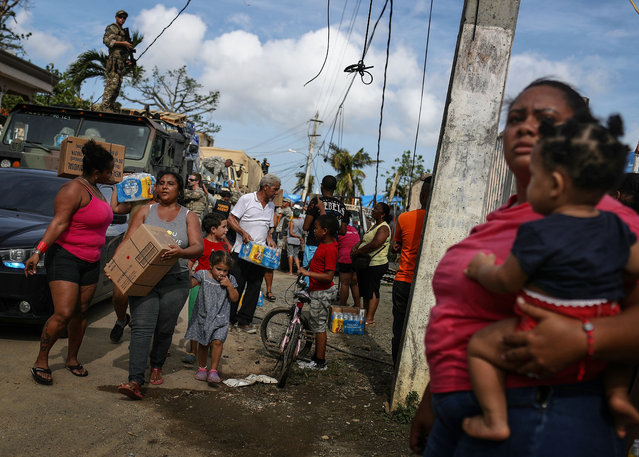 Residents gather and receive food and water, provided by FEMA, in a neighborhood without grid electricity or running water on October 17, 2017 in San Isidro, Puerto Rico. The food and water delivery mission included U.S. Army, U.S. Coast Guard and Puerto Rico Hacienda forces. Residents said this was the first official governmental delivery of food and water to the community, nearly four weeks after the hurricane hit. Puerto Rico is suffering shortages of food and water in areas and only 17.7 percent of grid electricity has been restored. Puerto Rico experienced widespread damage including most of the electrical, gas and water grid as well as agriculture after Hurricane Maria, a category 4 hurricane, swept through. (Photo by Mario Tama/Getty Images) 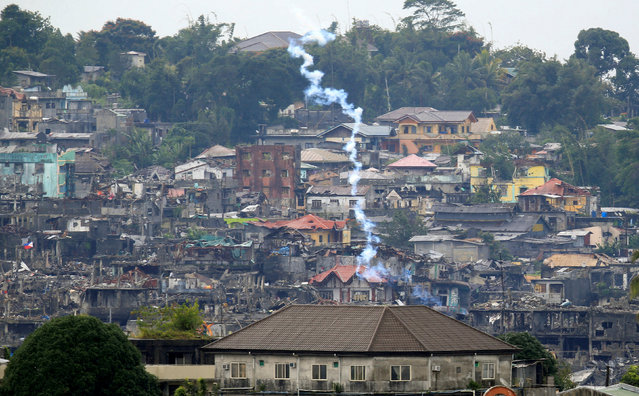 Teargas is fired by government troops as they continue their assault against the pro-Islamic State militant group during a clearing operation in Marawi city, southern Philippines, October 18, 2017. (Photo by Romeo Ranoco/Reuters) 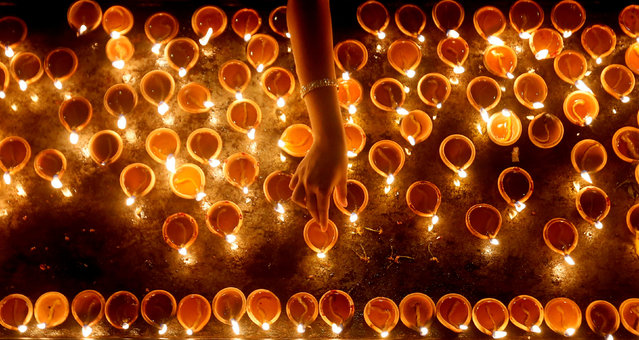 A devotee lights oil lamps at a religious ceremony during the Diwali or Deepavali festival at a Hindu temple in Colombo, Sri Lanka October 18, 2017. (Photo by Dinuka Liyanawatte/Reuters) 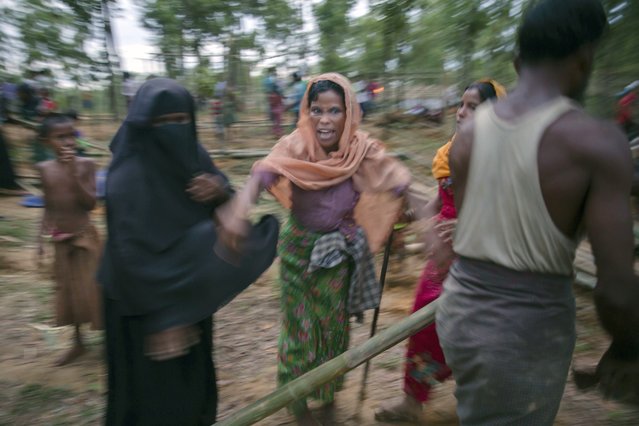 Rohingya Muslim women, who crossed over from Myanmar into Bangladesh, fight over a bamboo meant for constructing shelter for themselves at Kutupalong refugee camp, in Bangladesh, Wednesday, October 18, 2017. More than 580,000 refugees have arrived in Bangladesh since Aug. 25, when Myanmar security forces began a scorched-earth campaign against Rohingya villages. Myanmar's government has said it was responding to attacks by Muslim insurgents, but the United Nations and others have said the response was disproportionate. (Photo by Dar Yasin/AP Photo) 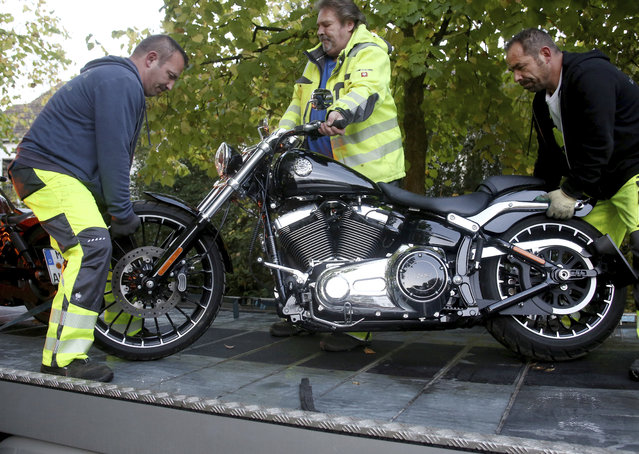 A motorcycle of a member of the Hells Angels is being seized in Erkrath, western Germany, Wednesday, October 18, 2017. More than 700 German police raided buildings used by a local chapter of the Hells Angels biker gang near the western city of Duesseldorf after state authorities banned the group on suspicion it was engaged in a wide range of criminal activity. (Photo by Roland Weihrauch/DPA via AP Photo) 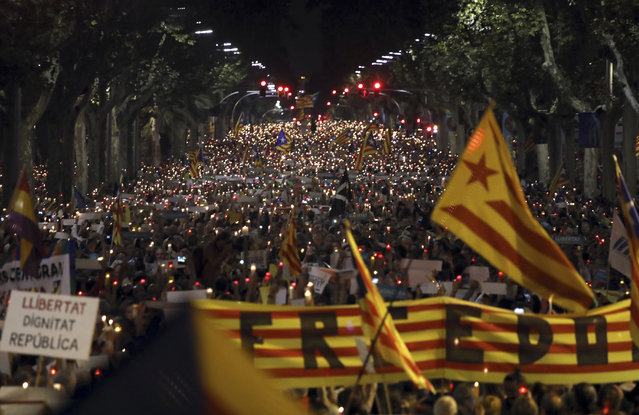 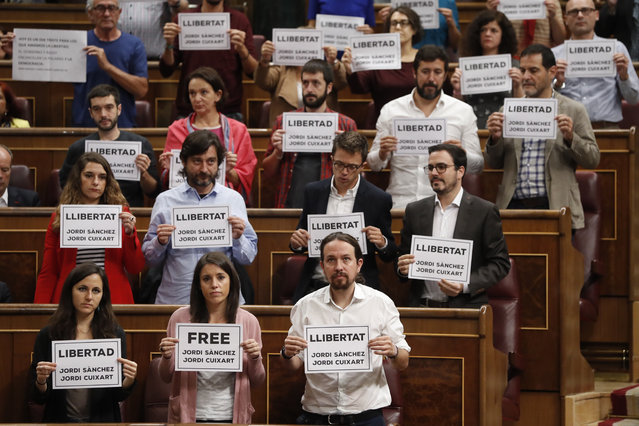 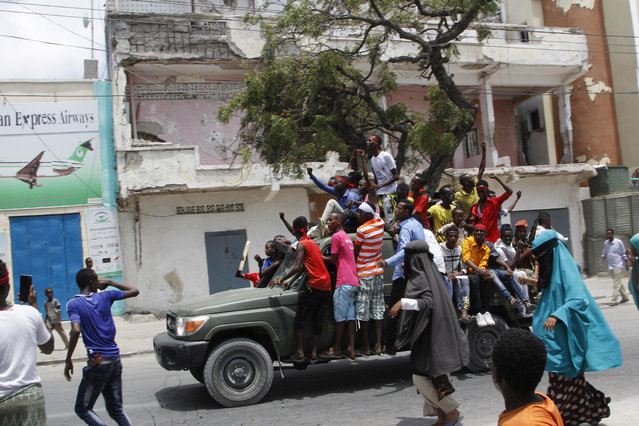 Protesters march near the scene of Saturday's massive truck bomb attack in Mogadishu, Somalia, Wednesday, October 18, 2017. Thousands of people took to the streets of Somalia's capital Wednesday in a show of defiance after the country's deadliest attack, as two people were arrested in connection with Saturday's massive truck bombing that killed more than 300. (Photo by Farah Abdi Warsameh/AP Photo) 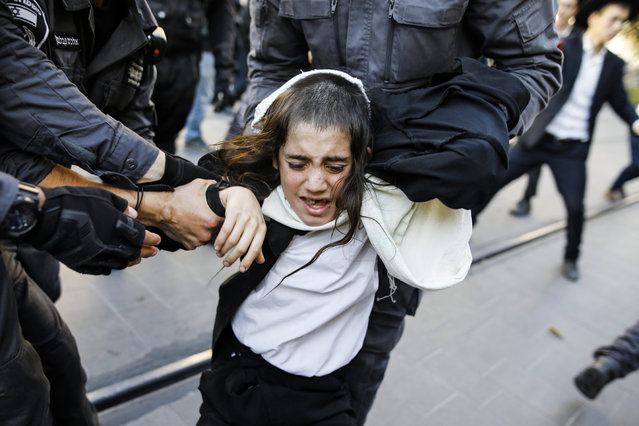 Israeli security forces grab an Ultra-Orthodox Jewish boy demonstrator blocking a main road as they disperse a protest against Israeli army conscription in the centre of Jerusalem on October 17, 2017. Many ultra-Orthodox oppose military service for their young men because they believe it exposes them to influences and temptations not found in the insular world of prayer and religious study. (Photo by Menahem Kahana/AFP Photo) 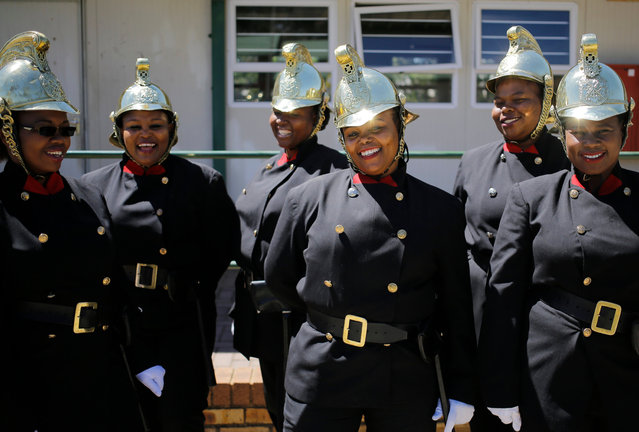 Ceremonial officers prior to the parade marking the induction of 1500 recruits to the JMPD (Johannesburg Police Department) training course, Johannesburg, South Africa, 18 October 2017. The JMPD is the local “city police” for the city which is the biggest in the country. With crime level still way above world average levels the new recruits are much needed. (Photo by Kim Ludbrook/EPA/EFE) 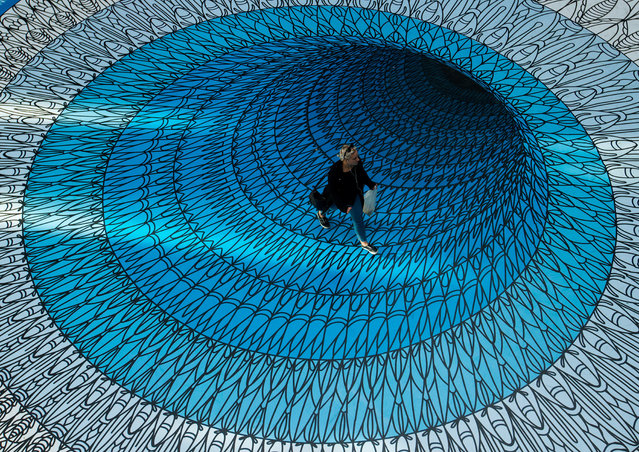