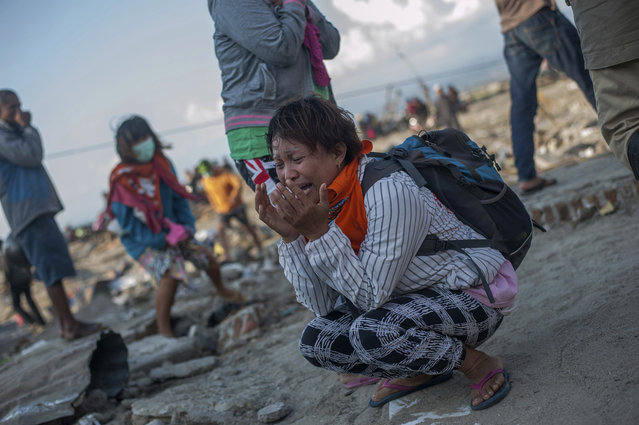 Residents react as rescuers recover the body of a tsunami victim in a village heavily damaged by Friday's tsunami in Palu, Central Sulawesi, Indonesia Indonesia, Wednesday, October 3, 2018. Aid have yet to reach the hardest-hit areas around Palu, the largest city heavily damaged in the earthquake and tsunami that hit on Friday, Sept. 28. (Photo by Fauzy Chaniago/AP Photo) 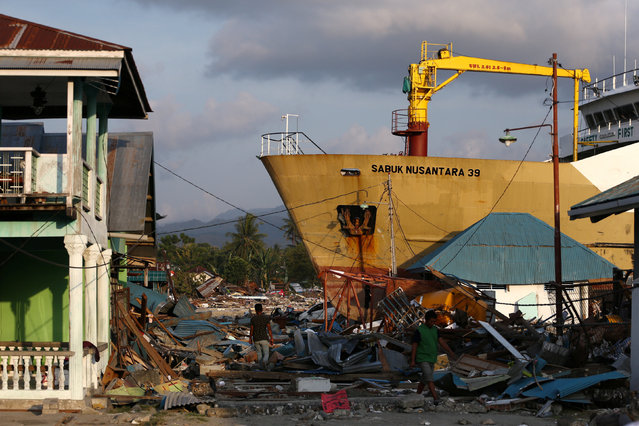 A local residents affected by the earthquake and tsunami walks next to a ship stranded on the shore in Wani, Donggala, Central Sulawesi, Indonesia, October 3, 2018. (Photo by Athit Perawongmetha/Reuters) 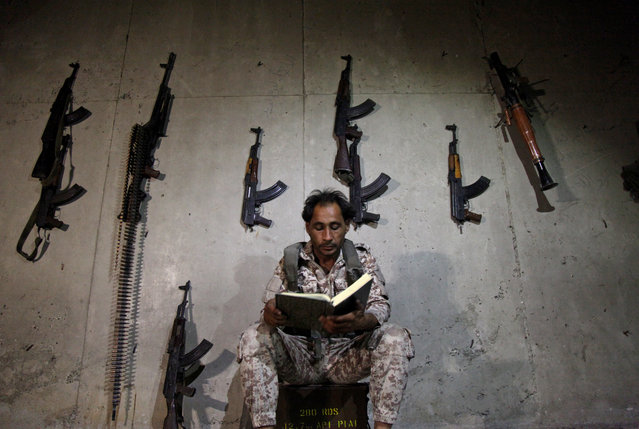 A Syrian rebel fighter reads the Koran as he sits in a fortified position held by a rebel group under the umbrella of the recently-formed National Liberation Front, in Al-Zahraa suburb on the western outskirts of the northern city of Aleppo on October 3, 2018. (Photo by Amer Alhamwe/AFP Photo) 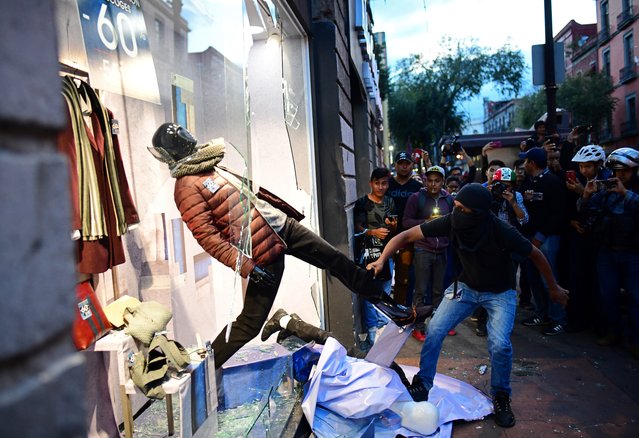 Hooded demonstrators vandalise a shop window in Mexico City, during the commemoration of the 50th anniversary of the 1968 Tlatelolco student massacre, on October 2, 2018. Fifty years ago, Mexican troops opened fire on student demonstrators, killing hundreds just days before Mexico City hosted the 1968 Olympics – one of the darkest episodes in a year of global turbulence. (Photo by Ronaldo Schemidt/AFP Photo) 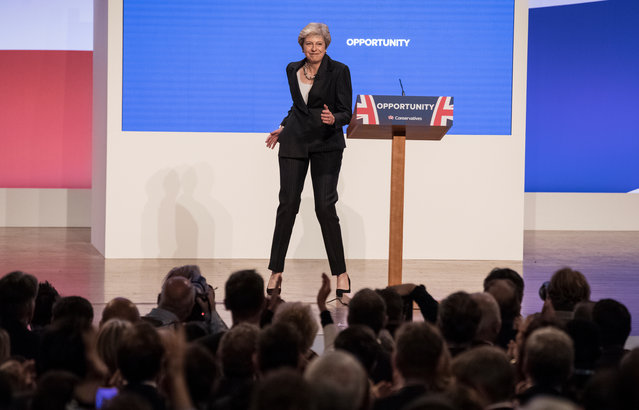 British Prime Minister Theresa May delivers her leader's speech during the final day of the Conservative Party Conference at The International Convention Centre on October 3, 2018 in Birmingham, England. Theresa May delivered her leader's speech to the 2018 Conservative Party Conference today. Appealing to the 'decent, moderate and patriotic', she stated that the Conservative Party is for everyone who is willing to “work hard and do their best”. This year's conference took place six months before the UK is due to leave the European Union, with divisions on how Brexit should be implemented apparent throughout. (Photo by Sean Smith/The Guardian) 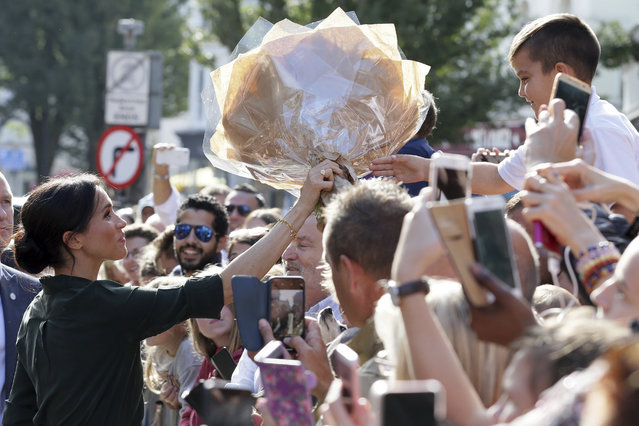 Meghan, Duchess of Sussex received a bunch of flowers from well-wishers during a visit to the Pavilion Building in Brighton, England, Wednesday, October 3, 2018. The Duke and Duchess of Sussex made their first joint official visit to Sussex. (Photo by Tim Ireland/AP Photo/Pool) 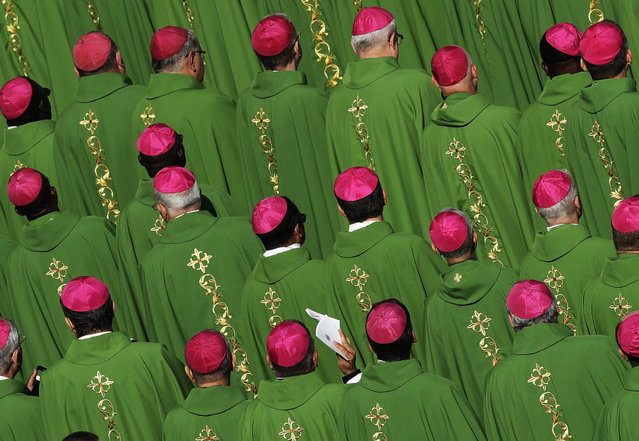 Bishops attend a Mass celebrated by Pope Francis for the opening of a synod in St. Peter's Square, at the Vatican, Wednesday, October 3, 2018. The synod (council) is bringing together 266 Roman Catholic bishops from five continents for talks on helping young people feel called to the church at a time when church marriages and religious vocations are plummeting in much of the West. (Photo by Alessandra Tarantino/AP Photo) 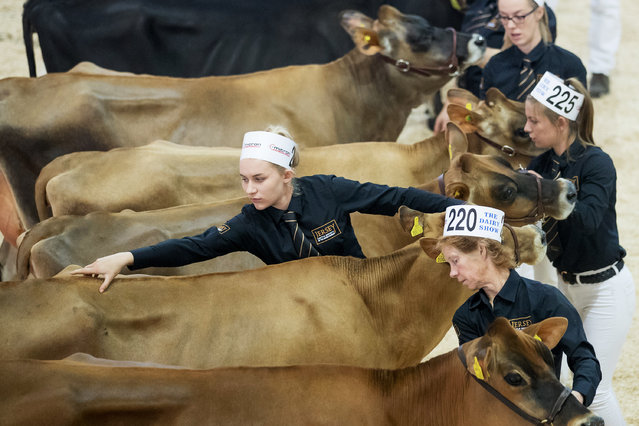 Cows are judged at the Bath and West Diary Show, the UK's largest diary show, at the Royal Bath and West Showground on October 3, 2018 in Somerset, England. With the UK due to exit the EU in less than six months, a great deal of uncertainty still surrounds the future of the agricultural industry. (Photo by Matt Cardy/Getty Images) 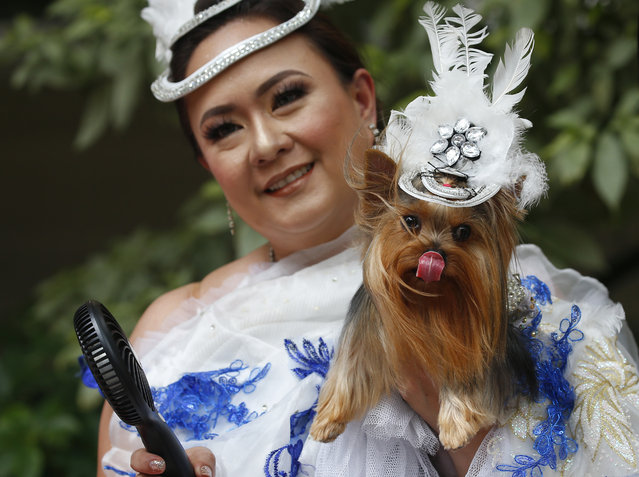 Gina Evangelista uses a portable fan to cool her Yorkshire Terrier pet named "Georgine" prior to having its paws cast in a molding clay at a shopping mall's Hollywood version of its "Walk of Fame”, in a prelude to Sunday's blessing of animals in celebration of the feast day of St. Francis of Assisi Wednesday, October 3, 2018, Manila, Philippines. Pets are traditionally blessed every first Sunday of October to celebrate the feast day of Saint Francis of Assisi, considered the patron saint of animals and environment by the Catholic Church. (Photo by Bullit Marquez/AP Photo) 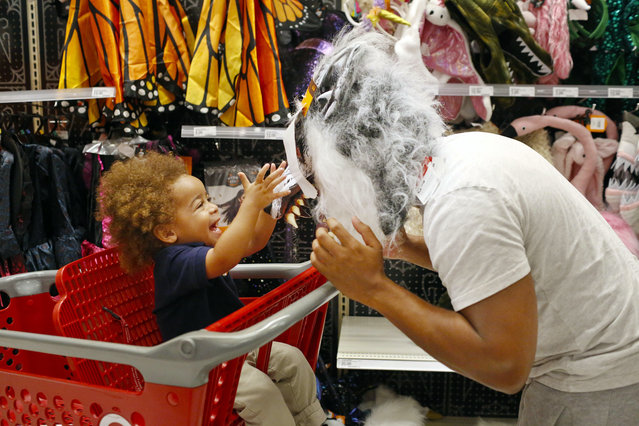 Liam Vasquez, 2, left and his father, Will Vasquez, right, try on Halloween masks at a Target department store on Wednesday, October 3, 2018, in Pembroke Pines, Fla. Discounters like Walmart and Target are expanding their costume offerings and creating designated sections where customers can find more of their Halloween needs in one place. (Photo by Brynn Anderson/AP Photo)
Edit Del
04 Oct 2018 08:20:00, post received 0 comments
Publication archive:
←   →
Popular tags:
All tags
Last searches: