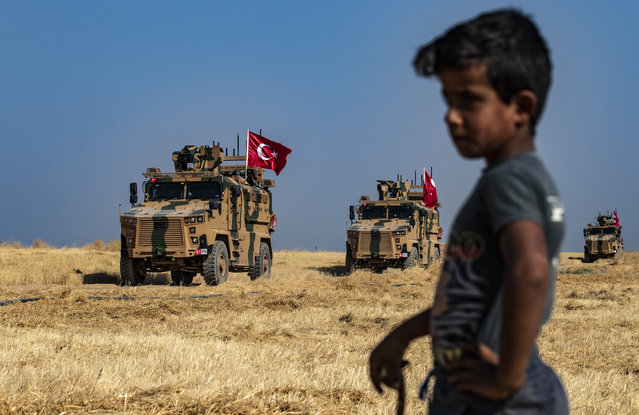 A Syrian boy watches as Turkish military vehicles, part of a US military convoy, take part in joint patrol in the Syrian village of al-Hashisha on the outskirts of Tal Abyad town along the border with Turkey, on October 4, 2019. The United States and Turkey began joint patrols in northeastern Syria aimed at easing tensions between Ankara and US-backed Kurdish forces. (Photo by Delil Souleiman/AFP Photo) 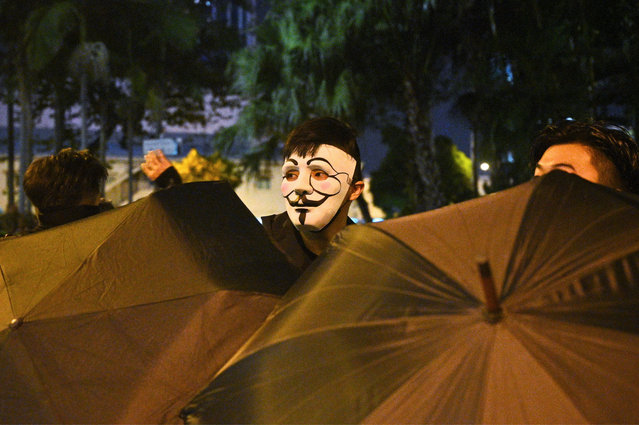 A protester wearing a mask takes part in a protest in the Wanchai district in Hong Kong on October 4, 2019, after people hit the streets when the government earlier announced a ban on facemasks. Hong Kong's leader on October 4 invoked a rarely used colonial-era emergency law to ban people from wearing face masks in a bid to put an end to months of violent protests. (Photo by Philip Fong/AFP Photo) 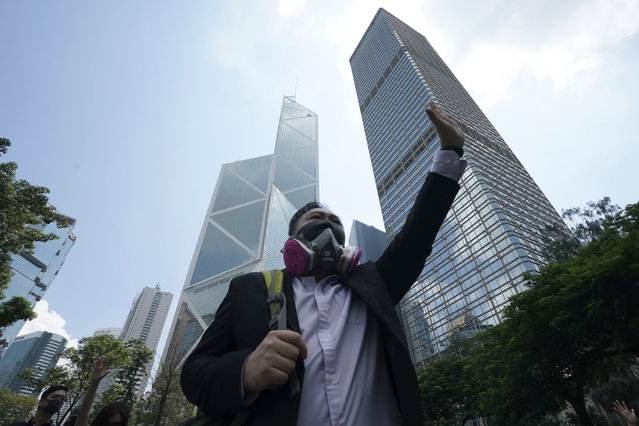 A protester wears a gas mask and holds up his hand to represent the five demands in Hong Kong Friday, October 4, 2019. Hong Kong pro-democracy protesters marched in the city center ahead of reported plans by the city’s embattled leader to deploy emergency powers to ban people from wearing masks in a bid to quash four months of anti-government demonstrations. (Photo by Vincent Thian/AP Photo) 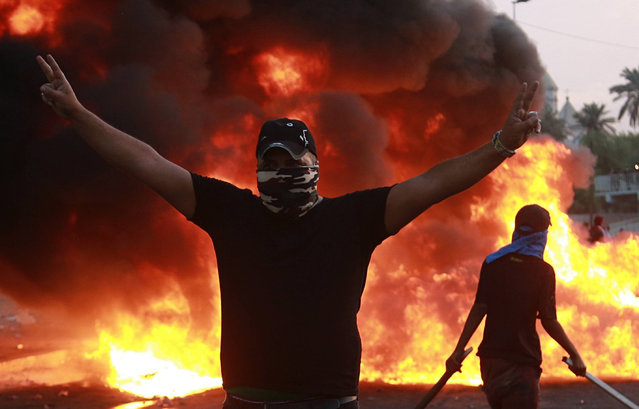 An anti-government protester flashes the victory sign during a demonstration in Baghdad, Iraq, Thursday, October 3, 2019. Iraqi security forces fired live bullets into the air and used tear gas against a few hundred protesters in central Baghdad on Thursday, hours after a curfew was announced in the Iraqi capital on the heels of two days of deadly violence that gripped the country amid anti-government protests that killed several people in two days. (Photo by Hadi Mizban/AP Photo) 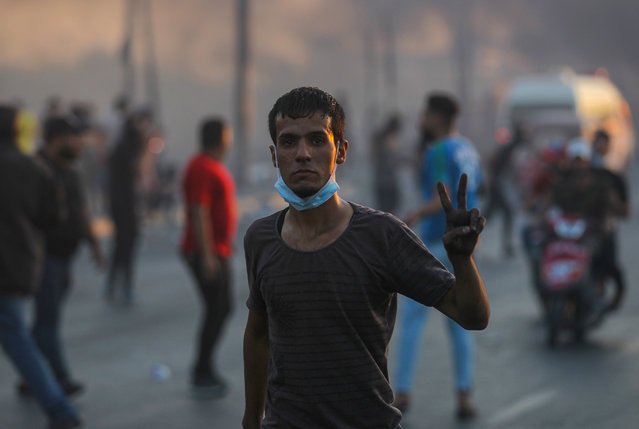 An Iraqi demonstrator gestures with the v-sign for victory during a demonstration against state corruption, failing public services, and unemployment, in the Iraqi capital Baghdad on October 5, 2019. Renewed protests took place under live fire in Iraq's capital and the country's south Saturday as the government struggled to agree a response to days of rallies that have left nearly 100 dead. The largely spontaneous gatherings of demonstrators -- whose demands have evolved since they began on Tuesday from employment and better services to fundamental government change -- have swelled despite an internet blackout and overtures by the country's elite. Hours after a curfew in Baghdad was lifted on Saturday morning, dozens of protesters rallied around the oil ministry in the capital, facing live rounds fired in their direction, an AFP photographer said. (Photo by Ahmad Al-Rubaye/AFP Photo) 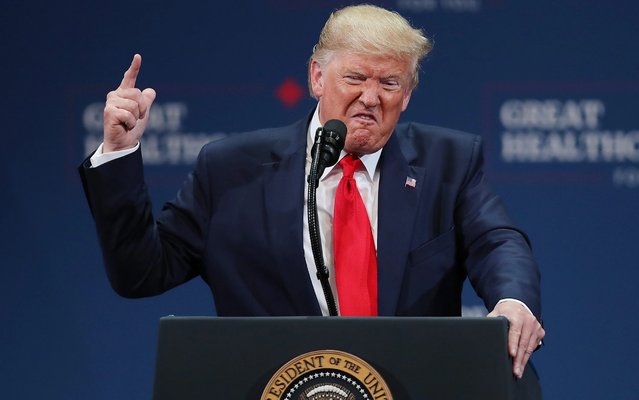 U.S. President Donald Trump speaks during an event at the Sharon L. Morse Performing Arts Center in The Villages on October 03, 2019 in The Villages, Florida. President Trump spoke about Medicare, and signed an executive order calling for further privatizing of it. (Photo by Joe Raedle/Getty Images) 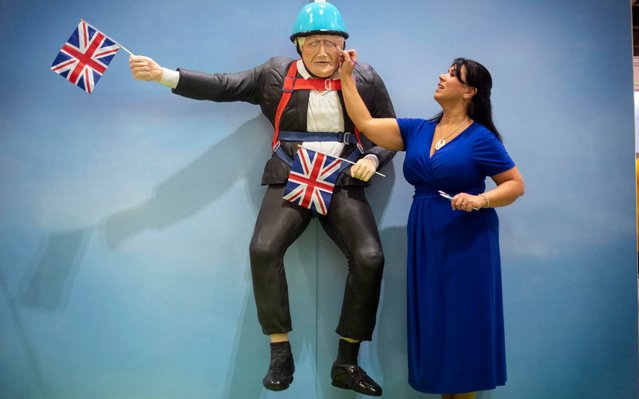 Cake maker Rosie Dummer makes the final touches to a life-sized Boris Johnson cake at the Cake and Bake Show at ExCeL in London, England on October 4, 2019. (Photo by Victoria Jones/PA Images via Getty Images) 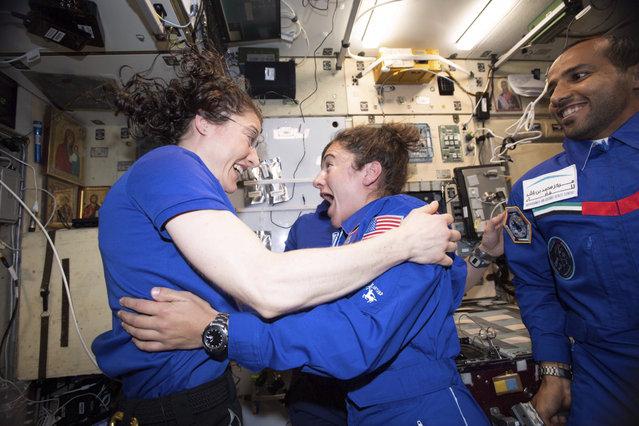 In this photo made available by NASA astronaut Jessica Meir on September 29, 2019, Christina H. Koch, left, and Meir greet each other after Meir's arrival on the International Space Station. On Friday, Sept. 4, 2019, NASA announced that the International Space Station’s two women will pair up for a spacewalk on Oct. 21 to plug in new batteries. (Photo by NASA via AP Photo) 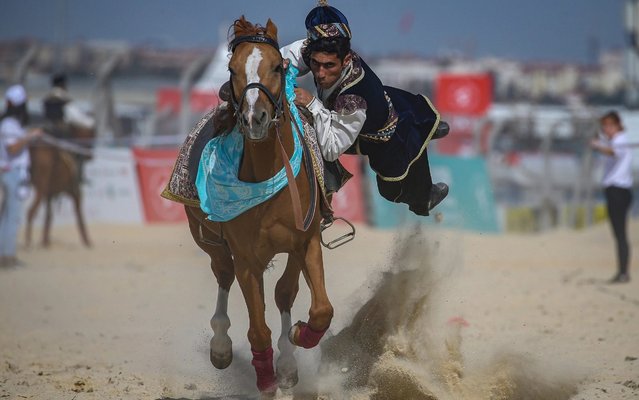 Mounted team of Azerbaijan-Montenegro perform demonstration during the 4th Etnospor Culture Festival held at Ataturk Airport, Istanbul, Turkey on October 04, 2019. The Etnospor Culture Festival is organised for the fourth time at Ataturk Airport by the World Ethnospor Confederation. The Festivals aim is to support traditional sports and convey culture and traditions to the next generations. Visitors can observe ancestor sports in 12 different branch in addition to historic crafts workshops and activities about traditional life. Nearly 1,000 athletes will compete in the festival in 12 traditional sports including archery, oil wrestling, belt wrestling, mounted javelin throwing, mancala and horseback archery. (Photo by Arif Hudaverdi Yaman/Anadolu Agency via Getty Images) 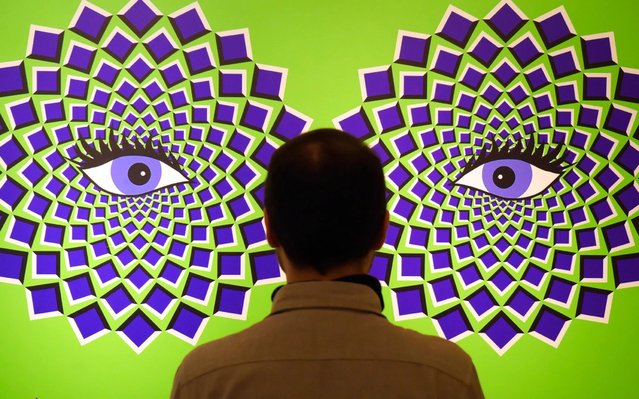 A man stands in front of a optical illusions picture during the press preview of the interactive experience exhibition “Tricked! – The spectacular illusion exhibition” at Augustusburg castle in Augustusburg, Germany, Tuesday, October 1, 2019. The show, which presents paintings by Mexican artist Yunuen Esparza, deals with the functioning of the eye, the laws of optics and the interconnection of the senses in the brain. The exhibition starts on Oct. 5, 2019. (Photo by Jens Meyer/AP Photo) 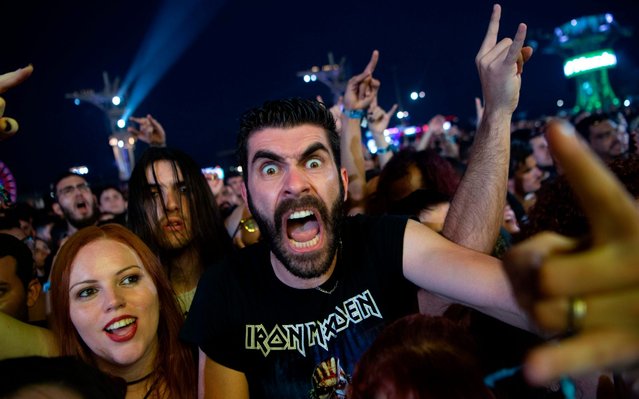 Fans of the Brazilian heavy metal band Sepultura enjoy their showo at the main stage of Rock in Rio festival 2019 at the Olympic Park, Rio de Janeiro, Brazil, on October 4, 2019. The week-long Rock in Rio festival started September 27, with international stars as headliners, over 700,000 spectators and social actions including the preservation of the Amazon. (Photo by Mauro Pimentel/AFP Photo)
Edit Del
07 Oct 2019 00:07:00, post received 0 comments
Publication archive:
←   →
Popular tags:
All tags
Last searches: