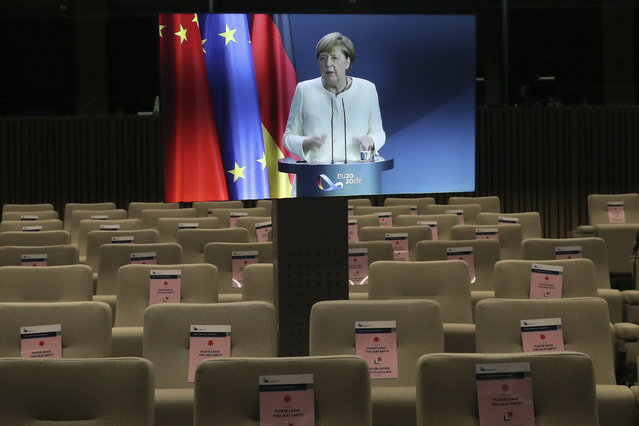 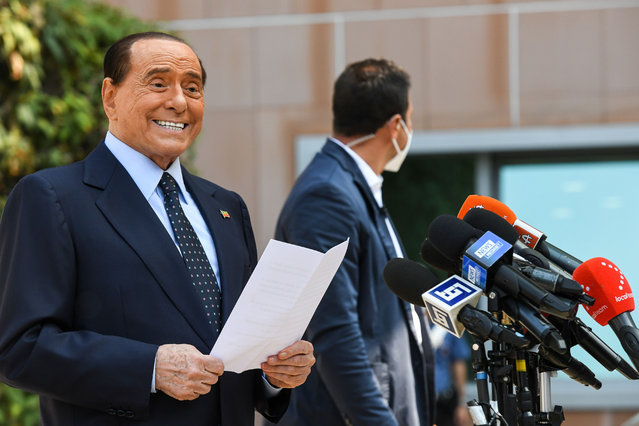 Former Italian prime minister Silvio Berlusconi addresses the media, as he leaves the San Raffaele Hospital in Milan on September 14, 2020 after he tested posititive for coronavirus and was hospitalied since September 3. (Photo by Piero Cruciatti/AFP Photo) 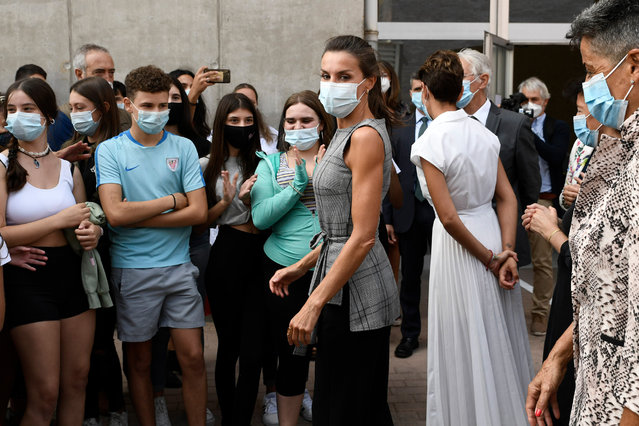 Queen Letizia of Spain is seen arriving to “EGA” school to celebrate the opening of the School Course 20-21 on September 14, 2020 in Navarra, Spain. (Photo by Carlos Alvarez/Getty Images) 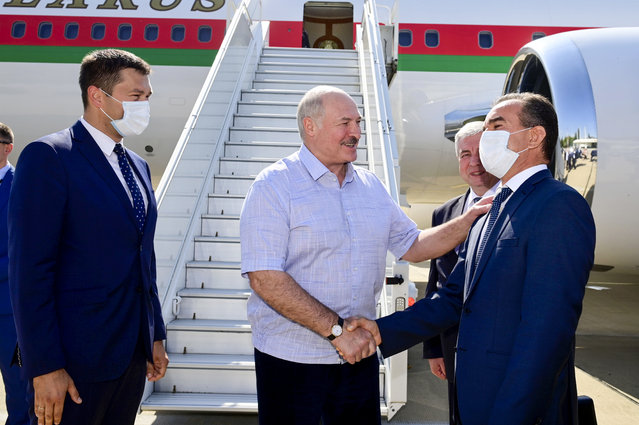 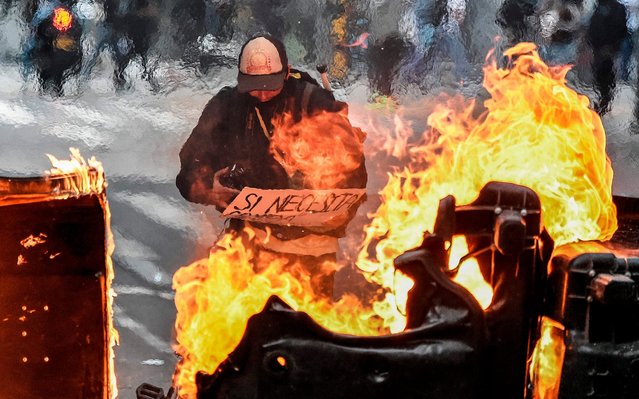 A man stands behind a burning barricade during the fifth straight day of protests against police brutality in Bogota on September 13, 2020. Bogota's Mayor Claudia Lopez, apologized this Sunday for the abuses of the public force, in a ceremony that gathered relatives of the dead and wounded during the bloody protests that broke out five days ago against police brutality in Colombia. (Photo by Juan Barreto/AFP Photo) 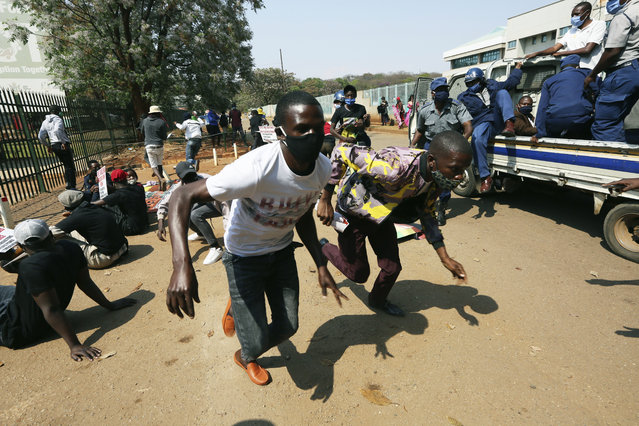 Zimbabwe University students run away from police during a protest outside the magistrates courts in Harare, Monday, September 14, 2020. Police broke up the protest and arrested some students demonstrating in support of a university union leader who was making a court appearance following his arrest for protesting against human rights abuses in the country. (Photo by Tsvangirayi Mukwazhi/AP Photo) 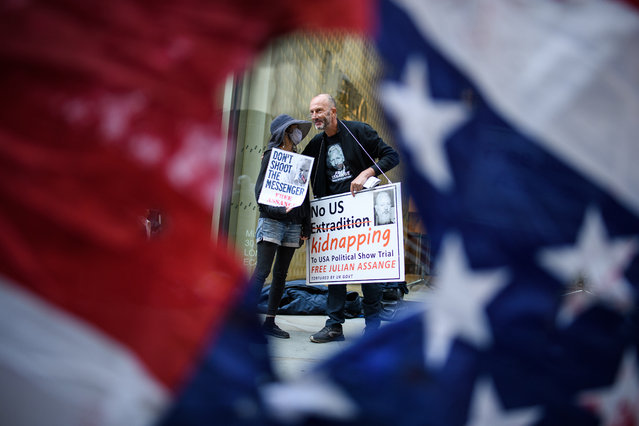 Supporters of the Wikileaks founder Julian Assange are seen through a torn US flag as they gather outside the Old Bailey on September 14, 2020 in London, England. Mr. Assange is fighting an extradition request by the United States on charges of hacking and espionage, avoided for years by seeking refuge in London's Ecuadorian embassy in 2012. (Photo by Leon Neal/Getty Images) 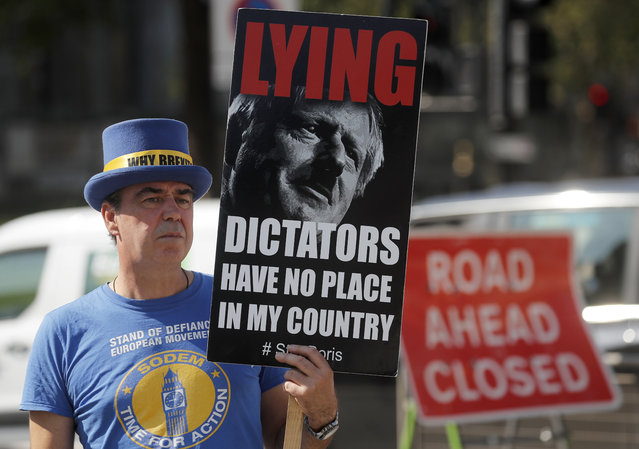 A pro EU protester stands near Parliament in London, Monday, September 14, 2020. Boris Johnson is facing the possibility of a Tory rebellion and major damage to his chances of a trade deal with the EU unless he removes controversial parts of the internal Bill which is in the House of Commons for its second reading Monday. (Photo by Frank Augstein/AP Photo) 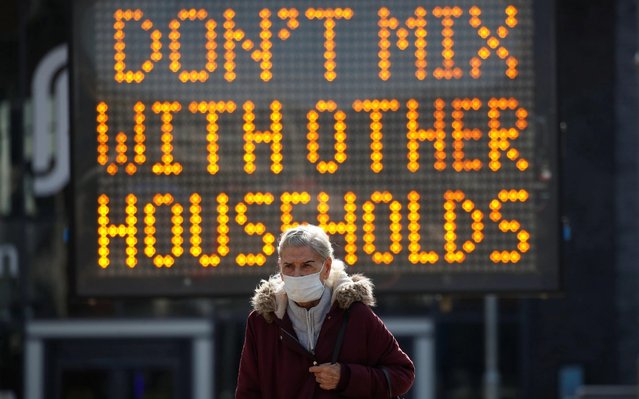 A woman walks past an information board following the outbreak of the coronavirus disease (COVID-19) in Bolton, Britain, September 14, 2020. (Photo by Phil Noble/Reuters) 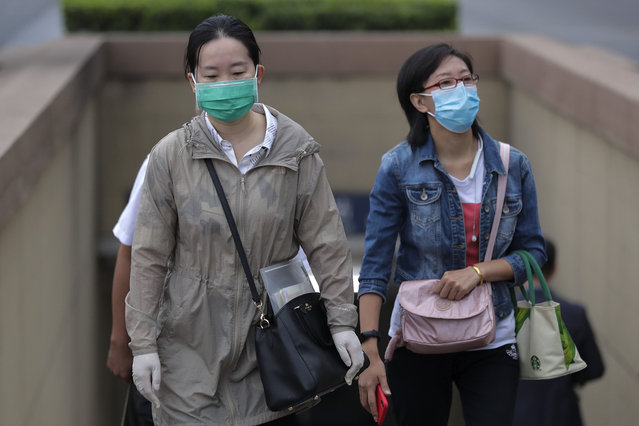 Women wearing face masks to help curb the spread of the coronavirus walk out from a subway station in Beijing, Tuesday, September 15, 2020. Even as China has largely controlled the outbreak, the coronavirus is still surging across other parts of the world. (Photo by Andy Wong/AP Photo) 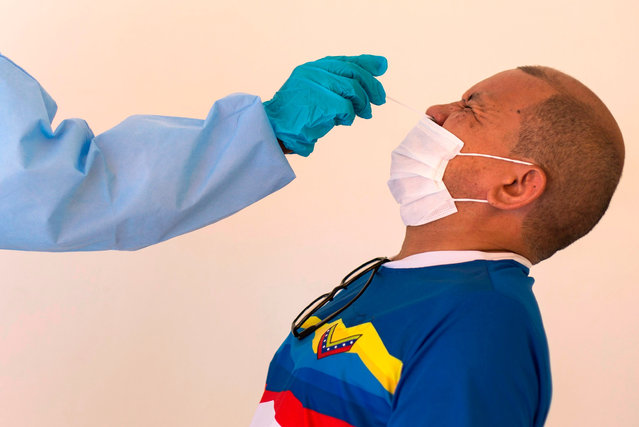 Public Health personnel from the Dominican Republic performs a PCR test to a Venezuelan stranded in the country since the quarantine against the COVID-19 novel coronavirus was imposed, at the Venezuelan embassy in Santo Domingo on September 14, 2020. About 200 Venezuelans stranded in the Dominican Republic are scheduled to return to their country on September 17 in a Conviasa flight. (Photo by Erika Santelices/AFP Photo) 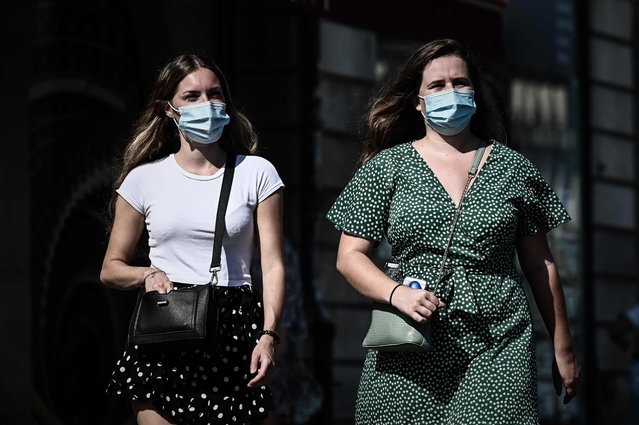 Pedestrians wearing protective face masks due to the COVID-19 disease caused by the novel coronavirus, walk in a street of Bordeaux, southwestern France, on September 14, 2020. (Photo by Philippe Lopez/AFP Photo) 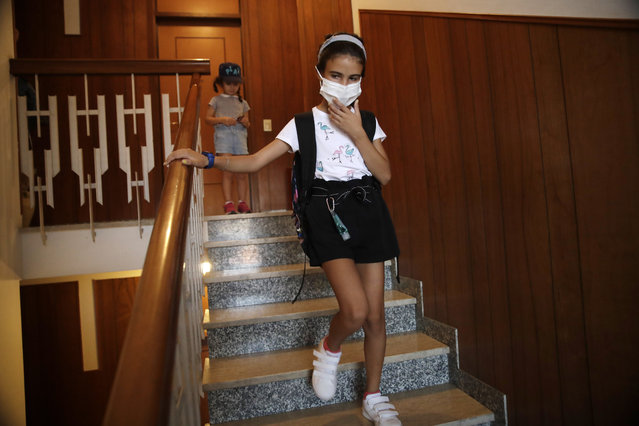 Ten-year-old Cecilia Rungi leads her four-year-old sister Camilla as they leave home to head to school in Codogno, Italy, Monday, September 14, 2020. The morning bell Monday marks the first entrance to the classroom for the children of Codogno since Feb. 21, when panicked parents were sent to pick up their children after the northern Italian town gained notoriety as the first in the West to record local transmission of the coronavirus. (Photo by Luca Bruno/AP Photo) 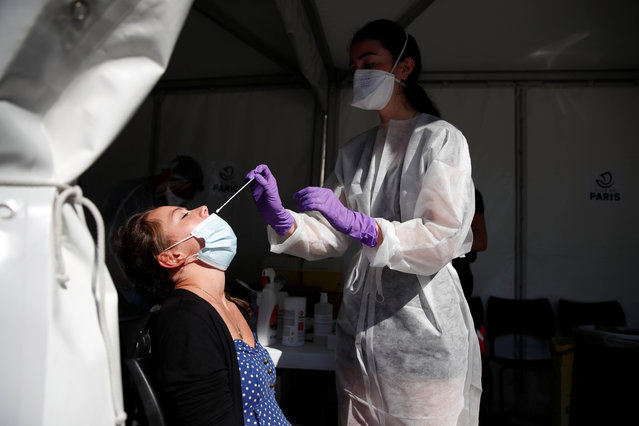 A health worker, wearing a protective suit and a face mask, prepares to administer a nasal swab to a patient at a testing site for the coronavirus disease (COVID-19) in Paris, France, September 14, 2020. France sees a substantial increase of Covid-19 cases. (Photo by Gonzalo Fuentes/Reuters) 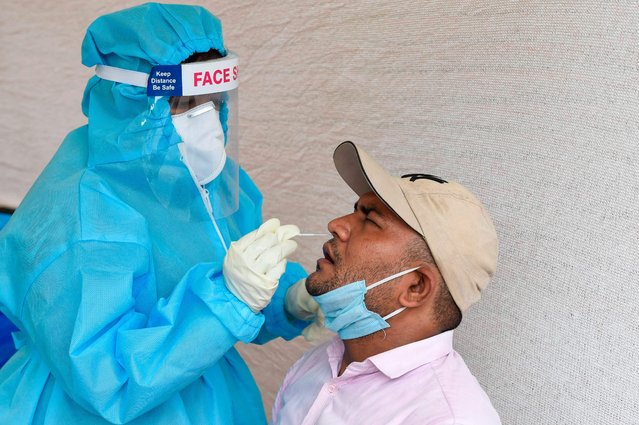 A health worker collects a swab sample from a man to test for the Covid-19 coronavirus at a roadside testing booth in Ahmedabad on September 14, 2020. India's coronavirus cases are now the second-highest in the world and only behind the United States. (Photo by Sam Panthaky/AFP Photo) 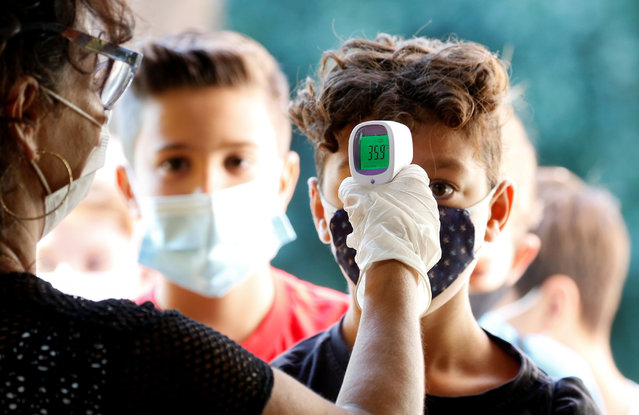 A pupil has his temperature checked as children return to the Simonetta Salacone primary and secondary school for the first time since March, adhering to strict regulations to avoid coronavirus disease (COVID-19) contagion, in Rome, Italy, September 14, 2020. (Photo by Remo Casilli/Reuters) 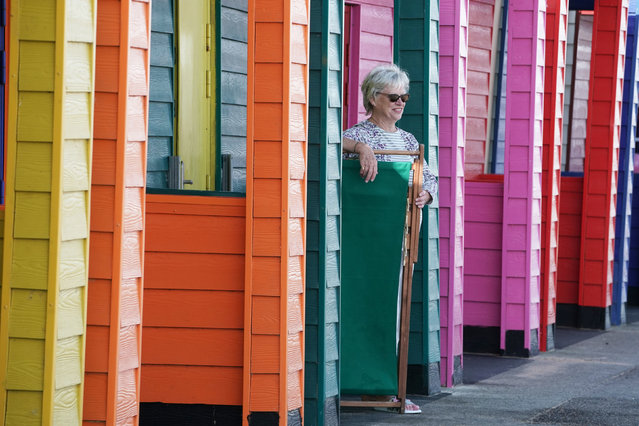 A woman enjoying the sunny weather on the pier at Saltburn-by-the-Sea, North Yorkshire on September 14, 2020, at the start of a week in which the UK is expected to bask in temperatures of more than 30° C. (Photo by Owen Humphreys/PA Images via Getty Images) 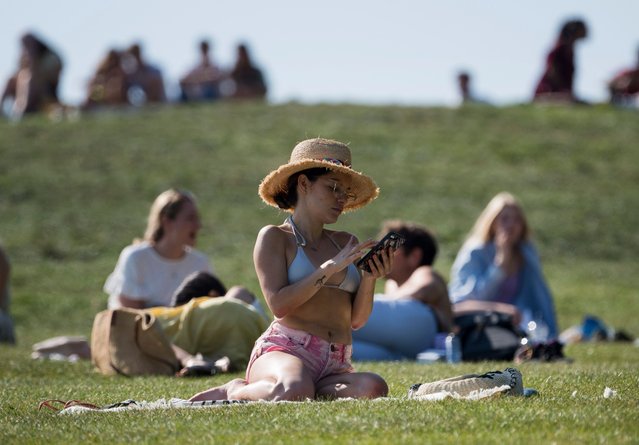