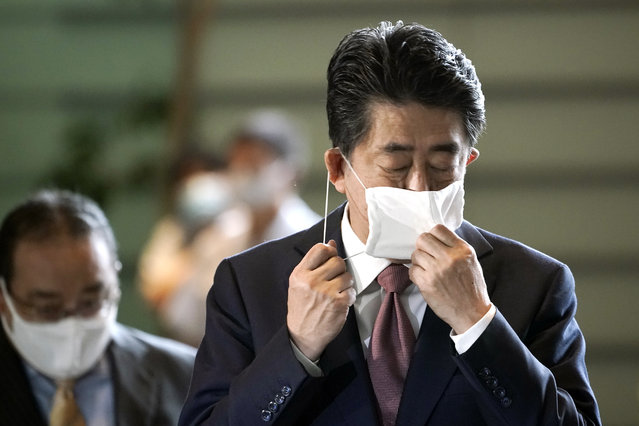 Japan's outgoing Prime Minister Shinzo Abe takes off his face mask as he arrives at the prime minister's office for a cabniet meeting Wednesday, September 16, 2020, in Tokyo. Abe and his Cabinet resigned, clearing the way for his successor Yoshihide Suga to take over after parliamentary confirmation later in the day. (Photo by Eugene Hoshiko/AP Photo) 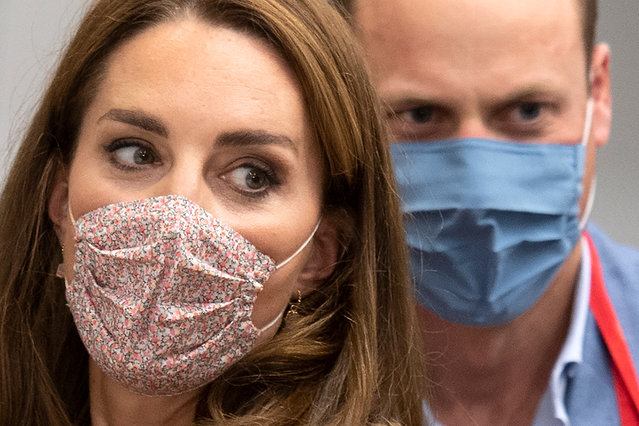 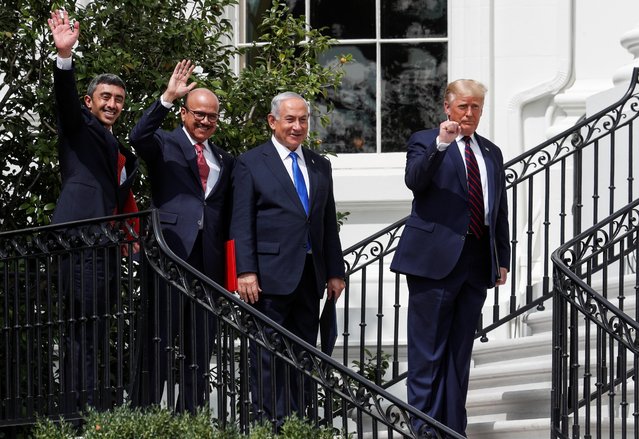 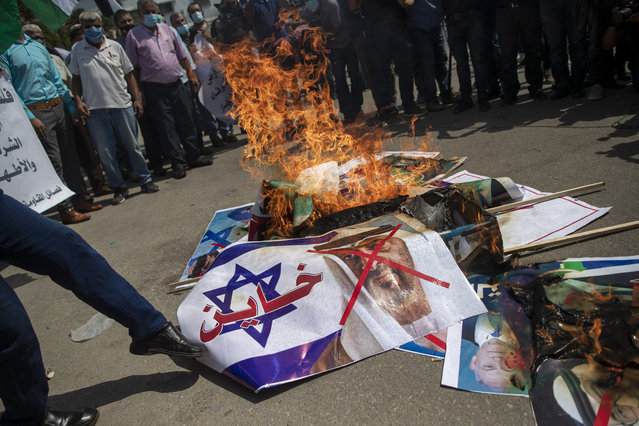 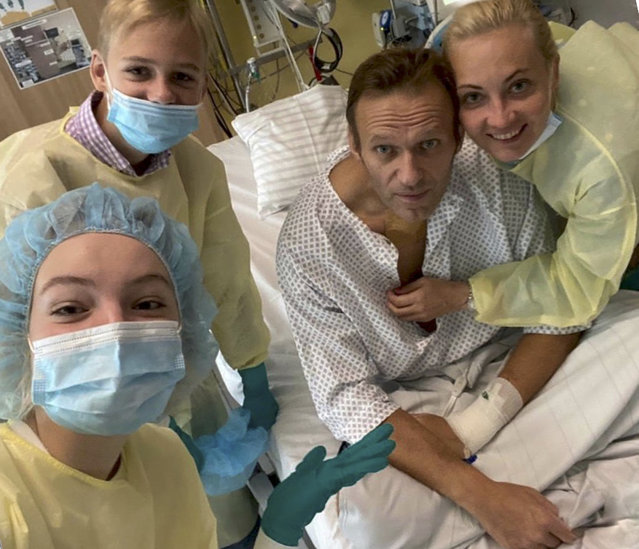 This handout photo published by Russian opposition leader Alexei Navalny on his instagram account, shows himself, centre, and his wife Yulia, right, posing for a photo with medical workers in a hospital hospital in Berlin, Germany. Russian opposition leader Alexei Navalny has posted the picture of himself in a hospital in Germany and says he's breathing on his own. He posted on Instagram Tuesday September 15, 2020: “Hi, this is Navalny. I have been missing you. I still can't do much, but yesterday I managed to breathe on my own for the entire day”. (Photo by Navalny instagram via AP Photo) 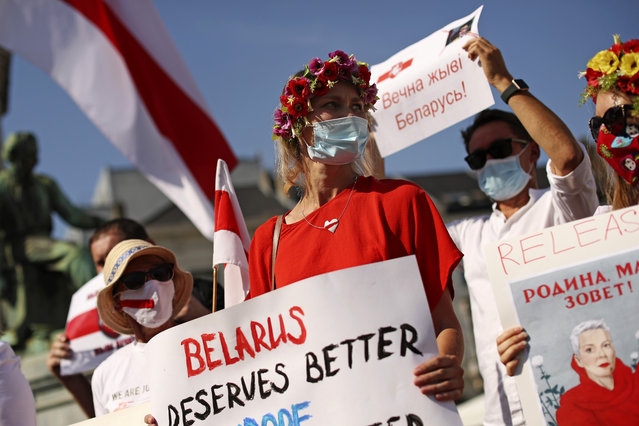 People shout slogans during a small protest against Belarusian President Alexander Lukashenko outside the European Parliament in Brussels, Tuesday, September 15, 2020. Protesters in Belarus have dismissed Lukashenko's re-election for a sixth term in the Aug. 9 presidential vote as rigged, and massive demonstrations have entered their sixth week. The United States and the European Union have both criticized the election as neither free nor fair and urged the Belarusian leader to engage in talks with the opposition, a demand he has rejected. (Photo by Francisco Seco/AP Photo) 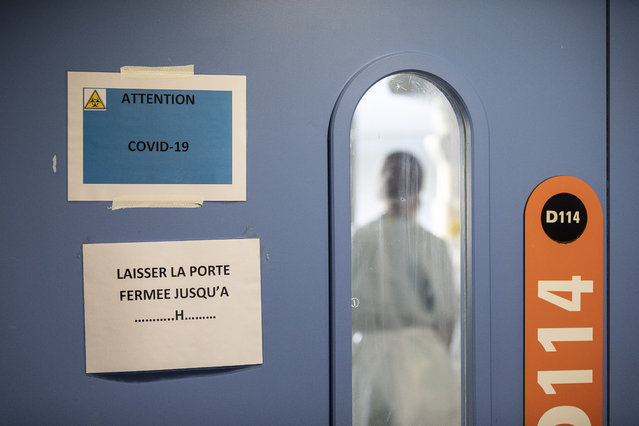 A nurse is seen in a COVID-19 area of the Nouvel Hospital Civil of Strasbourg, Eastern France, Tuesday, September 15, 2020. France is grappling with the double headache of trying revive its COVID-battered economy while also curbing the steady climb in infections spread during summer months when vacationers let their guard down and picked up by increased testing. (Photo by Jean-Francois Badias/AP Photo) 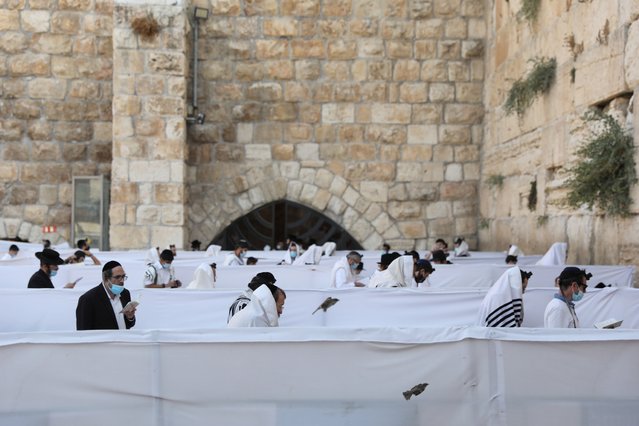 Orthodox Jews wearing masks pray at the separation partitions at the Prayer Plaza of the Western Wall in the Old city of Jerusalem, Israel, 15 September 2020. The Israeli cabinet approved a full three-week lockdown during the Jewish holidays period beginning on 18 September 2020, aimed to prevent the spread of coronavirus. (Photo by Abir Sultan/EPA/EFE) 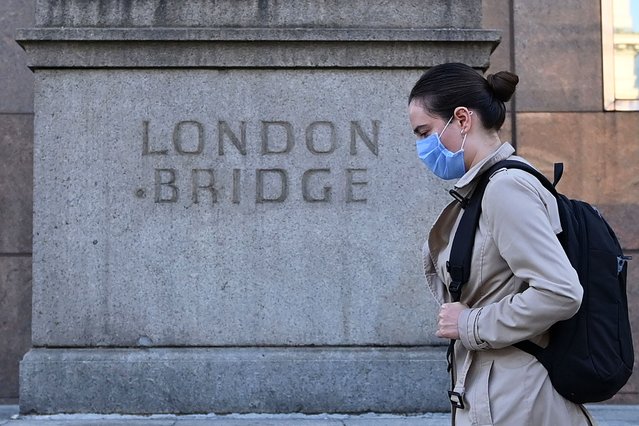 A commuter walks across London Bridge toward the City of London on September 15, 2020. Britain's unemployment rate jumped above four percent in July on economic fallout from the coronavirus pandemic, official data showed today. (Photo by Justin Tallis/AFP Photo) 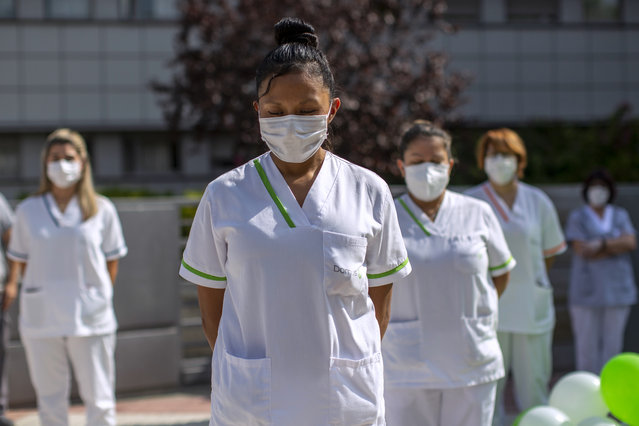 Workers of a nursing home “DomusVi Arturo Soria” hold a minute of silence in support of the social and health sector and its workers in Madrid, Spain, Tuesday, September 15, 2020. After ending a strict lockdown in June having brought under control the virus transmission, Spain is now the European country where a second wave of the contagion is being more noticed. (Photo by Manu Fernandez/AP Photo) 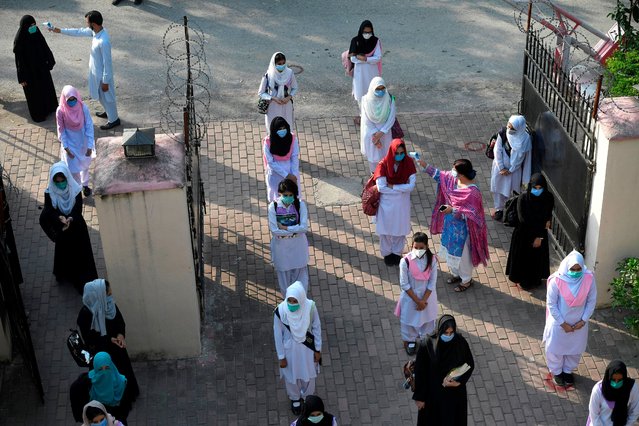 Teachers check the body temperature of students at the entrance of the Islamabad Model College of Commerce for Girls in Islamabad on September 15, 2020 after the educational institutes were reopened nearly six months after the spread of the Covid-19 coronavirus. (Photo by Aamir Qureshi/AFP Photo) 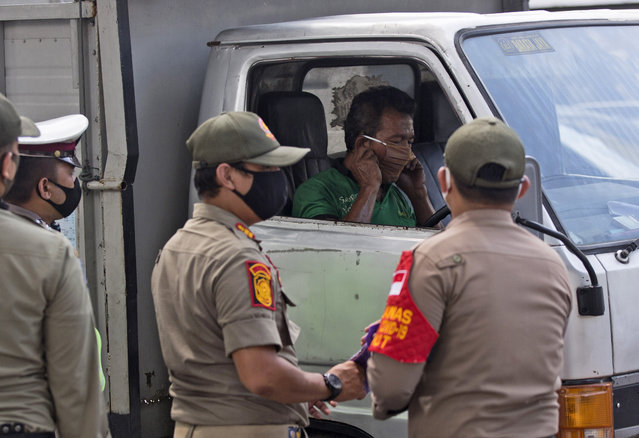 A truck driver puts on a mask given to him by Public Order Agency officers at a check point set up to enforce a city regulation requiring people to wear face masks in public places as a precaution against the coronavirus outbreak, in Medan, North Sumatra, Indonesia, Tuesday, September 15, 2020. (Photo by Binsar Bakkara/AP Photo) 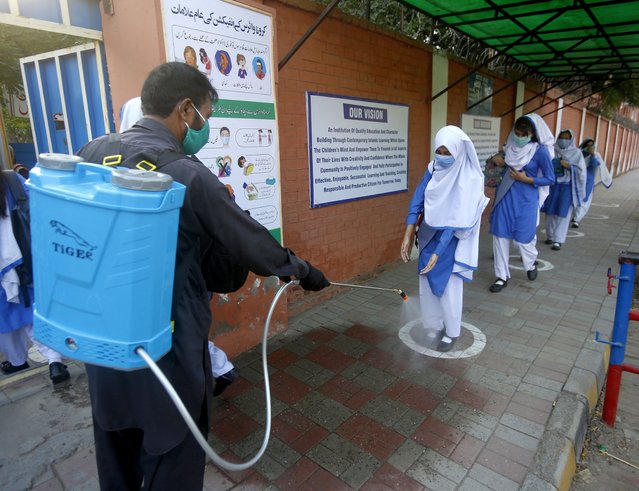 A worker disinfects shoes of a student upon her arrival at a school, in Lahore, Pakistan, Tuesday, September 15, 2020. Pakistani officials welcomed millions of children back to school following educational institutions reopened on Tuesday in the country amid a steady decline in coronavirus deaths and infections. (Photo by K.M. Chaudary/AP Photo) 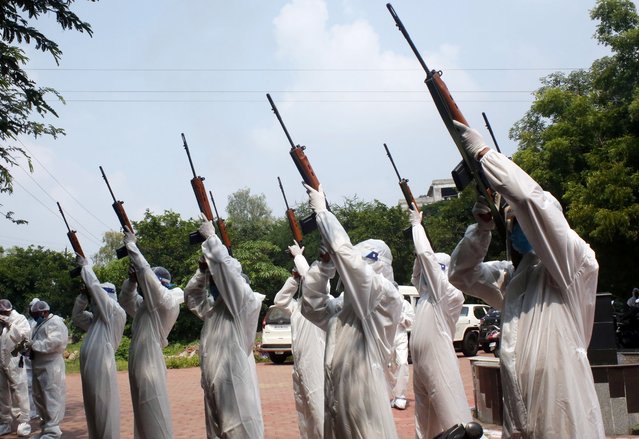 People wait in a queue to register their names to have their nasal swab samples taken to test for COVID-19 at a government hospital in Jammu, India, Tuesday, September 15, 2020. India confirmed more than 83,000 new coronavirus cases on Tuesday, bringing its total caseload to nearly 5 million. (Photo by Channi Anand/AP Photo) 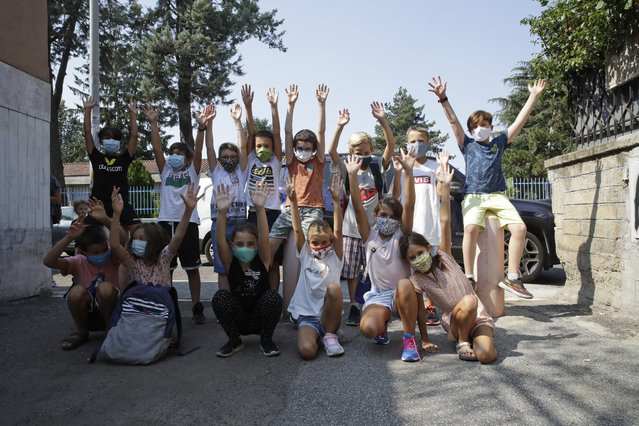 Children of the Mario Lodi primary school pose for group photo wearing masks to protect against COVID-19, at the end of their first day of school, in Rome, Tuesday, September 15, 2020. The reopening of Italian schools marks an important step in a return to pre-lockdown routine after six long months, long after the buzz returned to shopping malls, theaters and beaches, and another test of the government’s management of the pandemic. (Photo by Alessandra Tarantino/AP Photo) 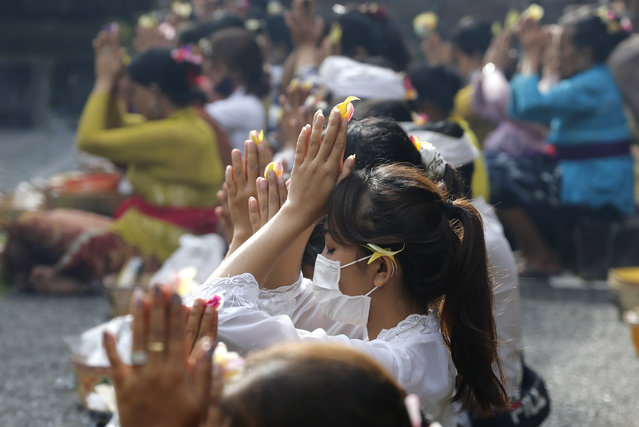 A woman wearing a face mask as a precaution against the new coronavirus outbreak during a Hindu ritual prayer at a temple in Bali, Indonesia on Wednesday, September 16, 2020. (Photo by Firdia Lisnawati/AP Photo) 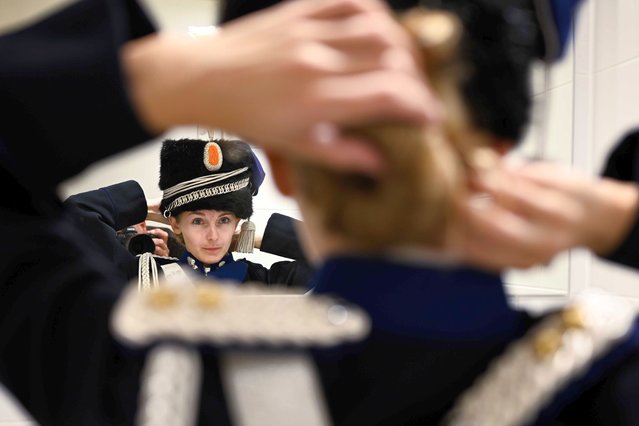 Members of the Royal Netherlands Marechaussee put on their ceremonial uniform at the Queen Beatrix Barracks in preparation for Prinsjesdag in The Hague, The Netherlands, 15 September 2020. Because of the coronavirus crisis, Prinsjesdag looks different than usual. Many of the ceremonial events are canceled. (Photo by Frank van Beek/EPA/EFE) 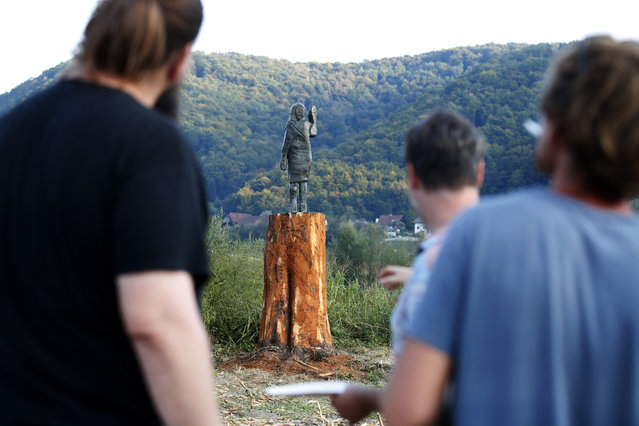 Local people look at a bronze statue representing the U.S first lady Melania Trump made by Brad Downey, a Berlin-based U.S. artist, is erected in her birthplace of Sevnica, Slovenia, Tuesday, September 15, 2020, after a previous one, made in wood, was set alight. Melania Trump was born and grew up in Slovenia before moving abroad as a fashion model. (Photo by AP Photo/Stringer) 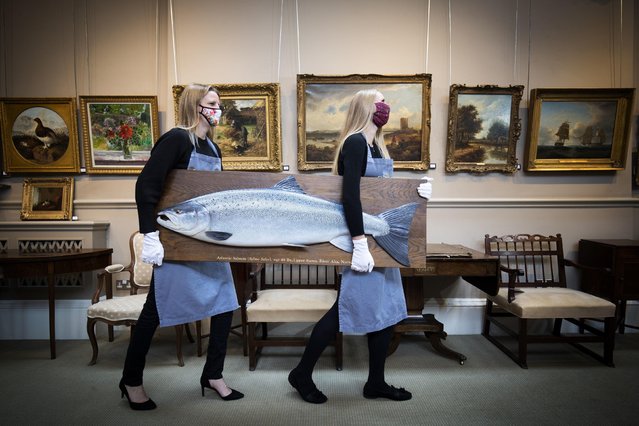