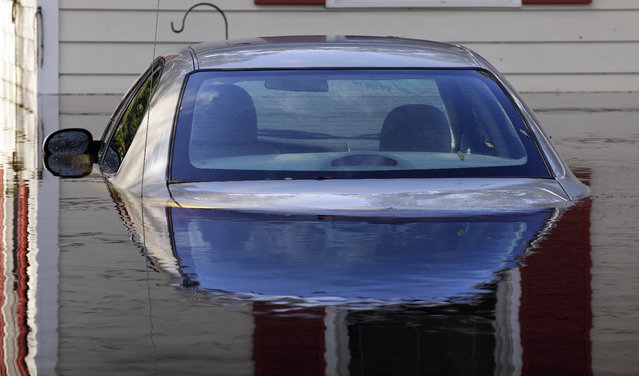 A submerged car sits surrounded by water outside a home in a flooded neighborhood in Lumberton, N.C., Monday, September 17, 2018, in the aftermath of Hurricane Florence. (Photo by Gerry Broome/AP Photo) 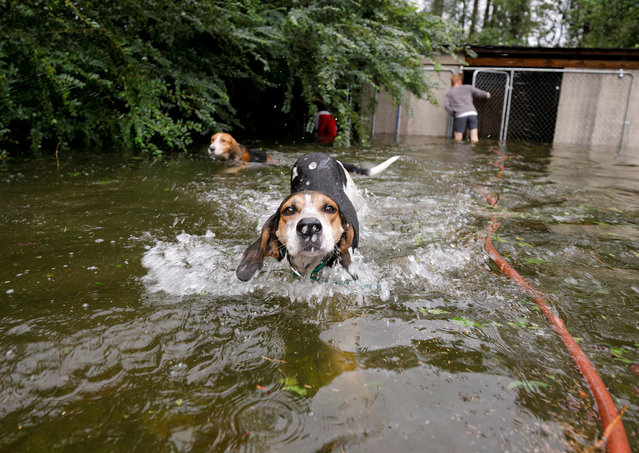 Panicked dogs that were left caged by an owner who fled rising flood waters in the aftermath of Hurricane Florence, swim free after their release in Leland, North Carolina, U.S., September 16, 2018. (Photo by Jonathan Drake/Reuters) 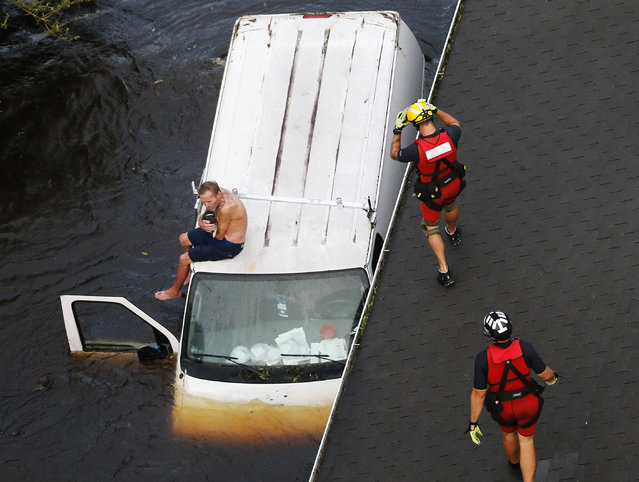 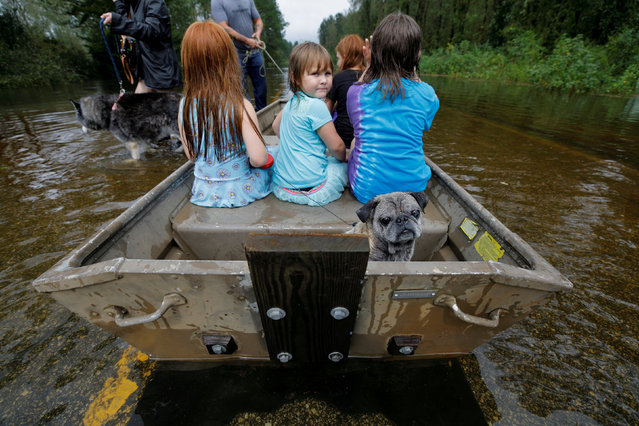 Iva Williamson, 4, peers behind her as she joins neighbors and pets in fleeing rising flood waters in the aftermath of Hurricane Florence in Leland, North Carolina, U.S., September 16, 2018. (Photo by Jonathan Drake/Reuters) 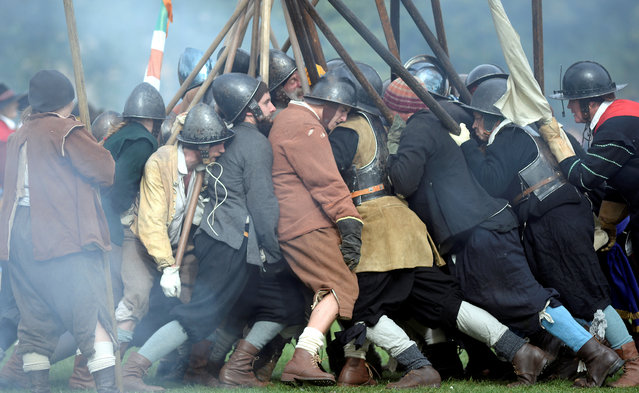 Cavaliers and Roundheads commemorate the 375th anniversary of the English civil war siege of Gloucester, UK on September 16, 2018. More than 100 people took part in a mock battle. (Photo by Paul Nicholls/Barcroft Images) 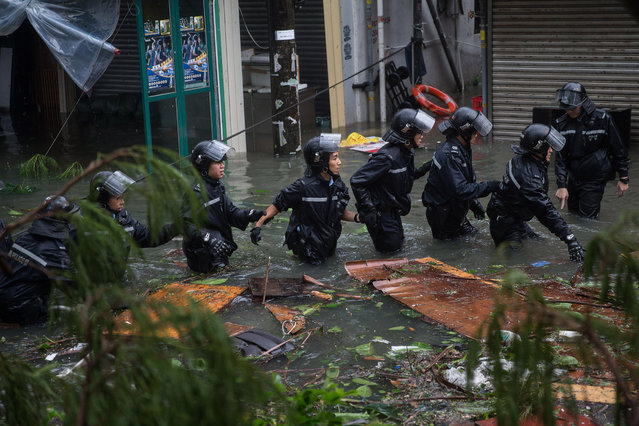 Police officers patrol a flooded street during a rescue operation due to Typhoon Mangkhut in Lei Yu Mun, Hong Kong, China, 16 September 2018. The No 10 typhoon warning was raised in the early hours as Typhoon Mangkhut sweeps past Hong Kong. (Photo by Jerome Favre/EPA/EFE) 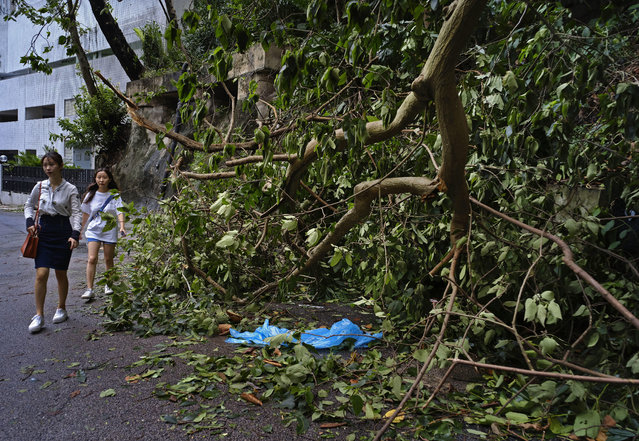 People walk past fallen trees caused by Typhoon Mangkhut outside a housing estate on the waterfront in Hong Kong, Monday, September 17, 2018. Hong Kong and southern China hunkered down as strong winds and heavy rain from Typhoon Mangkhut lash the densely populated coast. The biggest storm of the year left at least 28 dead from landslides and drownings as it sliced through the northern Philippines. (Photo by Vincent Yu/AP Photo) 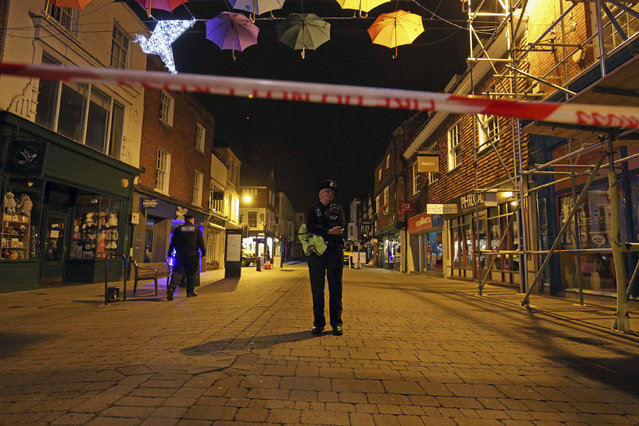 A police officer stands behind a cordon on the High Street in Salisbury, Britain, where police closed roads as a “precautionary measure” after two people were taken ill from the Prezzo restaurant, right in the background, Sunday, September 16, 2018. Police closed roads and called a hazardous response team Sunday night after two people became ill at the restaurant in the English city where a Russian ex-spy and his daughter were poisoned with a chemical nerve agent. The conditions of a man and woman who got sick at the restaurant was under investigation. (Photo by Jonathan Brady/PA Wire via AP Photo) 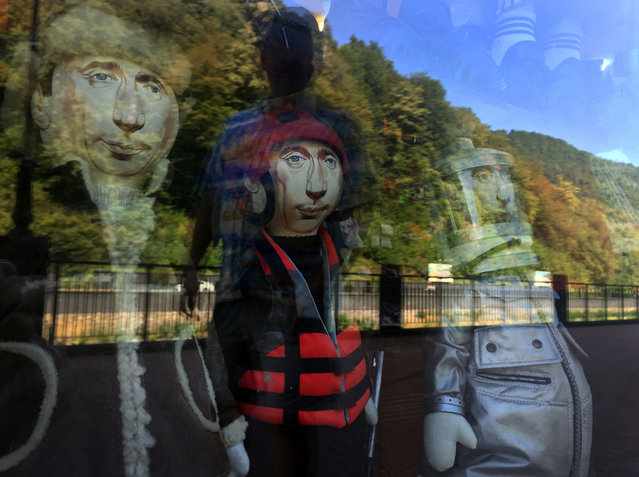 People walk past a souvenir shop displaying the dolls of Russian President Vladimir Putin at the embankment of the Mzymta river at Roza Khutor Mountain Resort, in Krasnaya Polyana on September 13, 2018, outside Sochi. President Vladimir Putin on Thursday visited Russia's largest-ever military drills in eastern Siberia, where he said Moscow planned to strengthen the country's armed forces. (Photo by Alexander Nemenov/AFP Photo) 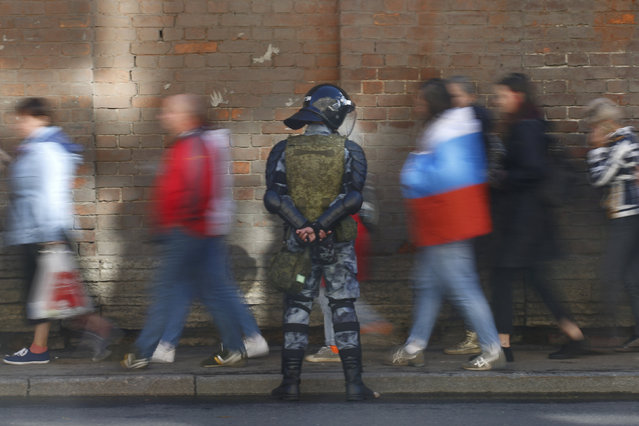 Protesters walk past an officer of the Russian National Guard during a rally against pension reforms, which envisage raising the retirement age, in St. Petersburg, Russia September 16, 2018. (Photo by Anton Vaganov/Reuters) 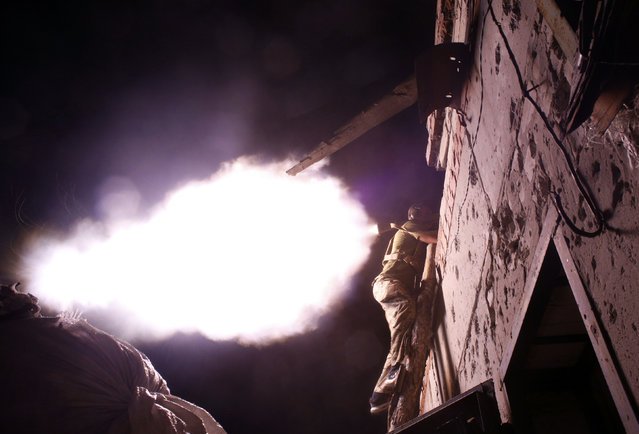 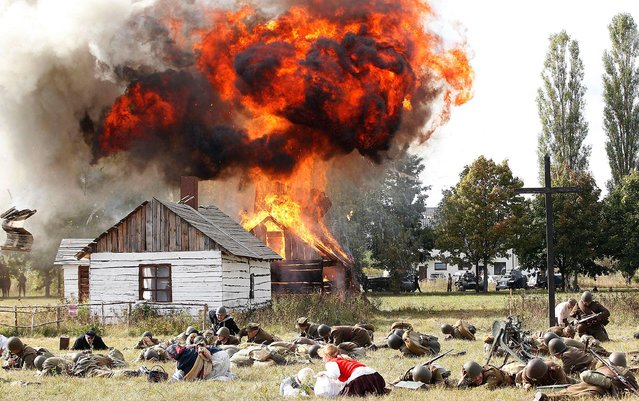 A historical re-enactment of a World War II battle shows the September 1939 attack by Nazi German tanks on Polish troops near the village of Lomianki , close to Warsaw, Poland, Sunday, September 16, 2018. Outnumbered Polish troops lost the battle in 1939 and German forces took control of Warsaw. (Photo by Czarek Sokolowski/AP Photo) 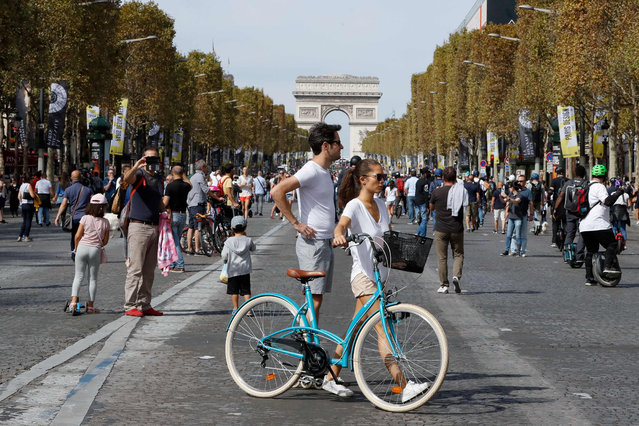 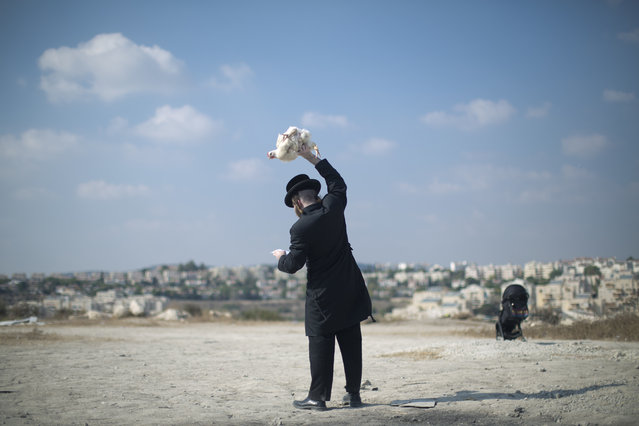 An Ultra-Orthodox Jewish man swings a chicken over his head as part of the Kaparot ritual in Beit Shemesh, Israel, Monday, September 17, 2018. Observant Jews believe the ritual transfers one's sins from the past year into the chicken, and is performed before the Day of Atonement, Yom Kippur, the holiest day in the Jewish year which starts at sundown Tuesday. (Photo by Oded Balilty/AP Photo) 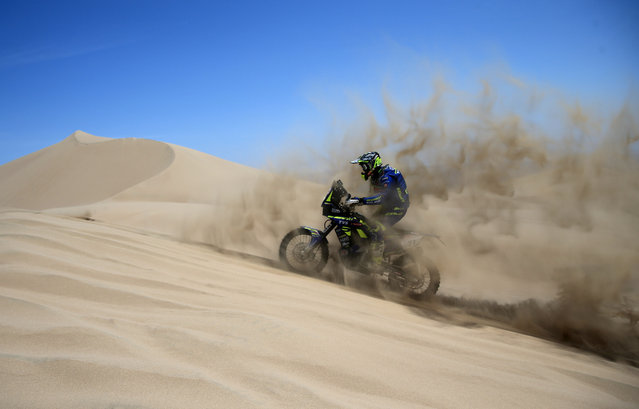 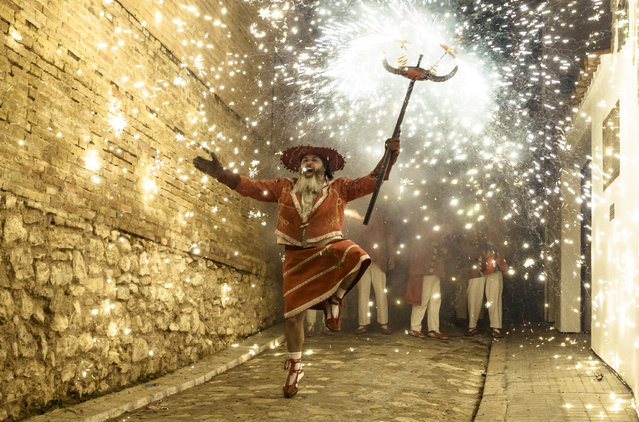 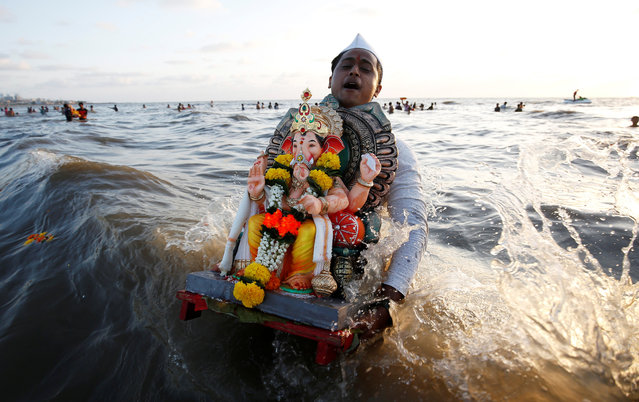 A devotee carries an idol of the Hindu god Ganesh, the deity of prosperity, to immerse into the Arabian Sea on the fifth day of Ganesh Chaturthi festival in Mumbai, India, September 17, 2018. (Photo by Francis Mascarenhas/Reuters) 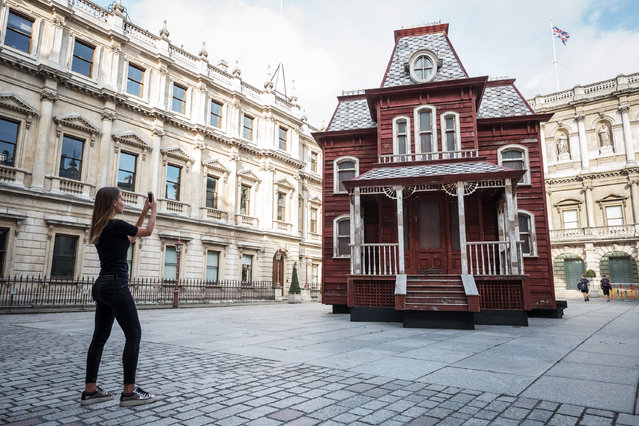 Cornelia Parker's Transitional Object “Psychobarn” at the Royal Academy of Артс ин London, UK on September 17, 2018. Standing at nearly 30 feet (10m), it is made from the components of a dismantled traditional American red barn and is based on the house seen in Alfred Hitchcock's film Psycho (1960), which in turn was modelled on a painting by the American painter Edward Hopper, House by the Railroad, 1925. (Photo by Guy Corbishley/Alamy Live News) 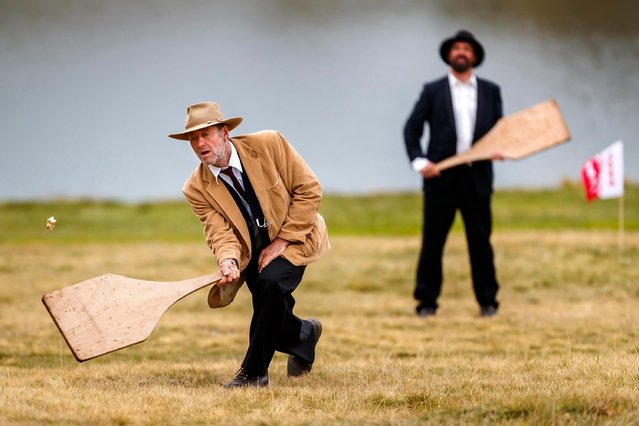 People play a game of “Gilihuesine” in the alpine resort of Bettmeralp Switzerland, 16, September 2018. The old traditional game of Gilihuesine, a mix between modern golf and baseball only practiced once a year in Bettmeralp, is played by striking a cow toe bone with a stick in a delimited area where an opposing team of six may cancel the point by intercepting the bone with a wooden board before the latter touches the ground. (Photo by Valentin Flauraud/EPA/EFE) 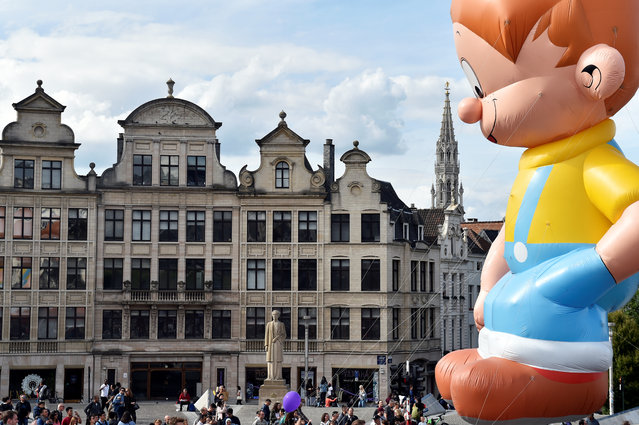 A giant balloon of Billy, character from a comic strip, floats during the Balloon Day Parade in Brussels, Belgium on September 17, 2018. (Photo by Eric Vidal/Reuters) 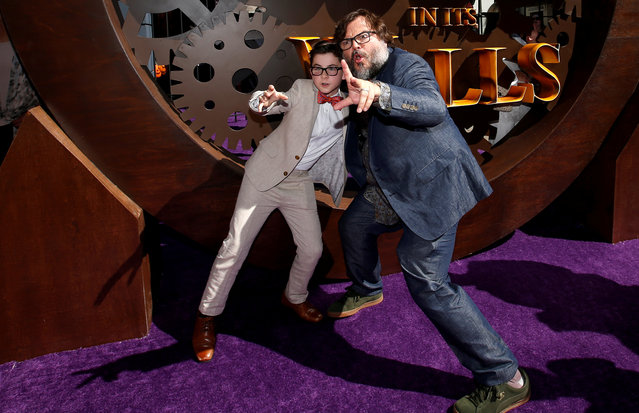 Actors Jack Black and Owen Vaccaro pose at the premiere for “The House With a Clock in its Walls” in Los Angeles, California, U.S., August 16, 2018. (Photo by Mario Anzuoni/Reuters) 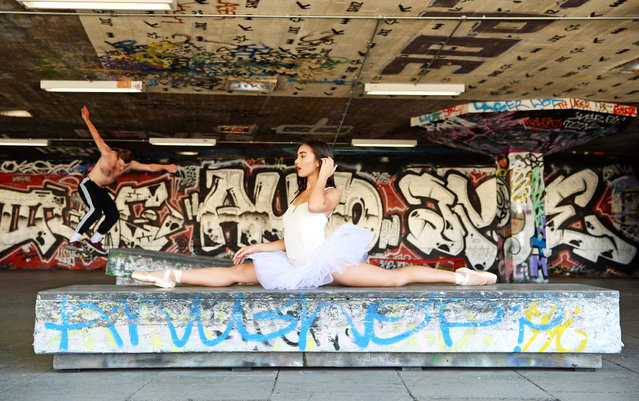 A ballet dancer practices in the sunshine at the Southbank skatepark in London on Monday, September 17, 2018, as Storm Helene is due to bring unseasonably warm weather in London and the south east, as the low pressure draws up warm air from the south. Forecasters have downgraded warnings that Helene could pose a risk to life when it hits this week – but warned coastal communities to stay vigilant. (Photo by Kirsty O'Connor/PA Wire) 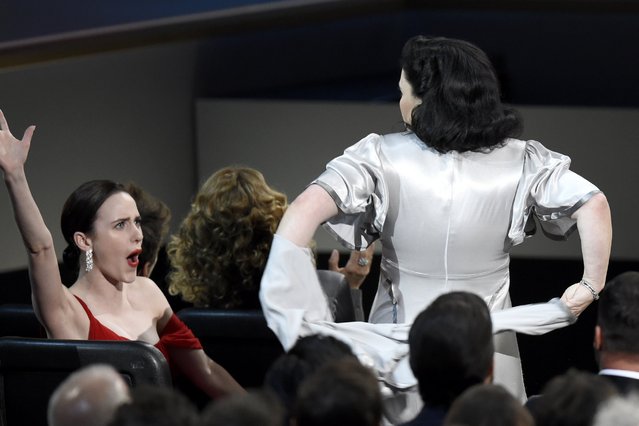 Alex Borstein takes off a top layer of her dress before appearing on stage to accept the award for outstanding supporting actress in a comedy series for “The Marvelous Mrs. Maisel” at the 70th Primetime Emmy Awards on Monday, September 17, 2018, at the Microsoft Theater in Los Angeles. Cheering on at left is Rachel Brosnahan. (Photo by Chris Pizzello/Invision/AP Photo)
Edit Del
18 Sep 2018 08:32:00, post received 0 comments
Publication archive:
←   →
Popular tags:
All tags
Last searches: