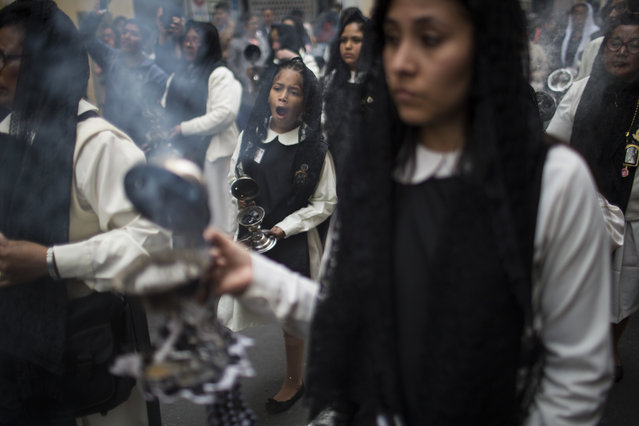 In this August 30, 2017 photo, a girl yawns during a procession celebrating the feast day of Santa Rosa de Lima, Peru's patron saint, in downtown Lima, Peru. Santa Rosa de Lima was the first person born in the Americas to be canonized by the Catholic church. She is also the co-patroness of the Philippines, but remains the primary patroness of Peru and Latin America's indigenous. (Photo by Rodrigo Abd/AP Photo) 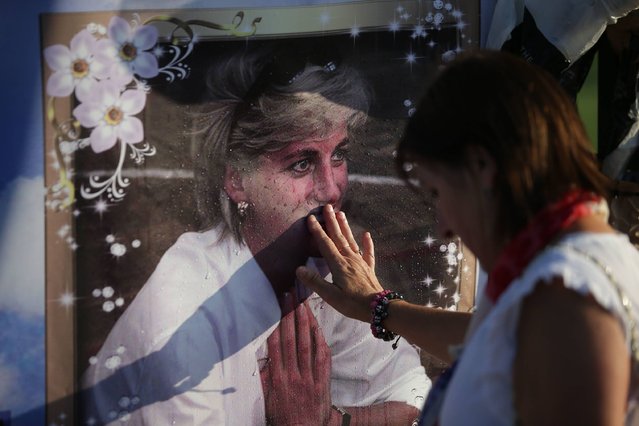 A royal fan pauses touching a photograph among the floral tributes, candles and photographs outside one of the gates of Kensington Palace in London on August 31, 2017, to mark the 20th anniversary of the death of Diana, Princess of Wales. Tributes of photographs, candels and photographs have gathered at the gates of Kensington Palace left by well-wishers and fans of Diana, princess of Wales to mark the 20th anniversary of her death on August 31, 2017. The Princess of Wales died in a fatal car crash in Paris on August 31, 1997. Well-wishers and fans of Diana visited the palace in the early hours of the morning on August 31 to pay their respects with a vigil at the famous gates of Diana's former residence. (Photo by Daniel Leal-Olivas/AFP Photo) 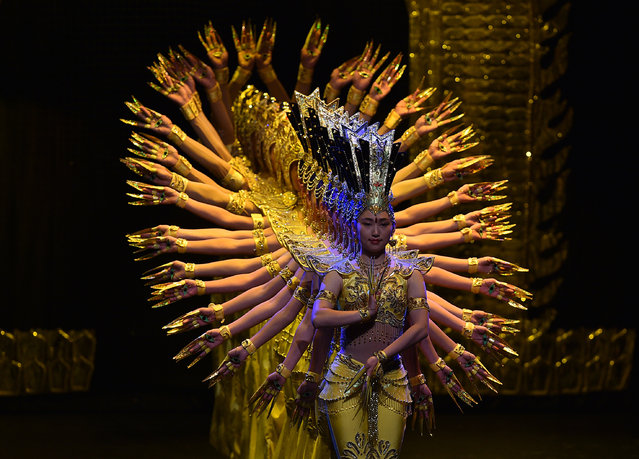 Members of the China Disabled Peoples Performing Art Troupe perform “My Dream” at Jorge Eliecer Gaitan Theater in Bogota on August 30, 2017. China Disabled People's Performing Art Troupe Company composed of artists with some hearing, mental, motor, visual or speech disabilities, was founded in 1987 and is currently Honorary and Goodwill Ambassadors of Unesco for its great example of inclusion. (Photo by John Vizcaino/AFP Photo) 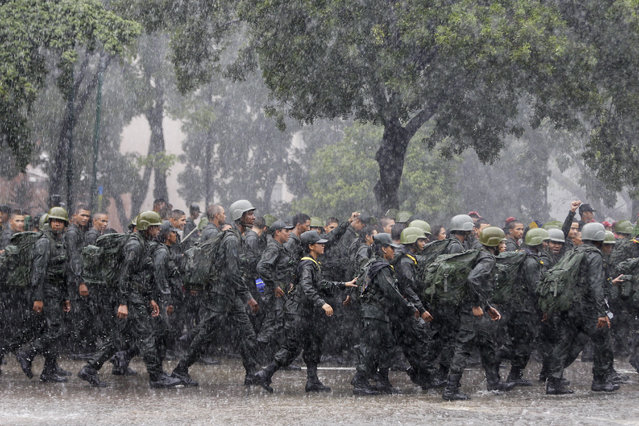 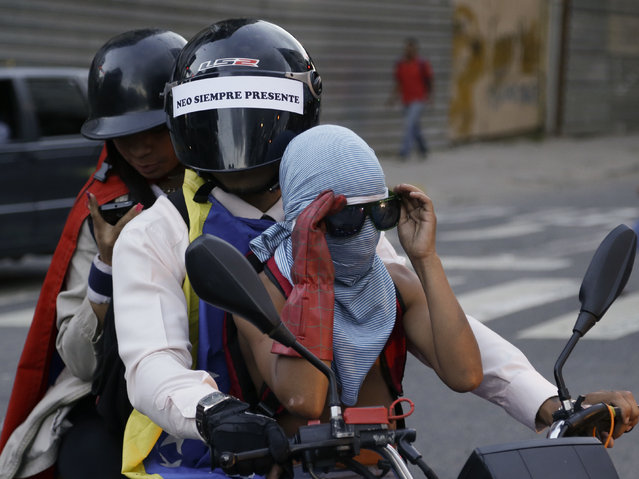 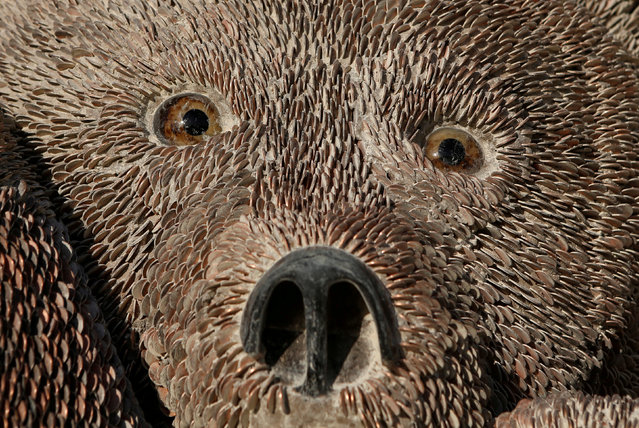 Over 200,000 American and Canadian pennies make up the art installation Ursa Mater as approximately 70,000 people from all over the world gathered for the annual Burning Man arts and music festival in the Black Rock Desert of Nevada, U.S. August 30, 2017. (Photo by Jim Urquhart/Reuters) 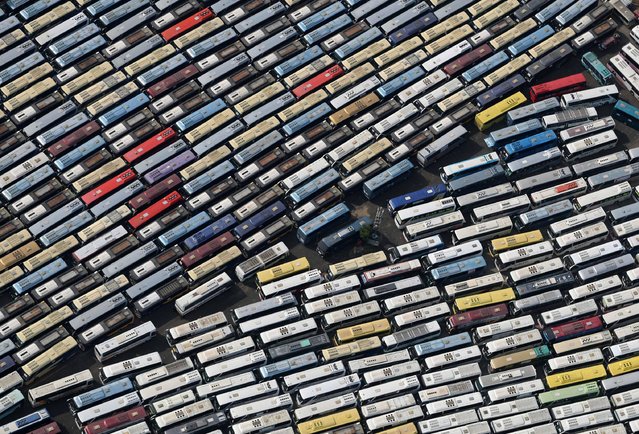 An aerial view shows buses parked after dropping Muslim pilgrims off near Mount Arafat, also known as Jabal al-Rahma (Mount of Mercy), southeast of the Saudi holy city of Mecca, on Arafat Day which is the climax of the Hajj pilgrimage on August 31, 2017. Arafat is the site where Muslims believe the Prophet Mohammed gave his last sermon about 14 centuries ago after leading his followers on the pilgrimage. (Photo by Karim Sahib/AFP Photo) 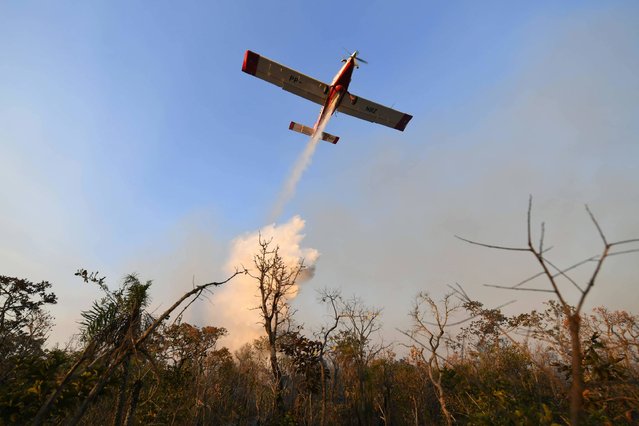 A firefighter plane helps in the effort to put out a forest fire in the northern area of Brasilia's National Park (PNB), in Brasilia on August 30, 2017. The PNB extends through 42,000 hectares amid Brasilia's urban area, where no rain has fallen in 100 days and the relative air humidity reaches 10%. (Photo by Evaristo Sa/AFP Photo) 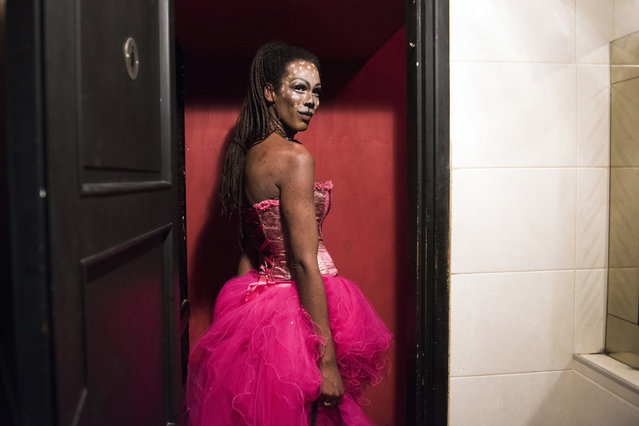 In this August 25, 2017 photo, a reveler leaves the women's bathroom during Nostalgia Night parties in Montevideo, Uruguay. Although the original Nostalgia Night party took place in one venue when it started in 1978, many others took notice an now the party takes place all over the country. (Photo by Matilde Campodonico/AP Photo) 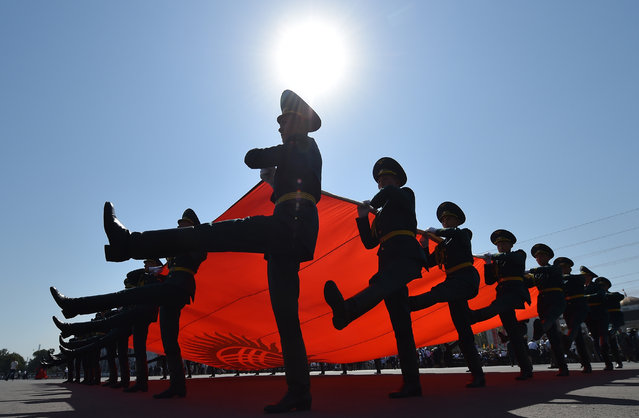 Kyrgyz honour guards carry their national flag as they parade during celebrations marking the 26th anniversary of Kyrgyzstan's independence from the Soviet Union at the Ala-Too Square in Bishkek on August 31, 2017. (Photo by Vyacheslav Oseledko/AFP Photo) 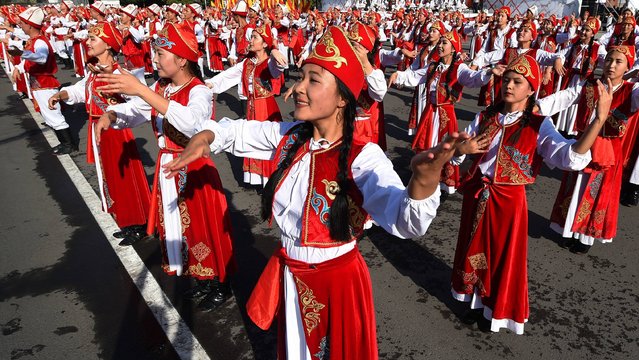 Kyrgyz dancers in traditional costumes perform during celebrations marking the 26th anniversary of Kyrgyzstan's independence from the Soviet Union at the Ala-Too Square in Bishkek on August 31, 2017. (Photo by Vyacheslav Oseledko/AFP Photo) 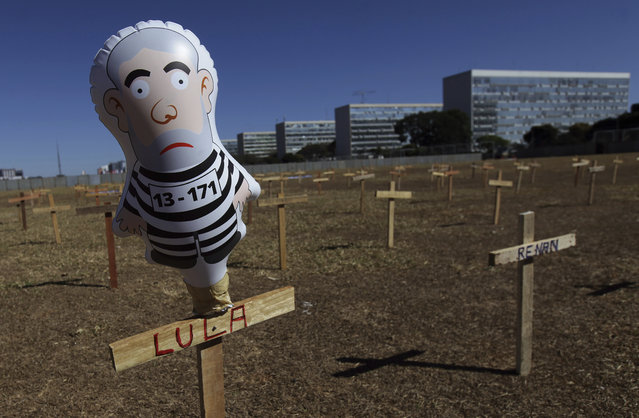 In this August 27, 2017 photo, a doll representing Brazil's President Luiz Inacio Lula da Silva wearing prison clothes stands on a cross with his name in Brasilia, Brazil. Demonstrators placed crosses representing the death of corrupt politicians. In July, Lula was found guilty of corruption and money laundering and sentenced to almost 10 years in prison. Now his case goes before a group of magistrates. (Photo by Eraldo Peres/AP Photo) 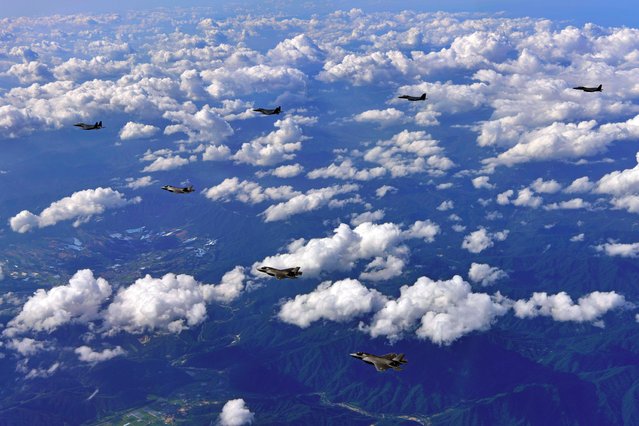 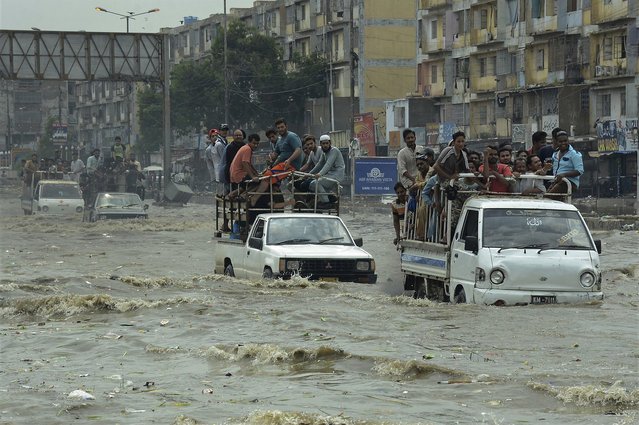 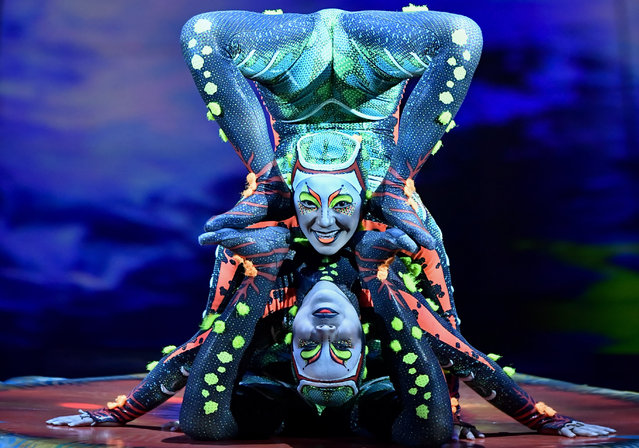 Artists perform during a dress rehearsal of “Totem”, the upcoming show of the “Cirque du Soleil” circus theater company, on August 30, 2017 in Brussels, Belgium. (Photo by Dirk Waem/AFP Photo/Belga) 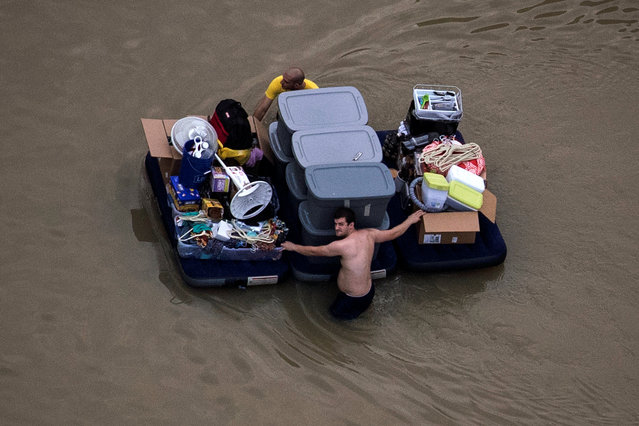 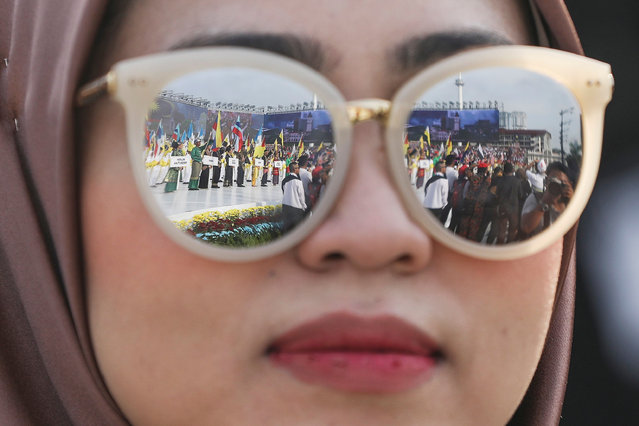 School children performing are reflected in the sunglasses of a woman during Independence Day celebrations in Kuala Lumpur, Malaysia, 31 August 2017. Malaysia, which gained its independence from British colonial rule in 1957, celebrates its 60th Independence Day, officially known as Hari Merdeka, on 31 August. (Photo by Fazry Ismail/EPA/EFE) 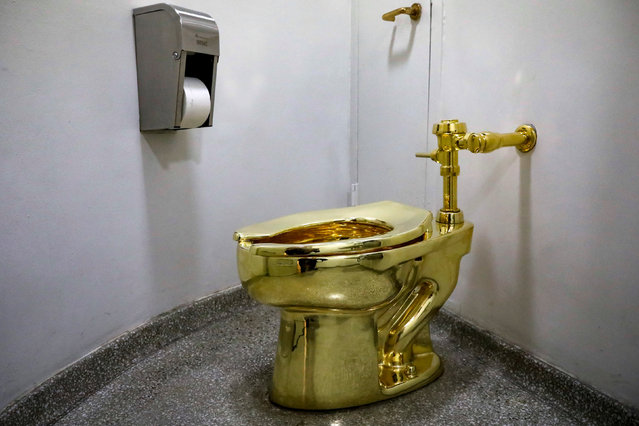