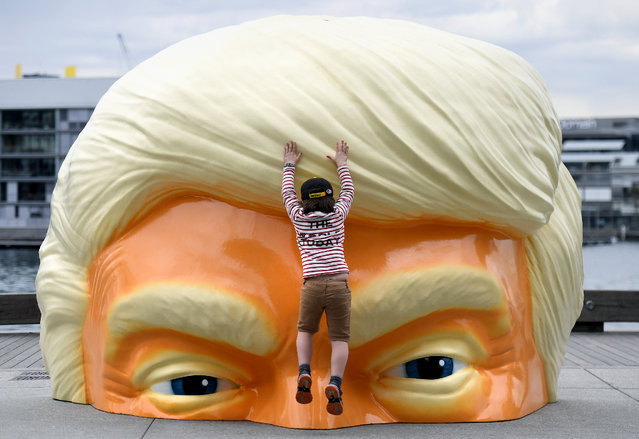 Stanley Coverdale aged 6 jumps up to “Helter Shelter” on August 31, 2018 in Sydney, Australia. Contemporary visual artist Callum Morton has created a site specific work at Barangaroo as part of an activation by Sydney Contemporary Art Fair in the lead up to its annual showing at Carriageworks between September 13 and 16, 2018. The exhibit which is a piece of temporary architecture portrays the image of Donald Trump, the current United States of America President and is meant to provide a place to rest and be protected as the back half of the head is an area to sit and contemplate. (Photo by James D. Morgan/Getty Images) 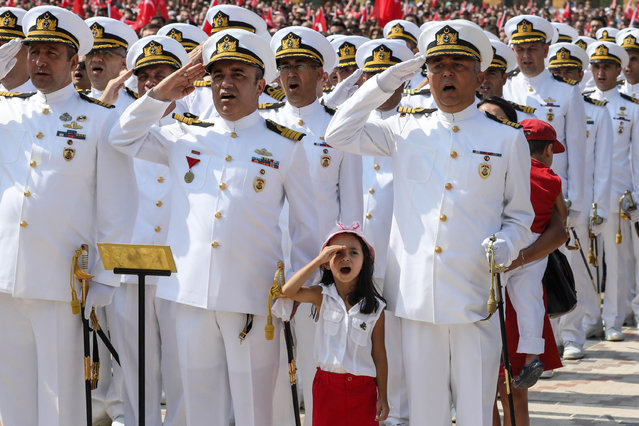 A girl sings with Turkish soldiers during a ceremony marking the 96 th anniversary of Victory Day, commemorating a decisive battle in the Turkish War of Independence, at the Mausoleum of Mustafa Kemal Ataturk, founder of modern Turkey, in Ankara, on August 30, 2018. (Photo by Adem Altan/AFP Photo) 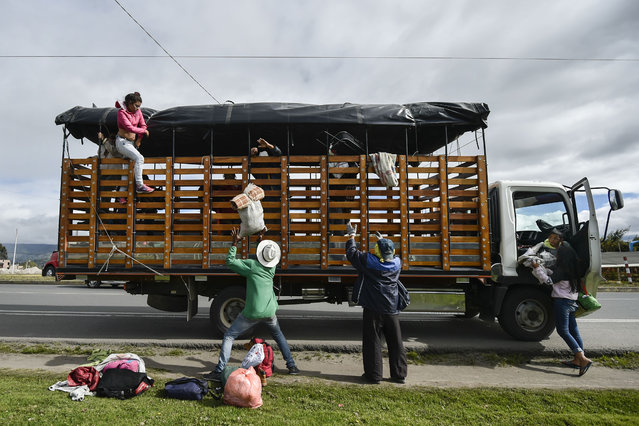 Members of Venezuelan migrant families Mendoza Landinez and Lomelly get off a truck on the Pan- American highway, between Pasto and Ipiales in Colombia, on their way to Peru, on August 23, 2018. On foot, by bus, on the backs of juddering trucks, like tens of thousands of others they slogged for days along the Pan- American highway through Colombia and Ecuador. Grubby and sleepless, their goal was to reach Peru, a sanctuary of sorts for a desperate Venezuelan family. (Photo by Luis Robayo/AFP Photo) 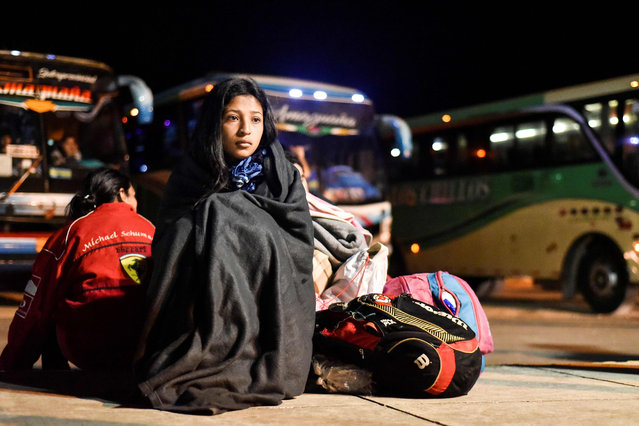 Nacari, 16, awaits in Huaquillas, Ecuador, border with Peru, after travelling across the country in a bus provided by Ecuadoran authorities as part of a “humanitarian corridor” for Venezuelans fleeing their country' s economic crisis on August 25, 2018. (Photo by Luis Robayo/AFP Photo) 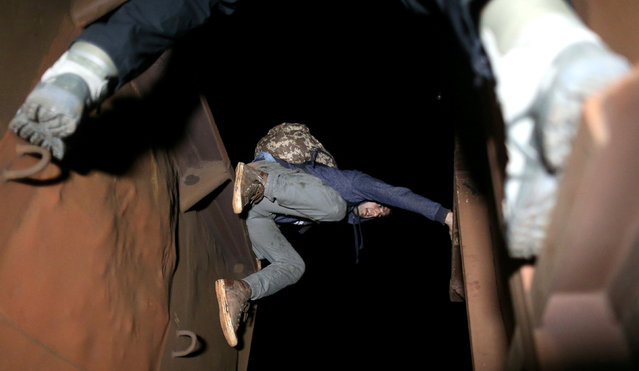 Migrants jump off a freight train while trying to cross the Bosnian border from Serbia, near Zvornik, Bosnia and Herzegovina on September 1, 2018. (Photo by Dado Ruvic/Reuters) 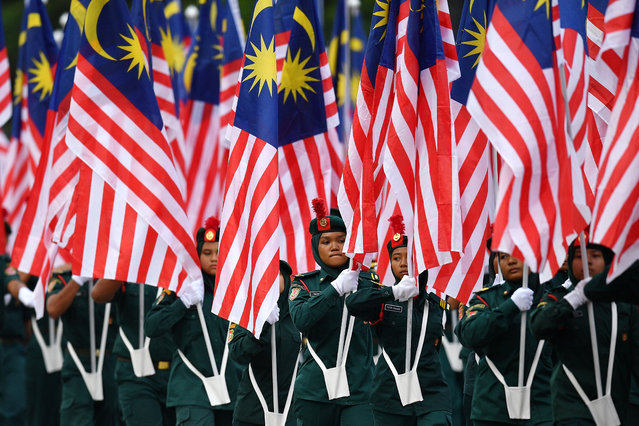 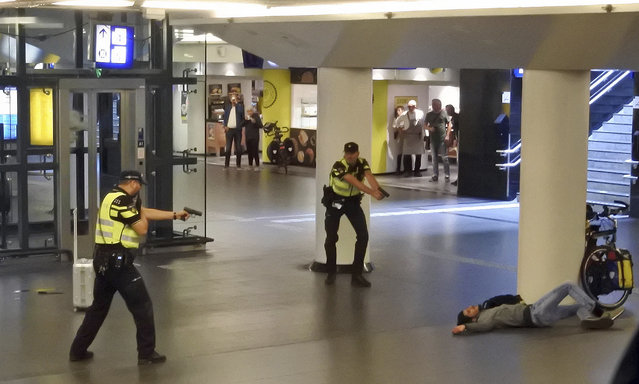 Dutch police officers point their guns at a wounded 19-year-old man who was shot by police after stabbing two people in the central railway station in Amsterdam, the Netherlands, Friday August 31, 2018. Police investigators in Amsterdam included an extremist attack as a possible motive for the stabbings of two people at a busy railway station Friday as authorities in the Dutch capital reported that the suspect shot by police is an Afghan citizen. (Photo by AP Photo/Stringer) 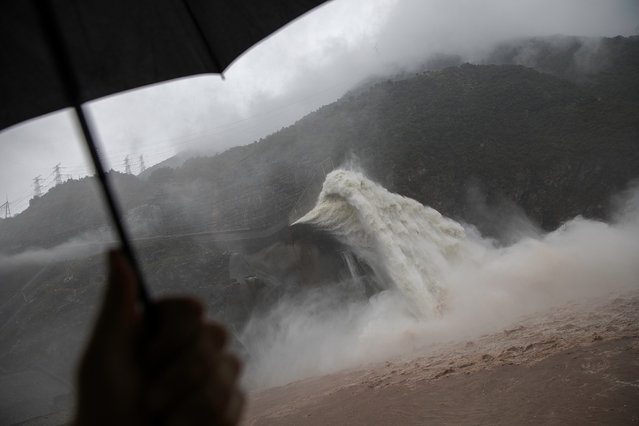 Water is released as heavy rain falls at a massive Pubugou Dam on the Dadu river, a tributary of the Yangtze River in Hanyuan County of Sichuan province, China on August 30, 2018. (Photo by Damir Sagolj/Reuters) 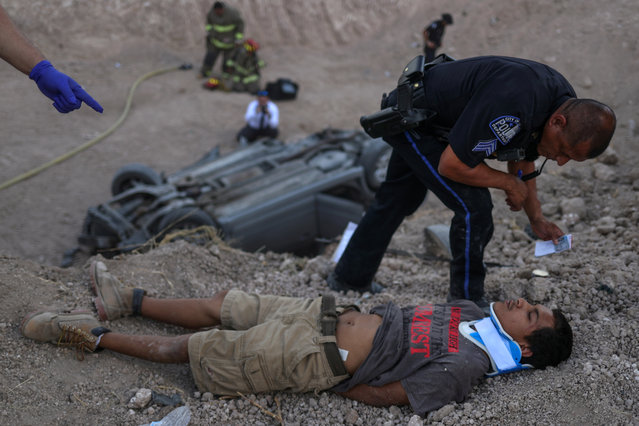 A policeman from the city of La Joya stands over an 18-year-old male who lies injured after crashing his vehicle while transporting two men and a woman who illegally crossed the U.S. border from Mexico in Penitas, Texas on August 31, 2018. (Photo by Adrees Latif/Reuters) 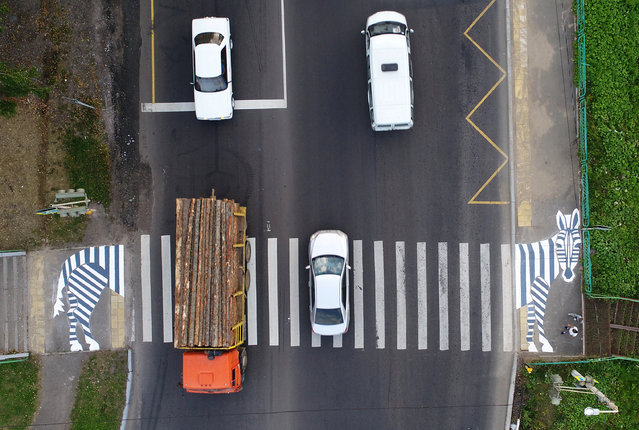 People wait at a zebra-painted pedestrian crossing as vehicles drive along the R257 Yenisei federal highway in the suburb of Krasnoyarsk, Russia on August 30, 2018. (Photo by Ilya Naymushin/Reuters) 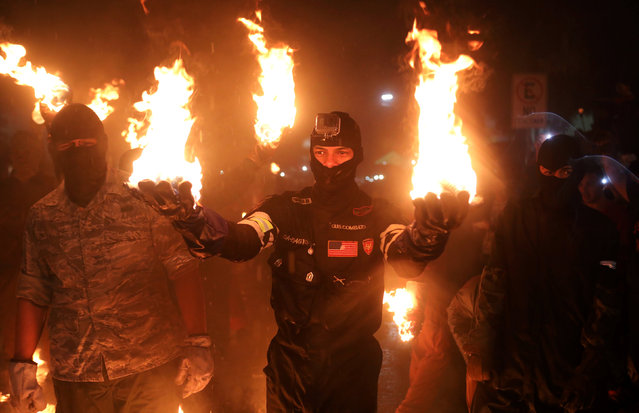 A man participates in “Bolas de Fuego” (Balls of Fire) festival in Nejapa, El Salvador August 31, 2018. Revellers participate in “La Recuerda” to remember the fight of Saint Geronimo against the devil with balls of fire. (Photo by Jose Cabezas/Reuters) 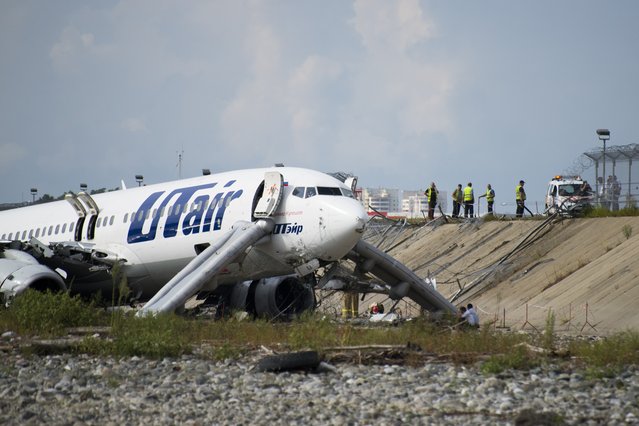 A view of the Utair-operated Boeing 737-800 which skidded off the runway and caught fire during landing, at Sochi international airport, of the Russian Black Sea resort of Sochi, Russia, Saturday, September 1, 2018. Russia's transportation minister says a supervisor at the airport in Sochi died during the emergency response after a landing airliner careered off the end of the runway, into a riverbed and caught fire. There were no deaths reported among the 164 passengers and six crew members aboard the Utair Boeing 737, but the Russian health ministry said 18 people were injured. The fire was extinguished within eight minutes, the airport said. (Photo by AP Photo/Stringer) 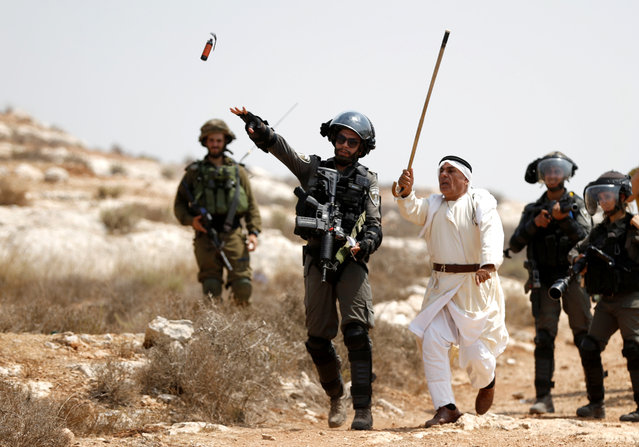 A Palestinian demonstrator gestures as an Israeli border police officer throws a sound grenade during a protest against Israeli settlement construction, in the village of Ras Karkar, near Ramallah in the occupied West Bank, August 31, 2018. (Photo by Mohamad Torokman/Reuters) 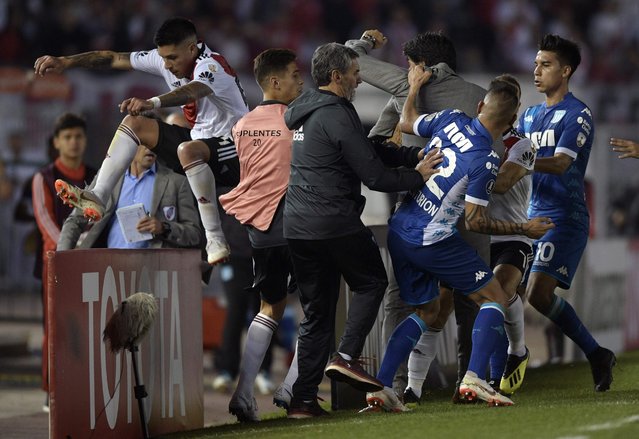 Argentina's Racing Club forward Ricardo Centurion (22) fights with Argentina's River Plate midfielder Enzo Perez (L) before being sent off by Paraguayan referee Mario Diaz (not in frame) during their Copa Libertadores 2018 round of sixteen second leg football match at the Monumental stadium in Buenos Aires, Argentina, on August 29, 2018. (Photo by Juan Mabromata/AFP Photo) 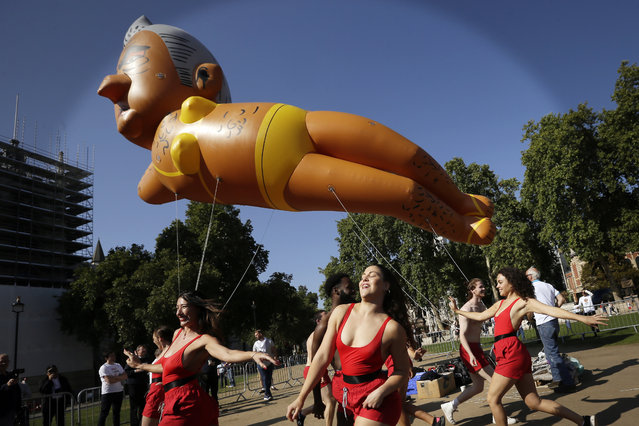 Dancers perform under an inflatable caricature balloon of Mayor of London, Sadiq Khan as it flies over Parliament Square in London, Saturday, September 1, 2018. Organizer Yanny Bruere raised more than 58,000 pounds ($75,000) through the Crowdfunder website for the 29-foot (8.8-meter) blimp as part of a campaign to oust Khan from his post. Khan angered some people in the British capital and elsewhere last month when he allowed a balloon caricaturing Donald Trump as an angry baby to float above the city while the U.S. president was in England. (Photo by Tim Ireland/AP Photo) 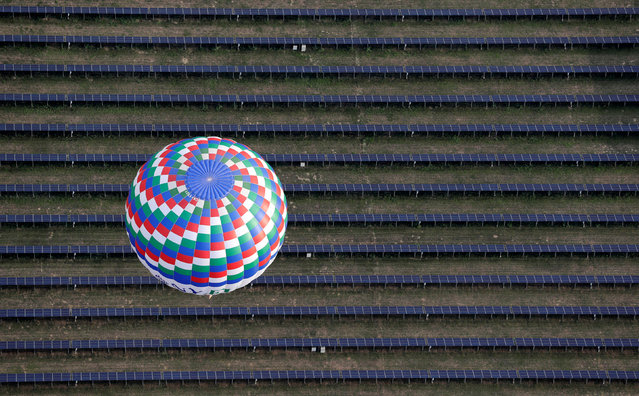 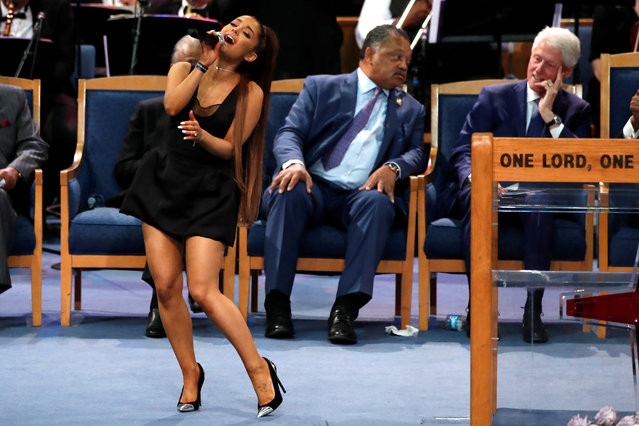 Singer Ariana Grande performs during the funeral service for Aretha Franklin at Greater Grace Temple, Friday, August 31, 2018, in Detroit. Franklin died August 16, 2018 of pancreatic cancer at the age of 76. (Photo by Mike Segar/Reuters) 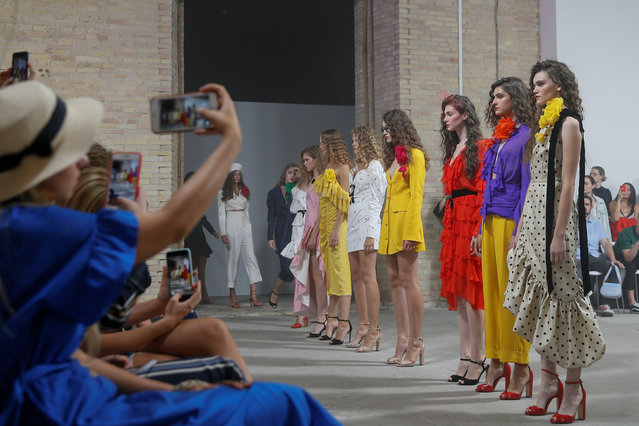 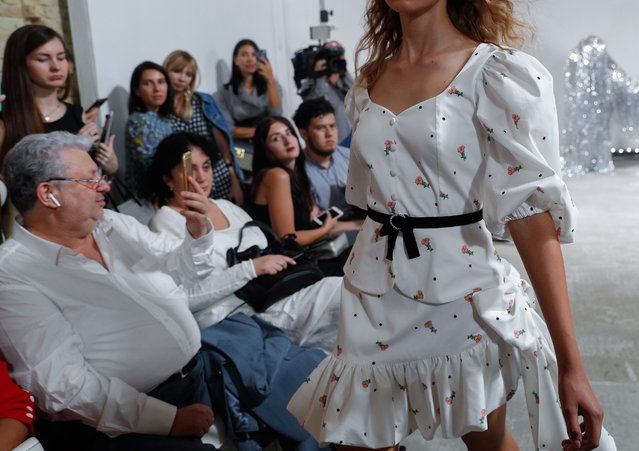 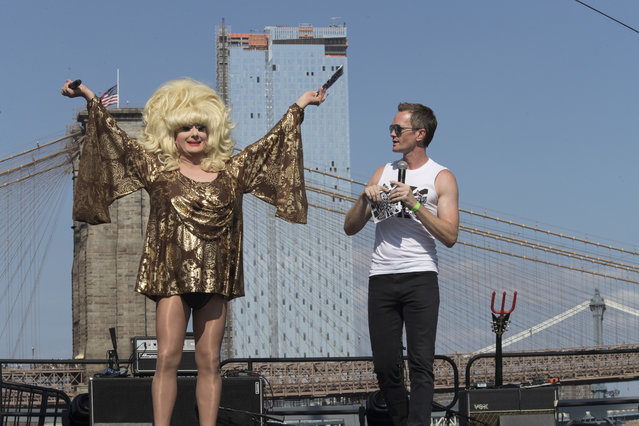 Neil Patrick Harris, right, appears on stage along Lady Bunny during Wigstock, Saturday, September 1, 2018, in New York. The 1980s festival, an impromptu creation of unruly patrons in drag who stumbled out of an East Village club at about 2 a.m. to improvise for homeless people in garbage-strewn, rat-infested Tompkins Square Park, was revived at New York City's Pier 17. (Photo by Mary Altaffer/AP Photo) 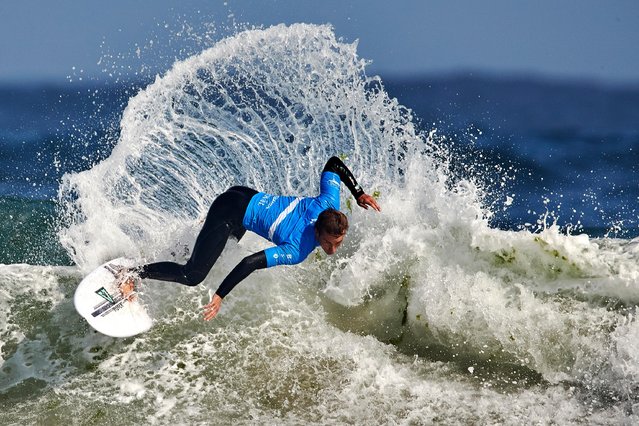