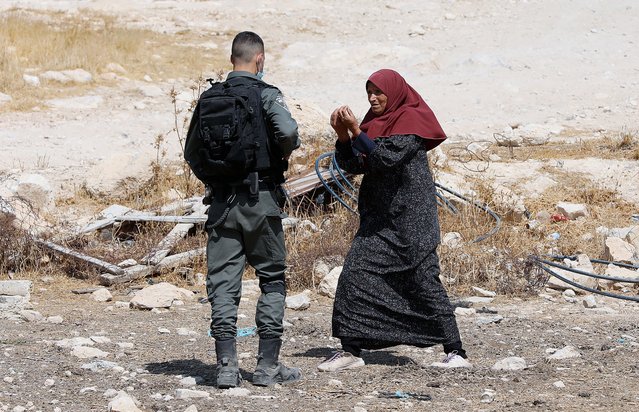 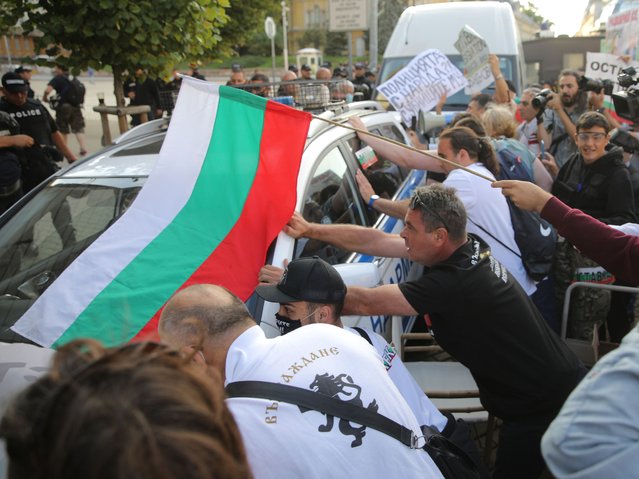 People take part in an anti-government demonstration in Sofia, Bulgaria, September 2, 2020. In the biggest protest so far in nearly two months of anti-government rallies, hundreds of police officers in riot gear on Wednesday cordoned off the parliament building trying to protect it from protesters who were throwing stones and plastic bottles, eggs and garbage. Police answered by firing pepper spray at them. (Photo by Stoyan Nenov/Reuters) 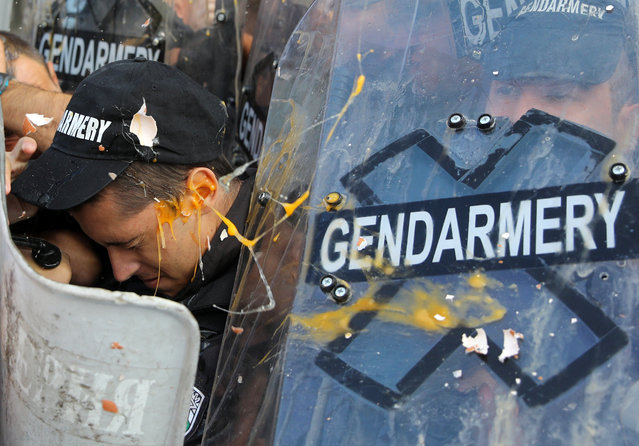 A police officer is hit by an egg during a scuffle with protesters during an anti-government demonstration in Sofia, Bulgaria, September 2, 2020. (Photo by Stoyan Nenov/Reuters) 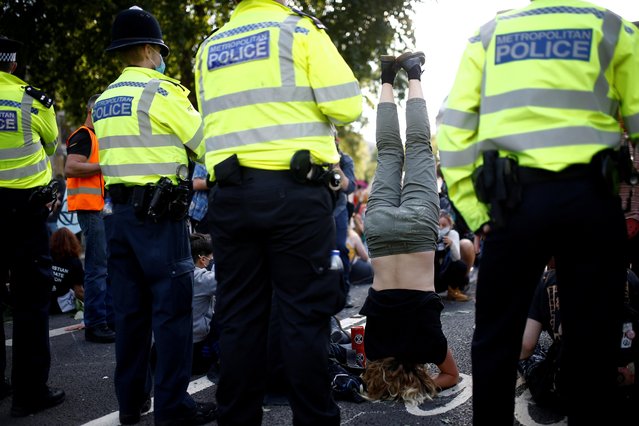 An Extinction Rebellion climate activist stands on their head during a “peaceful disruption” of British Parliament as lawmakers return from the summer recess, in London, Britain on September 1, 2020. (Photo by Henry Nicholls/Reuters) 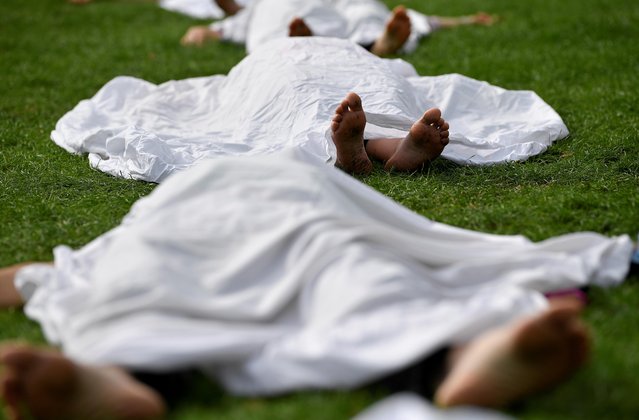 Extinction Rebellion activists participate in a “peaceful disruption” of the British Parliament as lawmakers return from summer recess, in London, Britain September 2, 2020. (Photo by Toby Melville/Reuters) 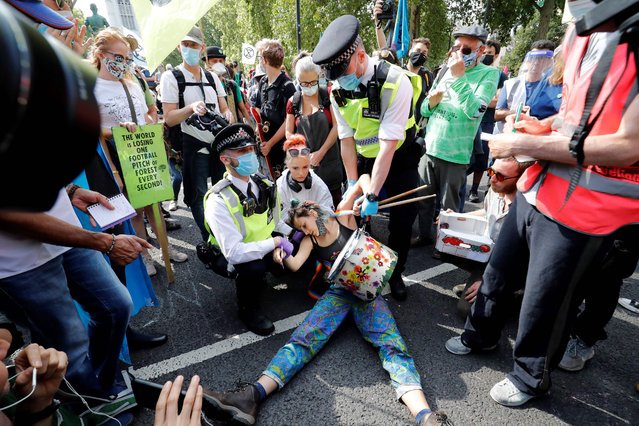 Police officers wearing face masks and gloves due to the COVID-19 pandemic, detain an activist from the climate protest group Extinction Rebellion as they demonstrate in Parliament Square in London on September 2, 2020, on the second day of their new season of “mass rebellions”. Climate protest group Extinction Rebellion will target Britain's parliament as part of “mass rebellions” starting from September 1. Other actions will take place around the country. (Photo by Tolga Akmen/AFP Photo) 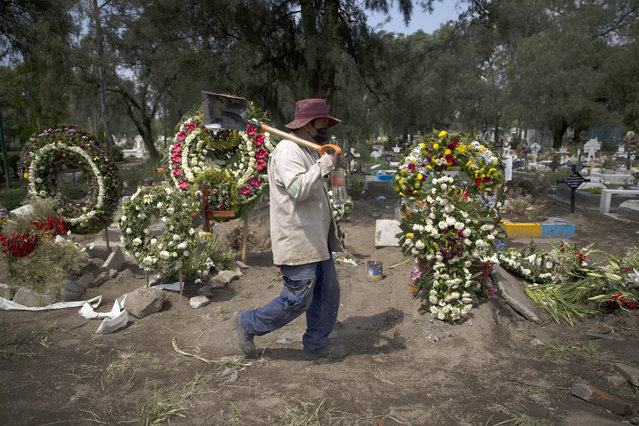 A grave digger walks in the COVID-19 section of the cemetery of San Lorenzo Tezonco Iztapalapa on the outskirts of Mexico City, Tuesday, September 1, 2020. (Photo by Marco Ugarte/AP Photo) 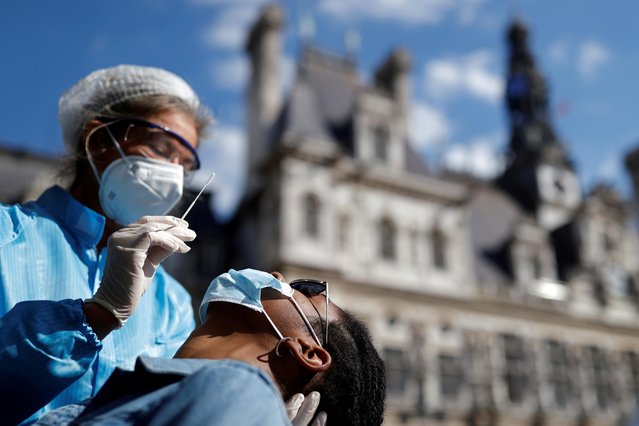 A health worker, wearing a protective suit and a face mask, prepares to administer a nasal swab to a patient at a testing site for the coronavirus disease (COVID-19) installed in front of the city hall in Paris, France, September 2, 2020. (Photo by Christian Hartmann/Reuters) 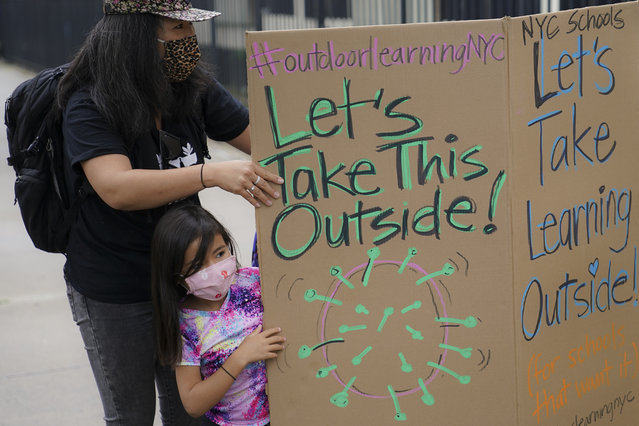 Teachers and students arrive to participate in an outdoor learning demonstration to display methods schools can use to continue on-site education during the coronavirus pandemic, Wednesday, September 2, 2020, at P.S. 15 in the Brooklyn borough of New York. (Photo by John Minchillo/AP Photo) 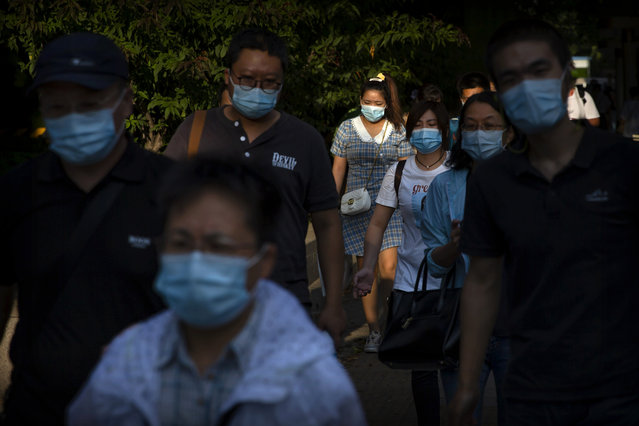 People wearing face masks to protect against the coronavirus walk along a street in the central business district in Beijing, Wednesday, September 2, 2020. Even as China has largely controlled the outbreak, the coronavirus is still surging across parts of the world. (Photo by Mark Schiefelbein/AP Photo) 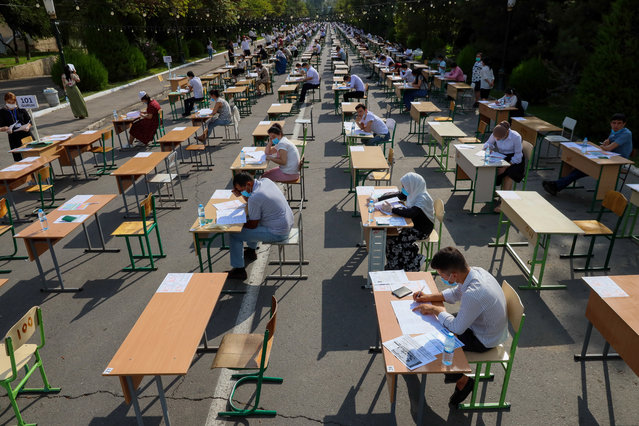 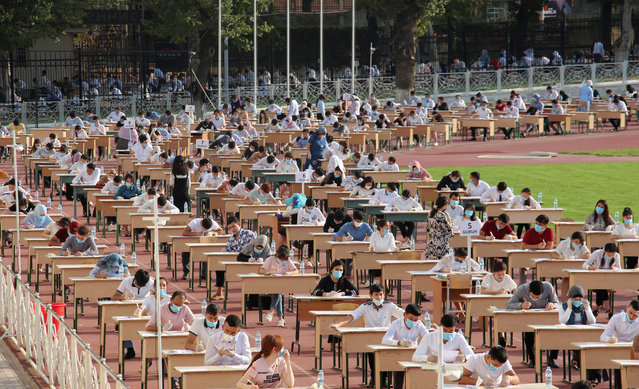 School graduates take university entrance exams at the Pakhtakor sports arena amid the outbreak of the coronavirus disease (COVID-19) in Tashkent, Uzbekistan on September 2, 2020. (Photo by Mukhammadsharif Mamatkulov/Reuters) 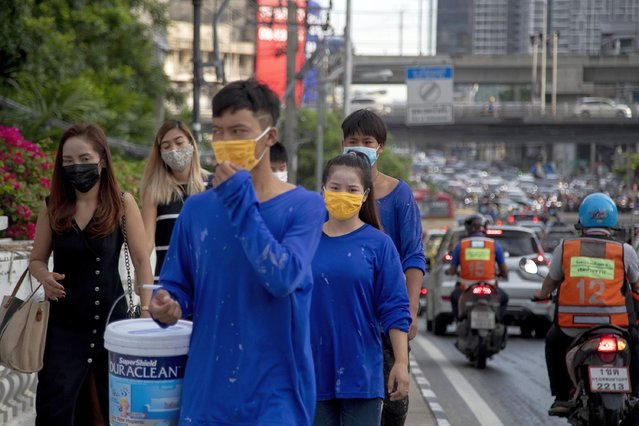 Office workers and construction workers with face masks walk in a side walk in Bangkok, Thailand, Thursday, September 3, 2020. Thailand's prime minister on Wednesday congratulated his countrymen on the nation having achieved 100 days without a new confirmed locally transmitted case of the coronavirus, even as security along the border with Myanmar is being stepped up as a measure against the disease. (Photo by Gemunu Amarasinghe/AP Photo) 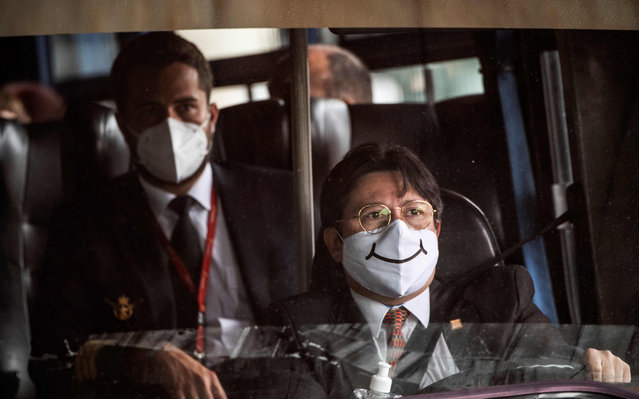 A bus driver wears face mask in Bogota on September 1, 2020, during te coronavirus pandemic. Bogota, the focus of the pandemic in Colombia, left behind its strict quarantine by zones and began to ease restrictive measures against the new coronavirus, mainly aimed at relaunching the declining trade in the capital. (Photo by Juan Barreto/AFP Photo) 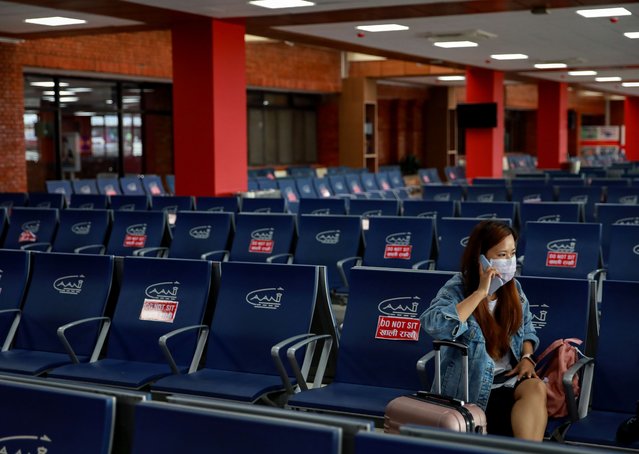 A passenger waits to board her flight at Tribhuvan International Airport, which reopened for limited international flights, in Kathmandu, Nepal, on September 2, 2020. Nepal's government reopened the airport, allowing a limited number of chartered and scheduled passenger flights. (Photo by Navesh Chitrakar/Reuters) 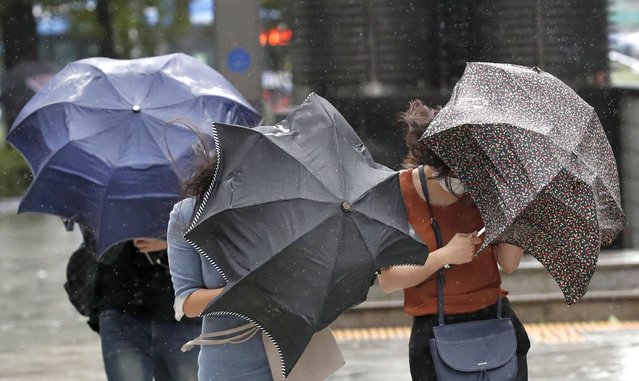 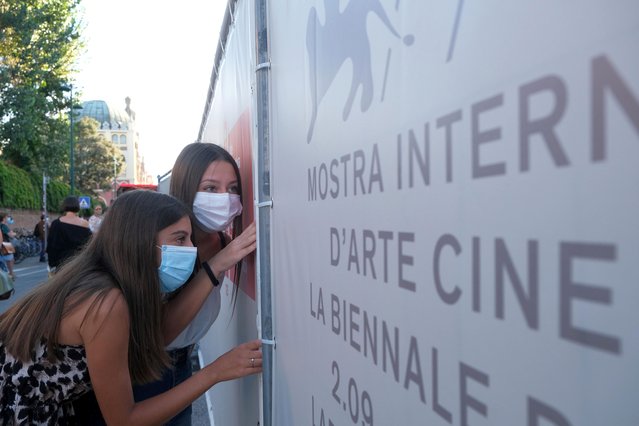 Fans look through a gap to spot famous people on the red carpet during the gala ceremony of the 77th Venice International Film Festival in Italy, September 2, 2020. (Photo by Manuel Silvestri/Reuters) 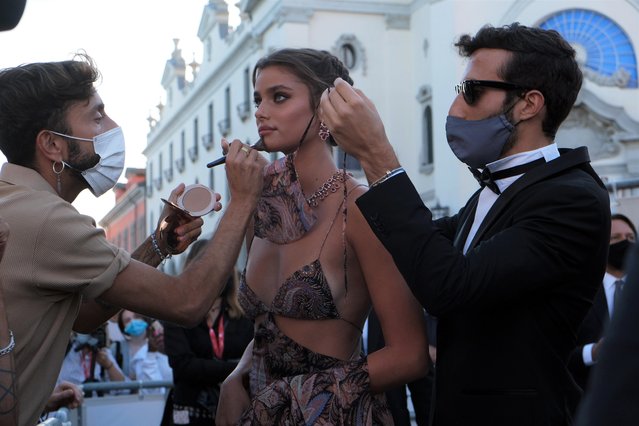 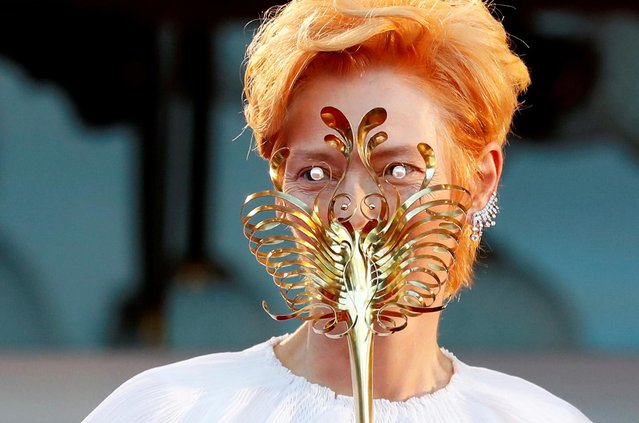 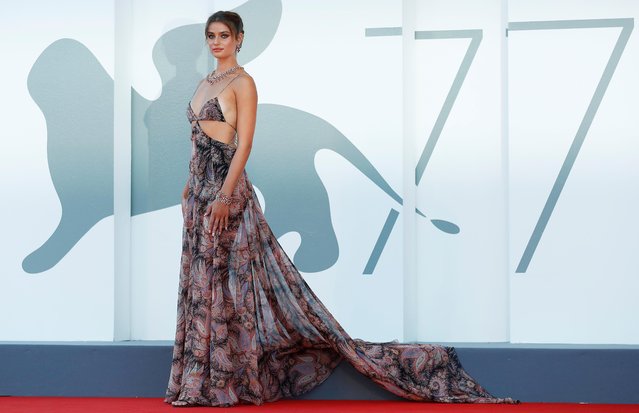