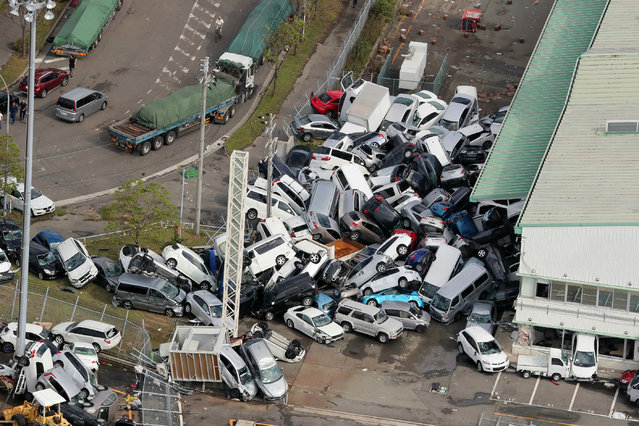 An aerial view from a Jiji Press helicopter shows vehicles piled in a heap due to strong winds in Kobe, Hyogo prefecture on September 5, 2018, after typhoon Jebi hit the west coast of Japan. The toll in the most powerful typhoon to hit Japan in a quarter century rose on September 5 to nine, with thousands stranded at a major airport because of storm damage. (Photo by AFP Photo/JIJI Press) 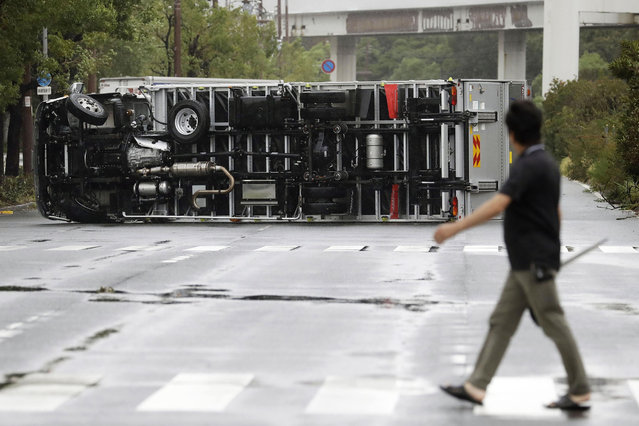 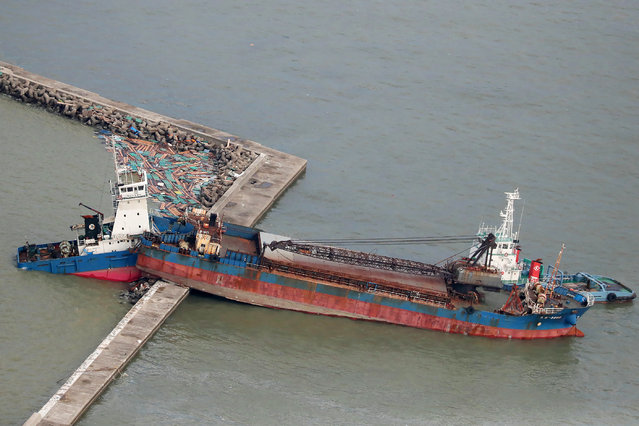 An aerial view from a Jiji Press helicopter shows a ship that collided with a breakwater due to strong winds caused by typhoon Jebi in Nishinomiya city, Hyogo prefecture on September 5, 2018. The toll in the most powerful typhoon to hit Japan in a quarter century rose on September 5 to nine, with thousands stranded at a major airport because of storm damage. (Photo by AFP Photo/JIJI Press) 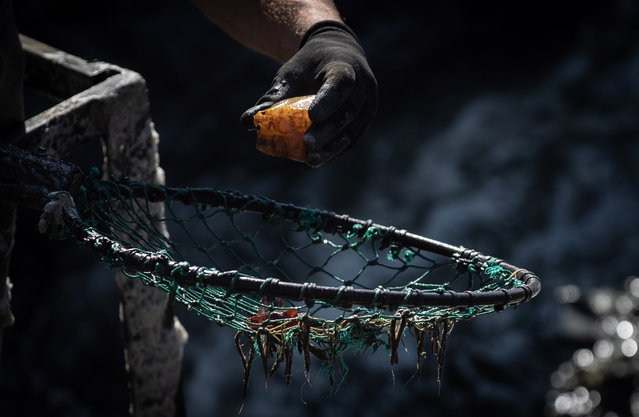 Mining amber at the Kaliningrad Amber Combine based on the world's largest amber deposit in the village of Yantarny, Kaliningrad Region, Russia on September 3, 2018. (Photo by Stanislav Krasilnikov/TASS) 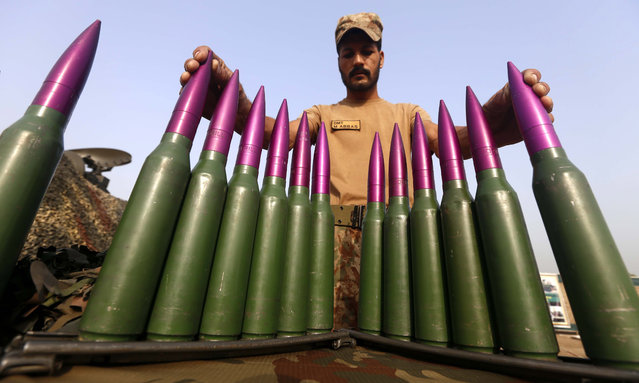 Pakistani army soldiers prepare a stall at a defence exhibition a day ahead of the Pakistan Defense day celebrations, in Peshawar, Pakistan, 05 September 2018. Pakistan observes Defense Day to pay homage to those killed in wars and highlight their sacrifices during the war of September 1965 with India. (Photo by Arshad Arbab/EPA/EFE) 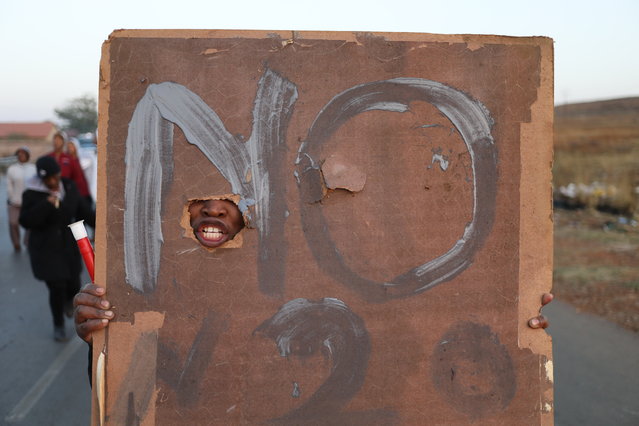 A member of the Lenasia community shouts through a hole in her poster during a protest against the recent land invaders who tried to settle on an open piece of land near their houses, in Johannesburg, South Africa, 05 September 2018. The area has seen thousands of illegal shacks being erected over the past months as both South African and foreign nationals moved to the city to live. The issues of land, and its redistribution, is an important topic in South Africa as the government looks at the option of handing land to previously disadvantaged communities without payment to the land owners. Houses in Lensasia south, where these invasions happened, have lost 40 percent value as residents tried to stop trespassers from taking more land. (Photo by Kim Ludbrook/EPA/EFE) 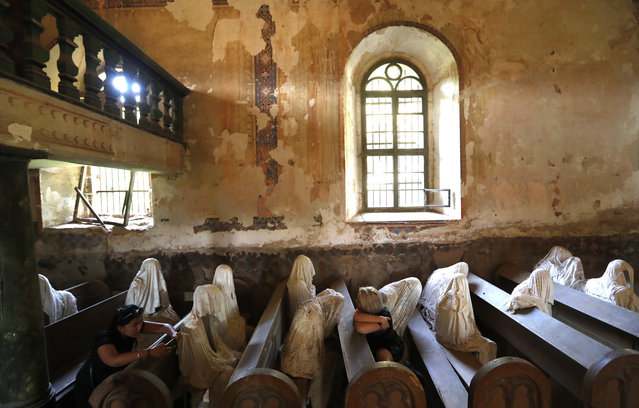 In this picture taken on Thursday, August 30, 2018, French tourists visit the church of Saint George in the village of Lukova, Czech Republic. In the year of 2012 the art student Jakub Hadrava filled the church's pews with ghostly figures, made from plaster casts of live models draped in white cloth. The effect is chilling. He called the work “My Mind”. (Photo by Petr David Josek/AP Photo) 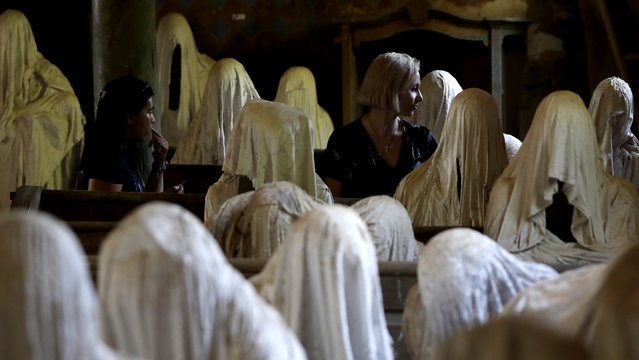 In this picture taken on Thursday, August 30, 2018, French tourists visit the church of Saint George in the village of Lukova, Czech Republic. (Photo by Petr David Josek/AP Photo) 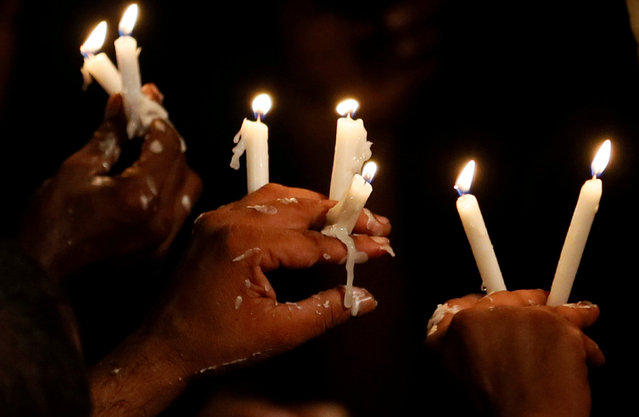 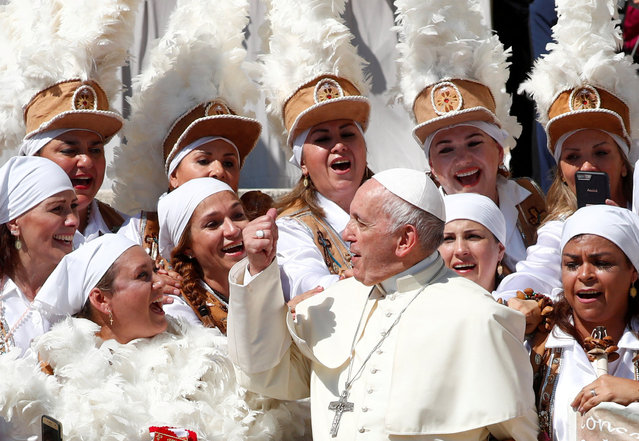 Pope Francis poses with a group of Mexican faithful during the Wednesday general audience in Saint Peter's square at the Vatican, September 5, 2018. (Photo by Max Rossi/Reuters) 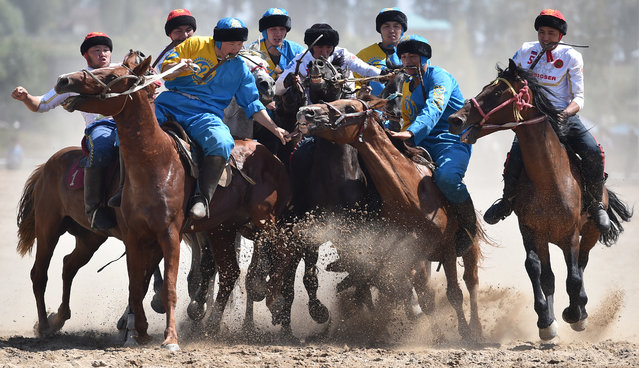 Russian (white) and Kazakh (blue) riders play the traditional Central Asian sport Buzkashi also known as Kok-Boru or Oglak Tartis during the World Nomad Games 2018 in Cholpon-Ata, eastern Kirghizstan, on September 5, 2018. Ex-Soviet Kyrgyzstan kicked off the “World Nomad Games” on September 3, 2018 which it has hosted biennally since 2014 with Turkey pledging to host the 2020 edition of the week-long traditional sport extravaganza. (Photo by Vyacheslav Oseledko/AFP Photo) 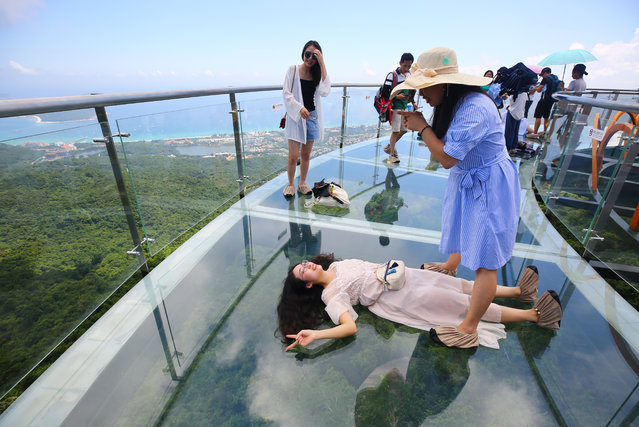 Tourists pose for photos on a sightseeing platform of a 400-meter-long glass-bottomed skyway at the Yalong Bay Tropical Paradise Forest Park in Sanya city, Hainan province, China on September 3, 2018. A 400-meter glass walkway in Yalong Bay Tropical Paradise Forest Park in Sanya, Hainan Province opened to the public at the end of August and became a popular tourist spot immediately. The park is located in the southeast of Sanya and surrounds the Yalong Bay National Tourist Resort, known as the most spectacular bay in the world because of its natural assets. (Photo by Imaginechina/Rex Features/Shutterstock) 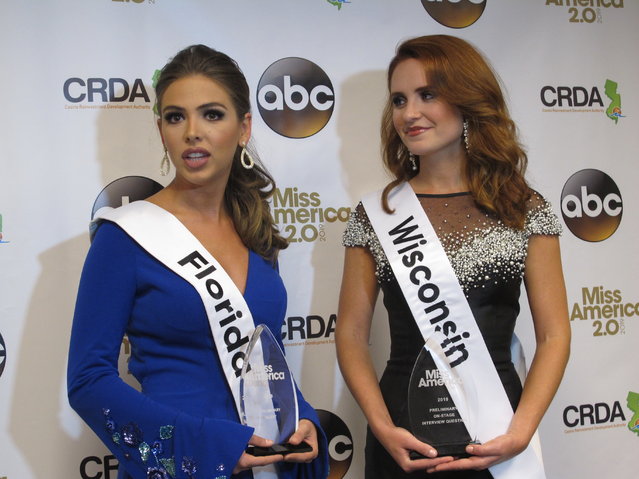 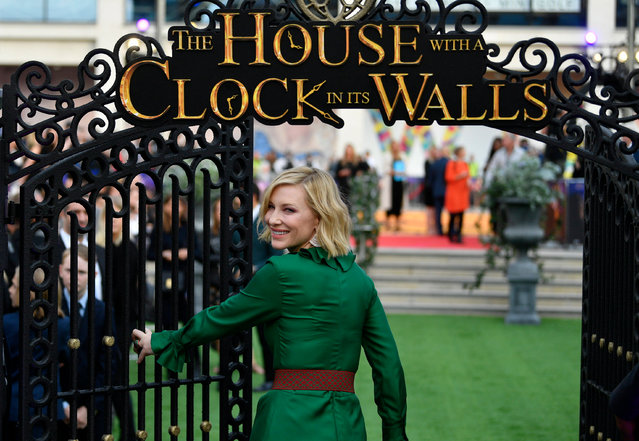 Australian actress/cast member Cate Blanchett attends the world premiere of the film “The House with a Clock in Its Walls” in London, Britain, 05 September 2018. The movie opens in British theaters on 21 September. (Photo by Neil Hall/EPA/EFE) 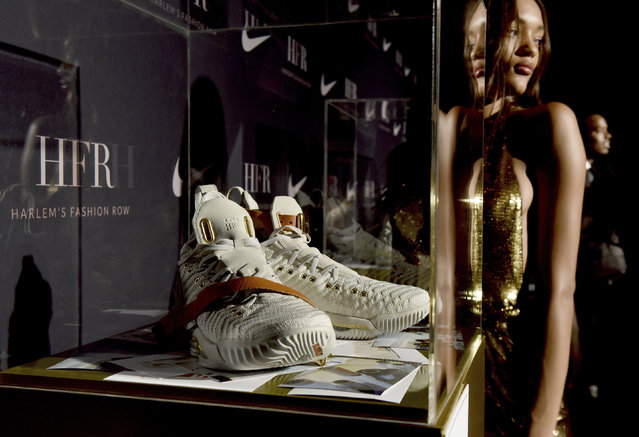