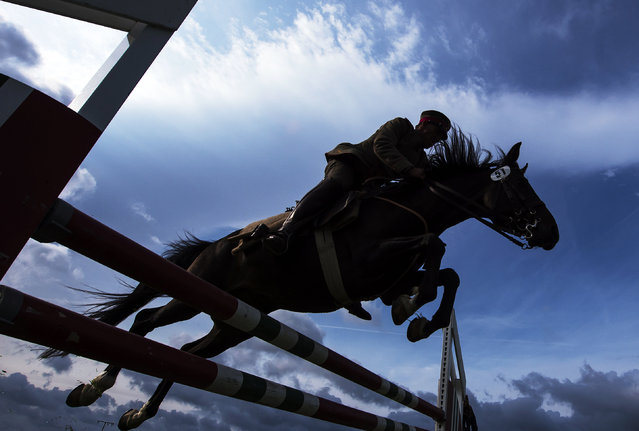 German Josef Fuchs and his horse “Aragon” clear a hurdle during the fault and style jumping at the 4th International Open German Cavalry Championship in Crawinkel, central Germany, Friday, September 8, 2017. Teams and single riders from different nations compete in historic riding competitions, such as tests with lance and saber, dressage and steeplechases. (Photo by Jens Meyer/AP Photo) 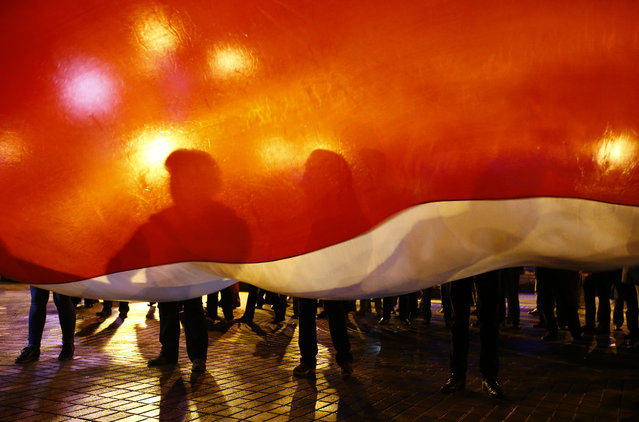 People take part in a rally to protest against the upcoming Zapad-2017 war games, held by Russian and Belarussian servicemen, and to mark the Day of Belarussian Military Glory in Minsk, Belarus September 8, 2017. (Photo by Vasily Fedosenko/Reuters) 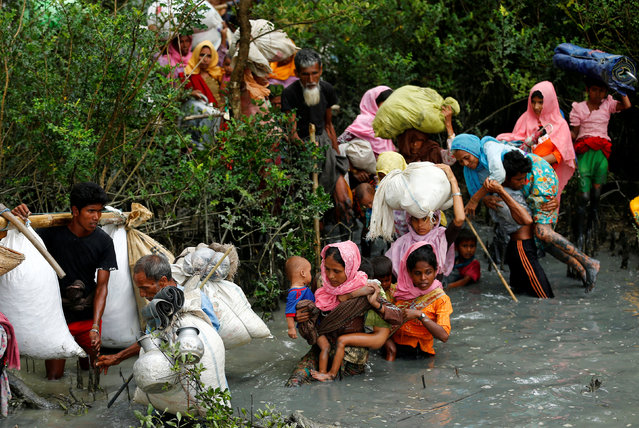 Rohingya refugees walk through water after crossing border by boat through the Naf River in Teknaf, Bangladesh, September 7, 2017. (Photo by Mohammad Ponir Hossain/Reuters) 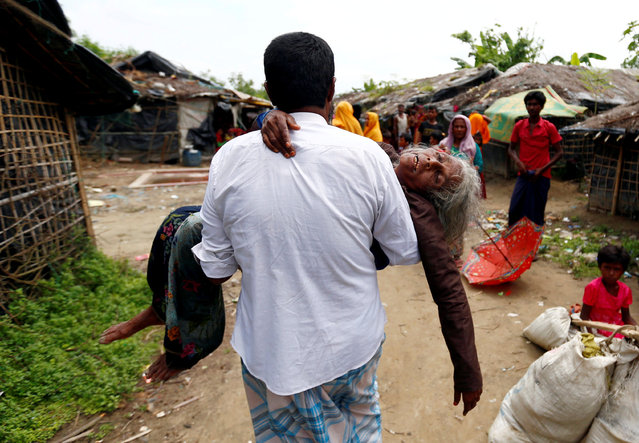 A man carries a Rohingya refugee woman from the shore after she crossed the Bangladesh-Myanmar border by boat through the Bay of Bengal in Teknaf, Bangladesh September 7, 2017. (Photo by Danish Siddiqui/Reuters) 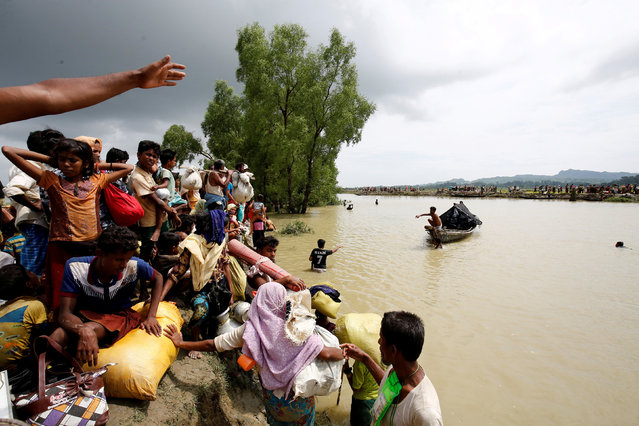 Rohingya refugees wait for boat to cross a canal after crossing the border through the Naf river in Teknaf, Bangladesh, September 7, 2017. (Photo by Mohammad Ponir Hossain/Reuters) 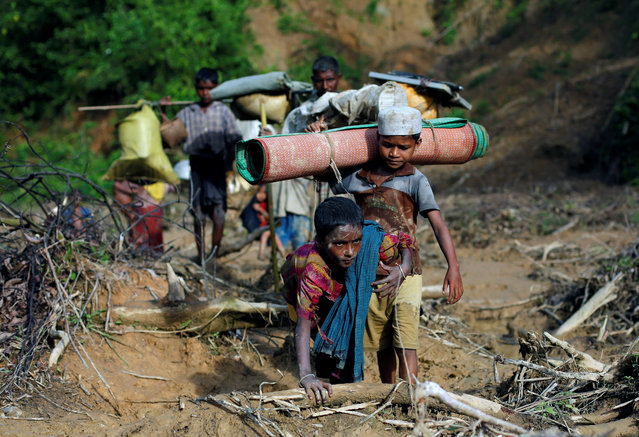 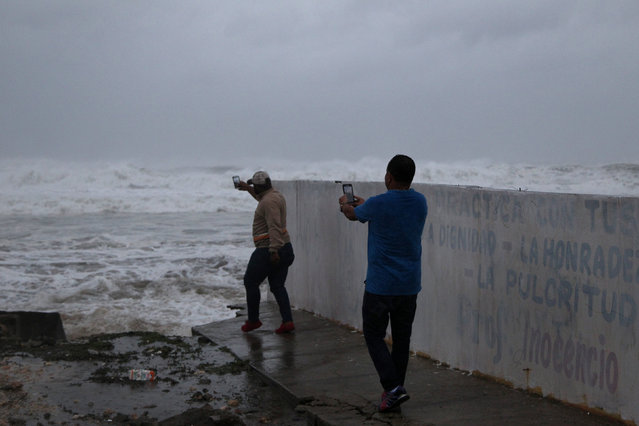 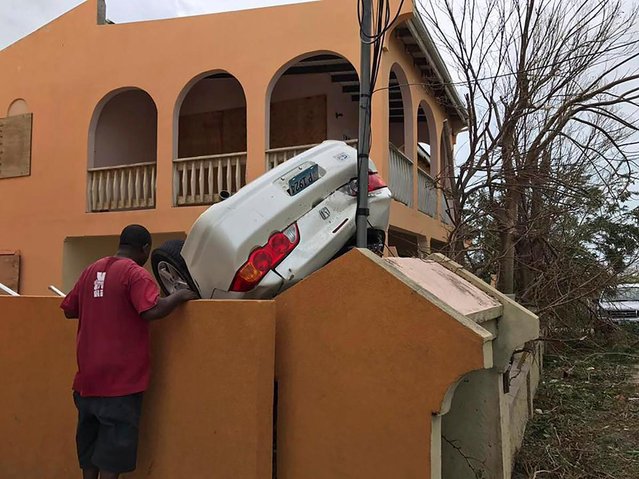 In this Wednesday, September 6, 2017 photo, a man looks at a vehicle turned upside down by winds brought on by Hurricane Irma in the British overseas territory of Anguilla. Irma scraped Cuba's northern coast Friday on a course toward Florida, leaving in its wake a ravaged string of Caribbean resort islands strewn with splintered lumber, corrugated metal and broken concrete. (Photo by Garson Kelsick via AP Photo) 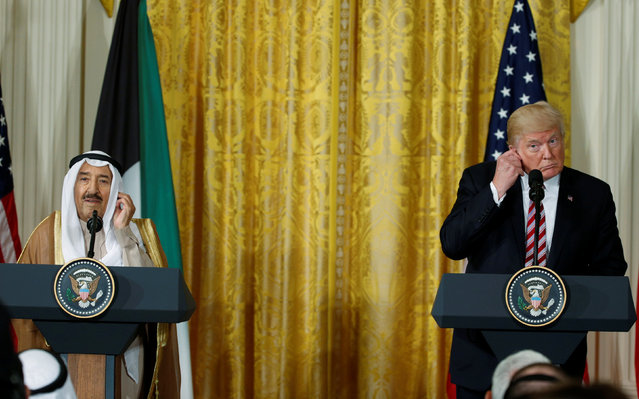 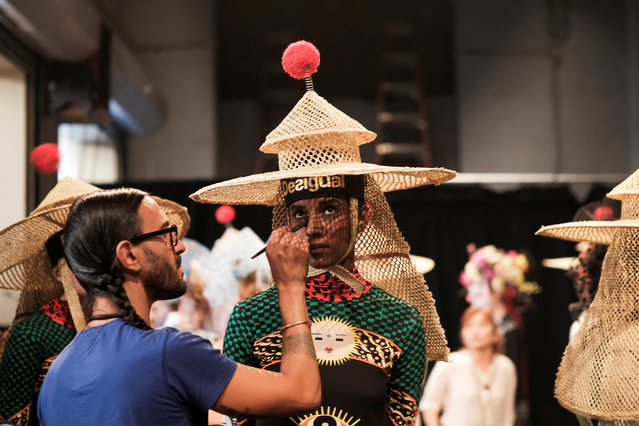 A model gets her makeup done backstage before the Desigual Spring Summer 2018 collection show during New York Fashion Week in the Manhattan borough of New York City, U.S., September 7, 2017. (Photo by Brenna Weeks/Reuters) 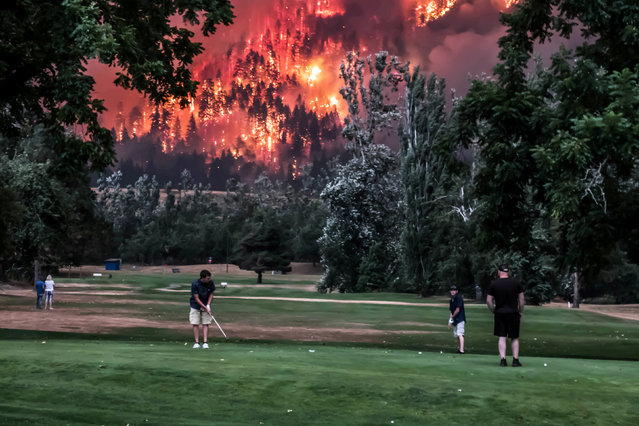 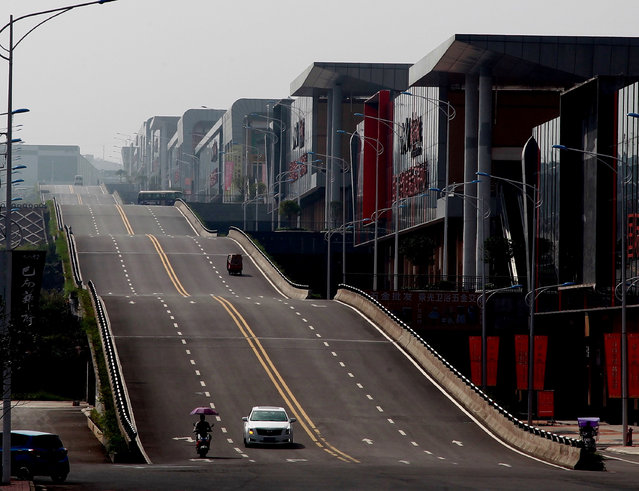 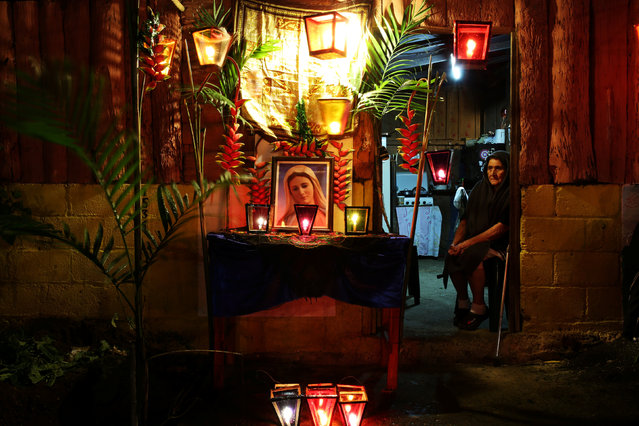 A woman sits outside her house during the Lantern Festival celebrating the eve of the nativity of the Virgin Mary in Apaneca, El Salvador, September 7, 2017. (Photo by Jose Cabezas/Reuters) 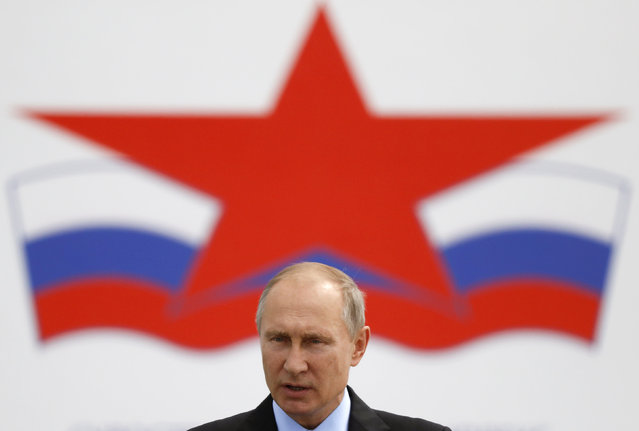 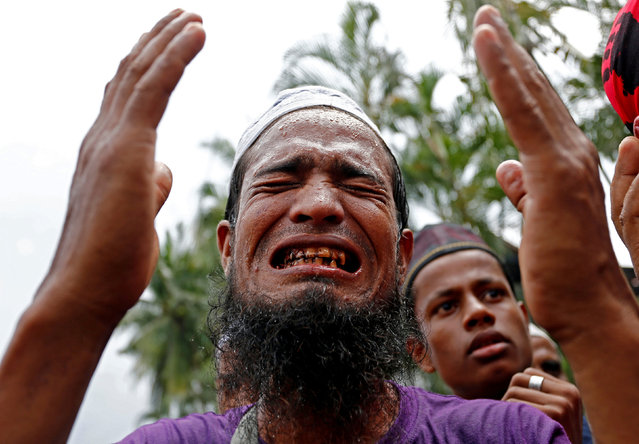 A Rohingya muslim living in Malaysia protests against the treatment of Myanmar's Rohingya Muslims near the Myanmar embassy in Kuala Lumpur, Malaysia September 8, 2017. (Photo by Lai Seng Sin/Reuters) 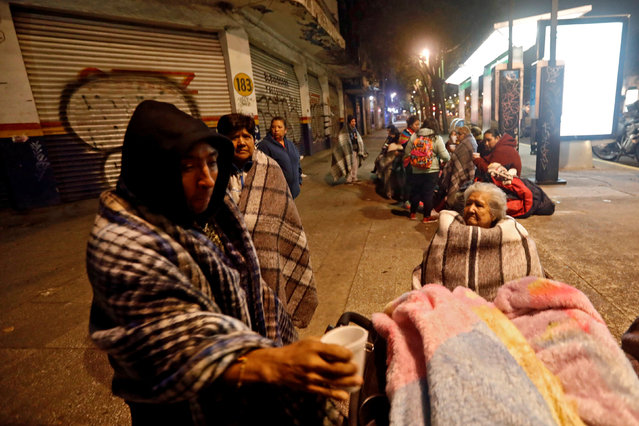 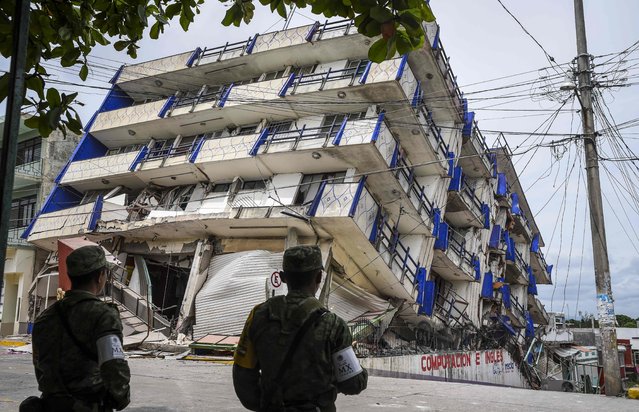 Soldiers stand guard a few metres away from the Sensacion hotel which collapsed with the powerful earthquake that struck Mexico overnight, in Matias Romero, Oaxaca State, on September 8, 2017. Mexico's most powerful earthquake in a century killed at least 35 people, officials said Friday, after it struck the Pacific coast, wrecking homes and sending families fleeing into the streets. (Photo by Victoria Razo/AFP Photo) 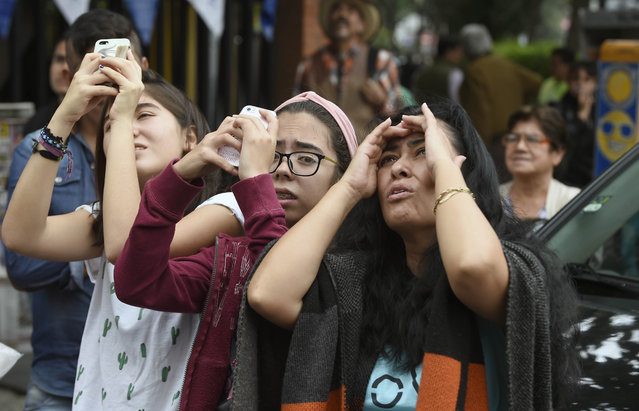 passers-by take snapshots of firefighters working on a building, damaged during the 8.2 earthquake that hit early today, in Mexico City on September 8, 2017. (Photo by Alfredo Estrella/AFP Photo) 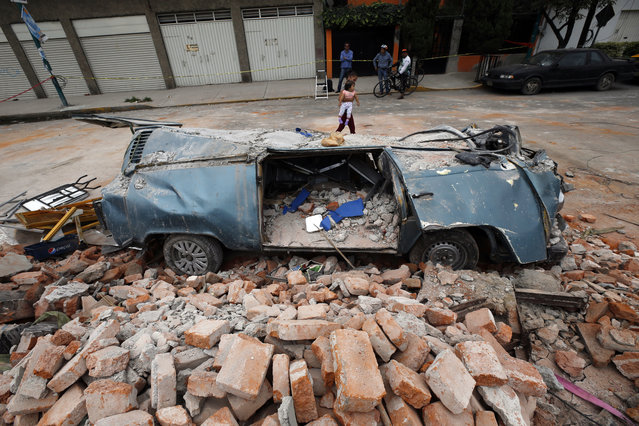 A van sits in a pile of rubble after it was smashed by a wall that collapsed during a massive earthquake, in Mexico City, Friday September 8, 2017. One of the most powerful earthquakes ever to strike Mexico hit off its southern Pacific coast, killing at least 35 people, toppling houses, government offices and businesses. Mexico's capital escaped major damage, but the quake terrified sleeping residents, many of whom still remember the catastrophic 1985 earthquake that killed thousands and devastated large parts of the city. (Photo by Marco Ugarte/AP Photo) 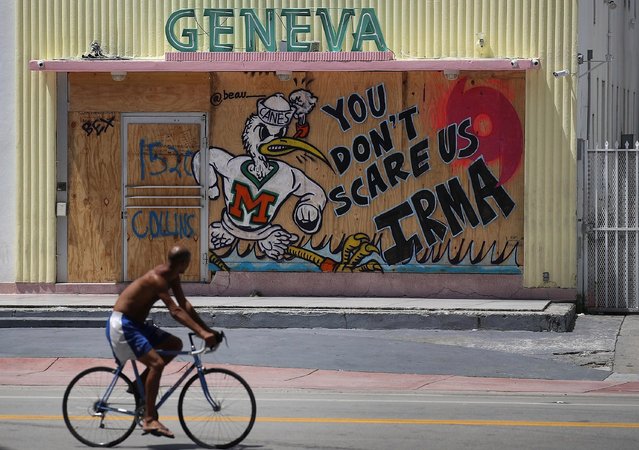 A message reading “You Don't Scare Us Irma” is written on plywood being used to cover the windows of a building as people prepare for the arrival of Hurricane Irma on September 8, 2017 in Miami Beach, Florida. Florida appears to be in the path of the Hurricane which may come ashore at category 4. (Photo by Joe Raedle/Getty Images) 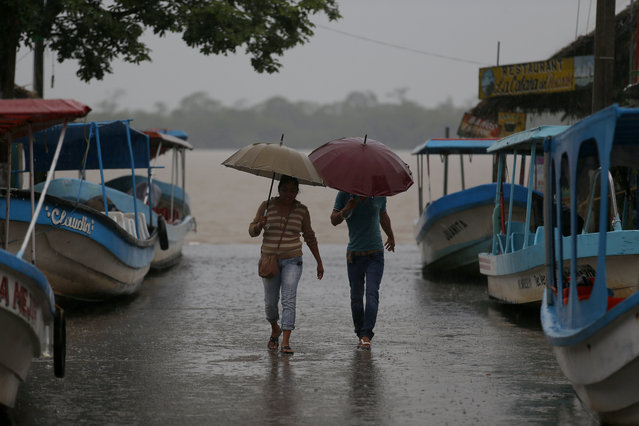 Residents walk past boats that were moved on land in preparation for the expected arrival of Hurricane Katia, in Tecolutla, Veracruz state, Mexico, Friday, September 8, 2017. Hurricane Katia in the Gulf of Mexico is stationary north-northeast of Veracruz and forecasters didn't expect much movement overnight. (Photo by Eduardo Verdugo/AP Photo) 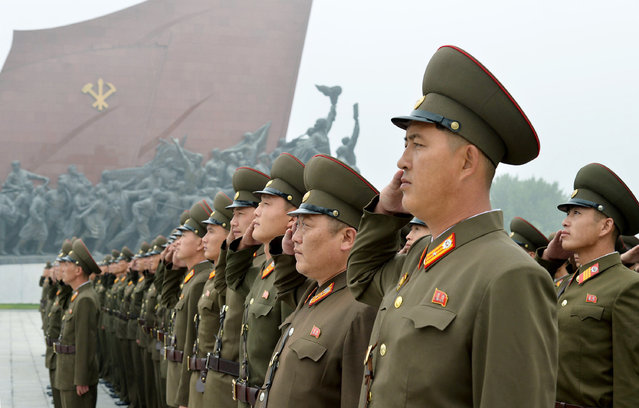 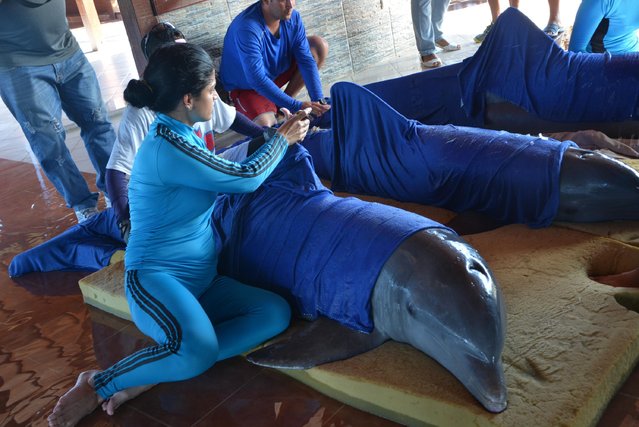 Handlers from the Cayo Guillermo dolphinarium prepare dolphins for their transfer to the dolphinarium in Cienfuegos, located on Cuba's southern coast, just hours before the arrival of Hurricane Irma, Friday, September 8, 2017. Irma spun along the northern coast of Cuba, where thousands of tourists were evacuated from low-lying keys off the coast dotted with all-inclusive resorts. (Photo by Osvaldo Gutierrez Gomez/ACN via AP Photo) 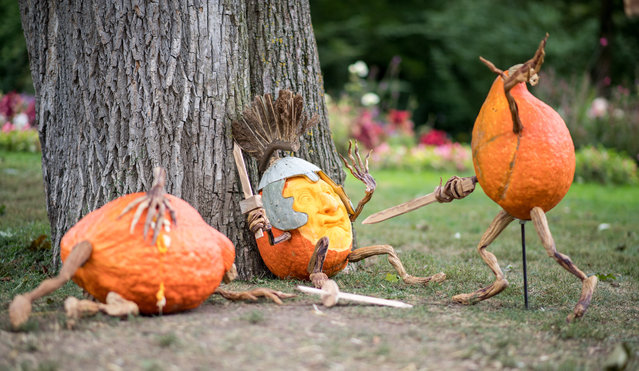