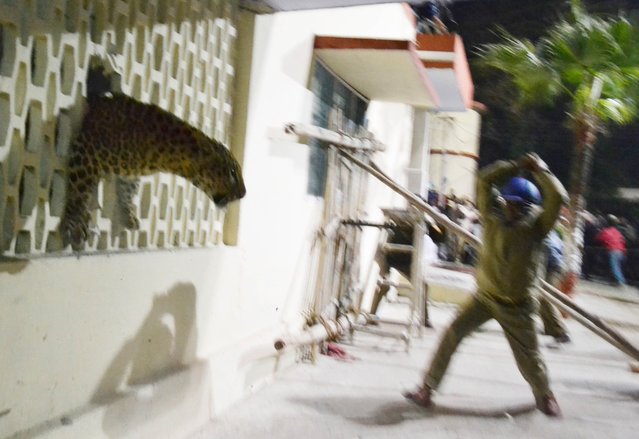 A leopard squeezes through a hole in the wall of the Meerut Cantonment Hospital as an official approaches in Meerut on February 23, 2014. A leopard sparked panic in a north Indian city when it strayed inside a hospital, a cinema and an apartment block before evading captors, an official said. (Photo by AFP Photo) 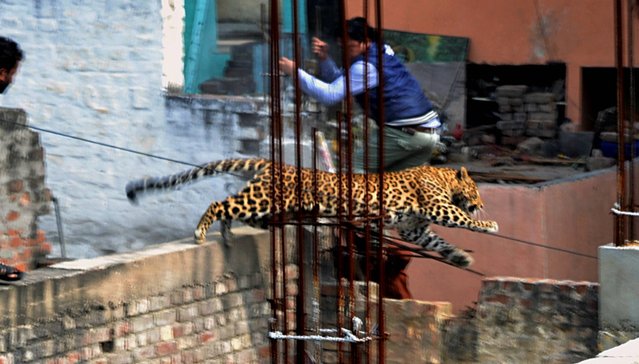 In this Sunday, February 23, 2014 photo, an Indian man moves out of the way of a leopard in the northern Indian city of Meerut, India. Forestry officials and police armed with tranquilizer darts searched for a leopard that injured six people in the northern Indian city, creating panic and driving people indoors, police said Tuesday. (Photo by AP Photo) 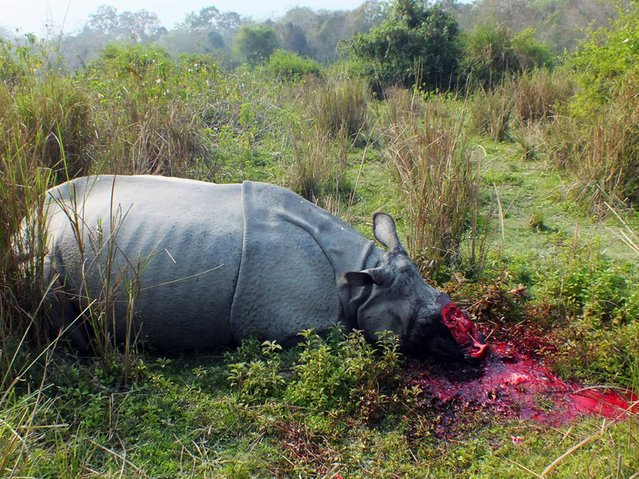 The body of a rhinoceros, which was killed and de-horned by poachers, lies on the ground in India's Burapahar range of Kaziranga, some 250 kms east of Guwahati, on February 24, 2014. Seven one-horned rhinoceroses have been killed in the area in 2014. (Photo by Anuwar Hazarika/AFP Photo) 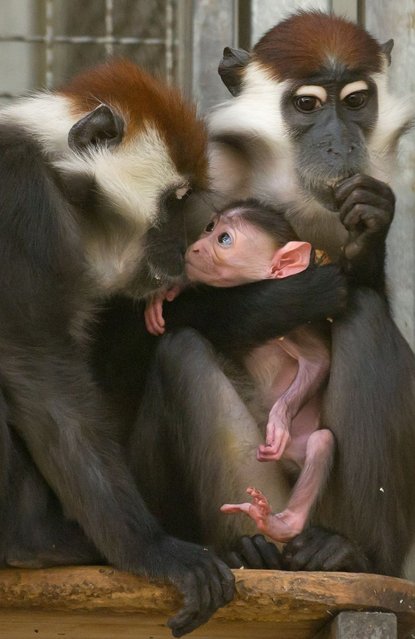 A collared mangabey monkey Sina (R) holds its offspring next to another female Gina on February 25, 2014 at the zoo in Berlin their offspring in her arms. (Photo by Tim Brakemeier/AFP Photo/DPA) 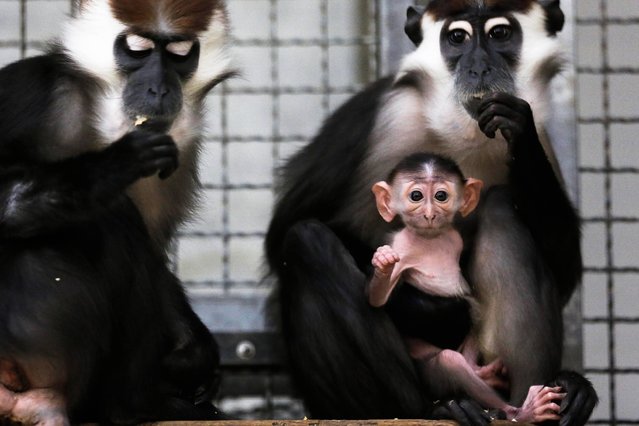 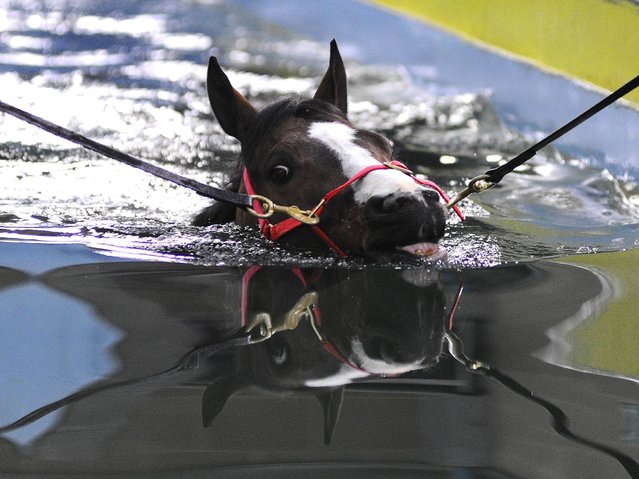 A racehorse exercises in the pool at Jonjo O'Neill's Jackdaws Castle stables on February 27, 2014 in Cheltenham, England. (Photo by Alan Crowhurst/Getty Images) 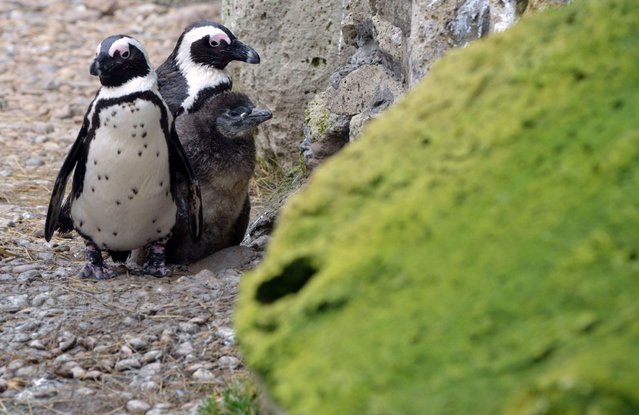 Young Penguins are pictured in the zoo of Szeged, Hungary near the Serbian border on February 27, 2014. (Photo by Csaba Segesvari/AFP Photo) Two tourists sit and feed hundreds of rabbits at Okunoshima Island on February 24, 2014 in Takehara, Japan. Okunoshima is a small island located in the Inland Sea of Japan in Hiroshima Prefecture. The Island often called Usagi Jima or “Rabbit Island” is famous for it's rabbit population that has taken over the island and become a tourist attraction with many people coming to the feed the animals and enjoy the islands tourist facilities which include a resort, six hole golf course and camping grounds. During World War II the island was used as a poison gas facility. From 1929 to 1945, the Japanese Army produced five types of poison gas on Okunoshima Island. The island was so secret that local residents were told to keep away and it was removed from area maps. Today ruins of the old forts and chemical factories can be found all across the island. (Photo by Chris McGrath/Getty Images) 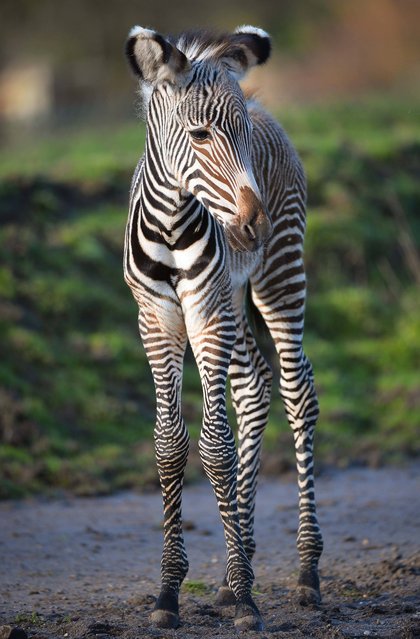 Undated handout photo issued by Chester Zoo of a newborn Grevy's zebra, the first born at the zoo for 34 years. There are thought to be less than 2,500 left in the wild. The foal, who was born with brown stripes that will turn black as she matures, arrived on Saturday to first time parents Nadine and Mac. (Photo by Chester Zoo/PA Wire) 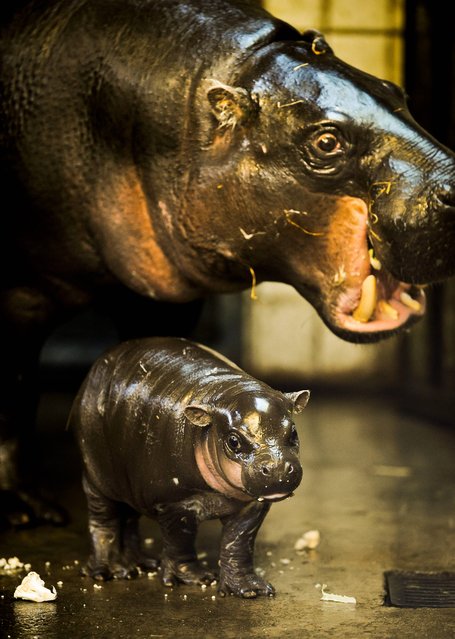 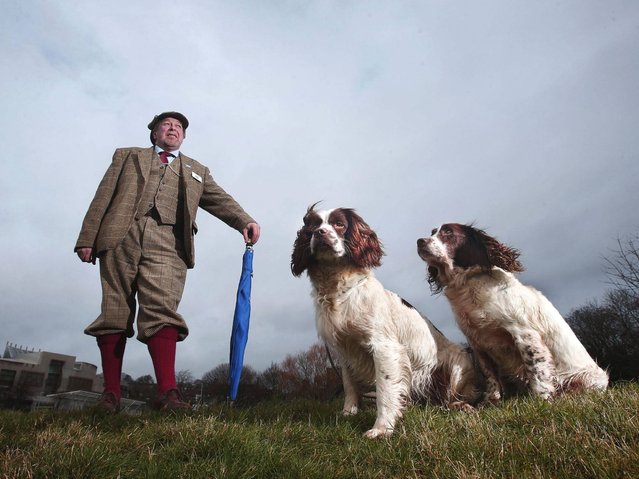 Scottish Gamekeepers Association (SGA) member George MacDonald with his Springer Spaniels Wriggle and Rosie outside the Scottish parliament in Edinburgh, before the SGA presented a 4,158-signature petition to Environment Secretary Richard Lochhead, calling for the ban to be reversed for working dogs on the grounds of animal welfare. (Photo by Danny Lawson/PA Wire) 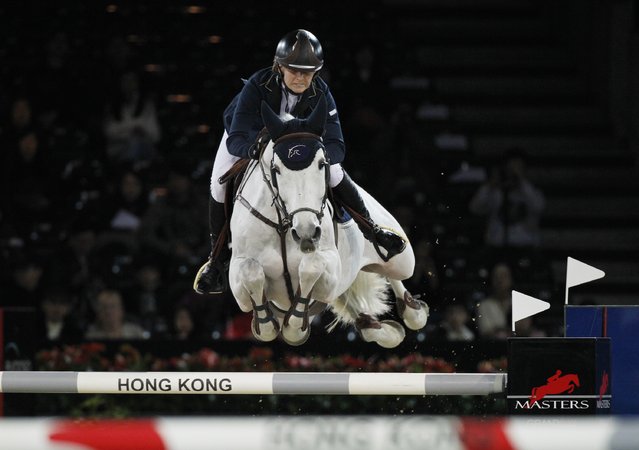 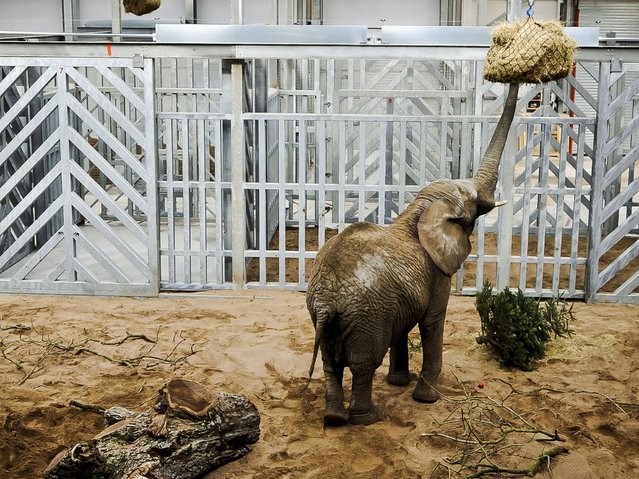 Buta the female African elephant, the latest addition to 'Elephant Eden' at Noah's Ark Zoo Farm, in Bristol, as she gets used to her new surroundings in the largest purpose-built elephant habitat in Northern Europe. (Photo by Ben Birchall/PA Wire) 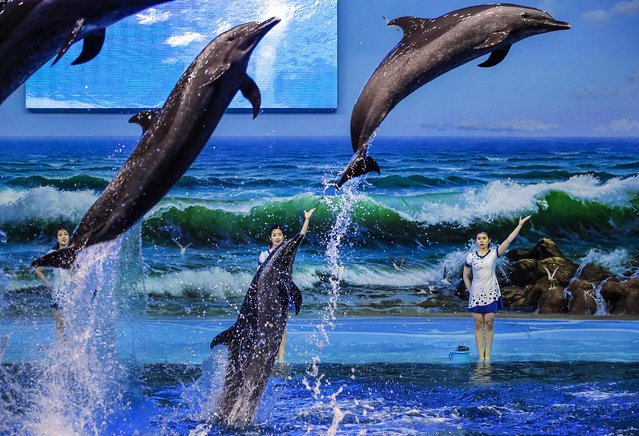 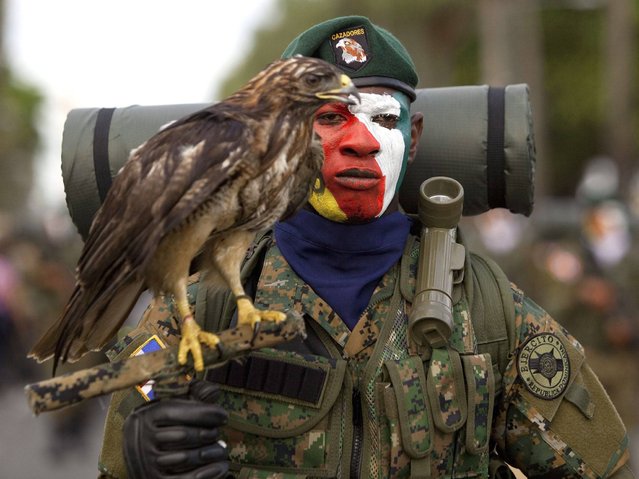 Members of the Dominican Armed Forces participate in a commemorative act on the 170th anniversary of national independence at the esplanade of Santo Domingo, on February 27, 2014. (Photo by Orlando Barria/EPA) 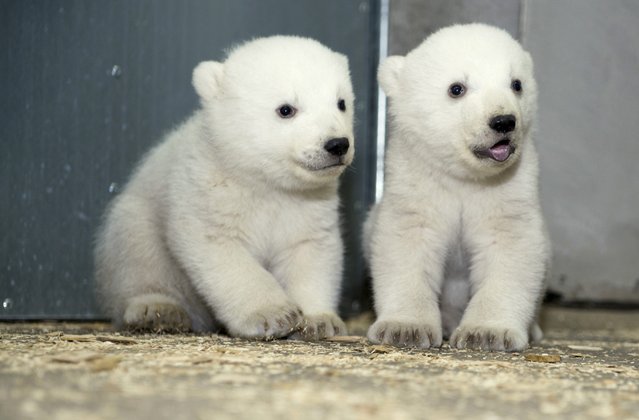 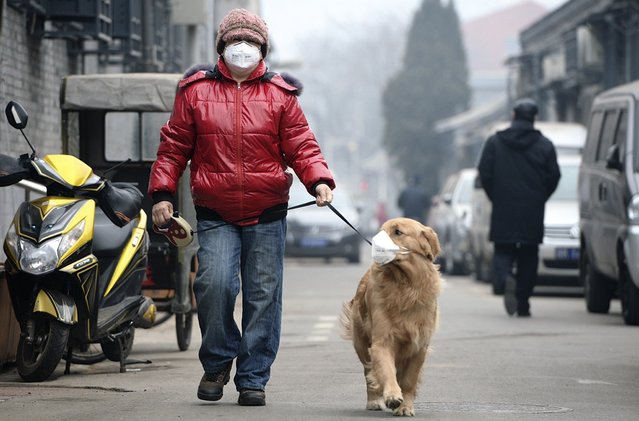 A man and his dog, both wearing masks, walk along a small alley on a hazy day in Beijing, February 23, 2014. China's capital Beijing, under fire to take effective measures against air pollution, raised its four-tiered alert system to “orange” for the first time on Friday, as heavy smog was forecast to roll into the city over the next three days. (Photo by Reuters/Stringer) 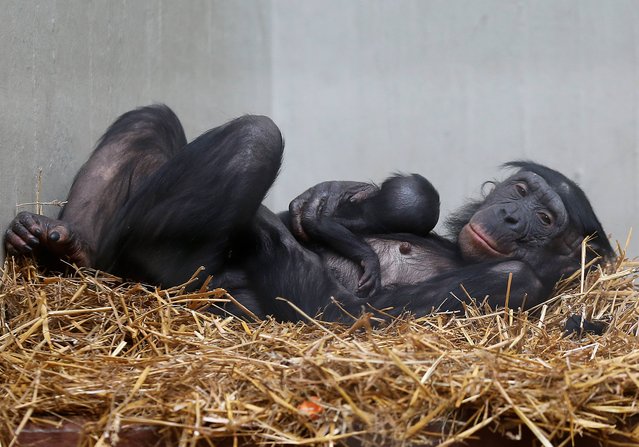 Bonobo monkey mother Muhdeblu comforts her newborn baby at the Zoo in Wuppertal, Germany, Wednesday, February 26, 2014. The yet unnamed female baby was born on February 6, 2014 and supporters are asked to vote for a name. (Photo by Frank Augstein/AP Photo) 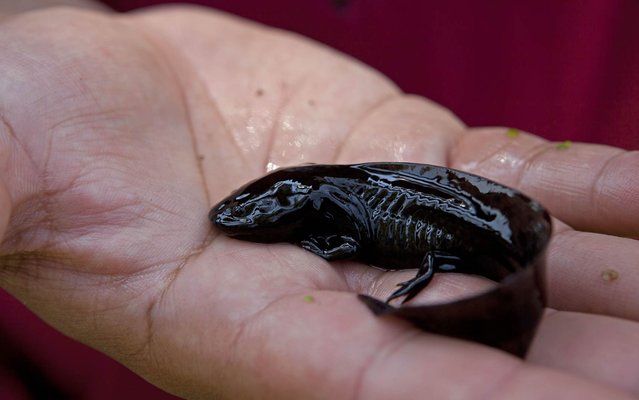 In this Friday, February 21, 2014 photo, Biologist Armando Tovar Garza from Mexico's National Autonomous University holds a young axolotl in his hand at an experimental canal run by the university in the Xochimilco network of lakes and canals in Mexico City. Investigators have begun a search in hopes of finding what may be the last free-roaming axolotl. Not one axolotl was found during last year's effort at finding them in the wild in Xochimilco, their only natural habitat. The axolotl is known as the “water monster” and the “Mexican walking fish”. (Photo by Dario Lopez-Mills/AP Photo) 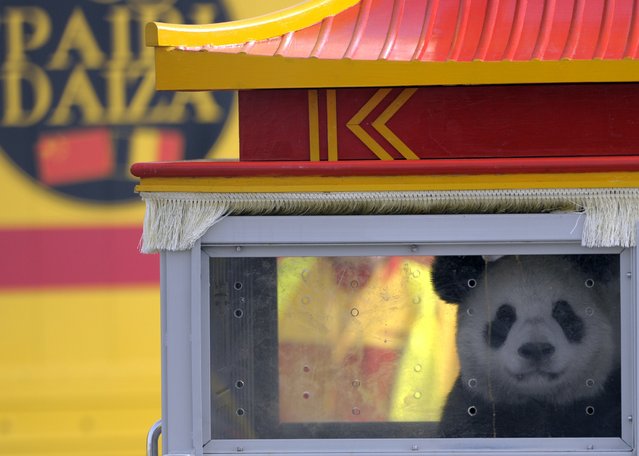 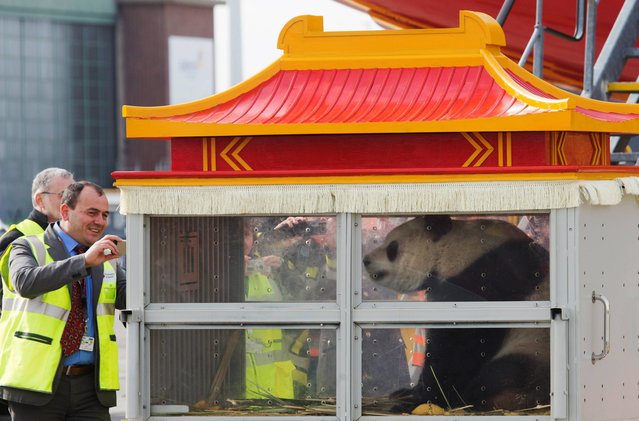 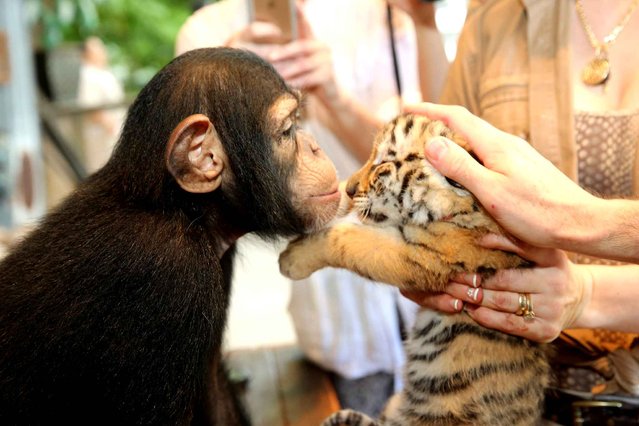 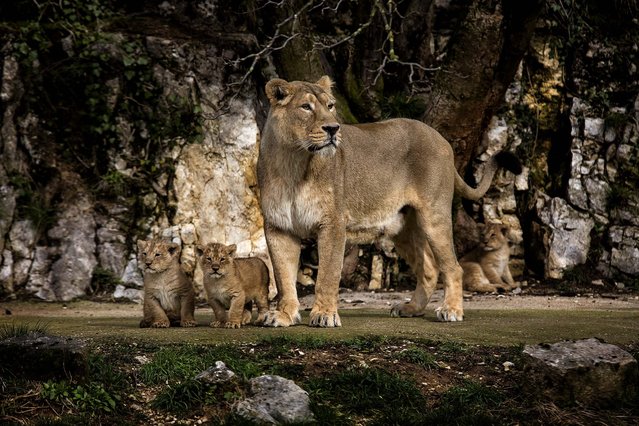 Asiatic lion Shiva, the mother of three cubs, looks out over her domain in the Besancon Zoo in eastern France, on February 27, 2014. The zoo held off announcing the December 31, 2013 births until this week, afraid the two females and a male might not survive. There are about 300 Asiatic lions in the wild, all in an Indian reserve, according to the WWF. It's one of the world's rarest species. (Photo by Laurent Cipriani/Associated Press) 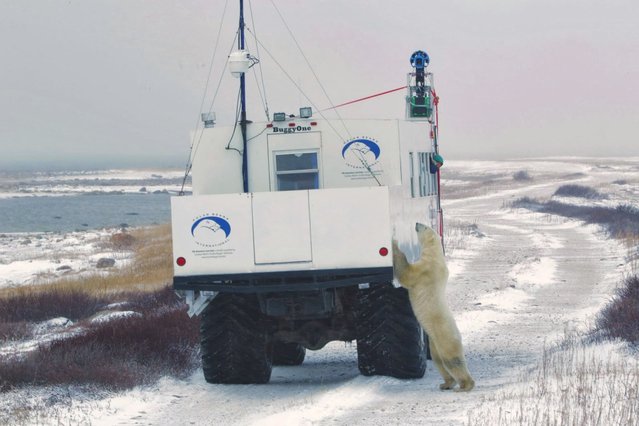