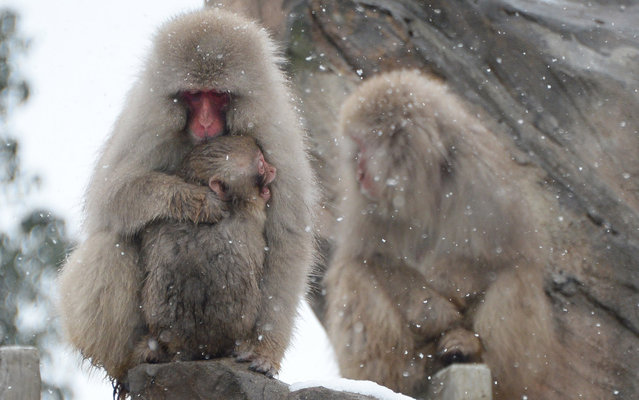 Monkeys endure the cold under snow at Ueno Zoo in Tokyo on February 14, 2014. Heavy winter weather is expected to hit Tokyo's metropolitan area again, bringing with it an estimated 10cm of snow. (Photo by Toru Yamanaka/AFP Photo) 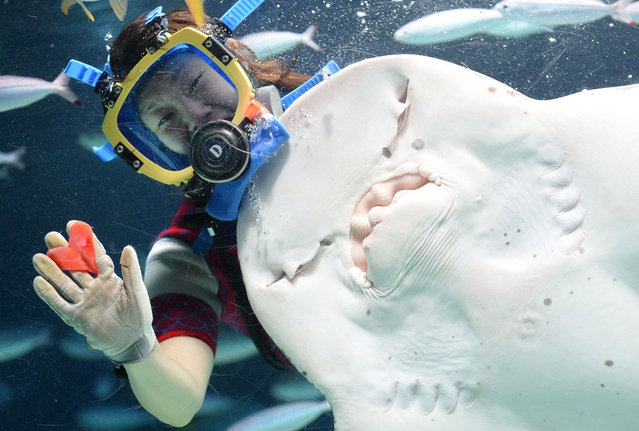 A diver feeds a ray with a piece of heart-shaped squid meat dyed red at the Sunshine Aquarium in Tokyo as a feature for Valentine's Day on February 10, 2014. (Photo by Toru Yamanaka/AFP Photo) 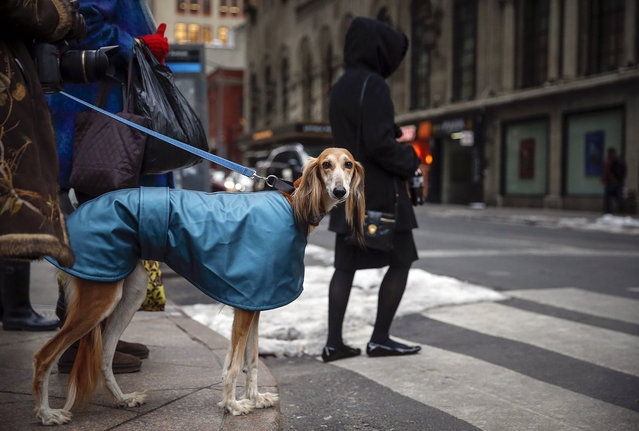 A dog waits on the corner of 31st street and 7th avenue in New York, February 9, 2014. Dogs are arriving for the 139th Annual Westminster Kennel Club Dog Show that starts on Monday. (Photo by Shannon Stapleton/Reuters) 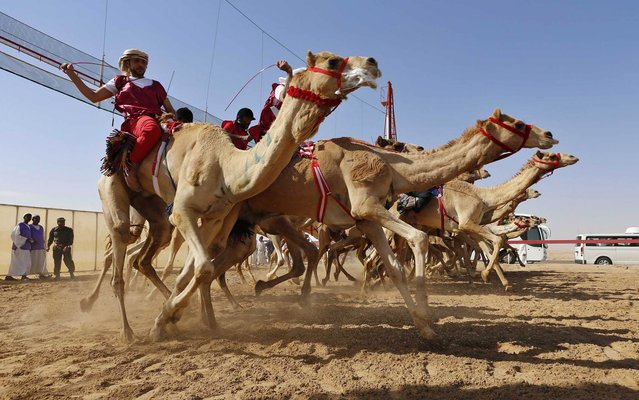 Jockeys compete on their mounts during a camel race, organized as part of the Sultan Bin Zayed Heritage Festival, in Al Ain February 14, 2014. (Photo by Saleh Salem/Reuters) 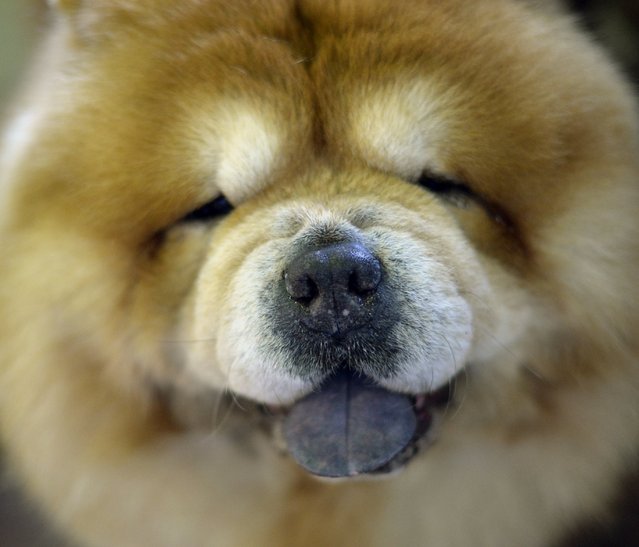 A Chow Chow is seen in the benching area at Pier 92 and 94 in New York City for the first day of competition at the 138th Annual Westminster Kennel Club Dog Show February 10, 2014. The Westminster Kennel Club Dog Show is a two-day, all-breed benched show that takes place at both Pier 92 and 94 and at Madison Square Garden in New York City. (Photo by Timothy Clary/AFP Photo) 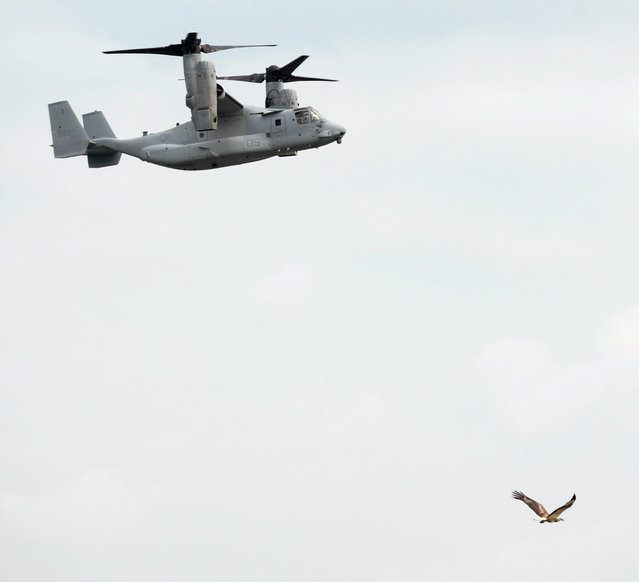 An eagle (R) flies past as the Marine Corps' MV-22B Osprey, the world's first production tilt-rotor aircraft, performs aerial display during the Singapore Airshow on February 12, 2014. Airbus' flagship A380 got a fresh lift February 12 after leasing firm Amedeo firmed up its order for 20 of the superjumbo aircraft in a deal worth $8.3 billion. (Photo by Roslan Rahman/AFP Photo) 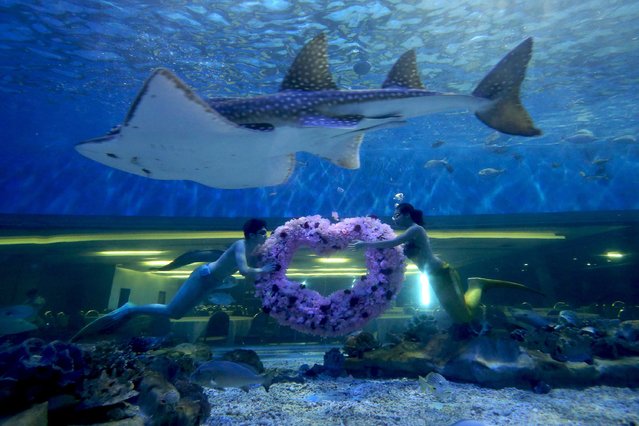 Filipino divers in 'Mermaid' costumes swim near a heart-shaped decoration during a press preview at the Oceanarium of the Manila Ocean Park, Philippines, 13 February 2014. The under water love dance between a mermaid and her merman scene is part of the Valentine's Day attractions featured in the marine life park facility. (Photo by Dennis M. Sabangan/EPA) 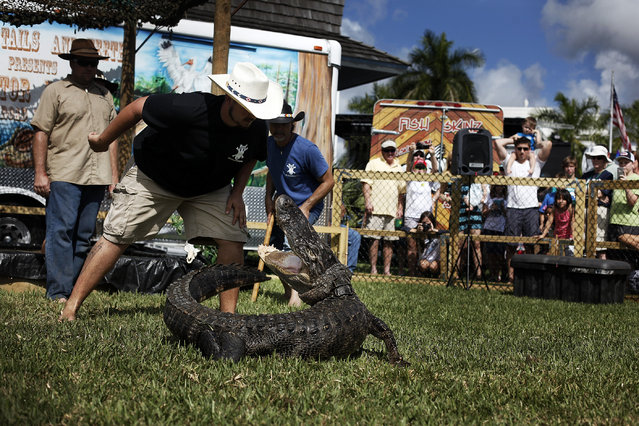 Andy Riffle, of the popular television show Gator Boys, prepares to wrestle an alligator during the Everglades Seafood Festival on Saturday, February 8, 2014 in Everglades City. Tens of thousands of visitors came out to the festival that seems to take over the fishing community. (Photo by Dania Maxwell/Naples Daily News) 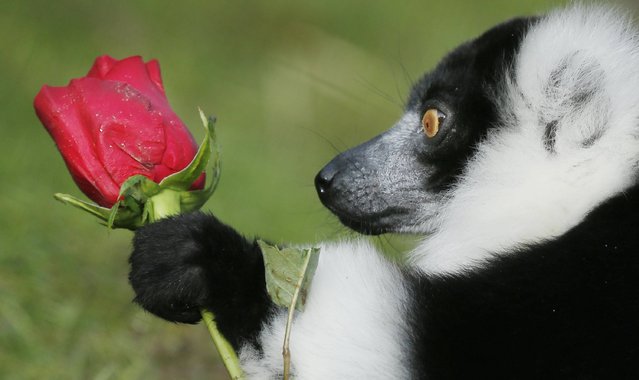 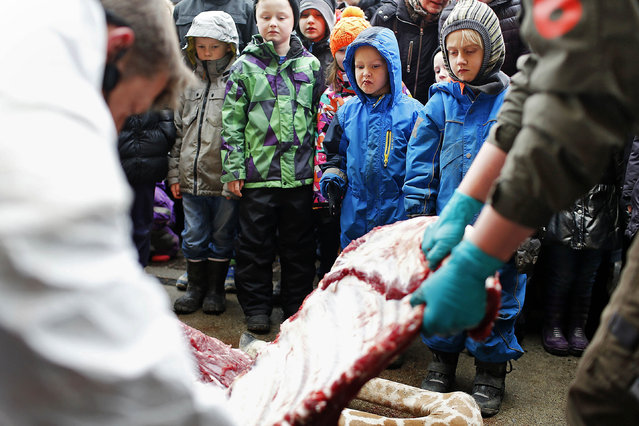 Children watch as Marius, a male giraffe, is dissected, at the Copenhagen Zoo, in Denmark, Sunday, February 9, 2014. Copenhagen Zoo turned down offers from other zoos and 500,000 euros ($680,000) from a private individual to save the life of a healthy giraffe before killing and slaughtering it Sunday to follow inbreeding recommendations made by a European association. The 2-year-old male giraffe, named Marius, was put down using a bolt pistol and its meat will be fed to carnivores at the zoo, spokesman Tobias Stenbaek Bro said. Visitors, including children, were invited to watch while the giraffe was dissected. (Photo by Rasmus Flindt Pedersen/AP Photo/Polfot) 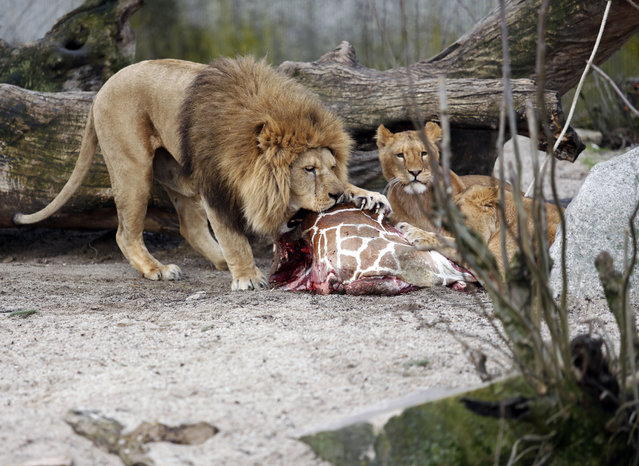 The carcass of Marius, a male giraffe, is eaten by lions after he was put down in Copenhagen Zoo on Sunday, February 9, 2014. (Photo by Rasmus Flindt Pedersen/AP Photo/Polfot) 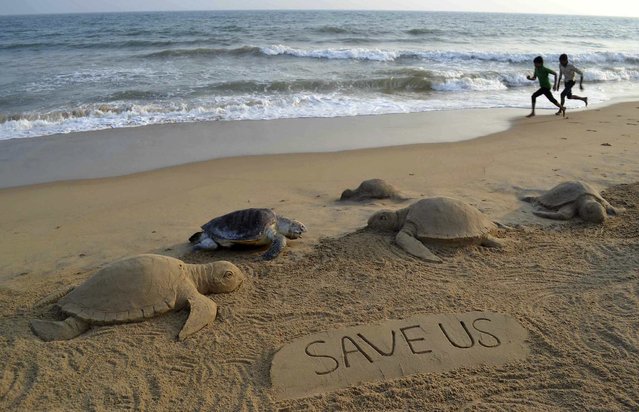 Boys run near sand sculptures of Olive Ridley turtles made by Indian sand artist Sudarshan Pattnaik, next to a dead turtle at the beach in Puri, in the eastern Indian state of Odisha February 9, 2014. (Photo by Reuters/Stringer) 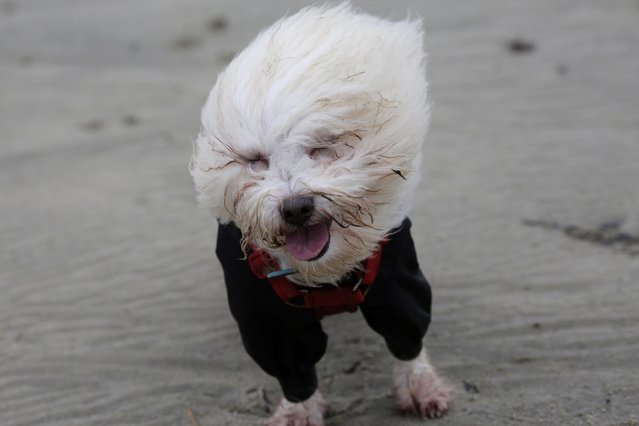 A Coton de Tulear dog is blown by strong winds on the beach in Lyme Regis, southern England February 14, 2014. (Photo by Kieran Doherty/Reuters) 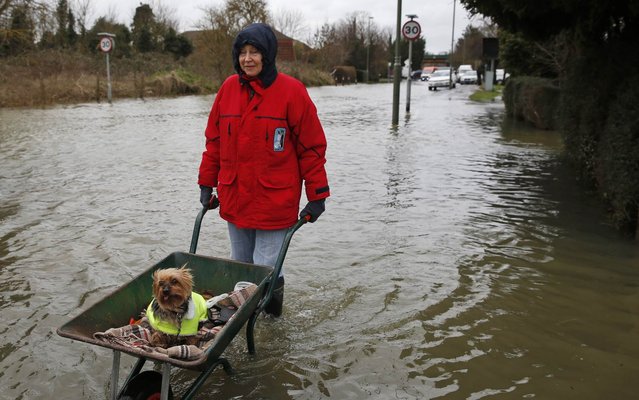 Celia, last name not given, a local resident pushes her dog in a wheelbarrow, in the flooded part of the town of Staines-upon-Thames, England, Wednesday, February 12, 2014. Prime Minister DavidCameron insisted Tuesday that money is no object in the battle against the widespread flooding that has engulfed parts of England. Canceling a visit to the Middle East to oversee flood-fighting efforts, he told journalists that “whatever money is needed for this relief effort will be spent” as Britain deals with some of its wettest weather in 250 years. (Photo by Lefteris Pitarakis/AP Photo) 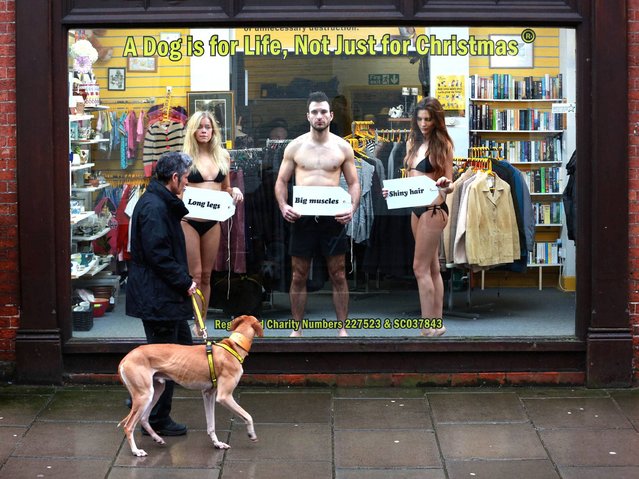 Jack, a Lurcher from Dogs Trust Salisbury, walks past a window display of models in a Dogs Trust shop window in Salisbury, as part of a campaign to discourage the impulse buying of dogs ahead of Valentine's Day, on February 10, 2014. (Photo by Matt Alexander/PA Wire) 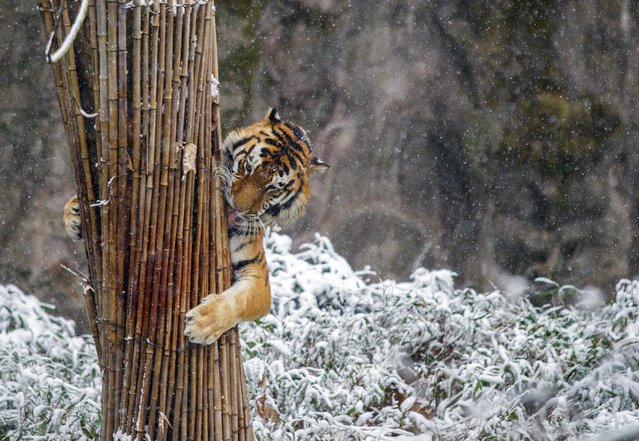 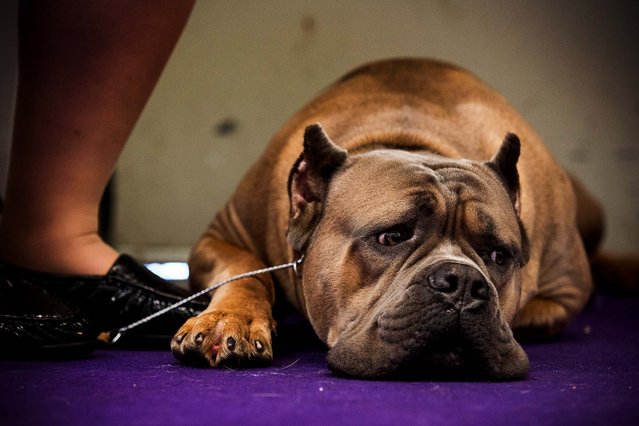 A cane corso waits to compete during the Westminster Kennel Club Dog Show in New York, on February 11, 2014. (Photo by Andrew Burton/Getty Images) 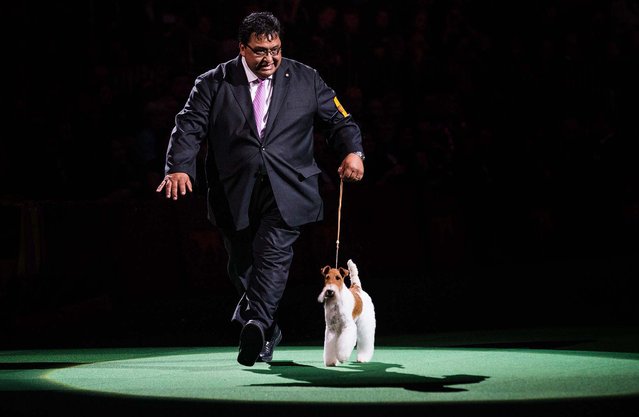 Sky, a wire fox terrier, competes with her handler, Gabriel Rangel, in the Best in Show category, on February 11, 2014. Sky became the 14th terrier to win the Best in Show award at the Westminster Kennel Club Dog Show. (Photo by Andrew Burton/Getty Images) 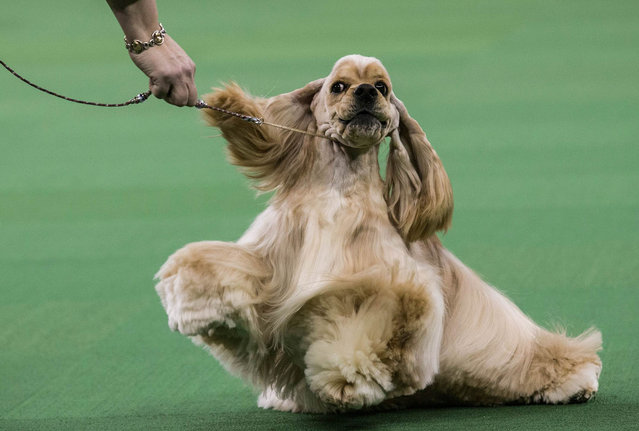 An Ascotb Cocker Spaniel competes in the Westminster Dog Show on February 11, 2014 in New York City. The annual dog show has been showcasing the best dogs from around world for the last two days in New York. (Photo by Andrew Burton/Getty Images) 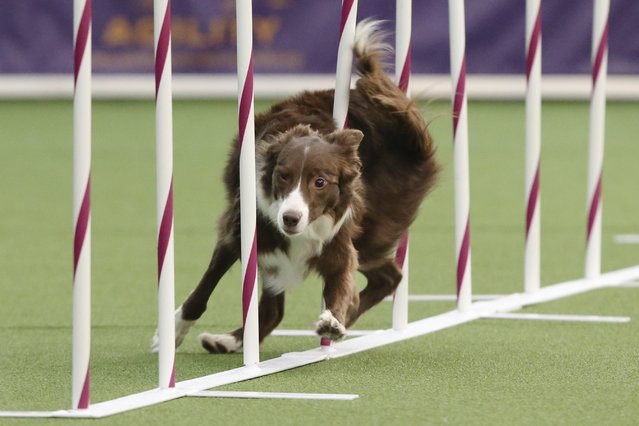 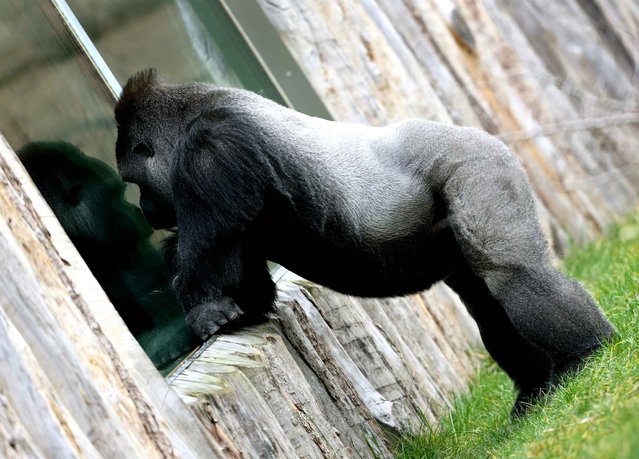 Male gorilla Kidogo looks through a window at the ape indoor enclosure of the zoo in Krefeld, western Germany on February 10, 2014. Kidogo checks the outdoor enclosure before he allows his 6-months-old baby to go outside. (Photo by Roland Weihrauch/AFP Photo/DPA) 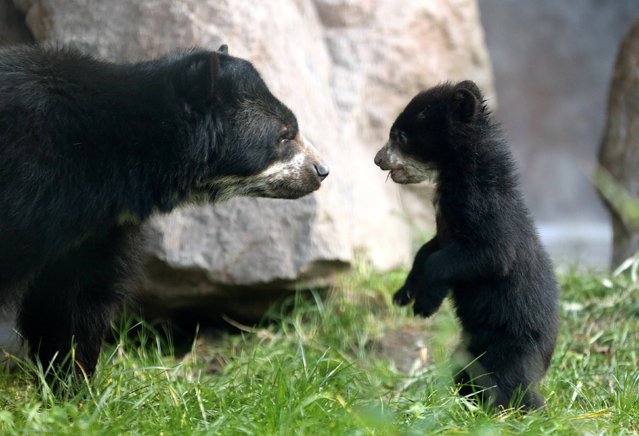 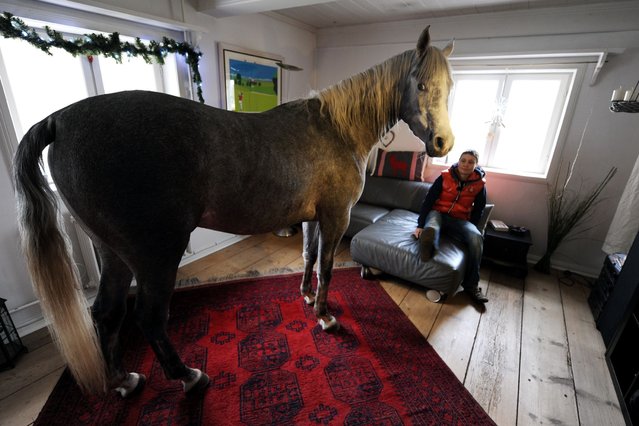 Stephanie Arndt watches her Arabian horse Nasar enter the living room of her old farm house in Holt, northern Germany on February 10, 2014. The owner of the horse, medical doctor Stephanie Arndt, took the three-year-old inside the house while hurricane “Xaver” swept over the region. Since then Nasar like to stay indoors. (Photo by Carsten Rehder/AFP Photo/DPA) 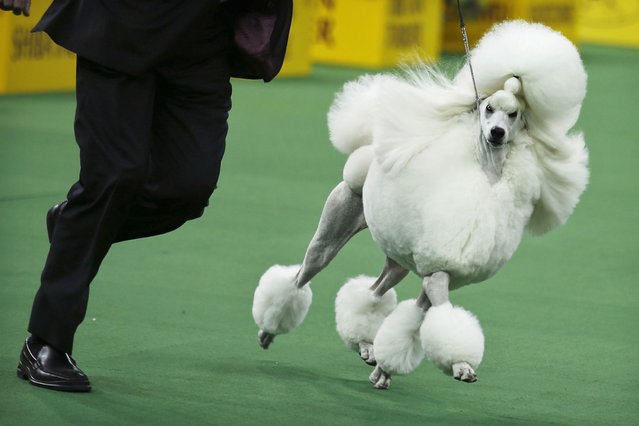 Ally, a standard poodle, competes in the non-sporting group during day one of judging of the 2014 Westminster Kennel Club Dog Show in New York. (Photo by Eduardo Munoz/Reuters) 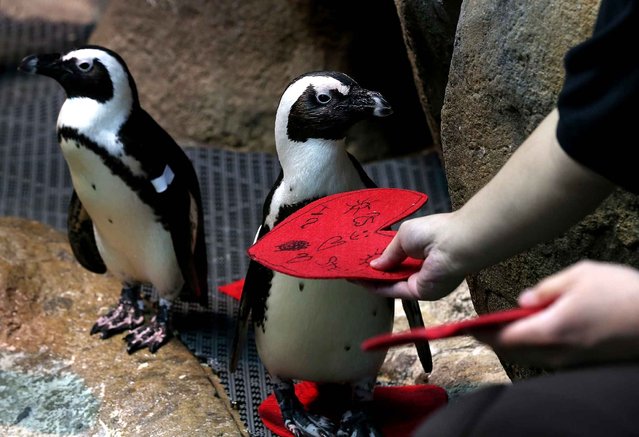 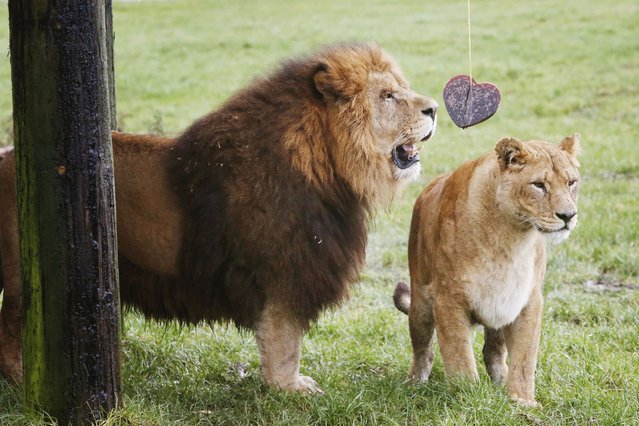