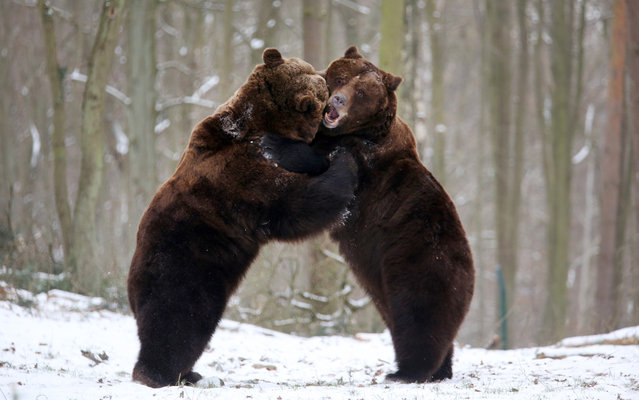 Swedish brown bears “Fred” and “Frode” play in the snow on January 30, 2014 at the Natur- und Umweltpark (NUP) animal park in Guestrow, northeastern Germany. Despite of icy temperatures, the bear brothers took a break from their winter rest. (Photo by Bernd Wuestneck/AFP Photo/DPA) 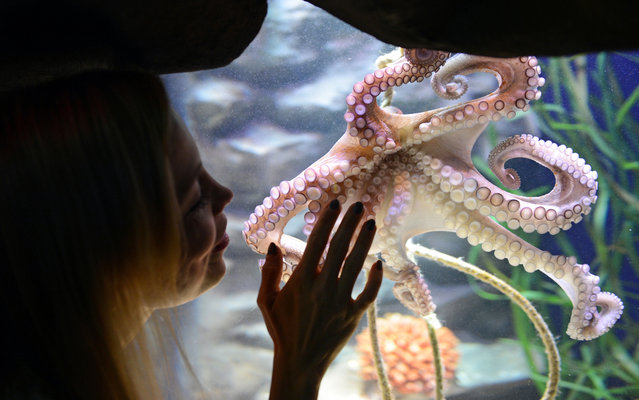 Former German boxing world champion Regina Halmich observes a female octopus, who was baptized after her name, on January 30, 2014 in AquaDom and Sea Life Berlin during an exhibition “octopus cave”. (Photo by Jens Kalaene/AFP Photo/DPA) 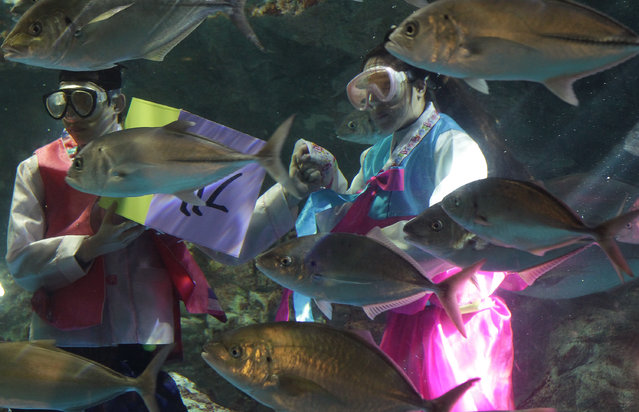 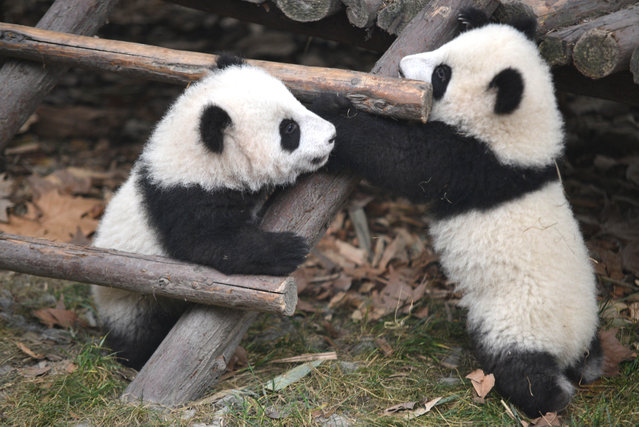 Giant pandas enjoy themselves at the Chengdu Research Base of Giant Panda Breeding on January 28, 2014 in Chengdu, Sichuan Province of China. (Photo by ChinaFotoPress/ChinaFotoPress via Getty Images) 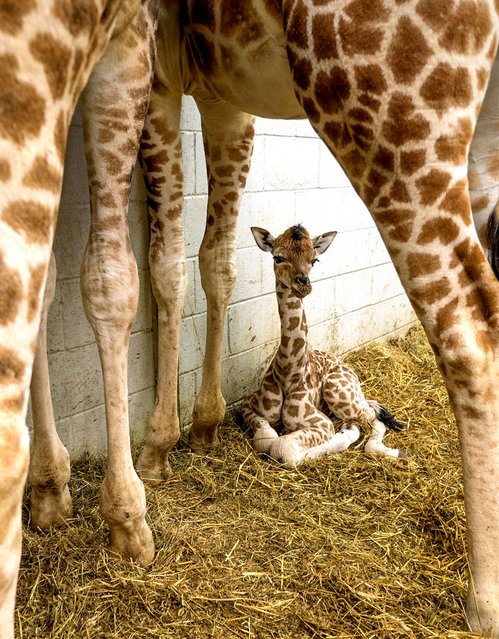 Undated handout photo issued by Paignton Zoo of a newborn giraffe which was born at the zoo on Saturday 25th January. The Rothschild's female calf was born on Saturday afternoon but already stands at six feet tall. Mother Sangha gave birth to the calf, which has not yet been named, at Paignton Zoo in Devon. (Photo by Paignton Zoo/PA Wire) 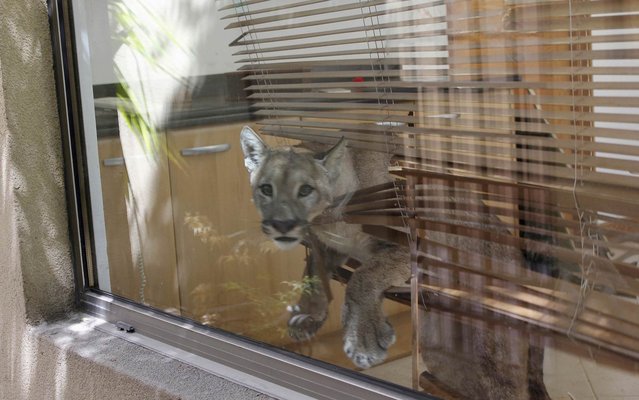 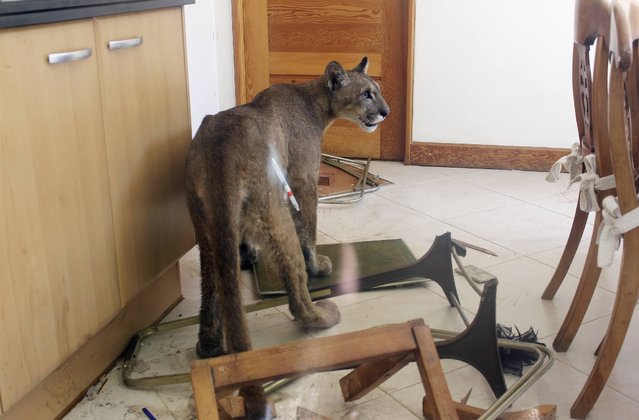 A puma is seen inside the kitchen of a residential home in this handout picture provided by the Agricultural and Livestock Service of Chile (SAG), in Santiago January 29, 2014. The animal was discovered by the homeowner and was taken to a local zoo after being sedated by authorities. Authorities are investigating how the puma appeared at the home. No one was injured, according to local media. (Photo by Reuters/Agricultural and Livestock Service of Chile (SAG)) 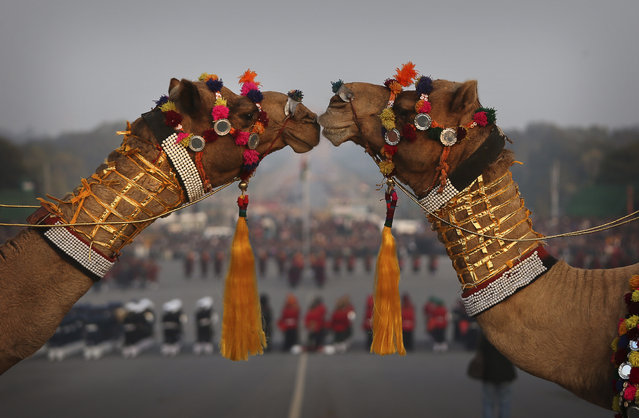 Decorated camels of India's Border Security Force stand in formation during a rehearsal of the Beating Retreat ceremony at Raisina hill which houses India's most important ministries and the presidential palace, in New Delhi, India, Monday, January 27, 2014.The ceremony performed every year on the evening of January 29 by the three wings of the Indian military marks the end of Republic Day festivities. (Photo by Manish Swarup/AP Photo) 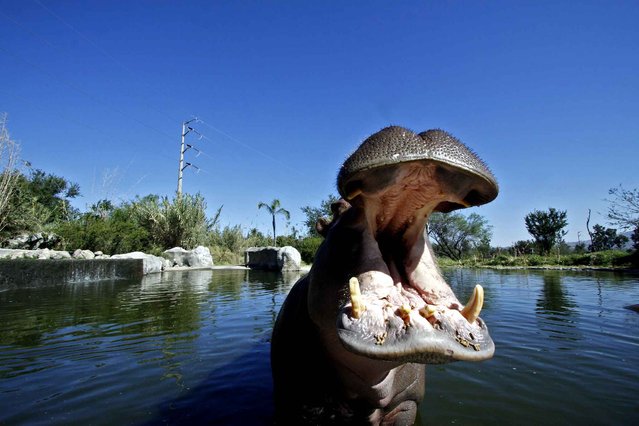 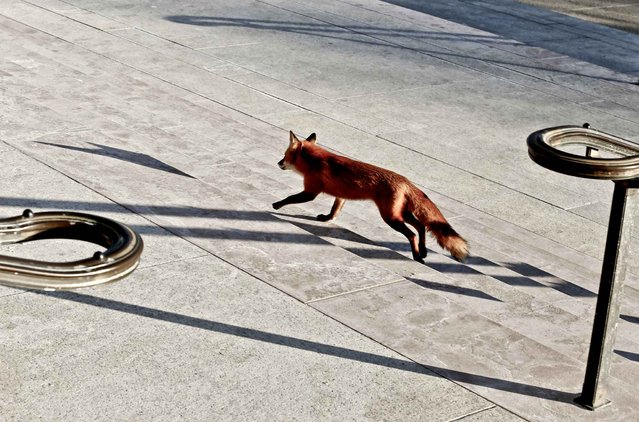 A fox strolls past the National Gallery of Art on the National Mall in Washington on January 30, 2014. Foxes can be found in and around the city's Rock Creek Park but are not frequently seen in more densely populated areas of the US capital. (Photo by Catherine MacDougall-Kamm/AFP Photo) 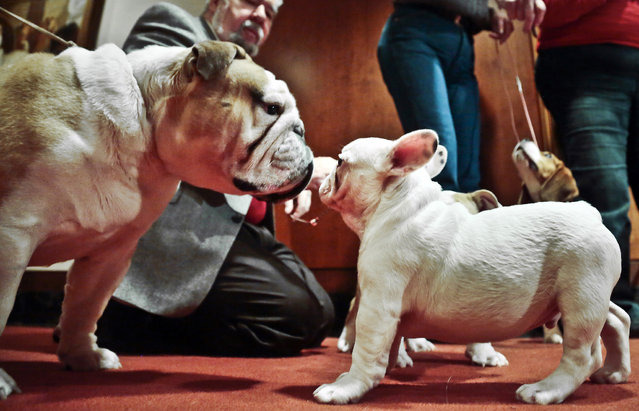 English bulldog Cassidy, left, 3, of Smithtown, N.Y., and French bulldog puppy Snowman, 12 weeks, of Boston, Ma., face each other during a news conference on Friday, January 31, 2014, in New York. The French bulldog has rocketed up the rankings to the nation's 11th most popular purebred after its numbers more than quadrupled in the last 10 years. (Photo by Bebeto Matthews/AP Photo) 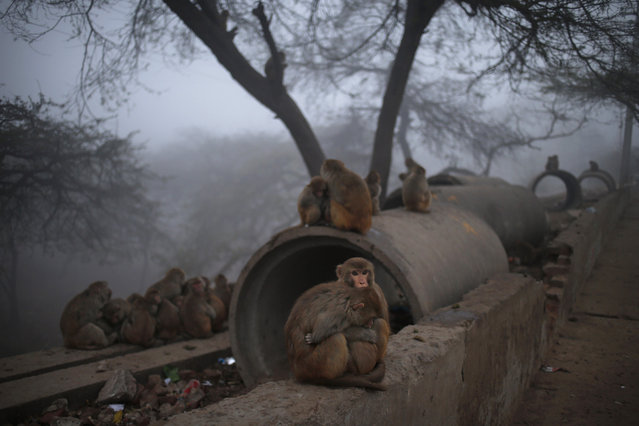 Monkeys huddle together by a roadside to keep warm early in the morning as they wait for charitable Hindus to feed them, in New Delhi, India, Thursday, January 30, 2014. (Photo by Saurabh Das/AP Photo) 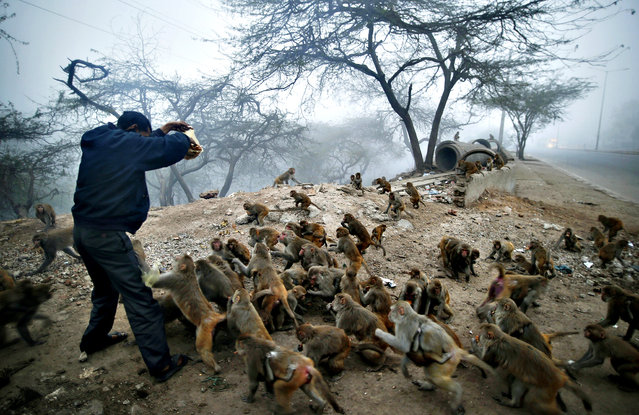 Monkeys mob a devout Hindu as he arrives with a packet of biscuit to feed them as part of a charitable act in New Delhi, India, Thursday, January 30, 2014. Hindus believe that feeding monkeys brings them the blessings of Hindu monkey god, Lord Hanuman. (Photo by Saurabh Das/AP Photo) 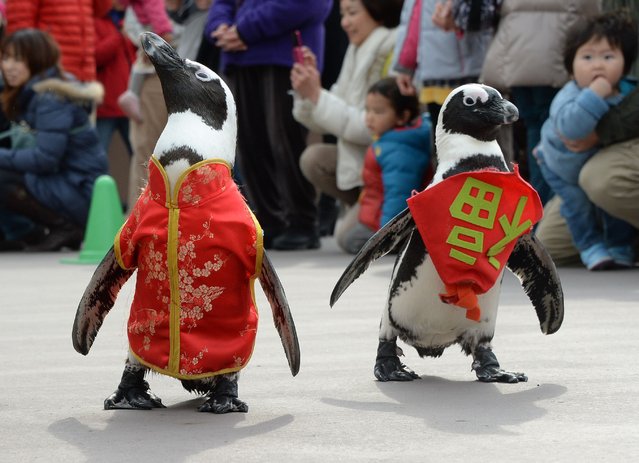 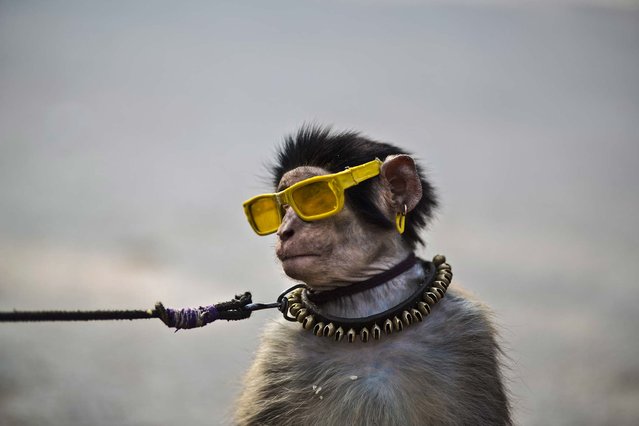 An eight-month-old trained monkey sits on a can next to its owner, holding the leash, as they wait for customers to perform in a park in Islamabad, Pakistan, on January 31, 2014. (Photo by Muhammed Muheisen/Associated Press) 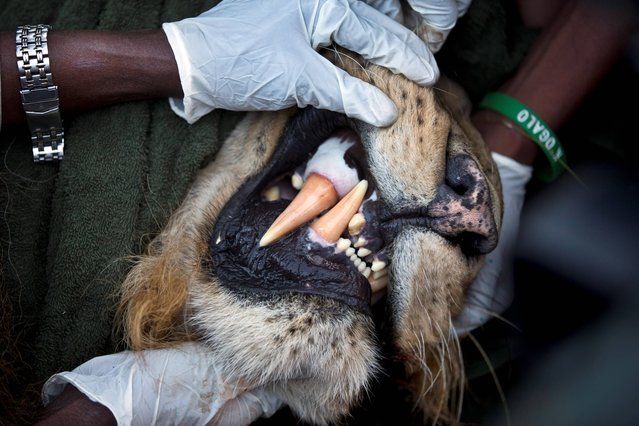 In this photo taken Saturday, Jan. 25, 2014, a team led by the Kenya Wildlife Service (KWS) take measurements of the canine teeth while they prepare to fit a GPS-tracking collar to a tranquilized male lion, in Nairobi National Park in Kenya. Kenyan wildlife authorities are fitting livestock-raiding lions with a GPS collar that alerts rangers by text message when the predators venture out of Nairobi National Park, enabling the rangers to quickly move to the areas where the lions have encroached and return the animals to the park. (Photo by Ben Curtis/AP Photo) 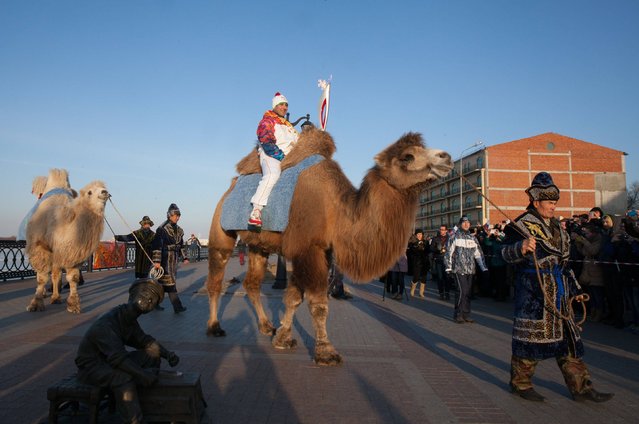 In this photo taken on Sunday, January 26, 2014 and provided by Olympictorch2014.com, an Olympic torch bearer Dmitry Slaschev, top, rides a camel holding an Olympic torch during the torch relay in the southern Russian city of Astrakhan. The relay for the Sochi Winter Games, which began on October 7, 2013 in Moscow, will pass through many cities that showcase the historical, cultural and ethnic richness of Russia. (Photo by AP Photo/Olympictorch2014.com) 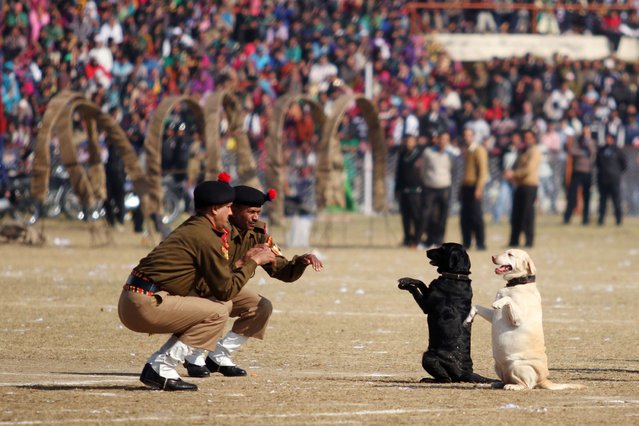 In this photograph taken on January 26, 2014, Indian Border Security Force (BSF) Dog Squad personnel take part in a march during Republic Day celebrations in Jammu. India celebrated its 65th Republic Day with a large military parade in the capital New Delhi and similar events across the country. (Photo by Alok Pathania/AFP Photo) 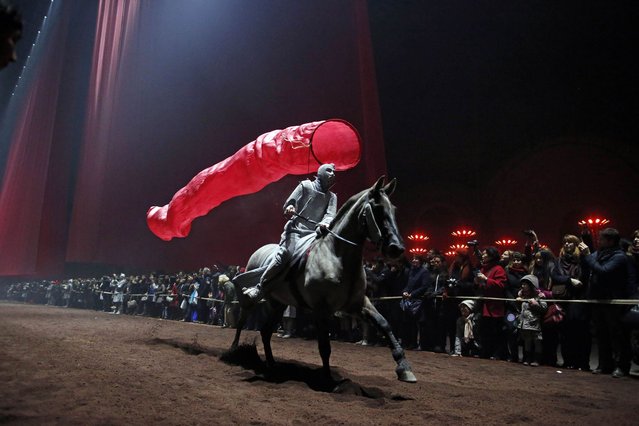 A performer rides a horse during an equestrian show choreographed by Bartabas for the “Nuit de Chine” (Night of China) event at the Grand Palais in Paris, January 27, 2014. This event commemorates the 50th anniversary of the establishment of diplomatic relations between France and China. (Photo by Benoit Tessier/Reuters) 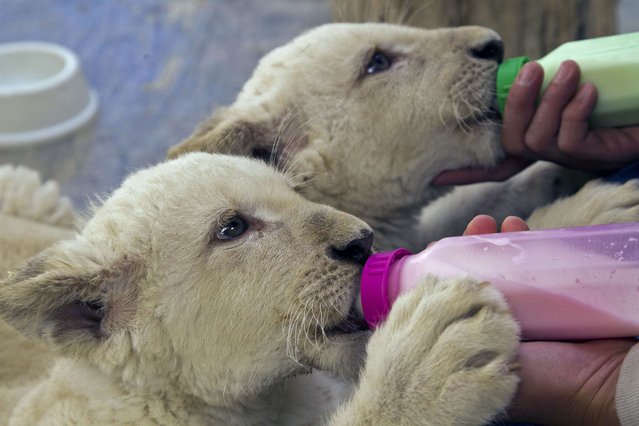 White lion cubs are fed at Guadalajara Zoo, in Guadalajara city, Mexico on January 30, 2014. The two lions were born 90 days ago and will be transfered to new zoos. (Photo by Hector Guerrero/AFP Photo) 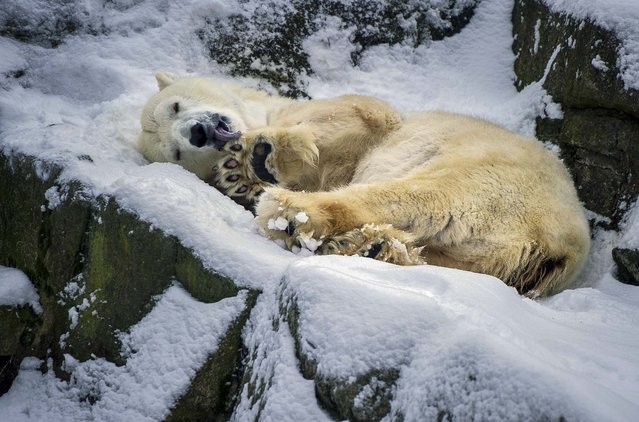 A polar bear enjoys the snow in its compound at the zoo in Berlin, Germany, on January 28, 2014. (Photo by Daniel Naupold/DPA) 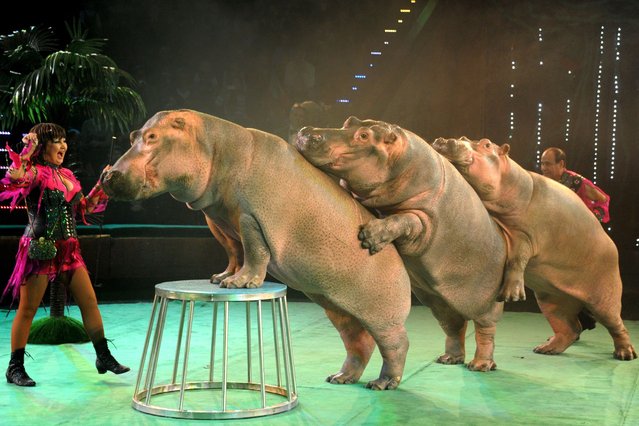 Ludmila (L) and Tofig Akhundov perform with their hippopos in a circus in the Belarus capital Minsk, on January 30, 2014. (Photo by Viktor Drachev/AFP Photo) 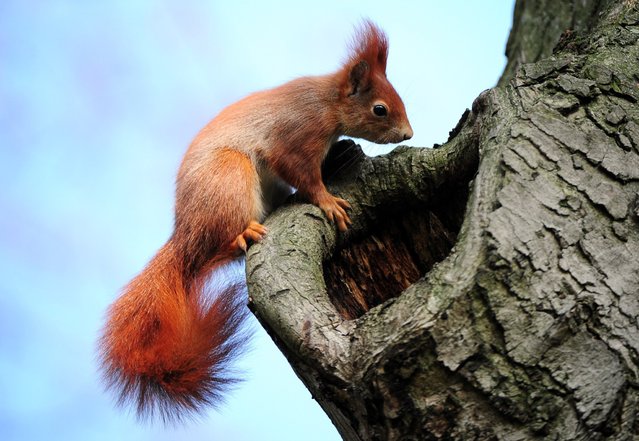 A squirrel sticks its head into a hollow tree on January 30, 2014 at the Palmengarten botanical garden and educational, social, and cultural institution in Frankfurt am Main, western Germany. (Photo by Daniel Reinhardt/AFP Photo/DPA) 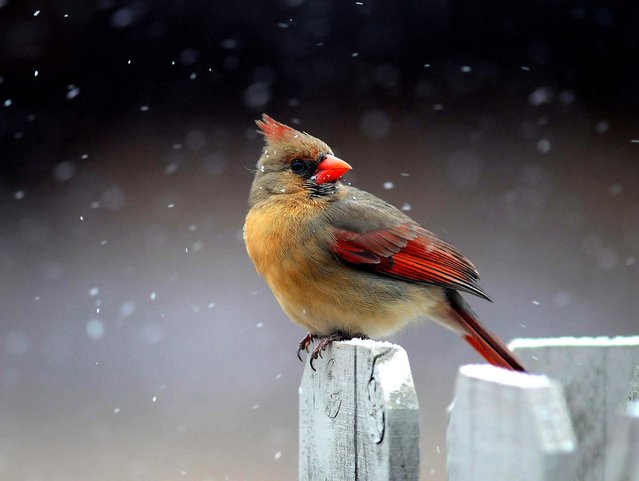 A cardinal perches on a fencepost as snow flurries swirl around it in the first snowfall of the season in Greer, South Carolina, on January 28, 2014. (Photo by Tom Priddy/Spartanburg Herald-Journal)

Siberian tigers after snow fell in their enclosure in the Nyiregyhaza Animal Park in Nyiregyhaza, east of Budapest, Hungary, on January 29, 2014. (Photo by Attila Balazs/MTI) 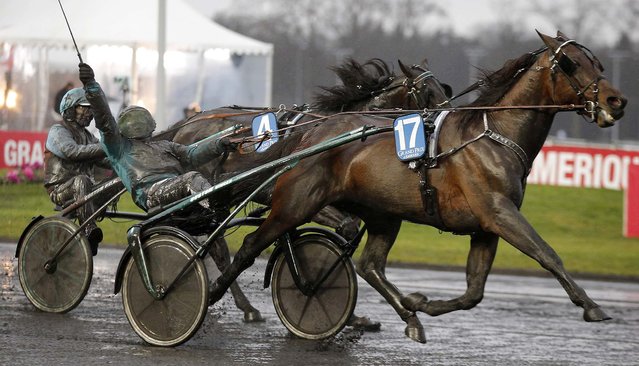