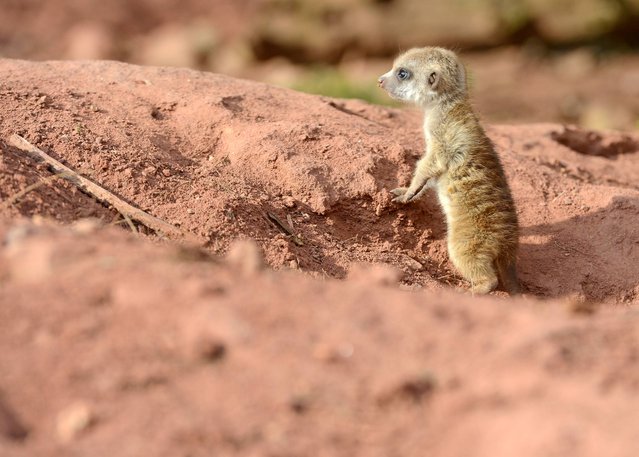 A meerkat cub looks around during its first steps in the outdoor enclosure at the zoo in Erfurt, Germany, Wednesday, March 19, 2014. Three meerkat babies were born on February 21, 2014 at the zoo. (Photo by Jens Meyer/AP Photo) 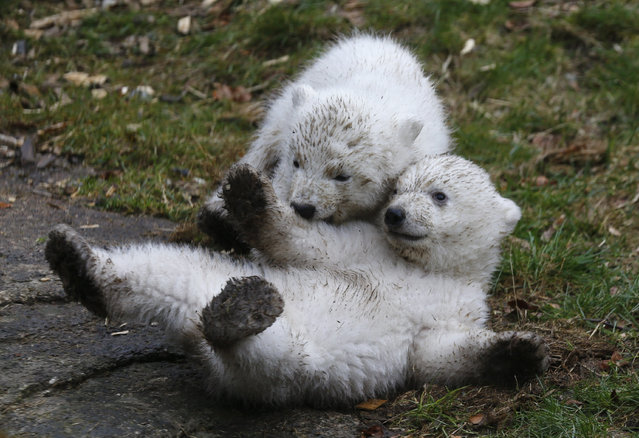 Twin polar bear cubs play outside in their enclosure at Tierpark Hellabrunn in Munich, March 19, 2014. The 14 week-old cubs born to mother Giovanna and who have yet to be named, made their first public appearance on Wednesday. (Photo by Michael Dalder/Reuters) 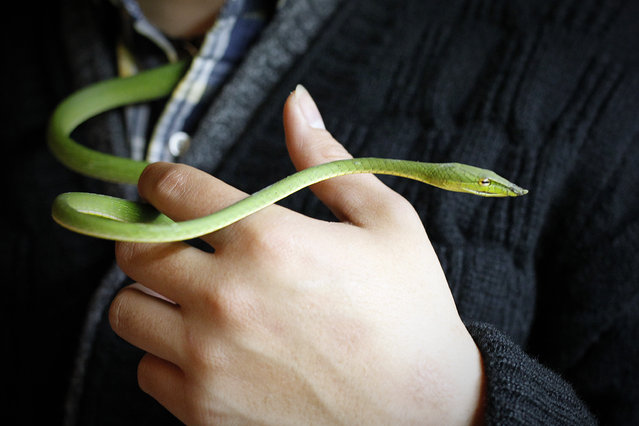 A customer plays with a snake at a pet cafe in Hanoi, Vietnam, March 20, 2014. The cafe named “Pet cafe”, first opened since 2010 in Hanoi, houses up to 40 reptiles such as snakes, lizard, and other animal included squirrels, spiders and porcupines. This is considered the first pet cafe in Hanoi where pets mostly are reptiles instead of cats, dogs or birds like other previous pet cafes. (Photo by Luong Thai Linh/EPA) 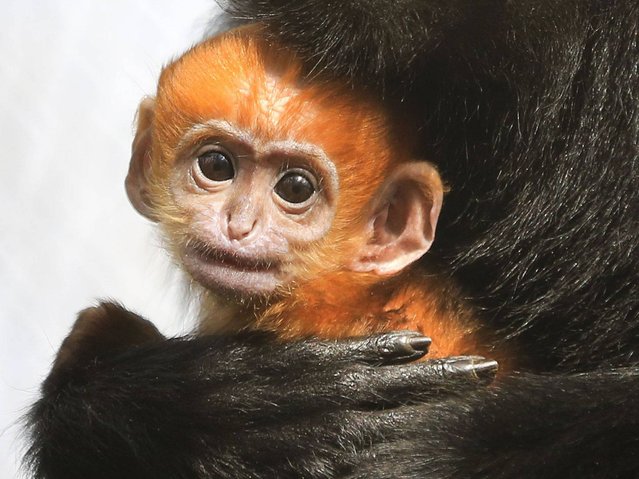 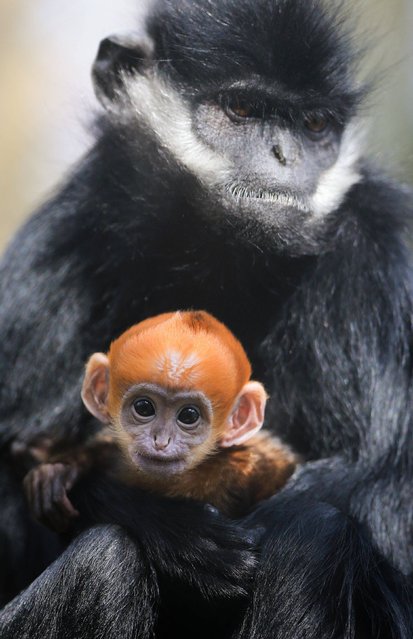 A three week old François' Langur is held by his auntie Grubb as he makes his public debut at Howletts Wild Animal Park near Canterbury, Kent, on March 17, 2014. The newborn is the first ever of its species to be born at the park and is one of the world's rarest primates. (Photo by Gareth Fuller/PA Wire) 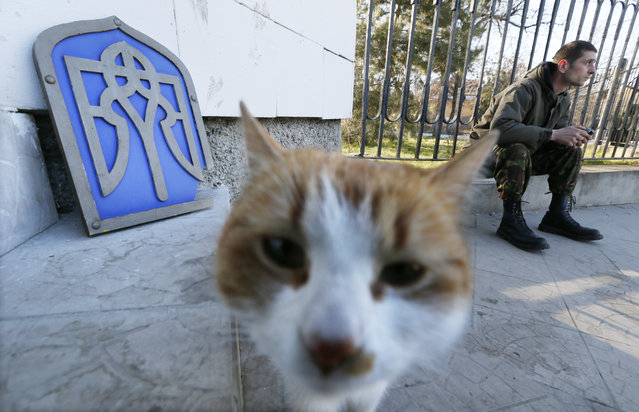 A member of the self-defense forces of Crimea sits near a dismantled coat of arms outside an Ukrainian military base in Simferopol, Ukraine, 21 March 2014. Ukraine's interim Prime Minister Arseniy Yatsenyuk on 21 March in Brussels had signed parts of a highly symbolic deal on closer political ties with the European Union in Brussels, as Russian President Vladimir Putin signed a treaty completing the legal annexation of Crimea. (Photo by Yuri Kochetkov/EPA) 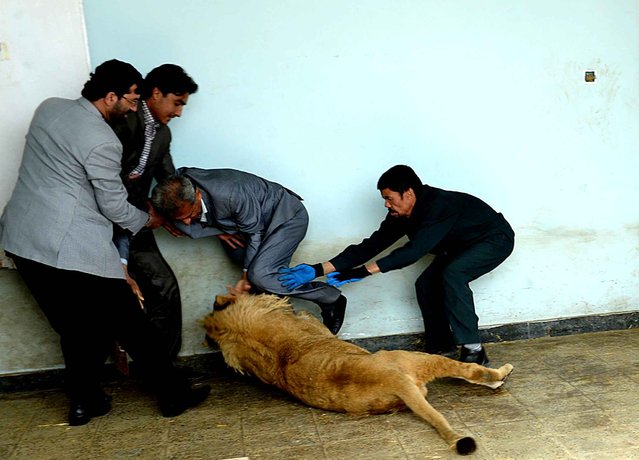 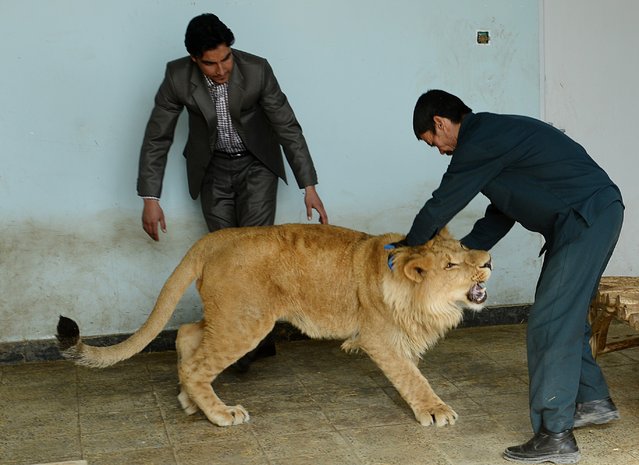 Afghan zookeeper Qurban Ali (R), 40, plays with male lion Marjan at Kabul Zoo in Kabul on March 18, 2014. Staff at Kabul Zoo unveiled its new star attraction Marjan the lion, who lived on a private rooftop in the city until being rescued by animal welfare officials in October 2013 from a businessman who reportedly paid $20,000 for the animal. Marjan is named after a half-blind lion who lived at Kabul Zoo and became a symbol of national survival after living through coups, invasions, civil war and the hardline Taliban era before dying in 2002. (Photo by Shah Marai/AFP Photo) 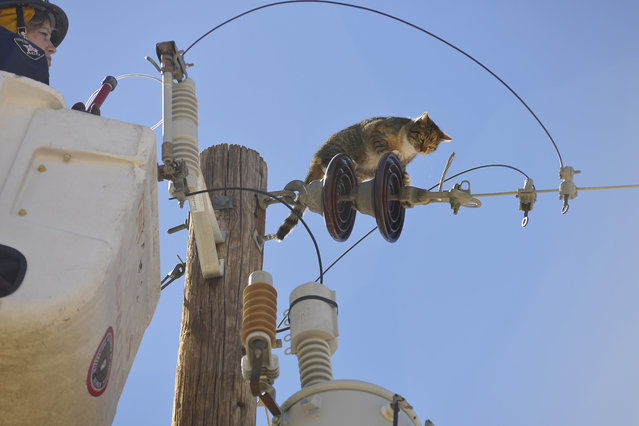 In this photo taken on Monday, March 17, 2014, Mary Lu Ward, left, of the Las Cruces Animal Control, calls to Athena as she was lifted in a utility bucket by El Paso Electric in Las Cruces, N.M. Ward successfully rescued the cat, who had been stuck on top of the electrical pole for three days after possibly being chased by Coyotes. (Photo by Carlos Javier Sanchez/AP Photo/The Las Cruces Sun-News) 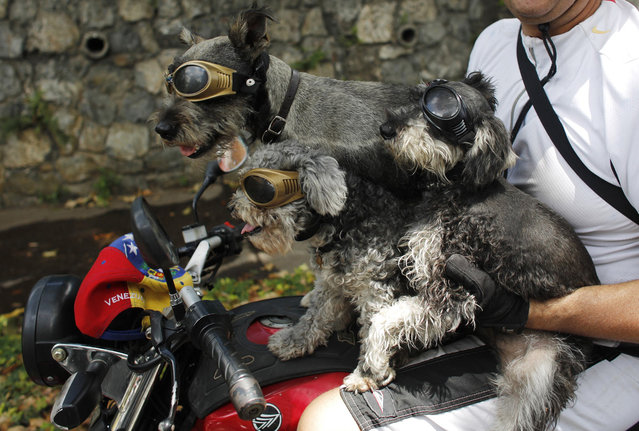 A man and his dogs sit on a motorcycle during an anti-government march in Caracas March 16, 2014. (Photo by Tomas Bravo/Reuters) 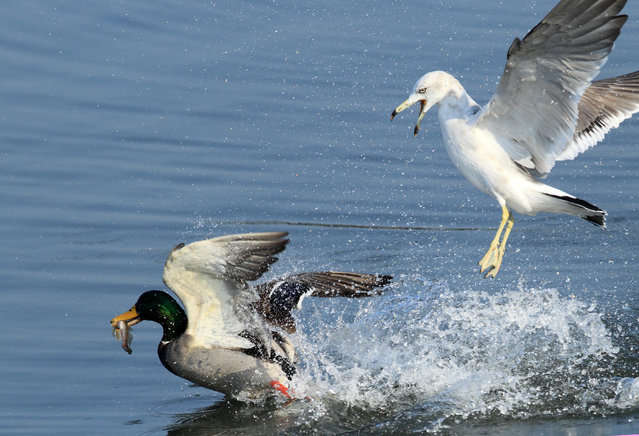 A seagull chases a mallard duck at Gyeongpo Lake in Gangneung, Gangwon Province, South Korea, March 17, 2014. The seagull was apparently trying to snatch the duck's fish. (Photo by EPA/YONH) 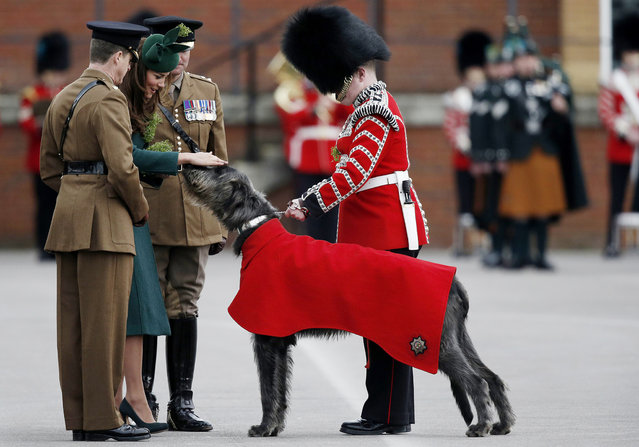 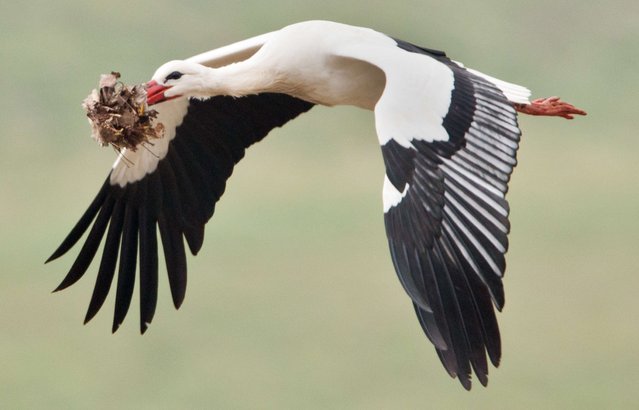 A white storks transports material to build a nest near Biebesheim am Rhein, western Germany, on March 18, 2014. (Photo by Boris Roessler/AFP Photo/DPA) 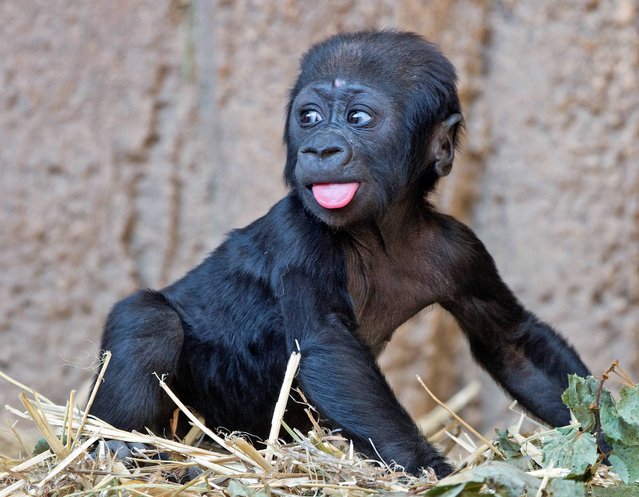 Baby gorilla Jengo relaxes in his enclosure at the zoo in Leipzig, Germany, Thursday, March 20, 2014. The baby gorilla was born on December 2, 2013. (Photo by Jens Meyer/AP Photo) 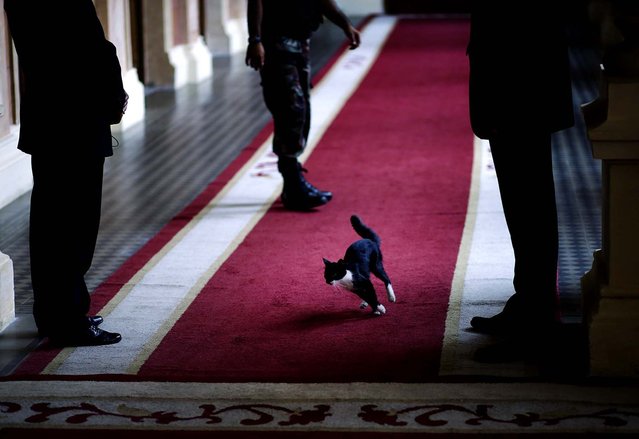 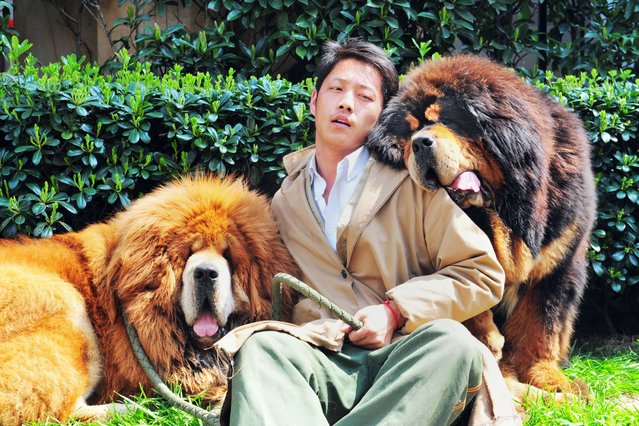 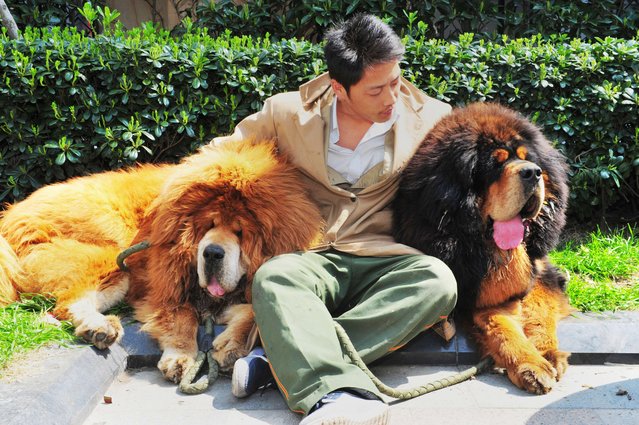 This picture taken on March 18, 2014 shows an unidentified man posing for a photo with two Tibetan mastiffs after they were sold at a “luxury pet” fair in Hangzhou, in eastern China's Zhejiang province. One of the Tibetan mastiff puppies (L) was sold in China for almost two million USD, a report said on March 19, in what could be the most expensive dog sale ever. (Photo by AFP Photo) 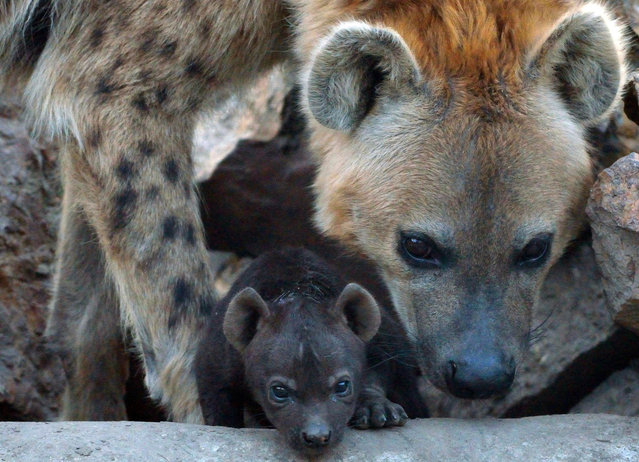 A newly born spotted hyena (Crocuta crocuta) baby is seen with its mother at the Animal Garden in Szeged, Hungartat the Serbian border on March 17, 2014. (Photo by Csaba Segesvari/AFP Photo) 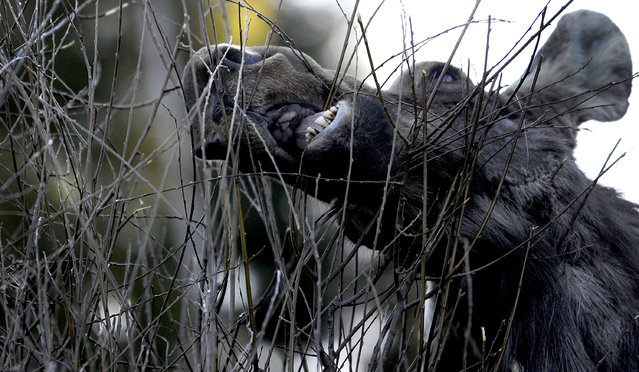 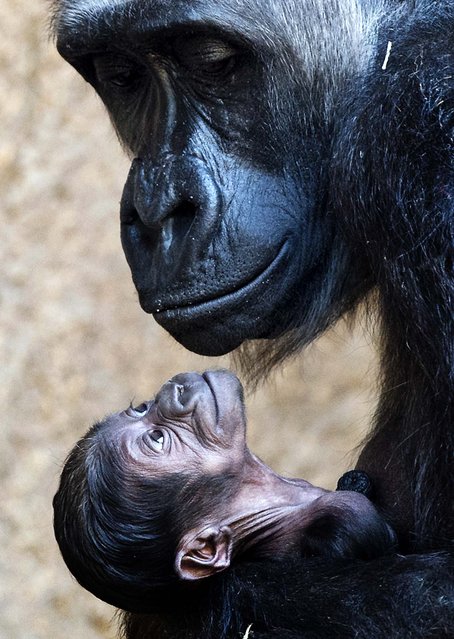 Gorilla mother Kumili arms her newborn at the zoo in Leipzig, central Germany, Thursday, March 20, 2014. The baby gorilla was born during the night between 10 and 11 March 2014 and its s*x is still unkown. It's the second gorilla baby born within four month in this monkey group. (Photo by Jens Meyer/AP Photo) 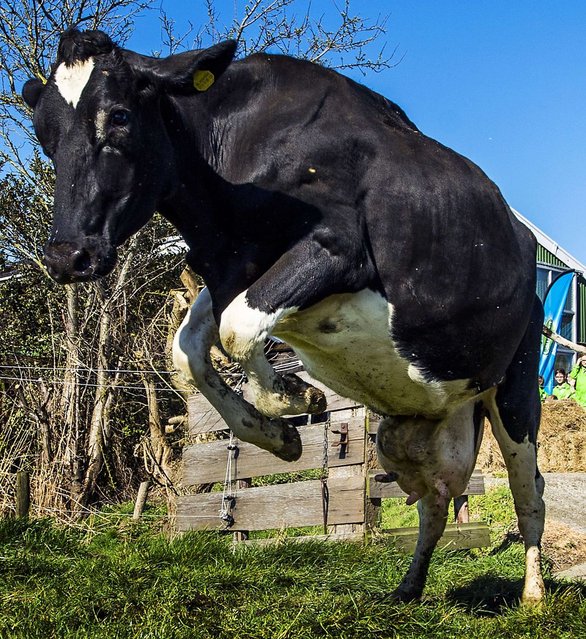 A cow runs and prances as she enters a meadow of a farm in Westzaan, The Netherlands, on March 20, 2014, after staying inside a stable during the winter. (Photo by Remko De Waal/AFP Photo/ANP) 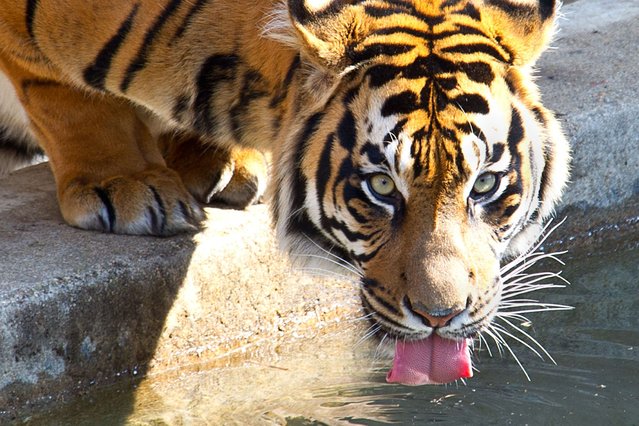 Kavi, a male Sumatran Tiger, takes a drink from the pool in his enclosure March 20, 2014 at the Smithsonian's National Zoo in Washington, DC. Balmy temperatures are making for a great first day of Spring. (Photo by Karen Bleier/AFP Photo) 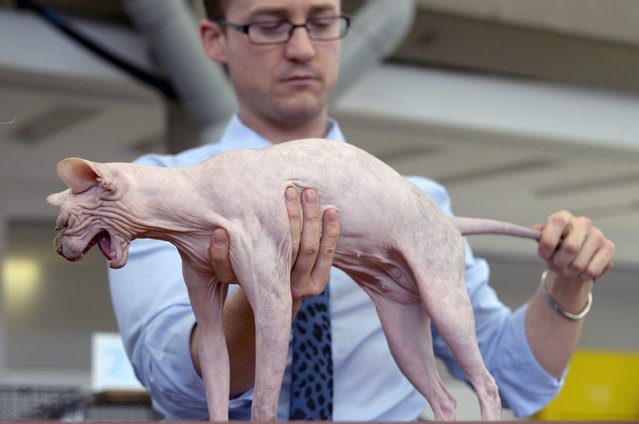 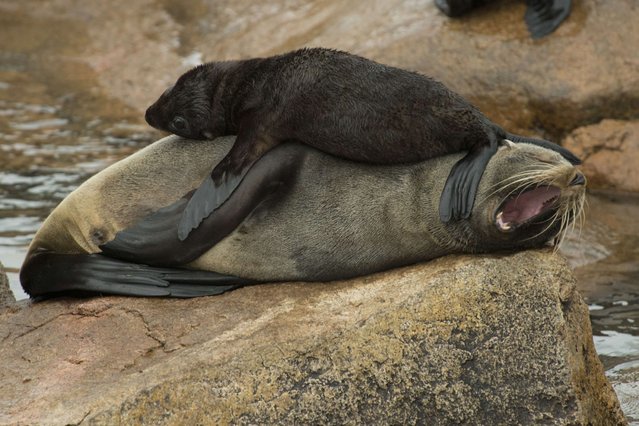 A fur seal pup is seen on top of its mother at Isla de Lobos, a small island located about 8 km off the coast of Punta del Este, 140 km east of Montevideo, on March 19, 2014. A slaughterhouse operated in the island until 1991, and since then is the main reserve in South America to fur seals (Arctocephalus australis) and sea lions (Otaria flavescens). (Photo by Pablo Porciuncula/AFP Photo) 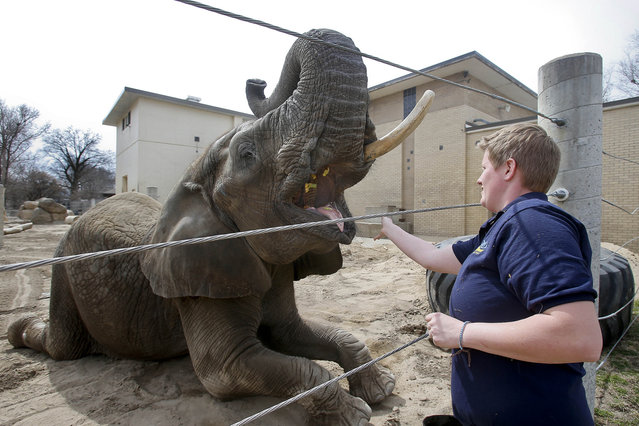 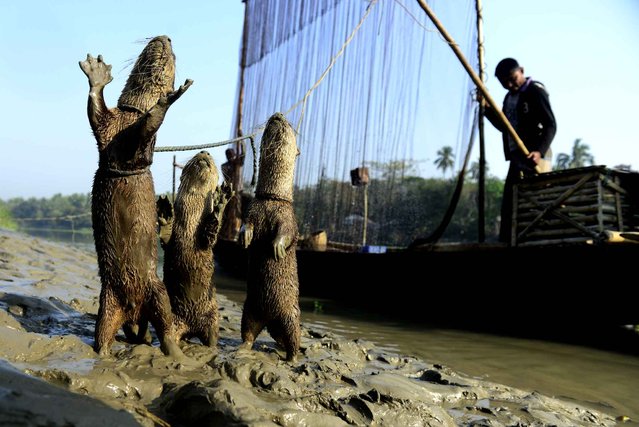 Bangladeshi fisherman feed their otters as they catch fish in Narail some 208 kms from Dhaka on March 11, 2014. The fishermen are using a rare technique that relies on coordination between man and trained otters, a centuries-old fishing partnership that has already long died out in other parts of Asia. (Photo by Munir Uz Zaman/AFP Photo)
Edit Del
22 Mar 2014 14:22:00, post received 0 comments
Publication archive:
←   →
Popular tags:
All tags
Last searches: