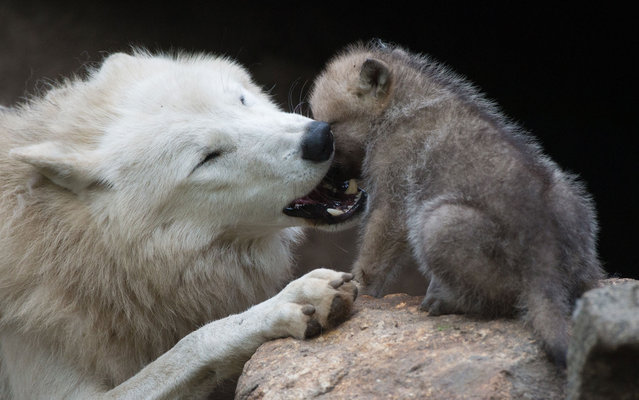 A wolf plays with a one-month-old puppy in its enclosure of Berlin’s Zoo, on May 31, 2013. (Photo by Johannes Eisele/AFP Photo) 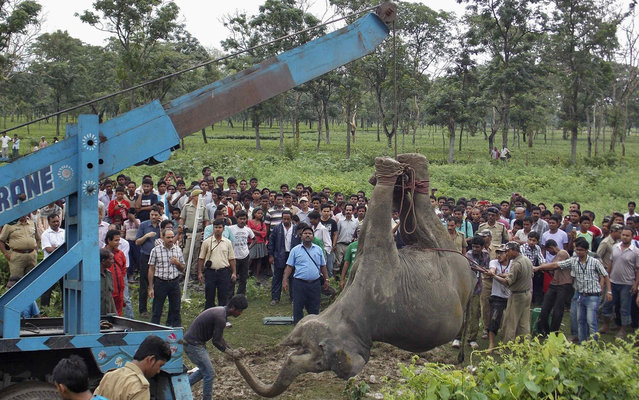 A crane removes the carcass of a female elephant near a railway track at Banarhat village, in the eastern Indian state of West Bengal, on May 30, 2013. Two adult female elephants and one calf died on Thursday after they were hit by a passenger train while crossing a railway track, forest officials said. (Photo by Reuters/Stringer) 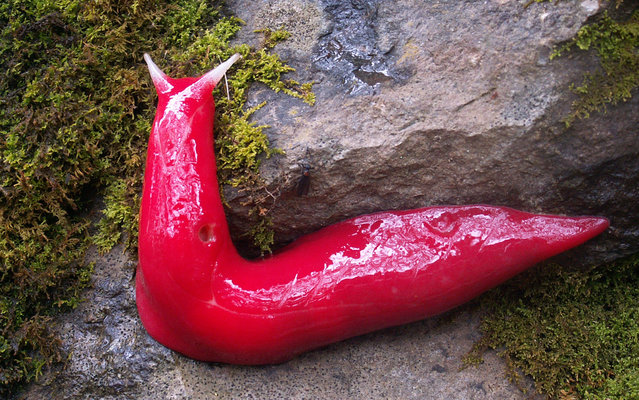 It would seem to be something you'd see only in a cartoon or at a Phish concert, but according to park rangers in New South Wales, Australia, dozens of giant, fluorescent pink slugs have been popping up on a mountaintop there. The eight-inch creatures have been spotted only on Mount Kaputar, a 5,000-foot peak in the Nandewar Range in northern New South Wales. Scientists believe the eye-catching organisms are survivors from an era when Australia was home to rainforests. A series of volcanoes, millions of years of erosion and other geological changes “have carved a dramatic landscape at Mount Kaputar”, the park service wrote on its Facebook page, and unique arid conditions spared the slugs from extinction. (Photo by Michael Murphy/AFP Photo/NSW Environment Office) 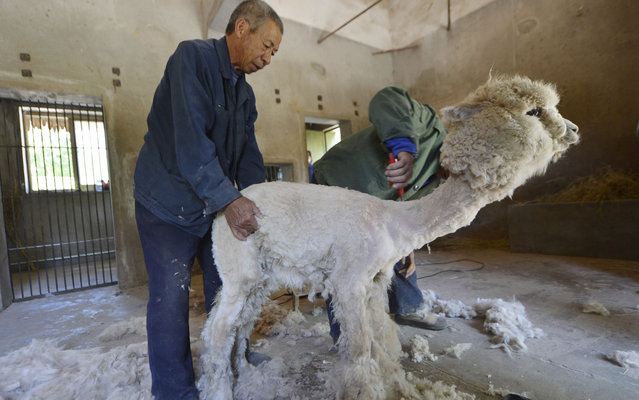 Farmers shear an alpaca in its enclosure at a Zoo in Shijiazhuang, Hebei province on May 30, 2013. (Photo by Reuters) 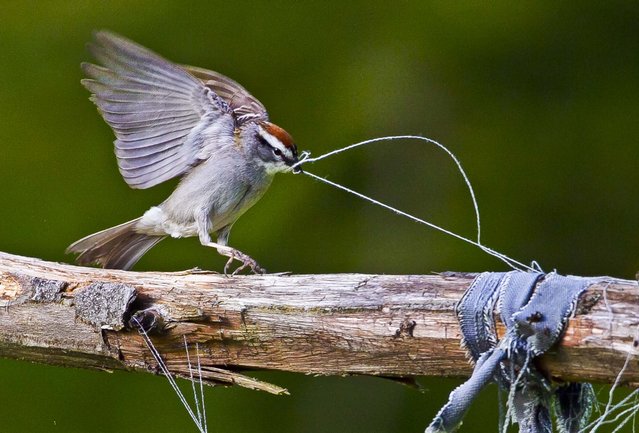 A chipping sparrow tugs on some loose threads of weathered clothing while gathering nest-building materials in a garden in Freeport, Maine, on May 30, 2013. (Photo by Robert F. Bukaty/Associated Press) 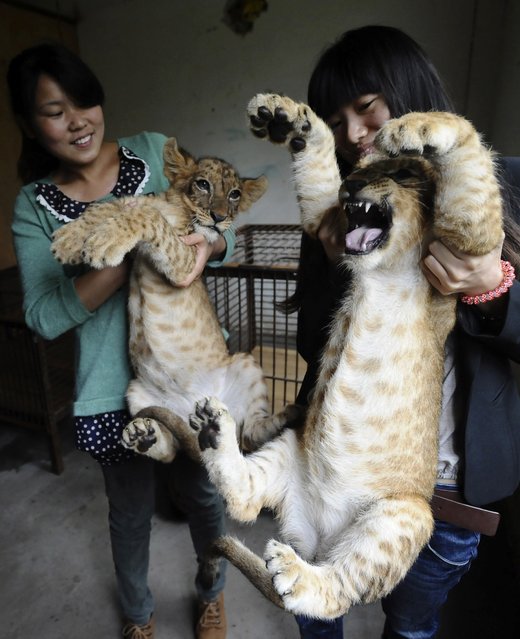 Staff hold lion cubs during a media event at a Zoo in Wuhan, Hubei province, May 29, 2013. The Zoo said tourists could visit the four-month-old cubs starting from International Children's Day on June 1, 2013. (Photo by Reuters/Stringer) 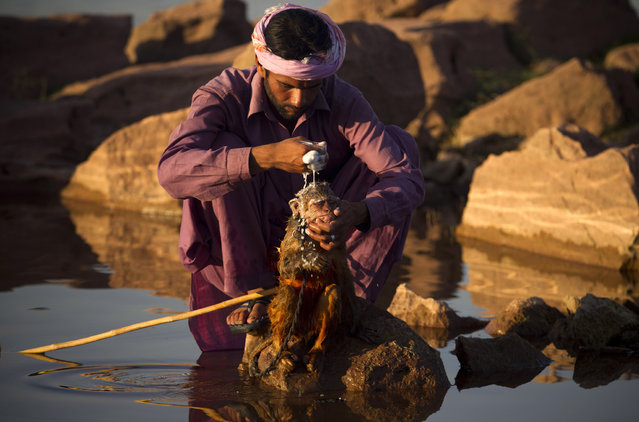 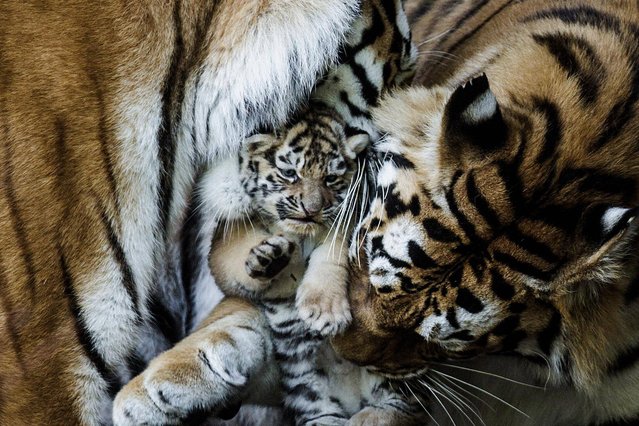 Six Amur Tiger cubs born in Copenhagen Zoo in Denmark late April 2013, came out into the open and could be seen by the public for the first time Thursday, May 30, 2013. The six cubs are from two litters born in late April by two tiger mothers. (Photo by Simon Fals/AP Photo/Polfoto) 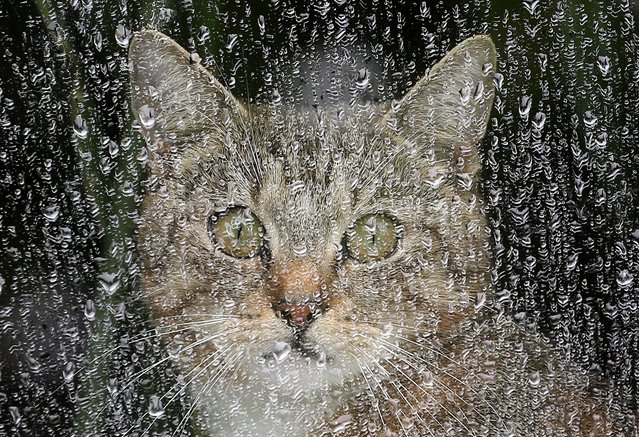 A cat sits behind a rain covered window on a rainy day in Berlin, Germany, on May 31, 2013. (Photo by Wolfgang Kumm/Associated Press) 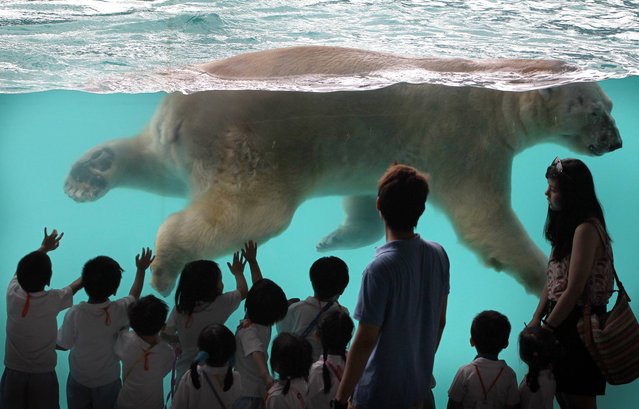 Inuka, the first polar bear born in the tropics, swims in his new enclosure at the Singapore Zoo on Wednesday, May 29, 2013 in Singapore. Modeled closely after the arctic habitat, the enclosure helps replicate the chilly climate of the arctic by including an ice cave, and a large pool filled with giant ice blocks. These are part of the Wildlife Reserves Singapore's efforts in providing visitors greater knowledge of the natural world. (Photo by Wong Maye-E/AP Photo) 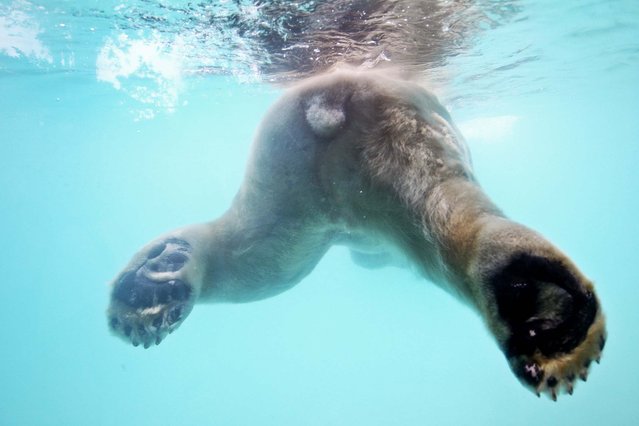 Inuka swims in his new enclosure at the Singapore Zoo, on May 29, 2013. (Photo by Wong Maye-E/Associated Press) 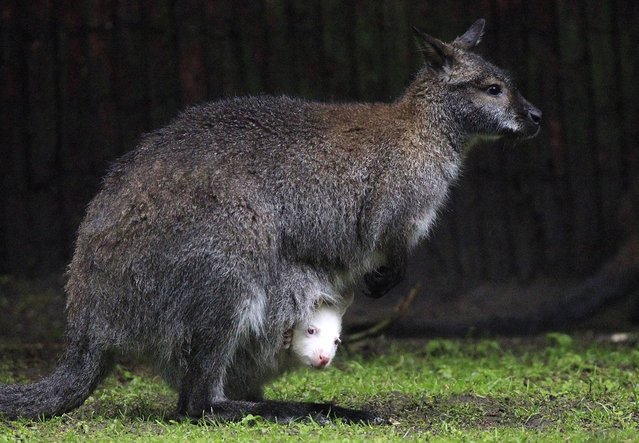 A baby albino kangaroo looks out of it's mothers pouch at the zoo in Duisburg, Germany, Wednesday, May 29, 2013. Albino kangaroos in wildlife have a probability of 1 to 20,000. The same mother had an albino baby last year which was caught by a fox and died. (Photo by Frank Augstein/AP Photo) 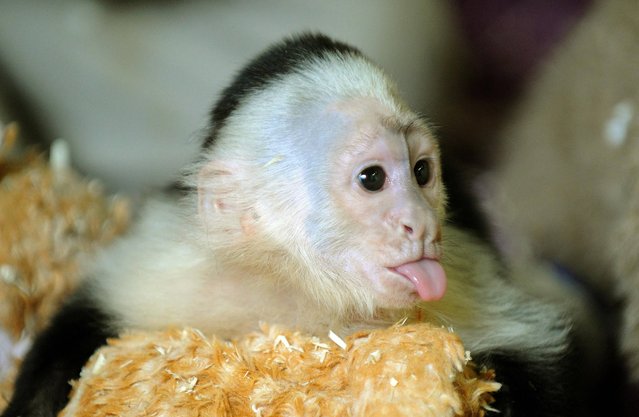 Canadian singer Justin Bieber's former pet the capuchin monkey named Mally stretches out its tongue in its quarantine room at the new home in an animal park near Hodenhagen, northern Germany, Friday, May 31, 2013. Mally was seized by German customs on March 28 when the 19-year-old Canadian pop star failed to produce the required vaccination and import papers after landing in Munich for a European tour. (Photo by Holger Hollemann/AP Photo/Dpa) 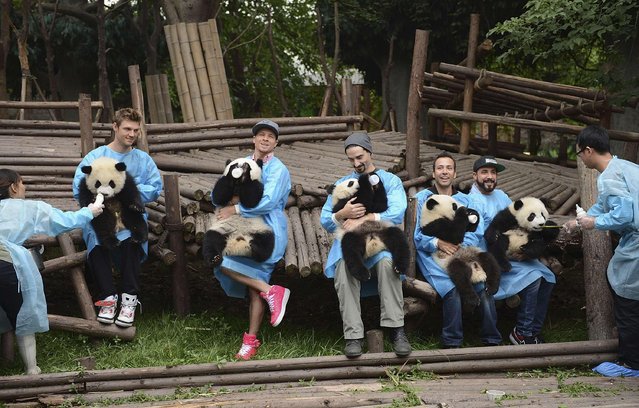 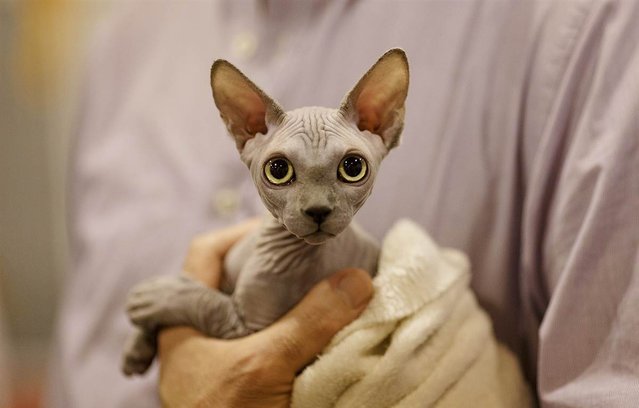 A sphynx cat looks on at the “Spring International Dogs” exhibition on May 26 in Madrid, Spain. (Photo by Pablo Blazquez Dominguez/Getty Images) 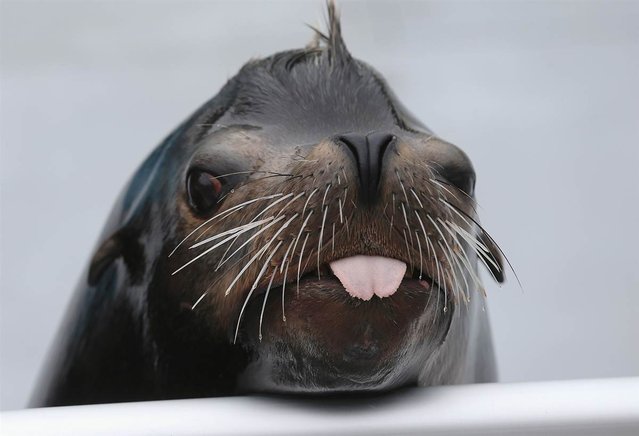 Sea lion Osborne looks toward the crowd during a press preview before the reopening of the New York Aquarium in Coney Island on May 24, 2013 in Brooklyn. (Photo by Mario Tama/Getty Images) 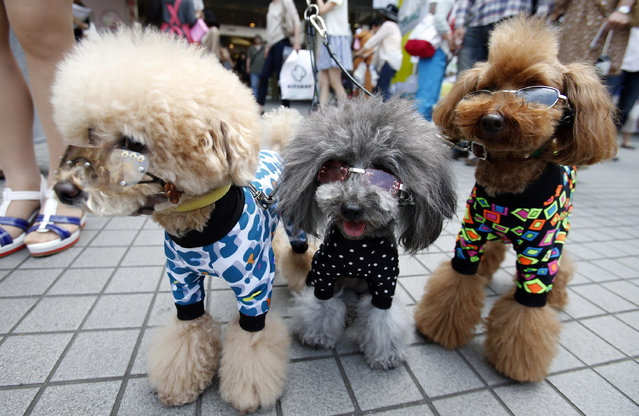 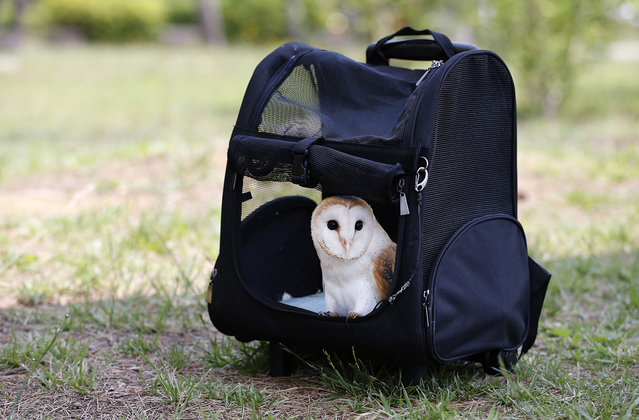 Owl “Baron” stays inside a pet carrier leaving the window open at a Tokyo park Sunday, May 26, 2013. (Photo by Shizuo Kambayashi/AP Photo) 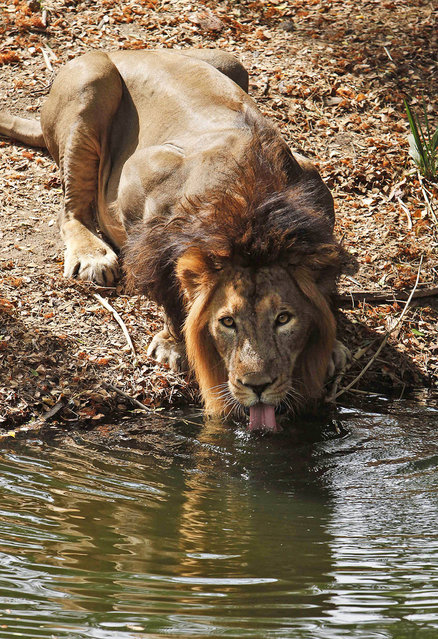 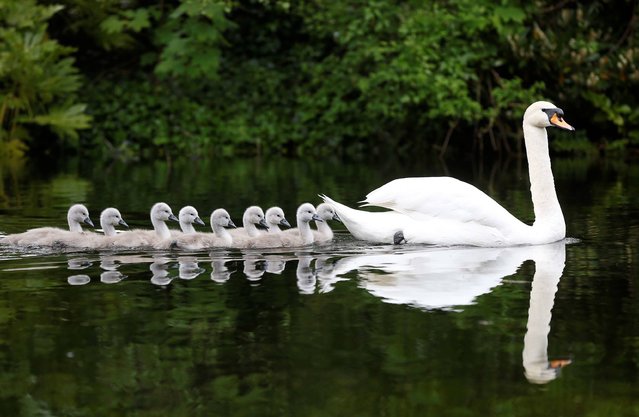 A parent Swan pictured here leading her Cygnets out for a paddle in the pond of St. Stephen's Green, Dublin, on May 30, 2013. (Photo by Robbie Reynolds) 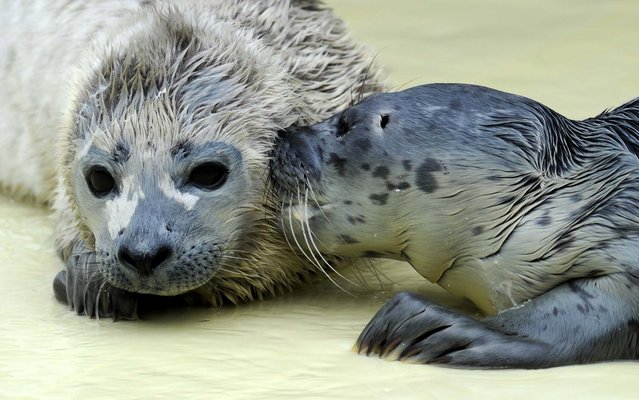